Love in the inbox: the epistolary pleasures of the Tom Hanks–Meg Ryan rom-com. 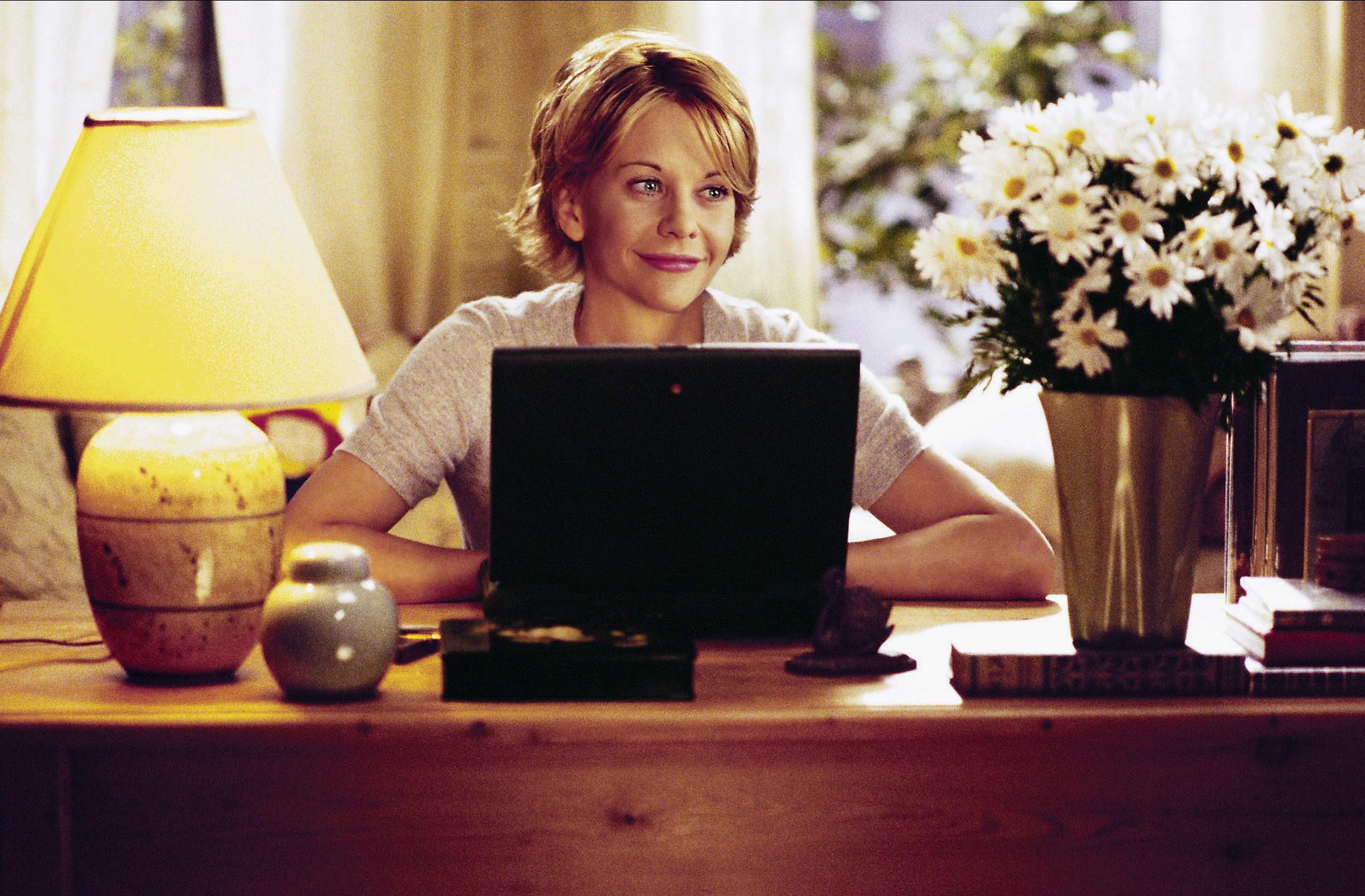 You’ve Got Mail, directed by Nora Ephron, available to buy or rent on all major streaming platforms

Wherever you are now, please know that I have grown uncomfortable with the still-fresh horror of this type of opening—the fumbling for some calming language in restless times. I will simply say that I have begun to suspect there is a goodness slowly making its way toward me, likely waylaid or distracted by chaos, as I have sometimes been. Maybe you suspect there is a goodness crawling in your direction as well. In the earliest days of the pandemic, when some of us were still optimistic and dreaming of autumn’s possibilities, I started a pen-pal group with strangers. People who lived alone and who, like me, had anxiety disorders that informed their engagement with the world. Uncertain people in times trembling with greater uncertainty. In lieu of words, we send each other images. Or songs. We don’t burden one another with hopes or wishes, just here’s something that made me want to be alive today. For the occasions that language simply cannot rise to, I will take some borrowed beauty, generously pulled from someone else’s world.

This is one of a great many reasons I have long been in love with email, and have fallen even more in love with it now. This rejuvenated affection sent me, once again, tumbling into the arms of You’ve Got Mail, the 1998 romantic comedy / two-hour America Online commercial starring Tom Hanks and Meg Ryan. The film has a series of predecessors: the 1937 Hungarian play Parfumerie was the inspiration for the 1940 film The Shop Around the Corner, which was adapted into the 1949 Hollywood musical In the Good Old Summertime, which begat the 1963 Broadway musical She Loves Me. In all of these earlier versions, the central premise is that two anonymous pen pals fall in love through letters, unaware that their epistolary beloved is a person with whom they have a relationship in real life, sometimes antagonistic. 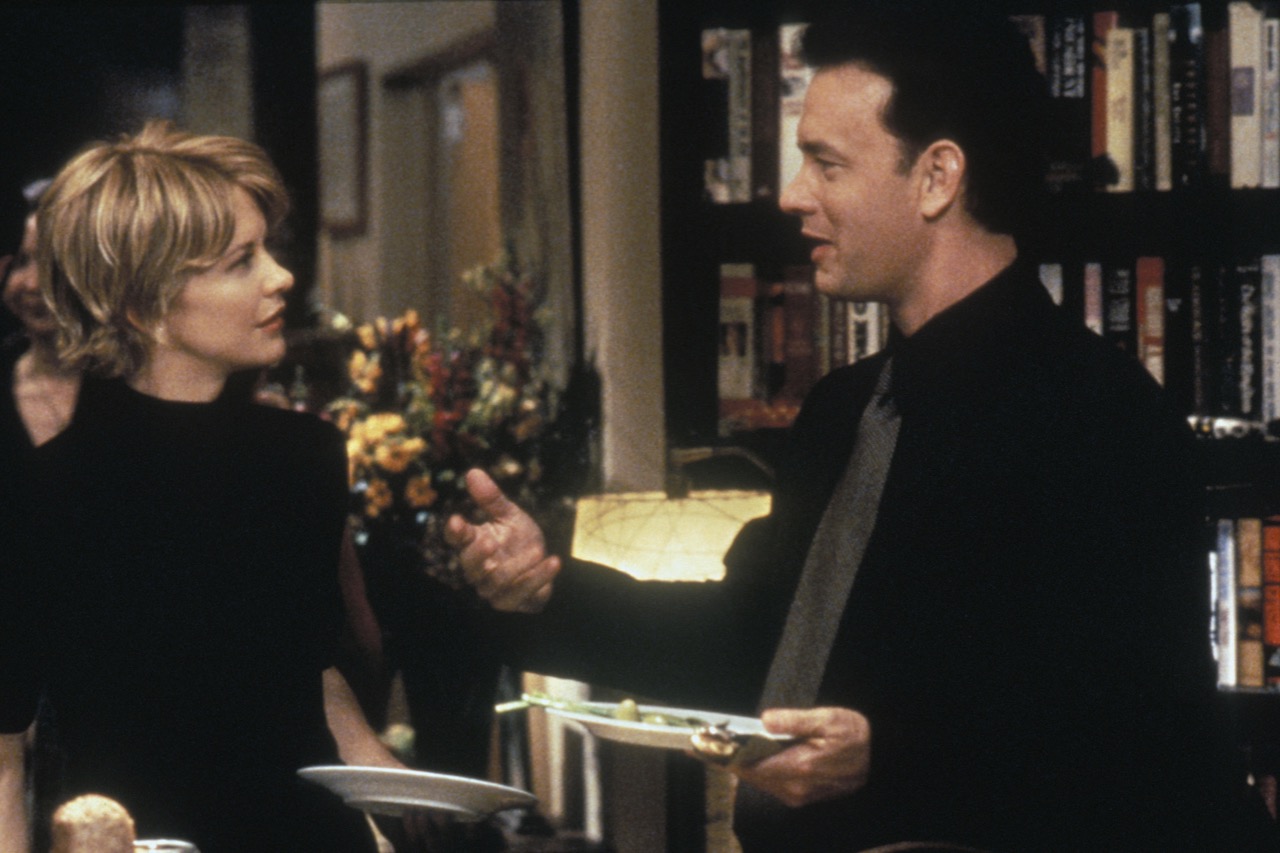 You’ve Got Mail updates this, with email, during a time when email was still a novel and exciting way to communicate, and not the burden it is often seen as now. Joe Fox (Hanks), a swaggering big-box bookstore owner, opens up a new branch of his emporium on the Upper West Side, where a small, second-generation bookshop owned by Kathleen Kelly (Ryan) is struggling to stay afloat. Kathleen’s Shop Around the Corner—its name an ode to Ernst Lubitsch’s 1940 film—eventually closes, swallowed by the Fox Books behemoth. All the while, Kathleen and Joe, who met pseudonymously in an AOL chat room, are conducting an increasingly intimate email correspondence—which continues even as they squabble over business matters IRL, as their separate romantic relationships fall apart, as Kathleen descends into grief over the shuttering of her store. 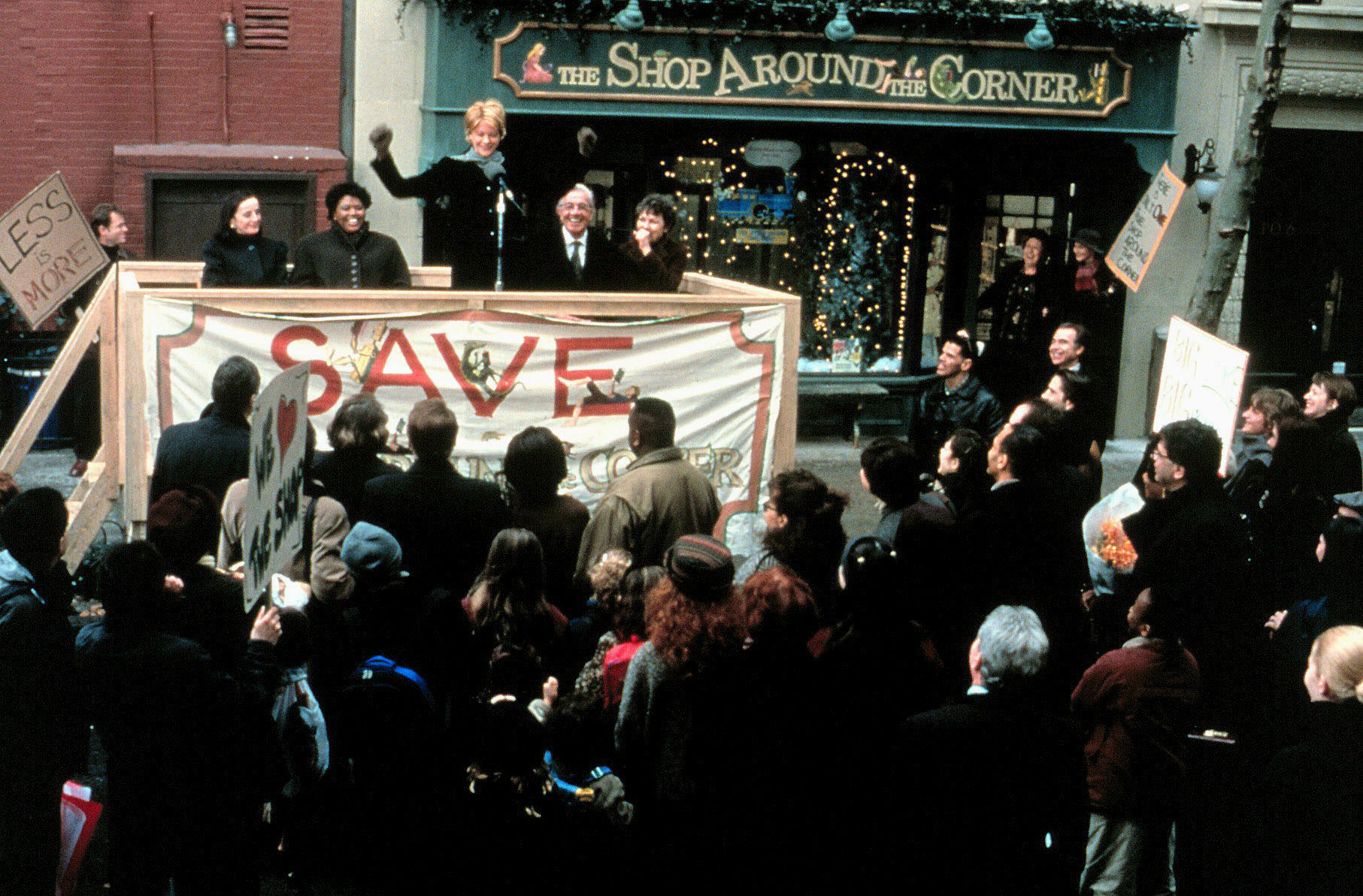 If there is to be a villain in this story, it has to be Joe Fox. Even near the end, when he and Kathleen develop a fondness for each other in real life, while still emailing and while Joe, who now knows that she is his AOL pen pal, keeps his online identity hidden. Even right at the end, when it is revealed that it was Joe behind the computer the whole time, and Kelly leaps with joy. There are not many sympathetic characters in the film beyond Kathleen, who is (physically!) shushed by (multiple!) men, and who seems mostly at the mercy of cruel circumstances. But even when his romance with Kathleen is fulfilled, it is still a challenge to feel too warmly toward Fox. 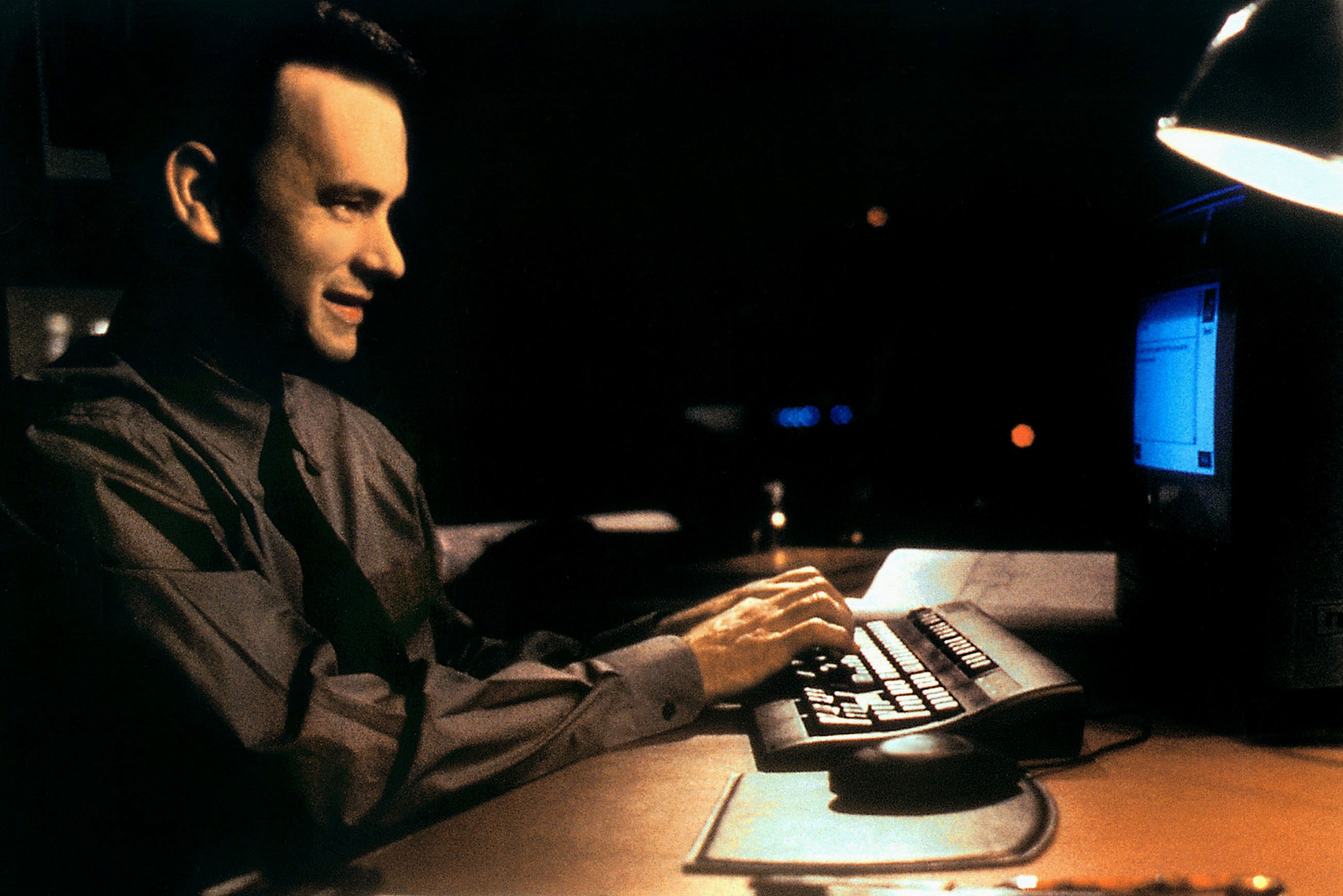 Yet, in a rewatch, I found myself relating to Joe Fox. Not to the corporate villain and not to the earlier adopter of catfishing, who carried on the email ruse for a touch too long. But to the other Joe Fox—the one who emailed because he is overly sentimental about language, or because he knew that he could build himself up so high in a person’s imagination that the real, flawed version of him might only be a gentle letdown.

Desire can tell on all of us, eventually. Not always, but enough times. The right light falls across the face of one of your friends during a long and lonely week, and the mind opens a new door. The hounding of a longtime rival shifts into the pursuit of romance, despite the denial—despite Fox’s protesting, briefly thinking this can’t be happening, but of course it can. Desire has a key for every lock, if a person allows for it. Sometimes, the initial resistance is the magic itself, as you convince yourself that you cannot possibly be feeling what you’re feeling even though you certainly are. 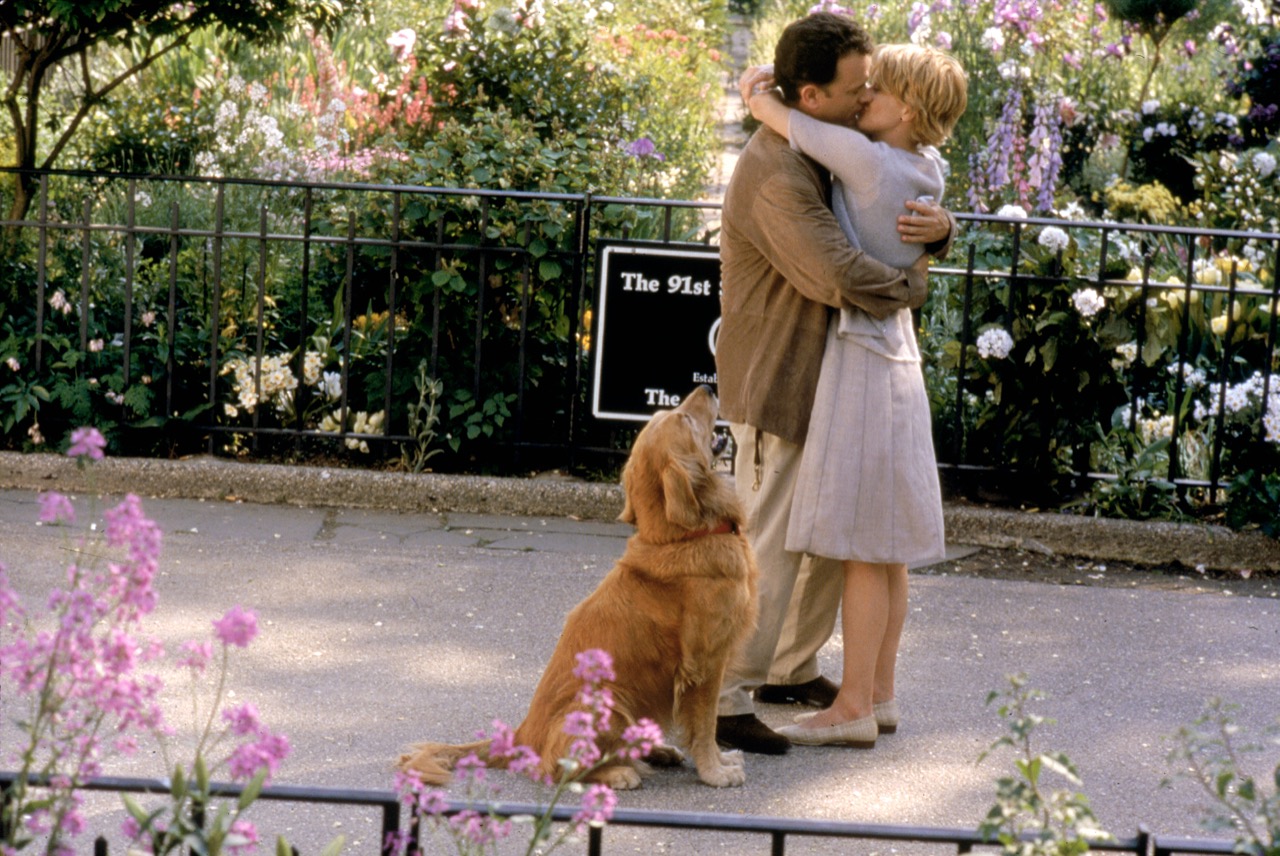 The most worthwhile tension in You’ve Got Mail lies in the simple but pure ecstasy of receiving an email from a person you are excited about. I don’t text as well as I’d like, and I don’t respond much to DMs. Like Fox, I am too sentimental, too romantic to give into brevity. A big part of me prefers courtship via long, expansive emails. I say courtship and don’t mean only romance, but also new friendships, or old friendships. Anyone who might be willing, for example, to hear how, at sunset, the sky in Columbus this summer turned the colors a person might turn while holding their breath, before it blew out streams of endless black. Now tell me about the sky where you are, reader. So many people I miss are far away, and even the ones who aren’t feel distant. The email exchange as a true exchange, now and especially now. 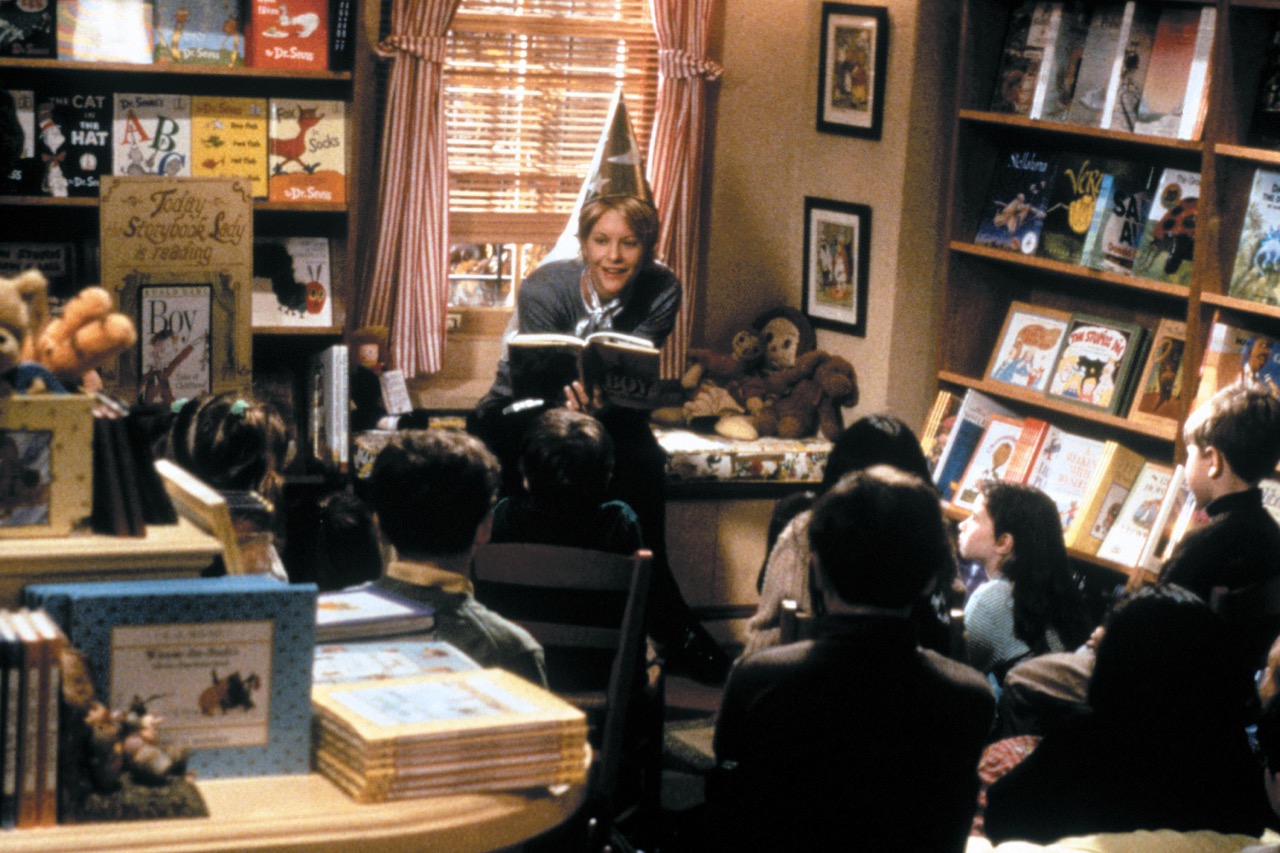 Long live the parts of You’ve Got Mail that refurbish the excitement of our sometimes-misguided yearnings. Long live Meg Ryan! But not the Meg Ryan being shushed by lovers or suitors! Not the Meg Ryan weeping while holding a picture of her dead mother! But always the Meg Ryan on her toes, bouncing and gleefully throwing punches at the air on the day it seemed like her shop might survive. And, yes, long live emails, though I suppose I could do without the lengthy missives from CEOs now discovering racism, and the check-ins from brands, and offers of whatever percent off. Long live the heart’s impossible surge when, carved into a tree within that useless forest of an inbox, you spot a name you have hoped to see. Long live the slow, small openings that make up the thrill of an email exchange becoming more intimate. The stories of our parents, the way a favorite corner of a bedroom looks from our beds, a playlist, a photo of a flower picked along a lonely walk. Tiny revelations that create the conditions under which one might be susceptible to letting desire win again, once and for all. Now is the time, but it has always been the time. Even as I gradually get worse at openings, I hope this finds you.