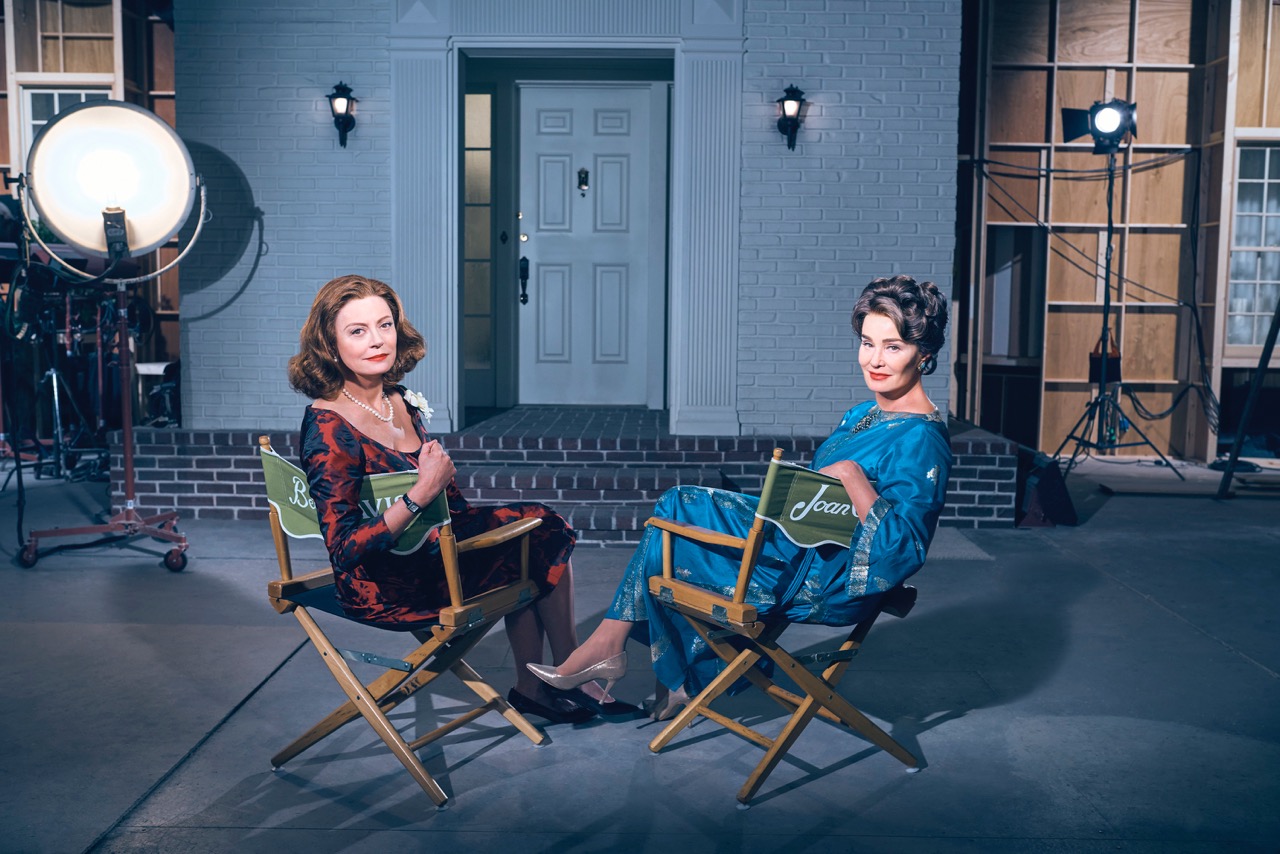 With Feud: Bette and Joan, his eight-part series on FX, the television writer, producer, and director Ryan Murphy becomes his generation’s Douglas Sirk by way of Rainer Werner Fassbinder, a brilliant queer critic of the very system he employs—and that employs him. Along with a keen sensitivity to difference of all stripes (as evidenced by American Horror Story and Glee), Murphy has an innate understanding of our nation’s troubled, fascinating, and ultimately twisted relationship to women. Indeed, we watched his extraordinary American Crime Story: The People v. O.J. Simpson as much for the primarily male judicial system’s takedown of lead prosecutor Marcia Clark as for how race played out in the proceedings.

In Feud, which is based on a feature-length script by Jaffe Cohen and Michael Zam that Murphy helped expand into a series, the two stars, Joan Crawford (Jessica Lange) and Bette Davis (Susan Sarandon), have already been taken down by the Hollywood studio system that more or less made them, not only professionally but personally—not that there’s much of a difference for these two legends, who lived to be looked at.

Their rivalry was well known. They competed over parts, men, and visibility. But now it’s the early 1960s, and the women, both in their fifties, have outlived their popularity, not to mention the genre in which they’d made their respective names: all those “women’s pictures” from the 1930s and 1940s. 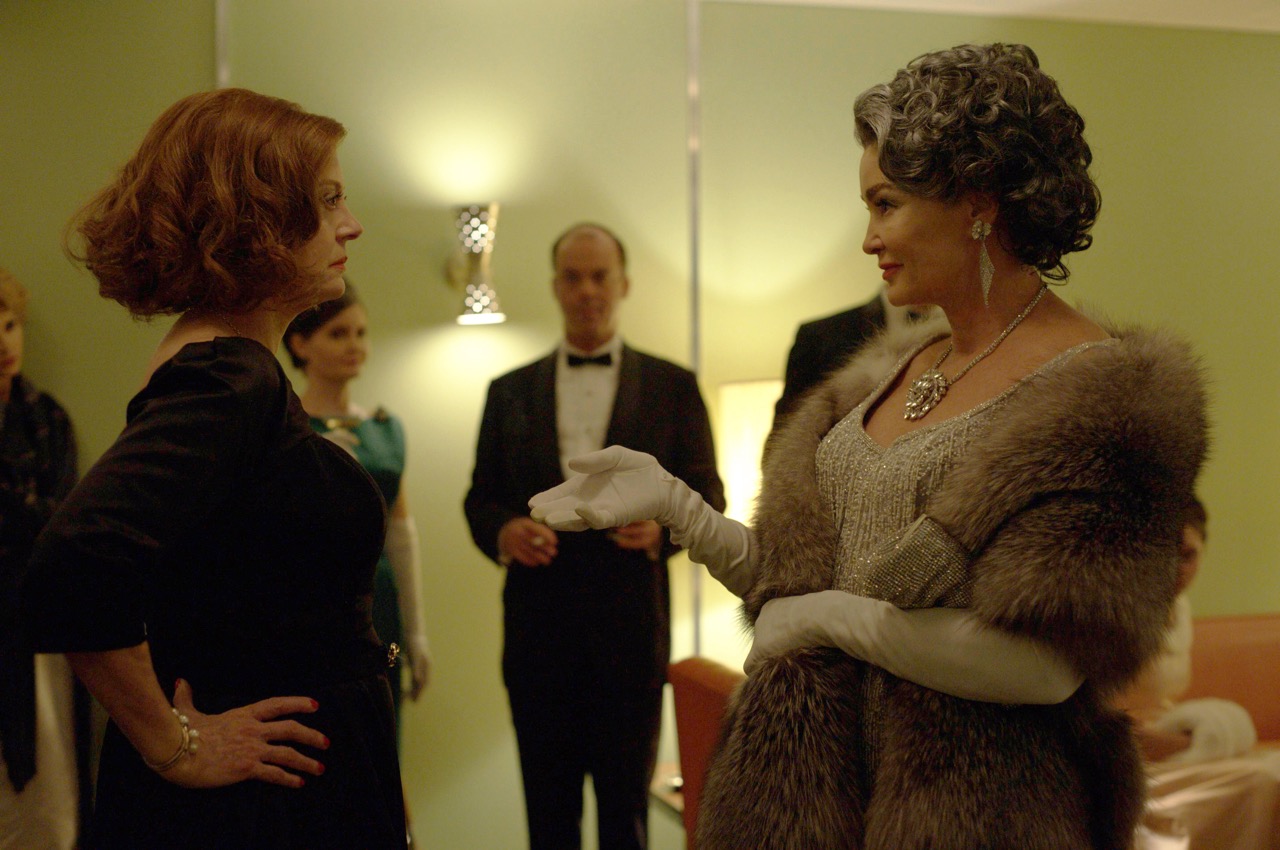 The first episode of Feud opens at the Golden Globes. Bright lights. Banquet tables. Camera follows a halo of blonde hair as it makes its way to the podium: Marilyn Monroe; she’s getting an award. As she walks by we see Crawford for the first time. She’s an enameled presence, dark haired, that famous downturned mouth now set in bitterness. She says to her companion, a younger lover, that she has nice tits too, but she doesn’t make a spectacle of them.

Crawford’s a bit drunk—she always is these days and why not: her time is past. Her white furs cannot dispel the chill she feels in the room, in the world. Tended to by a tough-minded German female companion named Mamacita (Jackie Hoffman), Crawford lives in a spotless palace; her Billy Haines furniture is covered in plastic, which is like a prophylactic against time and dirt—Crawford’s enemies. She shares her home with her adopted twin daughters; maybe she loves them. Her real focus, though, is getting that career up and running again: to be back in the game.

Still, there’s no real work to be had—or work she wants. (To her agent: “I can’t play Elvis’s grandmother. I can’t do it.”) Mamacita helps her find a book, Henry Farrell’s gothic 1960 novel, What Ever Happened to Baby Jane? It’s about two former stars—sisters—whose time has passed. Now they’re living in a gloomy house in Los Angeles; Blanche is crippled and is being looked after—if that’s the word—by her sister Jane, who was a famous vaudeville kid. The sisters can’t be together and yet can’t live apart. To make a film out of it, Crawford enlists Robert Aldrich, who directed her in one of her last hits, 1956’s Autumn Leaves. Crawford’s show business acumen is acute: she knows just who should play Baby Jane and knows, too, that if handled properly this movie could put them both back on top. 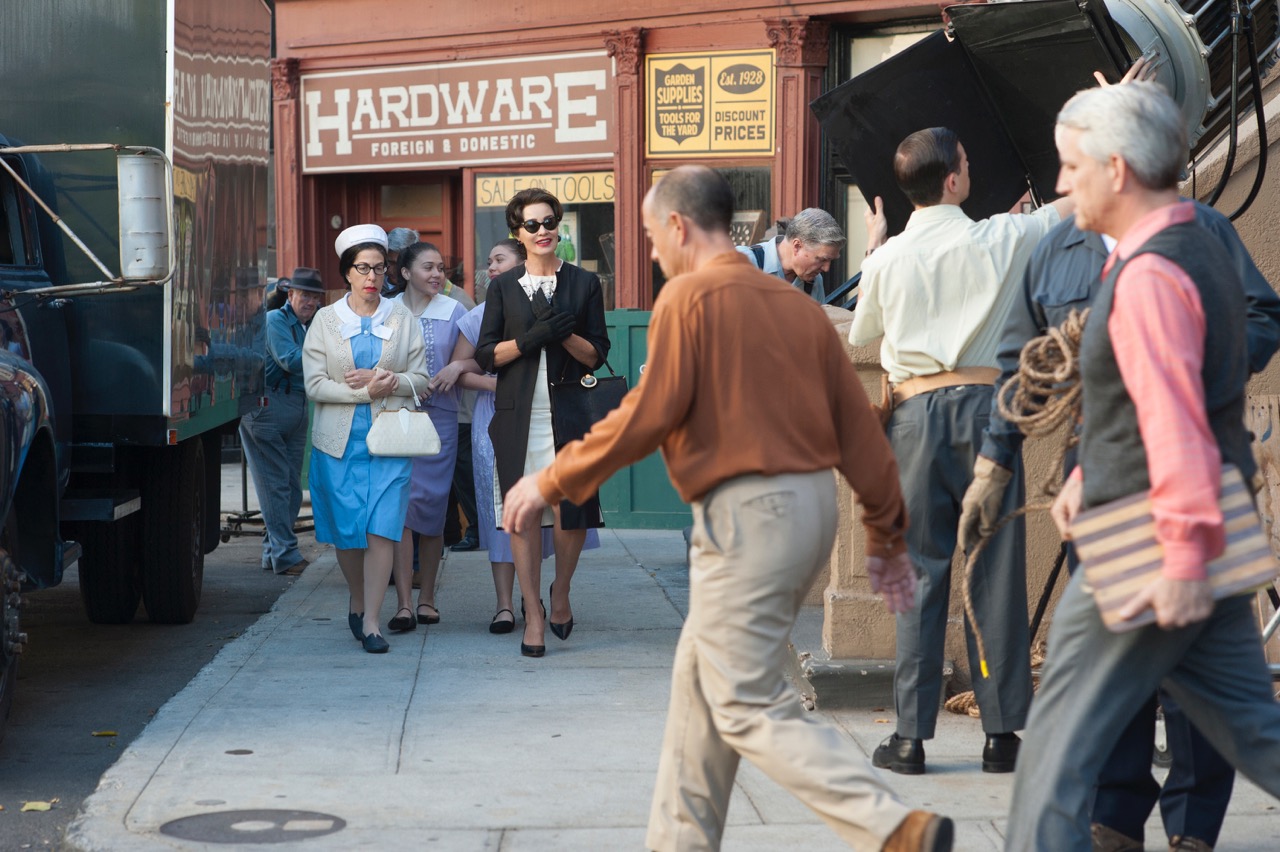 That’s where Bette Davis comes in. She’s appearing on Broadway in Tennessee Williams’s The Night of the Iguana when Crawford swains in to catch the play—tries to put a brave face on it all when Crawford shows up to offer her the role of Baby Jane. Davis tries to give her the brush off—she isn’t interested in appearing in a horror flick, she has plenty of offers. “Bullshit,” Crawford says, and then lays it out: they’re women of a certain age, this movie has a chance of being a hit, they need each other. The dialogue in this scene is extraordinary: the listener is torn between “acting” or pretense—Crawford and Davis trying to pretend things are better than they are—and then certain truths that cut to the quick: the industry has passed them by. The scene isn’t rushed, and the camera follows Lange as she moves around the dressing room, her hand passing over a wilted flower, then finding a bit of dust on a piece of furniture: how could her rival have sunk so low that she’s onstage, on Broadway?

As in Fassbinder’s two utterly exceptional films about femaleness-as-performance, 1972’s The Bitter Tears of Petra von Kant and 1982’s Veronika Voss, Feud’s scenario would have meant less had Murphy not infused the basic plot points—how do two women manage to create a world together if all they have known is antipathy both toward each other and the world of women—with an understanding of cultural hierarchy. He gets how women who don’t have the power to turn on power (“the suits”) to get what they want are bound to feed on one another and all else they might consider “female” or weak, dependent on male approval. Murphy also gets how success is a kind of drag, another heavy accessory to wear. Davis, considered the better or more “real” actress, is outspoken, her body language that of someone who will face life head-on no matter what it has to offer; you can only see her shrinking from love. Crawford, a creature of Hollywood, speaks the enunciated language of a star who learned how to be a self—or the movie industry’s idea of a self—with the help of a vocal coach hired during the advent of sound. When the actresses show us the sad truths that make them up, too, their self-created artifice doesn’t dissipate so much as get mixed in with their emotional reality, like spit in greasepaint. 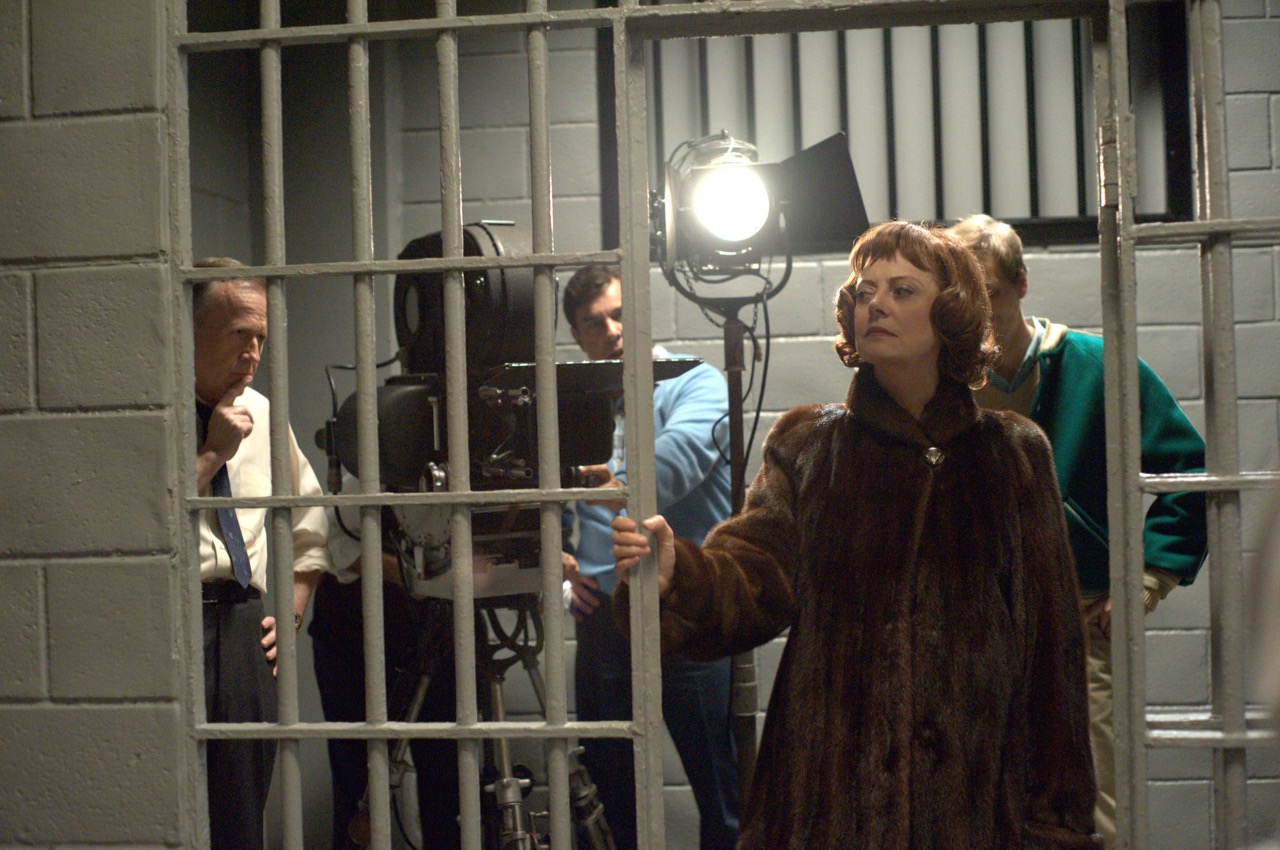 One night over drinks they talk about sex, and Crawford tells how she started sleeping with her mother’s husband when she was eleven. But, Davis says, her eyes filling with tears, you were just a child. Shrugging such sentiment off, Crawford is momentarily touched, but it’s just a moment: Who would she be if she was vulnerable to another woman, let alone her former and now again potential rival? Davis can extend a little maternal concern to Crawford, but when it comes to her teenaged daughter, an aspiring actress (Kiernan Shipka), who is neither talented nor a pro—well, how much does Davis feel as a mother? Or Crawford? Given the opportunity to correct the loneliness and hard work their own mothers forced their famous daughters into, neither knows how to make a second chance. The only truth they know is their need. Their story works brilliantly as a series because it allows Murphy to give the characters a life over a long arc. In so doing he maximizes the show’s emotional suspense, which he marries to the professional because, again, for these stars, neither is divisible: Will Baby Jane be a hit? Will Bette Davis win another Academy Award? Will Crawford and Davis learn to love their children?

Serving as a kind of knowing chorus, Joan Blondell (Kathy Bates) and Olivia de Havilland (Catherine Zeta-Jones) talk to a 1978 documentary crew about their famous friends, setting up a scene, and then we cut to see what’s been described. Murphy moves seamlessly between words—talk as testimony—and then “truth” as it’s acted. Judy Davis as the columnist Hedda Hopper helps brings these ideas to the fore. Dressed in one of Hopper’s signature hats, her neck tight with pearls and recrimination, she just fans the fires of Crawford and Davis’s acrimony, hoping for a story. But the performances in Feud are the story: Lange and Sarandon comment on their roles as they play them. Feud is Murphy’s deepest drama to date because of what he says in it: real life is a specious concept, but you can fuck up your real life if you don’t believe in it.

Hilton Als is a staff writer for The New Yorker magazine. He is the author of White Girls and is the co-author of Robert Gober: The Heart Is Not a Metaphor, and was awarded the 2017 Pulitzer Prize for Criticism.