Film
Can You Ever Forgive Me?

Fake it till you make it: Melissa McCarthy plays a letter forger in her
new movie. 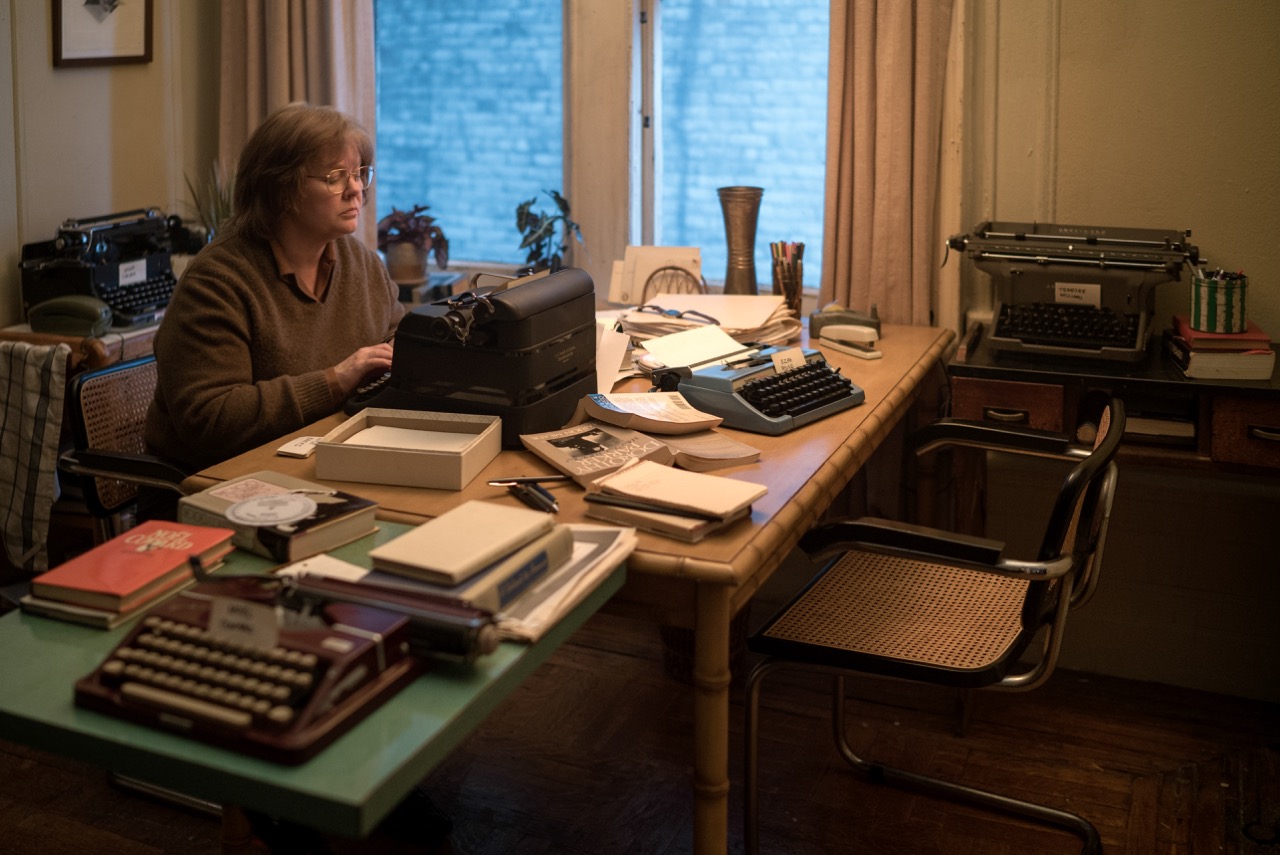 Melissa McCarthy as Lee Israel in Can You Ever Forgive Me?. Photo: Mary Cybulski. © 2018 Twentieth Century Fox Film Corporation, all rights reserved.

Can You Ever Forgive Me?, directed by Marielle Heller

By all accounts, including her own, Lee Israel (1939–2014)—a semi-renowned biographer turned forger of letters by such literati as Dorothy Parker and Noël Coward—was a pain in the ass. “I was not in the flower of mental health,” she writes in her slim 2008 memoir about her epistolary crimes, Can You Ever Forgive Me?, now adapted into a film of the same name directed by Marielle Heller and starring Melissa McCarthy. She was caustic, irascible, haughty, often drunk. Even more often, she was brilliant and hilarious.

She is, in other words, a role that is perfect for McCarthy to inhabit—or should have been. The actress, one of the funniest women in movies, specializes in playing unrepentant characters who possess unyielding bravado and tremendous self-regard, as evidenced in the slovenly loudmouths she portrayed in The Heat (2013) and Tammy (2014), and the scornful tycoon in The Boss (2016). (Her recurring cameo as Sean Spicer on Saturday Night Live last year fits in with this aggro, arrogant sorority.) Those movies are comedies; Heller’s more serious life study is not. But the change in genre isn’t what constrains McCarthy’s performance. The drollery and bite that animate Israel’s book—which took me about the same amount of time, perhaps even less, to read as it did to watch Heller’s roughly two-hour film—have largely been defanged here. An echt New York eccentric, Lee Israel onscreen has been remolded into a generically grumpy outcast, one whose miseries seem to stem from that catch-all etiology, “trust issues.” 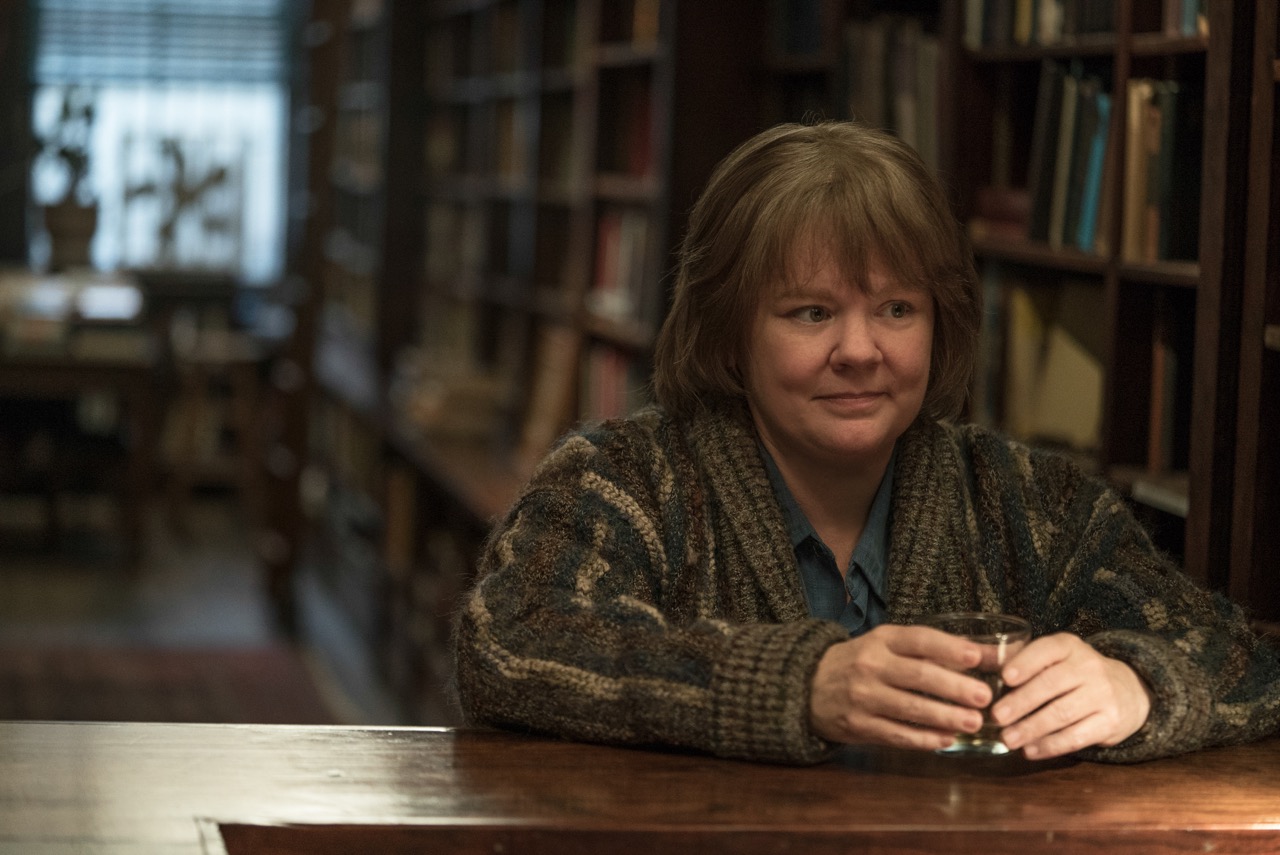 Melissa McCarthy as Lee Israel in Can You Ever Forgive Me?. Photo: Mary Cybulski. © 2018 Twentieth Century Fox Film Corporation, all rights reserved.

Can You Ever Forgive Me? is Heller’s second film and her second page-to-screen transfer, following The Diary of a Teenage Girl (2015), her too-twee adaptation, which she also scripted, of Phoebe Gloeckner’s autobiographical graphic novel about her harrowing 1970s adolescence. As a translator of first-person accounts, Heller has so far proven to be passably proficient, but far from fluent. (It’s worth mentioning that Israel’s story was originally slated to be directed by Nicole Holofcener and star Julianne Moore; the actress left the project owing to creative differences. Holofcener, best known as a writer-director of intimate, garrulous chamber pieces like 2013’s Enough Said, departed soon after but shares a screenplay credit for Can You with Jeff Whitty.)

Can You begins in 1991, the date that Israel launched her counterfeiting scheme, which would continue until ’92 and yield approximately four hundred fraudulent letters. The writer is about six years into a dismal fallow stretch that began with her icily received biography of Estée Lauder, contempt that hit Israel hard; she was convinced her career could only ascend further following the success of her chronicles of the actress Tallulah Bankhead (published in 1972) and journalist and TV-game-show perennial Dorothy Kilgallen (from 1980). The movie’s opening scene reveals how far Israel has plummeted: she’s now working the graveyard shift as a legal proofreader. (The film omits the even grimmer truth that during this period Israel was sometimes on welfare and received food stamps.) Soon she loses this gig: after telling a supervisor to fuck off, Israel stumbles home before dawn to her Upper West Side flat, where dead flies dot her pillowcase and cat turds accumulate under her bed. 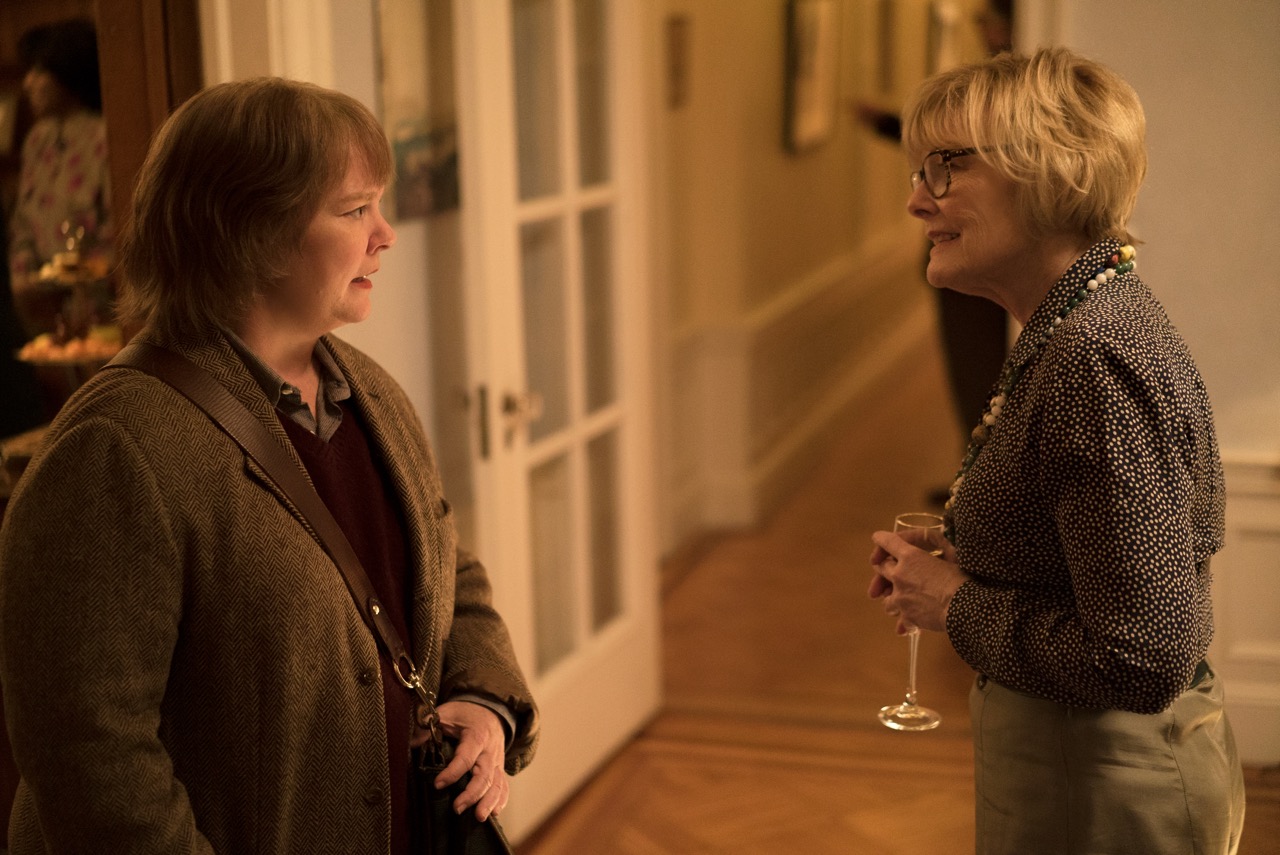 Melissa McCarthy as Lee Israel and Jane Curtin as Marjorie in Can You Ever Forgive Me?. © 2018 Twentieth Century Fox Film Corporation, all rights reserved.

Outfitted in blazers, sweater vests, and thick cable-knit cardigans—sartorial choices that suggest ’70s-era Fran Lebowitz mixed with a Zabar’s regular from any decade—McCarthy moves through the film as someone who can barely carry the enormous load of her rage over her pitiful circumstances, but whose belief in her own genius has not yet been fully extinguished. Her posture and gestures seem just right, her dialogue much less so. “Oh, to be a white male who doesn’t know he’s full of crap,” Israel fumes about Tom Clancy—repped by her agent (Jane Curtin), who’d much rather be promoting the blockbuster Jack Ryan creator than returning Lee’s calls. The line clangs with the ineffectual vituperation of a social-media salvo. No language that vapid ever appears in Israel’s memoir, which is replete with piquant observations, especially about the author herself: “I was imprudent with money and Dionysian to the quick.” 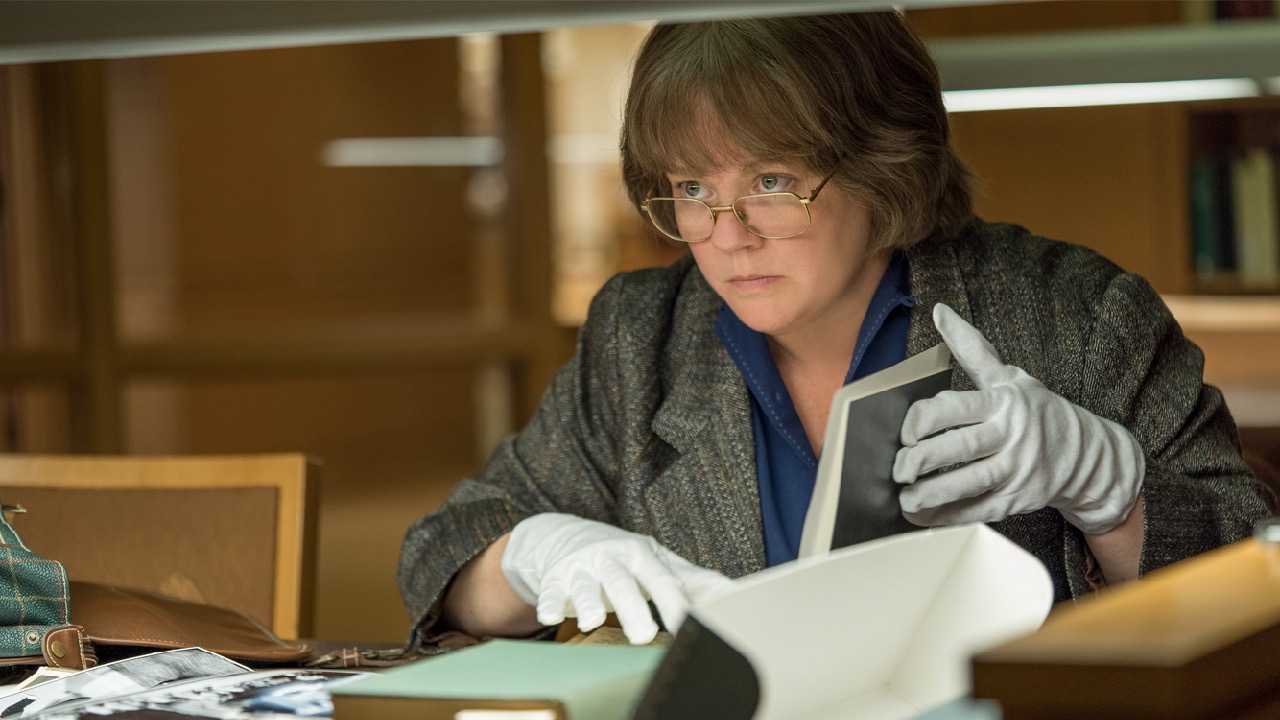 Melissa McCarthy as Lee Israel in Can You Ever Forgive Me?. Photo: Mary Cybulski. © 2017 Twentieth Century Fox Film Corporation, all rights reserved.

Israel’s gifts for tart precision, combined with her skills as a biographer, made her the ideal literary forger, a crime that she falls into in the film while doing preliminary research on Fanny Brice for what she hopes will be another book. Pilfering some mundane letters by the storied comedian from the New York Public Library, Israel learns from various antiquarian-bookshop employees that missives from luminaries fetch a higher price if they contain more intriguing content. She adds postscripts to Brice’s dispatches and begins to fabricate in full multiple dishy epistles from Parker (one of which contains the line that supplies the title for Israel’s book and Heller’s movie), as well as from Coward, Edna Ferber, Louise Brooks, and others. She now can pay months of back rent and take her beloved feline to the vet. 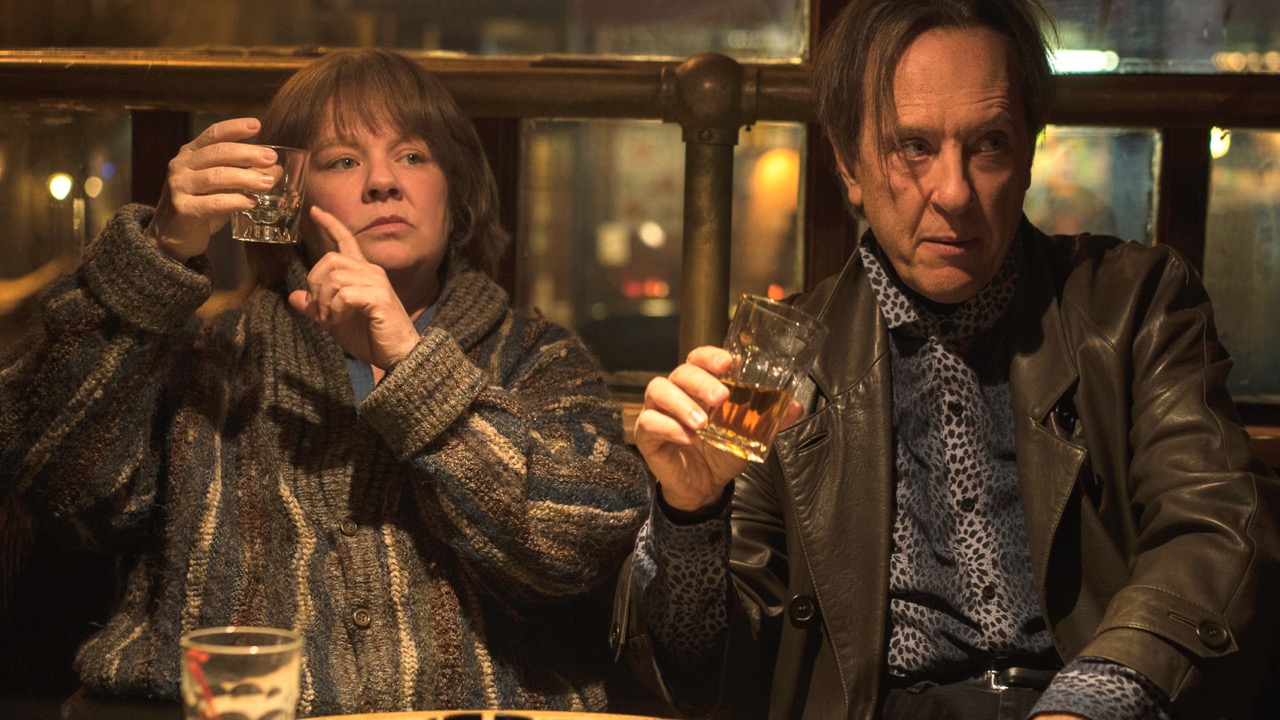 Melissa McCarthy as Lee Israel and Richard E. Grant as Jack Hock in Can You Ever Forgive Me?. Photo: Mary Cybulski. © 2017 Twentieth Century Fox Film Corporation, all rights reserved.

And yet still Lee is unhappy. Something is missing. What could it be? Israel was openly gay, as we learn about halfway through the film, when she mentions an ex-girlfriend while talking with the terrifically named Jack Hock (Richard E. Grant), a fellow homosexual and her occasional crime confederate (and day-drinking buddy at Julius’, the legendary West Village homophile HQ). Later, the former lovers meet for a recrimination-filled chat on a bench by the reservoir in Central Park. Elaine (Anna Deavere Smith), the ex, laments, “I tried to get you to trust me,” before announcing that she has to get back to class. Here’s how Israel, on page fifteen of her memoir, describes that relationship: “Having worked so long and hard on the [Kilgallen biography], I took many months off to play. I fell in love with a brilliant, beautiful bartender named Elaine, a lapsed Catholic who now observed only Bloomsday and St. Patrick’s—the first with solemnity, the latter with wretched excess. And so I took more time to play.” The film has misinterpreted “Dionysian to the quick” to mean “saturnine to the death.”

As disappointing as the movie is, both for underutilizing McCarthy’s talents and banalizing Israel, I’d still like to see a sequel. While serving five years on probation—the punishment for her forgeries, which also included six months of house arrest—Israel began working as a copy editor for Scholastic magazines, a position she held for, in her words, “six sufferable years.” Who did this impeccable impersonator on the page have to turn herself into to endure the nine-to-five grind in kiddie lit?