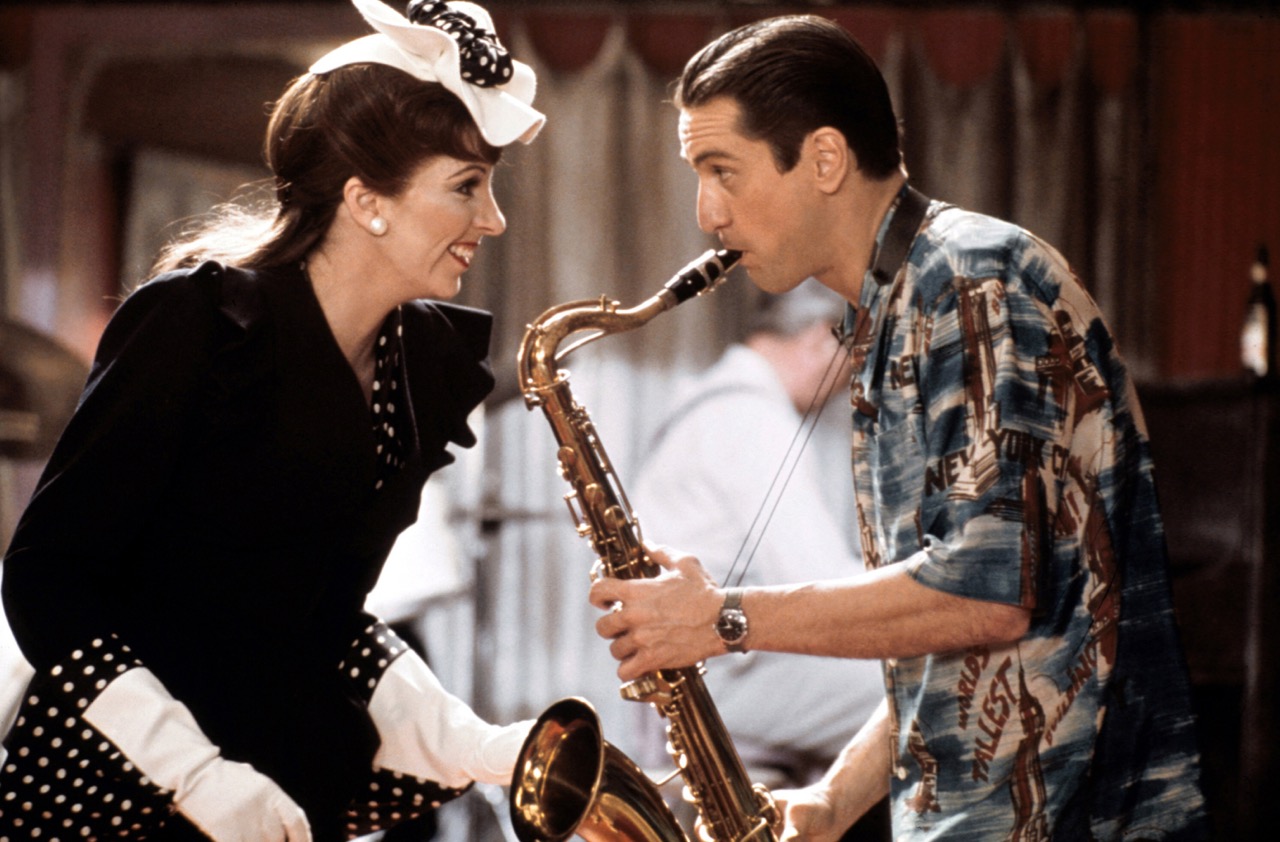 A film of otherworldly artifice and emotional ravaging, Martin Scorsese’s doleful musical New York, New York (1977) forms a fascinating diptych with Taxi Driver, released the year before. The earlier movie, perhaps the definitive totem of Abe Beame–era Gotham and a signature work of New American Cinema, hypnotizes and repels with its sordid, stygian portrayal of a suppurating metropolis. With New York, New York, Scorsese, a Little Italy native, created a far rosier tribute to his hometown by saluting the Hollywood musicals of the 1940s and ’50s that he had so loved during his movie-mad youth.

The city here is a neon-bathed fantasia, re-created mostly on backlots and sets in Los Angeles. Despite its sumptuousness, New York, New York throbs with an anguish nearly as raw as that found in its predecessor. Scorsese likened this lavish production to “a $10 million home movie,” its plot reflecting the real-life discord the director himself was facing. The look and sound of New York, New York, which screens for a week at Metrograph in a swoony new 35mm print, may rapturously bring to mind any number of postwar MGM marvels. But its mood suggests outtakes from a scorching psychodrama, rushes from a documentary of a couple imploding.

New York, New York begins with a scene of superbly orchestrated mass revelry, as hundreds celebrate V-J Day at a Times Square ballroom, swinging, drinking, and necking while Tommy Dorsey’s band plays. One of those carousers is ex-GI Jimmy Doyle (an overwhelmingly beautiful Robert De Niro, in his third of nine movies to date with Scorsese). Decked out in spectator shoes and a garish Hawaiian shirt imprinted with Big Apple landmarks, Jimmy circuits the dance hall like a jittery horndog, his pinballing intensity recalling the lusty energy of the sailors on twenty-four-hour shore leave in New York in Gene Kelly and Stanley Donen’s exuberant On the Town (1949). He delivers a fusillade of terrible pickup lines (“Can I meet ya in Central Park?”) at Francine Evans (Liza Minnelli), who’s handsomely attired in her USO uniform, her lips and nails matching the maraschino cherry that she fishes out of her cocktail. 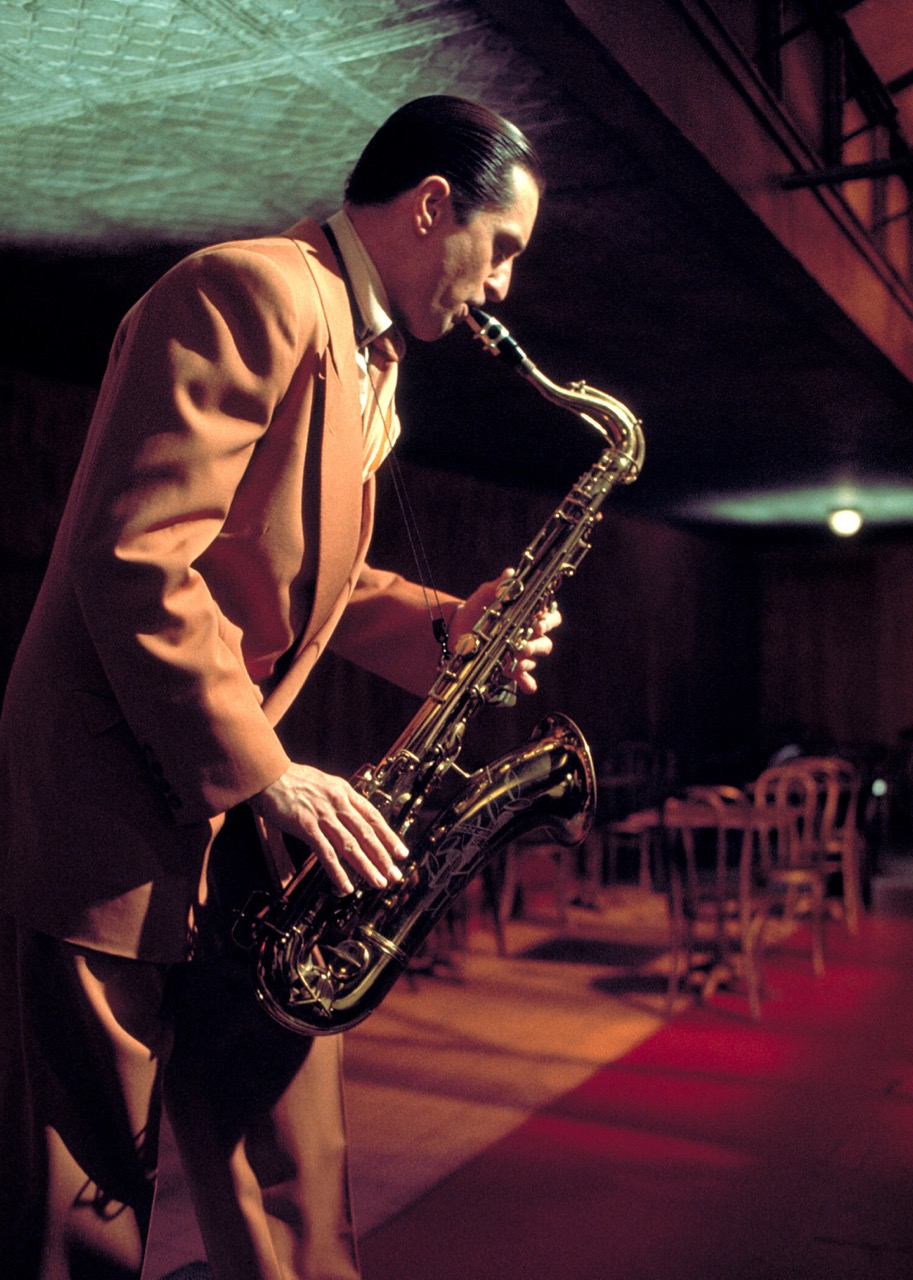 Francine’s snubs of Jimmy’s pathetic come-ons—in uttering a simple “no” more than a dozen times, Minnelli deftly handles the monosyllable like a rubber ball—typify the kineticism of New York, New York, which went into production without a finished script and was largely improvised. But despite her initial flat-out rejections, Francine finds the Brylcreemed live wire alluring enough that she ends up tagging along with Jimmy, a tenor sax player, to his audition at a Flatbush Avenue club. About to be eighty-sixed for one of his tantrums during the tryout, Jimmy is saved by Francine, who launches into “You Brought a New Kind of Love to Me,” one of several standards Minnelli sings in New York, New York, in addition to tracks written for the film—including the title anthem—by her frequent collaborators John Kander and Fred Ebb. Jimmy and Francine go on the road together, fall in love, and wed, but their romantic and professional partnership cannot withstand his jealousy of her success, behavior that leaves Francine increasingly isolated.

The couple’s candid talk often takes place in settings of exquisite make-believe; a scene of Jimmy and Francine deep in conversation on a winter day features an art nouveau copse that could have been designed by Aubrey Beardsley. The lush decor, rather than distracting from or diminishing the feelings laid bare, serves to heighten them. As the director himself explained in the book-length interview Scorsese on Scorsese (1989), his ’40s-set musical is animated by Me Decade concerns about parity in relationships: “It’s about two people in love with each other who are both creative. That was the idea: to see if the marriage would work. We didn’t know if this marriage was going to work, because we didn’t know if our own marriages were working.” 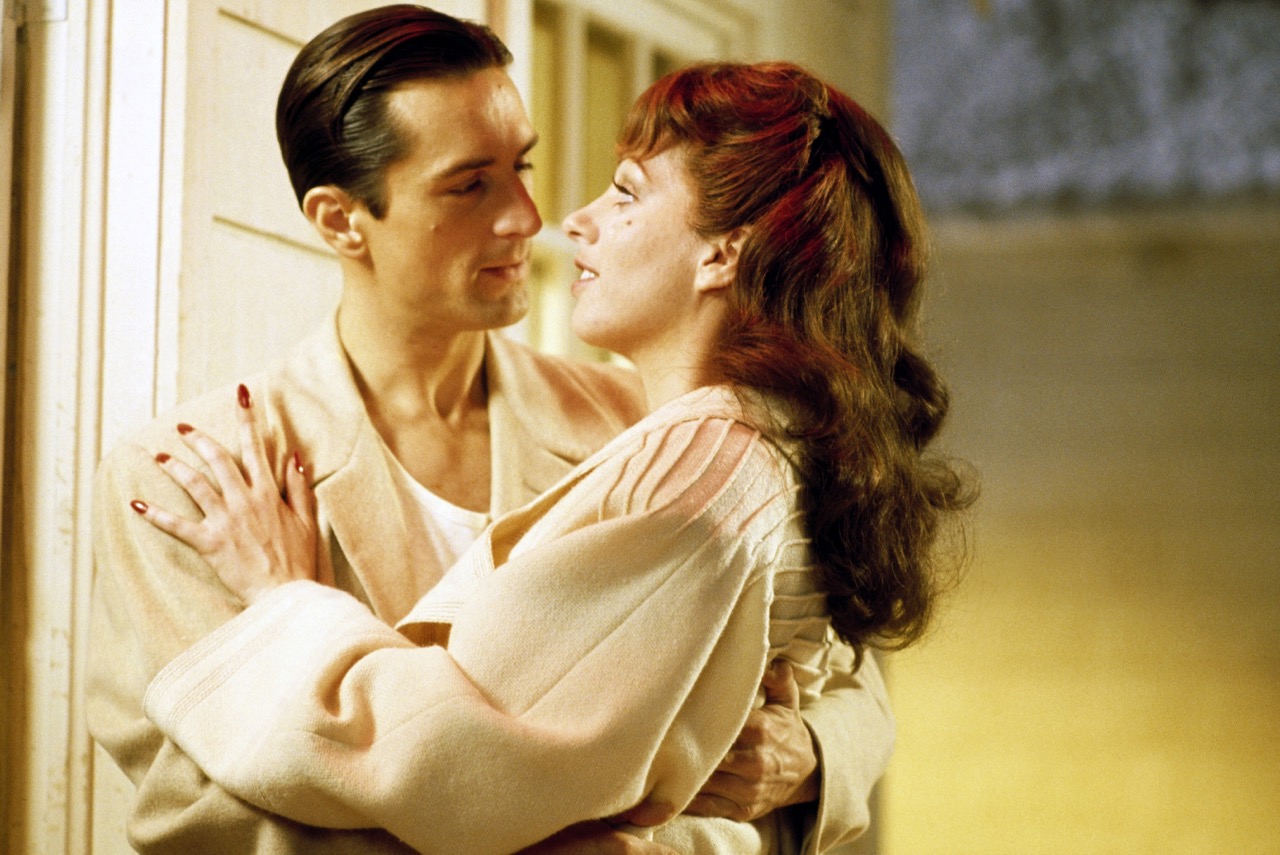 In fact, Scorsese’s marriage to Julia Cameron, a journalist who did script doctoring on both Taxi Driver and New York, New York, was floundering: they wed in 1976 and divorced the following year. While his musical was in production, months that coincided with Cameron’s pregnancy, Scorsese carried on an open affair with Minnelli, mirroring Jimmy’s caddish treatment of Francine. (As the author of 1992’s “creative-recovery” guide The Artist’s Way, Cameron now enjoys a fame that may be just as enduring, if less high-profile, as her ex-spouse’s.)

The casting of Liza, the monstrously talented only child of Vincente Minnelli and Judy Garland—two of the greatest luminaries of the movie genre Scorsese deifies—ensures that New York, New York can ingeniously blur film fiction and off-screen reality and seamlessly inhabit two time frames at once. Liza, who became a ’70s icon largely owing to her work with Bob Fosse early in the decade—Cabaret and the TV concert Liza with a “Z”, both from 1972—signals au courant superstardom and a throwback to the cherished song-and-dance movies her father directed or her mother starred in. Late in New York, New York, as Francine, now a single mother, records her first album for Decca, Liza tears into the Kander and Ebb composition “But the World Goes ’Round”—an atavistic performance that summons not only Sally Bowles (the plaintive track is reminiscent of Cabaret’s “Maybe This Time”) but also, thanks to Liza’s beseeching gestures, Mama Judy belting out the torchy “The Man That Got Away” in A Star Is Born (1954). 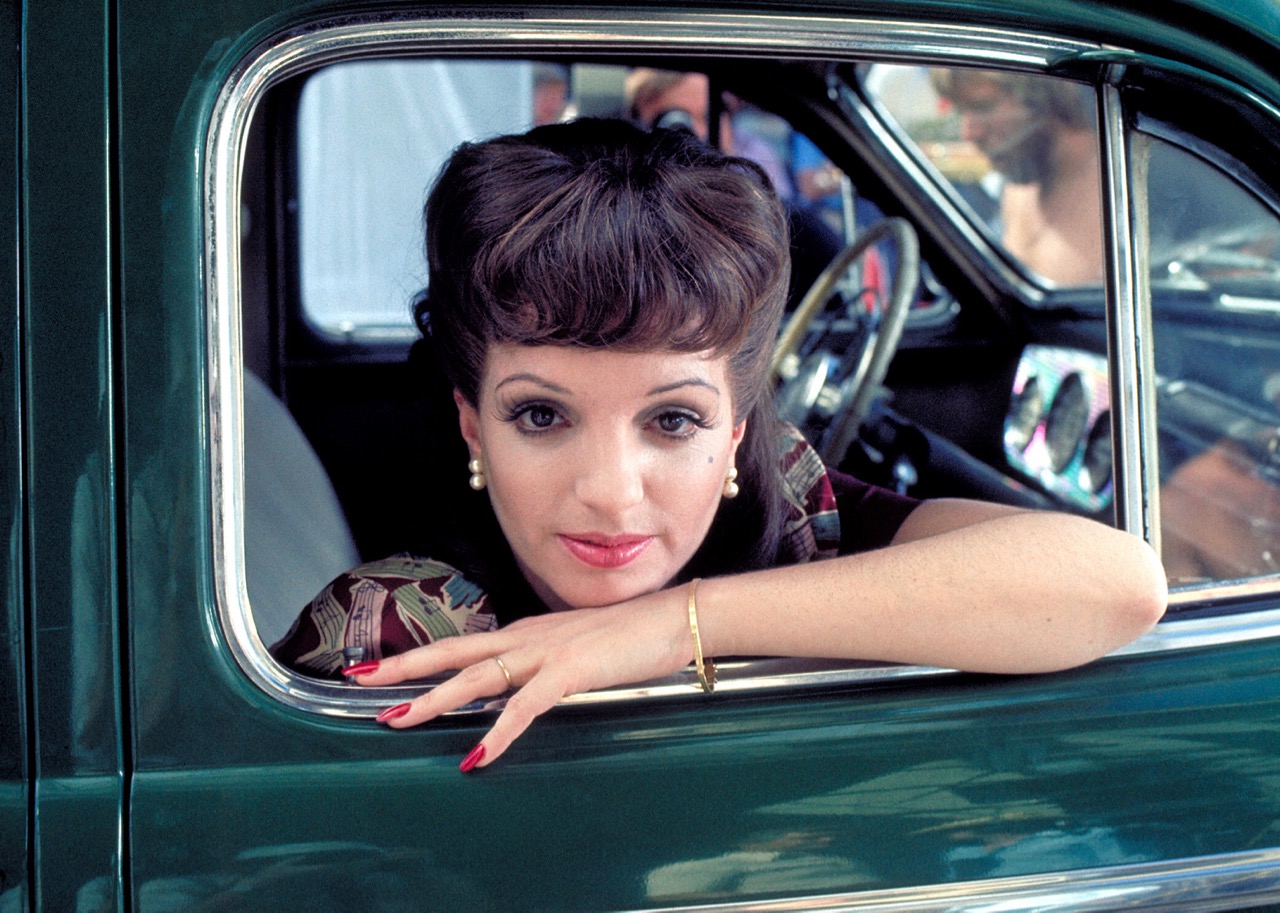 Scorsese’s bold experiment, which did poorly both critically and commercially, was released on June 21, 1977—less than a month after George Lucas’s Star Wars, the juggernaut that irrevocably, irreparably changed the film industry. Marcia Lucas, George’s wife at the time and an editor for both New York, New York and Star Wars, was one among many Hollywood insiders who predicted that the two movies would meet with opposite fates: “New York, New York is a film for grown-ups, yours is just a kids’ movie, and nobody’s going to take it seriously,” she reportedly told her husband.

While New York, New York was still being edited, George advised Scorsese that his film could gross an extra $10 million if he gave the musical a happy ending. The counsel chilled him. “When I heard him say that, I knew I was doomed, that I would not make it in this business,” Scorsese told Peter Biskind, author of the New American Cinema chronicle Easy Riders, Raging Bulls (1998). “I knew that what the two characters had gone through in that film, I had gone through in my own life, and I knew I wouldn’t be able to face myself or them if Bob and Liza were to go off together.” It would be absurd to say that the man who went on to direct, among so many other lauded movies, Goodfellas, The Departed, and The Irishman hasn’t made it in the business. But his kind of cinema—films for grown-ups—remains ever imperiled.