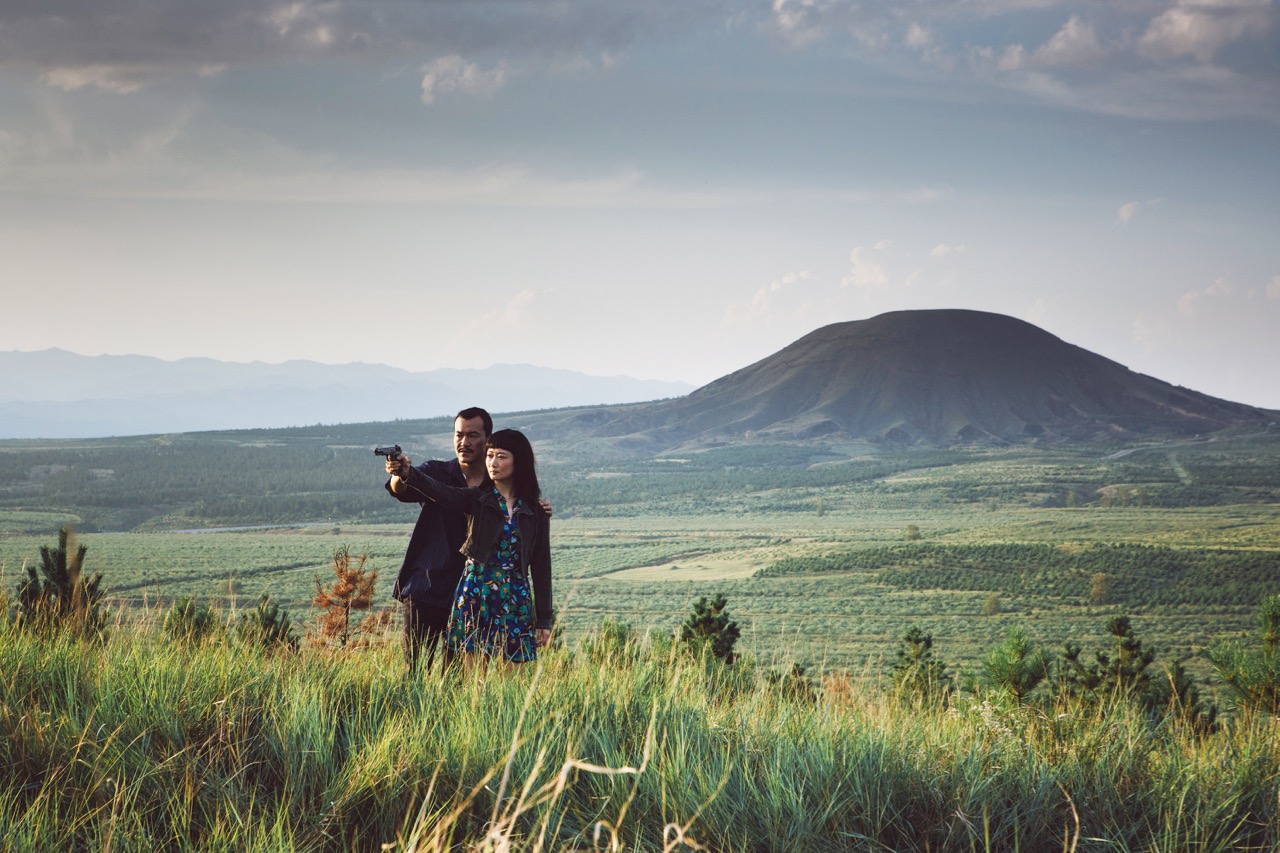 Reigning for two decades as the premier bard of that elephantine subject known as “contemporary China” is bound to weigh down even the most vital of film careers with grave monumentality. That’s been the dilemma with Jia Zhangke: he’s admirably never shied away from diagnosing the soul-sickness of his country, but the increasing think-piece grandeur of his films’ tone has at times obscured the qualities that make him such a profound artist. In his latest, Ash Is Purest White, he reminds us that not least among his strengths is his commitment to being a true actor’s director. If we remember that Jia was a break dancer in his youth and remains an avid karaoke lover, it makes all the more sense that, without exception, his films are anchored by unforgettable performers. Even in early masterpieces like 1997’s Xiao Wu and 2000’s Platform, whose casts are populated mostly by nonprofessionals from his rural hometown of Fenyang, he elicited performances that tread the line between unfussy naturalism and artful expression.

Those movies were dominated by masculine disaffection, emblematized by the cigarette-dangling sneer of Wang Hongwei’s petty thief in Xiao Wu. As in the work of countless male auteurs before him, Jia’s films tend to envision “woman” as an avatar of tragic emotion: in one gorgeous crescendo in Platform, the actress Zhao Tao, who was once a dancer, twirls around a dreary office to a Mandopop ballad, the kind that up until recent decades would have been condemned as “decadent” and “bourgeois” by the Communist authorities. Almost twenty years later, Zhao is the director’s wife and his most important onscreen collaborator. In Ash, where she plays the girlfriend of a sleazily mustachioed mobster in the industrial town of Datong, her presence grants clarity of purpose to a zigzagging storyline. Far from being a mere symbol of feminine vulnerability, Zhao emerges as no less than the film’s coauthor, with her performance bringing grit to an action-melodrama hybrid that might otherwise register as a bid to endear China’s greatest art-house auteur to a wider commercial audience. 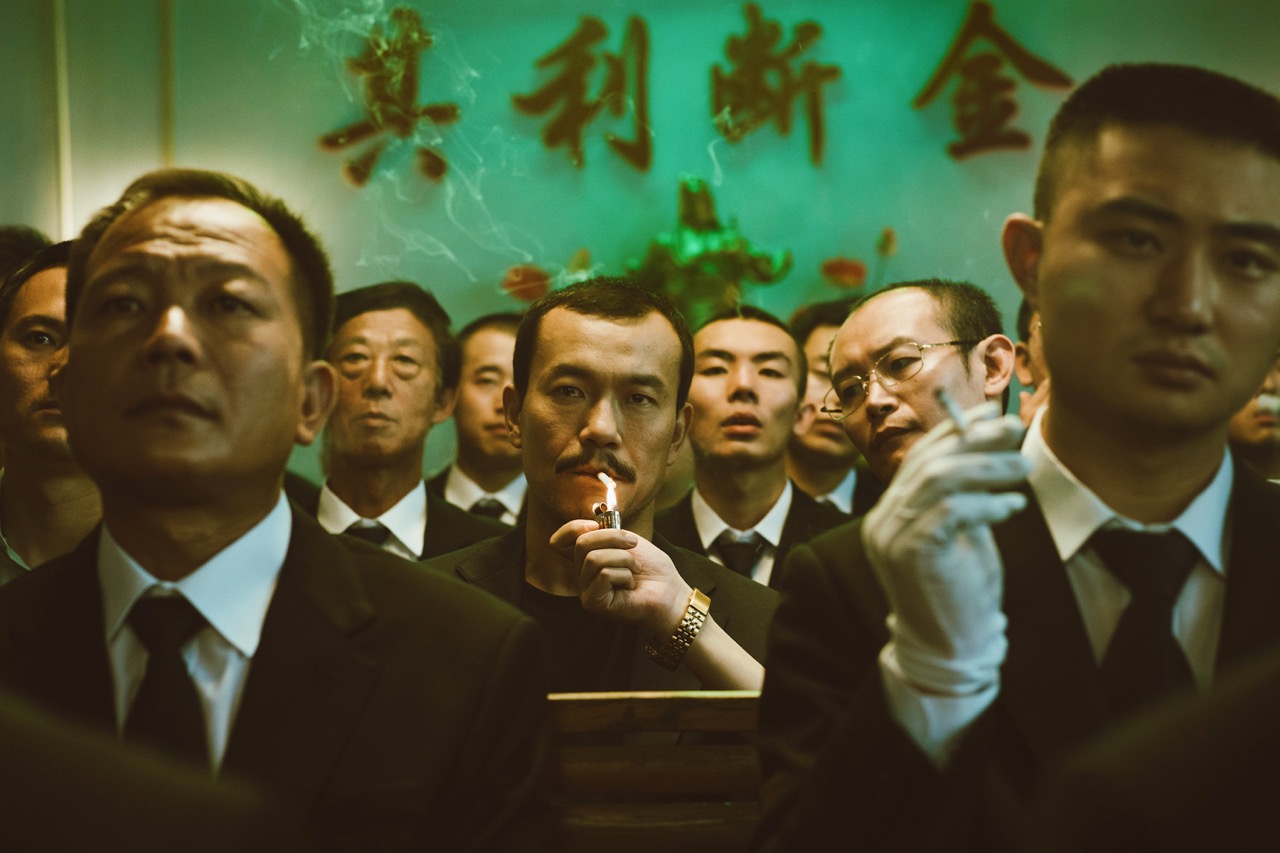 The movie’s original Mandarin title invokes the myth of the jianghu, an ungovernable underworld that serves as the prototypical setting of martial-arts cinema. Jia transposes that realm’s ancient, unspoken codes to an unglamorous, decidedly non-mystical twenty-first century, chronicling sixteen years in the relationship of criminal elites Qiao (Zhao) and Bin (Liao Fan), who find their status in the gangster community challenged by a new guard of vicious thugs.

Jia has always been impatient with the conventions of social realism, and Ash’s premise gives him a chance to tip his hat to Chinese cinema’s genre-rich past. He builds a seedy atmosphere out of quirky but perfectly judged grace notes: a dreamlike shot of Bin and his posse at a screening of the Hong Kong action classic The Killer, a pair of self-serious ballroom dancers who show up to entertain at a mob boss’s funeral. When things come to a head for the protagonists and Qiao is forced to save Bin from being killed by young hoodlums, Jia gets to stage his own version of a John Woo fight sequence, placing a gun in Zhao’s hand in much the same stylized way he had her wielding a knife in 2013’s A Touch of Sin. It’s a high-wattage moment, one in which this heretofore subdued actress gets to assert herself not as an object of easy sympathy but as a figure of her own wildest dreams. Raising her weapon aloft with the elegance of a ballerina balancing a prop, she proves she can take care of business as coolly as any wuxia warrior. 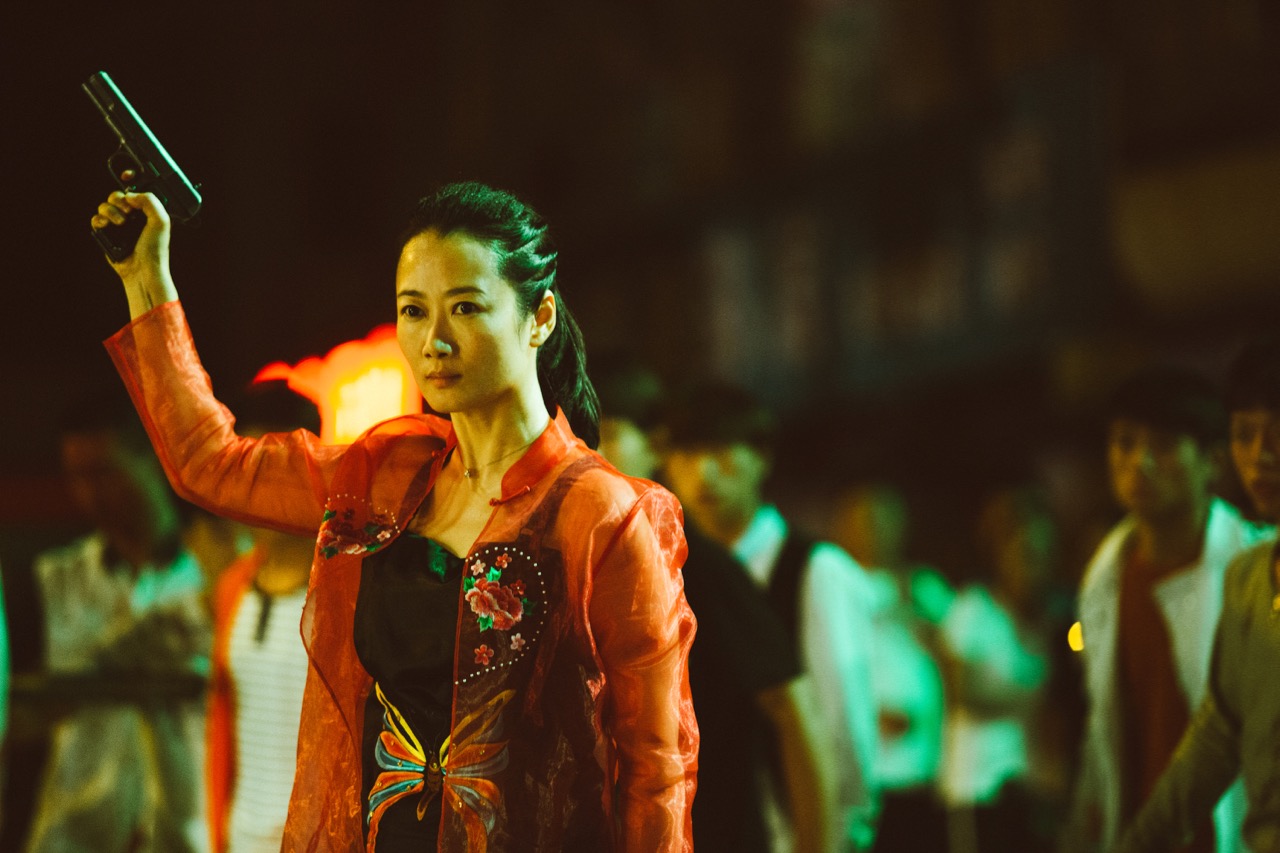 This flair for badassery distinguishes Qiao from the actress’s previous roles. But Zhao is such a master of melancholy that it comes as a relief when the heroine proves somewhat less than indomitable. Jia separates the lovers by sentencing Qiao to an unfairly long prison term, and when she’s released, her dashed hopes that Bin will be waiting to pick up where they left off turns her into a sad road-movie wanderer. In the film’s middle section—one of the most beautifully orchestrated passages in Jia’s oeuvre—she travels across China to locate the old flame she risked her life for. After discovering him in a relationship with a sassy younger woman, she heads west toward Xinjiang, where a stranger on a train (blockbuster star Xu Zheng) has ludicrously offered her a job in UFO research. 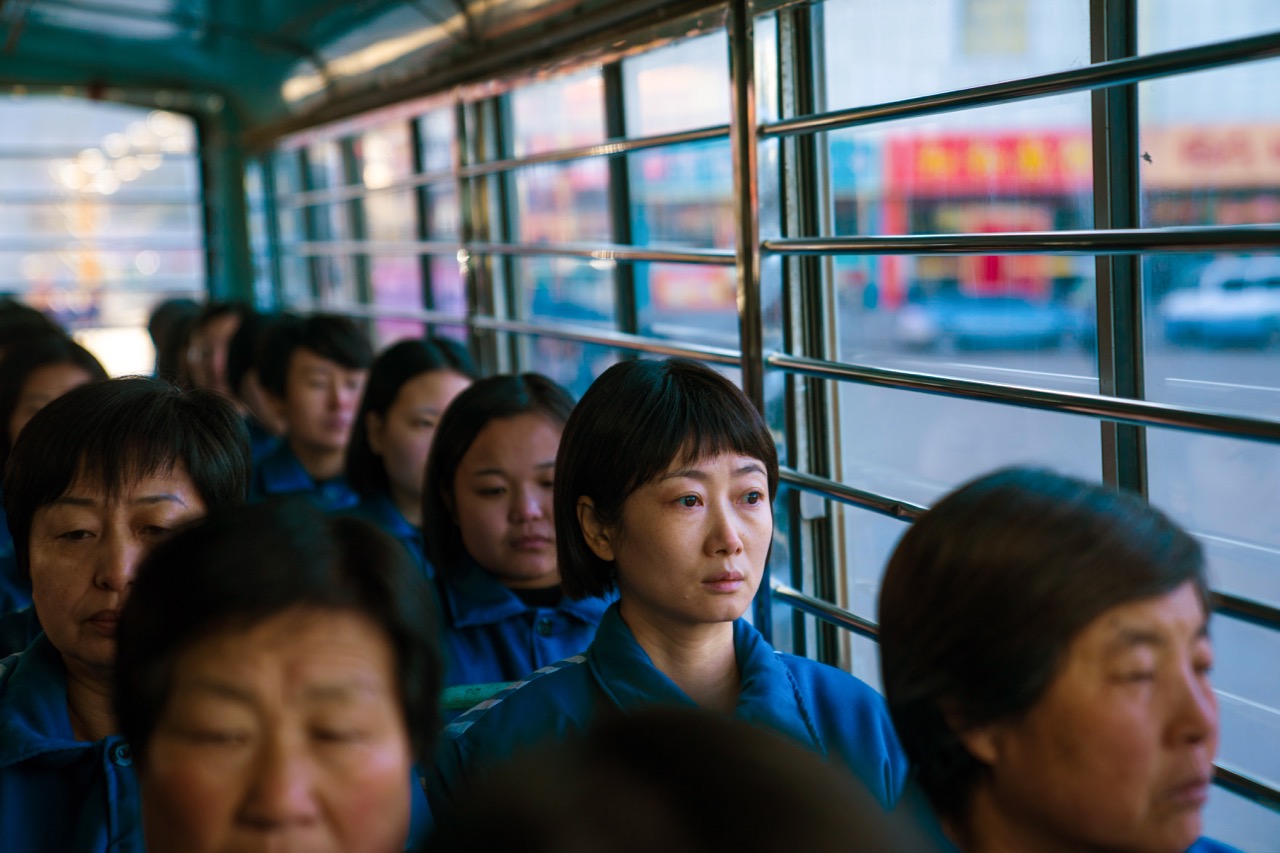 If the opening of Ash styles Zhao in the vein of the youthful, Louise Brooks–bobbed rebel in Jia’s Unknown Pleasures (2002), the second act finds her bearing a conspicuous resemblance to the dowdy abandoned wife in his Still Life (2006). These references hint at the same retrospective mood that propels Wong Kar-wai’s 2046 (2004) and Hou Hsiao-hsien’s Three Times (2005), self-quoting career summations from two of Jia’s most esteemed Sinophone comrades. That mood is further amplified by the film’s subtle use of multiple formats—from pixelated digital video shot by Jia himself in the early 2000s to cinematographer Eric Gautier’s use of the ultra-high-resolution Red camera—which invite us to reminisce on the evolution of Jia’s aesthetic (and of China itself) over the past twenty years.

Such middle-aged, legacy-oriented ruminations never steal the spotlight from Jia’s star, however. Zhao gets a number of chances to upend the patriarchy, moments that the actress pulls off with comic aplomb: in one set piece, Qiao strolls into a fancy restaurant, spots a pair of potential philanderers, and successfully scams one of them out of his cash by claiming his paramour has suffered a miscarriage; in another crowd-pleasing bit, she tricks a skeevy motorcyclist who’s propositioned her and makes off with his bike. 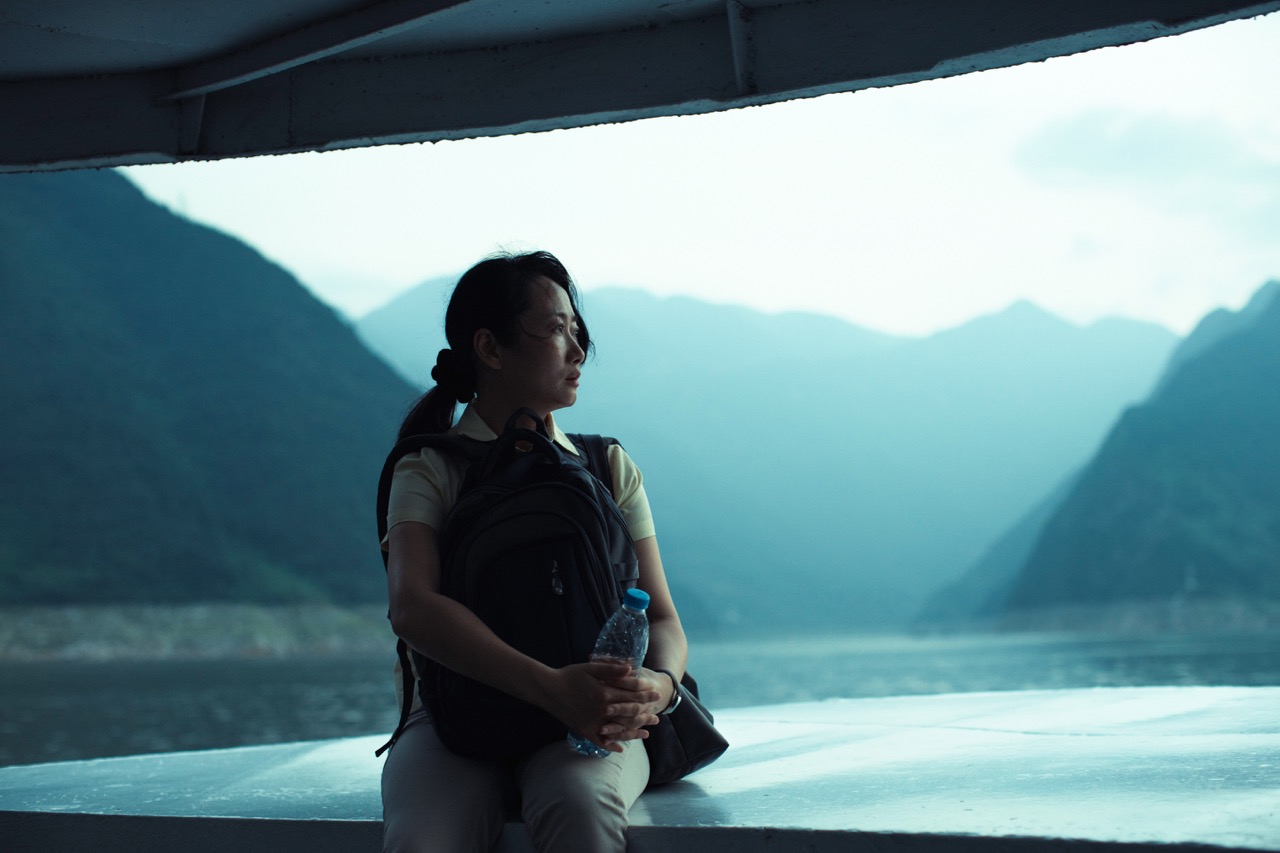 Despite this streak of self-determination, it doesn’t take long for good-for-nothing Bin to drift back into her life, an occasion that turns her into a stoic, duty-bound nurturer. This role, in less capable hands, might seem to be a manifestation of some pernicious male fantasy, that of an all-purpose woman who can be soft and hard at the same time. But Zhao is unapologetic in embodying the contradictions of a character who is manslayer one minute, devoted lover the next. And it’s in the quietly idiosyncratic ways she fills in the gap between these two archetypes that Ash becomes Jia’s most resonant work in at least a decade, a film in which the warring impulses within a single character cut through the noise of big themes and national metaphors.