Rem Koolhaas takes over the Guggenheim to explore the nonurban world. 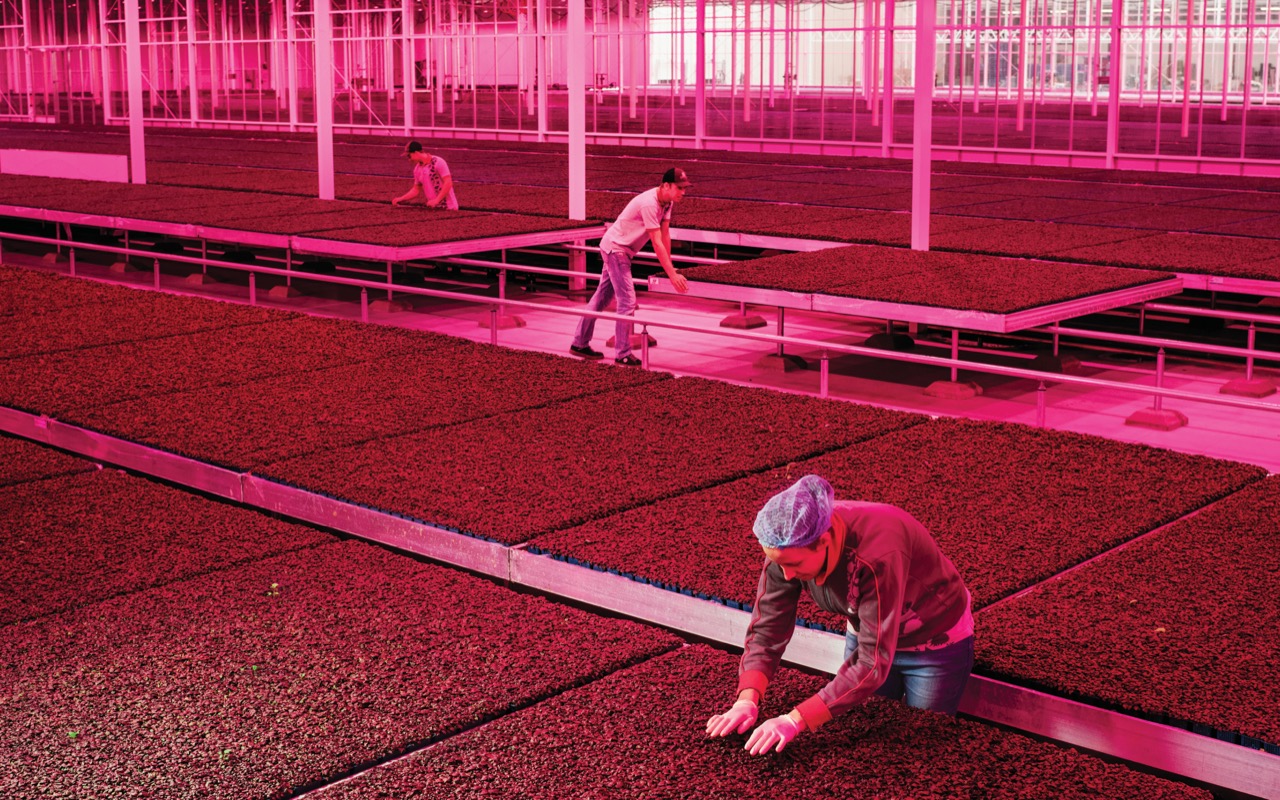 Editor’s note: As of this writing, the Guggenheim is temporarily closed to the public due to COVID-19 concerns. To virtually tour Countryside, The Future, an audio guide is available on the museum’s website.

Rem Koolhaas is dead. Long live RK! Like a hip-hop artist adopting a new nickname to mark a fresh career phase, the world’s most omnivorous architect has a new moniker to accompany his latest ideological pivot. Countryside, The Future recently opened at the Guggenheim, an exhibition organized to contest the idea—once promoted by Koolhaas himself—that everything of consequence in this world happens within the urban sphere. Koolhaas’s choice to be credited as “RK” in both the show and catalog might also be an attempt to join the distinguished company of “Corb” and “Mies.” I’m slightly disappointed that he didn’t go with something dope like “MC Rem,” “DJ Kool Haas,” or “A$AP RK.”

Based on past experience, Koolhaas and his multifaceted architectural juggernaut will likely be impervious to criticism. I don’t sense that there’s much fun to be had in piling on with the other detractors. What alternative might prove more rewarding: Succumbing to the exhibition’s sheer visual pleasure? Imbibing the wealth of specialized information? Marveling at feats of human innovation? Hailing the curatorial battle against the Guggenheim’s notoriously obstinate architecture?

Countryside, which devotes itself to exploring more than a century’s worth of progressive agrarian and land-use practices, gives us much to devour and much to learn. RK’s legendary propensity for excess is amplified here to an almost unprecedented degree. There is literally more than enough for everyone. This ain’t, to paraphrase Donny and Marie, “a little bit country.” It’s country served with a density most often found at an urban scale—a cacophony of words, images, music, video, and infographics more suggestive of Times Square than sleepy rice fields on the Yangtze Plain.

However, if you are hoping for an exhibit about architectural design, Countryside immediately sets itself up to dissatisfy. RK himself, in remarks given at the press preview and in versions published elsewhere, insists that this is not so much a show about architecture as it is about “sociology, anthropology, and politics.” Casting such a wide and interdisciplinary net is not new for RK, nor is outsourcing a lot of the research. We must recognize the extent to which he emphasizes the deeply collaborative nature of his practice—Countryside had more than 150 collaborators, including AMO director Samir Bantal and agricultural scientist Lenora Ditzler. But at the end of the day, the exhibition’s core subject resembles what might be a direct data dump from RK’s mental sketchbook. Vaguely connected themes tumble breathlessly into one another, from Charles Fourier’s nineteenth-century agrarian-utopian collective-living fantasies to gorilla conservation efforts in Uganda to highly technologized “pixel farming” (best described as agronomy mixed with AI) in the Netherlands. 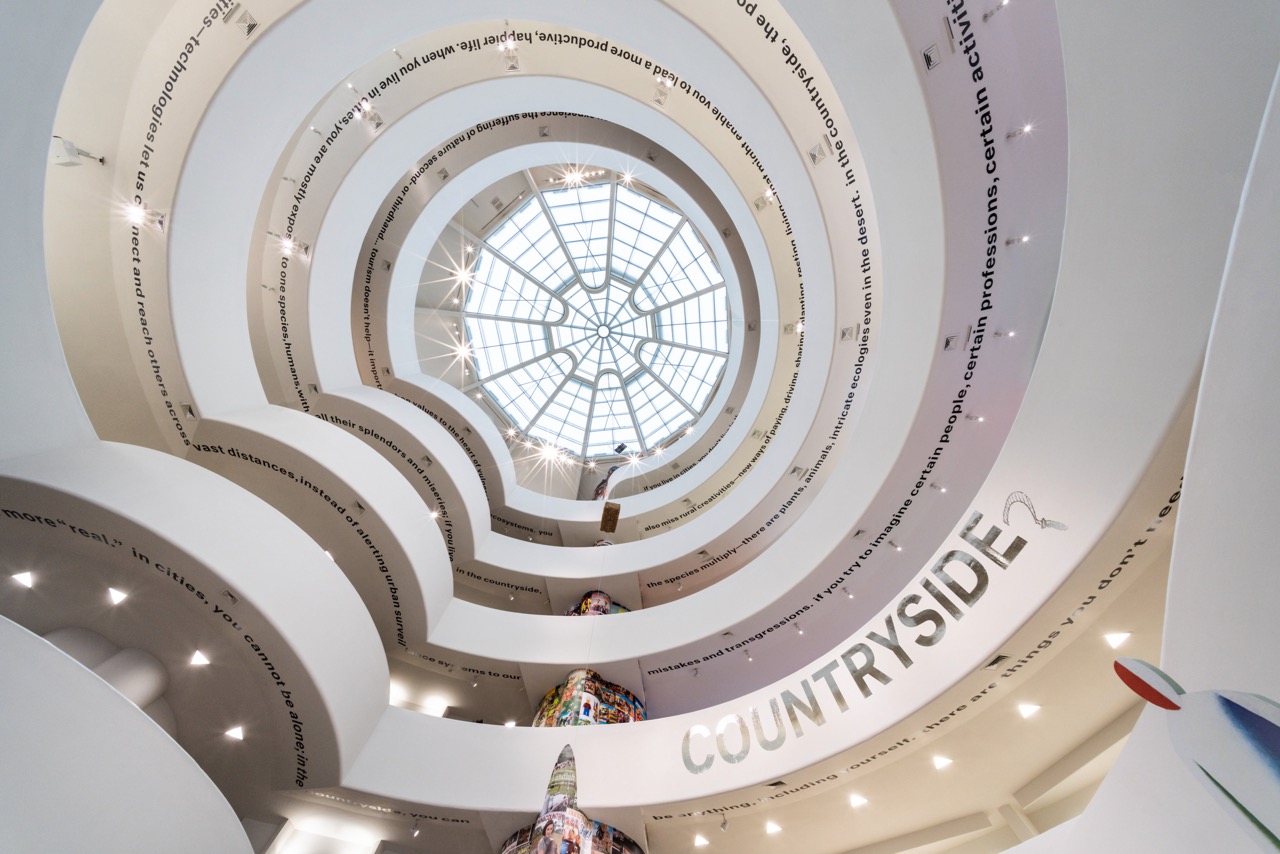 Slogans and queries unfurl along the insides and undersides of the Guggenheim’s spirals, exacerbating the dizziness and vertigo that one habitually experiences at the institution. In the atrium, underneath the bottommost ramp, a visitor reads the following prompt: “the countryside is where our largest threat—warming—is most visible.” I’m troubled that the exhibition does not follow through on the central observation made here: the braided fates of the urban and the rural are of key significance to the multiplied and overlapping perils of the climate crisis. While glancingly recognized, it seems unconscionable not to have put this ever-expanding global menace more forcefully at the core of inquiry.

At the very least, it’s a missed opportunity to hammer home the harsh reality that most practitioners of architecture and urban design have not yet convincingly conceded their responsibility to address the climate crisis head on. Why countryside? Why now? In a piece published in February by the online magazine–streetwear brand 032c, RK gave us a hint: “Globally, if we look at the 50 percent [of the world’s population] who live outside of cities, there are actually two billion people living in the countryside, not working in agriculture. They live in the countryside and we don’t know what they do there.” 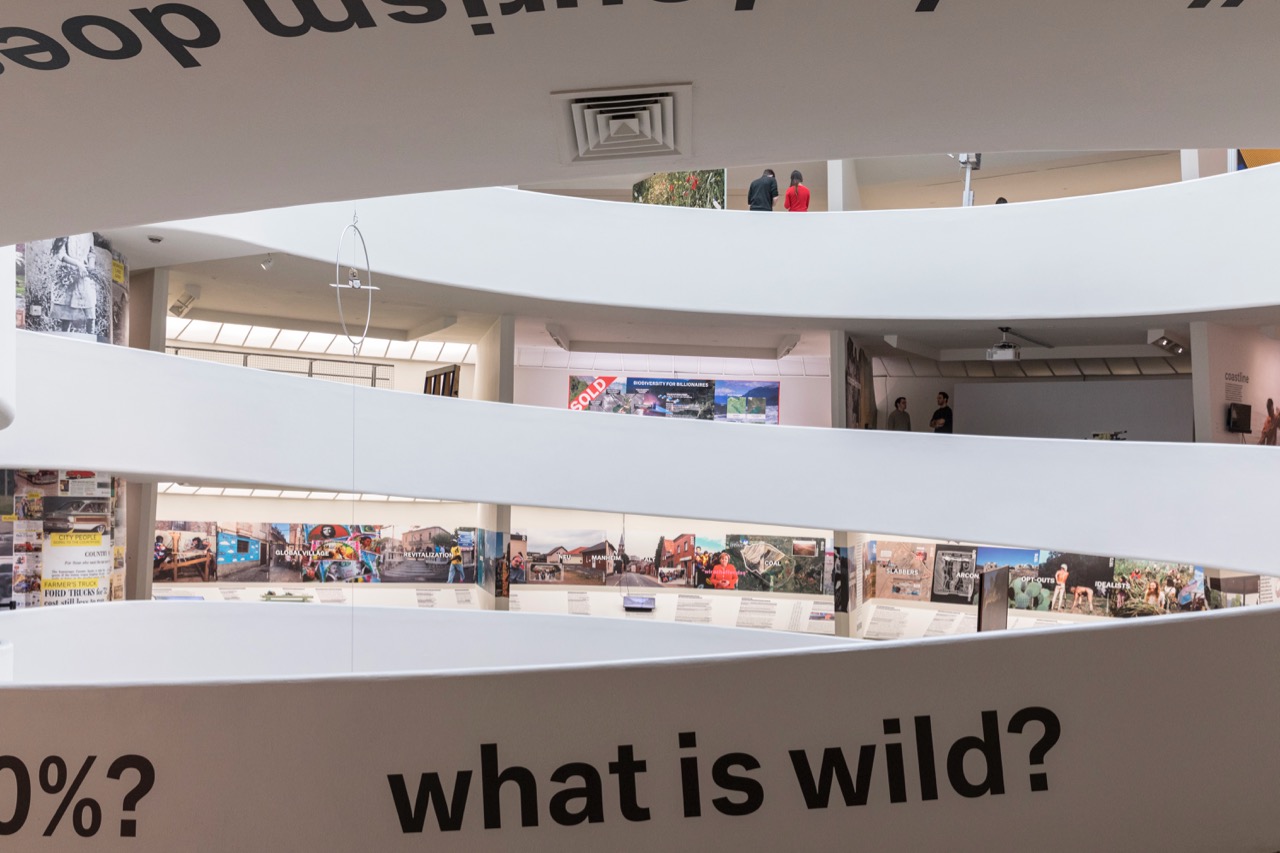 A lot to unpack. First comes the unacknowledged question concerning the definition of the “countryside.” RK makes only the vaguest attempt to define the term or the concept (nor does he provide any reason for choosing the term “countryside” over “rural,” “wilderness,” or “hinterlands”). And while RK may wonder what some of those two billion people living in the countryside are doing, he doesn’t seem to care much about who “they” are or how “we” might benefit from their endeavors materially and intellectually. After we grasp that “they” are predominantly communities of the global south (and after we observe the conspicuous lack of black and brown bodies represented in the show), it’s hard to escape the impression that RK’s case studies were chosen more for their novelty to a US audience and less as exposés of exploitation and injustice. A vignette, which showcases the American Doug Tompkins (founder of Northface and Esprit) and his extravagant conservation efforts in Chile, elides the gross injustices that the country’s governance perpetrated against indigenous peoples. The aforementioned investigation of gorilla conservation in East Africa focuses on the significant efforts to recoup their dwindling numbers by a coterie of American and European primatologists, thus invoking the persistent white-savior complex. Each example runs into the next without a clear sense of logic, absent any internal coherence, and very much indicative of the omniscient Western gaze. 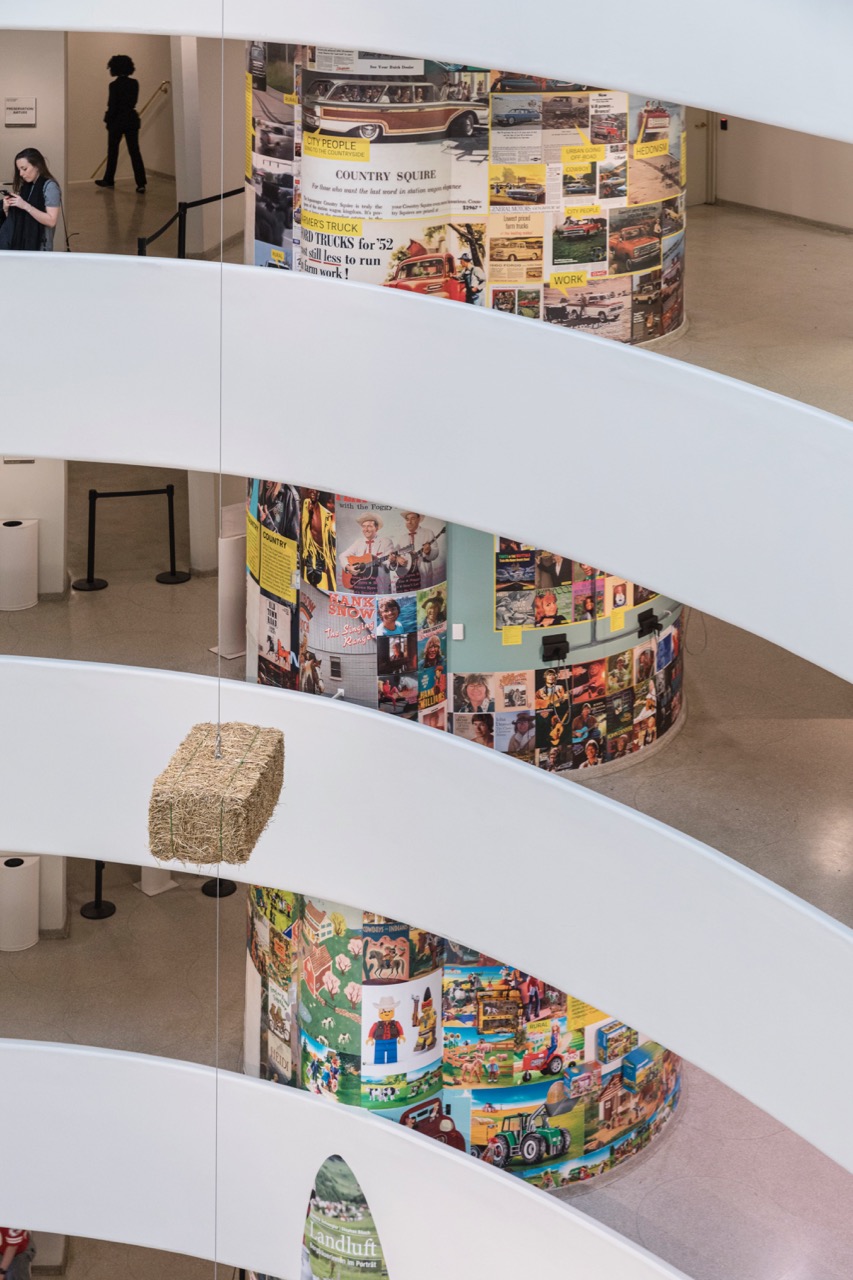 I can somewhat understand the allure of RK’s universe. Working with him is a reliably bankable gambit from which hundreds of former employees and partners have profited. However, I fear that the RK stamp of approval has led to widespread legitimization of the kind of sweeping, universalizing tendencies on display here. The word “country” gets abused in every manner of bumptious cliché, most conspicuously on the so-called “Semiotics Column” that overwhelms the visitor with a never-ending pastiche of magazine covers, toys, advertising campaigns, and country music—often tugged in through the extremely slender aperture of Americana.

Perhaps my biggest misgiving about Countryside, both the research project and the exhibition, is that most indications point to RK having lost his sense of humor (one exception is the catalog cover, which sports a banner proclaiming “COUNTRYSIDE IN YOUR POCKET! $24.95”). The RK who emerges here is guileless, introspective, solipsistic, and above all earnest. He seems devoid of the impishness and mischief that lurked within his past enterprises. Delirious New York: A Retroactive Manifesto for Manhattan, his enduring 1978 study of Gotham, veered from the expertly historical to the amusingly deadpan. The deliriously overweening S,M,L,XL (1995)—a brilliant, 1,344-page vanity project that set the standard for all subsequent “doorstop books” that have become obligatory for any self-respecting architectural practice—managed to vacillate between outrageous proclamations and brilliantly subdued self-reflection. We see flashes of camp and irony in Countryside—for example, mounting Barbie’s Dream Camper and a picture of Lil Nas X with Billy Ray Cyrus near to an ingenious pictograph entitled Statecraft: How the Chinese Government Works does serve to leaven the seriousness of the show’s subject matter, and maybe that’s evidence of the old Rem trying to sneak out of the cellar. 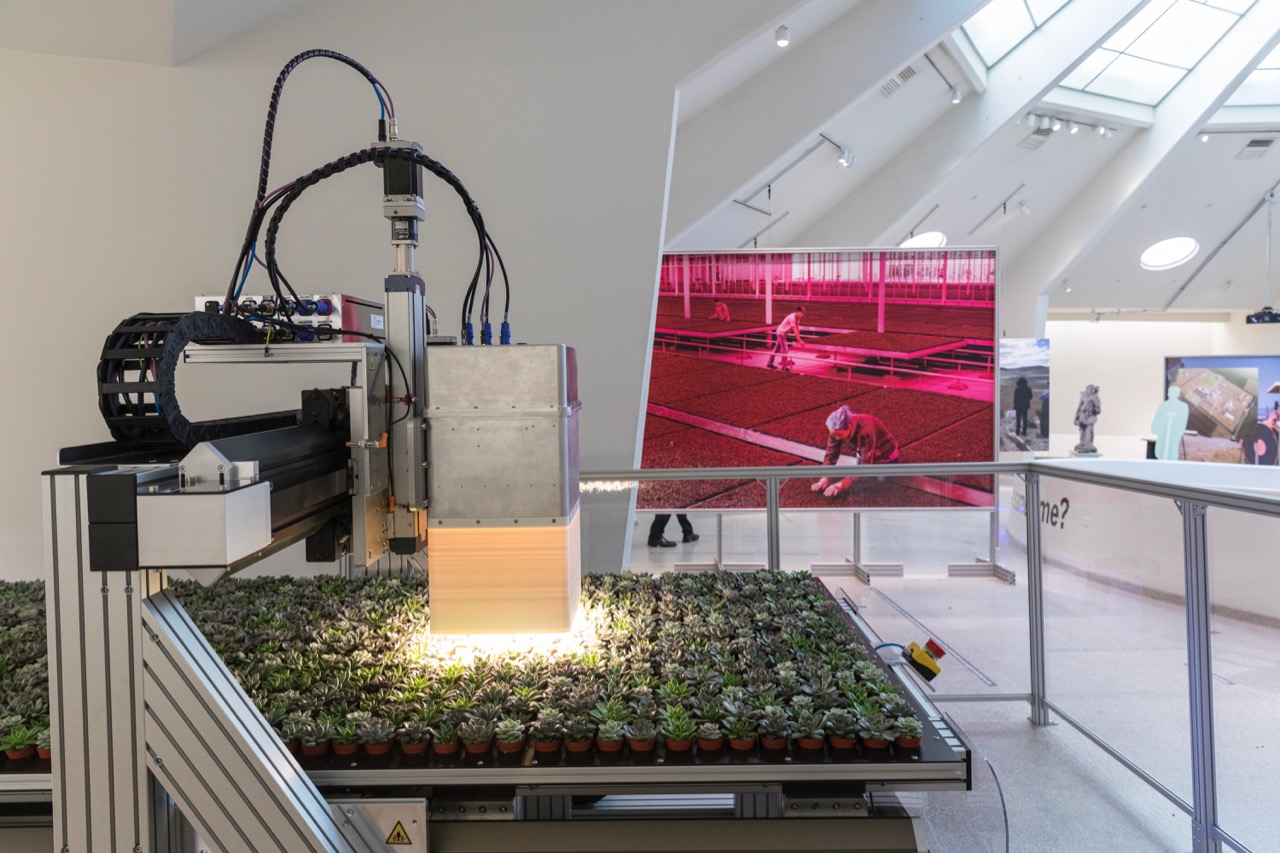 “How do we face a massive crisis at a moment of discredited reason?” This question—quintessentially Koolhaasian in its rhetorical vagueness—is emblazoned along the ramp’s interior wall near the top of the Guggenheim’s spiral. To what crisis is he referring? The climate? RK’s own endgame? Has RK reached the twilight of self-reckoning? In a moment when facile constructions of fact are used to support rickety dogmas, I wish RK had taken the next step and insisted more vigilantly on concrete responses to the crisis—or crises—that he leaves unnamed, let alone reflected upon.

Noah Chasin writes on the intersection of human rights and the built environment in twenty-first-century urbanization. He teaches the history and theory of urban design at Columbia University’s GSAPP, where he is also affiliated faculty at the Institute for the Study of Human Rights.