The documentary and the cinematic: a dual show of the
photographer’s work. 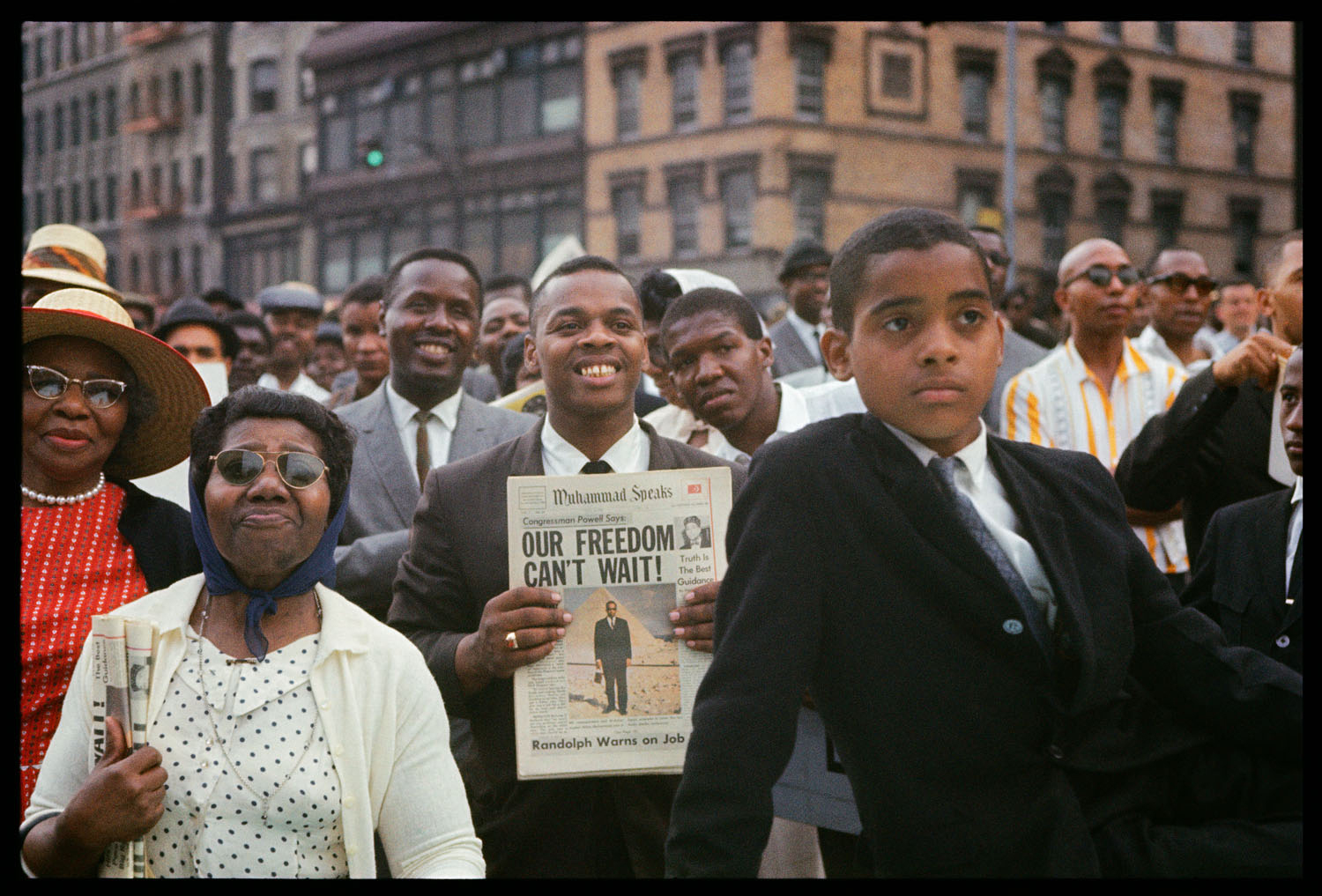 Jelani Cobb, in a short, exquisite essay written to accompany Half and the Whole, an exhibition of photos by Gordon Parks (1912–2006) at the two Chelsea outposts of Jack Shainman Gallery, foregrounds the question of time: “The half million minutes that made up 2020, each of them a timestamp for a period of travail, of plague, of conflict, and of reckoning, seemed somehow longer than a single year . . . But in fact, we needed only nine of those minutes—or to be more precise, eight minutes and forty-six seconds extracted from May 25, Memorial Day—to convey to future generations everything they need to understand what it was like to live through that year.”

If 2020 can be defined by the moments when George Floyd was murdered by a Minneapolis police officer, triggering some of the most consequential anti-racist protests this country has seen in a generation or more, the interval between 2020 and a half century or more earlier can collapse, too, when we view Parks’s images of Black life in the Jim Crow era and its aftermath. They chronicle, as Cobb observes, “a world whose technology, fashion, and characters have changed in the ensuing years but whose fundamental struggles are as familiar as they were at the moment he snapped the photos.” 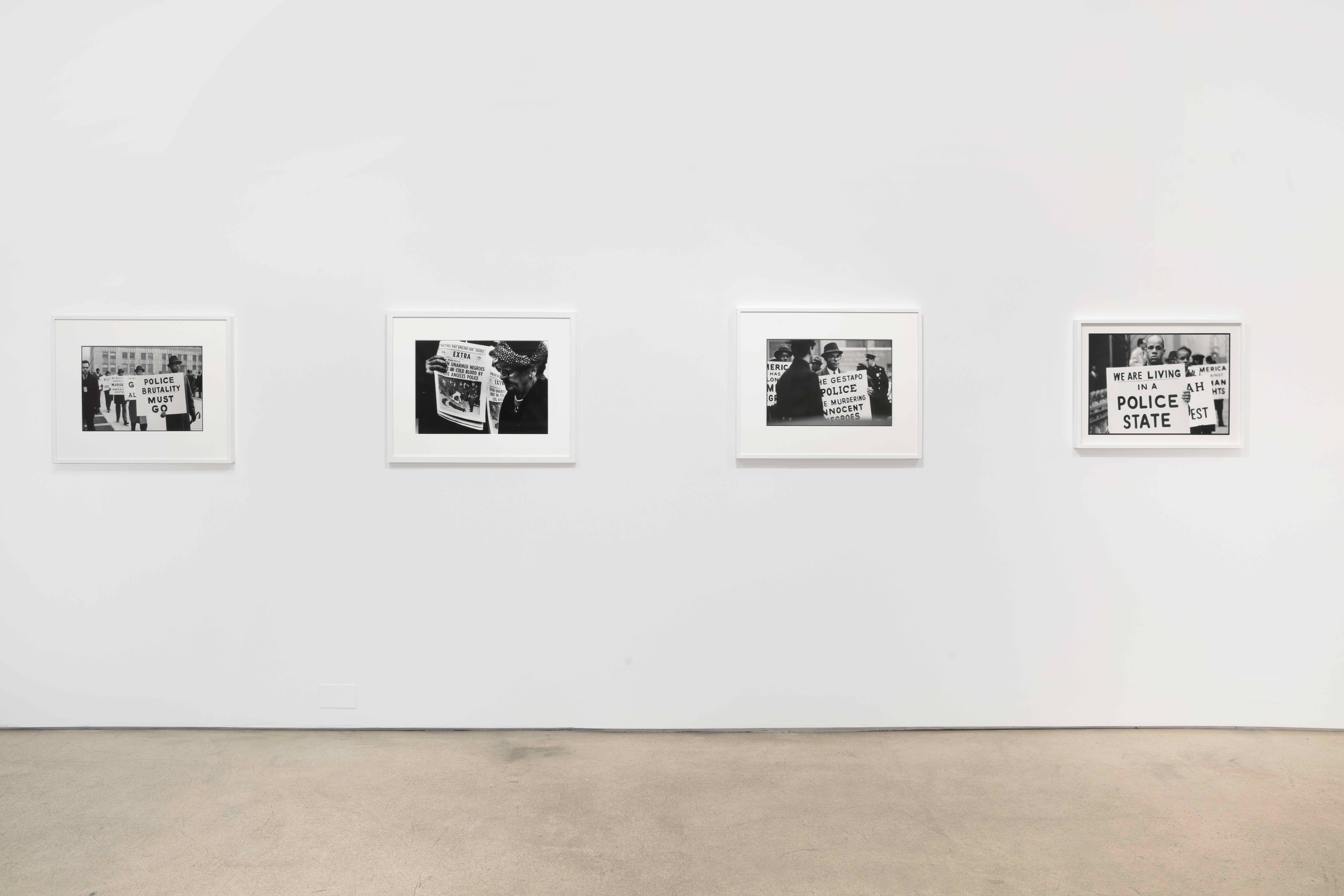 The point seems unarguable when looking at the work on view, which has been carefully selected from a number of Parks’s photographic series, mostly shot while he was employed by the Farm Security Administration in the 1940s or by Life magazine after 1948, when he was hired as their first Black staff photographer. (Many of the photos here were unpublished at the time of their making and have been newly printed and editioned by the artist’s foundation.) One side of the first room in the Twenty-Fourth Street space is dominated by pictures from Parks’s 1963 “Black Muslims” series. Parks happened to be working on this assignment when police shot and killed seven Black men in Los Angeles. His photographs of the protests that subsequently took place in New York are genuinely eerie in their timeliness, thanks to the carefully lettered signs carried by the well-dressed men, in hats, ties, and overcoats, marching in orderly rows and surveilled by white police officers: Do Whites “Love Their Enemies”? Police Brutality Must Go. The Gestapo Police Are Murdering Innocent Negroes. We Are Living In A Police State. A deeply affecting image makes apparent the urgency of the cause: two men holding up copies of a broadside with the headline “Seven Unarmed Negroes Shot in Cold Blood By Los Angeles Police.” The man in the back is Malcolm X. The man in the foreground, sitting in a wheelchair, is William Rogers, who was himself paralyzed in this instance of police brutality. The contrast between the saturated blacks and the crisp whites in this group of gelatin-silver prints was not as apparent when they were reproduced in Life to accompany a story that was meant to reflect, or even stoke, the fear that white America had about the Black nationalist group; but here, in prints made during Parks’s lifetime, the opposition serves an expressive function, highlighting the clean-cut orderliness of the protesters and their disciplined but unapologetic anger. 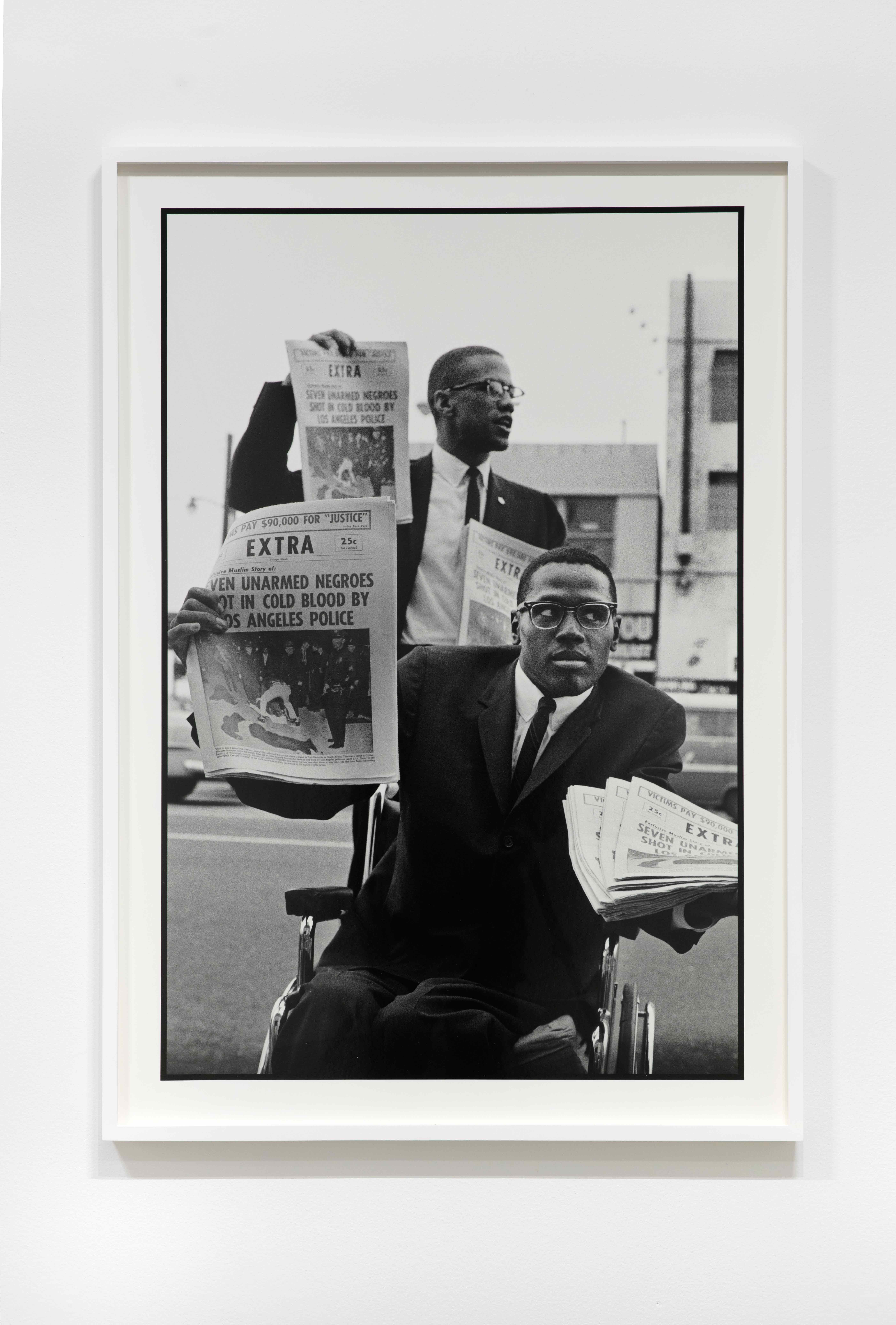 If one of the stories this exhibition tells is that of timeliness—the press release frames Parks’s photographs as “equally striking for their relevance as for their contemporary compositions”—there is another one to attend to as well, signaled by his use of color. Opposite the array of images dealing with police brutality is another set of photos, originally shot on Kodachrome and newly printed, that counter the grim and righteous anger of the black-and-white pictures with a joyfulness and vitality and even, at moments, humor: this is the other aspect of protest. A young child—maybe seven or eight years old—drapes his arms casually over the wrong side of a “do not cross” barrier; a group of men and women raise their arms and clap their hands, smiles on their faces; a sea of hands make a gesture of praise and uplift; a man in the center of a crowd holds a Nation of Islam newspaper with the headline “Our Freedom Can’t Wait!” while those around him beam with happiness, listening intently, or crane their necks to get a better view of the unseen orator. These are images that Life magazine didn’t run with their story, perhaps because they represent not anger but hope—a community coming together, people asserting their humanity. 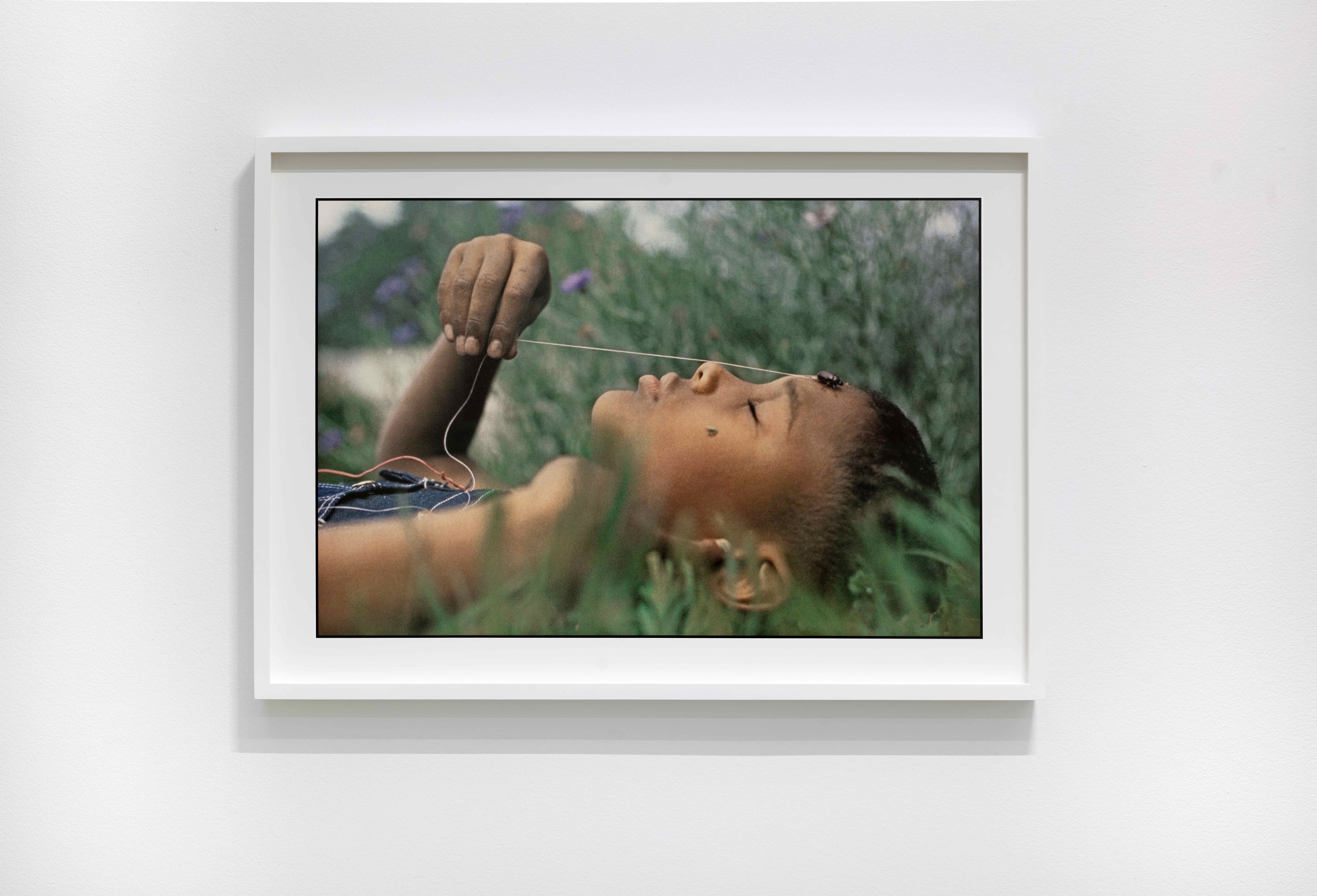 The photos on view at Twentieth Street are of a different tenor: instead of the largely documentary feel of the other half of the show, they seem to revel in the cinematic. (In addition to being a photographer, composer, and writer, Parks was the first Black man to direct a Hollywood studio film—The Learning Tree from 1969, based on his autobiographical novel.) Taken between 1948 and 1963, drawn from multiple series shot for Life, and largely dealing with the subject of children, these pictures show the bittersweetness of life in an overtly and violently segregated America. A young boy from Kansas lies in the grass while a june bug, tied with a string like a pet, crawls on his forehead; naked kids swim in a watering hole; children splash in a hydrant spray in Harlem and jump in puddles in Chicago streets; little girls read a book under their mother’s watchful eye in Alabama. 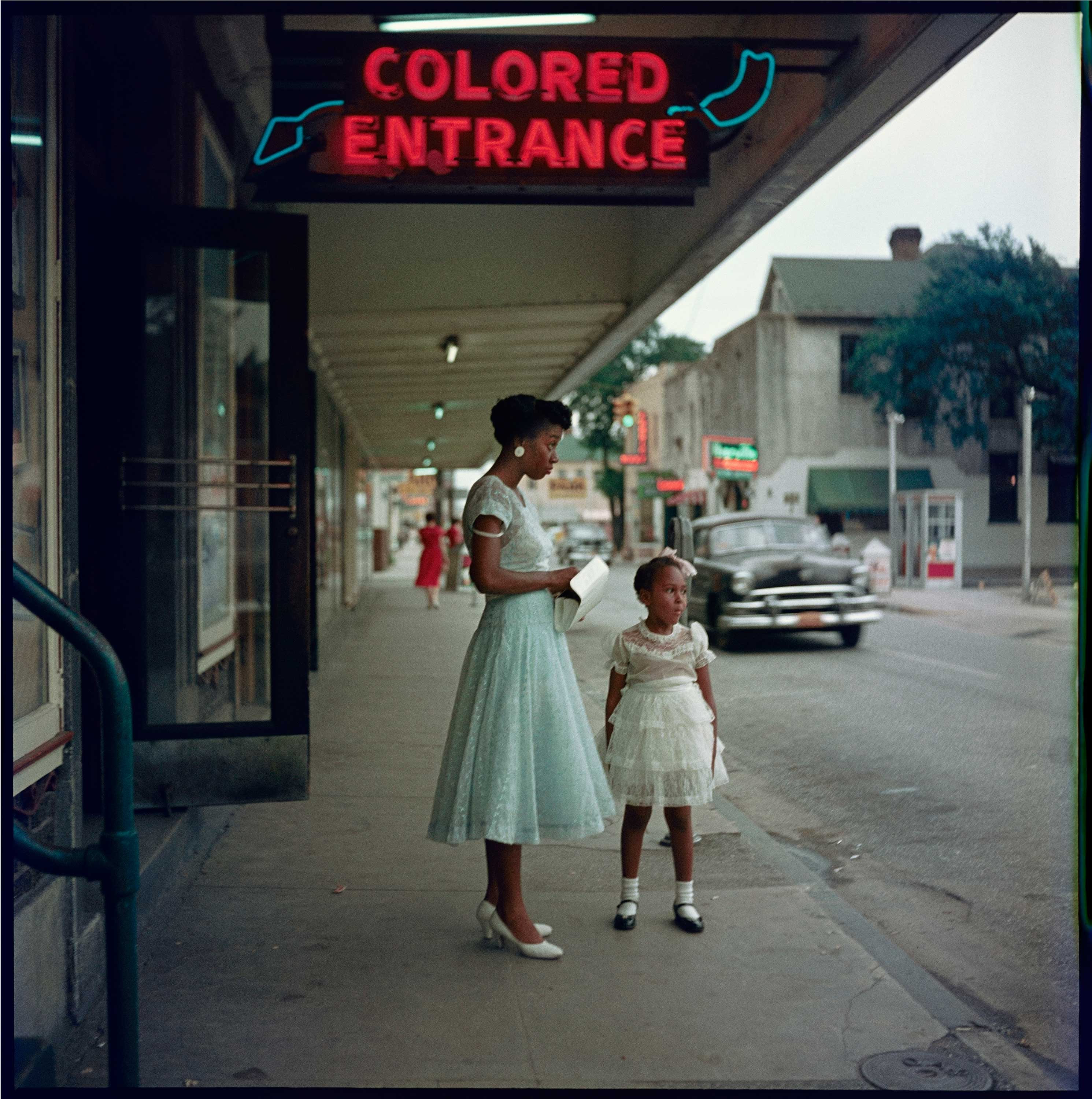 But Parks also created images that show how this gentle innocence was circumscribed. Sometimes the message is clearly apparent—as in his gorgeous and heartbreaking Department Store, Mobile, Alabama (1956), in which an elegantly dressed woman and a prettily turned-out girl stand on a sidewalk underneath a neon sign that flashes “COLORED ENTRANCE.” At other times, it is more subtle, as when we encounter a row of children, seen from the back, as they peer wistfully through a chain-link fence at a park beyond, or when we are faced with a small child sitting at a simple desk as a pair of adult hands dangles two dolls, one white and one Black, in front of him. This latter is no innocuous game, however—the little boy is taking part in the Doll Test, a famous psychological experiment designed by two Black researchers, Mamie and Kenneth Clark, that demonstrated that children as young as three years old had already absorbed negative stereotypes about their own race. 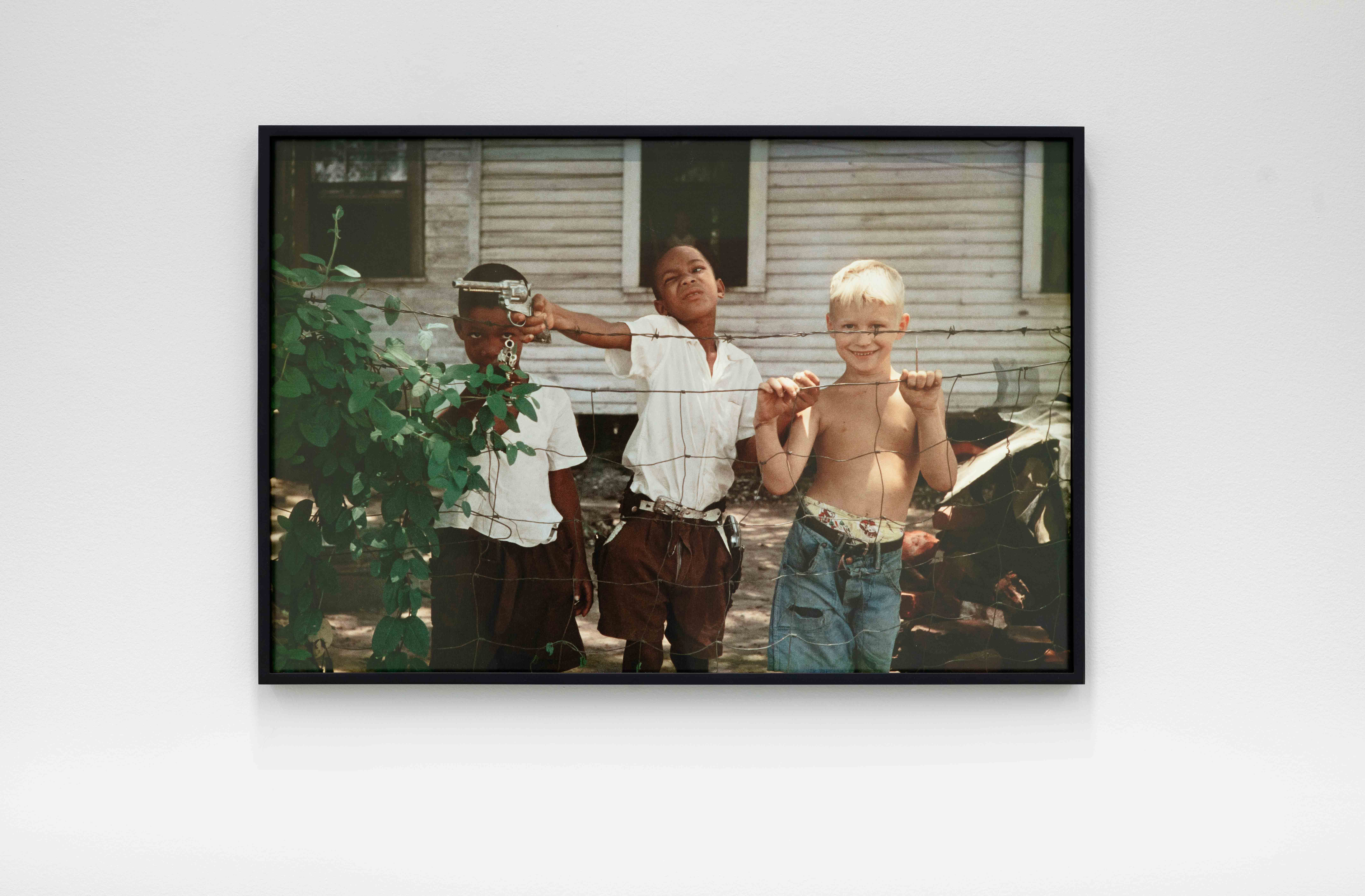 And then there is the moment of shock and fear one feels confronting a photo of three boys—two Black, one white—in the midst of play. The blond boy smiles happily, if a little self-consciously, at the camera; the two Black boys point their toy pistols in different directions, looking suitably fierce. Tamir Rice was killed for doing something similar in 2014. Thank god the person who encountered these boys in 1956 was a Black man with a camera determined to reveal the wholeness of the Black experience, not a white cop with a gun.

Aruna D’Souza is a writer based in Western Massachusetts. She is co-curator of Lorraine O’Grady: Both/And, opening March 5 at the Brooklyn Museum of Art; editor of Lorraine O’Grady’s book Writing in Space, 1973–2019 (Duke University Press, 2020); and a member of the advisory board of 4Columns. In 2020, she received a Creative Capital | Andy Warhol Foundation Arts Writers grant for short-form writing.