SculptureCenter hosts an overview of the artist’s compelling,
unnerving work. 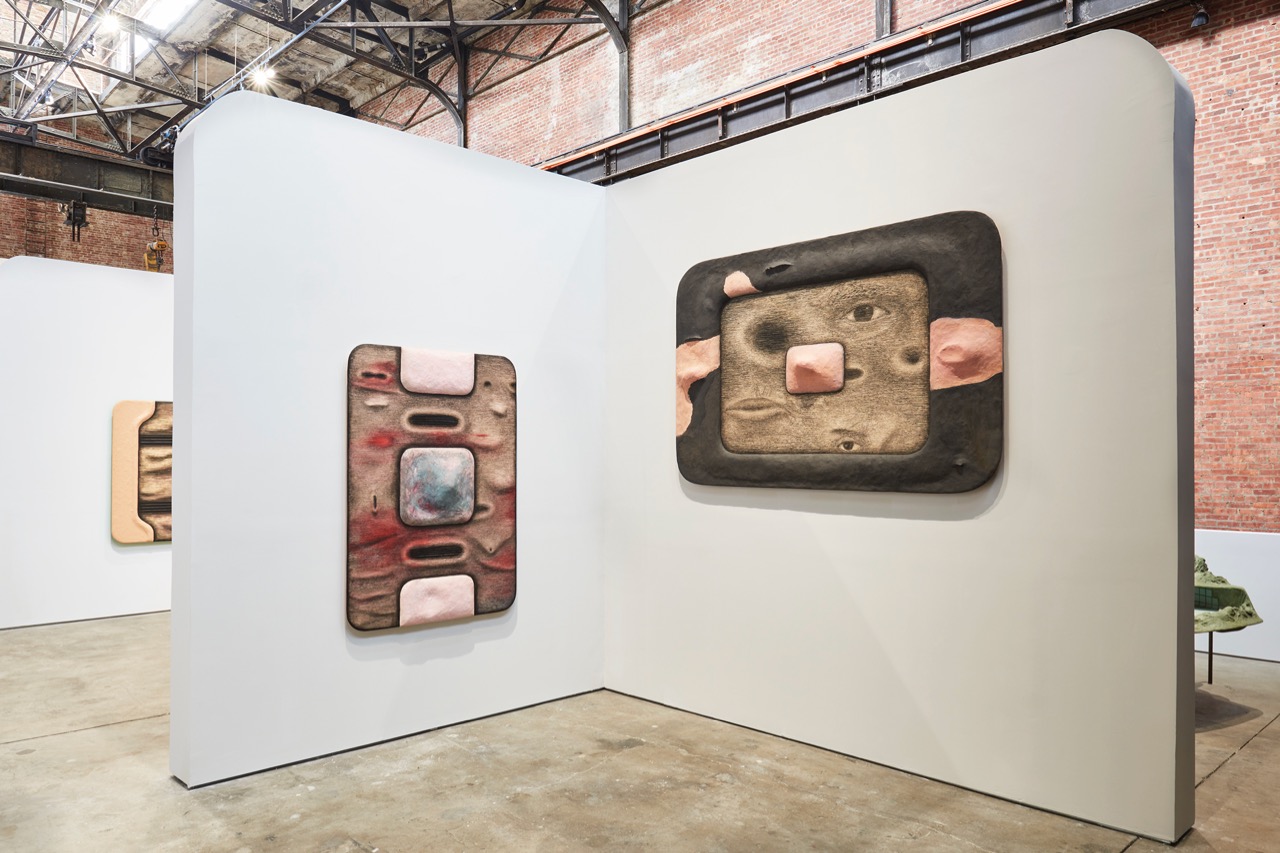 It is perhaps unfashionable to invoke Caravaggio. Yet I have become fixated on his The Incredulity of Saint Thomas (1601–02). That finger in that wound. The superlative work of Tishan Hsu conjures something like this: dark orifices and glaring eyes, wet cavities and lumpy protrusions—though in Hsu’s work, as in much of technologically driven contemporary life, the establishment of veracity by the senses and the complete banishment of doubt both feel like possibilities long foreclosed.

Organized by SculptureCenter, and first on view at Los Angeles’s Hammer Museum, Liquid Circuit is the New York–based artist’s first major exhibition in the United States. This crisp overview of his practice—featuring forty-three works made from 1980 to 2005, including drawings and experiments in video—is a sign of the renewed interest in Hsu’s work. Hsu was far from unknown when these works were made—many debuted at major galleries like Leo Castelli and Pat Hearn—but they were strangely timed, out of step with their surrounds. As Castelli warned Hsu, they “needed a context” in which they would make sense. But the extant context was, instead, the postmodernism heralded by Hsu’s 1980s East Village milieu. Often lassoed by the slightly misleading term “neo-geo,” many artists were then presenting lush, bright geometries, dizzyingly repetitive patterns, and winking pastiches of corporate decor. Paging Dr. Baudrillard. Hsu’s work was a world apart: it does not frolic in the proliferation of pixels nor in the indiscernibility of copies for which ’80s postmodernism is best known, but rather calls forth the ever-tightening tether between body and interface so concerning today. Unbearably prescient in the early ’80s, his work can perhaps only now be readily understood. 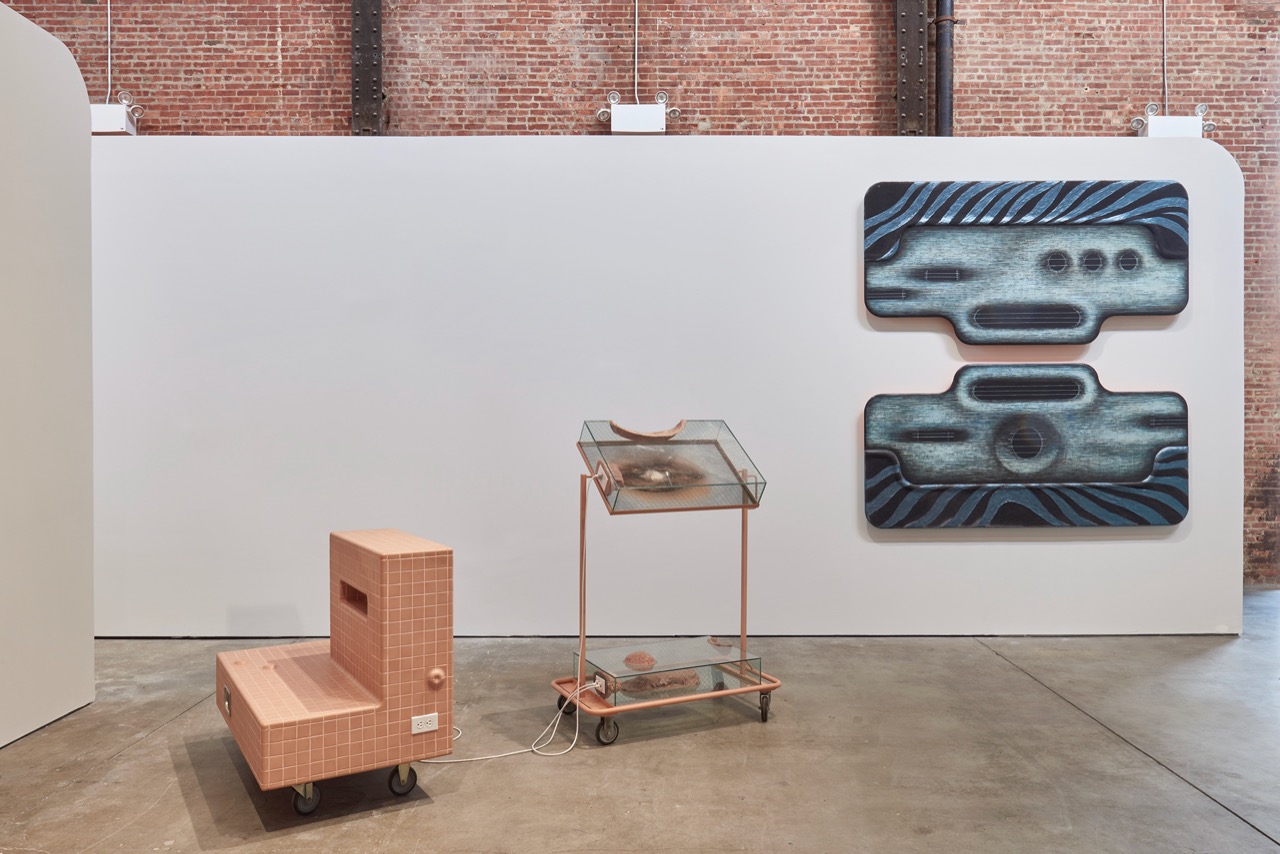 Indeed, today’s vantage gives one the ineluctable sense of Hsu as a premonitory model rescued from the past. The context Castelli said Hsu required would only come much later—Hsu’s closest “peers” are perhaps found in a generation of artists working now: the plaiting of wry, surreal weirdness, technological savvy, and body horror in works by Kelly Akashi, Julia Phillips, Jesse Darling, Olga Balema, Elaine Cameron-Weir, Hanna Levy, and Kevin Beasley, to name too many, but also only a few. That Hsu’s reception throws time askance seems appropriate to his subject matter: the data centers, screens, and medical devices to which his works can allude are themselves means of storage and transmission—after all, what is a computer if not a kind of time machine? 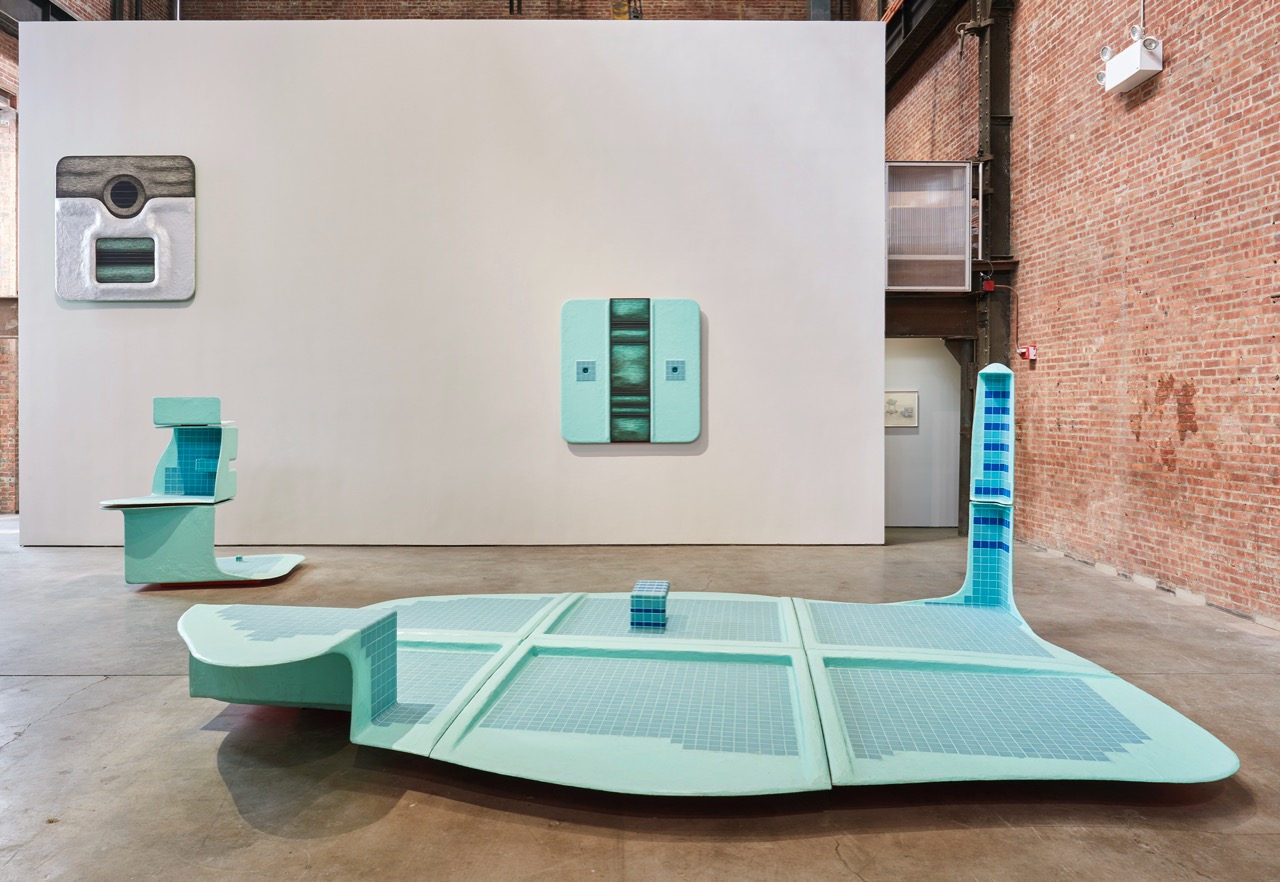 Hsu’s works comprise two major groups: quadrilateral wall-mounted “screen” works, edges rounded and soft, mostly done in industrial materials on wood panels, as in Manic Panic (1987), the twin teal and wavy-striped panels of which nearly kiss in their jutting centers; and sculptural floor works, at once conjuring medical and other institutional spaces, often incorporating ceramic tiles. Consider Ooze (1987), a gridded, architectural maquette that evokes a pool or arena to which it does not permit entry. Semblances of a floor, partial walls, and ledges connote sequestration and physical containment, while the object’s edges, undulating and slicked over in urethane, suggest an unstable entity, seeping ominously outward. Tiles are partial readymades that invite, rather than thwart composition: their colors and sizes are preordained by the gods of industry, yet they are also modular “pieces,” workably systematic. The interest in modularity and segmentation that drives Hsu’s use of tile also often manifests as wood panels, which hug or approach one another in duos or trios. Their arrangements are like pieces fitting together as in a jigsaw puzzle, circuit board, or the articulation of a physiological joint: every penetration met by snug encapsulation. 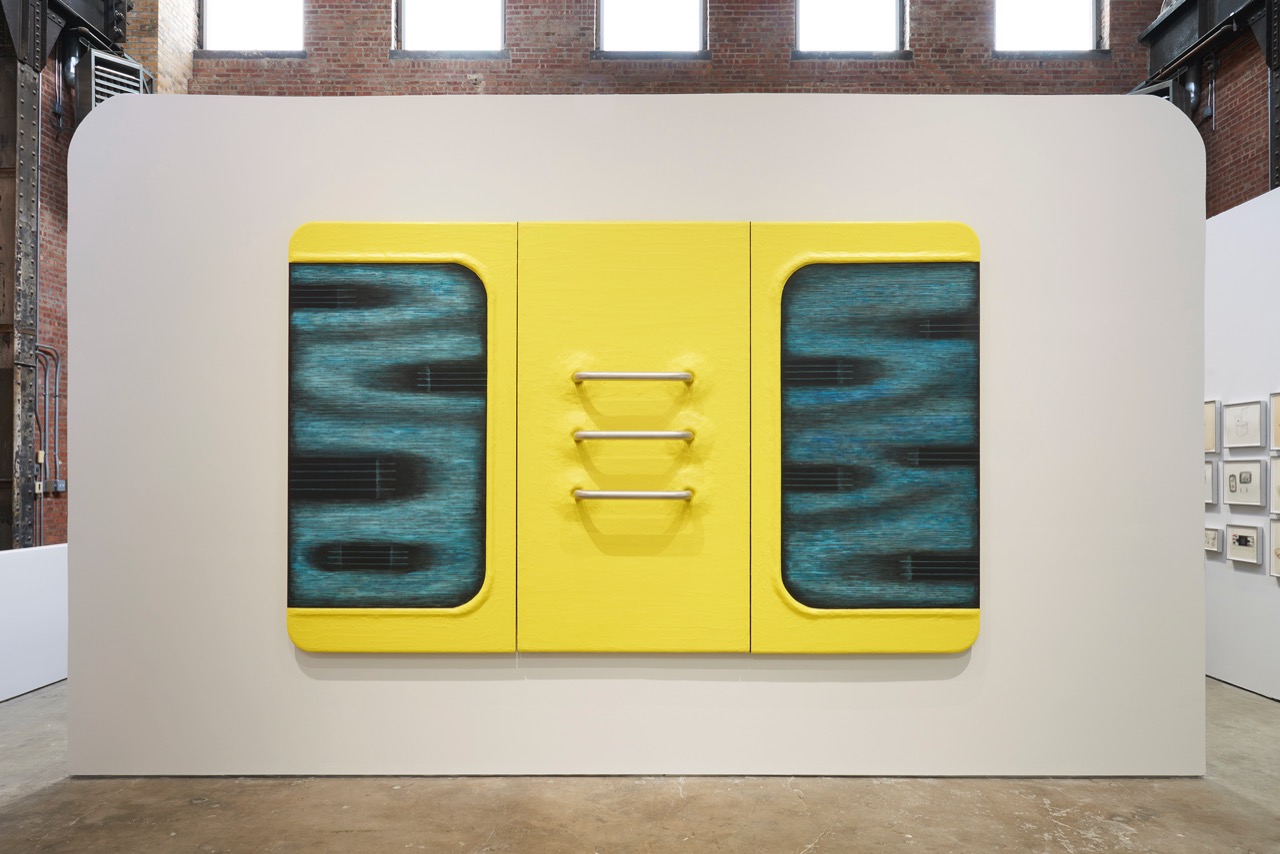 Hsu’s planar surfaces are held aloft by smaller, sharply rectangular supports that have them lurch and float into the gallery, or lift eerily off the floor, as if uncontained by gravity. Some of these mostly hidden wood supports are left raw; in others, Hsu paints their edges in such that the wall behind or ground beneath them seems aglow with color. This visual effect—startling in person—is nearly imperceptible in a jpeg (and perhaps as a consequence is infrequently mentioned in the literature). In Liquid Circuit (1987), three panels draw focus to a center furnished with metal grab bars. Behind them, the supports’ sides are coated in a highlighter yellow paired to its striking front. Plasma (1986), also yellow, is mounted high like a blinking sentinel and backed by cadmium red. Beaming like a mutant HAL 9000, it summons the increasing role of surveillance and capture motoring much technological advance today. 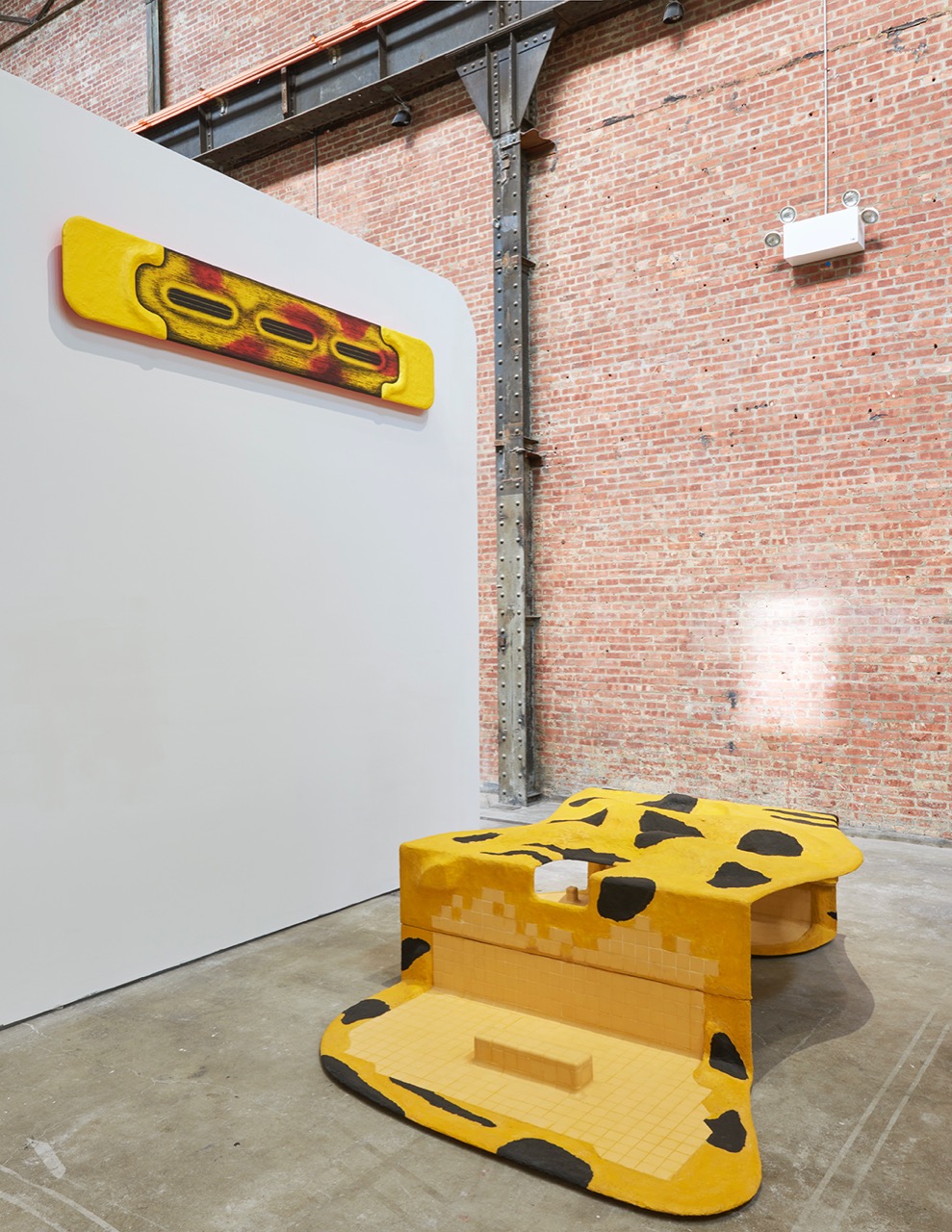 At SculptureCenter, the industrial-lite architecture of which suits the work, the partition walls’ corners are subtly rounded, hearkening to Hsu’s preferred shape. I can’t help but think, admittedly ungenerously, of Michael Fried’s confession that besides revulsion, minimalist sculpture invoked in him a disquieting sense of something or someone in a dark room—a hulking form, waiting to pounce. Hsu takes that feeling and cranks up the dial. 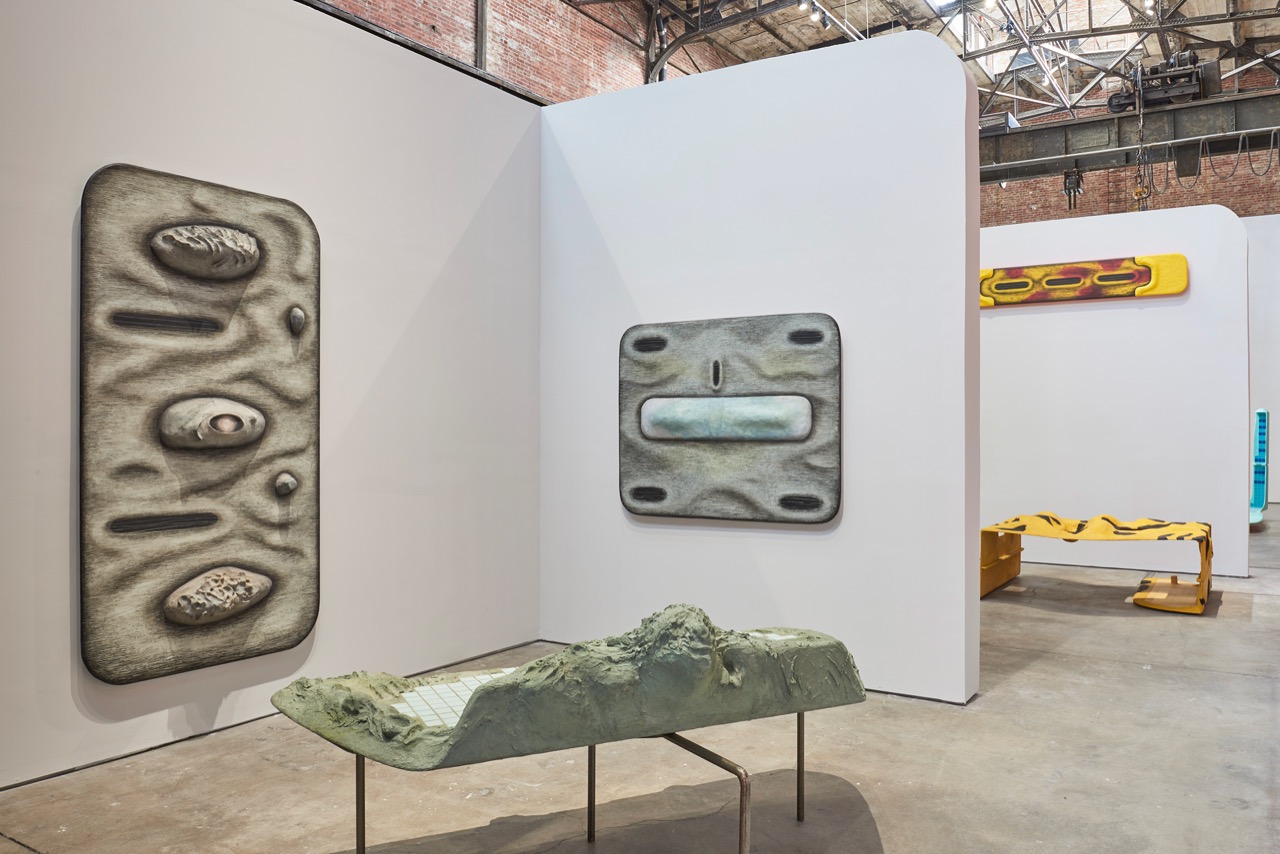 For me, these works are by turns compelling and pleasantly queasy-making, but not without a welcome sense of humor, as in their ba-dum titles such as Holey Cow (1986), a drippy, wide bench in bright yellow shot through with apertures and Holstein-black splotches alike. In another macabre joke, Heading Through, of 1984, four welded steel legs support a tiled carapace, parallel to the floor; divots in the planar surface suggest orifices as much as VCR or ATM slots. The creature figured is as if Gregor Samsa were filtered through the lenses of David Cronenberg and, with its pastel aquamarine tiles, Wes Anderson. The humanoid face thrusts forward, like a heraldic ship’s figurehead, but also like Rodin’s wretched figures, which can seem to be writhing out of their abstracted bronze grounds. This sense of physiological imbrication with technological device is similarly present in Virtual Flow (1990–2018). Here, we see a low-slung monitor connected by outlet, plug, and cord to a futuristic medical cart (procedural use unclear), on which a set of vitrines encases fleshy silicone agglutinates. 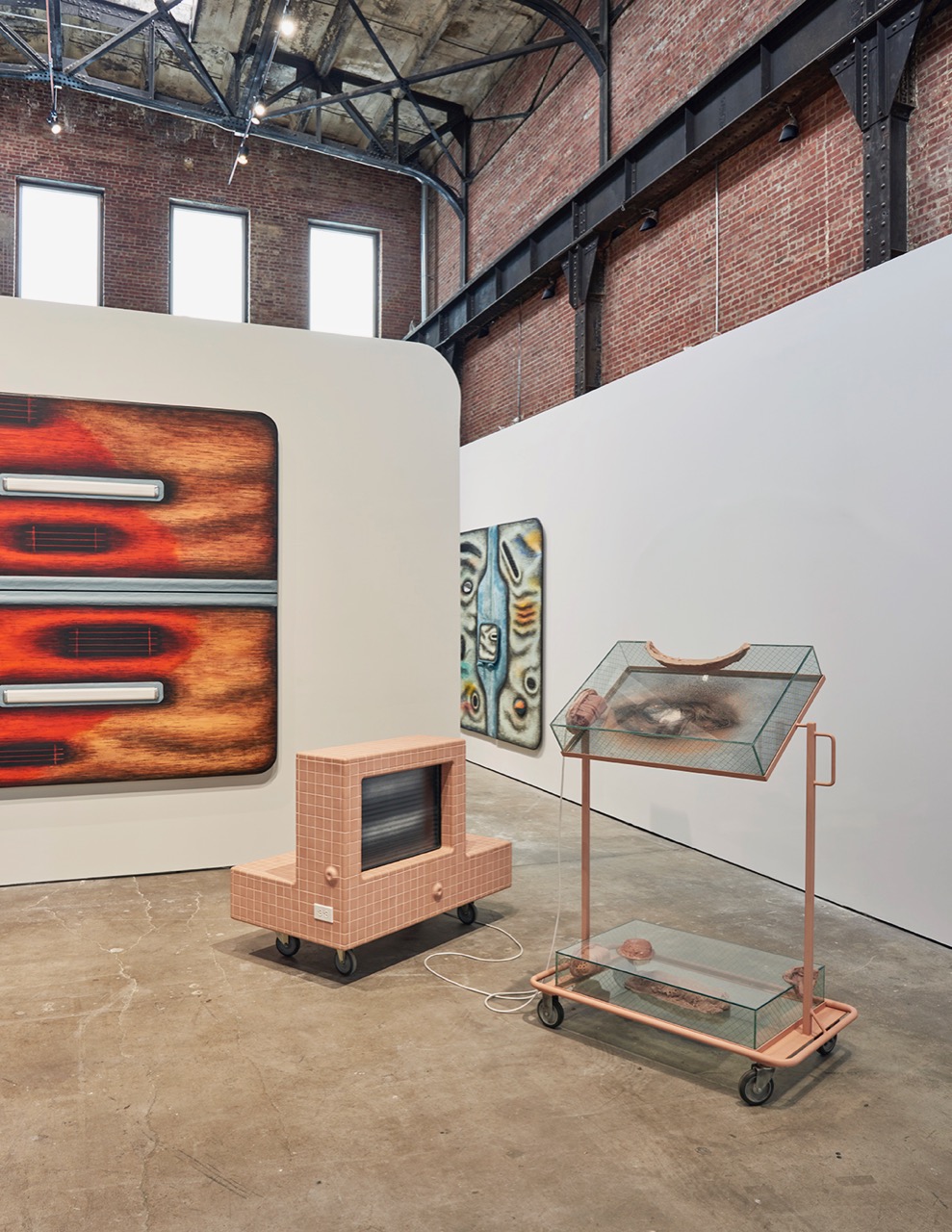 Hsu has long eschewed articulations of his work through that choking diaphane called “identity.” This is true even in a recent project that draws from family photo albums found in Shanghai, a place he did not know in his youth, but where he has recently spent a few years living and working in the wake of his mother’s death. When Hsu found the albums, many images were missing—a removal attributed to the Red Guards. In the resulting works, he elides these representations still further: warping and eroding them, covering faces with cells in the indelible green of early digital screens’ phosphor type. These most recent endeavors are not represented in Liquid Circuit, but their emergence perhaps elucidates how, for the last forty years, Hsu’s interest has not been in the self, nor the individual’s subsumption into technology, but rather in a larger political economy of visual culture, the digital forms of which are never—despite loud claims to the contrary—truly immaterial. From vast server farms to cobalt mining in the Congo to the manufacturing of chip boards and precision plastics in places like Malaysia and Shenzhen, the smooth interfaces of our digital lives are made possible by environmental degradation and mass immiseration at the hands of both corporate evil and our own complicity. It’s a wound so big you don’t have to stick your finger in it to believe.

Catherine Damman is currently a Visiting Assistant Professor of Art History at Wesleyan University and a Core Lecturer at Columbia University. Her writing on experimental dance, theater, film, music, and the visual arts can be found in Artforum, Bookforum, Art in America, Art Journal, BOMB, and elsewhere. She is at work on her monograph, on the formation of “performance” in the 1970s, The Work of Art in the Age of Half-Hearted Reproducibility.