Nonfiction
To Be a Machine

Biohackers, sexbots, and severed heads: a look inside contemporary transhumanism. 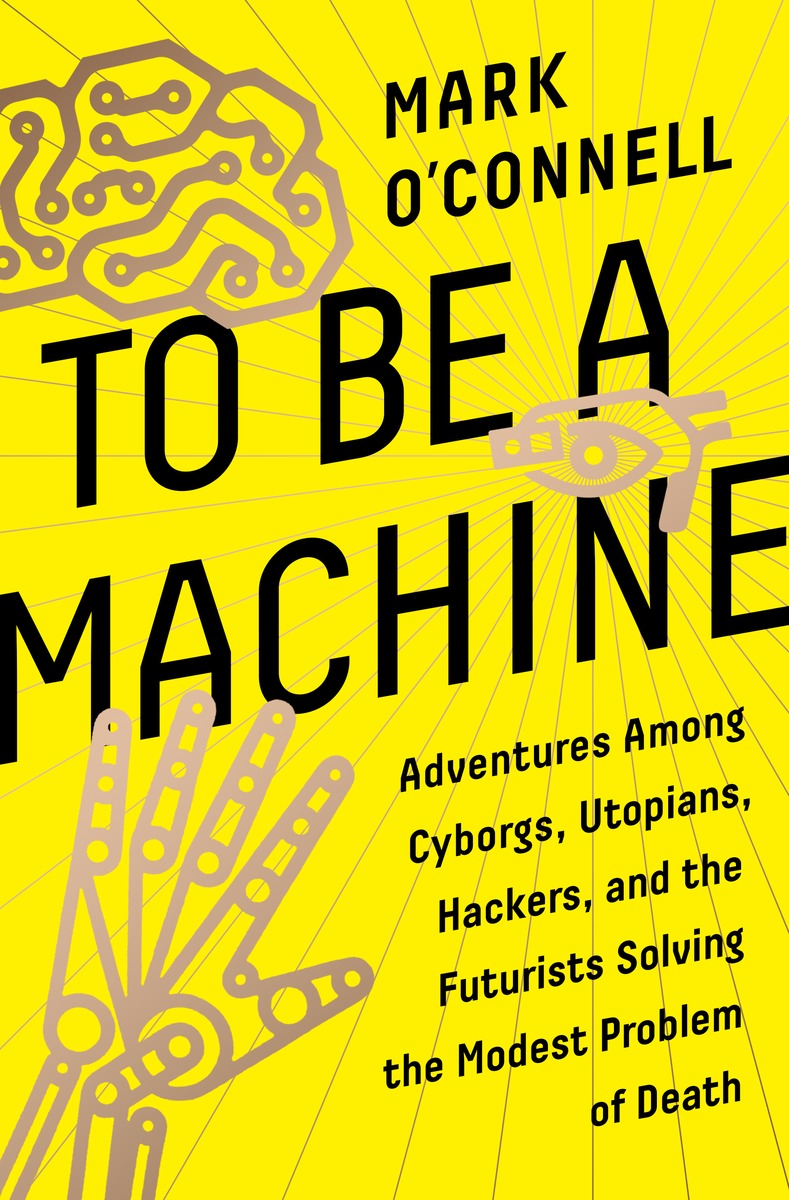 To Be a Machine: Adventures Among Cyborgs, Utopians, Hackers, and the Futurists Solving the Modest Problem of Death, by Mark O’Connell, Doubleday, 241 pages, $26.95

“We exist, we humans, in the wreckage of an imagined splendor.” So writes the Irish critic and essayist Mark O’Connell, introducing his smart and stylish account of contemporary transhumanism. The rogue scientists, evangelical entrepreneurs, and basement-bound hobbyists who populate To Be a Machine all share a conviction that “we can and should use technology to control the future evolution of our species.” In their ambitions—vastly extended lifespans, titanic brainpower, a final unhitching of transcendent mind from the body’s trash—they resemble certain mythic reachers: Prometheus, Achilles, Daedalus, Gilgamesh. In their ambitions, and also in their failures. To Be a Machine cannily and comically describes the all-too-human vulnerability at the heart of the desire to become inhuman.

The task O’Connell has set himself depends as much on fleshspace reportage and interviewing skills as on an analysis of his subjects’ wild projects and often weirdly ad hoc inventions. He fetches up first near Phoenix, in the largest of the world’s four cryonics facilities, where a man with “the thematically consistent name of Max More” presides over 117 frozen “patients”—some whole-bodied but most, because it’s cheaper, curtailed to a severed head or “cephalon.” (O’Connell is deliciously alert to the verbal comedy of euphemism; the zoological word “cephalon” fails to distract from the dire image of postmortem decapitation.) Cryonics, whose adherents wager one day to be woken in a bright medico-technical dawn, makes O’Connell think of the Catholic concept of limbo. That or “a Hail Mary pass into the end zone of the future.”

Of course there would be no need to have yourself bottled and chilled and shipped to Phoenix if you could abstract your cephalonic payload to a supercomputer and survive as pure data, ready to be deployed in whatever machinic body you so desired. (Or not: you might feel that immateriality was your thing.) This is the future being contemplated—no, practically prayed for—by fanatics of mind or brain uploading, who hope “to translate the inscrutable code of nature into the vulgate of machines.” Never mind, as one skeptical scientist interviewed by O’Connell contends, that the human brain has more in common with a flock of birds or a school of fish than it does with a laptop. Various “for-profit entities”—their funders include the likes of Peter Thiel—are pursuing the thought (it is still only a thought) that the brain could be scanned and its contents liberated from the frail “substrate.” As O’Connell puts it, “Having undergone a procedure like this, you would exist—to the extent that you could meaningfully be said to exist at all—as an entity of unbounded possibilities.”

You may have gotten the sense already that O’Connell is a writer of elegant precision and winning facetiousness. Each of his encounters—whether he’s reporting from a military robotics show, going down to the lab with “biohackers” who tuck bits of tech beneath their skin, or meeting Aubrey de Grey, a British gerontologist who plans to live for a thousand years—has the air of a superlative New Yorker-style essay or profile. Schooled on such writers as David Foster Wallace and Nicholson Baker (who supplies a dust-jacket endorsement), O’Connell uses his relative naivety about technical matters to coax intimacies as well as arguments from key and peripheral players in the transhumanist movement. A virginal biohacker explains that he’s ardently awaiting the development of sexbots. Max More, the cryonics guy, admits that he changed his name from Max O’Connor, because the Irish surname “connotes backwardness.” O’Connell leaves the resemblance to his own name unremarked, but surely not unnoticed. His ear and eye for detail are prodigious: at one point he pauses among the brain-uploading researchers to observe “fine slices of rodent brains preserved in glass like ostentatious servings of neural carpaccio.”

One reason I’m insisting on the book’s style and wit is that O’Connell’s writing—full of high-low swerves and personal asides—is a constant reminder of the bathetic reality of being human. He confesses: “In investigating what it meant to be a machine, I must tell you that I also wound up substantially more confused than I already was about what it meant to be a human being.” One of the things being human entails today is a crankish discontent with our bodies that explicitly recalls the transcending ambitions of Christianity—and its contempt for incarnation. Time and again O’Connell meets youngish men (and a very few women) who speak of the body as so much obsolete hardware, a hunk of expired meat they will be happy to leave behind. If “happy” is the word—for just like religious and ideological enthusiasts of the past, the transhumanists seem a joyless fraternity, even as they anticipate the moment of technological Singularity, when Richard Brautigan’s “machines of loving grace” will subsume and sustain our intelligence.

For all his bemusement and distaste at the prospect of living for centuries while bristling with prosthetics, or being sublimed as pure mind into the digital ether, O’Connell takes his subjects’ hopes and fears entirely seriously. (His book’s title comes from Andy Warhol, who knew a thing or two about physical frailty and the fear that drives our efforts to make pristine doubles of ourselves.) The transhumanists have simply exaggerated a venerable truth about being embodied, which is that we are never entirely ourselves in the first place, machines or no machines. That is a metaphysical insight but also a mundane one, which O’Connell brings to mind in these funny, wise pages while he is poleaxed with a hangover and again while happily drugged and watching, onscreen, technology invade his body during a colonoscopy. The best reminder, though, is the animal love that he has for his young son, who takes him out of himself to where the human code travels onward, adventuring.

Brian Dillon’s books include The Great Explosion (Penguin, 2015), Objects in This Mirror: Essays (Sternberg Press, 2014), and The Hypochondriacs (Faber & Faber, 2009). He is UK editor of Cabinet magazine and teaches at the Royal College of Art, London. His new book Essayism will be published by Fitzcarraldo Editions in June 2017.