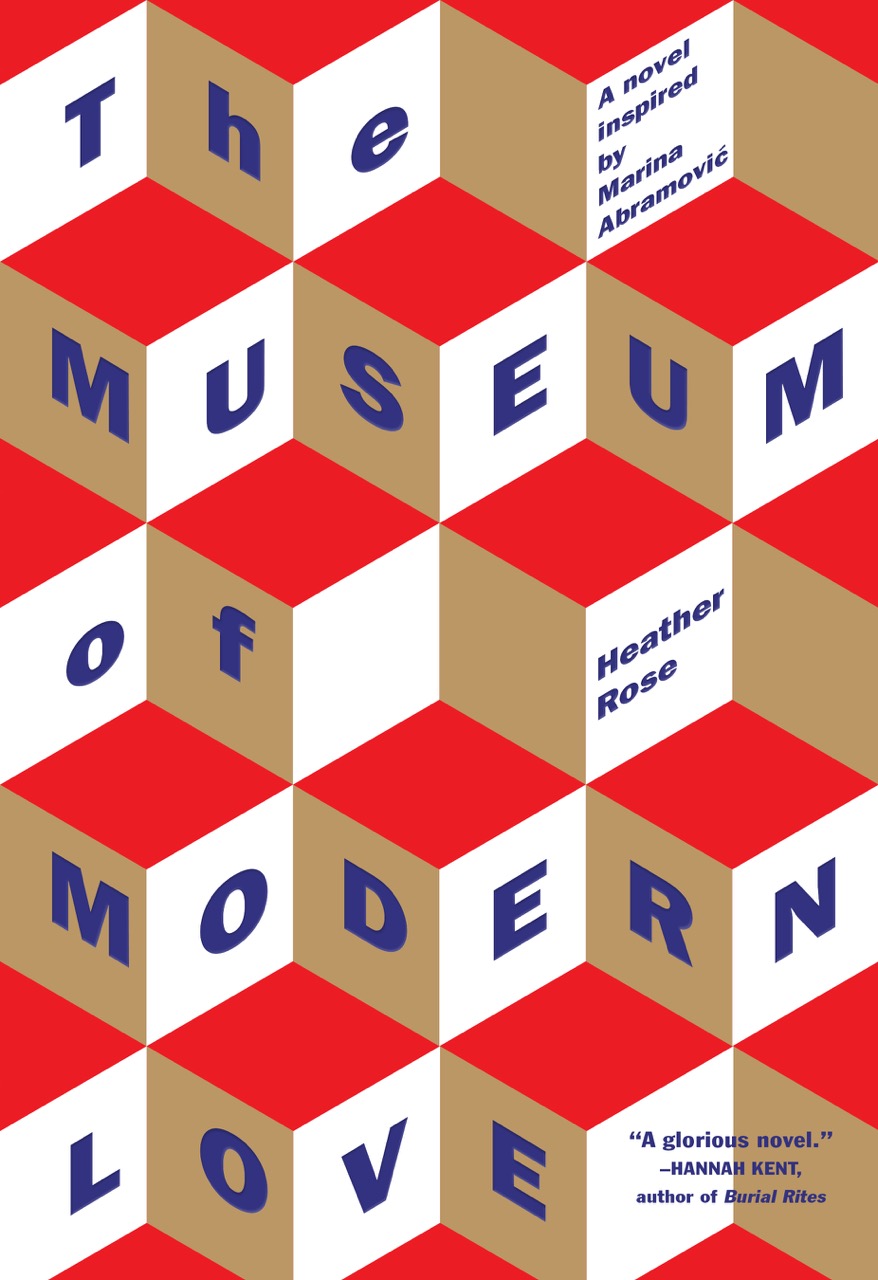 I regret not staring into the face of Marina Abramović. During the run of The Artist Is Present, her 2010 retrospective at the Museum of Modern Art in New York, she sat in the atrium for seventy-five days, receiving viewers, letting them look into her face and looking back into theirs. When I went to MoMA an hour before it opened on a midweek morning, the line to take part in the performance was already twenty deep, and having read that visitors tended to sit for about ten minutes, and some much longer (no limit was imposed, besides MoMA’s hours), I calculated that the wait would be at least three hours—unbearable! So I will never know what the experience of that work was like.

But now, thanks to Heather Rose’s novel The Museum of Modern Love, which takes place in and around The Artist Is Present, I’ve come to understand it as a sort of vision quest, where Abramović serves as hallucinogen. Sitting opposite her, one character—a film composer—sees Abramović’s face transform into a bird, a monk, a tree, and a crystal; he imagines being with her on a desert planet, beneath two moons in a magenta sky. Another character, a skeptical art critic, lets his mind pick over the compromises he and his wife have made for the sake of their marriage. Much to his dismay, he sheds a tear. A more sympathetic art critic is transported to a dinner in Australia with her late husband. A doctoral student from Amsterdam, who is writing a dissertation on Abramović, is aiming to sit for at least twenty minutes, and to make the time go by more quickly she distracts herself by remembering anecdotes from the artist’s life, like how she played Russian roulette as a child. Gradually the student opens herself to emptiness and sees a prettily wrapped package appear in the space between Abramović’s face and her own. She unwraps it to find her soul, “dark and eternal like starlight but shaped like a small mochi ball.” She eats it.

Rather like Abramović’s work, The Museum of Modern Love is breathlessly mystical, embarrassingly earnest. In an essay published in the Algonquin Reader, Rose recounts how she became fixated on the idea of writing a novel about a performance artist with Abramović’s endurance and resolve after visiting a Melbourne museum and happening upon documentation of Rhythm Zero, a 1974 piece in which the Serbian artist sat in a gallery and invited visitors to use any of seventy-two items—from a rose and a feather to a whip and a gun—on her body. After flying from her home in Tasmania to New York in 2010 to see The Artist Is Present and sit with Abramović four times, Rose knew she could not fictionalize her—she had to write about Abramović as she really was. She secured Abramović’s permission to use her name and biography and conducted several interviews with her as part of the research.

Rose’s previous three novels have dealt with topics like murder, political intrigue, American Indian ritual, and Tasmanian lore. Art is a new subject for her. If the way she writes about it can strike insiders as naïve, it’s also fresh and unexpectedly inventive—naïve in the best way. Perhaps unintentionally, Rose has produced a fascinating experiment in art writing. Seasoned authors of hybrid fiction-criticism, like Lynne Tillman and Chris Kraus, tend to use the intense subjectivity of first-person narrative to dramatize the effects of various artworks on one character’s mind. Rose, however, exploits the forking paths of free indirect discourse, its alternation of impersonal exposition and interior monologues from different characters, to show the myriad contingencies of viewer response to a single work. She explores how the personal associations that each person brings to The Artist Is Present open up new meanings.

Arky Levin, the film composer who sees Abramović turn into a bird, is the visitor to whose life Rose pays the most attention. He comes across the performance by accident, after a colleague suggests he check out the Tim Burton retrospective that overlapped with Abramović’s. He gets sucked in, and returns to MoMA every day, spending hours watching people sit with her, having conversations with strangers waiting in line. As museumgoers contemplate Abramović’s retrospective, thinking and talking about her work, Rose plays idiosyncratic, individual experiences of the art—experiences rife with tangents, pivots, and half sequiturs—against professional interpretations of it from critics and curators. There’s a lovely moment near the beginning when a widow from rural Georgia puzzles over the wall text that says Abramović’s performance “distorts the line between everyday routine and ceremony.” “Rather like Karl being dead,” the visitor thinks, recalling her husband. “His death had distorted the everyday routine.”

As much as I like the idea of using fiction to present opposing approaches to a work of art, the novel’s execution would be more compelling if something were at stake in this conflict—if Rose had robustly depicted a system of values where The Artist Is Present is possibly less than heartbreakingly brilliant. No one introduces doubt without being a dick about it. There are bad men who scoff at their wives’ and girlfriends’ appreciation of the great Abramović. The skeptical critic cannot understand why Abramović made him cry: his analytical faculties quiver and collapse under the force of her will. As critic Rhonda Lieberman said, “Marina Abramović is where irony goes to die.” The Museum of Modern Love is written in the shadow of that death.

For Rose, art is a well of self-help wisdom, an aid to experiencing life more intensely, and artists are the precious angels who bring it into the world. “Artists run their fingers over the fabric of eternity,” she writes. Rose sacrifices any guise of plausibility in order to speak in the voices of spirits. The identity of the narrator, who pipes up at erratic intervals, is never explained, and I could only deduce that she is an ethereal, immortal presence—a muse. “I have stood beside artists a very long time,” she says, and later elaborates: “I am assigned to stand beside them—memoirist, intuit, animus, good spirit, genius, whim that I am. House elf to the artists of paint, music, body, voice, form, word.” There are also passages written from the perspective of the ghost of Danica, Marina’s mother, as she haunts MoMA’s galleries.

The Museum of Modern Love is strongest in its account of the mundane strangeness of hanging around the atrium, watching Abramović and her sitters. These parts make me wish I’d withstood the line, not even to reach the chair, just to be there. I like the way Rose describes the place of art in the wandering, questioning minds of its audience. I like it when she solves the mystery of how Abramović peed. The muses, ghosts, and saturated tones of visionary ecstasy get in the way of these expressions of art’s potent ordinariness. They give up the novel’s potential to be a museum of truth.

Brian Droitcour is associate editor and online editor at Art in America. He is also the editor of The Animated Reader, a poetry collection produced for the New Museum’s 2015 Triennial; Provision, a temporary magazine of critical writing for the 2017 edition of Converge 45 in Portland; and the People’s Guide to the Queens International, for the 2018 edition of the Queens Museum’s biennial.