The museum’s most famous show is full of diversity and social engagement, but to what real end? 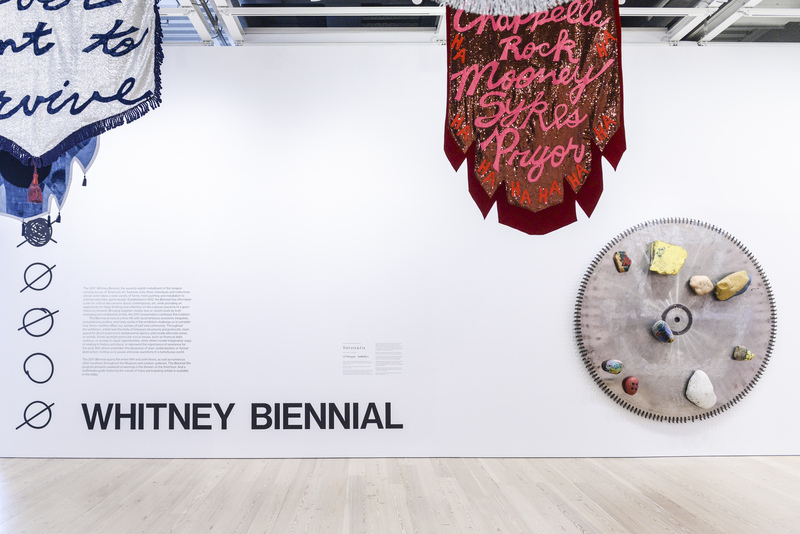 “Art is in a lost state now. It’s a mess, without any idea of why it exists, where it’s going, who it’s for, and where it comes from.” These claims are writ large in one of eight canvases by Frances Stark that line a central room of the 2017 Whitney Biennial, curated by Christopher Y. Lew and Mia Locks. It’s a passage from “Censorship Now!!,” a 2015 manifesto by indie rocker Ian F. Svenonius. Written with an incendiary zeal, a mix of Jonathan Swift and Valerie Solanas, the text builds a compelling case for the censorship of contemporary art, not by the state, but by the people. In doing so, the devilish proposal articulates bitter realities about the futility of culture today—about how art’s political potential is systemically and irredeemably commodified.

This is a damning statement to include in an iteration of the biennial that would appear to have finally achieved the show’s implicit political mission of representative inclusion and social engagement. Installed on two floors of the museum, the exhibition features sixty-three artists working in a spectrum of mediums: sculpture, photography, painting, video games, even botany. Lew and Locks have selected a thorough diversity of ages, genders, races, and regions, and consistently foregrounded vital issues like racial violence and income inequality. This all comes at a time when people desperately want to believe that the embattled domain of contemporary art remains a bastion for progressive freedom. 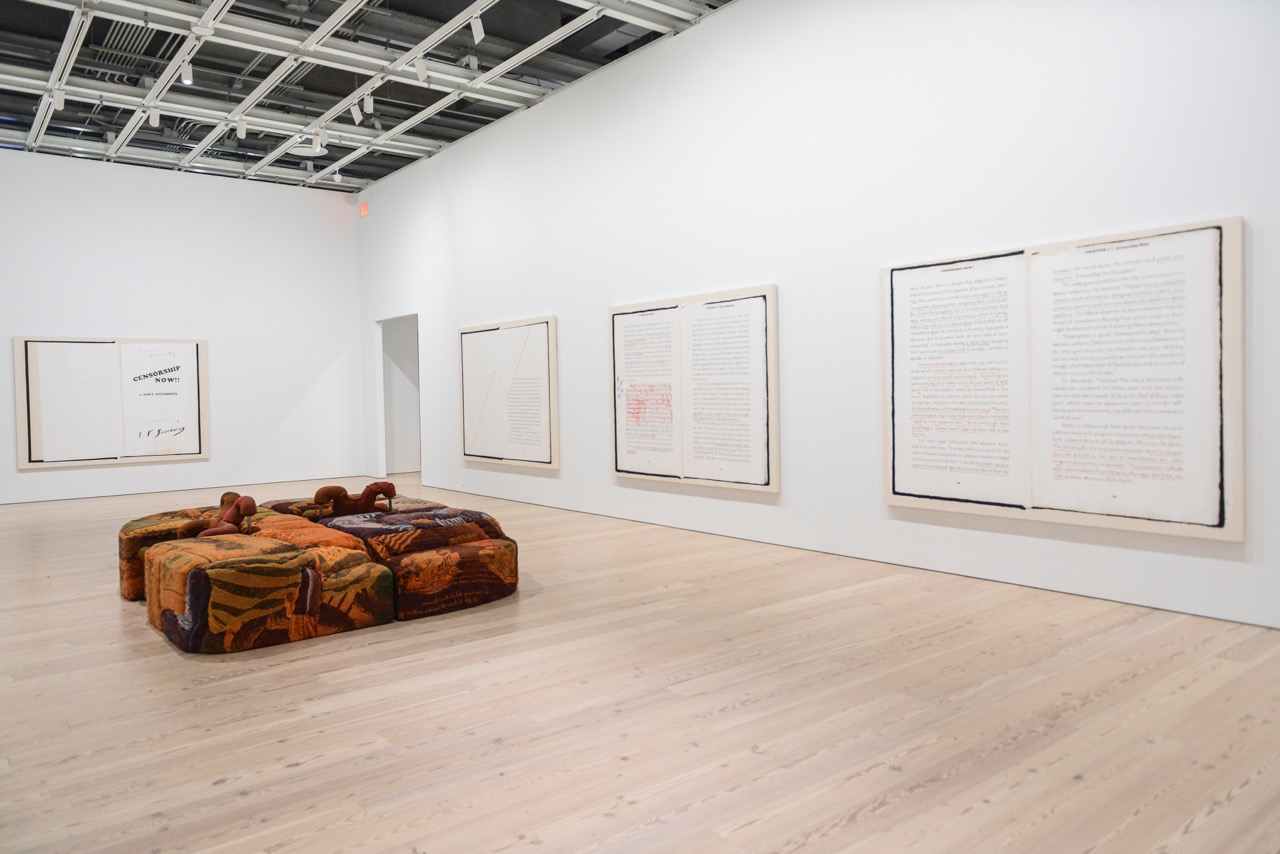 But, Stark’s work hits a nerve. Its source text begins with the word “We,” the W stretched out and gilded, refashioned as a decadent approximation of the Whitney’s logo. The artist makes a trenchant joke by choosing these big paintings—whose text is periodically underlined with impasto pink or gruesome, runny red paint that knowingly fetishizes her own hand—as her contribution to the loaded context of the Biennial. While the exhibition aspires to reaffirm the power of liberal democracy, it is supported by, and in turn supports, the economic forces that are tearing these ideals apart. It’s a tension underscored by the museum’s new home in the once-derelict Meatpacking district; as great as it is for showing art, the building is also a monument to gentrification.

If Stark’s work thrives on this conundrum, others that attempt critique are effectively neutralized. Cameron Rowland’s Public Money consists of framed documents pertaining to the Whitney’s purchase (at Rowland’s behest) of a $25,000 Social Impact Bond (a.k.a. “Pay for Success” contract) underwriting the reentry to society of prisoners released from jail in Ventura County. The SIA Bonds exemplify the privatization of social services, turning things once provided by the state into new investment opportunities. Rowland’s 2016 show at the comparatively scrappy nonprofit Artists Space, which pursued a related strategy of leveraging institutional resources to expose the mechanics of privatization, but on an expanded scale, was, in my opinion, the most important institutional show in New York by an emerging artist in years. However, unlike the multimedia display at Artists Space, the Whitney limited Rowland’s inclusion to conceptual documentation, which it shunted into an easily overlooked corner, situating him as a footnote instead of a focal point. 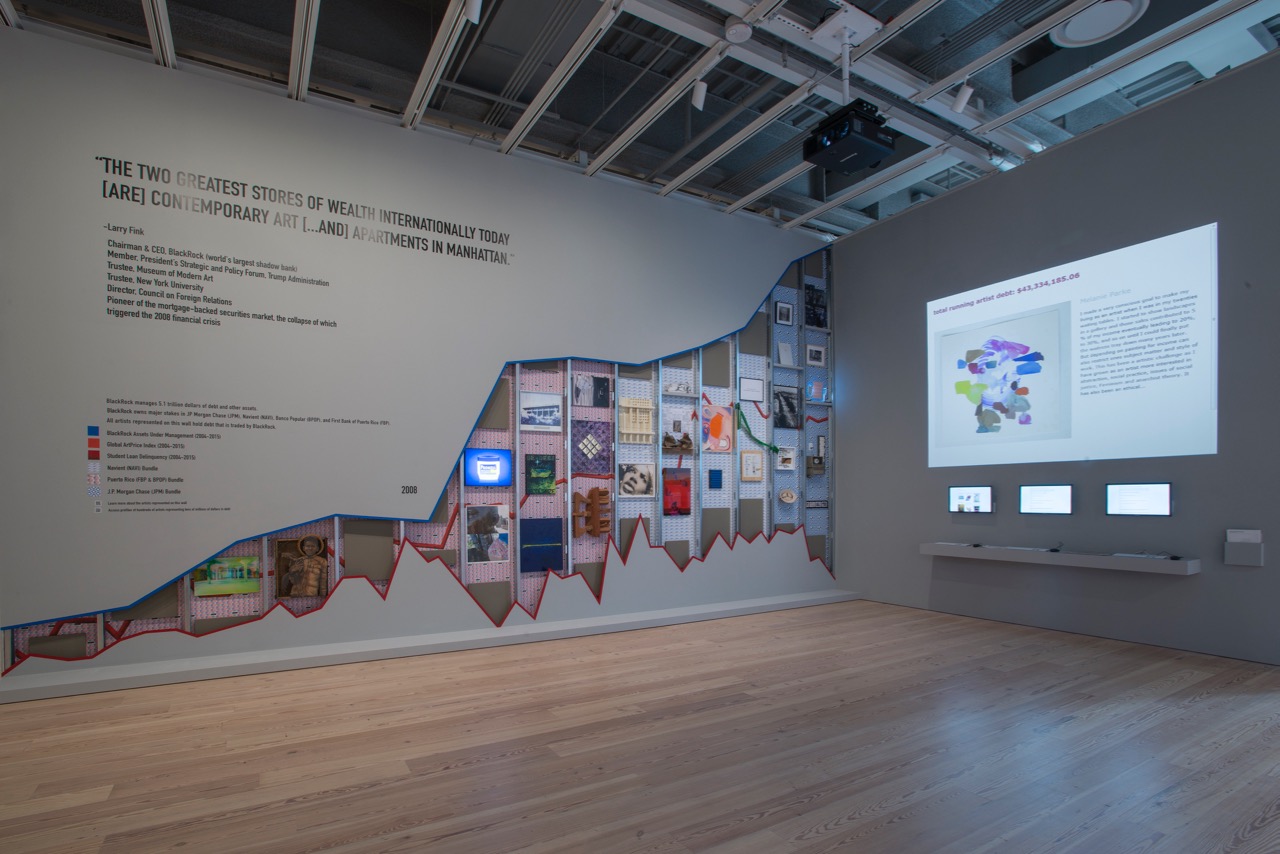 By contrast, Occupy Museums graces two large walls immediately off the elevators with a didactic presentation drawn from their most recent Debtfair survey. Its centerpiece is a bold, craggy graph evoking a corporate report, festooned with actual artworks made by practitioners who have indebtedness in common. The project shows how the museum participates in the debt industry by taking money from funders who profit from the debt of artists. Does this revelation open the Whitney to vulnerability or incite it to change? Doubtful.

In the case of less polemical works, it is even clearer that the political gestalt of the exhibition is polite. To choose one medium, the show is replete with well-selected painters exploring quixotic palettes (Shara Hughes), timely anthropological subjects (Celeste Dupuy-Spencer), and sly stylistic conflations (Julien Nguyen), but where do most of these works lead us from here? Positing them as the future of art seems like an escape into reverie—and into the foaming speculation of how the market will respond to their inclusion here.

The Whitney Biennial is famously a magnet for controversy, and whatever controversy may have been missing from the initial, approving critical reactions to the show came soon enough. Shortly after opening to the public, the 2017 Biennial has been mired in an ethical dispute that hinges on questions about censorship—uncannily presaged by Stark’s work—provoked by an open letter by artist Hannah Black calling for the removal and destruction of Dana Schutz’s painting Open Casket. Schutz, who is white, employs expressionistic brushstrokes to depict the disfigured face of black teenager Emmett Till, whose 1955 lynching was a pivotal precursor to the Civil Rights Movement. Specifically, she abstracts a photograph first published in Jet magazine that shows Till lying in an open casket, as chosen by his mother, his countenance mutilated beyond recognition. Black’s letter went viral, dominating social media and prompting discussions for and against it in virtually every art publication, plus news outlets ranging from The New York Times and The New Republic to TV networks like CNN and ABC. 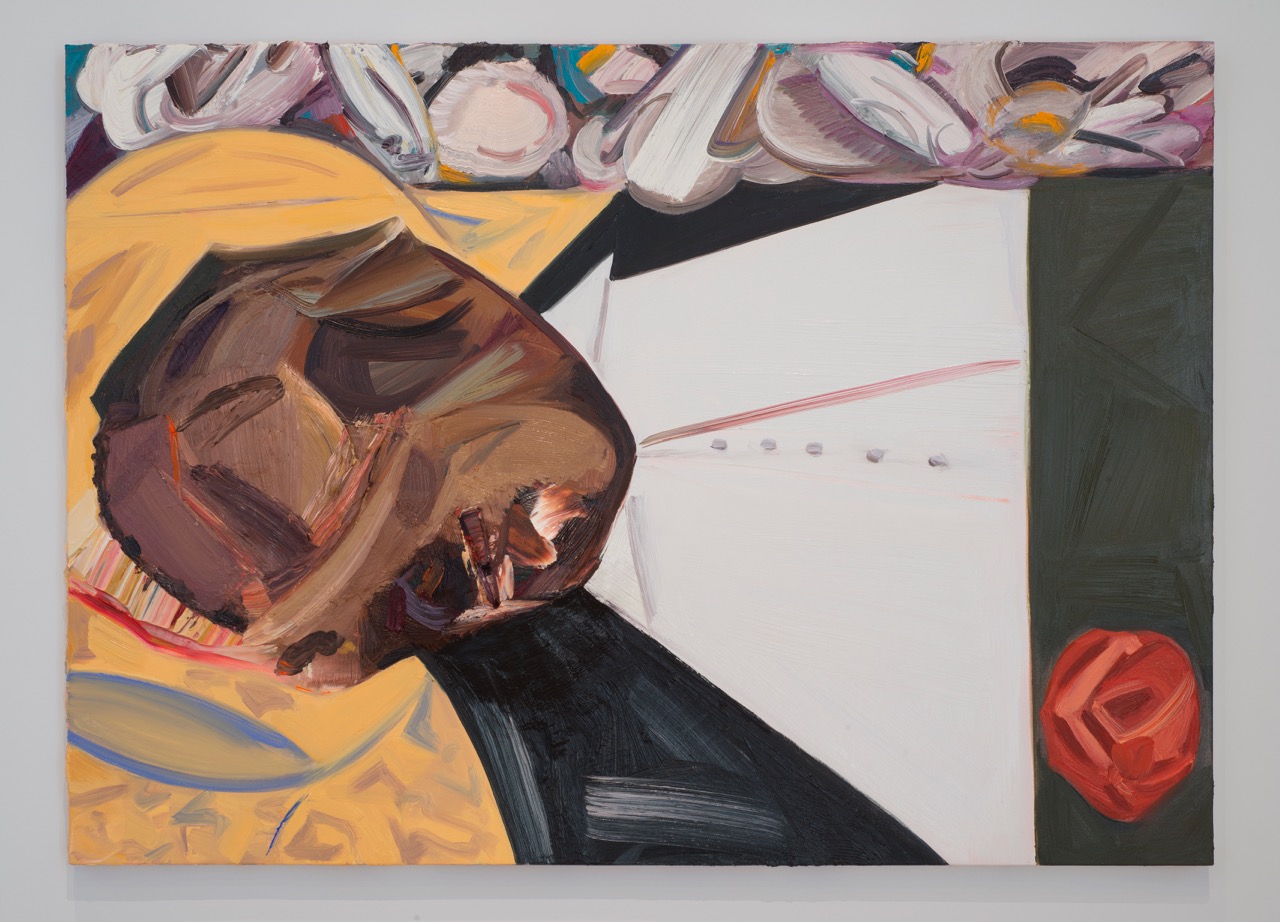 Till was murdered in Money, Mississippi, ironically, as money is the crux of Black’s argument. “It is not acceptable,” she states, “for a white person to transmute Black suffering into profit and fun . . .” When Whoopi Goldberg relayed this point to millions on the puffy morning show The View, her co-host Joy Behar scoffed, “Why is it fun and profit, though? She’s an artist!”—reflecting a mainstream sentiment that art exists outside the realm of commerce. On the contrary, anyone who works with art knows that nowadays it can hardly elude this domain.

At the start of the media storm, Schutz promised not to sell the work, thereby removing it from the market in a more amicable way than expunging it from existence. That said, the artist cannot disentangle herself from the broader commercial effects of the scandal, bad or good. In my estimation, Schutz’s legacy is posed to morph from high-producing art star to the protagonist of a false struggle between free speech and fascism. An artist or group of artists demanding censorship (if you want to call it that) of another artist’s work is altogether different from a regime doing the same thing. This distinction is essentially related to the one at the heart of Stark’s piece.

Schutz’s decision not to sell Open Casket indicates an admission that the empathy she meant to be conveyed through her painting is outweighed by the dynamics of capital, which are spiraling in a rapidly expanding American plutocracy. Artists today must do more than express who they are and what they stand for: they need to do so in ways that genuinely contend with the increasingly compromised contexts in which they work. Though it is a very high bar, this happens too rarely in the 2017 Whitney Biennial, which despite its historic inclusivity and the complex discourse its most high-profile curatorial glitch has produced, is too anodyne overall.