Literature
Writers Who Love Too Much

A new anthology looks back at the first generation of a transgressive avant-garde. 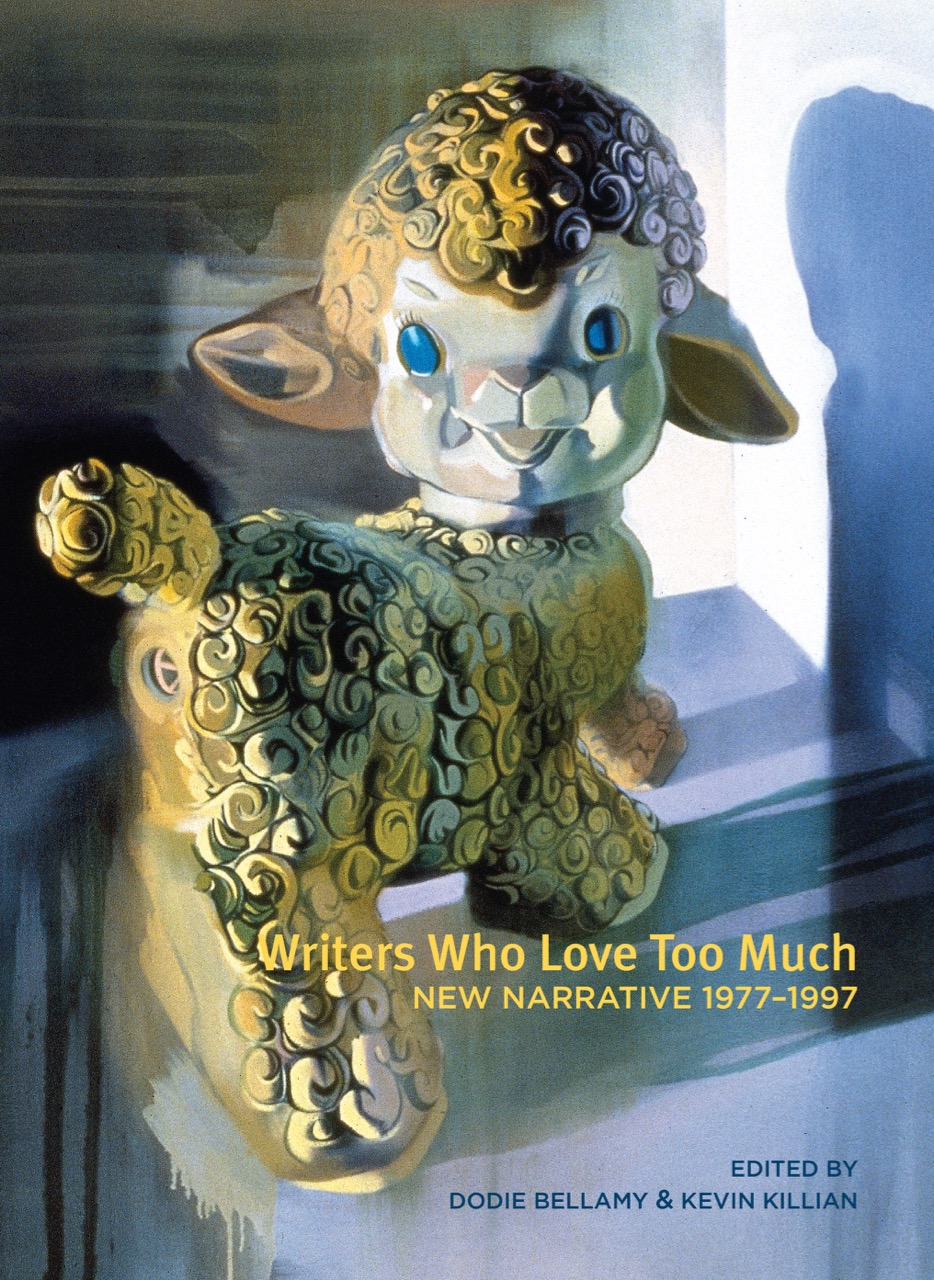 Was it Chris Kraus’s Aliens & Anorexia or Dodie Bellamy’s The Letters of Mina Harker? Maybe Great Expectations by Kathy Acker. I can’t say for sure which was my first encounter with New Narrative, but I remember the thrum of exhilaration I got from it. I was twenty-five, studying fiction at Temple. Acker, Kraus, Bellamy—and later discoveries like Laurie Weeks, Kevin Killian, Lynne Tillman: whatever I thought I knew about writing, these writers challenged all of it. I didn’t quite grasp exactly what I’d read—fiction? memoir? theory?—but I came away reeling and raving, and itching to write.

In their new anthology, Writers Who Love Too Much: New Narrative 1977–1997, editors Bellamy and Killian gather what they consider the first generation of New Narrative writing—though in keeping with the movement’s suspicion of linear, coherent narratives, they are quick to shrug at this marker. Formed in the late 1970s in San Francisco, New Narrative was a transgressive, queer-leaning, self- and body-obsessed literary avant-garde that took shape in part against the dominance of anti-narrative, self-evacuating Language poetry at the time. Combining the confessional with the conceptual, it experimented with the possibilities of loosely autobiographical storytelling to produce an exploded and unstable “I.” Gossipy and uninhibited, its breath is hot in your ear. It wants to tell you everything, and it wants you to overshare back.

Bellamy and Killian’s project is first and foremost a historicizing one. Writers Who Love Too Much charts a literary history that grew out of punk, second-wave feminism, and the gay rights movement and covers the Reagan era and the HIV/AIDS crisis to close just about where the Internet and Semiotext(e)’s Native Agents book series take over. The anthology compiles generous selections, many of them excerpts, from more than forty writers, as well as talks, interviews, and other valuable, otherwise out-of-print ephemera from the period. The book has been built with deep feeling, and the title is right: including the thick appendix of chatty notes, we’ve got a haul of five-hundred-plus pages, a hefty chunk of which are given over to the urgent tug of infatuation of every conceivable stripe. Kathe Burkhart declares, “I love you. I’ll obsessively worship you as long as you’ll let me”; Dennis Cooper reflects, “I loved him. I should have said so less often.” The final selection, an excerpt from Kraus’s abject, swooning I Love Dick, culminates the movement’s central concern with the ways in which desire reconfigures and amplifies the self.

With its exposed asshole and eager grin, the toy lamb on the book’s cover gaily describes the New Narrative aesthetic. Dodie Bellamy’s own “Dear Gail”—effusively citational, frankly sexual, and slyly confessional—is a case in point. This excerpt from her epistolary Letters of Mina Harker perhaps best represents that slippery New Narrative “I.” The novel’s premise is that Bellamy has been possessed by Dracula’s victim-turned-vampire Mina Harker and is writing to Bellamy’s friends about the affairs she is having. “Quincey stuck his thing in my hole and gossip trembled along the telephone lines . . . ,” Mina starts. “Is this what it means to live in a writing community?” Then she launches a zigzagging tour through her sexual encounters, dreams, and reflections underpinned by passages lifted from other writers such as Georges Bataille, David Wojnarowicz, and Sylvia Plath.

Bellamy’s Mina is a catty, often merciless narrator, her observations about her/Dodie’s life bubbling over with mirth. This campy playfulness is shared by other selections, especially those adopting a more avant-pop mode, such as Matias Viegener’s “Twilight of the Gods.” Originally published in 1990, the story proposes a love triangle developing between Rock Hudson, Roy Cohn, and Michel Foucault as they receive experimental AIDS treatment at the American Hospital in Paris: “Each of them knew he was dying, and it was time for them to settle their scores with each other. They had to answer the Big Questions.” While this outlandish scenario brings a nervous levity to a crisis that casts a long shadow over the anthology, the philosophical exchanges imagined between these three very different public figures are as meaningful as they are absurd, and Viegener ultimately grants the lovers a “blissful” last few weeks.

It’s true this school of writing was made up of mostly white writers, at least this first generation. One of several notable exceptions is R. Zamora Linmark, whose raucous excerpt from the (recently reissued) novel Rolling the R’s uses avant-pop strategies to construct a 1970s-era Hawaiian world populated by mostly queer, mostly poor, mostly immigrant kids channeling fantasies of American whiteness through the figure of Farrah Fawcett. The next wave of New Narrativists would bring more diversity, with writers like Pamela Lu and Renee Gladman joining its ranks, among others. (A New Narrative Now conference in the works is likely to address the movement’s relationship to race and identity and other minoritarian avant-gardes.)

The editors describe the anthology as a “definitive sampling.” While it can be frustrating to encounter so many excerpts not meant to stand alone, these selections achieve a vibrant coherence. Gathered together, they accumulate a heady velocity, the sense of roving, unstoppable minds bending narrative through an unfailingly complex prism of the self. Given the recent turn toward autofiction and new experiments in memoir, it’s clear this movement has ongoing relevance. What has made it so influential, I’d argue, is not a flavor or style, but an energy that redirects interiority into a potently outward-looking charge. Put another way, New Narrative is not only a citational mode, but an inciting one; and Writers Who Love Too Much should incite an abundance of writing to come.