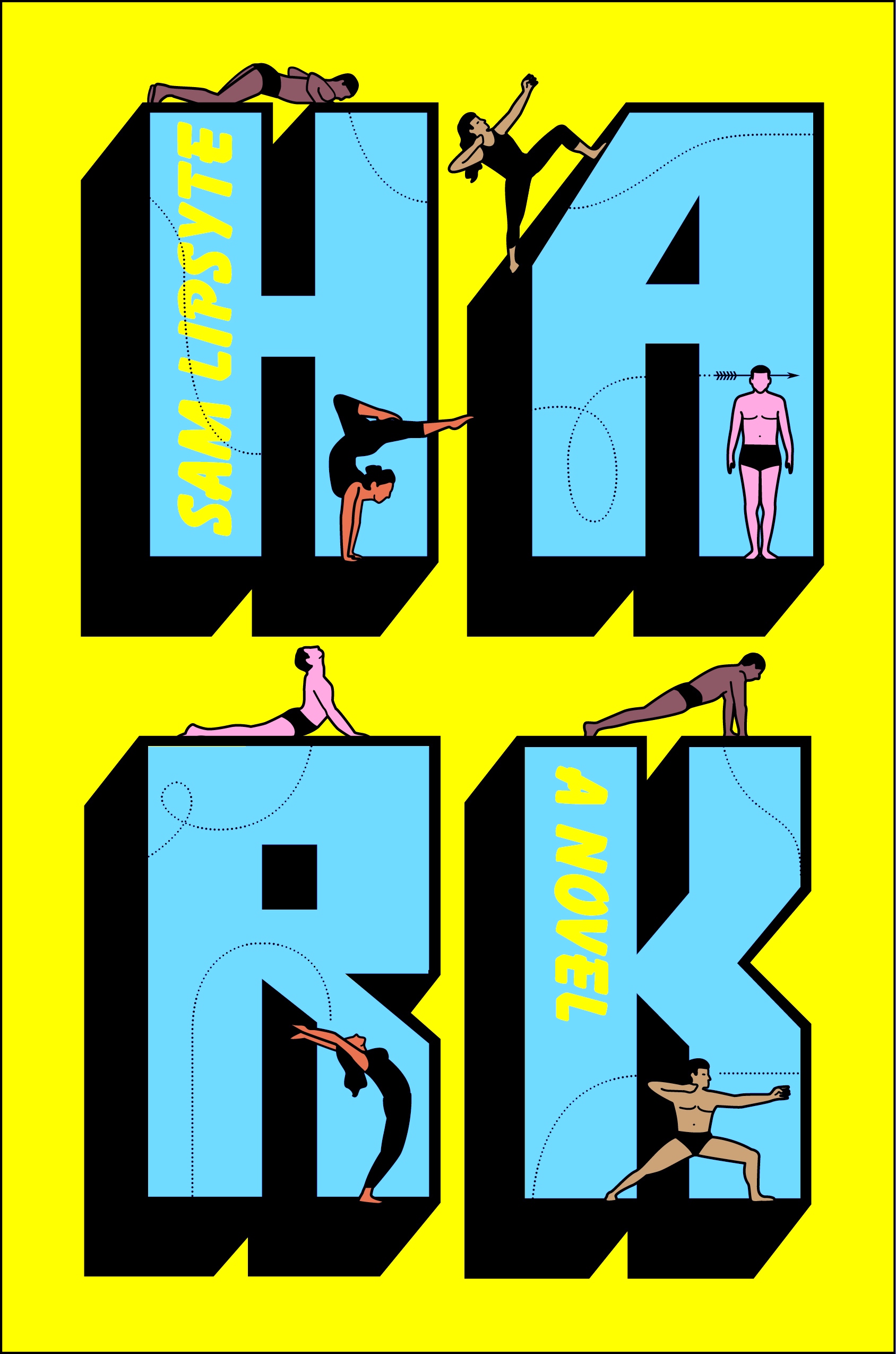 I’ve heard that the audience at Sam Lipsyte’s readings silently mouths along to every word. That may be an exaggeration, but it reminds me of my first and only Rush concert, circa 1994, where I saw forty thousand fans air-drumming to Neil Peart’s polyrhythms. With Lipsyte, we’re talking that level of virtuosity. Any riff from his new novel, Hark, will give you a sense of his style:

“Rich kids with deformities fascinate Fraz. Their blights are an extra injustice, a cosmic prank. Will this lad with the congenital mishap ever get to rev a custom-built Ducati, or grip the till of a teak-decked daysailer? Will he be welcomed by handsome and ravishing peers, invited to caress fellow trust fund vaginas and penises with his raw, scaly permafist?”

Everyone sounds like this: the narrator, the main characters, the kids, even a prehistoric catfish who murmurs to the titular protagonist in his dreams. If you’d rather follow a tight-knit plot than luxuriate in conspicuously deluxe prose, Hark may not be for you. (This is the case dating back to his first story collection, 2000’s Venus Drive. In his four books of fiction since, the sentences are the thing. They can go anywhere and be anything, except boring.) That’s not to say there’s no story in Hark, but it’s loose—a series of wild set pieces. The book follows the rise and fall of Hark Morner, a self-help hero who peddles a personal betterment system called “mental archery.” It’s target practice without the bow and arrow, Light on Yoga meets The Art of War. Would-be archers strike poses like “Rainforest Hunt” or “Arc of Totality,” and listen to online lectures stocked with fictional-history battle wisdom: “How did a Korean warrior begin his archery training? He’d stand in a field with the bow on the ground before him and meditate upon its contours for months.”

Like Lipsyte’s last novel, 2010’s The Ask, Hark is about success and a schlub who suffers an anxious lack of it. Here, the lovable loser is Fraz Penzig, a familiar Lipsyte type: middle-aged, self-thwarting, worried, privileged, under-committed, overlooked. He’s got a body with “a certain overspreading doughiness.” He’s bad at his job (tutoring), his marriage (to Tovah, a lapsed poet), and parenting (he’s got two precocious jerk kids, David and Lisa). When Fraz sees Hark teaching mental archery at a bookstore, he quite suddenly feels much better. Inspired, he becomes one of Hark’s earliest apostles.

And who is this guru with the “fierce green, tender gold” eyes? Hark doesn’t exactly seem like messiah material. He’s a former stand-up without a sense of humor. He’s cagey, which can come across as profound and inscrutable (good), but he’s also spooked by the aforementioned catfish nightmares (which seems bad). Like Chauncey Gardiner in Being There, Hark stumbled into his calling. Mental archery started during his unfunny comedy days. Noting how off-putting he could be onstage, a corporate booker hired him to deliver intentionally bad seminars on working more efficiently. This was a morale-boosting scam: when the employees got angry, the boss would play the hero by dramatically kicking Hark out of the office. But the con turned real when Hark began to believe his own odd riffs. Before long, he alighted on certain themes—William Tell, boy, apple, archery—and a movement was born: “It wasn’t that Hark had the answer. It was more that he didn’t. All he possessed, he claimed, were a few tricks, or tips, to help people focus.”

That word, focus, suggests many cures, and Hark never complicates the task with specifics. In one video, he instructs, “You are the arrow, and the trees the arrow speeds past, and the past the arrow speeds toward. Focus on focus on focus.” A familiar-feeling nexus of self-improvement and self-loathing, mental archery provides a passable answer to a pressing question: What will make this unbearable world more bearable? For Hark’s devout, drawing an invisible bow usually does. Why? Well, Fraz would probably say, why not mental archery?

A more articulate answer comes when Lipsyte explains how two other devotees, Kate and Teal, fell into Harkism: “It was a joke between them, until it wasn’t funny. When it was no longer funny, it became profound.” Lipsyte loves to work in that tight space in which comedy has worn out and the profound starts to show. Irony becomes sincerity that doubles back, eating its own tail. It’s a style that only works with prose of the highest caliber—fluid and alert, deeply moral, unafraid to be lyrical or detour into the rudest humor. The satire is 10Xed, vicious and humane because the author’s self-recognition is clear. In Hark, little shards of phrase gleam with goofy malice, as Lipsyte perfectly embodies an exasperated Gen Xer enduring these ridiculous, teeth-gritting times: Tovah’s coworker wears “cardio surveillance wristwatches”; the kids accuse Fraz of “hurt speech”; a strip club is a “post-cis neo-vaudeville burlesque.”

But the author saves his hottest roasting for the opportunists who seize on Hark’s hapless charisma. When mental archery is besieged by moneyed interests, like the businessman-braggart Nat “Gnat” Dersh and a social-media czar named Dieter “Deets” Delgado, you can almost hear Lipsyte cracking his knuckles, preparing a knockout punch in every paragraph. Deets has big plans for “focus”:

“Hark, you bring something else to the party. A winning strategy. We’ve lost that over the years. I’m quasi-Buddhist myself, but the problem with life from that perspective is you can’t win it. Not in a palpable, convincing way. What I’m trying to say is that to flourish you must believe that life can be won. That there’s a trophy out there. And not just the symbolic trophy for achieving freedom from suffering or peace of mind.”

Part of Lipsyte’s point is that anything remotely holy, even a janky system of fifty-two archery formations, will be misinterpreted, manipulated, and, of course, monetized, while also, paradoxically, providing real solace. Perhaps this is truer when the world’s a mess, or maybe people are always ready to be transcendently conned. Either way, nothing masks bad intentions like do-gooding, especially in the tech world. Take Mercystream, one of Deets’s other ventures, an initiative straight out of the Mark Zuckerberg playbook: “Instead of letting refugees into the country, we can give them laptops and listen to their stories as they stream them from their camps.”

“Evangelical entrepreneurs, representatives from the Vatican’s social media wing, internet imams, public atheists and assorted bandwidth hustlers have all gathered to reflect on the various streams of contemporary life—spiritual, ethical, cultural, technological—before robots seize the planet for good, though it’s clear most guests have just come for the all-night dance party.”

That last clause is a tell. Lipsyte isn’t just bitching. Hark’s sendup of human greed, stupidity, and pathetic pre-apocalyptic longing delivers real empathy in an era of fake concern. (It’s hard to truly hate anyone, even an evangelical entrepreneur, when you know they’re just a sad sack looking forward to a corporate dance party.) Flashes of this regard dot Lipsyte’s riotous novel like stars, bright and isolated. It’s not like compassion can save us. But it is something to focus on.