Film
A Tale of Springtime 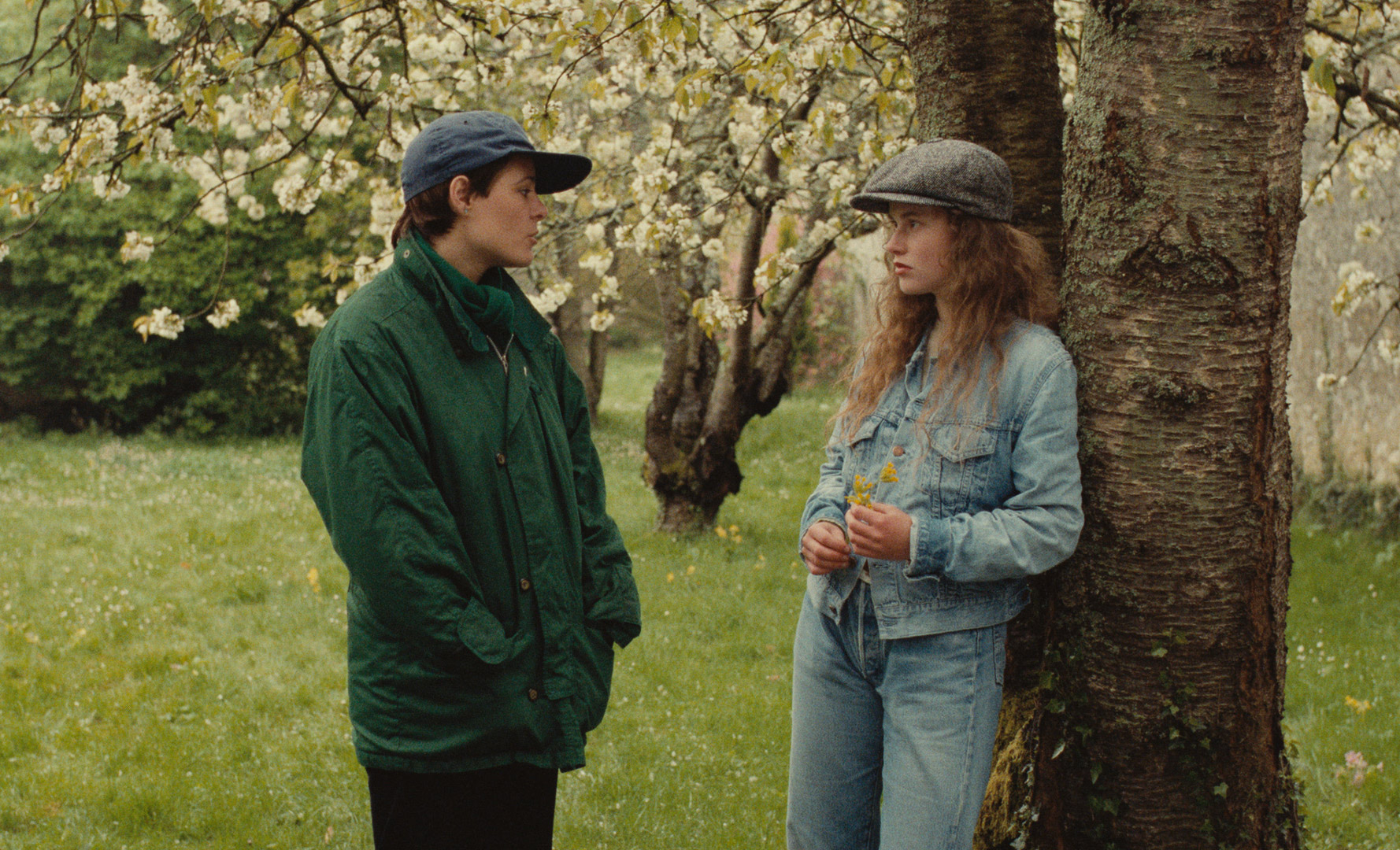 Anne Teyssèdre as Jeanne and Florence Darel as Natacha in A Tale of Springtime. Courtesy Janus Films.

A Tale of Springtime, written and directed by Éric Rohmer, available at Film Forum’s virtual cinema

A Tale of Springtime (1990), the inaugural entry in Éric Rohmer’s “Tales of the Four Seasons” cycle (a quartet of movies that will stream via Film Forum’s virtual cinema this April), opens with a brief study in displacement. We first see Jeanne (Anne Teyssèdre) exiting the Lycée Jacques Brel, spotlit amid the students by her blazer, pumps, and belted chinos. Jeanne drives through a suburb and across the Seine into central Paris, where she enters an apartment strewn with tangled bedsheets, men’s shirts, and the crumbs of a half-eaten baguette. Soon abandoning her reflexive tidying to pack a duffel bag with some clothes and two volumes of philosophy (Plato and Kant), she then drives to a second apartment. Here she finds things in better order, save for the strange young man (Marc Lelou) in his underpants. Is this place her home, and not the other? It is and it isn’t, we learn, as her cousin and houseguest Gaëlle (Sophie Robin) appears and asks if she and her boyfriend can stay a few more days. Jeanne says no problem, claims she was only stopping by to switch out some clothes; it’s spring, she adds. The ease with which Jeanne adopts the pretense of just passing through invites the viewer’s admiration—how gracious—as well as her scrutiny. Is this deception in the name of courtesy, or vice versa? Where does this woman actually live? How to measure the gap between what Jeanne says and what she really wants?

We next see Jeanne in yet another apartment, striking the afflicted pose of the peripheral party guest. Seated on a couch apart from the action, she is joined by Natacha (Florence Darel), an eighteen-year-old conservatory student who has just been stranded there by her much older boyfriend. Talk of when and how to escape the party turns to that of their respective living situations: Jeanne’s boyfriend, Mathieu, is away, and she can’t bear to stay in his apartment alone; Natacha now has her childhood home to herself, her divorced father Igor (Hugues Quester) having effectively moved in with his twenty-year-old girlfriend, Ève (Eloïse Bennett). 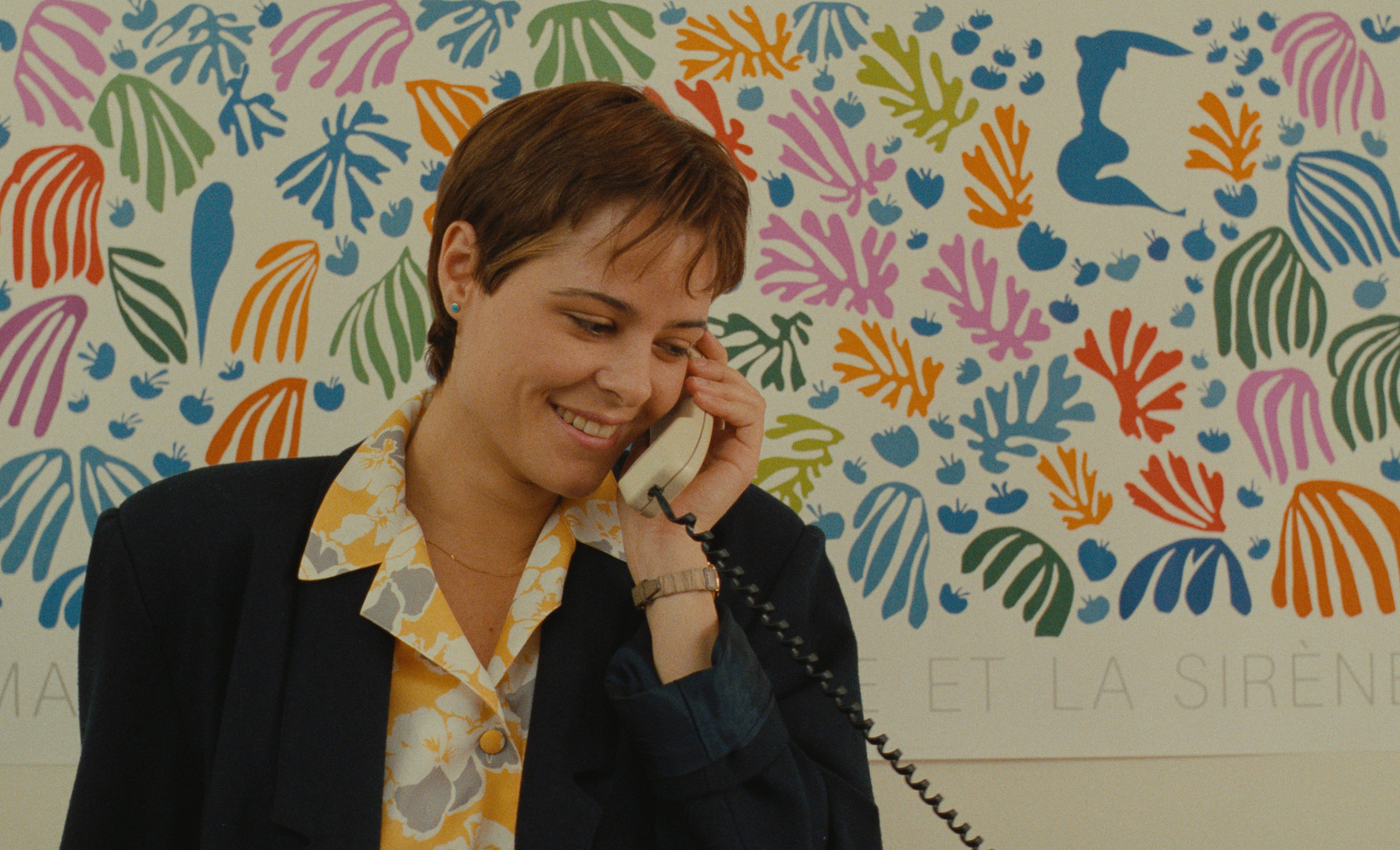 Anne Teyssèdre as Jeanne in A Tale of Springtime. Courtesy Janus Films.

Bound by their navigation of different transitional phases, the pair’s contrasting presentation suggests a larger shift in progress. In her shoulder pads, frosted lipstick, and Mary Lou Retton crop, Jeanne, a philosophy teacher in her late twenties, still cuts an ’80s silhouette. Wearing crushed velvet bodysuits and ultra-high-waisted everything, at the turn of the decade Natacha already has both feet in the ’90s. Yet the distance between them adjusts only slightly their engagement with the questions that bedevil so many Rohmer characters: how to form a coherent account of one’s own desires and act in accordance with them, how to marry notions of selfhood with one’s actual self, how to take possession of what one already has. Jeanne accepts Natacha’s invitation to spend the night at her apartment, a gently dilapidated space with original moldings where the host complains about her mother and Ève, laments her father’s failed literary ambitions, plays from Robert Schumann’s Songs of Dawn on the piano, and exhibits a little girl’s glee in showing Jeanne her bedroom. 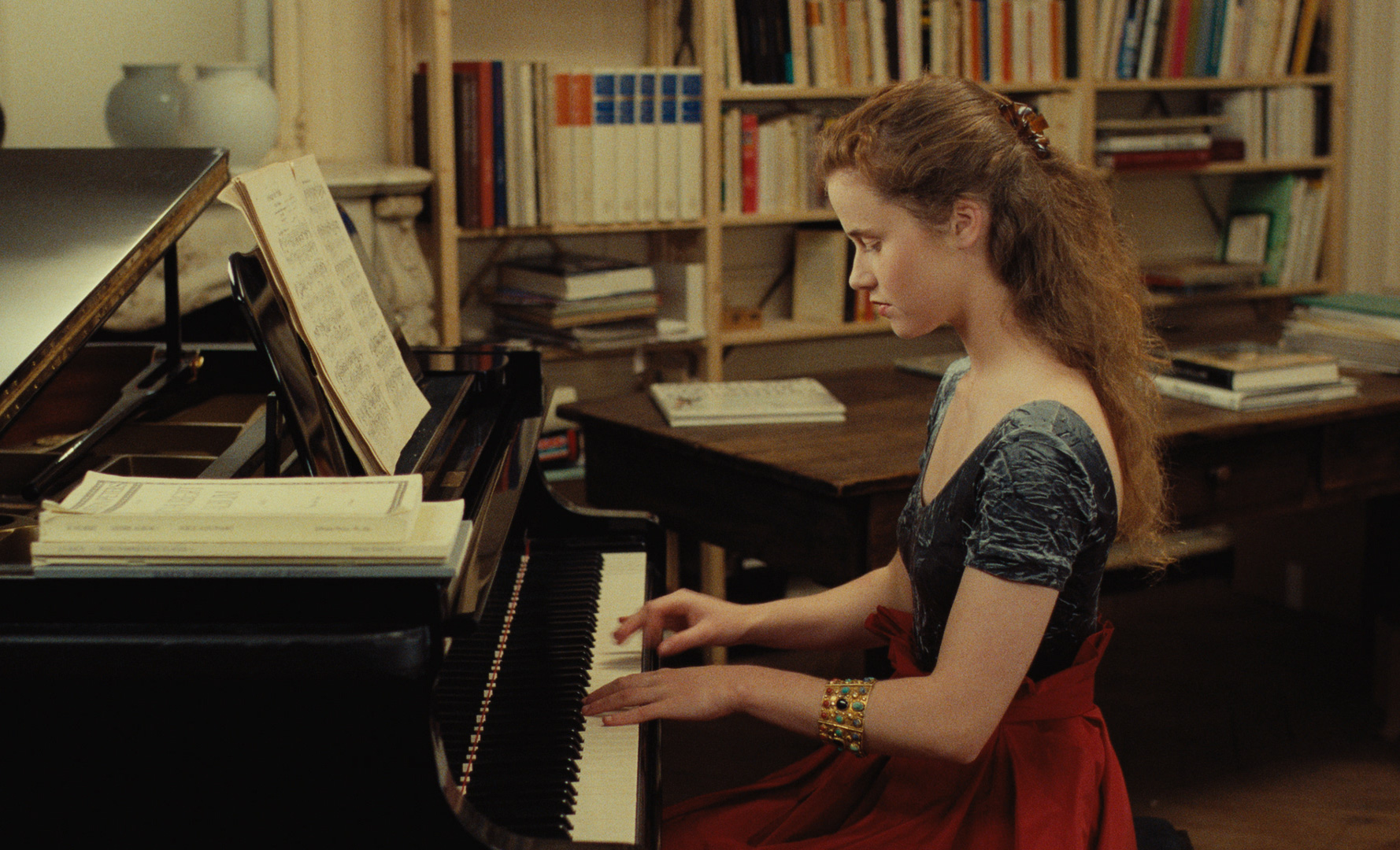 Florence Darel as Natacha in A Tale of Springtime. Courtesy Janus Films.

By turns tentative and expansive, the connection between Jeanne and Natacha forms the seabed over which the film’s various moods, schemes, and ideas flow. Each sees an opportunity in the other—Jeanne the remedy for her self-imposed exile, and Natacha a more suitable girlfriend for her father. When Natacha contrives a series of encounters between Jeanne and Igor—a mild, diffident civil servant—Jeanne is willing to see what happens. Despite abhorring Mathieu’s personal disorder, Jeanne blames their relationship’s current malaise on the untenable gap between acting married and actually being married. When Natacha expresses surprise at Jeanne’s plan to wed a man she has just called “utterly despicable,” Jeanne shrugs in the way of someone who has accepted compromise and practicality as the true songs of adult life. Enough doubt lingers, however, for her to dabble in Rohmerian economics—whereby ordinary, extremely verbose individuals negotiate interwoven hierarchies of romantic love and personal freedom, conscious to the point of paralysis of getting the best deal, making the optimal choice, holding out for whatever the real thing might be. 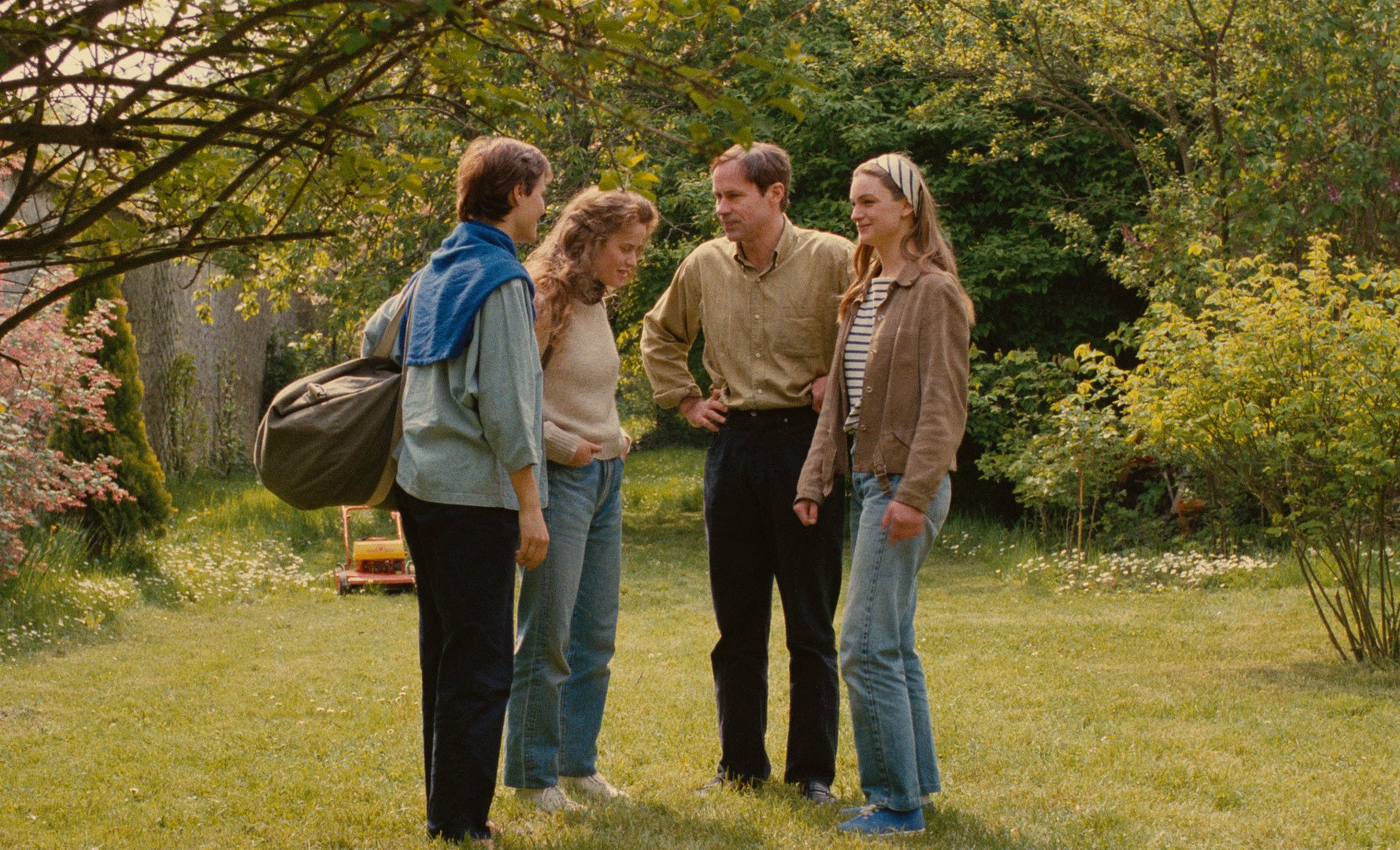 Anne Teyssèdre as Jeanne, Florence Darel as Natacha, Hugues Quester as Igor, and Eloïse Bennett as Ève in A Tale of Springtime. Courtesy Janus Films.

Though numerous scenes play out in the pastoral setting of Natacha and Igor’s country house—where petulant, dad-obsessed Natacha clashes with smug, hair-swishing Ève, and Jeanne and Igor talk circles around whether to bone—the film’s aesthetic is one of private interiors, the spaces that serve as vessels for our lives, if not for time itself. Back and forth these characters go, packing and unpacking their bags. Here as in each entry in the four-seasons series, Rohmer extracts from what amounts to chronic human dithering a story of transience and possibility. Long takes and simple, picture-book compositions foreground a talky script whose chatter serves—as chatter so often does—mainly as a distraction.

At stake is the shifting relationship between character and behavior, essence and expression, what is constant and what remains subject to constant change. Least reliable when they describe themselves, which they do frequently and at length, Rohmer’s characters make self-awareness look a lot like self-delusion. They are also capable of bruising frankness: the sex is good because we know it won’t last; I’m just playing this out until something better comes along. About love they are at once pragmatists and true believers, trusting in chance but filling the interim with cold assessment. Whatever triumph romantic attachment affords such restless creatures has less to do with personal (much less erotic) fulfillment than the hope of fixing one’s self in time; of easing, even for a little while, its relentless passage. 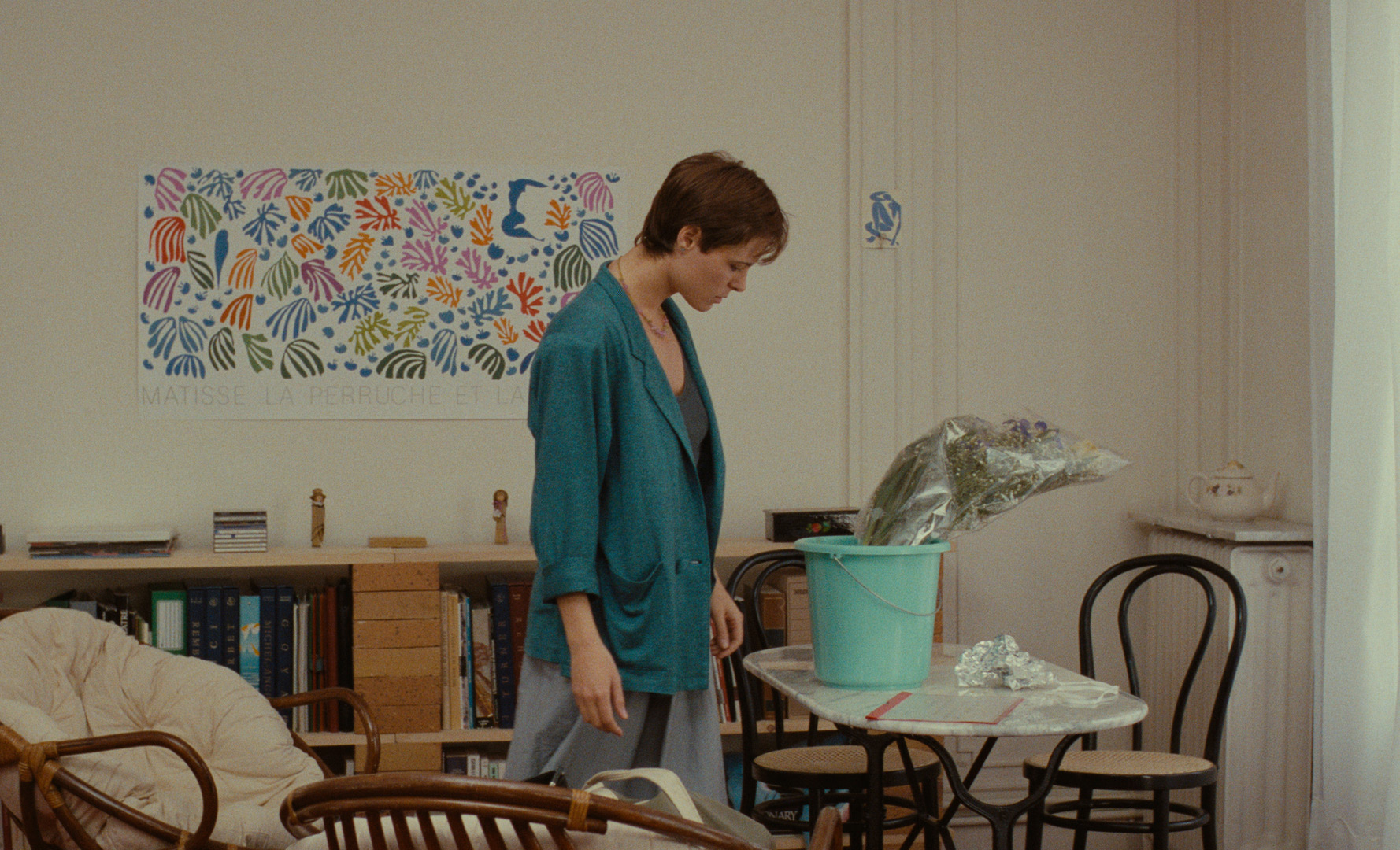 Anne Teyssèdre as Jeanne in A Tale of Springtime. Courtesy Janus Films.

Throughout A Tale of Springtime Jeanne calls herself fussy, clumsy; “fanatical about other people’s freedom”; someone who “thinks about her thoughts, maybe too much”; not mad and therefore not capable of loving madly. Others note her calm: physically her solid presence cuts against Natacha’s flouncing and Igor’s noodley unease. Teyssèdre emits a subtle magnetism, her face a flickering mask, her vibe a sort of ardent detachment. Viewed at a distance, Jeanne’s moral essence is clear, yet in the film’s reality she remains inscrutable. It is this gap that interests Rohmer, and that viewers are invited to consider, to push past their judgment toward something closer to recognition. A source of folly at times, the gap also lets the light in. The film’s effect is sneaky, cumulative, much like that of years gone past. Springtime ends on a note of resignation and sweetness, its final moments evincing the relief of possibility’s closure: the solace of having chosen, freely and in good faith, before it’s too late.