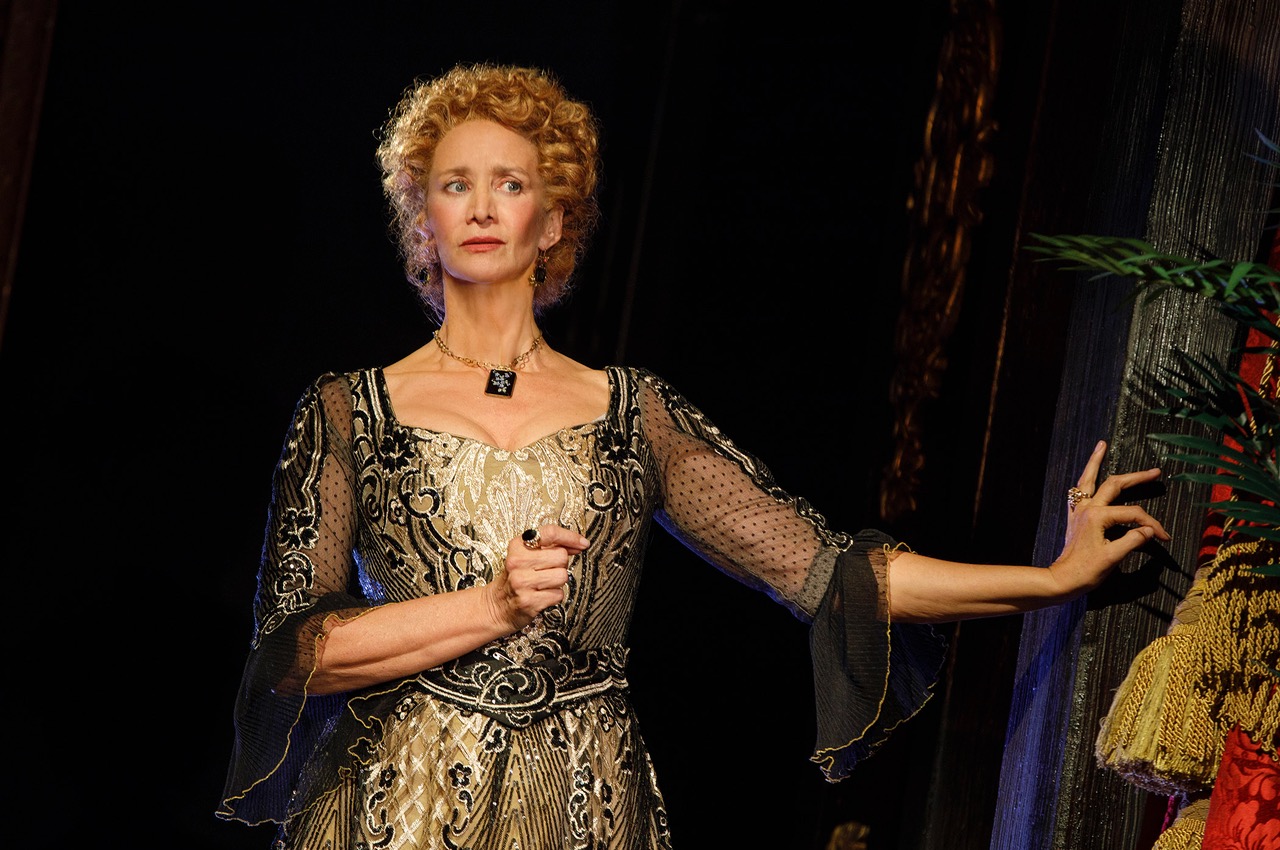 When she was fifty-five, Sarah Bernhardt played Hamlet. It was 1899, and the glamorous actress was the first French woman to ever take on the part, donning a velvet tunic and black tights and causing all sorts of uproar. A grandmother as Shakespeare’s melancholy prince! And showing her legs! Titillated audiences—French, then British, then American—poured in. Artistically, it was either a success or it wasn’t: responses were divided between excitement at her quality of virile action and a kind of shocked, often misogynist, dismay.

Bernhardt was then galactically famous. Her long career set the pattern for our celebrity-obsessed culture—the way we tangle together newspaper gossip and art-worship and box-office receipts started with her. When it comes to brave, public, self-determined womanhood, Bernhardt struck the mold. So there’s some excitement when one of our most outspoken feminist playwrights, Theresa Rebeck—versed in both working women (the play What We’re Up Against) and the mechanics of theatrical fame (the television show Smash)—writes a Broadway play about her. What can she do with this lioness, particularly if she’s played by the great British actress Janet McTeer? There’s no question that the actor is right, that the moment is right, that the subject is hot iron. But then Rebeck brings down her hammer in the wrong place, and whacks her own play in the foot. 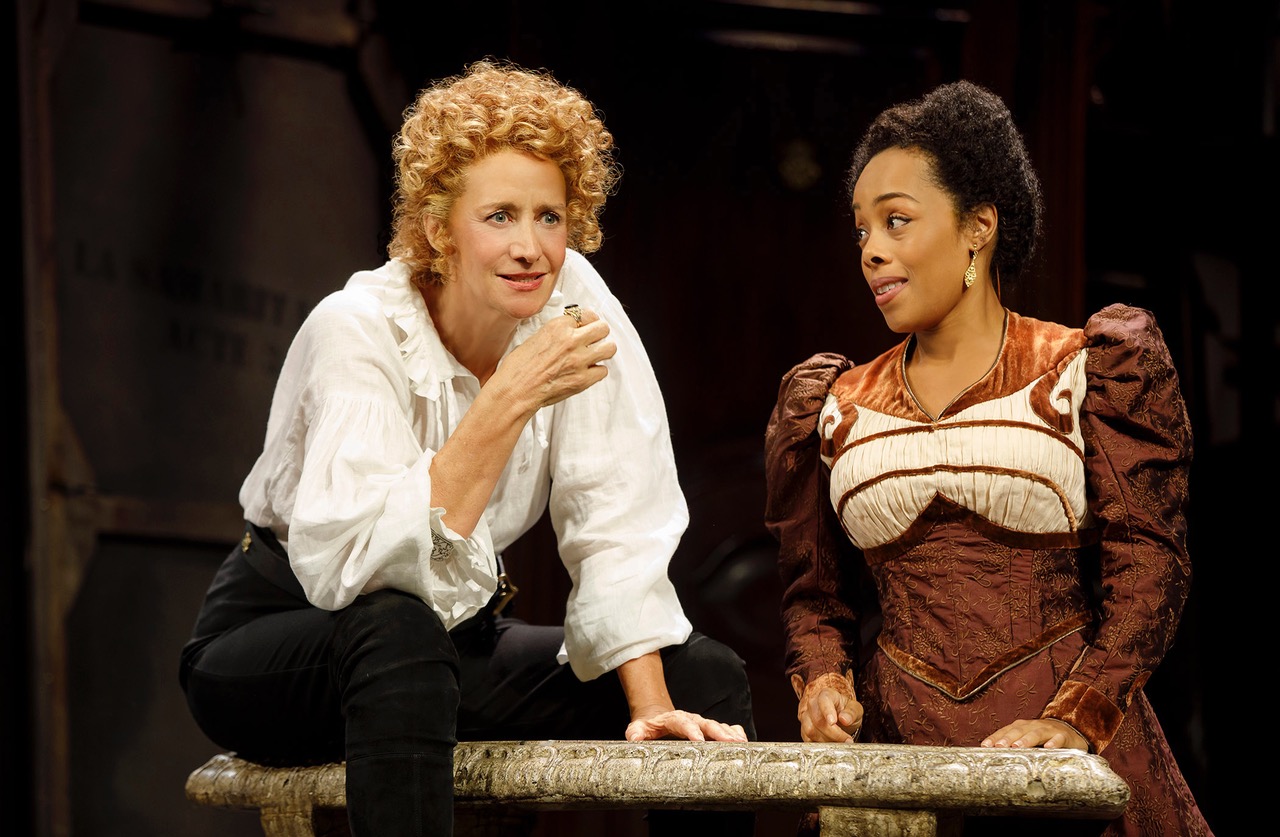 Bernhardt/Hamlet is set early in the developmental phase of that long-ago production: Sarah is in rehearsals and calling for lines, frustrated by the text. She’s still figuring out staging with her Ophelia, Lysette (Brittany Bradford), her Rosencrantz and Guildenstern (Triney Sandoval and Aaron Costa Ganis), and her dear friend Constant (Dylan Baker), playing Hamlet’s father’s ghost. These backstage comedy bits are alternately adorable and powerful, full of the casual magic of actors mid-discovery. In a striking scene, McTeer and Baker run through the appearance of the Ghost on the battlements and find a deep pathos together, huddled downstage on a pair of stools, bringing tears to each other’s eyes. As long as Rebeck leaves us here, watching McTeer swagger about in tall boots as she knocks Shakespeare scenes into the bleachers, the night is heaven. 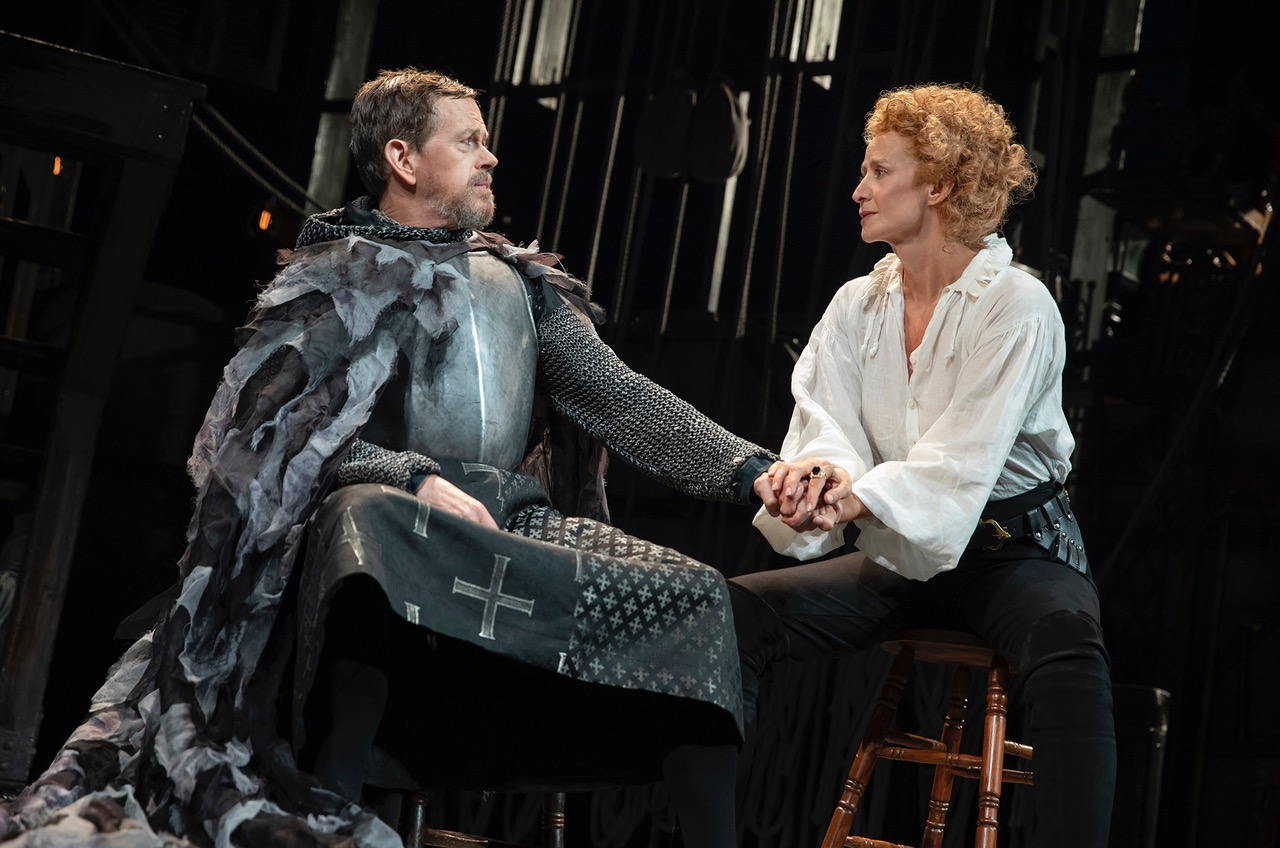 But we can’t just sit around enjoying the Hamlet-within-the-play; we’ve got a middling comedy to attend to. Bernhardt’s married lover Edmond Rostand (Jason Butler Harner) bursts in; he adores Sarah but hates her plan to play the Prince. She throws him and her other doubters (a lemon-faced critic and her poster designer, the art nouveau illustrator Alphonse Mucha) for another loop when she says she loathes Shakespeare’s da-dum, da-dum iambics—and that she needs Rostand to “rewrite Hamlet.” This command brings down the first-act curtain, an honor playwrights reserve for something so shocking and delicious that the audience can’t help but rush back from intermission. But in Rebeck’s drama, this line flops down with a whump of collapsing fabric, buckling from a fatal lack of consequence, incident, or urgency. 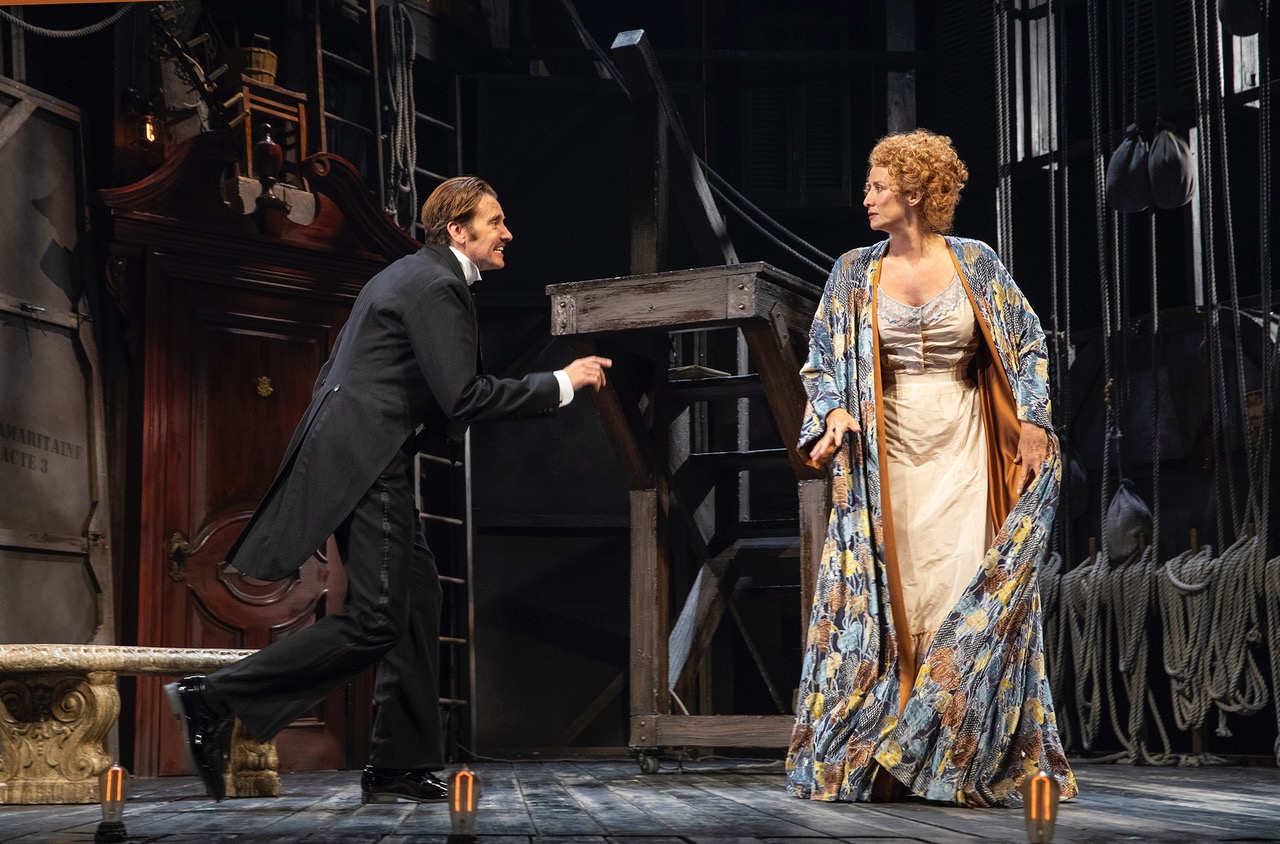 The idea that Sarah Bernhardt, out of all actors on Earth, would balk at Shakespearian meter is . . . perverse. Bernhardt was of the old declamatory school, a onetime member of the Comédie-Française and thus a past master of alexandrine couplets. And anyway, why would she worry about iambic pentameter? Any translation would necessarily be into (the notoriously unstressed) French. As for all the fuss about mutilating the great Shakespeare? Piffle. The nineteenth century was positively knee-deep in actor-managers cutting Shakespeare to suit.

But, you’ll say, playwrights have a license for anything. Rebeck—as she has—can ditch everything we know of Bernhardt (“queen of the pose and the princess of the gesture”—the real Rostand) and have her switch to the acting style (intimate, based in personal memory, truthful) that really belonged to her great rival Eleonora Duse. Rebeck can pretend that critical disapproval bothered Bernhardt, that she wasn’t a promotional genius who deliberately turned “disgrace” to her advantage every time. Changing the record isn’t necessarily a problem: Shakespeare made his historical characters do all sorts of stuff they didn’t really do. 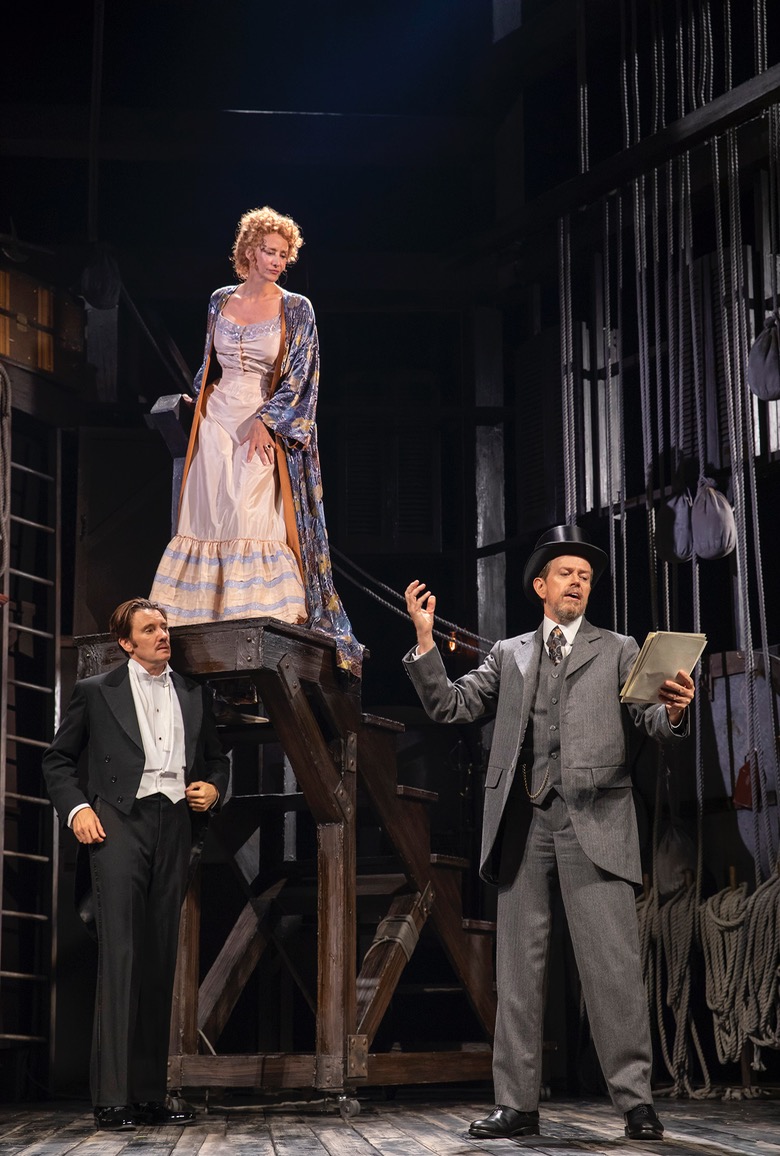 The trouble here is that the confusion over these issues stems from a deep confusion in the plot itself. What is at stake? What is the conflict? The romance is a dud, partly because Harner wilts under McTeer’s blazing energy, partly because he keeps saying gluey garbage like “She is everywhere, in my sleep, in my dreams . . . in the moon, the owl, the laughter of my children.” And worse, as an adaptor, Rostand is anguishing over something that patently—even in the world of the play—doesn’t matter. Bernhardt is clearly in no danger: scene after scene involves Sarah/McTeer playing a slice of Hamlet so well our brains fall out of our heads. (We never hear any of Rostand’s efforts, so we don’t even have points of comparison.) There are second-act feints to ramp up the tension: charming Nick Westrate enters as Sarah’s son Maurice to hint at money problems; Mucha (Matthew Saldivar) worries he won’t get the poster right. Yet neither carries any sense of risk. Strangely then, for a play that uses Hamlet as its anchor, there’s a serious lack of struggle. We drive onward to our climax—Sarah, fists clenched over her head, vowing to never again play the ingenue—without ever having heard someone say to her, “Play the ingenue.”

Yet despite a structure built on sand, there are keen pleasures to be had. Rebeck clearly loves Hamlet, and her writing shines whenever her characters discuss the Dane’s motivations. Director Moritz von Stuelpnagel has done some extremely crisp work. By casting Baker, who has a light voice—beautifully carrying, but as gently placed as a cold compress—von Stuelpnagel has given McTeer, who has a low throbbing tone, a perfect counterpoint. And when Ganis and Sandoval play Rosencrantz and Guildenstern with Sarah, the three of them make sense of a scene that has eluded a thousand other Hamlets. Rebeck’s play isn’t good, but the half-gestated Shakespeare inside it is superb. 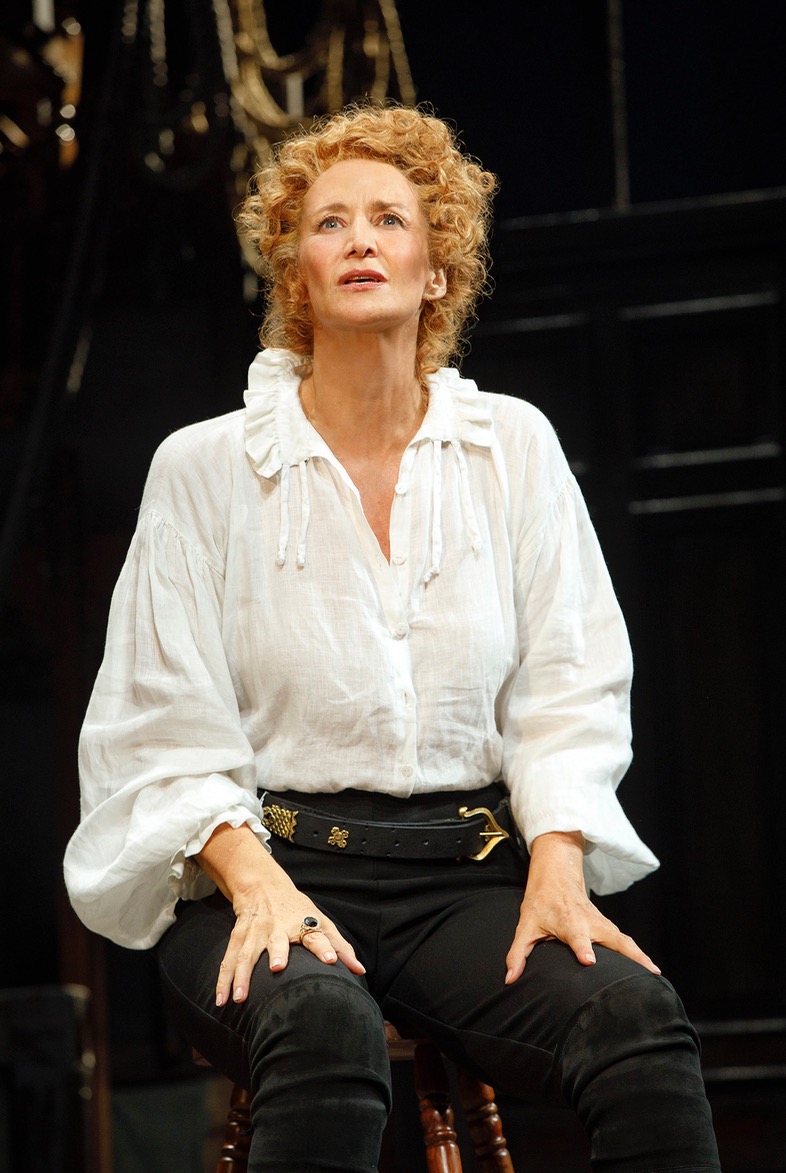 Women play men in Shakespeare regularly now: we’ve seen Harriet Walter play Henry IV; Glenda Jackson will be on Broadway soon in King Lear. And now we’ve seen a tantalizing glimpse of Janet McTeer’s Hamlet. In her, he becomes a vivid, optimistic being, a boy still hoping that his lying friends will turn honest, that his father might somehow escape from death. The actress returns repeatedly to certain gestures: a twisting hand at her side, a tongue that pokes out in unconscious thought, a way of speaking on the inhalation. It’s all so restless and hopeful! She has another trick too—no matter which direction her Hamlet faces, he always seems to be stepping forward and looking up. After a lifetime of mopey wafflers, this Hamlet acts as though he might manage to defy his own tragedy. Here is a sweet prince who would tear your heart out when he goes into his grave. God knows I mourned him every time he turned back into Sarah Bernhardt.

Helen Shaw writes about theater and performance in publications such as Time Out New York, Art in America, Artforum, and diversalarums.com.