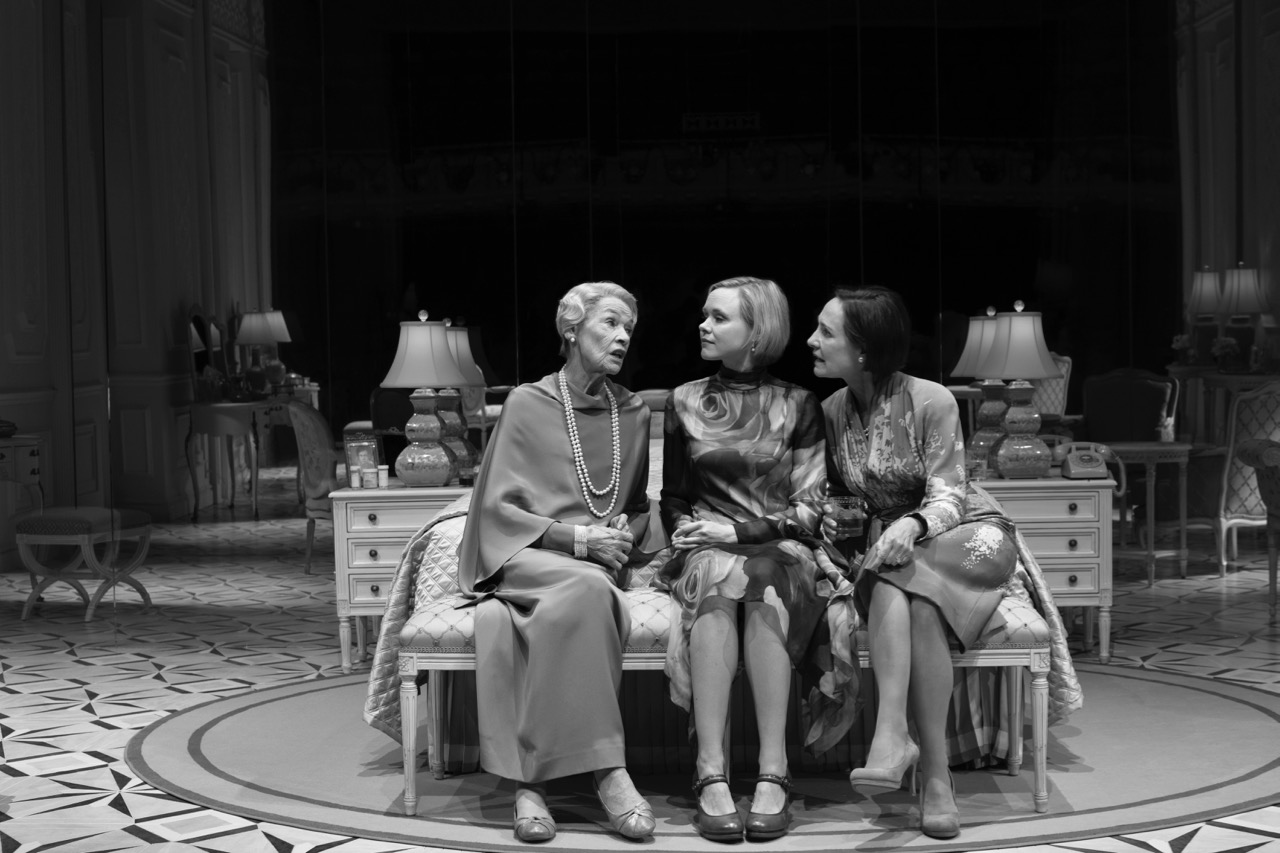 Edward Albee was very good at writing about his mother. He was good at several things, actually—he triggered the Off-Off Broadway movement in the 1960s; he skewered sacred American values (the Almighty Dollar, the Family) in full view on Broadway; he won three Pulitzer Prizes, and not even one was for his masterpiece, 1962’s Who’s Afraid of Virginia Woolf. In 1994 he won for Three Tall Women, the stunning deathwatch drama that has just been revived—beautifully, vigorously—at Broadway’s Golden Theatre. Women was the beginning of Albee’s own “third act,” his return from a midcareer deep freeze. And though it must have been strange, considering how chilly his relationship actually was with his gorgon-mother Frances (called Frankie), it was this posthumous portrait of her that folded him back into the public’s embrace.

As the curtain rises, we find ourselves in a high-ceilinged bedroom, where a ninety-two-year-old woman, simply called A, is holding furious court. She’s got her makeup on and her silver hair’s set, but—her arm hurts; she might be “doing in my panties”; she rants and reminisces and loses the thread; she keeps melting into tears. Actually, since she is played by Oscar-winning Commander of the British Empire Glenda Jackson, she shatters into tears, her moods calving violently like icebergs into the sea. 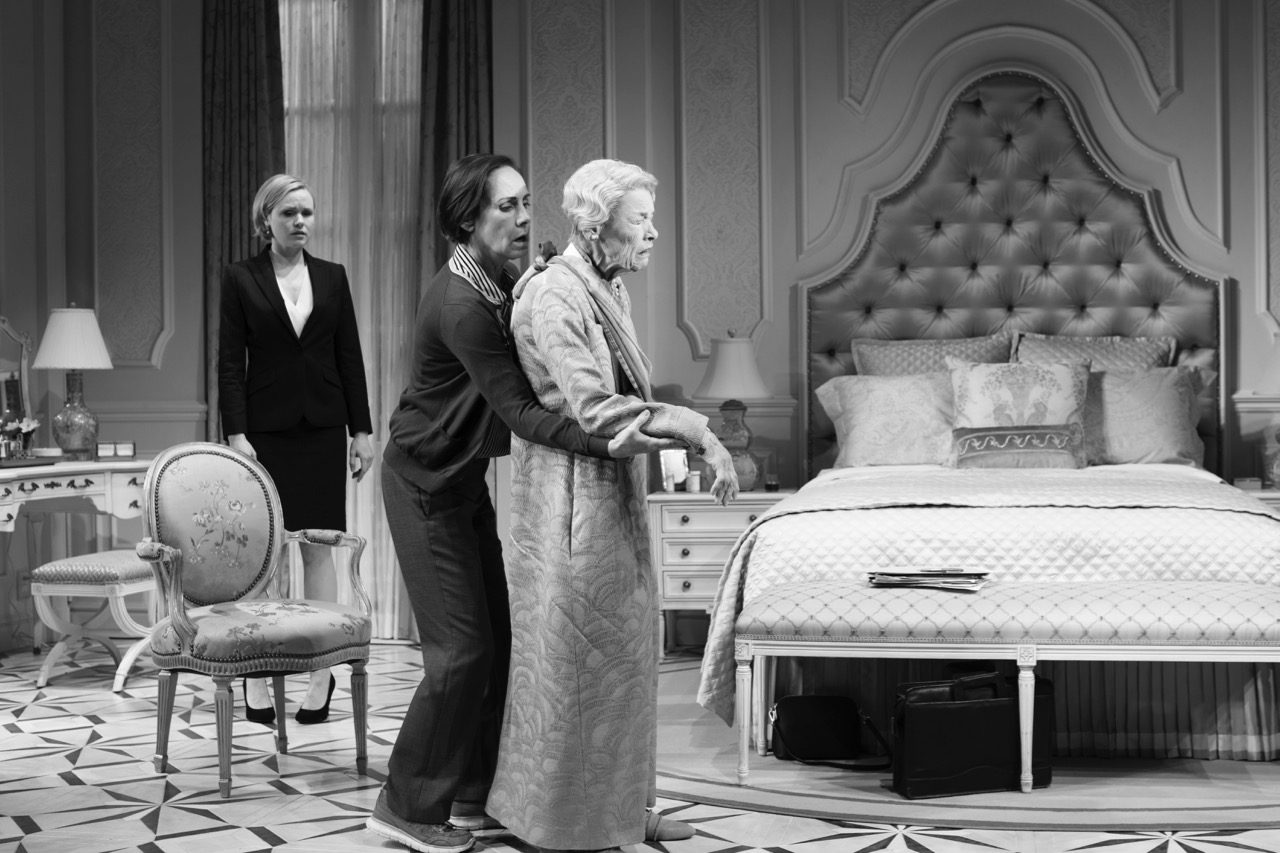 A is Tragedy at its most pitiful and splendid (tellingly, Jackson also just played the title role in King Lear at London’s Old Vic). She’s attended by Comedy—Laurie Metcalf plays A’s long-suffering caretaker B with hilariously syncopated timing, nodding along even when her charge turns nasty, chiding her when A breaks something in the offstage bathroom. These two are a double act, so the third character—Alison Pill’s C—can seem extraneous: both on page and stage, C is relatively unformed, a glossy lawyer there to help with the paperwork.

A may be deteriorating and wicked (she’s racist, anti-Semitic, grossly classist, and petulant), but she’s undeniably magnetic. When she starts revealing her dirty secrets, C and B can only sit riveted as she talks about her little dead husband “the penguin,” or her long-ago infidelities, or her grasping need for her son. My notes are full of sketches of Jackson’s mouth in this act, contorted into a trapezoid. It seems larger than it should, somehow. It seems larger than the stage. 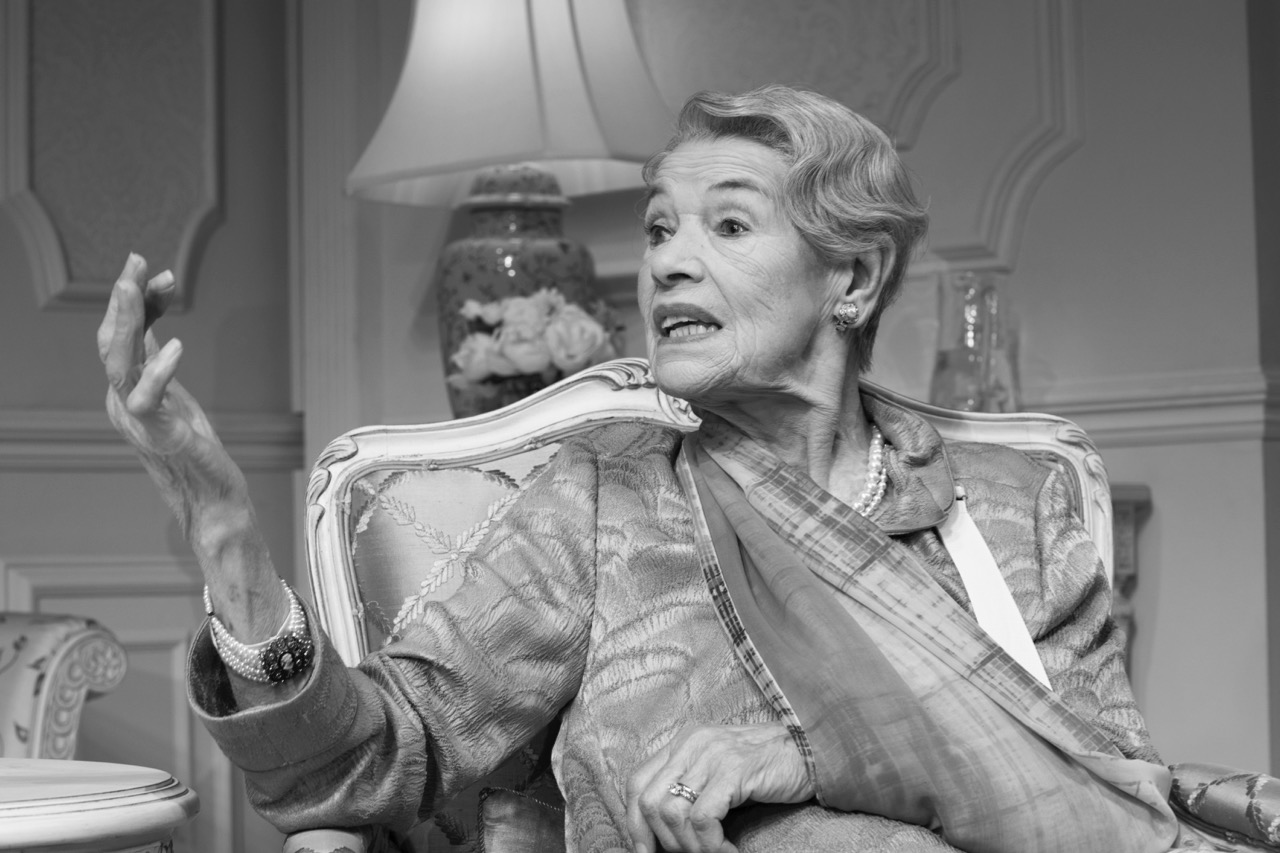 After something snaps in A, the world flips inside out. There’s a flash of light, and the back bedroom wall is replaced with glass. Beyond it, far in the back of the stage, we see a “reflection” of this same bedroom, the second bed pointing away, another Broadway audience (us, but dimly seen in an upstage mirror) looking down at it. That far-away space seems to belong to the “real” world; there’s a silver-marcelled head on the far bed’s pillow, an image of A still lying unconscious. The effect is of falling through the Looking Glass: what was a realistic set in “our” zone has suddenly turned into a mise en abyme, a limbo. A, B, and C come downstage of the glass wall, all dressed in gorgeous lavender eveningwear, queens of the topsy-turvy. They now represent three ages of A—twenty-six, fifty-two, and ninety-two—and they are waiting for that figure in the bed to die.

And just as the play skews strange and Albee-esque, there he is! The real man died in 2016, but somehow he’s also onstage at the Golden, pinning us with his old bleak gaze. The Boy (the program refuses to name the actor) comes to stare wordlessly at A’s comatose avatar, to bring her flowers and to hold her unresponsive hand. They’ve found a near double for the young Albee—before the Wilford Brimley moustache, back when he was dark and sullen and pretty. He stays deep upstage, back behind the glass wall, but the alphabet women in the foreground are constantly aware of him. He’s their recording angel.

Joe Mantello directs with a light, confident touch. The staging is simple: the women step forward for certain monologues or drift like plum-colored seaweed around the green room. The scene-change into the purgatory section is managed so deftly that we feel almost physically guided into it, Mantello and set designer Miriam Buether’s hands solicitously placed at our backs. Everything seems effortless—the three women (none that tall) don’t particularly try to act like facets of one mind, though Metcalf transforms her physical language from the first act’s rubbery commedia servant to someone who considers every . . . move . . . distinctly. And I actually rather appreciated the way that Metcalf and Jackson so blazingly outshine Pill. It’s not that Pill’s doing anything wrong—it’s just that women get more interesting as they get older. 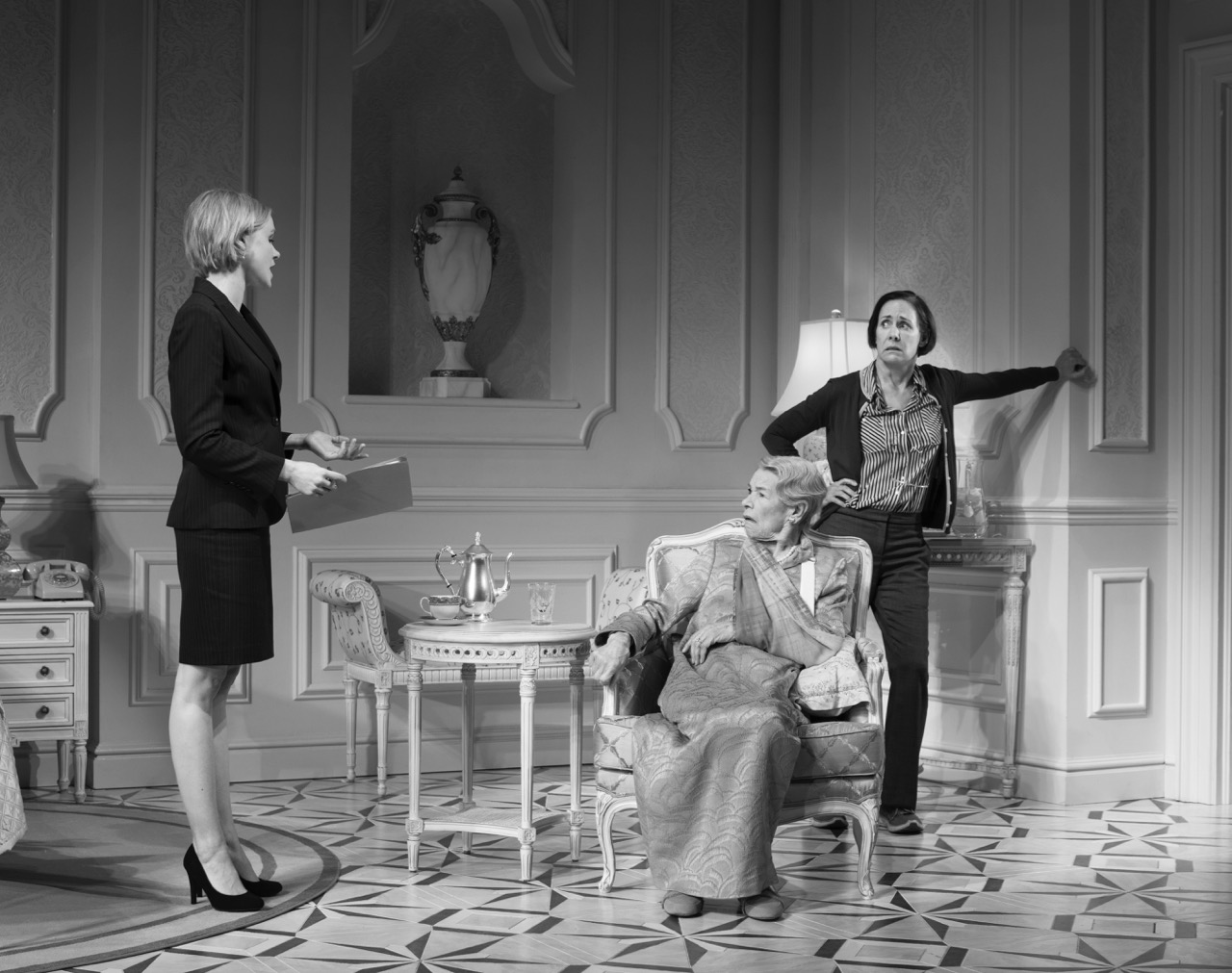 The critic John Lahr called Three Tall Women “cubist” because we see one woman in many phases, splintered and iterating and freezing in time. Albee was also very clear that Women was autobiographical. After first turning his back on his mother’s homophobic bigotry and then manufacturing a new, brittle relationship with her despite it, Albee here tries to evaluate Frankie on her own terms. Elsewhere he lampooned his parents’ marriage—in A Delicate Balance (1966) and The American Dream (1961). But this is different. How, how, he was asking, does a person become this way? In the play’s algebra, C’s ambition and coquetry will shape her into the cynical, carnal B; in turn, B’s sense of injury and position—she hates her son’s gayness and her husband, but she feels full of her own power—will pickle her into A. Perhaps Albee didn’t love his mother, but he tried to understand her at the last, in part to heal himself. You can almost hear some of the less pleasant Albee attitudes, like his revulsion at the female libido, correcting themselves in front of you.

This is theater’s “mirror held up to nature” in its most ruthless form. Because while Frankie Albee was sui generis, her triptych looks like all of us. It captures the scorn we have for our younger selves—A and B constantly gang up on C—because we know, secretly, that our past self would be horrified at our failures and compromises. It also affirms our suspicion that, personality-wise, we’re getting worse. Albee loved parables; they show up everywhere in his plays. But if we think this one’s message is “know thyself”—it won’t offer much comfort.

Instead, I think, he was asking us to know each other. In Albee’s first play, 1959’s The Zoo Story, he set a pattern that continues unfolding in Three Tall Women. In Zoo Story, two men confront each other in Central Park, only for us to realize they are symbolically two halves of a single integrated man. For his long, long, brilliant career, Albee saw modern selfhood as something that’s been shivered apart, like a boat in a storm. We can hardly rebuild our personality while we’re standing on a disintegrating deck, yet—perhaps—we can be shipwrights to one another. In 1990, when he sat down to write, Frankie Albee had only been dead a year, and her relationship with her son had been poisonous nearly all their lives. But there Edward Albee was, carefully fitting her together: joint A into board B into joint C.