Will Eno’s new play goes gently into that good night. 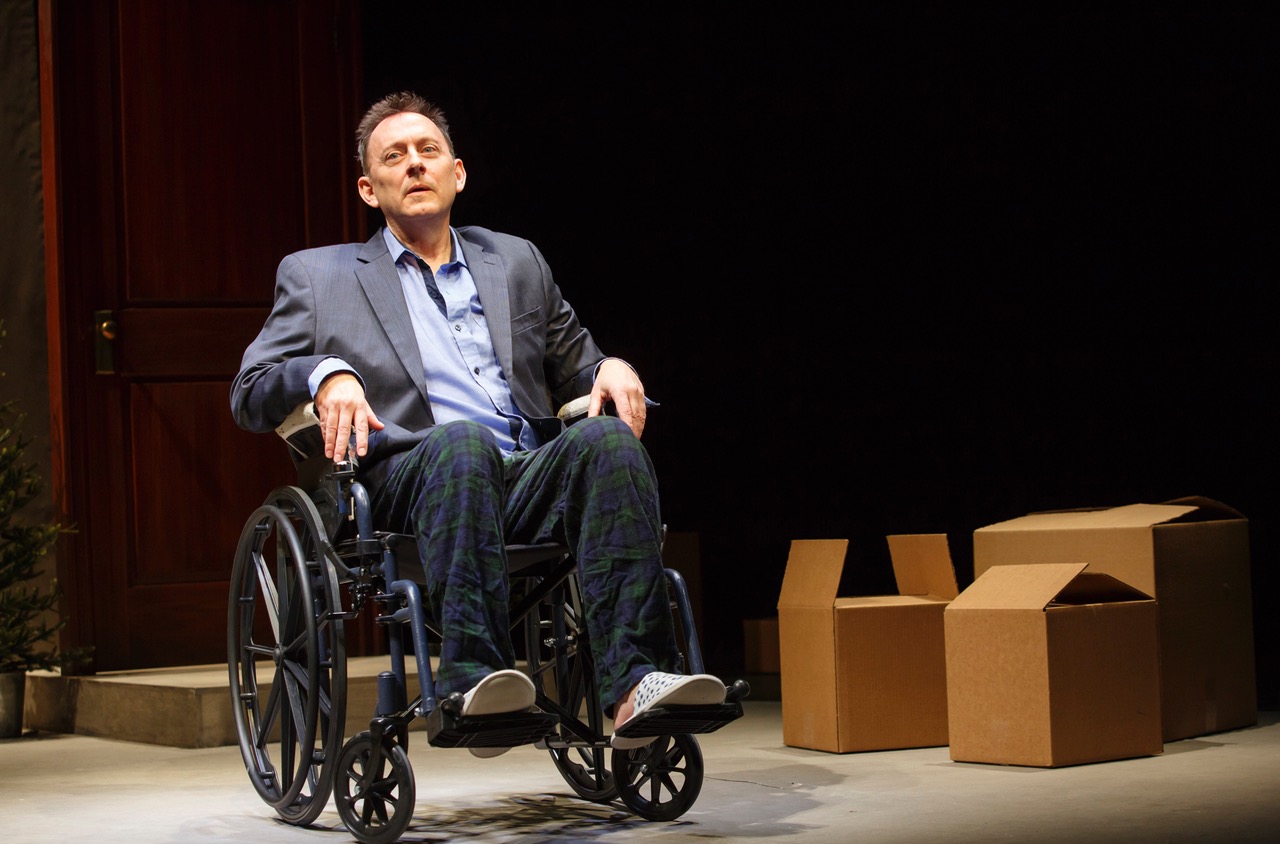 Once upon a time, duration equaled importance. The longer the play, the more substantial it was: you needed time to make an argument and build a world. But not now. A trend in serious playwriting has emerged—the tragicomic tone poem. From Young Jean Lee’s Lear to Adam Bock’s A Life to Will Eno’s exquisite Wakey, Wakey, these atmospheric dramas take, at most, eighty minutes.

Such plays are tastes, not meals. And to a man (or woman), they deal with the shortest, sharpest shock of all—death. (They can afford to be brief; the only thing they have to show us is the difference between “here” and “not here.”) As if in compensation for their grave subject matter, their literary texture is deliberately unpretentious. The sound is daily chat, aimless gossip, anything that seems inconsequential. And since these are threshold plays, the pieces don’t “progress” in typical theatrical fashion. Instead, they teeter; they hover. In the case of Eno’s Wakey, Wakey, now at Manhattan’s Signature Theatre, the audience drifts with its distracted interlocutor. We actually experience the floating sensation of losing, forever, our grip.

We first see the allegorically named Guy (played by Michael Emerson), dressed in only pajama bottoms, facedown on a beige carpet. He jerks up and stares at us. “Is it now?” he asks. “I thought I had more time.” There’s a swift blackout; lights up. And now Emerson is seated, a sports jacket on, nestled into a wheelchair and slippers.

The rest of the play is Guy’s presentation to the theater audience, a dryly funny lecture on nothing much, interspersed with things meant to provoke, entertain (a YouTube supercut of cute animals yelling), and enlighten. Eno’s atmosphere is all wry failure, full of doubts about how to proceed—“This was going to be a whole different thing”—and resignation at the inevitable technical disappointments. (A temperamental remote control is a predictably comic prop.) Guy is present with us, and he notices the audience, even singling out some theatergoers for small interactions. But he is also suspended in non-time, both dead and waiting to die. Guy wants to talk to us about how to handle mortality . . . yet he keeps veering off topic. “Certain words can carry their meaning right into our bodies,” he claims. “Joy.” He pauses to see if we have been infused with joy. “Light.” Getting no response from us, he shrugs: “It probably takes a little while.” 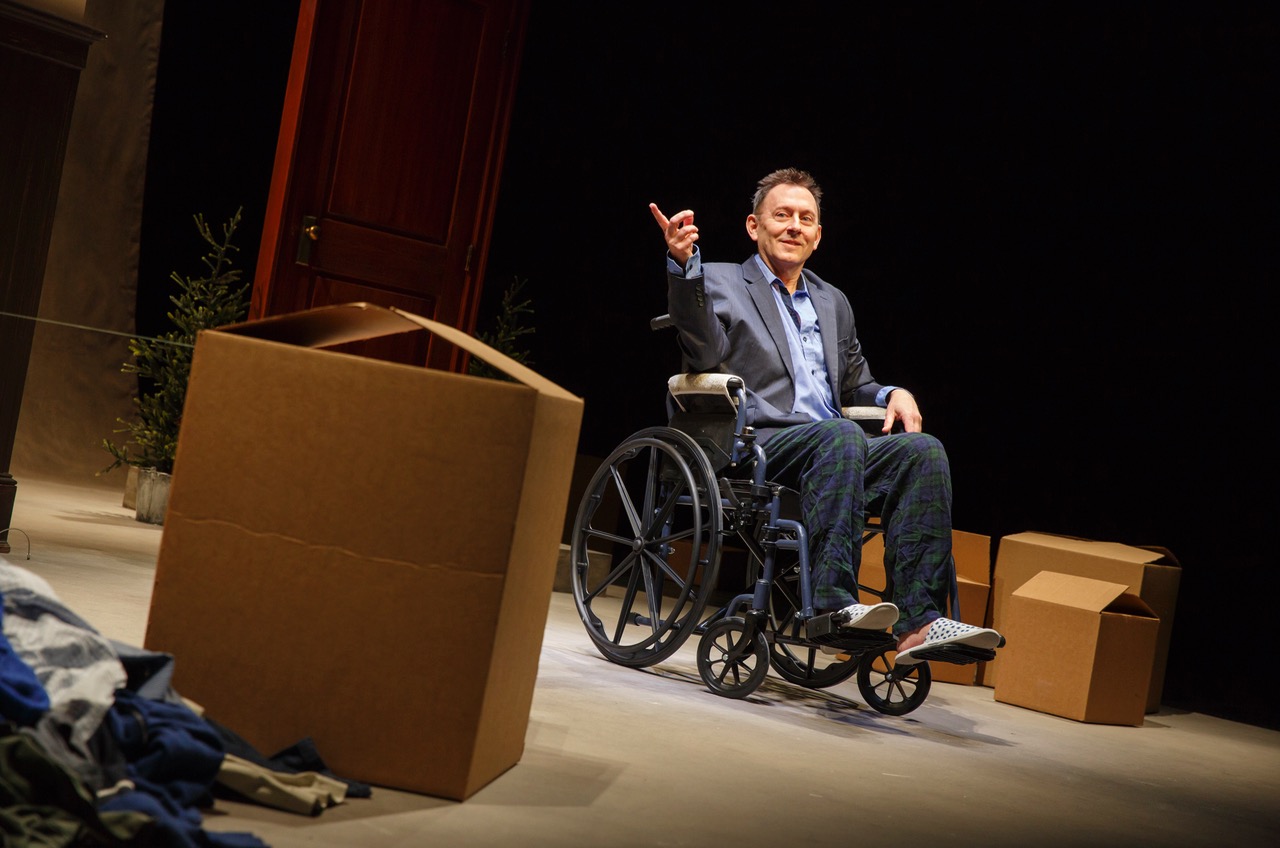 Eno, also directing, and designer Christine Jones make limbo an unprepossessing interior: a towering taupe wall, piles of cardboard boxes, a pile of discarded clothing. It looks a bit like a McMansion in the last stages of its owner moving out. A few touches hint that we’re in bardo, like a calendar with all the days x-ed off, and there’s a door standing in the middle of the floor, unattached to anything. Guy certainly isn’t keeping his terminal state from us; he shows us a slide of a hospital cafeteria in an end-of-life care wing and tells us, “We’re here to . . . say goodbye.” But all of it is done as jokes, offered with a Tig Notaro deadpan delivery. His nurse—or summoning angel—comes in (the infinitely warm January LaVoy), and she gives him a fortune cookie. “Fun . . . ,” says Emerson with a droll lack of enthusiasm. 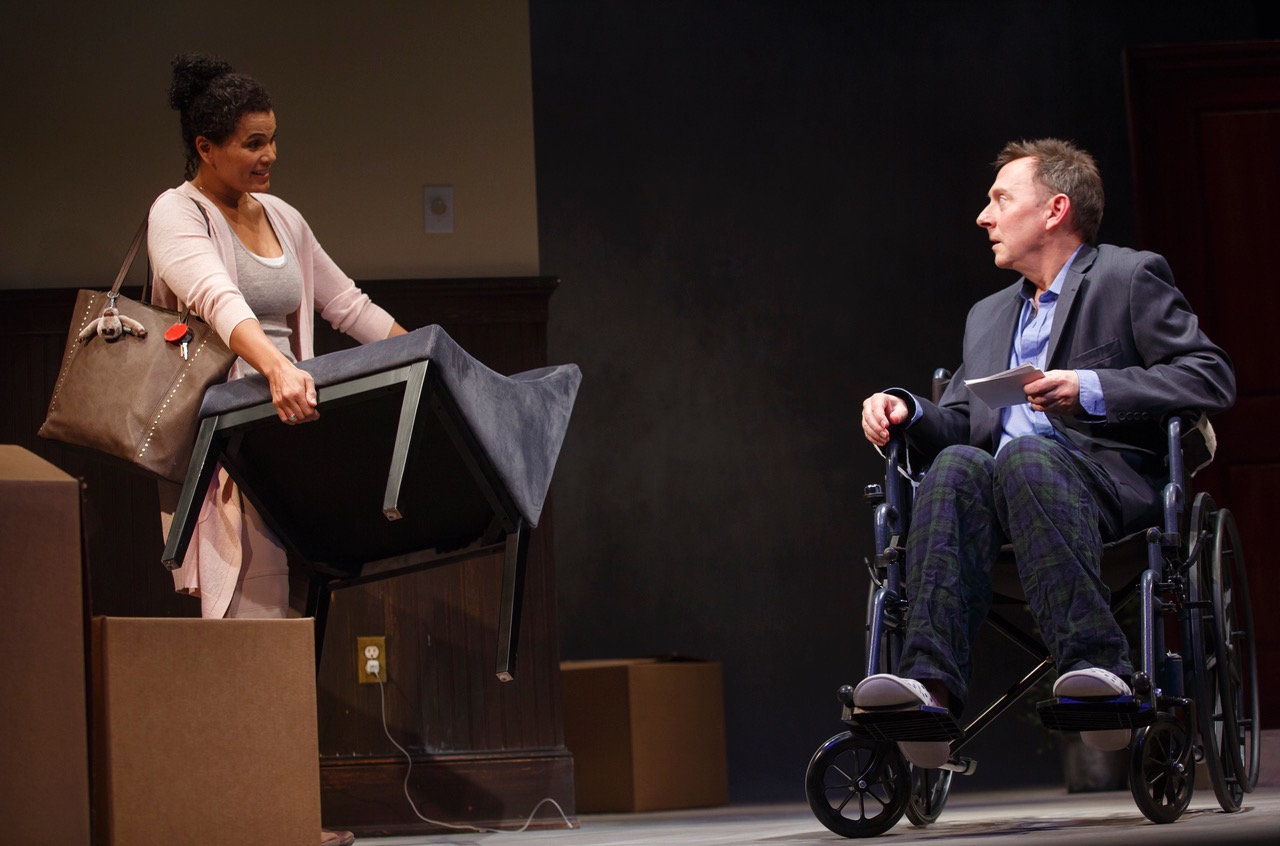 Emerson is the gentlest of presences; he favors us with shy smiles and peers at us like a short-sighted rabbit. But Wakey, Wakey does have bite. Emerson’s talk, delivered with the help of a stack of index cards, anticipates that the show may not make any real difference to us. “However you think of it, right now,” Guy warns us about the play, “is probably how you’ll think of it when it’s over.” But he goes on: “And whoever you are, you know . . . that’s who you’ll be on your deathbed.” There’s a sting in that. Eno likes to dig his spurs into his audiences: his bleak masterpiece Middletown deliberately taunts theatergoers with our hope for happy endings, for example. But Wakey, Wakey is only ever tart, not bitter. The show eventually effervesces; Guy drifts into his final sleep, and we’re left with a series of verging-on-sentimental gifts: more nature videos, a balloon drop, cake. We leave a bit stunned. Could that have been it? Surely there was more? And so Eno has used all his postmodern tricks to summon something quite realistic: the (occasionally tedious) sensation of waiting for a death we knew was coming—and the heartbroken conviction that things should have gone on longer.

In all these threshold plays, the brevity is crucial: it’s not aesthetics, it’s content. The fleeting quality forces us to register how difficult it is for the playwright to discuss death. Lee was talking (in code) about her ailing father; Bock was grieving both his parents. Eno is also bereaved. In Wakey, Wakey, he is staging a kind of wake(y) for James Houghton, the Signature Theatre founder who died last year of stomach cancer. In fact, the Signature is in a public season of private grief: we are now seeing the fruition of Houghton’s final round of commissions—the last pieces made under his eye and on the subject he requested. (Just down the hall in the same theater complex, Branden Jacobs-Jenkins’s Everybody is modernizing the mystery play to address this same transition into death.)

We learn something profound about loss from the way these threshold plays can’t go on too long. These dramas don’t end exactly—rather the playwrights’ hands fall open, and they let the plays go. As David Bowie faced his own death from cancer, he recorded a last album: Blackstar contains messages that would become his signals from beyond the veil. Houghton’s voice may not be as familiar as Bowie’s to most listeners; he was always most audible indirectly, through the playwrights he championed. Wakey, Wakey is, though, like Blackstar, a statement that outlives the man. Of course, “outlive” is the wrong word. An echo doesn’t “outlive” a sound. It is a different sound, continuing.