Literature
Instructions for a Funeral

We, the fragments: a new collection of stories from David Means. 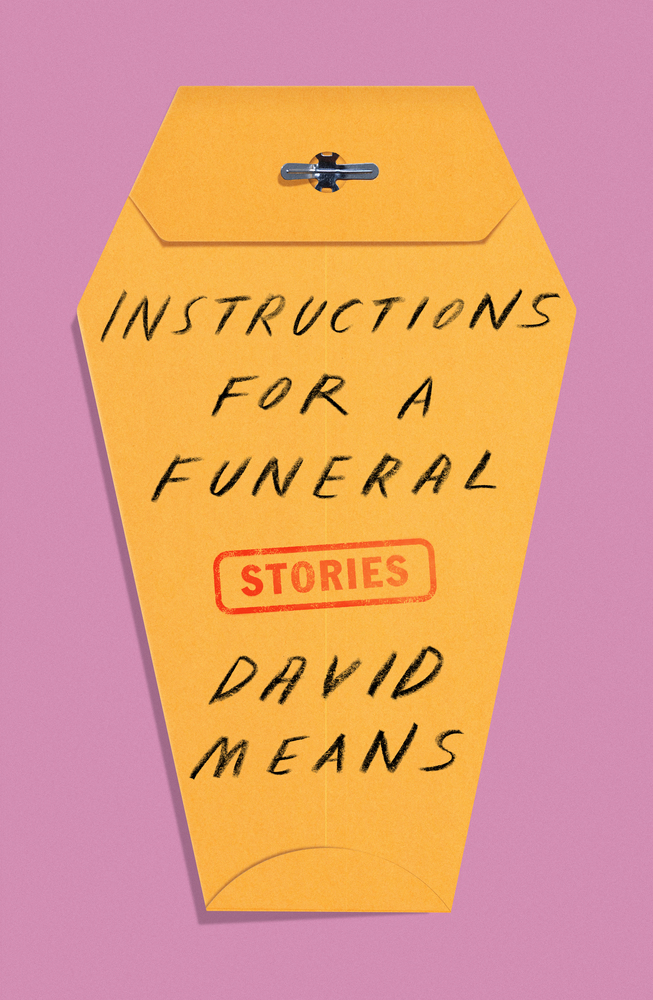 Instructions for a Funeral: Stories, by David Means, Farrar, Straus and Giroux, 189 pages, $25

David Means begins his fifth volume of short fiction, Instructions for a Funeral, with an epigraph from William Carlos Williams: “To refine, to clarify, to intensify that eternal moment in which we alone live there is but a single force—the imagination.” The line is both unsurprising (the imagination? what else are stories made of?) and also apt. Means has been working the sort of existential territory Williams invokes since the publication of his first collection, A Quick Kiss of Redemption, in 1991. In his stories, not much happens, but at the same time everything does.

“You’re aware—at least I am—that eternity will devour everything in its own time,” his narrator suggests in “Confessions,” the first of fourteen pieces in the new book, “and that whatever mark is left will be gone, because that awareness is essential to the work.” We are unsure whether the voice is that of the author or a fictitious narrator, but this is the point. For Means, stories are not so much answers as they are extended investigations in which we try to make sense of what we want to know, even though our efforts must remain, essentially, incomplete. “Of course, part of any job is to look like you’re doing the job,” Means observes in “The Butler’s Lament,” which revolves around a patient in an institution, “and to pretend to be exact even when in truth you’re never going to get close to the ideal point of precision.” What he is getting at is the conditionality of narrative, which in the end can’t help but fail to save us, even as it remains the only tool we’ve got.

This is the paradox—bleak, but also with its own edge of connection—that animates the stories in Instructions for a Funeral. The tales they tell are incremental, doubling back on themselves, starting in the middle, even as they project outward from the present into a future that is both inevitable and utterly unsure. In “The Ice Committee,” a pair of homeless men share the same memories with each other ad infinitum, as if they were the only fibers binding them to the world. These anecdotes have grown frayed from overuse and misdirection, the effect of drugs and alcohol, the pressures of living on the street.

“A deep knowledge of sequential events, a gloriously full understanding that once allowed him to speak with complete authority,” Means writes about the elder of the two, who used to be a professor, “had since fractured to shards.” Among those shards? All the information that he once possessed (his own internal narrative), which includes the family he left behind. “He felt the deep shame of the memory,” Means asserts, as the character recalls the wife he long ago abandoned: “the clutch of her long, elegant fingers around her chin and her beautiful, deep, sad brown eyes as he’d glanced back once last time before striking out, moving his feet over the ground day after day.” Retreat, regret, the immutability of the past, the weight of everything he’s lost or squandered: the implication is that something similar might happen to any one of us.

This is what makes Instructions for a Funeral so vivid: Means’s deep recognition that all of us are facing a common set of concerns. The individuals here, male for the most part, are largely down-and-outers: homeless, marked by mental illness, on the run, in the thrall of circumstances they can’t control. But they are also FBI agents, developers, family men. All are caught somewhere in their lives, broken into their own fragments, uncertain of where they’re going or where they’ve been. The narrator of the title story may be planning his memorial service, but as he glosses and dissembles, using his instructions to expose the people he imagines will survive him, we begin to understand that he is confessing his own indiscretions, as well. He is not exactly dying—“Everything, right now,” he reassures us, “is safe and cozy”—but he is guilty of having betrayed a friend who also betrayed him. “If I tell this story to my son,” he repeats over and over, as if unaware that, by articulating it in language, he is indeed telling it to his son. The narrator wants to set the record straight, to declare himself in a linear fashion, but he cannot because his narrative takes place less in the world than in the territory of his heart.

Nowhere does such a conflict emerge more fully than in the two stories that wrestle with the specter of a homeless brother—the author’s or the narrator’s, it remains unclear. In each, that brother is named Frank or Frankie, and other details overlap as well. Rather than confuse us, this doubling draws us in more fully, making us feel (rather than merely understand) the murkiness of what’s at stake.

The first, “Farewell, My Brother,” begins with a group of men smoking outside a halfway house. The setting is similar to that of “The Ice Committee,” although Means destabilizes the narrative by invoking a first-person voice that is initially elusive, but becomes more fully dimensional the further we read. “I’d like to pause at this point,” that voice insists late in the piece. “If I put Frankie’s story in here, flashing forward, it would seem forced and ill-suited to the actual situation at hand, which included me at the top of the stairs.” This is the first time we see the narrator step into the scene he is describing, although even here, he remains on the outside—connected, present, but also helpless to do anything other than stand apart.

Such a sensibility is echoed in “Two Ruminations on a Homeless Brother,” which closes the collection with a series of riffs on detachment: between the brothers, and between each of them and the world. The story opens by describing the routines of a homeless man entirely from a distance; there is no indication, other than in the title, of the relationship between observer and observed. Then, the voice shifts into second person, a deflection echoed by the phrase that starts every ensuing paragraph: “It’s not just that . . .” The effect is that of an inquiry, a narrative without resolution, which, of course, is what “Two Ruminations” represents. “It’s not just that,” the narrator reflects, “in the car before going up on the third visit you’d granted yourself a bitter kind of solace, because you were not locked up there and he was.” There we have it, proximity and distance, the realization that there is no happy ending, that a bitter solace is the only one we get.

For Means, this is not a matter of desperation so much as it is one of acceptance, or perhaps it is a bit of both. We all exist at a distance from one another, and even memory is unreliable and will desert us, which means that our connections will be tenuous, impossible to hold. How to write about such dislocation? How to exist within it? The conundrum is one to which he returns throughout the book. The only solution, the bitter solace, is imagination. Or, as Means puts it: “If I could get even a fraction of this down in some kind of pure form, I would be able to lean back, rest, and simply live in the world.”