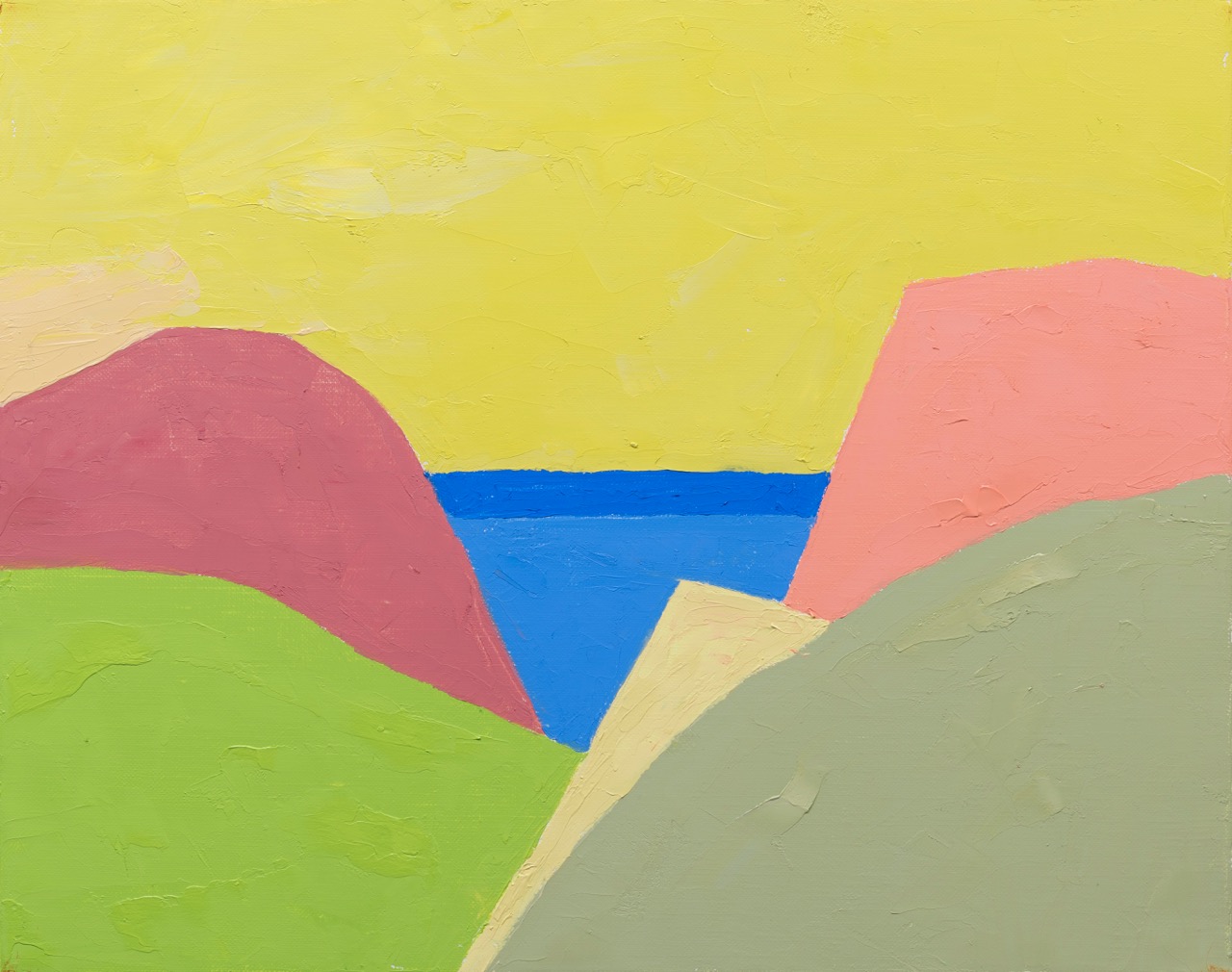 When the poet and painter Etel Adnan was fifteen years old, her mother pulled her out of school to work. This was in the early years of World War II. Beirut, where Adnan was born, was a boomtown at the time, but it had been thrown into turmoil—not by actual fighting but by an influx of soldiers and sudden inflation. Adnan joined a generation of young women who took odd jobs around the city to support their families and help offset skyrocketing prices. Her job was in the French Information Bureau, in an office responsible for influencing perceptions of the war by distributing news briefings to local papers. She quickly won the trust of her employer and assisted in his correspondence.

This gave Adnan an unusually clear sense of how politics happened and how the war was being fought. The job fascinated Adnan but she was desperate to resume her studies. Her boss gave her mornings off to prepare for her baccalaureate exams in secret. She passed with high honors and earned a place in a newly opened night school for poetry and philosophy known as L’École des Lettres. Her writing greatly impressed her teachers, who secured her a scholarship to continue her studies in Paris. Adnan’s mother was so enraged by the idea of her daughter leaving that she threatened to blow up the school with a grenade. (Adnan delayed for two years but eventually made her way to the Sorbonne.) 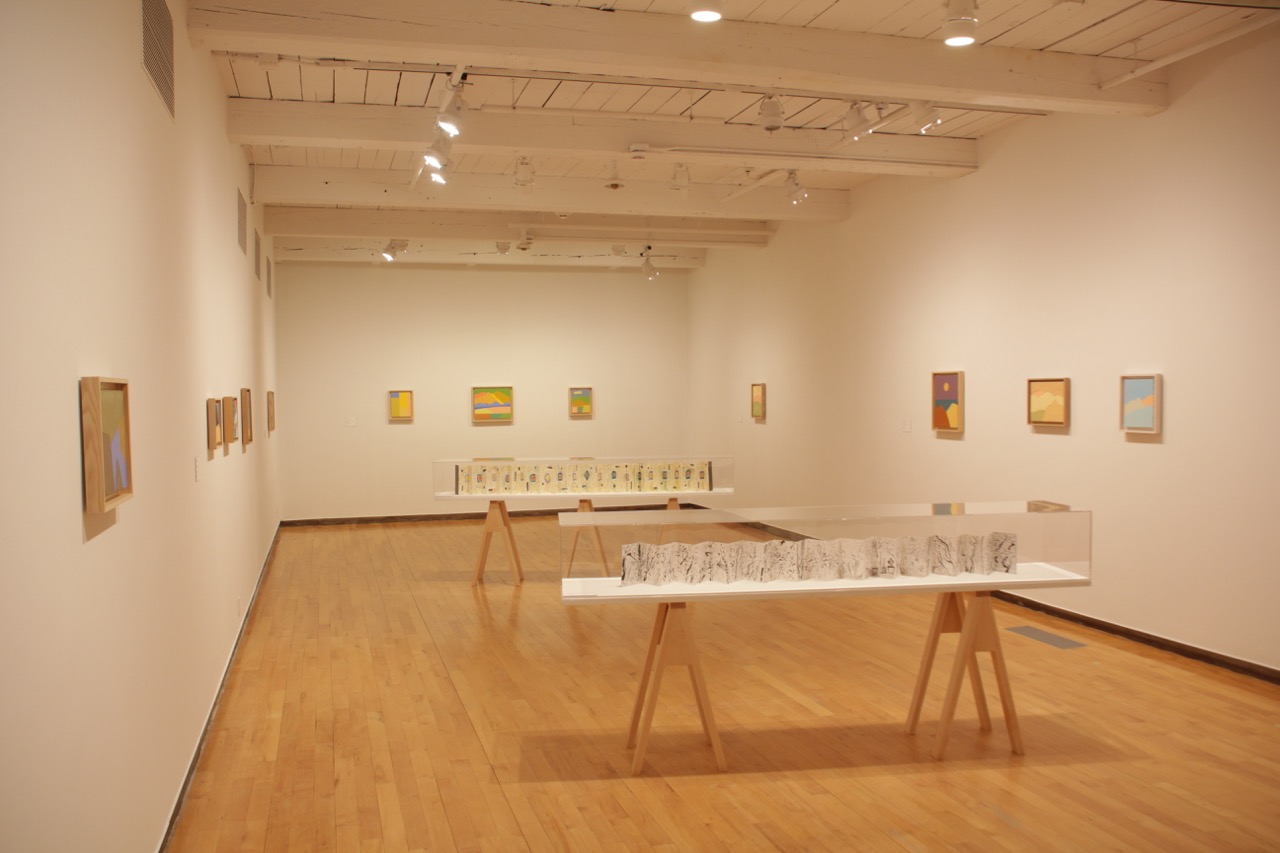 This anecdote from Adnan’s early life came to mind while viewing the artist’s current exhibition at MASS MoCA, a reminder of how much her vision of the world has been formed by violence, whether it was the belligerence of her own mother or devastating events in the wider world. The show is a tiny, supremely peaceful, vault-sized installation of just sixteen small paintings and two accordion-folded artist’s books. Visitors enter through a set of glass doors and pass through a deep-green antechamber, scattered with soft seating, where eighteen of Adnan’s books of poetry and prose are available to read. Organized by Elise Y. Chagas, a curatorial fellow from Williams College, the exhibition is titled A yellow sun A green sun a yellow sun A red sun a blue sun, after the first line of Adnan’s monumental, book-length poem The Arab Apocalypse. It’s a deceptively descriptive line. Scan the room and you’ll indeed find subtle variations on all of those suns in Adnan’s abstracted landscapes—a yellow one, an orange one, brown, an arrangement of pink and blue orbs, a vivid red square that appears star-like in its aspect, set against a deep blue sky. But all of those shapes add up to the crystal-clear realization that the title is far from literal.

It took Adnan years to write The Arab Apocalypse, which was first published in French in 1980. She translated the book into English herself, in 1989. It fell out of print for decades until her publisher, the Post-Apollo Press, run by Adnan’s life-long partner Simone Fattal, issued a new edition in 2007, with an emphatic introduction by the theorist Jalal Toufic. Punctuated by an expressive system of hand-drawn symbols (including circles, arrows, grids, and dots), it is Adnan’s most brutal piece of writing, a searing critique of the massacres and atrocities that we, as a species, have inflicted upon ourselves and our planet. As Chagas describes it, The Arab Apocalypse is “a delirious text that seems to be on fire, summoning and conflating burning suns and smoldering encampments.” By naming her show for a line that so effectively does two divergent things at once, describing the pacifist nature of Adnan’s canvases while introducing her most memorable rumination on violence, Chagas is posing an important curatorial question, one that has become prominent in the wider effort to give Adnan her due: How does one reconcile the destructive forces at work in her writings with the air of serenity that emanates from her paintings? 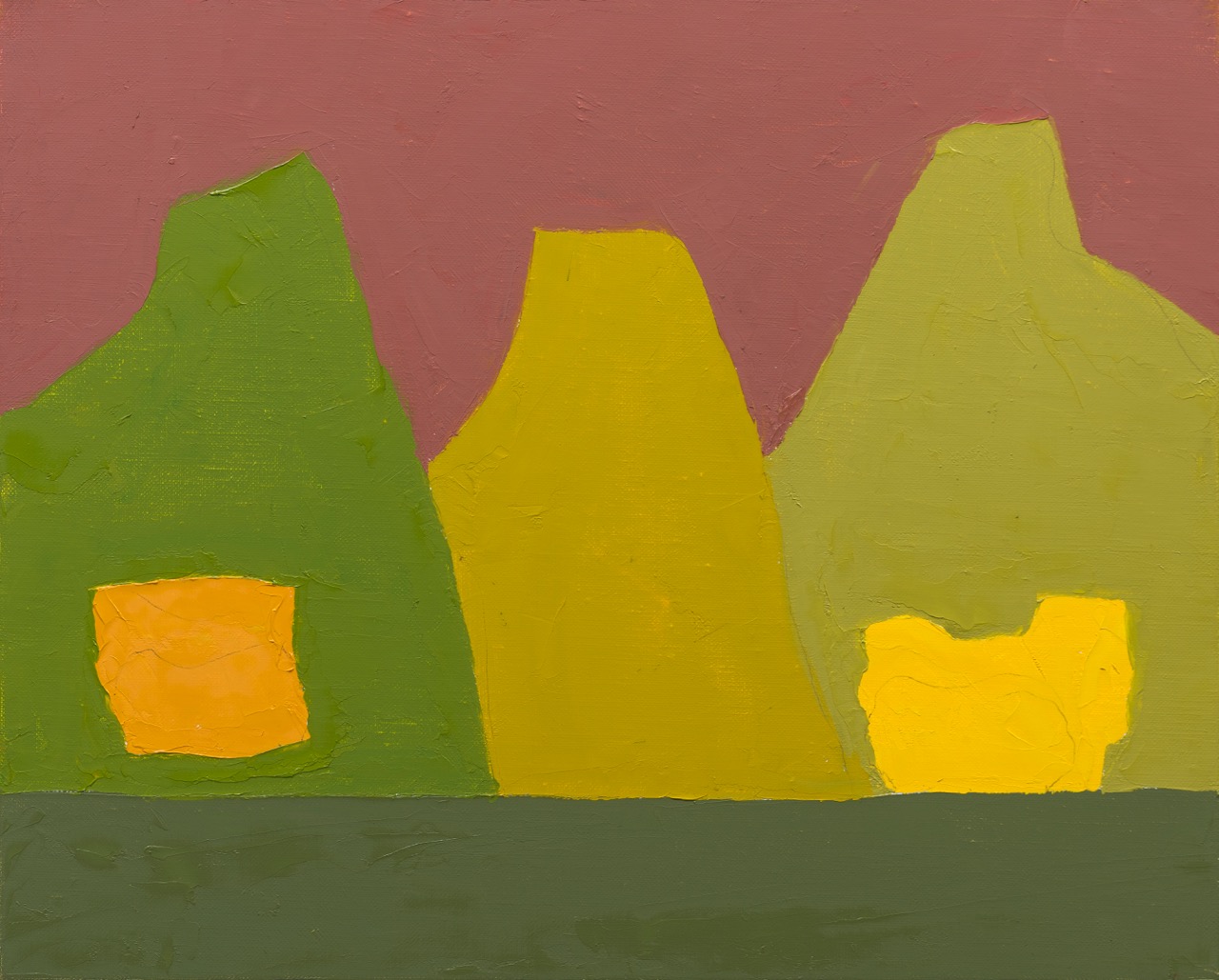 Chagas’s answer is to contain them within an extremely tight space, which makes for a highly intimate encounter with Adnan’s paintings while allowing for tensions to mount, should you choose to sit down and begin reading. (This also helps to distinguish the show from the postindustrial sprawl that characterizes the rest of MASS MoCA, which privileges monumental installations in cavernous spaces that would dwarf Adnan’s work.) Adnan always paints flat on a table, on the scale of a book or a dinner tray, and she usually completes a canvas in a single sitting. She works exclusively with a palette knife, and there is one lesser known, undated work on view—baby blue paint slashed over smears of light brown and a wrist-flick of green—that perfectly exemplifies how, in certain instances, the movements of her body and the manipulation of her tools both mimic and mirror the often aggressive imagery of her writing. Just as Adnan’s suns and moons and celestial squares appear consistently throughout her paintings and poems, the same fraught dualism between tranquility and turbulence emerges, with time, in virtually all of the work she does, from her writings and paintings to her tapestries, ceramics, and films. It is as if to say that this is us, we humans as tragically flawed creatures, who are capable of such splendor and ugliness all at once. 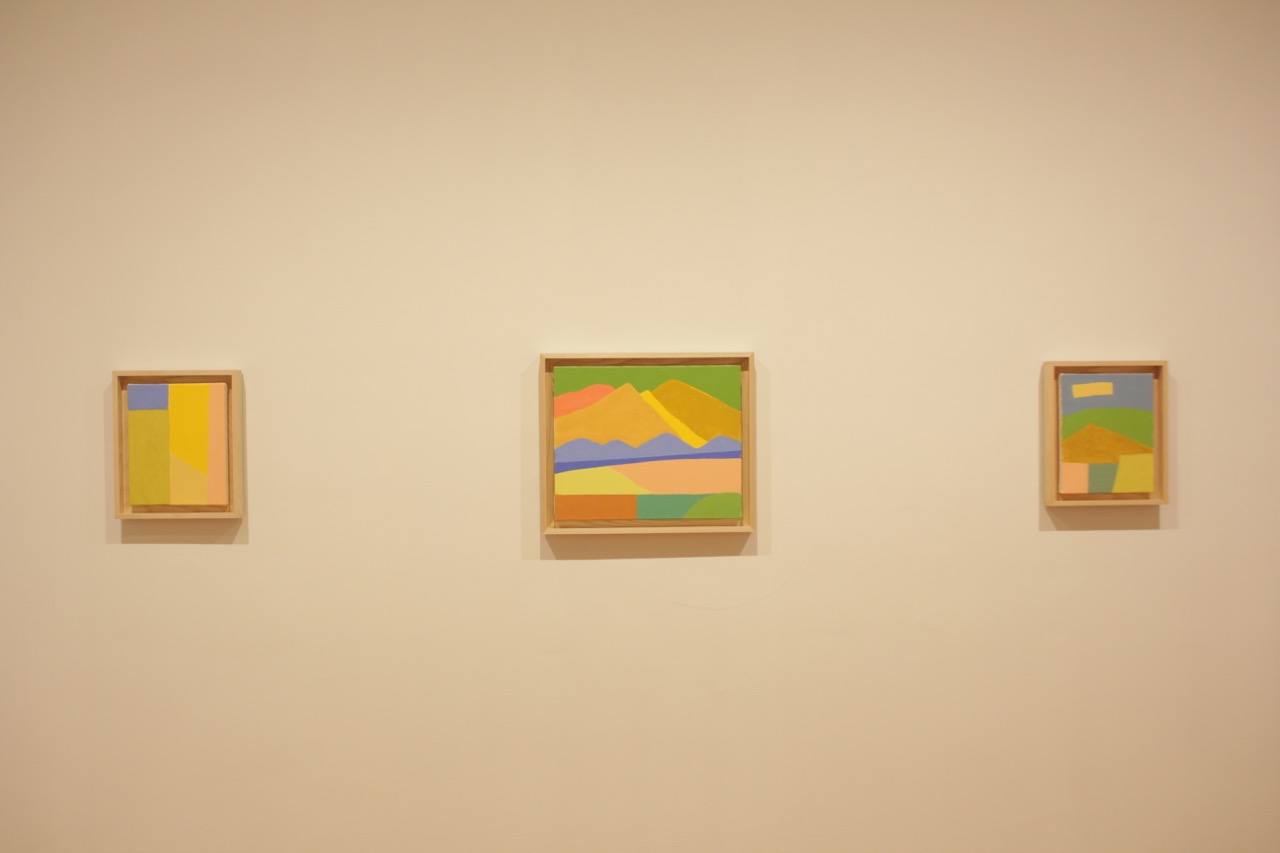 A yellow sun is one of four solo exhibitions devoted to Adnan’s work scheduled to open in 2018 in the United States and Europe. The industry of interest around her art has been building steadily since 2012, when Carolyn Christov-Bakargiev included some forty of her paintings in her edition of the quinquennial exhibition Documenta. Chagas’s effort will almost certainly be the smallest of Adnan’s exhibitions this year. It presents a remarkably judicious edit of hundreds, possibly thousands of paintings that Adnan has made and scattered around the world. (She began painting in California in 1959, at the age of thirty-four, and spent years living in the US, Lebanon, and France, often without formal gallery representation, giving works away to friends and colleagues.) There are several examples of the mountain paintings Adnan has made with great devotion, starting in the early 1980s, after she returned to California following a bruising five years working as a journalist in Beirut, just as the civil war in Lebanon began. There is a gorgeous untitled painting from 2016, which is related to two of her more recent series, The Weight of the World, which she began in 2016, and The Weight of the Moon, which she started last year. There are clear landscapes and pure abstractions, one artist’s book (Pirkle Jones’ World, Outside, 2001) entirely devoid of words and another (Kalimat II, 2015) that peppers the Arabic words for day, light, color, book, poetry, and revolution into a matrix of painted signs and symbols. The juxtaposition between the two artist’s books adds to the dialectic between poetry and painting that Chagas explores as central in Adnan’s work. 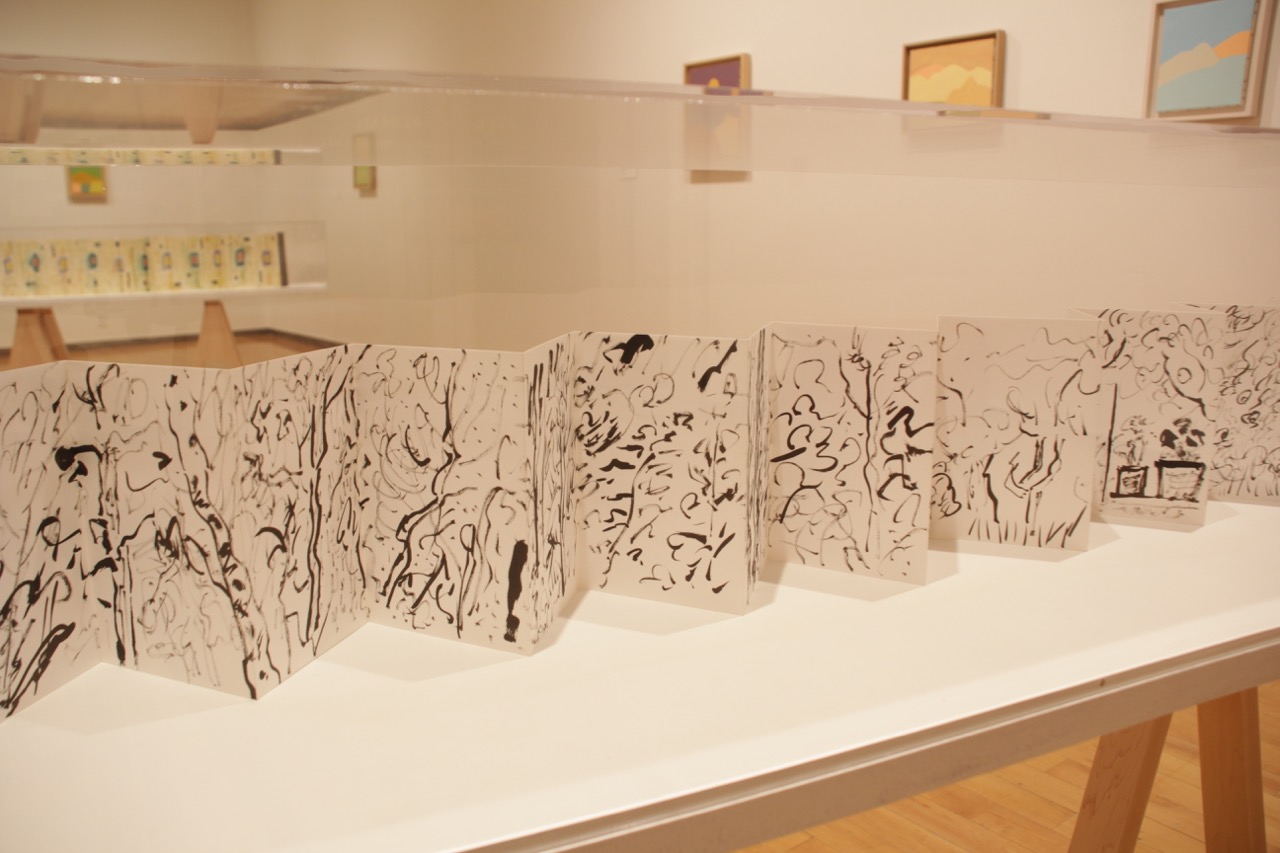 Adnan is now ninety-three years old. In addition to a hostile mother, she has overcome all manner of obstacles and constraints—of gender and sexuality, of traversing multiple languages and geographies—to become the singular creative force she is today, as prolific and active as ever. What stays in the mind, about her work in general and this show in particular, is how little struggle Adnan displays, in any media, even while articulating such difficulties, holding beauty and horror in hand, refusing to let either of them go.

Kaelen Wilson-Goldie is a contributing editor for Bidoun who writes regularly for Artforum, Bookforum, Aperture, and frieze. Her first book, on the paintings of Etel Adnan (Lund Humphries), will be published in June. Her second, on contemporary art in post-war, reconstruction-era Beirut (Kaph), will be published in 2019. She teaches in the MFA Art Writing Program at the School of Visual Arts in New York.