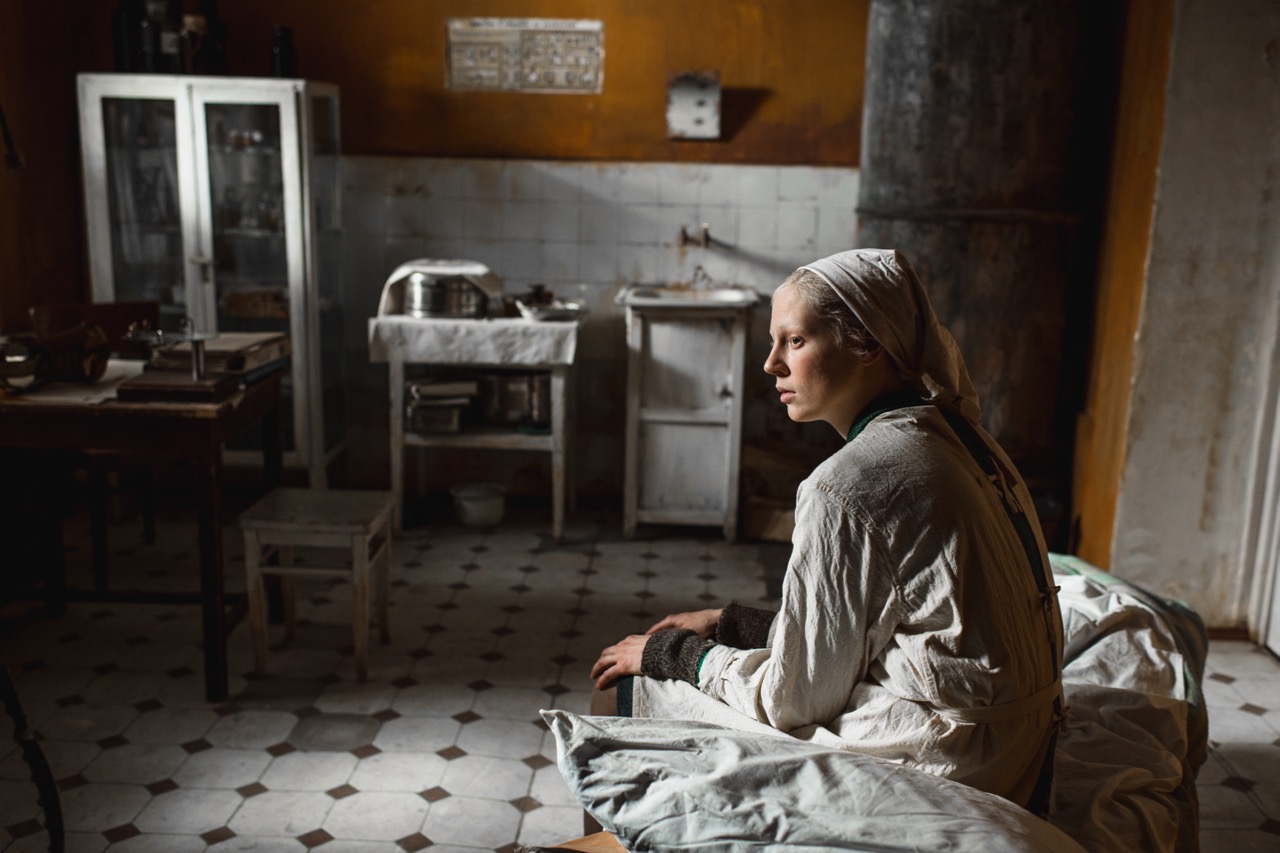 “For us pain is art,” the Belarusian writer Svetlana Alexievich declares in her introduction to The Unwomanly Face of War: An Oral History of Women in World War II. First published in 1985, Alexievich’s book collects the memories of women who fought in the Soviet Army during the war, a number that totaled nearly one million. Kantemir Balagov has stated that Alexievich’s chronicle provided the “main inspiration” for his narrative feature Beanpole, which premiered at Cannes and was a main-slate selection for the New York Film Festival last year. Centering on two female vets in Leningrad immediately after WWII, Balagov’s movie, which he cowrote with Alexander Terekhov, exposes the hazards of trying to forge art from pain, the perils of dramatizing trauma.

The title refers to the nickname given to the ectomorphic Iya (Viktoria Miroshnichenko), a young nurse in a hospital for wounded soldiers. She is heard before she is seen: as the opening credits flash onscreen, we listen to a cacophony of squeaks and gasps—sounds that recall the Tin Man before he is oiled. First shown in extreme close-up, Iya, in the midst of a cataleptic episode, is revealed as the source of those odd noises; her condition, called post-concussion syndrome, is the result of injuries she sustained while serving at the front as an antiaircraft gunner. We will see her several more times in this trancelike state—which, barely fifteen minutes into this two-hour-plus film, leads to a fatal accident. 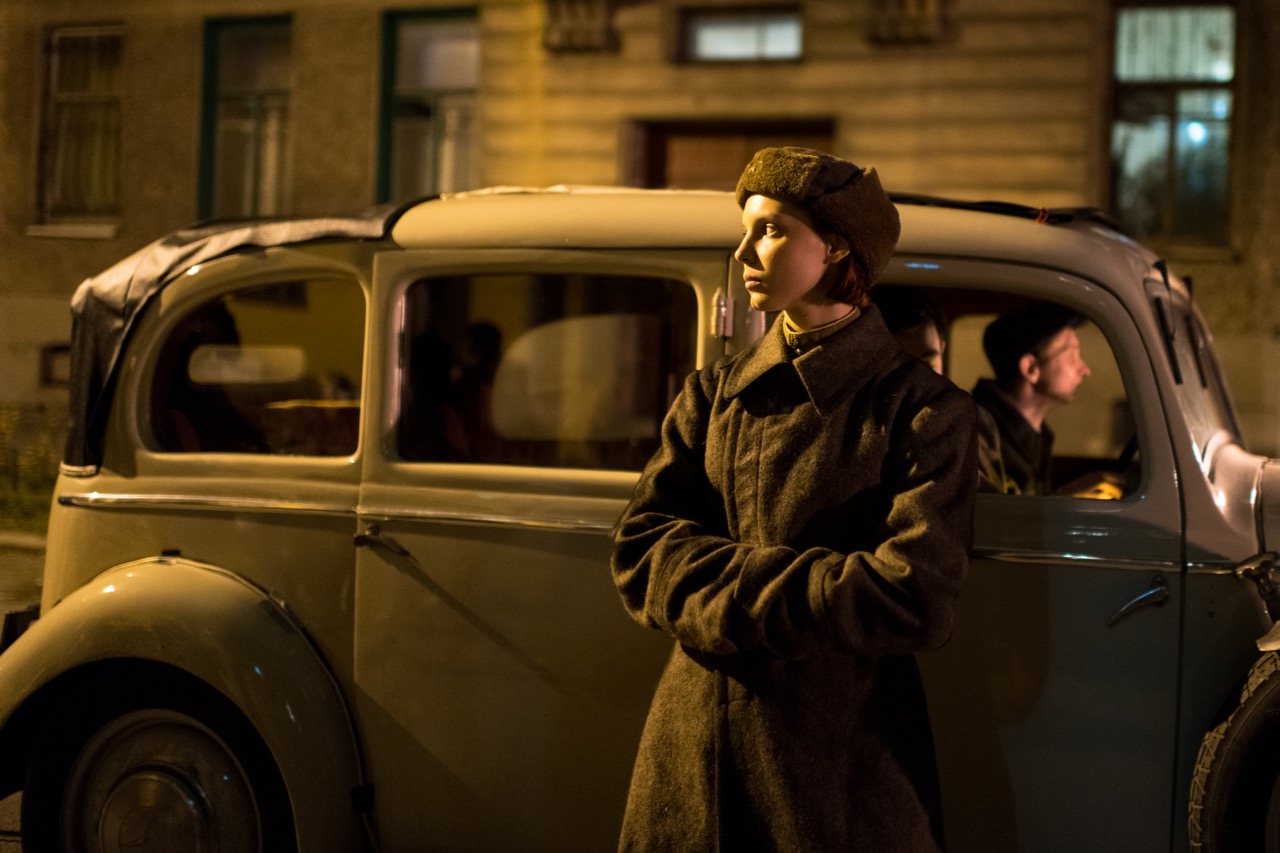 However shattering, this calamity also plays as the first of several incidents and revelations in Beanpole that struck me as overdetermined, schematic—and weirdly impersonal. Miseries become predictable; more than once I found myself simply waiting for X terrible event to come to pass. Misfortunes multiply when Masha (Vasilisa Perelygina), who had fought with Iya at the front, tracks down her old comrade at Beanpole’s crumbling apartment. Swimming in a too-large Red Army uniform festooned with an abundance of medals, and with an odd half smile on her face, Masha immediately signals mental imbalance. She is physically damaged, too, evidenced by her frequent nosebleeds and the several inches of scar tissue just below her pubic region. Resolved to have a child, no matter how broken her mind and body, she initiates some backseat rutting with a sheepish stranger named Sasha (Igor Shirokov). 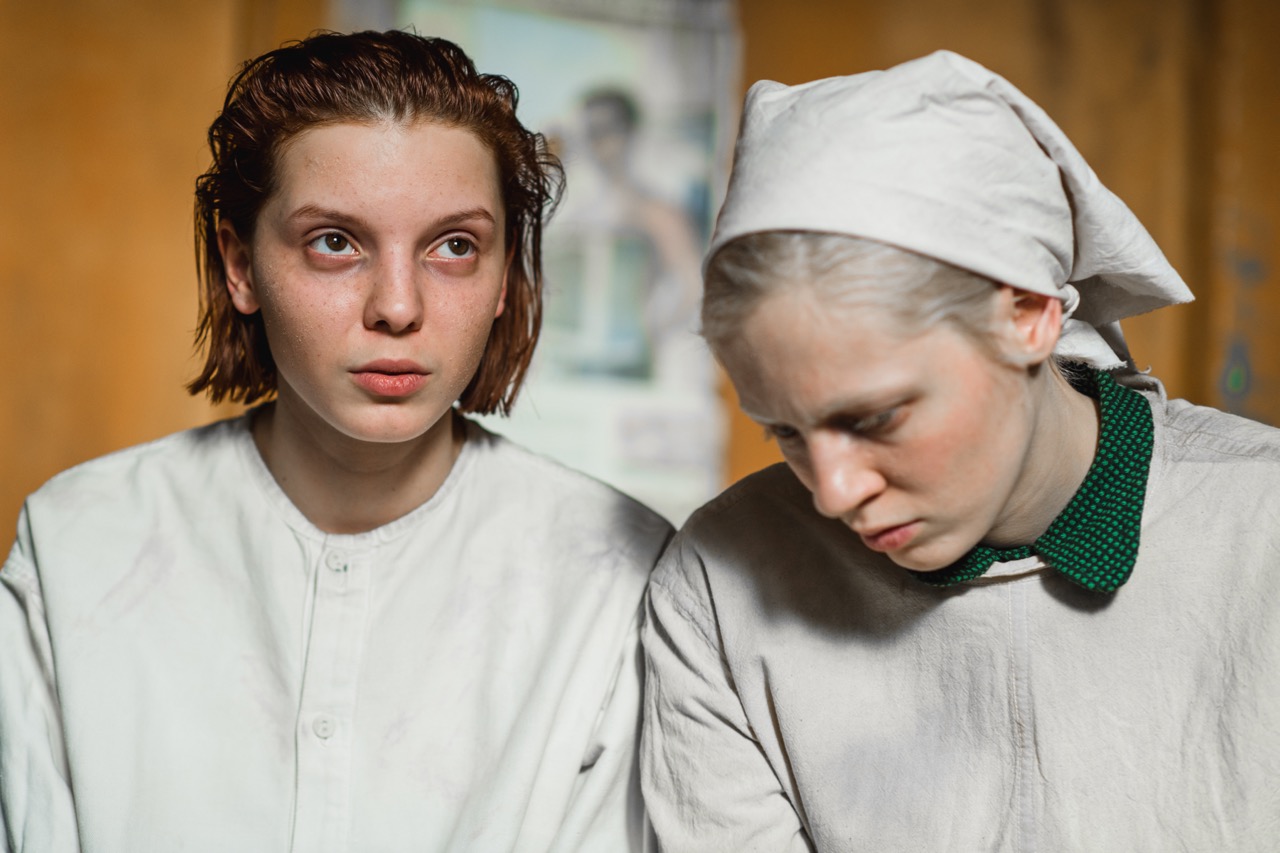 Masha’s resolve to procreate, we learn quickly enough, is yet another sign of her cracked psyche. After Nikolay (Andrey Bykov), the middle-aged supervising physician at the hospital who gives Masha a job there as an attendant, tells her “There’s nothing left inside you to make a life”—what that first glimpse of her cicatrix already strongly suggested—she insists that Iya function as her surrogate. Horrified, Iya nonetheless agrees, for she is not only in love with Masha but also eager to atone for the earlier death she inadvertently caused. Masha selects Nikolay to impregnate her friend, threatening to blackmail him—she has witnessed him authorize mercy killings—should he refuse. 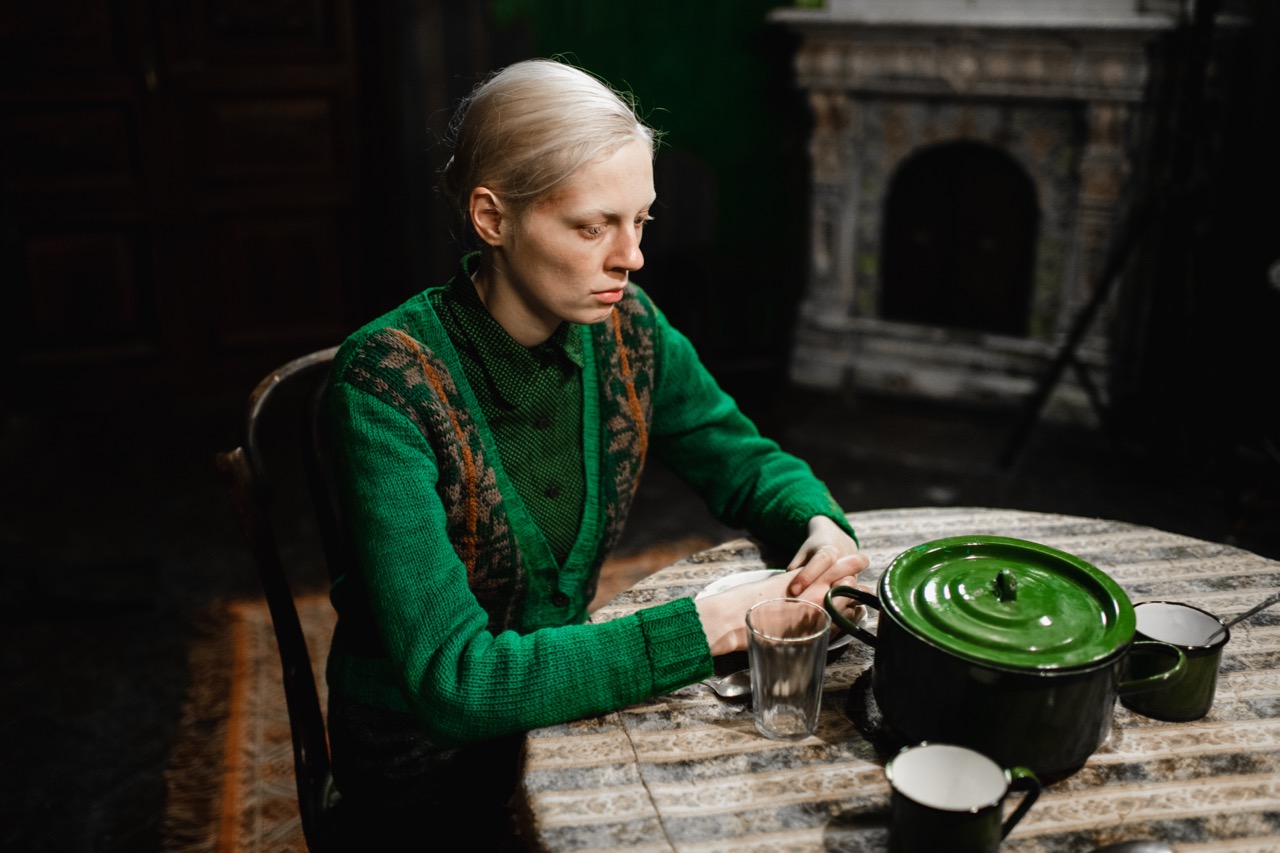 The rest of Beanpole proceeds as a blur of further desperation and deprivation, to the point where the film’s two leads no longer scan as humans but merely as malfunctioning bodies. I don’t mean to churlishly (or stupidly) suggest that a film about those who survived the unfathomable—set in a city that endured one of the longest sieges in history—must gloss over atrocities. But Balagov appears to have too narrowly adhered to this prefatory sentiment from Alexievich in her book: “I think of suffering as the highest form of information, having a direct connection with mystery. With the mystery of life.” Beanpole elides that mystery. After the third or fourth time we witness Iya’s body going rigid or notice a rivulet of crimson trickling from Masha’s nose, it’s difficult to banish the thought that Balagov approaches PTSD with a kind of OCD. (The obsession with superficial re-creation at the expense of the profound is further amplified in the two pages of the press notes that adumbrate minor facts about Beanpole’s production, such as the detail that “authentic newspapers from 1942” were used to plug the holes of the windows in the apartment that Iya and Masha share.) 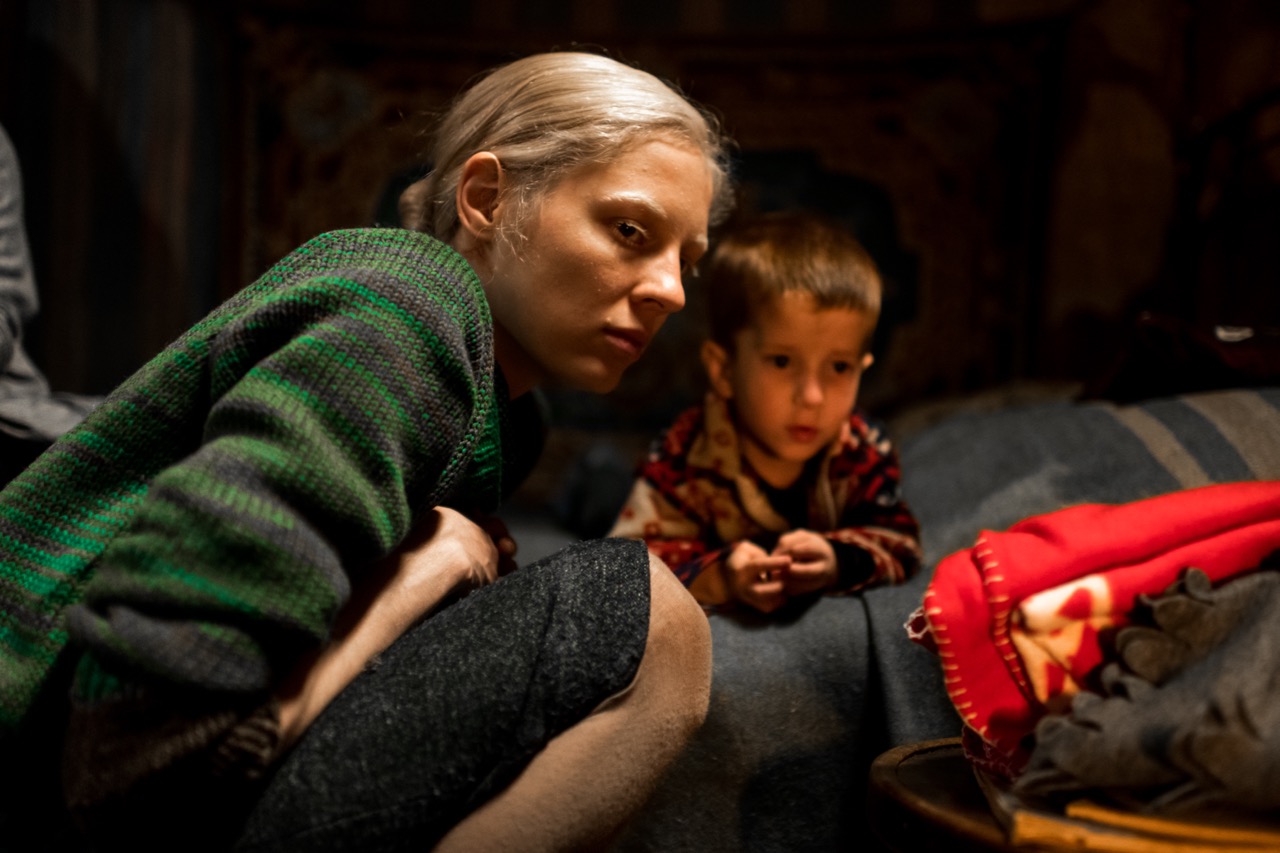 But while Balagov may treat his themes with a heavy hand, Beanpole—his second feature—also evinces his technical acumen. He has a gift for striking, unexpected compositions: a toddler, filmed from behind in a wide shot, entertaining the maimed soldiers with his antics; a camera placed at snout-height as it furiously follows a borzoi, the sleek pooch the property of a Soviet official who will subject Masha to further humiliation. The peeling wallpaper in the protagonists’ flat reveals a sanguineous surface that recalls one of Chaïm Soutine’s startling paintings of beef carcasses. Most indelible of all, though, is the image of Beanpole herself: not even John Currin could concoct a figure as elongated as Miroshnichenko, whose enormous eyes and offbeat affect pleasingly bring to mind Shelley Duvall in her ’70s films with Robert Altman. 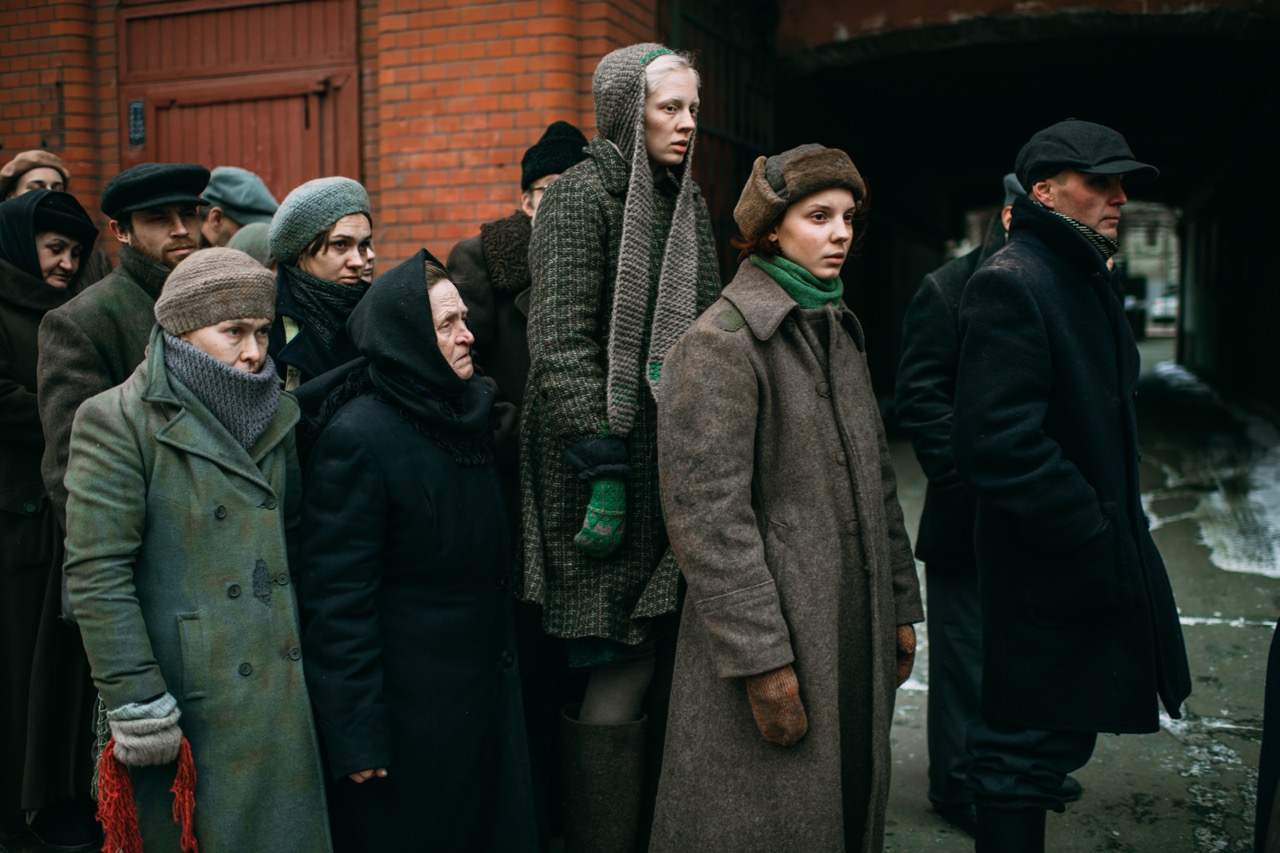 Beanpole marks the screen debuts of both Miroshnichenko and Perelygina. (Like their director, they are under thirty.) The latter, burdened with having to perform the overused tics of the mentally unstable—a scene in which Masha twirls in a dress inevitably devolves into deranged pirouetting—makes a lesser impression than her costar. Neither actress, though, can escape the impossible bind imposed on them by Balagov, who reduces Iya and Masha to a set of symptoms. Balagov, in thrall to the debased visual motifs of depicting agony, ends up banalizing the women and the era he wishes to honor. Is it possible to do otherwise? While watching Beanpole, I thought often of the films of the German writer-director Christian Petzold, who has deployed more oblique strategies—such as ingeniously revitalizing classic movie genres like noir and the woman’s picture—to more effectively explore twentieth-century devastation, not least the Holocaust, the subject of Phoenix (2014). Beholden to verisimilitude, Balagov, in contrast, has made an empty work of historical—and hysterical—reenactment.