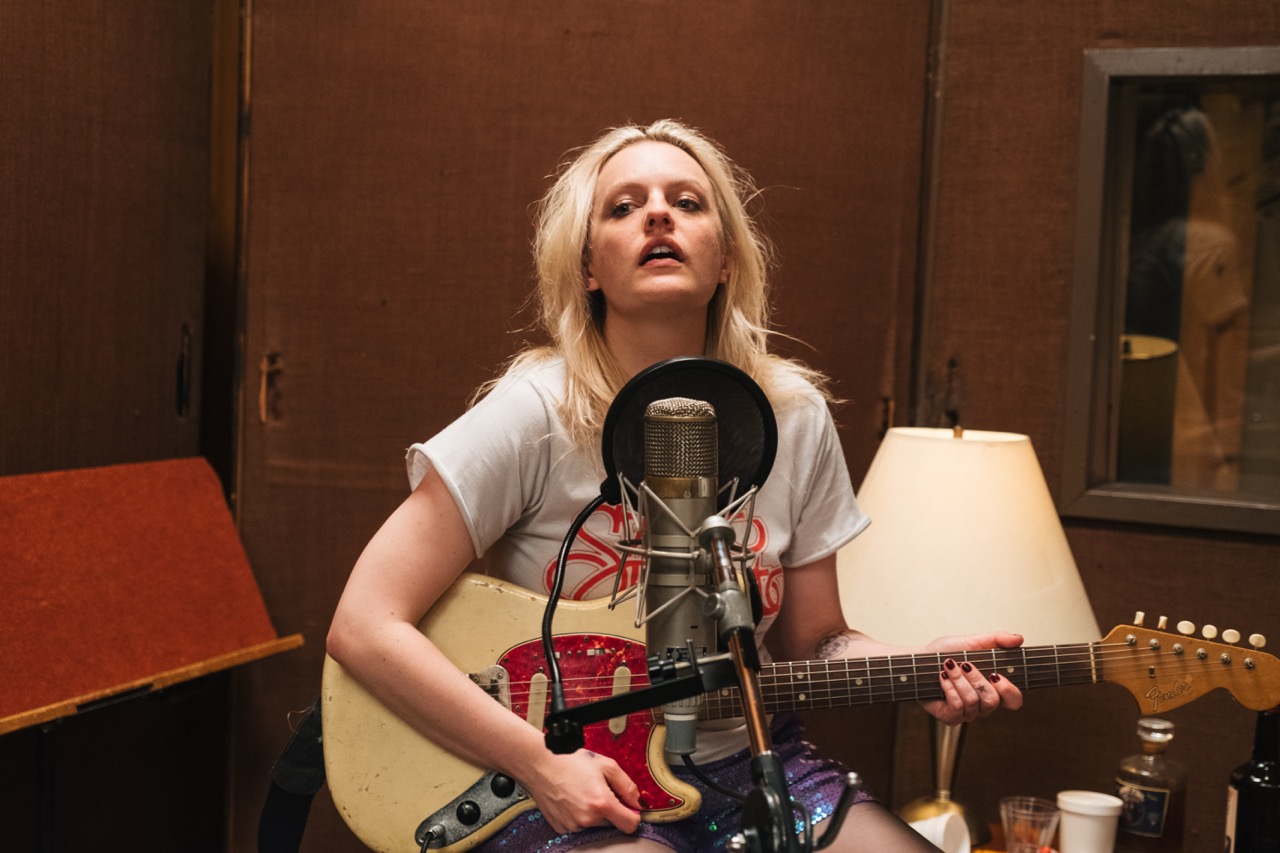 Her Smell, written and directed by Alex Ross Perry

Journey: that vacuous expression assaults us daily, overused especially by mavens of mind-body wellness and publicists and marketers for just about any art form. In his New Yorker online pan of the Björk exhibition at MOMA in 2015, Peter Schjeldahl perfectly articulated the inanity that attaches to the word: “Whenever anything artistic is described as a ‘journey,’ you can be pretty certain of going nowhere.”

It’s also a term favored by raging narcissists like Becky Something, the frontwoman and guitarist of the fictional distaff punk trio Something She, played by Elisabeth Moss in Alex Ross Perry’s Her Smell. “I have an interrupted journey to complete,” she barks backstage early in the film, incensed that a post-show ritual with her shaman was cut short by those asking her to address mundane matters—childcare, tour dates. Movies about self-destructing rock stars, whether based on real idols or centering on wholly invented characters, are often as hackneyed as the j-word itself. But Perry’s pulsating, quicksilver film, boosted by Moss’s jagged magnetism, vivifies the genre. 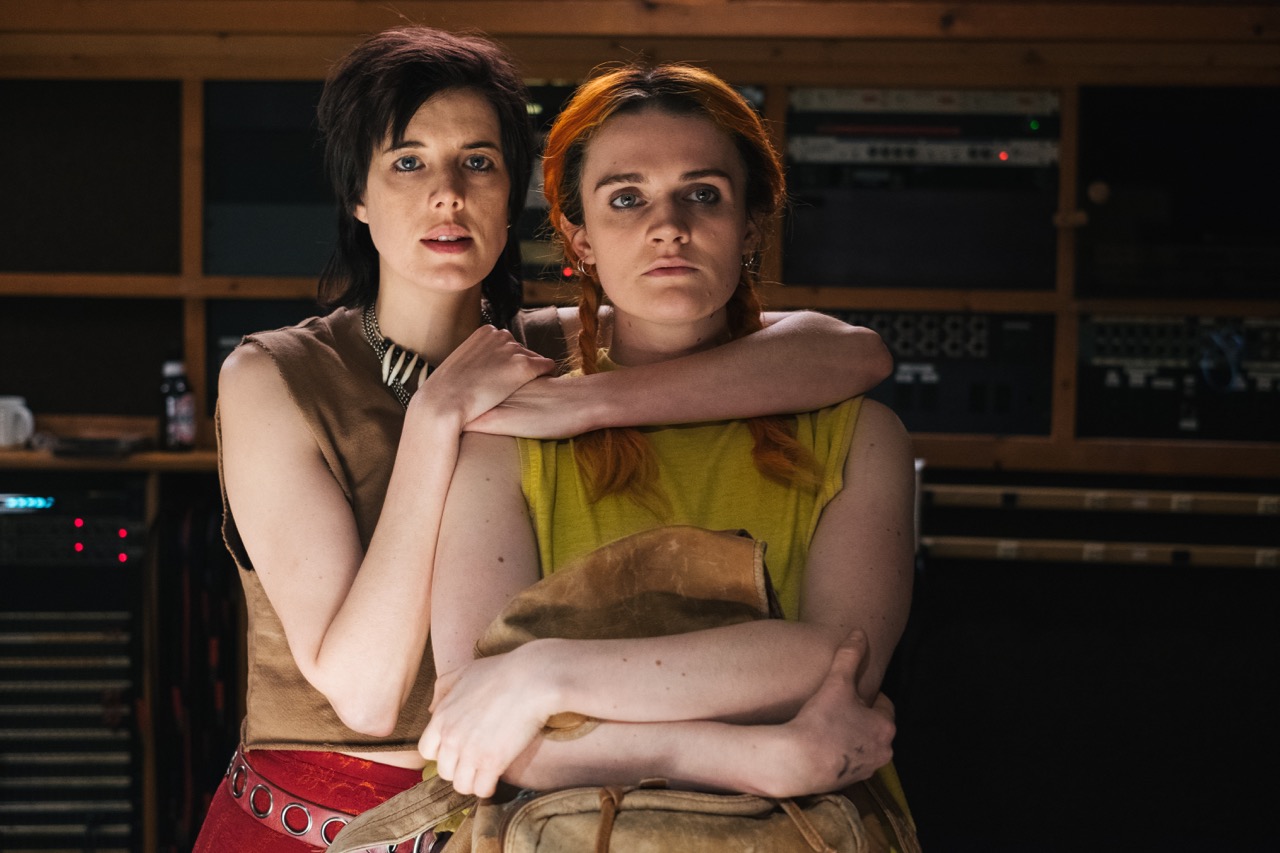 Agyness Deyn as Mari and Gayle Rankin as Ali in Her Smell. Photo: Don Stahl.

Constructed as five acts, Her Smell opens with a bit of grainy video footage that situates us sometime in the early or mid-’90s. Becky and her bandmates—drummer Ali (Gayle Rankin) and bassist Mari (Agyness Deyn)—are mugging for the camera, brandishing the latest copy of Spin, the bygone alt-rock bible, which features them on the cover. “We won! We won! We won!” they chant as they jump up and down, with their arms around one another.

This brief segment, lasting no more than a minute or two, concisely reveals a camaraderie not yet defiled by ego and rancor. In the next scene, the jubilant group cry is replaced by the sounds of fans, mostly young women, shouting for just one person: “Becky! Becky! Becky!” Something She takes the stage and tears into a cover of the Only Ones’ 1978 punk-pop anthem “Another Girl, Another Planet.” But before that blazing rendition kicks into high gear, the song’s morbid first lines—“I always flirt with death / I look ill but I don’t care about it”—are given a funereal flourish by Becky’s whispery, a cappella delivery, as if she’s making a personal confession to the rapt crowd. (She just might be.) During this number, which we hear in its entirety, the band is often filmed in long shot, the better to see, and take pleasure in, Moss, Deyn, and Rankin playing their own instruments and singing/snarling in their own voices. 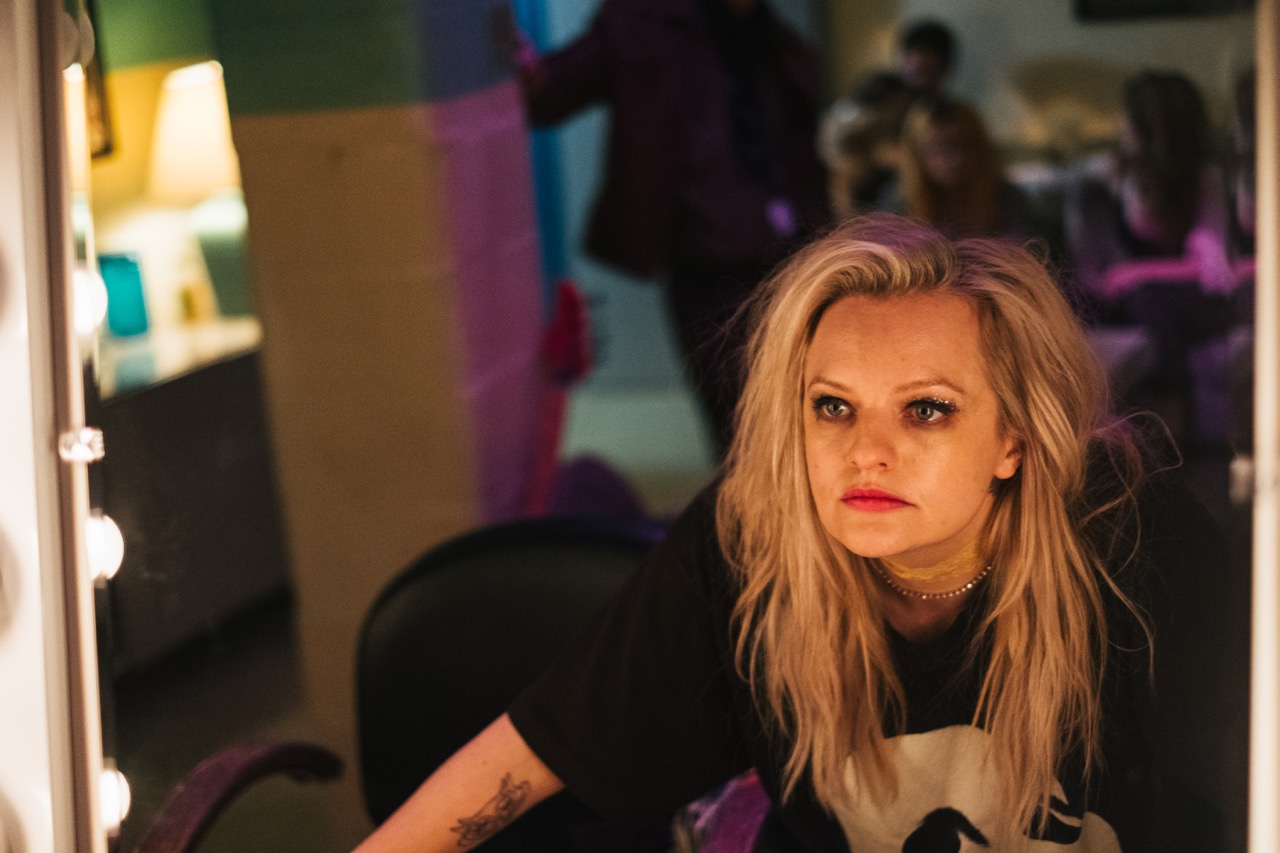 The brio that Becky—née Rebecca Adamczyk—exhibits during this concert curdles into savage self-absorption as soon as she goes backstage. Agitated, needy (for drugs, for more attention), cruel, and spellbindingly voluble (“As you know, I am not myself if I do not visit my other realities”), she lashes out at anyone who enters her dressing room: her band members; her goth-adjacent ex (Dan Stevens) and their infant daughter; the head of Something She’s record company (Eric Stoltz); a glammier labelmate (Amber Heard). 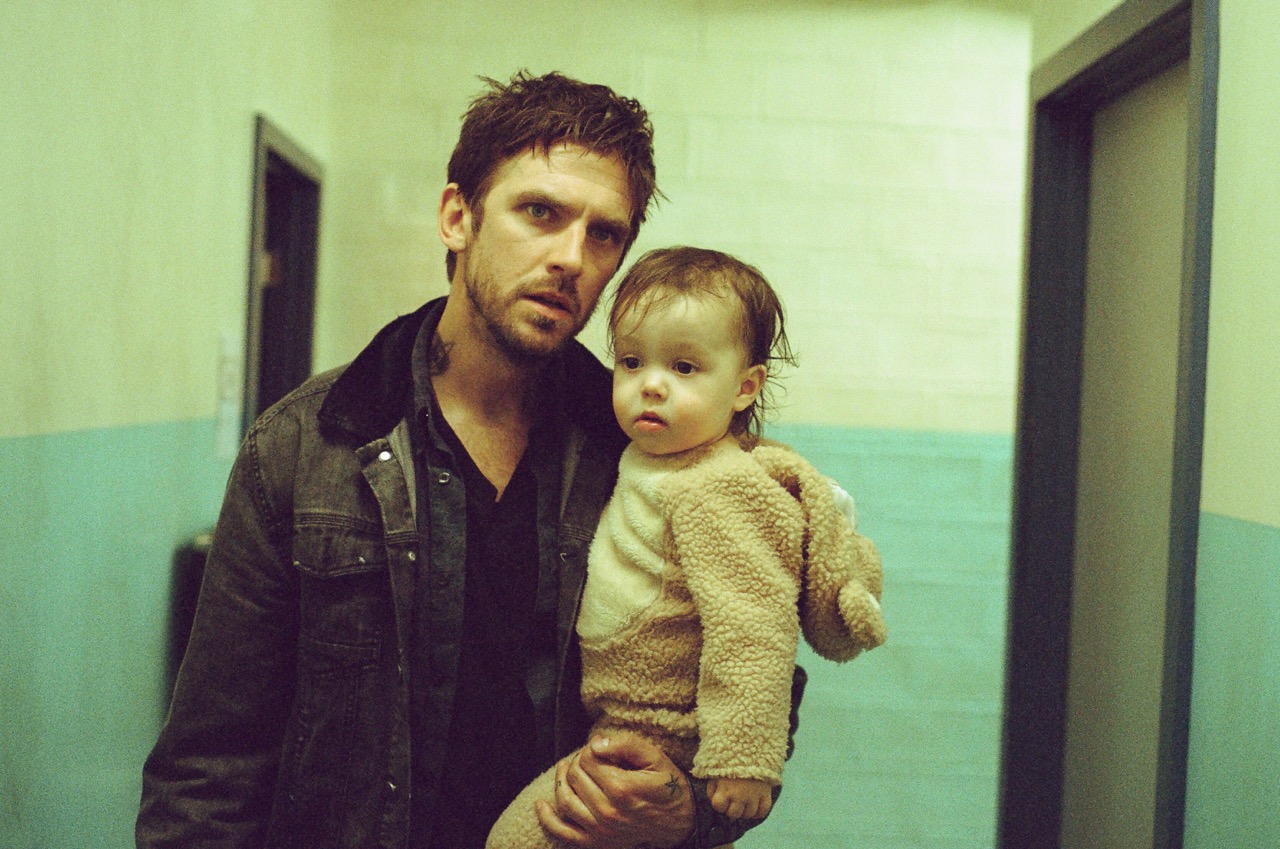 Dan Stevens as Danny in Her Smell. Photo: Don Stahl.

As Becky lurches and lunges in these cramped, dingy warrens, her desperate motion is brilliantly captured by cinematographer Sean Price Williams—Perry’s DP on all six of his features to date—whose kinetic camerawork, often handheld in the backstage episodes, plunges us deeper into the rapidly descending singer’s vicious vortex. (Except for the interstitial Hi8 video segments, which help establish the movie’s discrete chapters, Her Smell was shot on 35mm film.) The score, by Keegan DeWitt, another frequent Perry collaborator, also heightens the disorder: a low, barely perceptible rumble augmented by a screechy fillip that sounds like the misfiring of neurons.

Her Smell stands out, though, as a project that demonstrates the increasingly fruitful creative partnership between the director and his lead performer. This is the third film that Perry and Moss have made together and might be thought of as an oblique follow-up to their prior collaboration, Queen of Earth (2015), another study of a woman coming apart. The earlier move begins, startlingly, with an extreme close-up of Moss’s teary, mascara-streaked face as her character, Catherine, demands of her off-screen boyfriend during a long breakup conversation, “Why are you doing this to me?” However aggrieved she feels or inexorable her mental disintegration, Catherine is never passive—she is alert, spiky, deft at pointing out others’ pitiful acts of dissembling. Moss adds further shades to this complex role by excavating the askew humor in Catherine’s slow slink into madness. 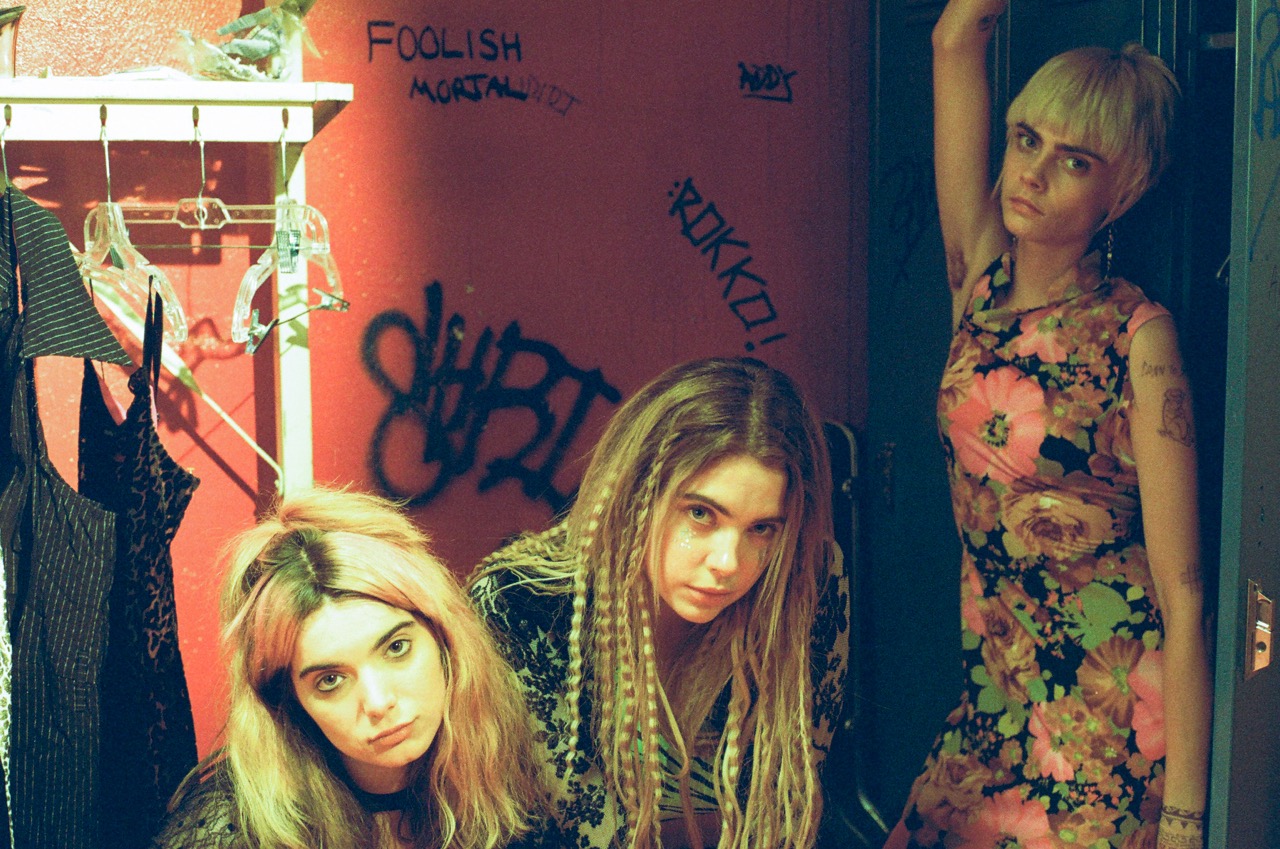 Dylan Gelula, Ashley Benson, and Cara Delevingne as the Akergirls in Her Smell. Photo: Don Stahl.

As the Queen of Noise in Her Smell, Becky, unlike Catherine, isn’t done to but does unto. She careens through backstage hallways and recording studios as a viperous aggressor. She is repellent—and always mesmerizing. Moss revels in her character’s sinister energy: Becky breaks out into macabre smiles whenever she looks into her dressing-room mirror, fiendish grins that immediately recall those of the demonic double the actress plays in Jordan Peele’s recently released Us. Her menace seduces and can even have a touch of the maternal in it, a disarming cluster of signals best evidenced when Becky bites the neck of each member of an ascendant and worshipful power-punk triad called the Akergirls (played, with nicely calibrated shock and awe, by Ashley Benson, Dylan Gelula, and Cara Delevingne). The hostile nuzzle doubles as initiation rite and alpha-female assertion, and precedes the film’s funniest line, Becky’s exhortation to the younger rockers to proceed to the live room of the studio: “Inward, ho!”

Even when Her Smell dramatically changes in mood and tone—as in the penultimate act, which focuses on Becky in near isolation in a bucolic outpost, one year into her sobriety—the film continues to revitalize worn-out notions about reckoning and forgiveness. Some of that is communicated via a surprising choice of song: accompanying herself on the piano, Becky croons “Heaven” to her daughter, now seven, on one of her rare visits, transforming the supremely irritating Bryan Adams soft-rock staple into a humble act of gratitude. Dialogue that would normally land with a thud—such as Mari’s declaration to her currently former bandmate, “You were horrible but it never made me not love you”—here evinces strata of inflamed feelings owing to the fascinating push-and-pull dynamic we’ve watched Moss and Deyn expertly negotiate throughout the movie. Push and pull, back and forth: Her Smell is a journey that takes us somewhere.