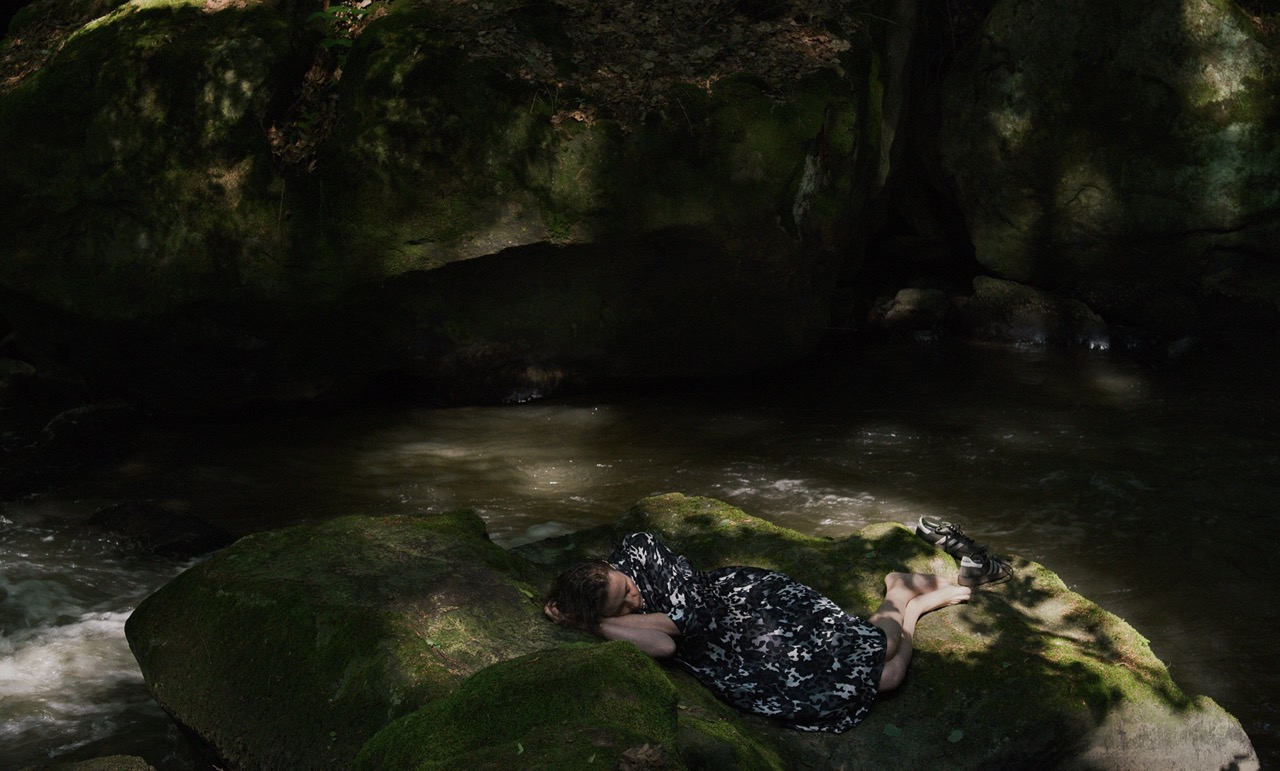 Maren Eggert as Astrid in I Was at Home, But . . . . Image courtesy Cinema Guild.

I Was at Home, But . . ., written and directed by Angela Schanelec, now playing at Film at Lincoln Center, New York City

In our content-glutted era, we are besieged, perhaps benumbed, by densely detailed narratives: procedurals, remakes, reboots, prequels, sequels, etc. The work of the German filmmaker Angela Schanelec offers a bracing alternative to so much crushing plot. Although punctuated by intriguing incident, her movies are defined by enigmas and omissions. Salient specifics regarding backstory are parceled out gradually and sparingly. Characters in her films will spend long stretches of time without speaking or, conversely, engage in bursts of volubility. Time and place never seem fixed. In Marseilles (2004), for instance, we are suddenly uprooted from the eponymous French port town to a busy Berlin street; The Dreamed Path (2016) achronologically covers a thirty-year period in three different countries. Attention must be paid.

Elliptical is the adjective most often deployed to describe Schanelec’s movies, a quality that’s highlighted by the suspension points in I Was at Home, But . . ., her eighth feature to date. The title is an homage to I Was Born, But . . . (1932), Yasujiro Ozu’s poignant comedy about two young brothers who become disillusioned with their father. Like that great Japanese film, Schanelec’s also centers on a family—in this case, Astrid (Maren Eggert), a single, fortyish mother in Berlin; her teenage son, Phillip (Jakob Lassalle); and her grade-school daughter, Flo (Clara Möller). Schanelec creates a subdued, cryptic domestic drama—one denuded of the histrionics typically associated with the genre but one that nevertheless gives a real sense, if only in glimpses, of the burdens and joys of this Schöneberg household. 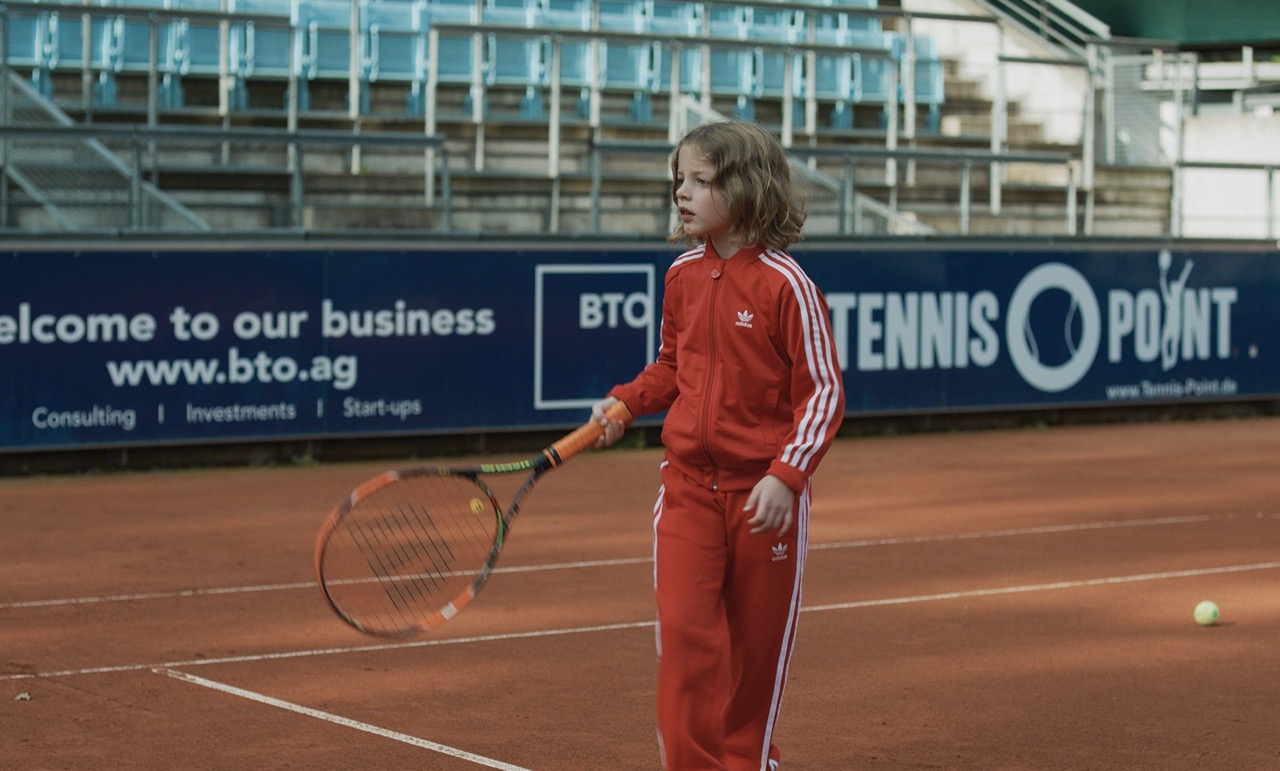 Clara Möller as Flo in I Was at Home, But . . . . Image courtesy Cinema Guild.

But before we are introduced to that ménage, we meet a menagerie. I Was at Home, But . . . opens with a perplexing scene of a dog pursuing a rabbit in a glorious pastoral expanse. The pooch is next seen feasting on its quarry in an abandoned cabin, which a donkey soon enters. By nightfall, the mule and the hound appear to be friendly roommates.

Schanelec doesn’t return to those creatures until the closing seconds. These bizarre bookends, though, aren’t throwaway sequences but rather invitations for the viewer to connect them, however she wishes, to the primary story of Astrid and her brood. Have the two animals in this sylvan shack formed a domestic unit comparable to that of the three humans in a light-filled apartment in the capital city—a household that also includes a dog? And could the beast of burden serve as another of Schanelec’s cine-tributes: to Au hasard Balthazar, Robert Bresson’s sublime 1966 film about a saintly donkey?

Bresson’s influence is deeply—but never distractingly—felt in I Was at Home, But . . . . Famously rejecting acting, the French auteur wanted his nonprofessional performers, whom he called “models,” simply to be, part of his notion of film as pure art form. Although she works with both trained actors (like Eggert, here in her fourth feature with the director) and first-timers, Schanelec shares a similarly elemental approach to filmmaking. In a recent interview, when asked about her “philosophy for the cinema,” Schanelec responded that it was “having the chance to put the camera in a space and having a body in front.” She added, “Filmmaking for me is about thinking about . . . distance to the body, the space the body is in, movement and what movement means.”

This strategy results in arresting compositions in I Was at Home, But . . ., in which the performers—whether central to the film or not, and whether as lone figures or in groups of two or more—become the focal points of strangely beautiful, occasionally estranging tableaux. After the bestial prologue, the camera holds on a little girl in a red toggle coat with a backpack at her side, sitting nearly motionless outside what appears to be a school in early-morning light. Her tranquility and beatific glow contrast with the dirty, blade-thin boy who walks past her and stands stock-still outside the building. This is Phillip, who, as we gradually piece together, had run away a week ago. In the teenager’s wordless reunion with his mother inside an instructor’s office, Astrid, sitting on the floor, clasps her arms around her son’s legs, the rise and fall of her chest as she pants providing the only movement in an otherwise static sequence. 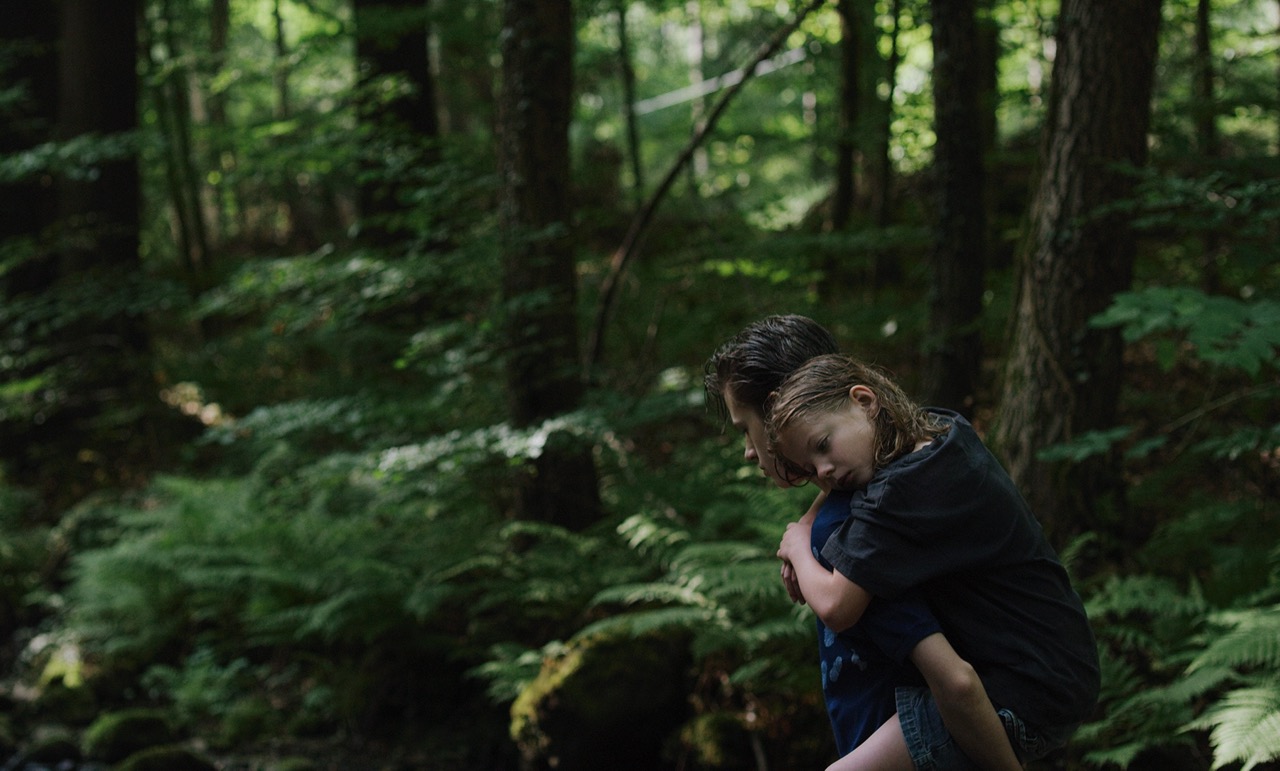 Jakob Lassalle as Phillip and Clara Möller as Flo in I Was at Home, But . . . . Image courtesy Cinema Guild.

The reasons that this presumably gentle adolescent—in one scene Phillip cradles his little sister and softly sings “Moon River” to her—took off are never made clear. His drastic act may have something to do with a crucial bit of information that we learn only halfway through the film: that Astrid’s romantic partner, a theater director and the father of her kids, died two years ago. Astrid’s grief is most explicitly addressed when she lies prone in a small graveyard—an episode that is unfortunately scored to M. Ward’s dopey folk-rock cover of David Bowie’s “Let’s Dance.” That music misfire is the lone infelicity in this spellbinding movie, one that often interrupts the main “action” to include scenes of Phillip and his classmates rehearsing Hamlet; their minimal affect, combined with their gangly tween and teen bodies, paradoxically makes their performances all the more touching. 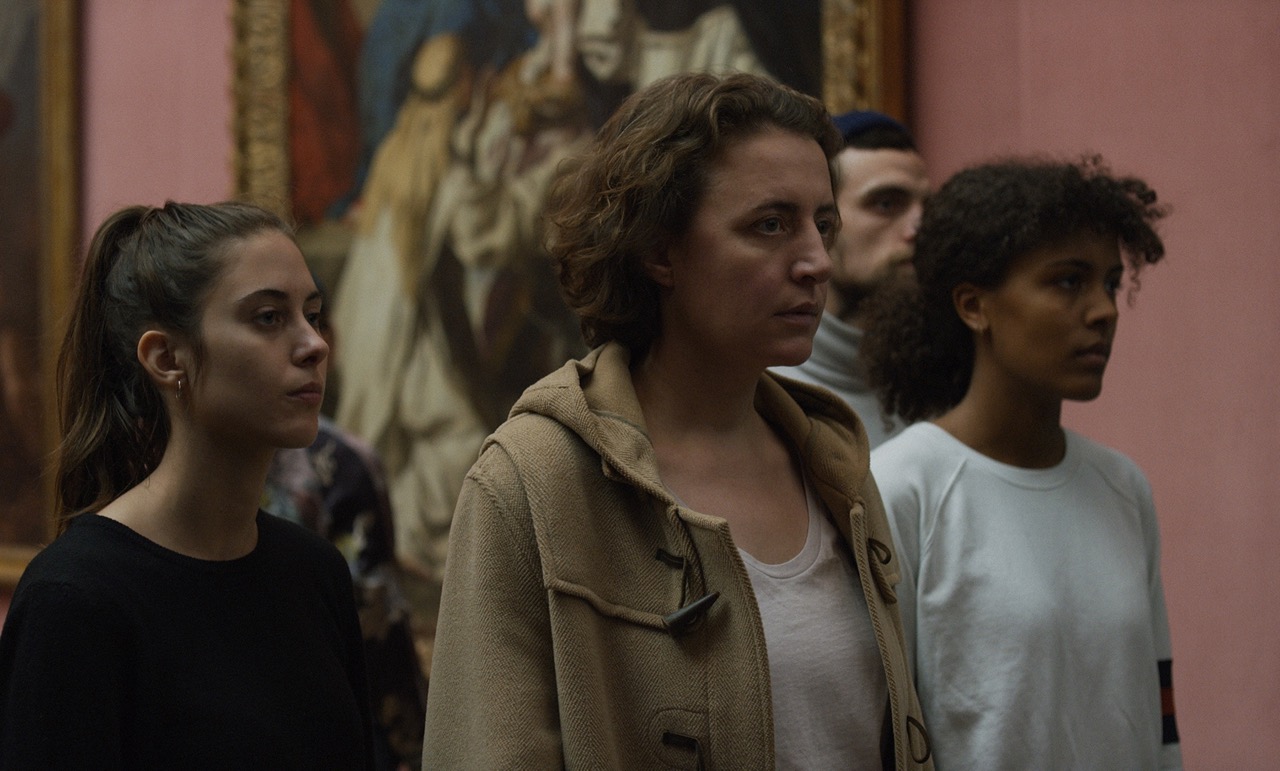 Maren Eggert as Astrid (center) in I Was at Home, But . . . . Image courtesy Cinema Guild.

Although Astrid erupts at her kids once, her emotional states are usually evinced in roundabout ways. During a bravura conversation with a filmmaker who hopes to join the faculty at the arts institution where she works, her criticism of his latest project (“Nothing emerges. They don’t transform”) possibly hints at her own frustration with her life, seemingly held in abeyance. Elsewhere her feelings are more legible, even if conveyed nonverbally. Late in the film, during a trip to a natatorium with Flo, Astrid sits poolside, apparently overcome with anguish; her daughter puts a tiny arm around her, a sequence that mirrors the earlier mute interaction between Astrid and Phillip. 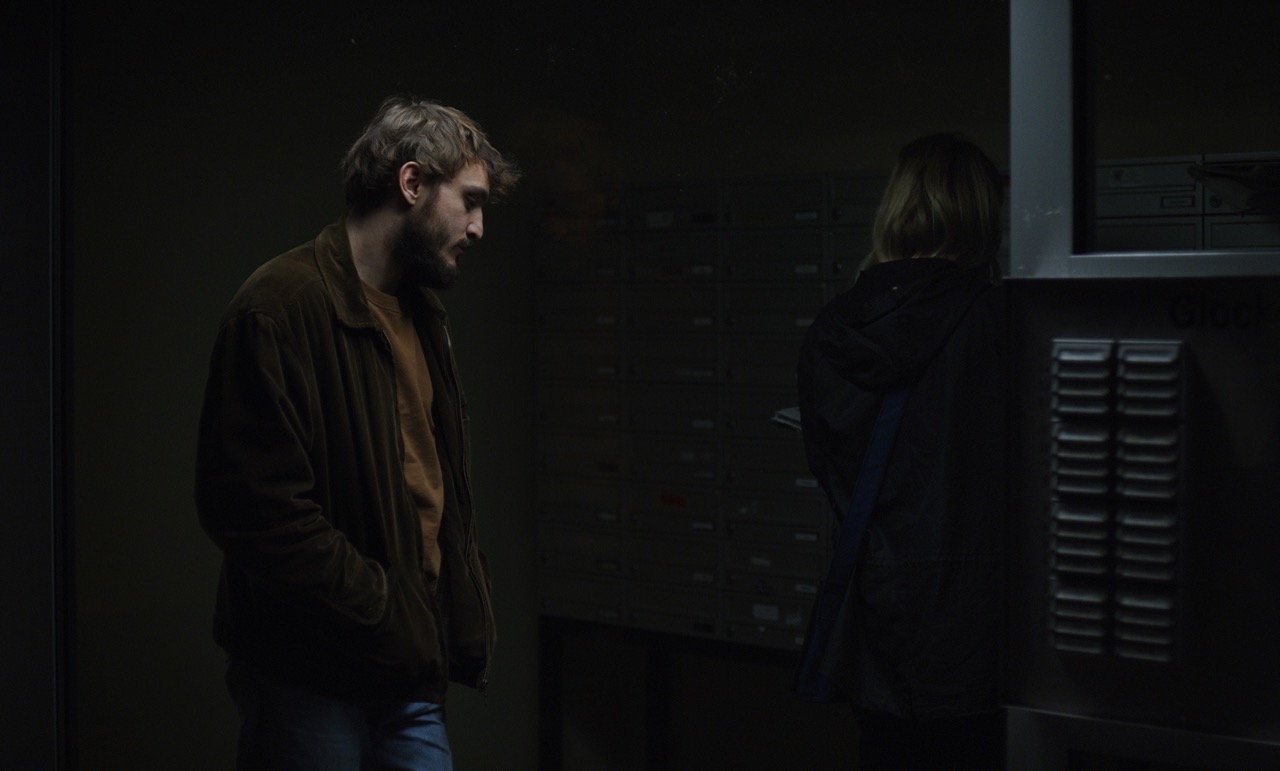 Franz Rogowski as Lars and Lilith Stangenberg as Claudia in I Was at Home, But . . . . Image courtesy Cinema Guild.

This trio consistently elicits our concern and curiosity while remaining ultimately unknowable—balm for the spectator fatigued by overdetermined, overexplained characters. At times Astrid und Kinder cede from the foreground entirely so that Schanelec may focus on the troubled relationship between two people with just the remotest of connections to the principal family: a teacher at Phillip’s school (played by Franz Rogowski, the star of 2018’s Transit by Schanelec’s compatriot Christian Petzold) and his ambivalent girlfriend. Within the stripped-down structure of I Was at Home, But . . . lies a surfeit of feeling. The film boldly demonstrates this gutting observation by Edith Wharton: “Life is the saddest thing there is, next to death.”