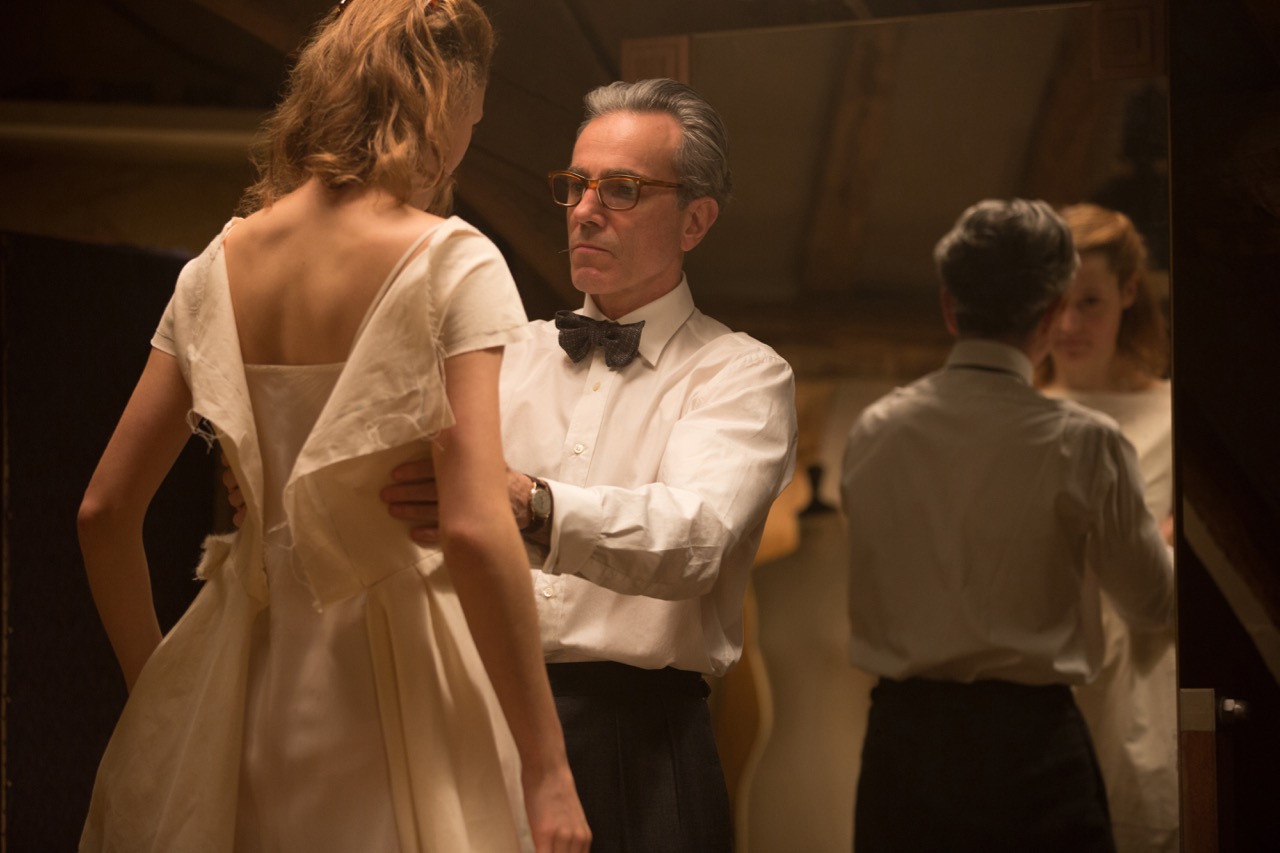 Moody and mesmerizing, Paul Thomas Anderson’s 1950s-set Phantom Thread may be the first of a genre: the haute-couture gothic. The film also serves as a valedictory. Its star, Daniel Day-Lewis—playing a finicky, soigné, difficult British fashion designer named Reynolds Woodcock—has said this will be his final screen performance. If so, it’s a sensational farewell. Day-Lewis imbues his character with cold-blooded charisma; Reynolds is as chilly, exquisite, and potentially lethal as an icicle. “There is an air of quiet death in this house,” he remarks, seemingly unaware that his own fastidiousness and peevishness might be the cause of a slow, steady entombment. Phantom Thread thrills as an invigorating tale of moribundity.

Woodcock: that piquant surname forms a rime riche with Hitchcock, whose great ghost story Rebecca (1940) Anderson’s movie obliquely salutes. As in that foreboding classic, Phantom Thread features an imposing, specter-dusted manse inhabited by what will become, by the end of the film’s first act, a peculiar trio. Manderley, the spooky estate in Rebecca, is here Reynolds’s elegant London townhouse, where he both lives and works with his formidable sister, Cyril (Lesley Manville), who oversees the business and fiercely guards her sibling’s fussbudgetry. She keeps the books, arranges the appointments for fittings for various blue bloods, and gives the ax to her brother’s muses/lovers—those who would dare disturb his breakfast ritual of sketchbook drawing and pots of lapsang tea with their pitiful requests for attention. 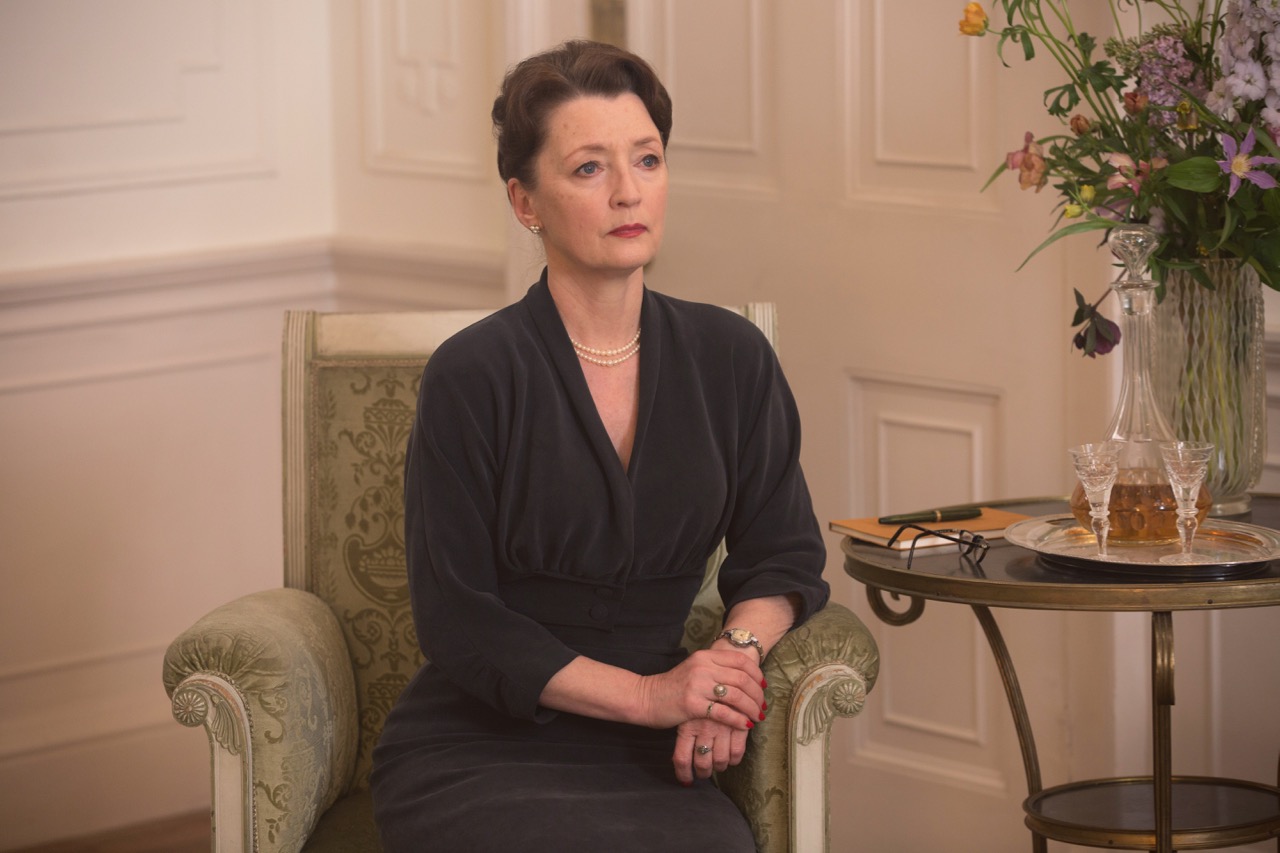 “Morning, my old so-and-so,” Reynolds greets Cyril, that odd pet name emblematic of the depths of affection and loyalty laced with contempt the two have for the other. Each middle-aged and spouseless, they share a queer union. The Reynolds-Cyril bond—reportedly modeled on those between real-life British postwar couturiers Victor Stiebel and Norman Hartnell and their manager sisters—more perversely (and satisfyingly) struck me as the sexless equivalent of the long, brilliant, mad partnership of Yves Saint Laurent and Pierre Bergé, who remained close companions and business associates even after they split as a couple.

Day-Lewis and Manville (perhaps best known for her work with Mike Leigh) pepper this strange dynamic—one between querulous genius and haughty administrator—with viperish decorum. Just beneath Cyril’s every display of solicitude toward her brother lies a stratum of superiority; Reynolds would fall apart without his sibling’s unwavering competence and support, a dependence that breeds a hint of hatred.

Even more fascinating than this odd dyad of blood relations is the folie à deux between Reynolds and the young woman who becomes his latest inamorata and inspiration, Alma (Vicky Krieps), a waitress at a country inn who takes the couturier’s gluttonous breakfast order. (As thin and angular as a wire hanger—on which his garments would never have been draped—Reynolds often announces, and indulges, his enormous appetite.) In her first scene in Phantom Thread, Krieps, the least well-known of the three principals in Anderson’s movie, does something I have never seen a performer do onscreen: she blushes, her cheeks turning rosy after Alma trips and smiles at Reynolds before waiting on him. That wonderful, unexpected entrance is the first of many idiosyncratic gestures and inflections Krieps gives her character; nearly every glance and word from Alma beguiles, puzzles. In a film filled with dazzling, stinging retorts, often delivered, with adamantine elocution, by Reynolds or Cyril, this curious boast from the teashop server to the eminent designer after their first dinner together stands as the most memorable assertion: “If you want to have a staring contest with me, you will lose.” (Though she speaks with a faint Teutonic accent, Alma is never assigned a homeland; the actress playing her is from Luxembourg.) 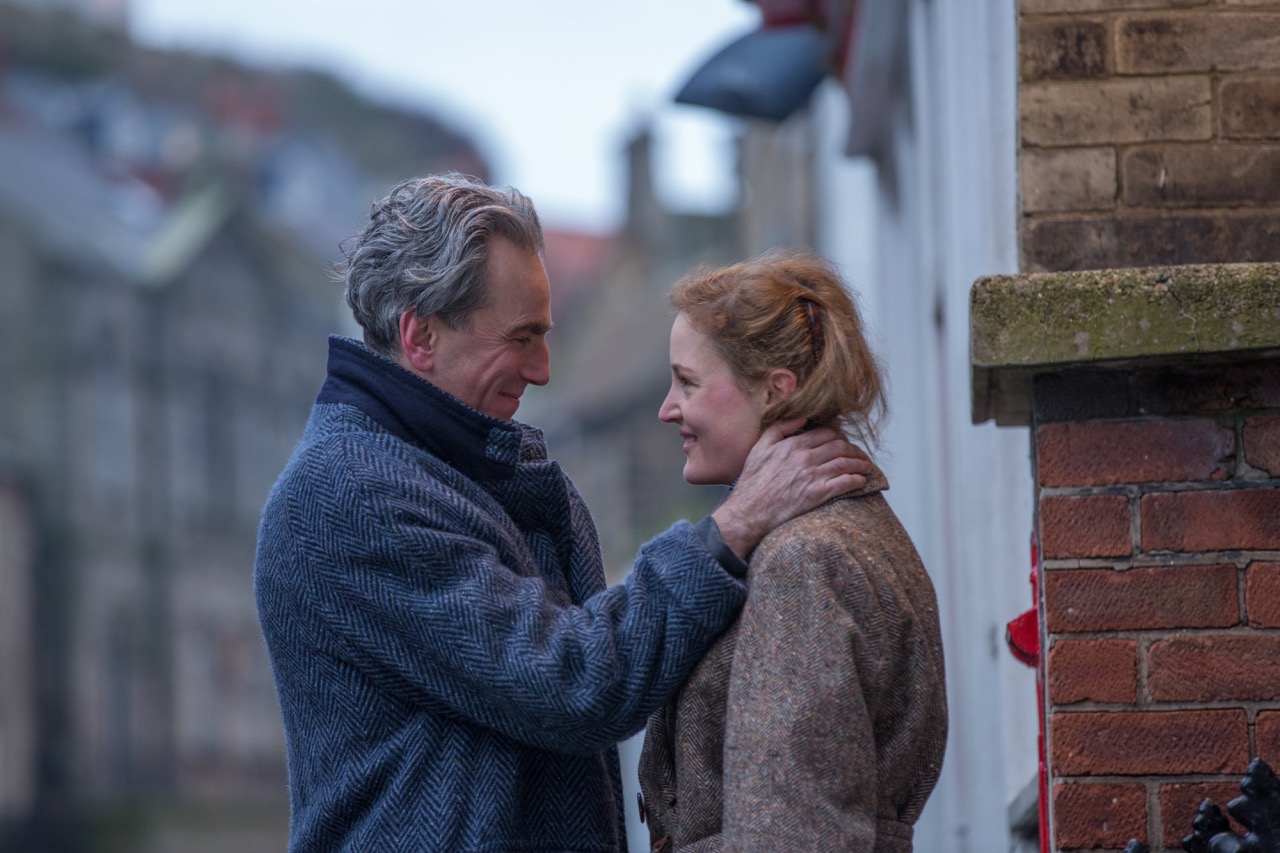 The line is a declaration of independence of sorts. (It is echoed and amplified later in the film, when Cyril says to her brother, “Don’t pick a fight with me. You won’t come out alive.”) Even as Alma—soon to be installed in the Woodcock home, occupying the room right next to Reynolds’s—grows ever more besotted with her debonair but impossible swain, she maintains an ineradicable core of dignity and mettle. She pushes back, and is pushed to extremes.

Her more outlandish actions, though, and Reynolds’s response to them are in keeping with Anderson’s gift for stealthily deranging the expected. The filmmaker’s eighth feature, Phantom Thread is his first to be set outside the US. But Phantom Thread shares with its predecessors, especially those that Anderson has made since There Will Be Blood (2007), his first collaboration with Day-Lewis, an agility in destabilizing familiar storytelling modes and trappings. Like that earlier film—a thunderous historical epic about the American West and greed that deepens and darkens considerably with Day-Lewis’s performance as Daniel Plainview, an oil-prospecting Mephistopheles—Phantom Thread continually torques its own British midcentury grandeur. From scene to scene, the movie fascinates via the tension between opulent, orderly surfaces and roiling psyches.

That defamiliarizing effect is partially achieved by adding an element of the supernatural, a visitation from perhaps the greatest love of Reynolds’s life. The result is also accomplished by the film’s reluctance to lionize the maestro of cut and fabric at its center. “Maybe he is the most demanding man,” Alma says to an interlocutor, during a fireside chat that acts as a quasi–framing device. Reynolds’s actions—the tantrums thrown over toast buttered too loudly, the rage at the smallest break in routine—prove the error of Alma’s equivocal adverb. 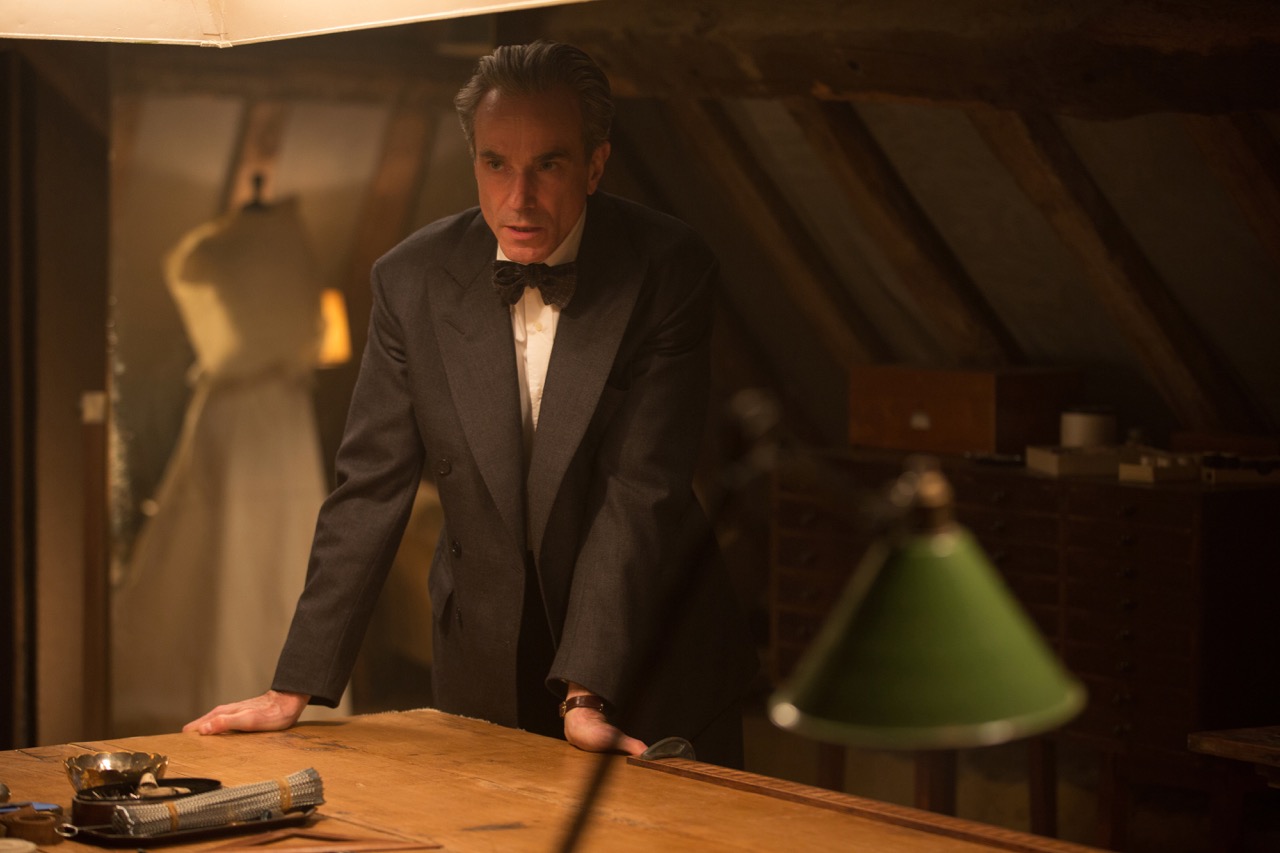 Reynolds’s behavior may be capricious, but Phantom Thread is consistently beautiful to look at: uncredited, Anderson was his own cinematographer, filming on 35mm and impeccably framing each luxe interior, each of the protagonist’s glorious sculptural dresses. (Mark Bridges is the costume designer.) The film is also aurally ravishing; in his fourth project with the director, Radiohead guitarist Jonny Greenwood composes a score that encompasses everything from an opening blast of cochlea-rattling drone to silkiest jazz piano. Mainly, Anderson’s movie is immensely pleasurable to get lost in and, at times, baffled by. Reynolds, as he explains to Alma, carries on a couturier tradition of stitching secret messages into garments. Phantom Thread also has a cryptic quality, refusing to reduce its central enigmas—talent, love, and devotion—to one size fits all.