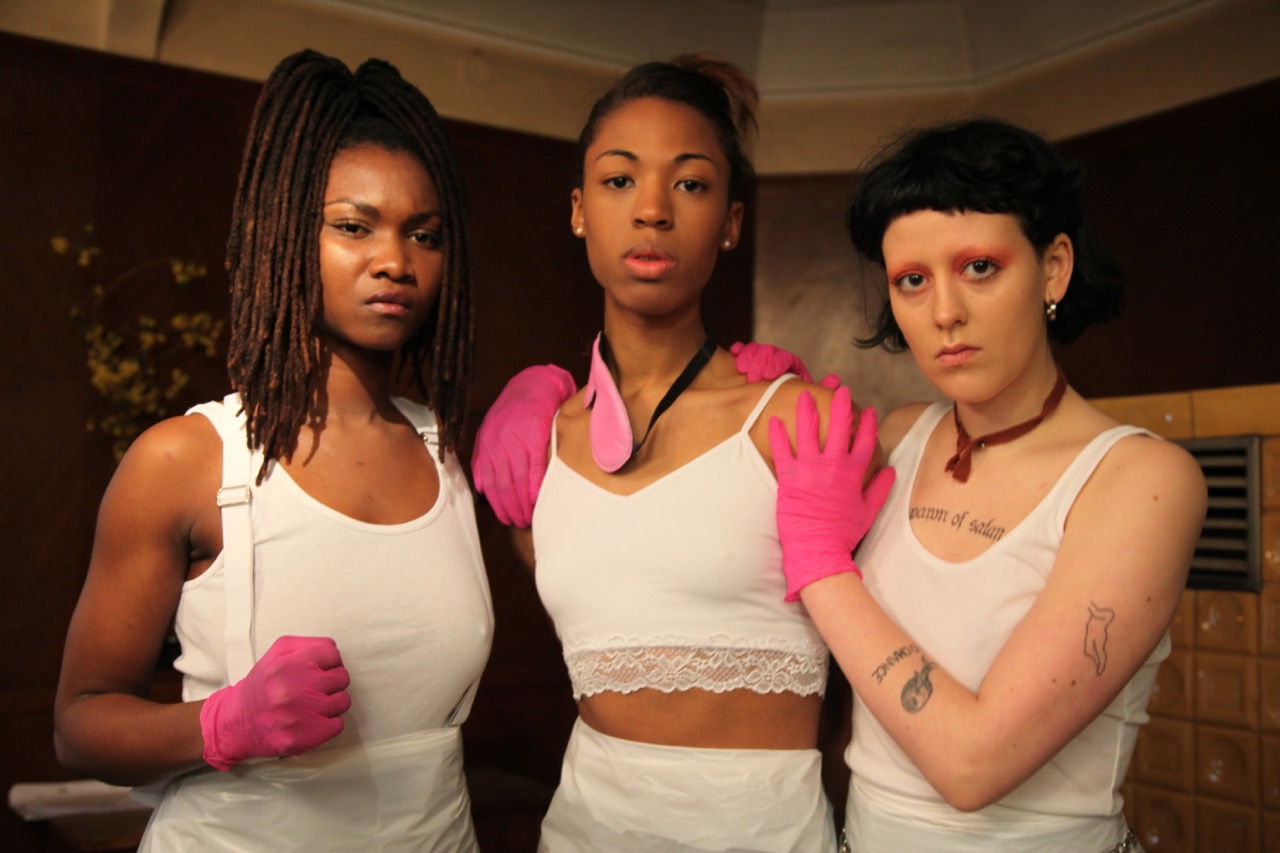 Combining the righteous zeal of ’68 with the carnal fun of 69-ing, several films by the queer punk-porn polemicist Bruce LaBruce hinge on his talent for simultaneously, and hilariously, skewering and celebrating radical chic. The Raspberry Reich (2004), for instance, his far-out saga of fellating freedom fighters, centers on the Marcuse-spouting Gudrun, the leader of a gormless cadre of hunky Red Army Faction aspirants in Berlin. Her call to her followers to ignite “the homosexual intifada” leads to plenty of man-on-man action and more puckish—and, depending on your own political and sexual predilections, unimpeachable—sloganeering: “Heterosexuality is the opiate of the masses!” Inevitably, the Maoist messiah (whose first name is a nod to Gudrun Ensslin, one of the founders of the guerrilla RAF) and her acolytes are revealed to be a bundle of irreconcilable impulses and wild contradictions: with her incorrigible appetite for dong, Gudrun, for one, never practices what she preaches. Just as inexorably, their ultra-leftist platform is repurposed as a niche lifestyle come-on, giving rise to “terrorist nights” at a gay bar. “The revolution,” Gudrun is forced to admit, “has been postponed.”

More than a decade later, and after a dispiriting detour into gay-zombie movies, LaBruce expands on some of the topics dissected in The Raspberry Reich with an oblique sequel, The Misandrists. As terrifically titled as its predecessor (though nearly all the homo auteur’s films are stamped with catchy names), LaBruce’s latest sends up, while also saluting, another extreme doctrine: lesbian separatism. This piquant satire about man-haters evinces a kind of love for their ideology; LaBruce’s ribald cine-tracts are often so funny because he has such deep, exacting knowledge of his targets. 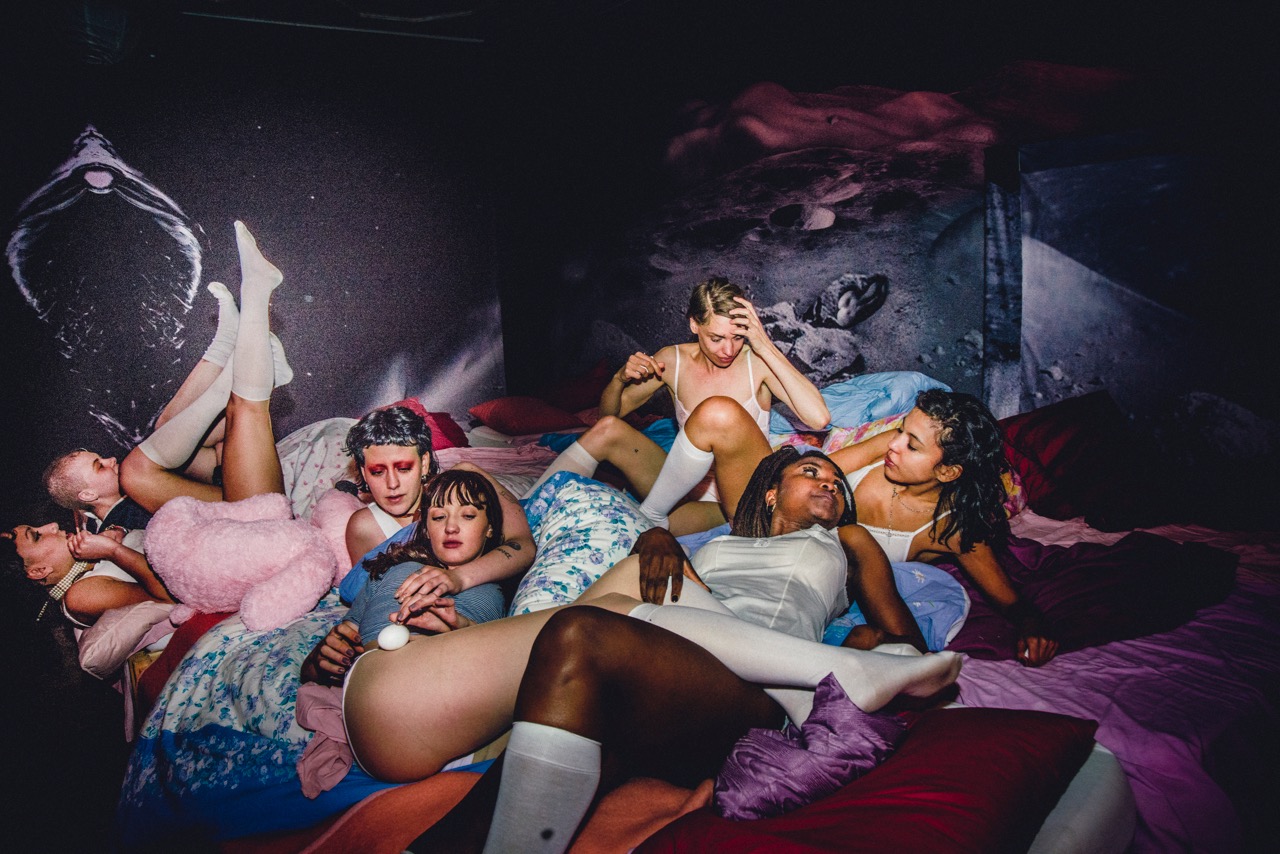 The cast of The Misandrists. Image courtesy Cartilage Films.

Though the sapphically inclined have on occasion figured in LaBruce’s work—notably in Super 8½ (1994), which includes a dyke-porn impresaria among its principals—The Misandrists marks a milestone for the director: it’s the first of his films to consist almost entirely of women, here a gender encompassing a wide variety of expression. The Misandrists is an invigorating alternative not just to the unending cascade of banal queer-themed fare. (My ardor for the film has only increased since enduring Disobedience, starring two A-lister Rachels, Weisz and McAdams, tediously enacting lez lust.) It’s also a stimulant to our impoverished political imaginations. If nothing else, LaBruce’s outlandish scenarios activate thought experiments for those pondering a corrective to our present gynophobic kakistocracy.

Those less inclined toward sedition should still have a good time, provided they get a kick out of gender-reassigning linguistic interventions. An opening intertitle, establishing time and place, sets the tone and prompted my first chuckle: “1999, somewhere in Ger(wo)many.” (Soon to follow are “womanifest,” “womanage,” and “womansplain”; I must indulge in the last verb on that list by pointing out that the coinage, a distaff twist on a term not popularized until more than a decade later, is an easily forgiven anachronism.) Frolicking and smooching in a field are Hilde (Olivia Kundisch) and Isolde (Kita Updike), two young comrades in the Female Liberation Army (FLA), a baker’s dozen of wimmin supremacists led by Big Mother (Susanne Sachsse, who played Gudrun in The Raspberry Reich and once again slays with her insurgent brio). Their petting is interrupted by Volker (Til Schindler), a wounded male Marxist on the lam. Taking pity on a fellow dissident, even one who belongs to the unspeakable sex, Isolde convinces Hilde to help her hide the fugitive in the basement of their separatist stronghold. 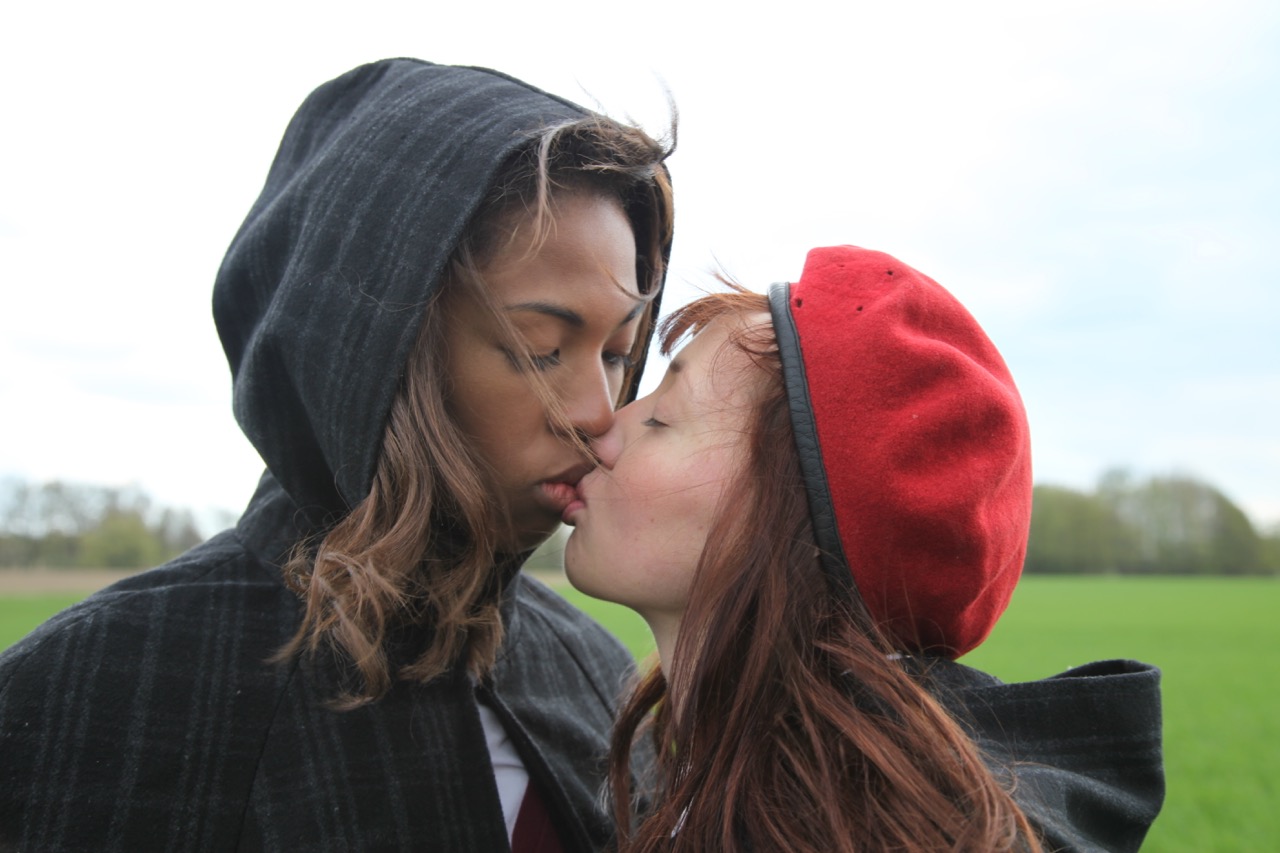 That plot strand is lifted directly from Don Siegel’s The Beguiled (1971), a baroque tale of sexual hysteria. (The Misandrists, which had its festival premiere in February 2017, preceded Sofia Coppola’s decorous, high-profile remake of that swampy Southern gothic by three months.) A key component of LaBruce’s lavender agitprop is his unerring, wide-ranging cine-poaching. Just as The Raspberry Reich quoted Godard’s La Chinoise (1967) and Dušan Makavejev’s WR: Mysteries of the Organism (1971), among other titles, to advance its homosexual agenda, The Misandrists pays homage to a variety of films, spanning decades, nations, and traditions, to make the case for a no-man’s-land: Zero for Conduct (1933), Jean Vigo’s tale of boarding-school anarchists; Therese and Isabelle (1968), Radley Metzger’s soft-core rendition of Violette Leduc’s anguished memories of adolescent girl-on-girl action; In the Realm of the Senses (1976), Nagisa Oshima’s landmark of erotic extremes. 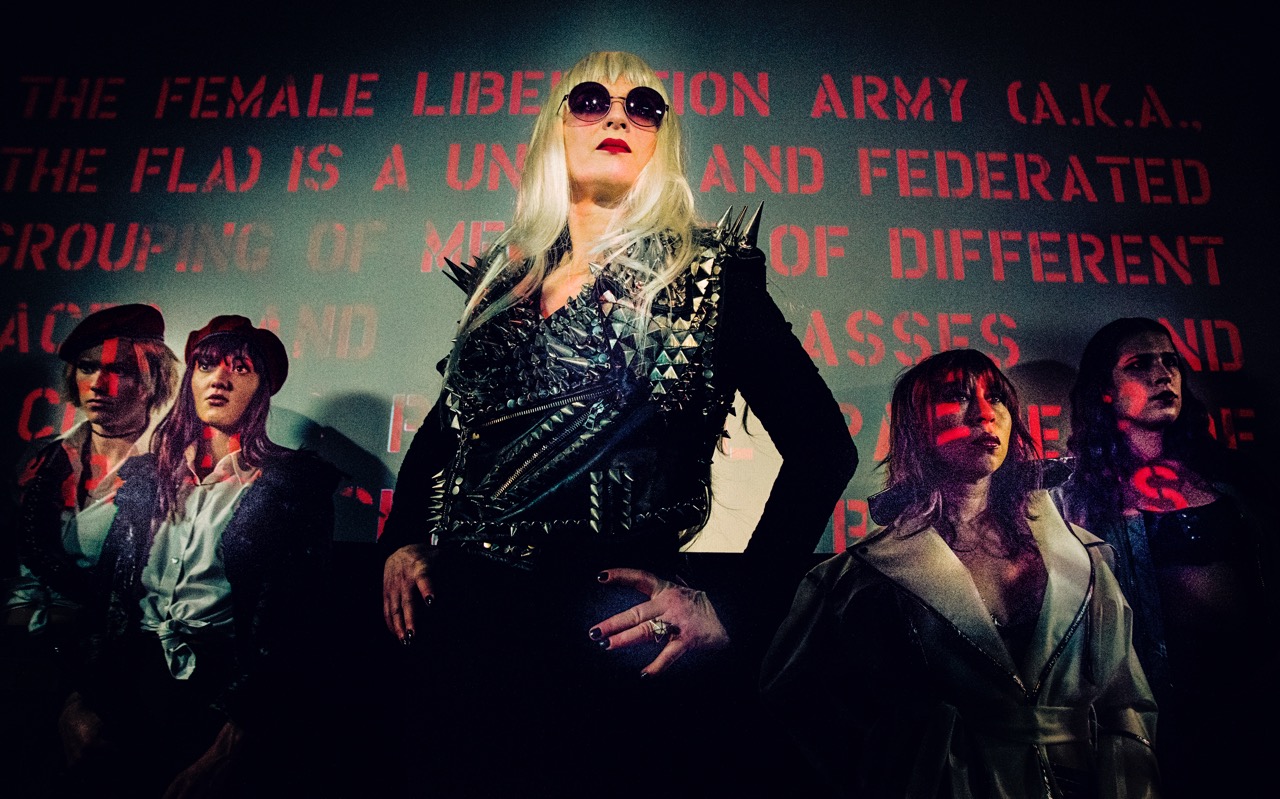 But the texts that LaBruce seems most fluent in, and thus able to exalt and lampoon with equal precision, are the various idioms that dominated certain strains of second-wave feminism. A great bit features Sister Barbara (Caprice Crawford), another of Big Mother’s adjutants, launching into a Gaia-infused, spoken-word-poetry-cadenced discourse on the superior gender’s elemental characteristics: “A woman is a fever that never subsides. . . . She is luna, and she is lacuna.” 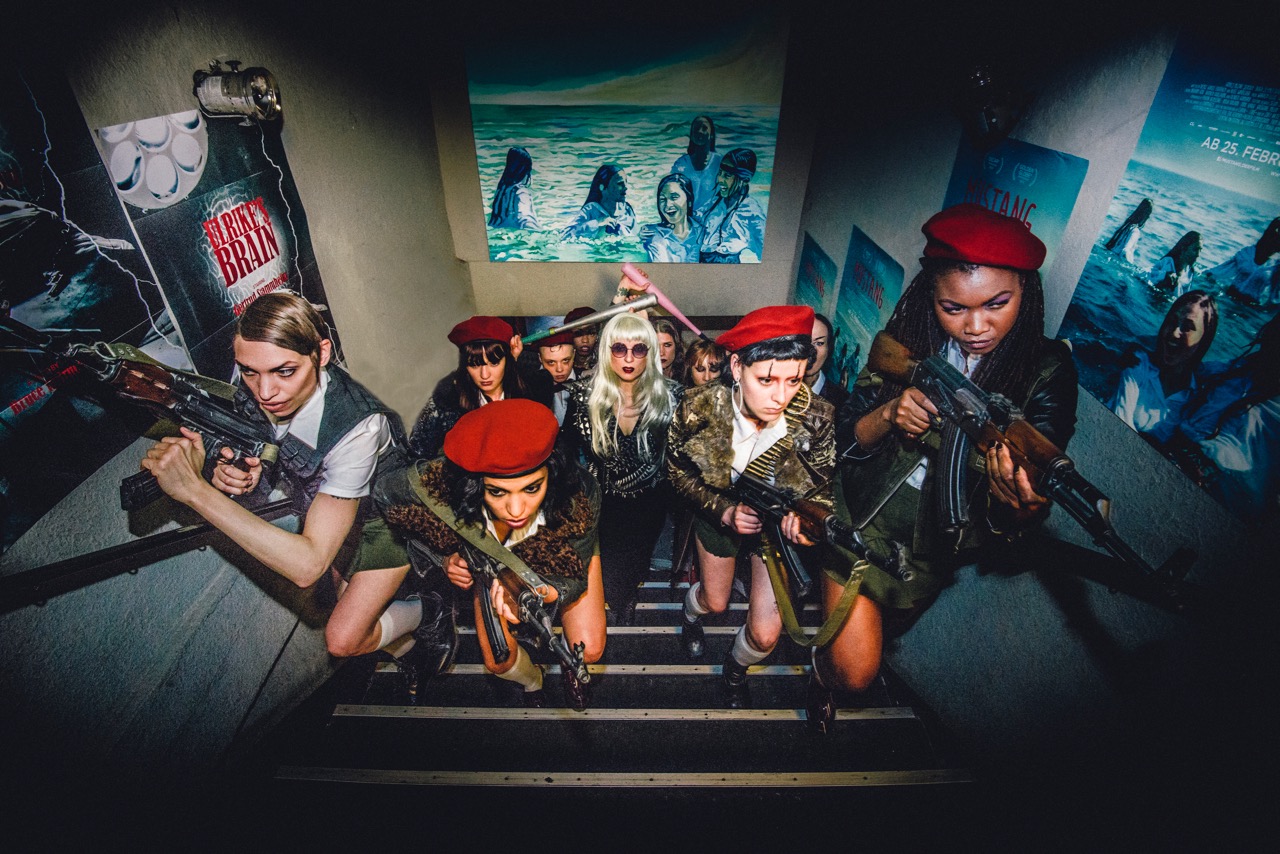 The cast of The Misandrists. Image courtesy Cartilage Films.

The goddess-y jibber-jabber may be giddily burlesqued, but other aspects of the FLA’s essentialist praxis are scrutinized more seriously. Specifically, The Misandrists excavates the turf of TERFs—trans-exclusionary radical feminists—effectively pointing out the narrowness of a movement that defines “woman” solely as those born with vaginas. “I believe that I am a woman as I am,” pleads an FLA enlistee on the verge of being exiled for having the “incorrect” anatomy. Her claim broadens closed minds, both those of her sister-warriors and that of the recuperating male captive in the cellar. This time, the revolution isn’t postponed but fully achieved. Roughly every other line in LaBruce’s riotous, exhilarating movie deserves to be hashtagged in perpetuity, but here’s hoping this FLA cri de guerre has a life beyond social media: Freedom for female people!