Nonfiction
The Internet Is Not What You Think It Is 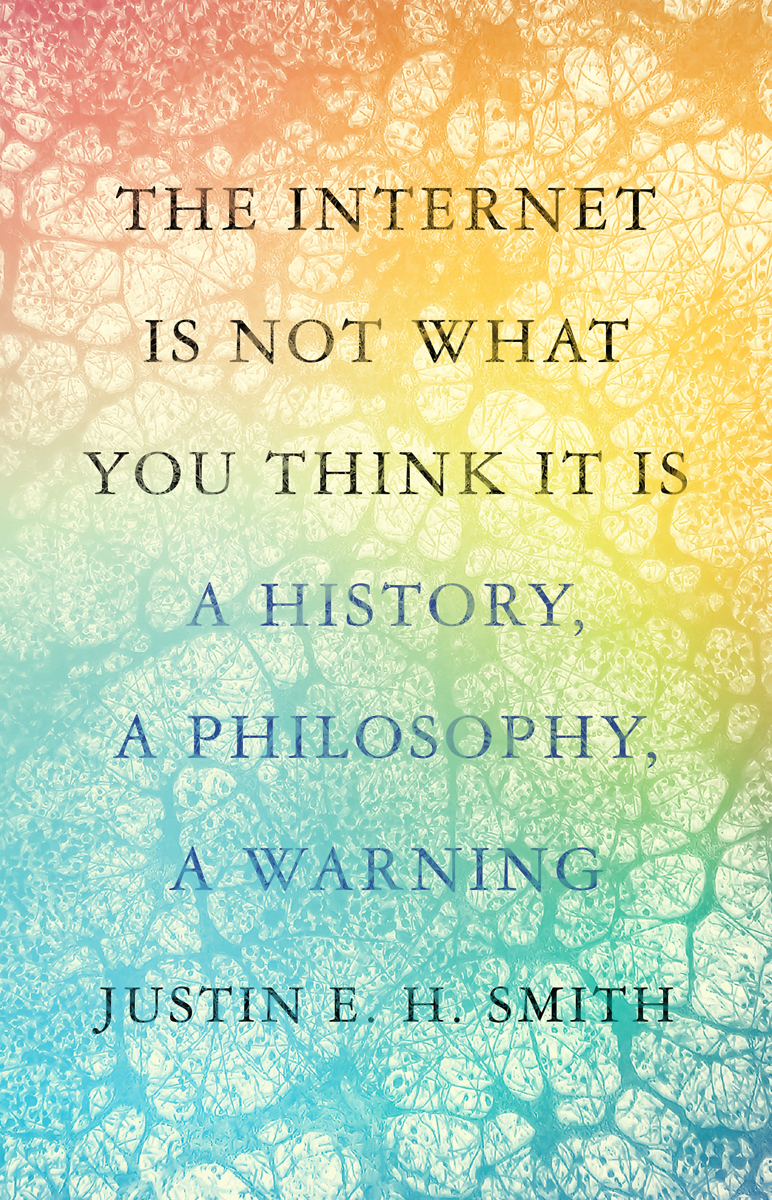 The Internet Is Not What You Think It Is:
A History, A Philosophy, A Warning, by Justin E. H. Smith,
Princeton University Press, 194 pages, $24.95

When did it become as hard to imagine what a good—or at least not as bad—internet might look like as to picture a world without the internet at all? Social-media mobs, conspiratorial thinking, deadly disinformation campaigns, gadget addiction, the funk of mass attention-deficit disorder: World-Wide-Web woes comprise a growth economy. The less acute but vague unease of our encounter with digital technology isn’t much alleviated by the possibility of imagining a truly off-the-grid alternative. (That a bit of shorthand like “off the grid” exists to describe a break from tech is as much a symptom of the problem as anything.) Perhaps to say that we feel backed into a corner by a claque of devices of our own making is not really to say much of anything at all.

To a degree, the circularity of this empty prognosis is what Justin E. H. Smith signals at the tail end of the subtitle to his brisk exercise in media genealogy The Internet Is Not What You Think It Is: A Philosophy, a History, a Warning. Smith’s book was written in the midst of the COVID shutdown, that is, as the latest model (“hybrid”) of mediated identity (Zoom meets social isolation) was giving a sharp edge to our particular sense of being boxed in by the times. (Was this the destiny tech always intended for us?) He is keen to land on the right analogical experience for how that moment felt as he sat marooned in front of his computer, alighting both on the intellectual exile exemplified by Erich Auerbach’s 1946 Mimesis (“a book about the absence of books”) and the consoling capaciousness offered by Robert Burton’s 1621 Anatomy of Melancholy, a work that lets the world into its author’s cloistered nook like the busy harbor glimpsed in the windowpane in a Dutch still-life painting. When we talk about “the world” presented through our monitors, what is it precisely that we are doing? Or better, what are we saying? Among other things, what we are doing is turning to metaphor to connect the experience of looking at these sets of open browsers with the solacing vision of Burton’s encyclopedic masterpiece. From “screen” to “virus” to “meme,” the internet—or our way of understanding it, at least—churns out metaphors in overdrive. Smith wants us to be attuned to the fact that metaphor and analogy-making are not mere fictions; rather, they constitute a distinct way of speaking, and thinking, one that carries its own logic, textuality, projection, and pedigree. If we are to say anything of great substance about the internet, it doesn’t hurt to have philology on our side.

Little of what we ascribe to the experience of the internet is genuinely novel. Smith outlines what he considers a true departure with the birth of a new sort of extraction economy driven not by natural resources but by the “countless little nibbles of individual human attention” that feed it. This emerging extractive economy is a true threat to how we make use of attention, and never before has so much of what we do—our pleasures, our jobs, our daily correspondence, our dirtiest secrets—been concentrated in “a single device . . . a portal for the conduct of nearly every kind of human life today.” This condensation only intensifies the effects of attention extraction. Put these factors together and you end up with a new model of subjectivity, where “human beings are increasingly perceived and understood as sets of data points; and eventually it is inevitable that this perception cycles back and becomes the self-perception of human subjects.” You may or may not care deeply about algorithm creep, but it cares deeply for you. There are certainly worse social compacts, but this one is fairly lousy, and the shallow model of human behavior it generates—and which cycles back to animate plenty of question-begging tech cant—contributes to transforming “human identity into a sort of imitation of the decidedly non-human forces that sustain the internet.”

Revolutions transvalue everything, as Lenin taught. Media revolutions are no different. Still, the question remains what sort of media revolution we find ourselves in. The title of Smith’s book is ungainly but cunning in asking not what the internet is but what it isn’t, pushing against our certainties about its very nature. For all the jeremiads, this is a book of nots. The internet age is still in its infancy, and forms of engagement may yet appear that reconfigure how we interact with our digital selves and the mediated world. If we feel that information overload is at the root of our sapped capacities for attention, Smith is quick to note that the same crisis of attention was sounded in the century and a half following Gutenberg’s innovation in printing technology.

But more crucially, the question of undoing our certainties asks us to historicize the coming of the internet in the broadest way, one that opens up to a durable set of questions around thinking machines and the nature of intelligence that have engaged thought leaders for centuries. Most formidably, it leads us back to Leibniz, the inventor of the “reckoning machine” (a forward-looking calculating instrument) and a philosopher animated by the question of how the line is drawn between the artificial and the natural. It opens the Kunstkammer doors to explore machines that promised to approximate life or do our thinking for us: the nineteenth-century “ideoscope,” the eighteenth-century “defecating duck” (an inspired bit of quackery, it must be said). Smith parrots the tech phrase “proof of concept” by gently insinuating that so many phenomena we think of as sharing the time signature of the digital age—from “simultaneity” to “virtuality”—existed in both practice and fantasy well before the birth of the bot.

One of the pleasures of Smith’s philosophical tour is to note how frequently the implementation of ideas and their consequences jump domains. The pioneering work of Ada Lovelace and Charles Babbage in applied algorithms, in the 1800s, drew heavily on the revolutionary Jacquard loom that automated textile production through the use of proto-punch cards (and put skilled weavers out of a job). An advocate of “poetical science,” the now justly celebrated Lovelace grasped the implications of the duo’s prescient Analytical Engine, writing that it made possible for the first time in human history the reproduction of truly “abstract mental processes of the most abstract branch of mathematics.” She envisioned it might even aspire to compose music. The enthusiasm for outsourcing thought, the dream of a machine that might transcend itself, the passionate claim of utter novelty for an invention that imbricates history in complicated ways: Lovelace was ahead of her times in more ways than one. Like her father Lord Byron, she died young in an era of great optimism. The vision that inspired Lovelace has become much more complex as its implications have disclosed themselves. One of the great achievements of Smith’s book is to permit us to honor her legacy, ambition, and achievement—and that of many others both before and after her—while buttressing a healthy and necessary skepticism toward the claims of tech transcendence and the uniqueness of our moment.