Visual Art
We Wanted a Revolution 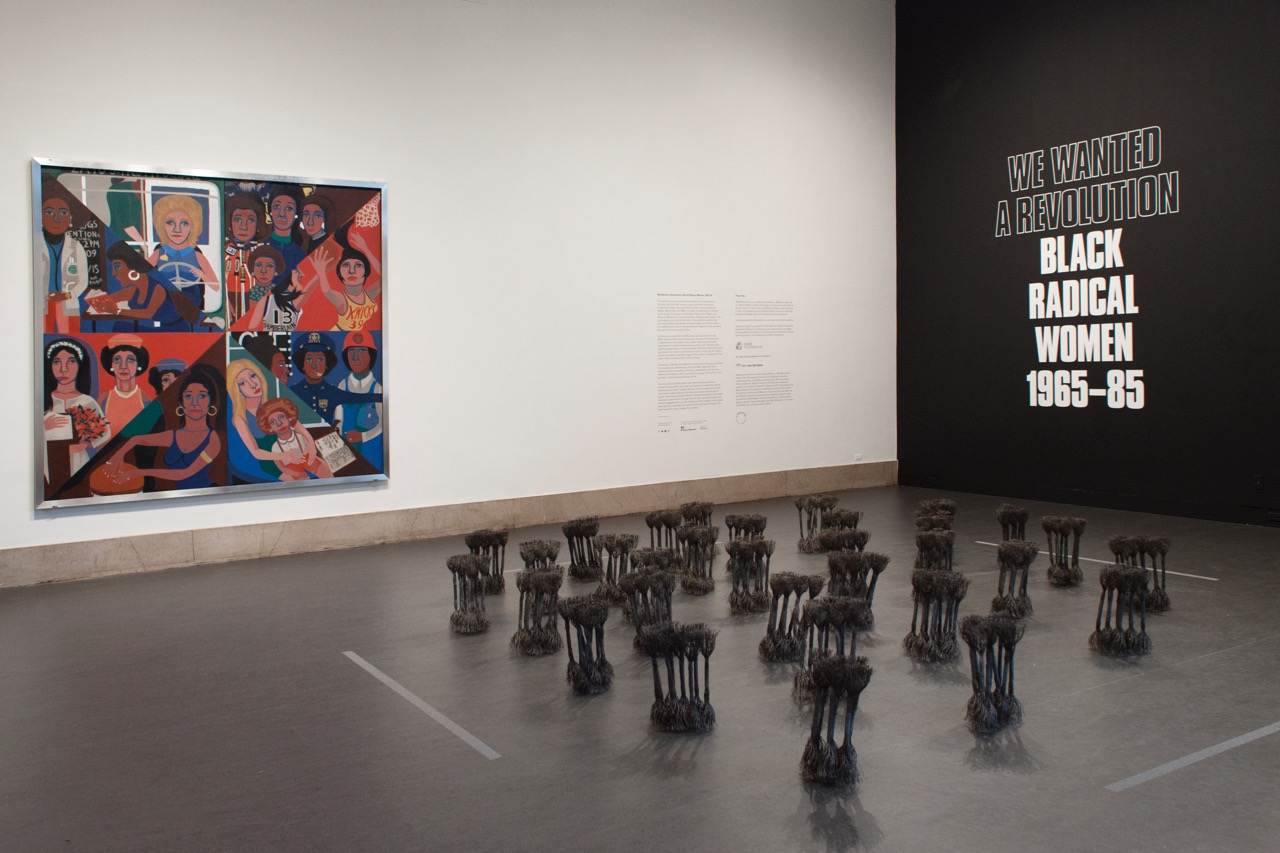 The Brooklyn Museum’s We Wanted a Revolution: Black Radical Women, 1965–85 gathers together artworks and ephemera by Black women working in collective art contexts “during the emergence of second-wave feminism.” Though this emergence provides a temporal frame, an introductory wall text notes that some of the artists included in the show do not use the term “feminist” to define themselves or their work, because it has primarily been associated with the struggles of white women. This admission points to a larger institutional dynamic in which Black women tend to arrive in any canon as a supplement to a history whose form has already been sketched out without them.

But this show attempts to propose a specific history, beginning with the first and only exhibition by the Black art collective Spiral in 1965. We Wanted a Revolution understands itself as a corrective to the canon’s race/gender problem through the assertion of a counter-canon. An accompanying one-day symposium showcased warm and collegiate discussions between older artists, who lived in communities built around not only shared artistic ambitions but also practical matters such as childcare, community organizing, and so on. A dress by Jae Jarrell is exhibited on a mannequin alongside a photograph of Jarrell herself wearing the work, accompanied by her young children. Dindga McCannon’s vivid painting Revolutionary Sister (1971) portrays a young Black woman resembling the Statue of Liberty, her head hinged at the neck because, McCannon has explained, that made it easier to fit the painting into friends’ cars or carry it on the subway. The work evokes a parallel, fantastical version of the American symbolic order in which Black women are given due respect for their singular work on the question of what liberation has meant and could mean. 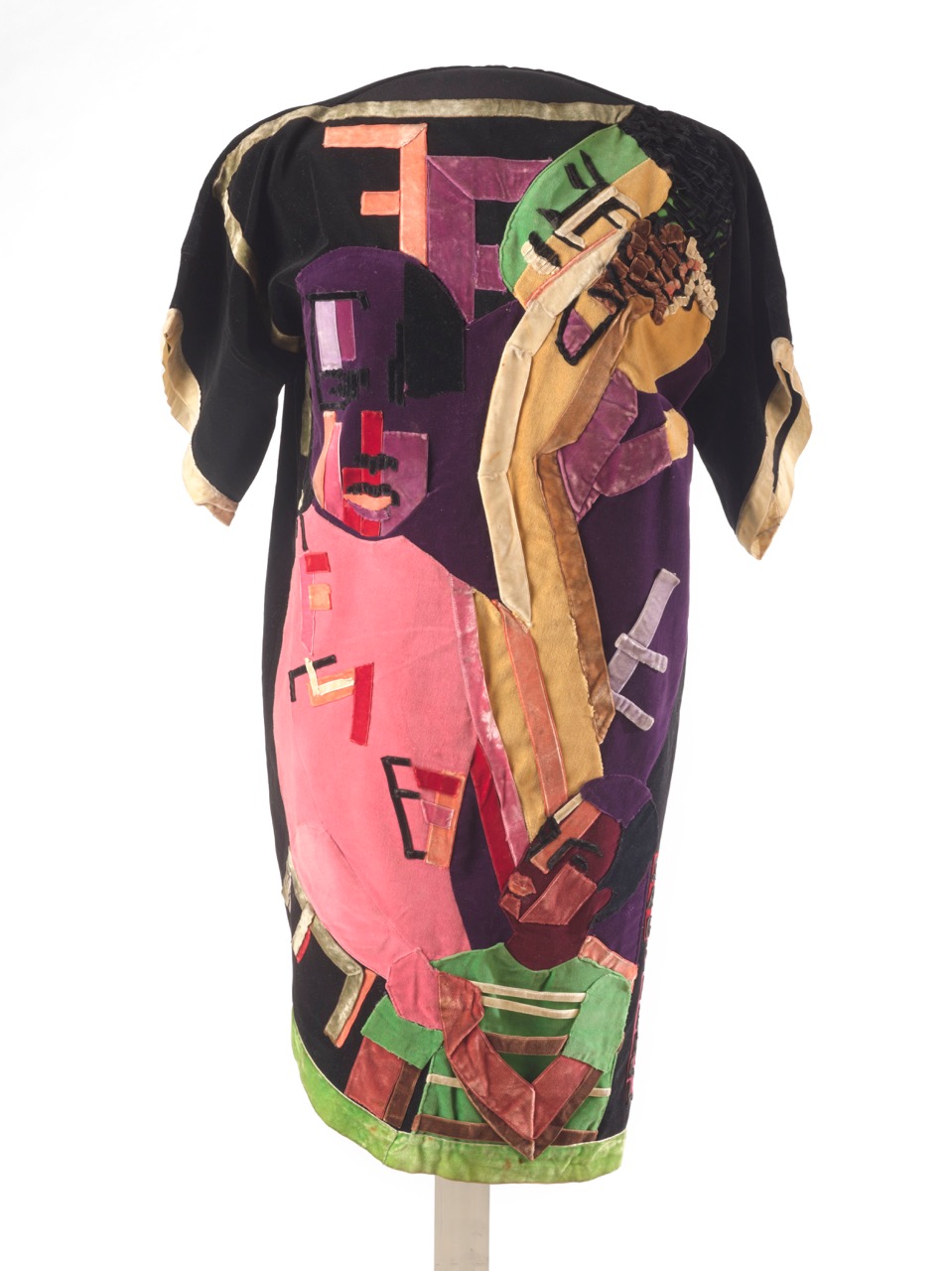 Cases of archival materials accompanying the artworks emphasize community and add historical texture through ephemera such as magazines, letters, and photographs. Despite the period detail, the archive often reads as eerily contemporary, from Toni Morrison’s 1971 critique of white feminism “What the Black Woman Thinks about Women’s Lib” to documentation of the 1979 protest led by Janet Henry and others about a show by a white artist at Artists Space entitled The N—— Drawings. It is startling, though perhaps it should not be, to see art-world celebrities deploying the same disingenuous anti-censorship arguments to excuse anti-blackness in 1979 that they are still rehashing today, but the role of exhibitions like this is to examine our collective stasis as much as our collective progress. In Barbara Jones-Hogu’s print I’m Better Than These Motherfuckers (ca. 1970), a Black woman in a meditative pose glares at a point in the distance, trying to rise above.

In a first for the Brooklyn Museum, the show spreads out from the Elizabeth A. Sackler Center dedicated to feminist art into the main exhibition rooms across the hallway. A rarely shown painting by Faith Ringgold, For the Women’s House (1971), hangs on the wall opposite the show’s entrance. In eight triangular panels, it depicts women working as doctors, bus drivers, and athletes in an everyday utopia: the bus is heading for Sojourner Truth Square. Ringgold painted this work as a gift for the Women’s House of Detention on Rikers Island. In an interview with her daughter Michele Wallace quoted in a wall text, she explained, “If I hadn’t done it for the Women’s House then it probably would have been more political. But these women have been rejected by society; they are the blood guilt of society, so if this is what I give them, then maybe that is what we should all have.” 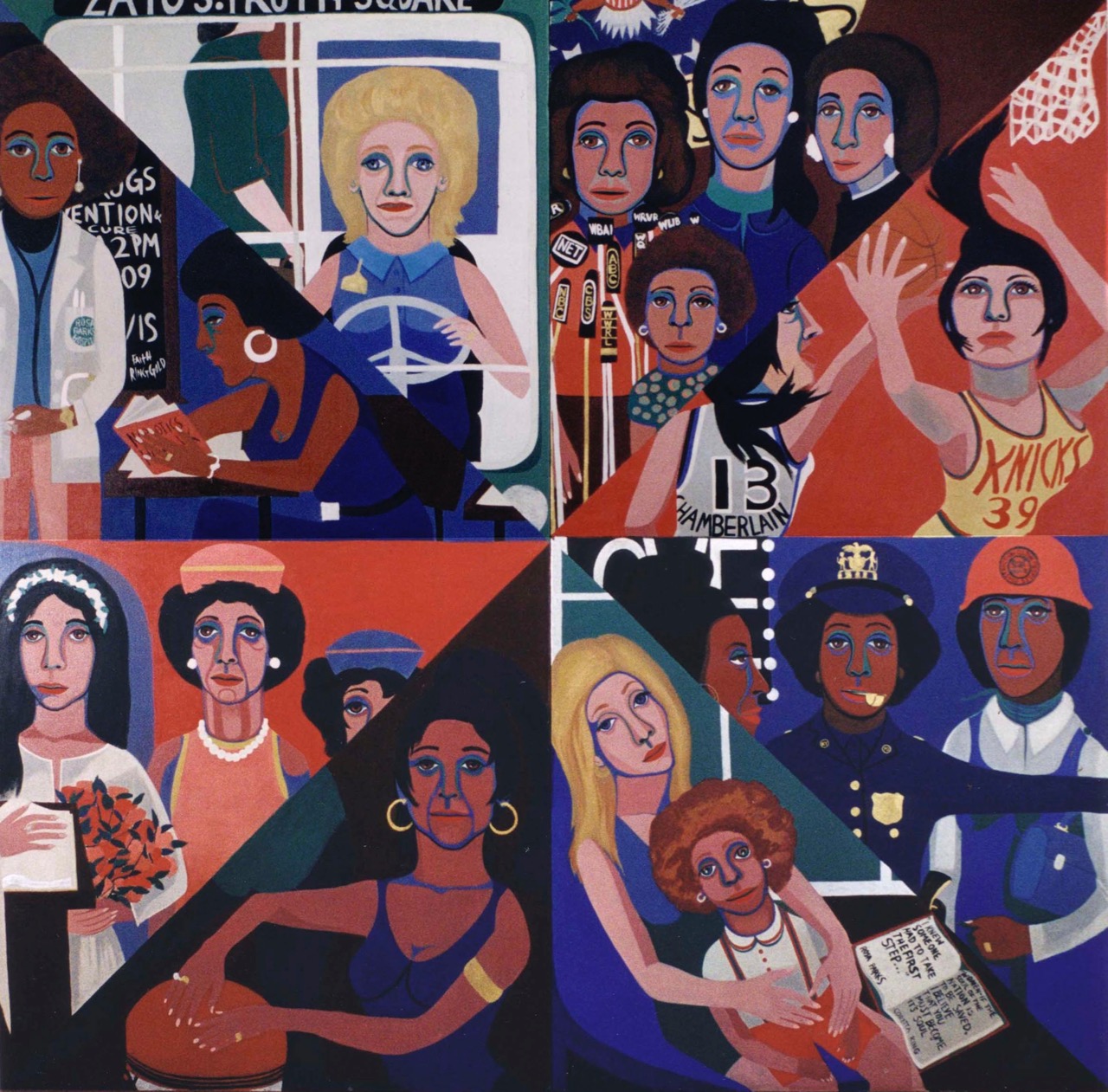 The paradox of this observation is that, in entering into an openly political process of art-making by consulting with jailed women, Ringgold ended up with something that she judged to be less political than she had anticipated. The painting is affirmative and aspirational. It imagines the “road out of here” envisaged by the women with whom Ringgold spoke. Instead of directly engaging the question of racial violence and its entanglement in representation, it presents a harmonious world of professional women. Ringgold allowed the prisoners to determine the nature of her gift to them. This unusual political responsiveness—in the sense of both feeling and responsibility—marks much of the work in the show. It characterizes a point of real political difference between collectively oriented art practices and other politically motivated forms of contemporary art. The latter work toward a horizon of escape from implication in institutions of domination, while the former (as characterized in this exhibition) use their structural antagonism to institutions as a means of becoming more involved in political struggle, which is to say, more expert in the practice of shared living.

Although the artists in the show include well-known figures such as Lorraine O’Grady, Lorna Simpson, and Carrie Mae Weems, the curatorial concept as a whole seems animated by the sense that a structurally racist disregard of art by Black women—this is “an under-recognized generation,” as the museum website puts it—constitutes another example of what Ringgold calls “the blood guilt of society.” Maren Hassinger’s sculptural installation Leaning was shown once in 1980 and never since until now; some of the material on the Where We At collective comprising Ringgold, McCannon, and others has never been officially archived prior to its display here. These works have not been adequately valued, which means that other more concrete values—money, resources, time—have also been denied to these artists and their communities. Representation would be a vacuous question if it didn’t index the question of redistribution. 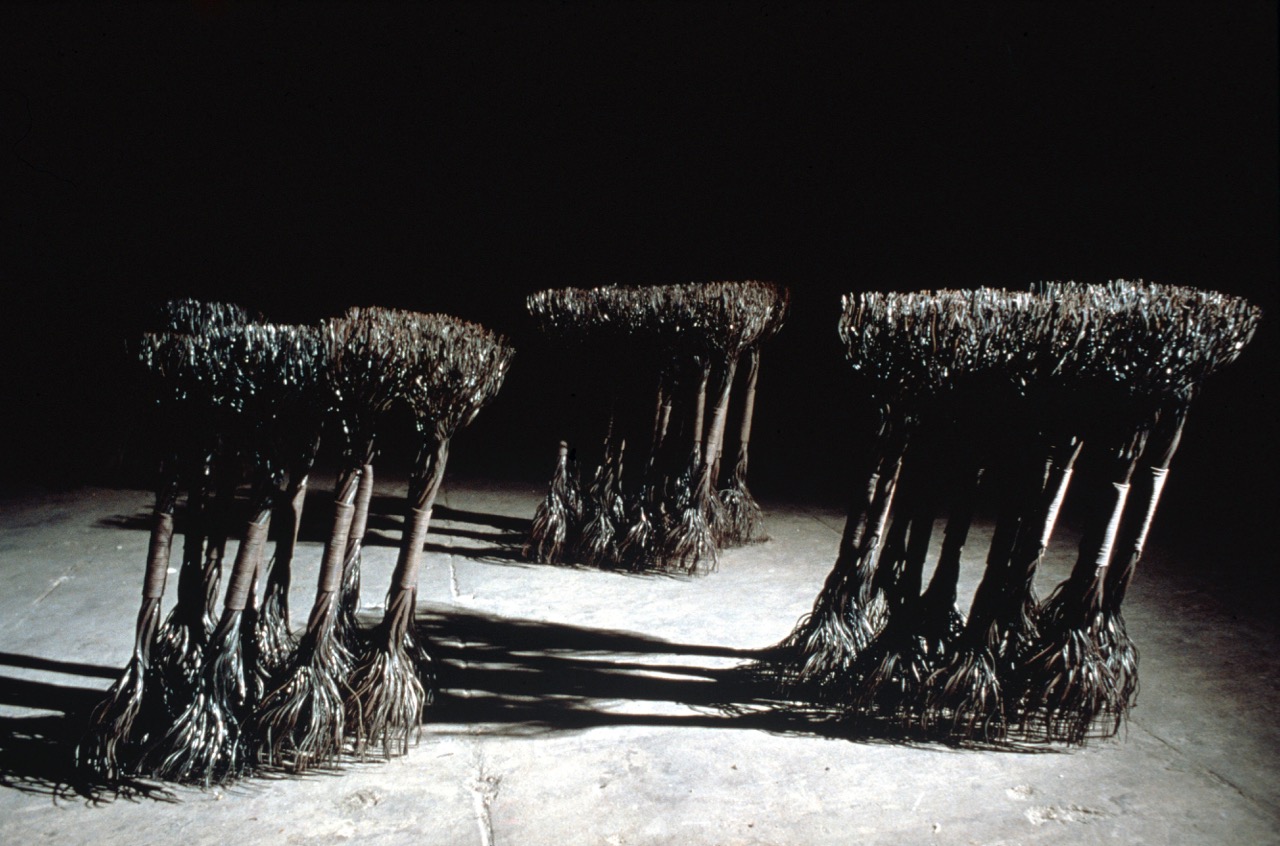 The complaint “we wanted a revolution” reflects the tragedy of the canonization of political art, in the sense that this art once worked toward the horizon of a different way of life entirely. Of course this thoughtful show also enacts the problem it names, and no one could have realistically expected it to be otherwise: this is a museum, and museums are sites of the production and maintenance of value; they are oriented toward the preservation of objects, which capitalism has rendered antithetical to the preservation of people. Even so, it is a complicated pleasure to see politically engaged and multivalent work by Black women displayed together. It is a pleasure because a lot of this work doesn’t get shown very often. It is complicated because a lot of this work doesn’t get shown very often. Thus one greets We Wanted a Revolution with cautious gratitude for its promise that what is done for love will be remembered.

Hannah Black is an artist and writer based in New York and Berlin. She has previously written for Artforum, The New Inquiry, Afterall, Texte zur Kunst, and a number of other publications. Her book Dark Pool Party was published by Dominica/Arcadia Missa in February 2016.