The visual seductions of a MoMA show threaten its social-justice goals. 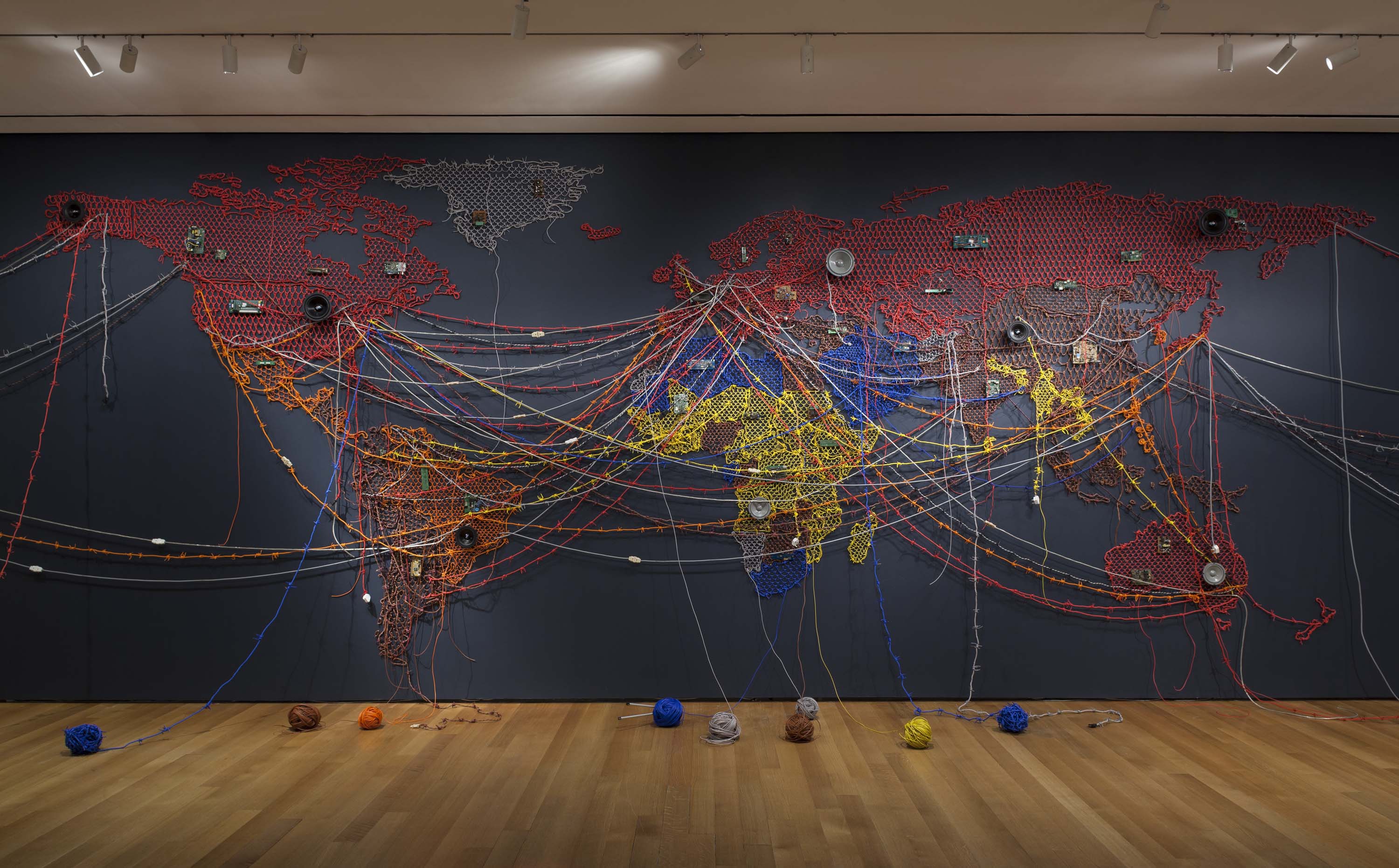 Introducing politics into the art museum creates an inescapable conundrum. On one hand, the quietly contemplative space of the gallery affords a meaningful pleasure, but a pleasure that takes us away from the world. On the other hand, the material on view elicits a moral call to action within the world—and along with it, an admonition against allowing contemplation to devolve into escapist surrender. This quandary unnerved me during my visit to Insecurities: Tracing Displacement and Shelter, a Museum of Modern Art exhibition curated by Sean Anderson with the assistance of Arièle Dionne-Krosnick.

The show, a product of MoMA’s Department of Architecture and Design, proposes a connection between contemporary architectural practice and the emergence of new global conditions of displacement and security concerns, with an emphasis on ad hoc or informal built environments. The curators have done an admirable job of collecting works from the foremost experts in social justice–oriented practice (both artistic and professional), and taken together the projects presented make a significant contribution to the even more important (and ongoing) MoMA initiative called Citizens and Borders (what the museum describes as “a series of discrete projects    . . . related to works in the collection offering a critical perspective on histories of migration, territory, and displacement”). The curators have also wrestled commendably with the tricky proposition of making a topic like population displacement visually compelling—a task rendered more difficult by the increasing impulse of socially engaged art of the past fifteen-odd years to exceed the limits of visualization.

This arc traces what artist-theorist Hito Steyerl calls a “withdrawal from representation”—a shift from visual representation acting as a site of contestation to the current situation in which the visual realm has been largely colonized by corporate and economic juggernauts. The fact that everyone is now in the PR business (their primary client being themselves) makes it even more challenging to maintain a critical edge in the visual regime as we sink into a sluggishness as hazy as the endless streams of Instagram and Facebook images through which we now thumb-flick away our precious waking hours.

I felt that detachment jeopardize my experience of the projects on display, particularly as these photographs and objects teetered on the verge of occluding the dispossessed people for whose hardships they stand to testify. I felt the works threaten to envelope me in a warm, comfortable embrace of sensory seduction. Consider Reena Saini Kallat’s Woven Chronicle (2016), a wall-sized map of the world fashioned out of electrical wires, circuit boards, and unshielded audio speakers. Visually, the piece is a stunner: clusters of filaments are bound together at structurally strategic points with the telltale claws of barbed-wire fences. Not only do these wires trace the imagined routes of the world’s diasporic migrations and escapes, but they serve double duty by feeding the speakers with a noise-scape of ambient buzzes and drones, the soundtrack (we are told) of what our abstract nomads might expect to encounter during their forced travels.

I wanted to allow myself to be drawn into this work and to muse on the overwhelming sense of displacement and evacuation, but still I found myself wondering about the anonymity of those refugees personified in Kallat’s matrix: Is the map meant to be a totalizing image of all possible routes of exile? Does the flattening of time and space in these individual experiences fail to elucidate the specific, harrowing stories alluded to and embedded in those tangled cords? Or is there a metaphor to be discovered—an observation that would convey us back safely to the realm of the aesthetic? 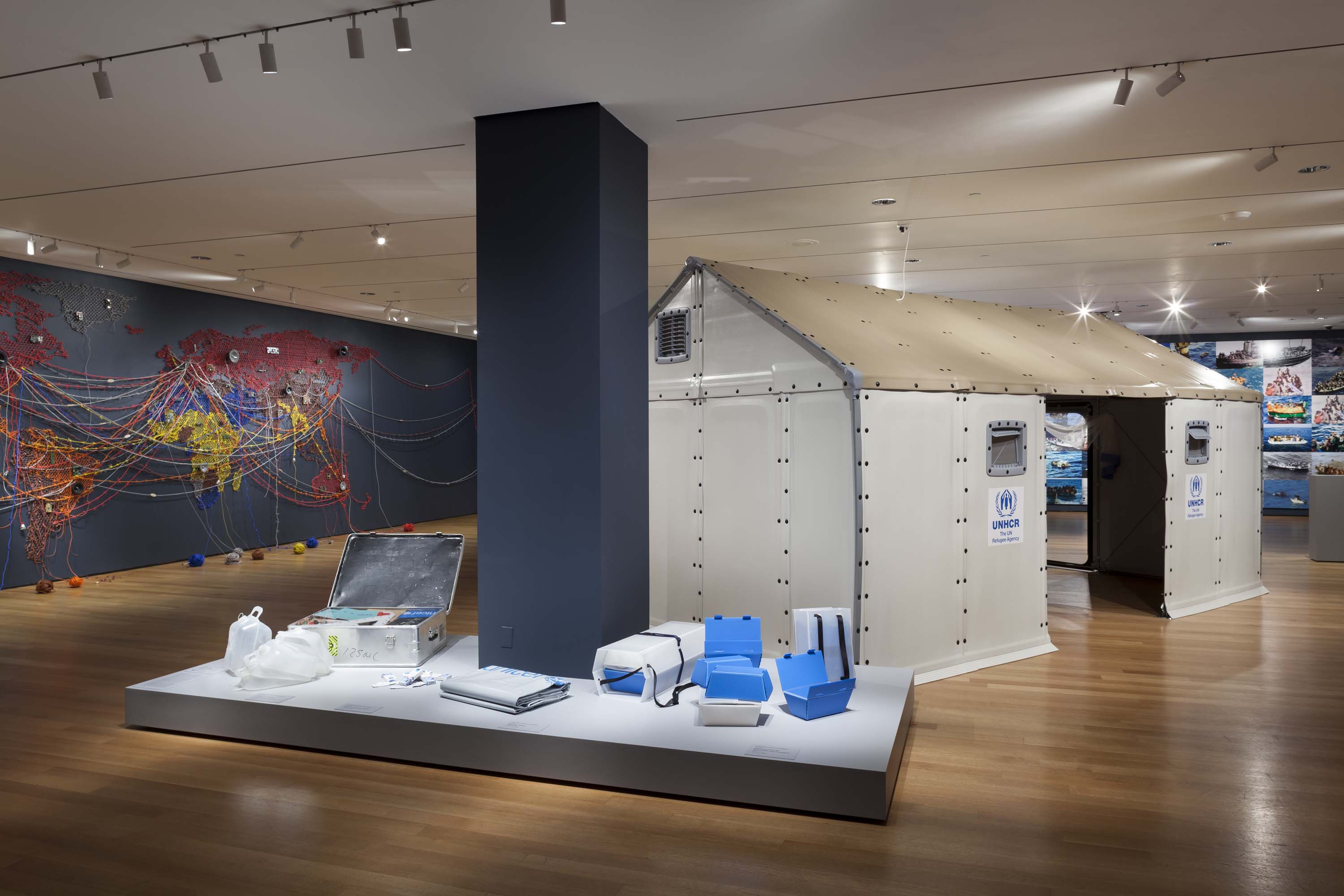 And what of works that are definitely didactic in origin and never intended for a gallery or museum: The United Nations Relief and Work Agency’s circa 1949 photograph of the Dheisheh Refugee Camp near Bethlehem; the Human Rights Watch’s photo of the United Nations High Commissioner for Refugees shelter tents in the Syrian refugee camp at al-Qaim, Iraq; a pile of UNICEF-provided water purification tablets? The informational function of these images and objects seems to have been abandoned and replaced with an alluring motivation that perturbed me: the photographs are here purpose-lit for maximum visual impact, the tablets arranged in a Felix Gonzalez-Torres-esque spill.

Forensic Oceanography’s Liquid Traces: The Left-to-Die Boat (2011) succeeds differently than many other included works by forcing us to examine our own complacency through the unlikely marriage of a pleading SOS with a compelling formal logic. This Swiss-Italian collaborative duo compiled data on a boat of Libyan refugees attempting a treacherous flight from Tripoli to presumably safe harbor on the Italian island of Lampedusa. The boat ran out of fuel in short time and remained adrift for two weeks in a heavily militarized (and thus heavily surveilled) maritime zone. During that time, it was seen and then ignored by passing ships, its distress signals disregarded by what investigations show to have been multiple patrols in the area. Using freely available oceanographic data, the team was able not only to trace the boat’s presumed drift but also to estimate the astonishing number of other vessels in the area, none of which took even a momentary interest in this boatful of undesirables. Sixty-three passengers died and only nine survived, a humanitarian disaster that clearly could easily have been avoided. 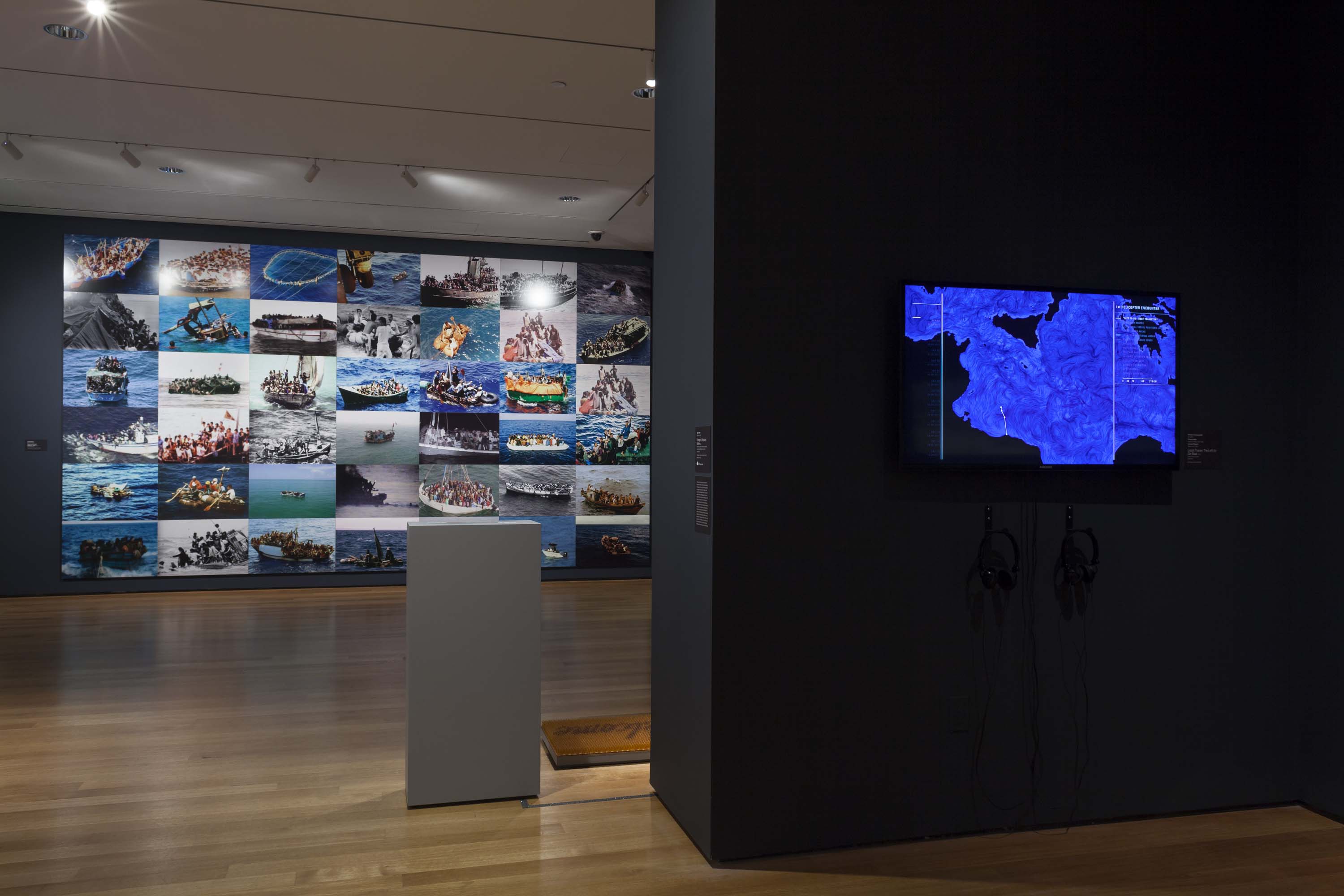 The project consists of a captivating eighteen-minute video—as good as any thriller—showing the drift pattern of the craft in a dark-blue, animated sea, one increasingly populated with icons representing other vessels floating about (in air and sea) in feigned ignorance of the blighted refugees. An impassive voiceover intones the story’s wretched details, leaving us aghast at humanity’s failure to rise and meet the most obvious of ethical choices. The high-tech bricolage (the enviable skill of being able to cobble together something coherent from whatever materials one has at hand) that allowed for such an expert forensic reconstruction of the tragedy dazzles us, and reveals how urgently we need to cultivate the nearly lost art of engaged looking.

Here, we are placed squarely on the horns of the dilemma sketched in my text’s outset, and can glean something of its solution: art museums remain spaces for meditation, sites where we can escape the noise of the world and be silent and focused and attentive. Given the conditions for this sort of absorption, encounters with a painful reality become all the more poignant. In the museum we escape the world so that we can see the world, and though it may produce many opportunities for distraction, there also exists the space to confront our anxieties about the very conditions we’re hoping to evade. 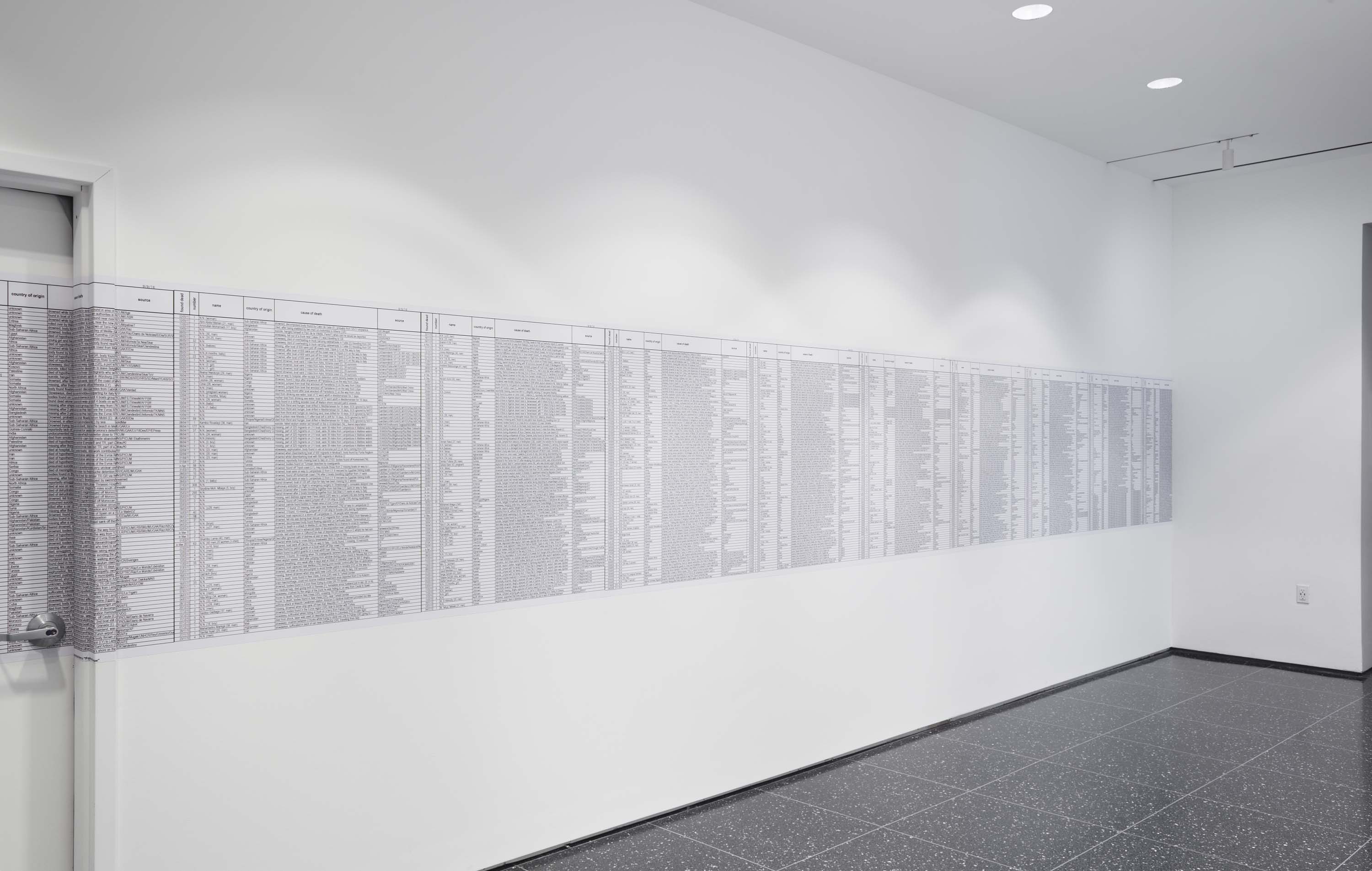 We might be made uncomfortable when, instead of luxuriating in the languorous beauty of Monet’s Water Lilies, we instead follow a similarly scaled wall piece that leads us out of the exhibition gallery into an adjacent room: United for Intercultural Action’s List of Deaths (1993–2015). This project is unflinching in its objective: to catalogue the deaths of refugees who perished as a direct result of their failed attempts to reach a place of safe haven—an inventory that includes names, dates, causes, and locations. The informational sources are manifold, and are presented as blunt, relentless statistics. The project is, by necessity, ongoing and unfinished. The viewer can, and must, fill in the details with her imagination. Perhaps this kind of activity can force us into a different form of contemplation without an easy excuse for looking away: a political act of looking.

Noah Chasin writes on the intersection of human rights and the built environment in the age of twenty-first-century urbanization. He teaches at Columbia University, where he is affiliated faculty at the Institute for the Study of Human Rights, and at The New School. He is executive editor at The Drawing Center.