Zut! A biopic about the iconic French writer is strenuously woke but sapphically lite. 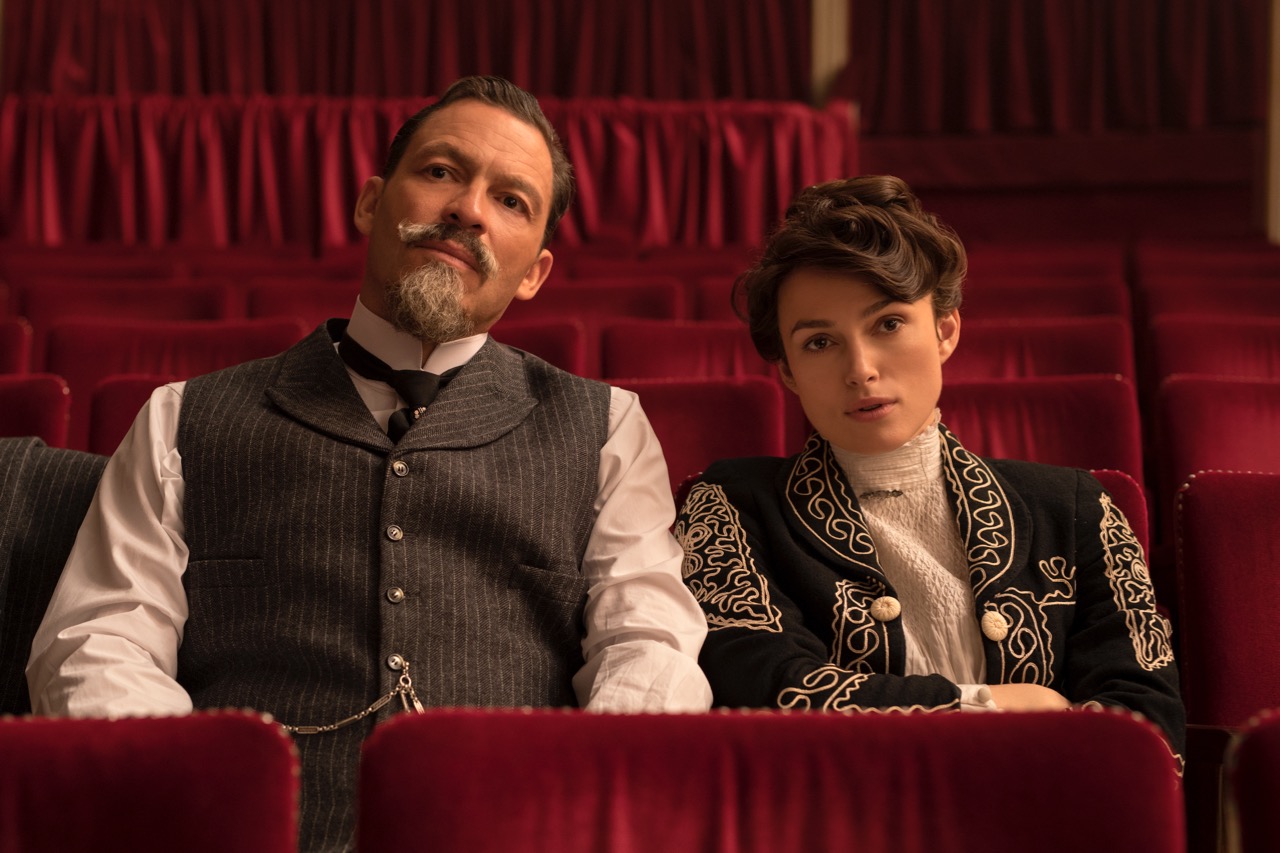 “Bad theater is like dentistry,” announces a character early in Colette, the idea being that you have to sit there and grin while the playwright drills into your face. Bad cinema is more like marriage: dull, sexless, and far less unique than it imagines. You want to like it, but you can’t find the reasons. Once it’s over, you can’t remember why you ever thought this was a good idea.

Wash Westmoreland’s new biopic Colette, based on a script he cowrote with Rebecca Lenkiewicz and his late partner, Richard Glatzer, depicts the early years of the eponymous French writer’s career, during which she was married to notorious libertine Henry Gauthier-Villars (Dominic West). Better known by his nom de plume Willy, her husband runs a “factory” of ghostwriters, and before long he has roped in his intelligent young wife (Keira Knightley) to write a racy novel based on her school days. The resulting Claudine series, published under Willy’s name between 1900 and 1904, is a wild success. Colette and Willy’s union is not.

Occasionally brilliant dialogue (“I can read you like the top line of an optician’s chart”) and some truly gorgeous costumes reminding you just how gay the ladies of the Belle Époque used to dress (the answer: A Lot Gay)—these cannot rescue viewers from the fateful decision to build the film around Colette’s marriage. It is as if the writers were so eager to expose Willy as a boorish, philandering Svengali that they forgot to make a movie about Colette. 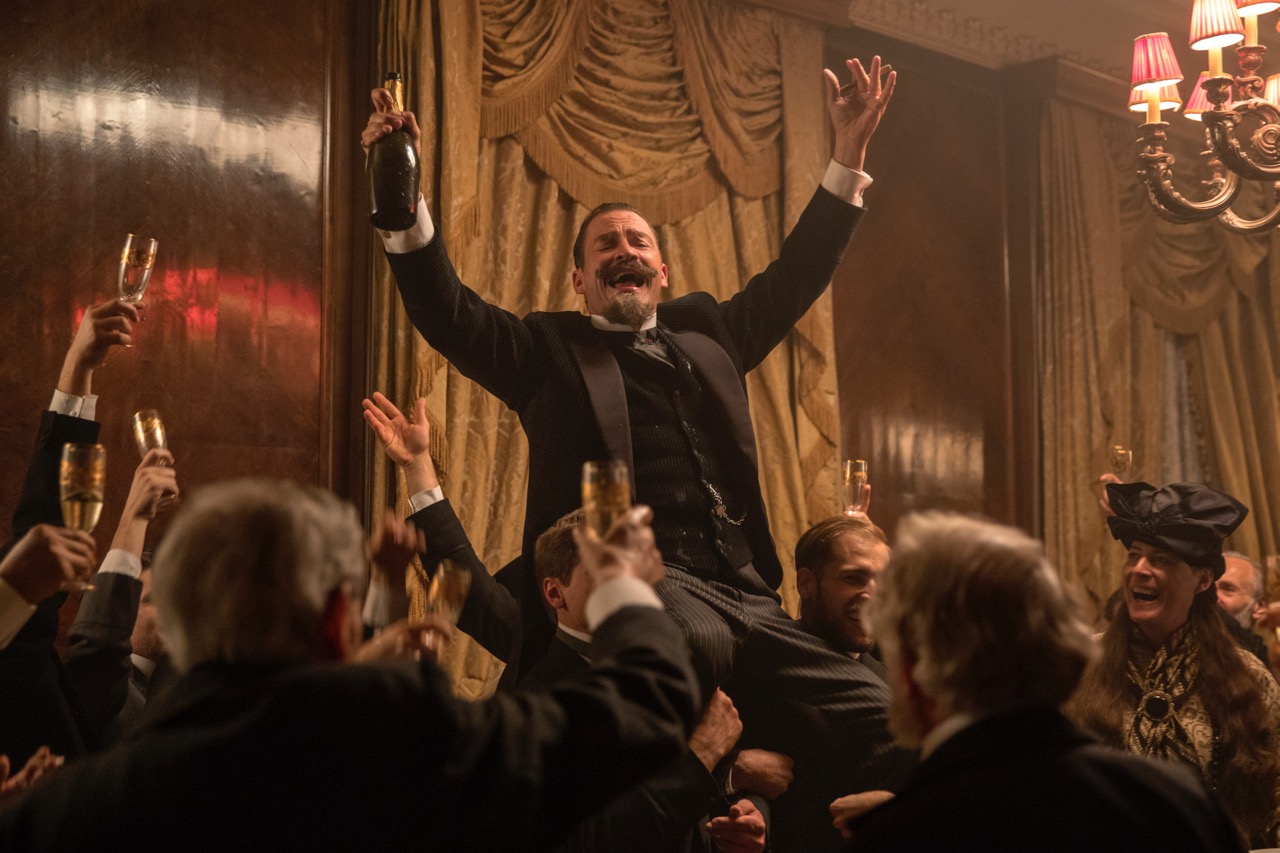 In Willy’s tentlike three-piece suits, West is positively énorme, stomping about and bellowing demands like an irate hockey player. Willy manspreads over the entire production, eating up screen time. “This is what men do,” he says to Colette after she discovers him with one of his kept women. There is, to be fair, some mild interest in watching Willy encourage Colette’s same-sex liaisons, and it is genuinely touching when, abashed and wearing an immense nightshirt, he confides to his wife that he can no longer get it up for his mistress. But impotence notwithstanding, it remains the case that, for a film that clearly wants to honor Colette as a sapphic icon, there is far too much Willy.

Not that he would know. “Isn’t there something . . . missing?” Willy asks Colette nudge-nudgily, regarding her affair with the handsome Mathilde de Morny (Denise Gough), whom Colette addresses by the incongruous nickname Missy. Westmoreland dispatches Willy’s insolent homophobia with a swift cut to Colette sucking on Missy’s finger. (To man, God gave one member; to woman, He gave ten.) No, biology is not an issue. But chemistry—that is missing. Since Knightley is going gay for pay here, one would at least expect the results to be, well, gayer. As it stands, she and Gough have all the mutual magnetism of two spoons placed ten inches apart. One longs for one Rachel to spit into another Rachel’s mouth, as seen earlier this year in Sebastián Lelio’s quiet, Jewish-family drama Disobedience. 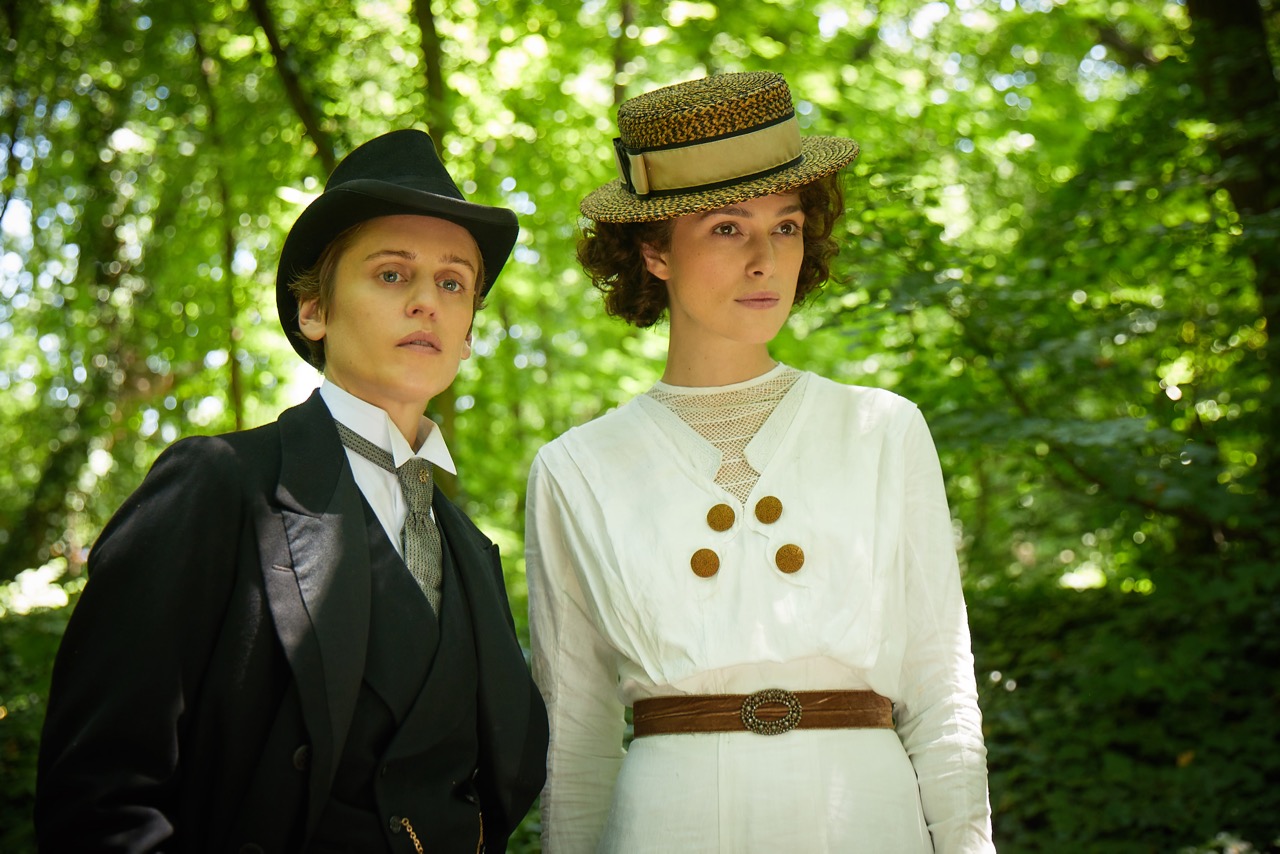 It’s worth mentioning that Missy’s gender is a question of some historical interest. All one can say for certain is that the scandalous aristocrat was a full-time cross-dresser who bedded a lot of women. To “claim” Missy as a butch lesbian, a trans man, or a genderqueer person (among many other contemporary labels) would likely reflect the narcissism of anachronism more than any historical truth. At any rate, the filmmakers are more invested in aggressive allyship than the difficulties of deviant historiography. In one scene, Willy refers to an absent Missy with female pronouns. “He,” fires back Colette, inconsolably woke. None of this ever comes up again. Whether Missy is a man or just enjoys masculinity—I call my girlfriend my boyfriend all the time—the only reasonable conclusion is that Westmoreland and his team are tremendously with it.

This is one of those movies in which the characters speak English in British accents but we are given to understand that they are in fact speaking French in French accents. The device works delightfully in the writing sequences: we hear Colette say the word “snakes” in voice-over as we watch her pen trace des serpents. But things fall apart when other inflections enter the fray. Colette’s first lady lay, Georgie (Eleanor Tomlinson, English herself), is a gold-digging Louisiana transplant, and Tomlinson’s mangled attempt at long Southern vowels ruins the illusion faster than a baby bump at a debutante ball. 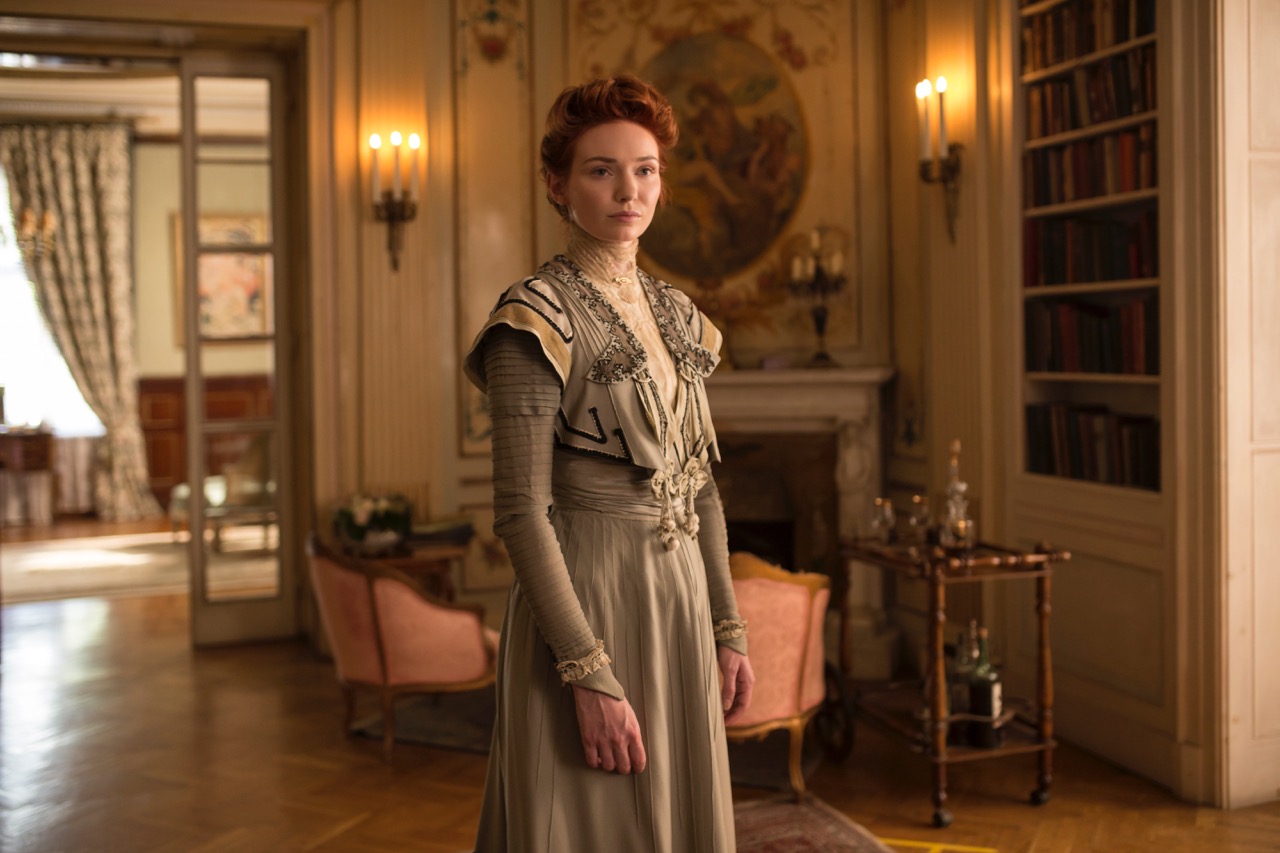 Other moments are thankfully easier on the ears. A seasoned composer of orchestral and choral music here scoring his first film, Thomas Adès fully delivers, especially in his waltzes: a dark and decadent one for the salon scenes, and another with an earnest, childlike theme that I whistled all the way home. What a joy to hear a melody in the age of Hans Zimmer! The curated music, meanwhile, is historically satisfying: I counted not one but two diegetic Debussy piano pieces (Adès is a concert pianist), while an original composition features parallel thirds pleasantly evocative of those in “Clair de Lune.”

If only the same attention had been given to Colette. Our heroine is largely under-written, and Knightley’s teasing eyes are not enough to give her much of an interior life. This is especially disappointing if you, like me, but very unlike my mother, think that Knightley is a capable and charismatic actress who is unfairly maligned for using her face to act. One could say of Colette that she suffers no fools, were she not constantly surrounded by them. She is cheeky, unflappable, and intelligent, probably. Colette will eventually take up pantomime, starring in elaborate, risqué stage acts alongside Missy and the great mime Georges Wague (Dickie Beau), but it is Westmoreland who can only gesture mutely at his subject’s personality. 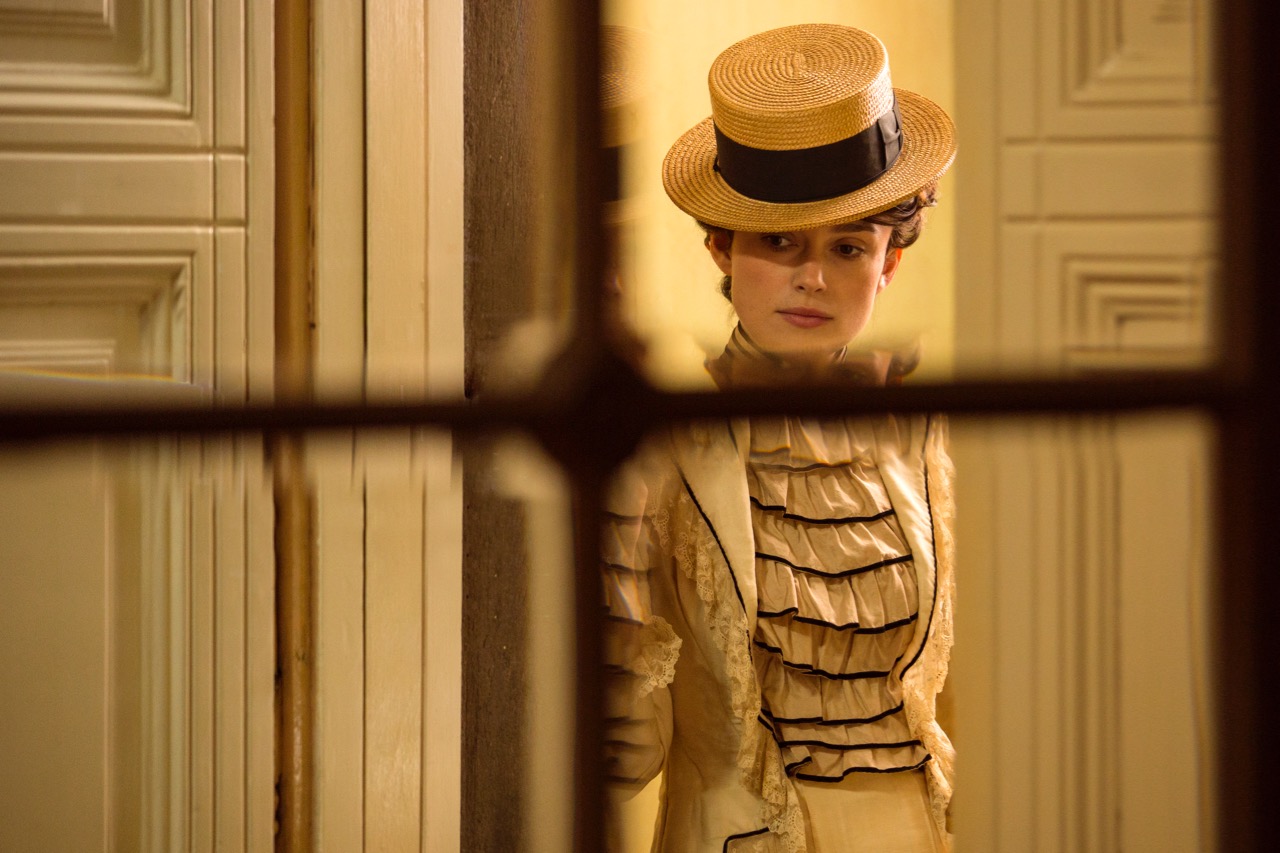 Maybe that isn’t the point. Words are inconsequential, Willy instructs Colette; all the public really wants is an “emotion.” As I write this, I’ve just received an email from the underwear startup ThirdLove exhorting me to “join the movement.” I do not know what the movement is, only that it presumably involves disrupting the boob space. Colette is like this: empowering in a very general way, without needing or trying to say anything in particular. When Willy reads the first draft of what will become the 1900 bestseller Claudine à l’école, he tells Colette that while she is clearly a natural talent, the book is “too cloying, too feminine.” At this line, a woman at my screening let out a firm, gratified HMM! The rest of us leaned in.

Andrea Long Chu is a writer, critic, and doctoral candidate at New York University. Her writing has appeared, or will soon, in n+1, Artforum, Bookforum, Boston Review, Women & Performance, differences, TSQ, and Journal of Speculative Philosophy. Her book Females: A Concern is under contract with Verso Books.