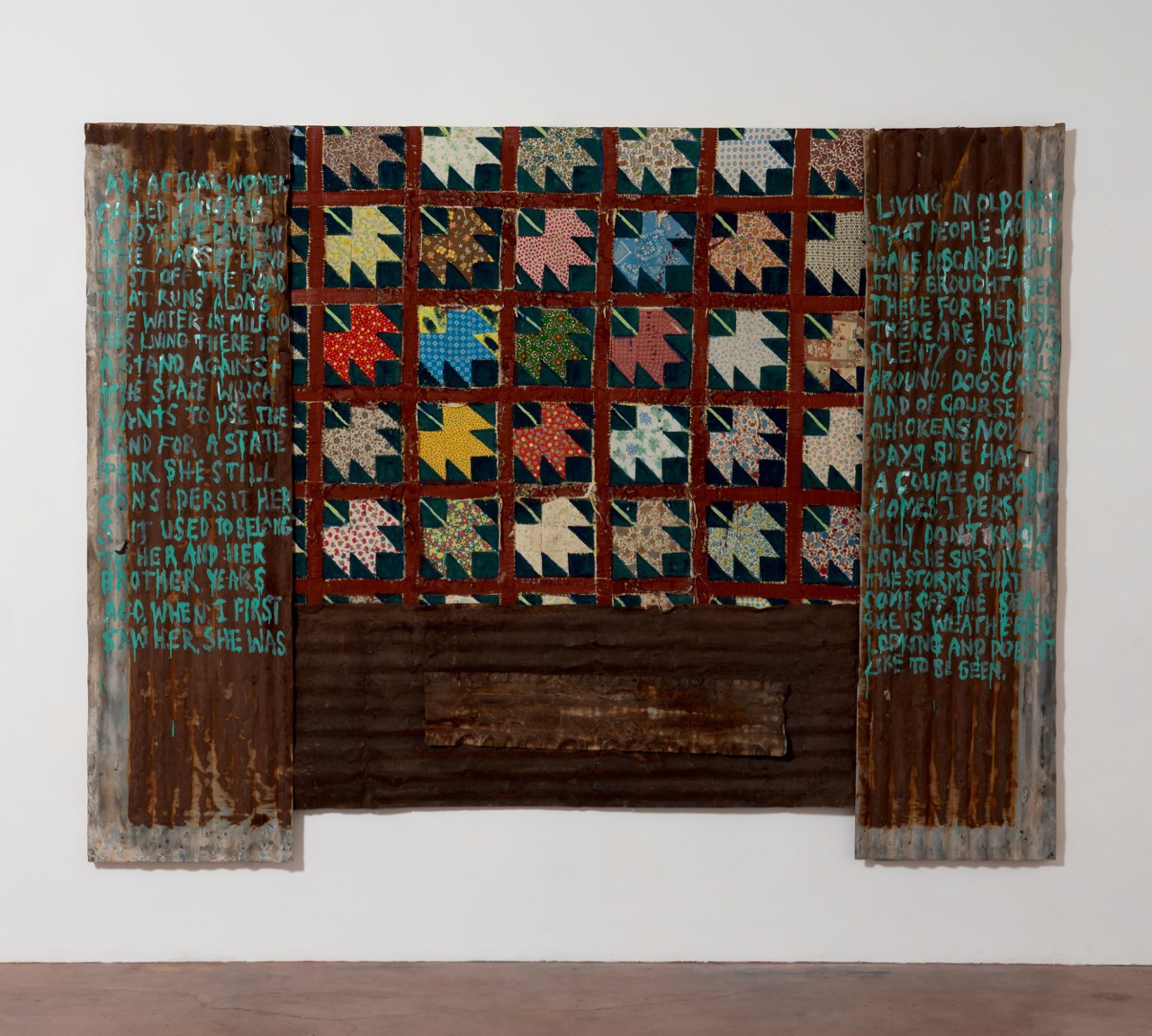 In late 1976, Lucy Lippard, Arlene Raven, and Ruth Iskin invited artists around the country to answer the prompt “What is feminist art?” The following February they tacked the responses to the wall for an exhibition at the Woman’s Building in Los Angeles. Harmony Hammond—cofounder of the women’s collective A.I.R. Gallery, member of the Heresies Collective, and soon-to-be organizer of A Lesbian Show at 112 Greene Street—replied with a brief statement on graph paper, her fluid script unconstrained by the grid lines. Defining feminist art as “a matter of consciousness” and “by women, for women,” Hammond declared, “Feminist art is the form becoming real,” and signed her name in the lower right-hand corner. Above her signature, she added a word, underlined with a flourish: “Dangerous.” As an afterthought, it was somewhat at odds with the our-bodies-ourselves rhetoric of her preceding sentences. Yet the incongruence between her earnest, deliberate sentiments and the indeterminate threat conveyed by her addendum has been a fundamental element of Hammond’s work throughout her long career. For five decades, Hammond has engaged histories of women’s labor and bodies, of abstract painting, and of traditional craft with careful, at times literal, attention to form made flesh—and throughout, those forms have been underpinned by an intimation of peril.

The sumptuous exhibition Material Witness at the Aldrich museum stresses the variety of materials the artist has used from 1971 to the present, and it emphasizes the metaphorical valences of menstrual blood, hair, rags, straw, rusted tin, and, above all, paint. But Hammond’s long-overdue first museum survey also demonstrates how the split seams, frayed edges, and punctures that fill her works express not just an empathy with violence endured by material objects, but also an ability to accept these “wounds” without a compulsion to tend to or care for them. 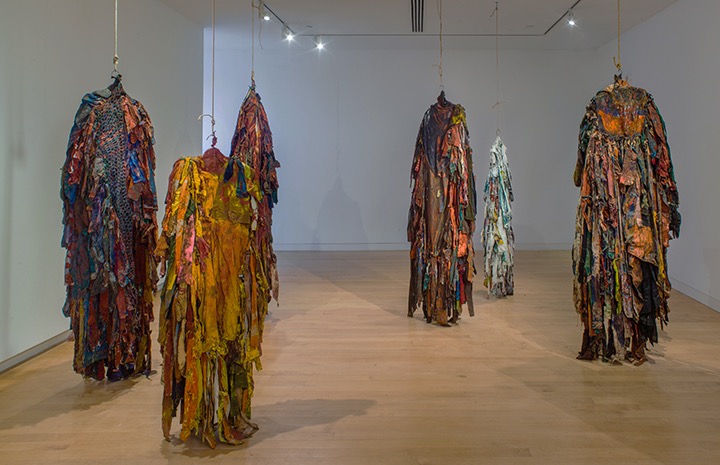 The most confrontational pieces are also the earliest. Presences (1971–72), one of Hammond’s first major series after moving to New York from Minnesota in late 1969, is a group of densely layered fabric garments that drape from coat hangers suspended from the ceiling by coarse rope. Rarely seen since 1973, when they debuted as part of her first solo exhibition, the six larger-than-life works crowd the low-ceilinged room. Thick swaths of dark and dun paint cover the cloth strips (save for the all-white Presence II), suggesting that a weighty burden shrouds the objects; the stifling feeling is only increased by an occasional unvarnished bit of blue-and-white gingham or neon-green fabric that peaks out from beneath the layers. Hammond describes the works as, collectively, a “ragtag army of women claiming space.” But if they are presences, they are also ghosts, uninhabited shells. 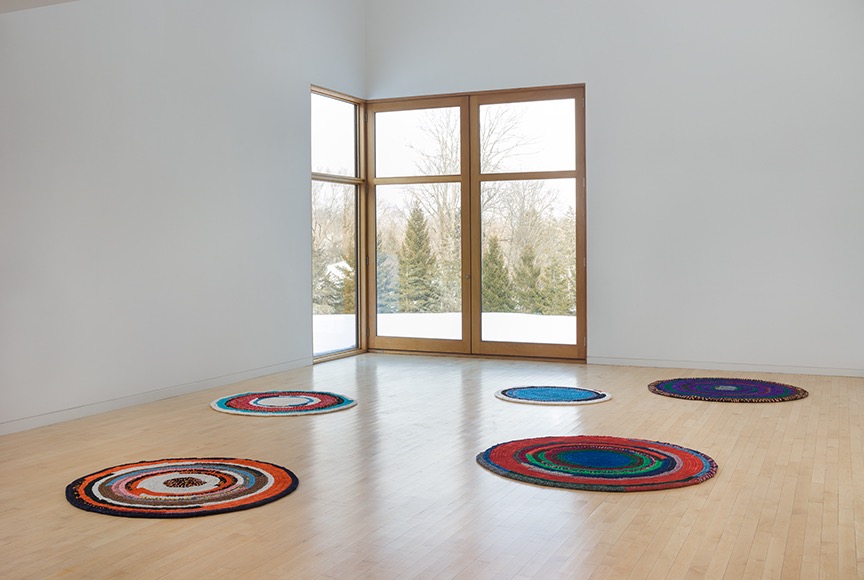 Hammond’s Floorpieces (1973) point, too, at a self that has been removed or a form collapsed under its own weight. These braided rag rugs were made from scraps the artist salvaged near her lower Manhattan apartment. Brightly colored and rhythmically patterned, they were her most conspicuous nod to handicraft. Yet Hammond purposefully distanced them from pure domestic associations by making them thicker and larger than conventional rag rugs and painting them with acrylic. The pigment discreetly concealed some patterns and extended the colors of other fabrics, so that the painted passages were not always easily identified—critics have often overlooked them altogether—but they also changed the rugs’ texture and vibrancy.

At the Aldrich, the extant group of five (Hammond destroyed Floorpiece I) is shown, for the first time, as the artist intended: on the ground with bare surrounding walls. Rather than positioned on low platforms as in the past, the rugs rest on the maple floors of a double-height room, and their isolation accentuates their horizontality. Hammond’s works clearly engaged with her contemporaries like Carl Andre, whose metal grids were critically disparaged as “rugs,” but the allusion was not just art historical, as Julia Bryan-Wilson has elaborated in Fray: Art and Textile Politics (2017). Instead, the braided mats evoked a spectrum of lesbian and queer euphemism, sexualizing their position with references to coded slang that “render this horizontality and lowness specifically lesbian.”

Despite Hammond’s frequent use of textiles and her recurring interest in braiding and weaving, the Floorpieces are in some sense outliers in her practice, and not just for their position and color palette, which is far brighter than many of the rusts and dusty browns and bone-colored whites that she used in later paintings. Never again would she be as evasive in her application of paint, and her use of craft techniques and materials would henceforth be more clearly subordinate to painting itself. 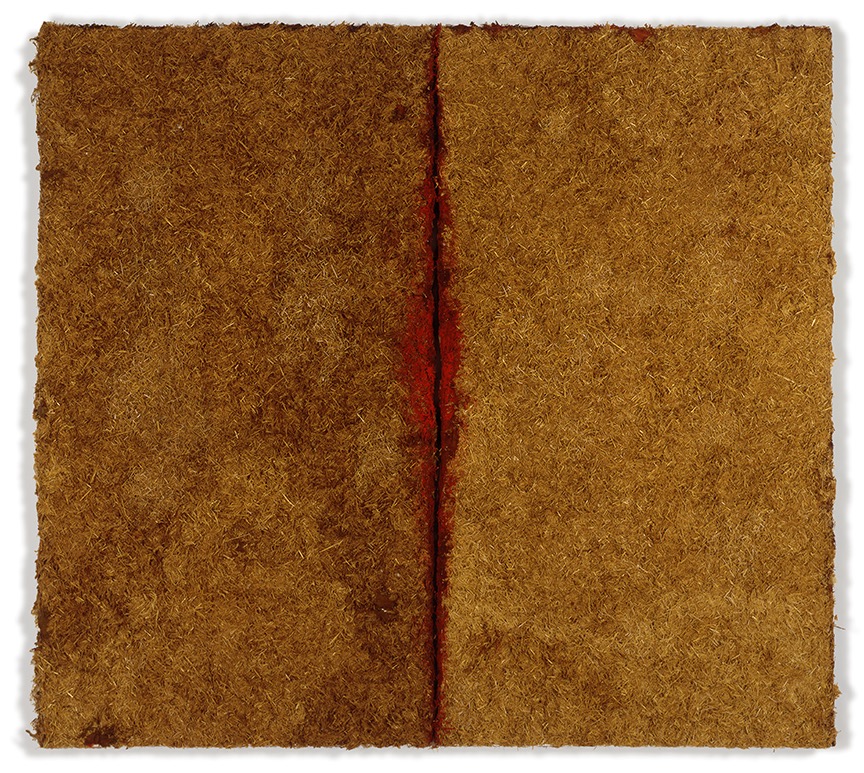 Hammond left New York in 1984 for New Mexico, and the change in her artwork is palpable. The paintings became bigger—some as large as eighteen feet across—and her materials shifted from urban detritus to objects with rural overtones. Throughout the 1980s and ’90s, she focused on, as she put it, “metaphors of land and the gendered body as sites of exploitation.” In Untitled (1995), two panels, each just over six by three feet, have been covered with short, uniform lengths of straw. Along the joining seam of the diptych, she has painted the straw a deep red, turning the threshold into a blood-soaked wound. The conflations of nature and the female body may walk the line of essentialism, but Hammond’s engagement with technical versions of natural materials—in this example, the straw had been cut to uniform lengths to be used for adobe bricks or mud plaster—offers a level of nuance that avoids such easy readings. 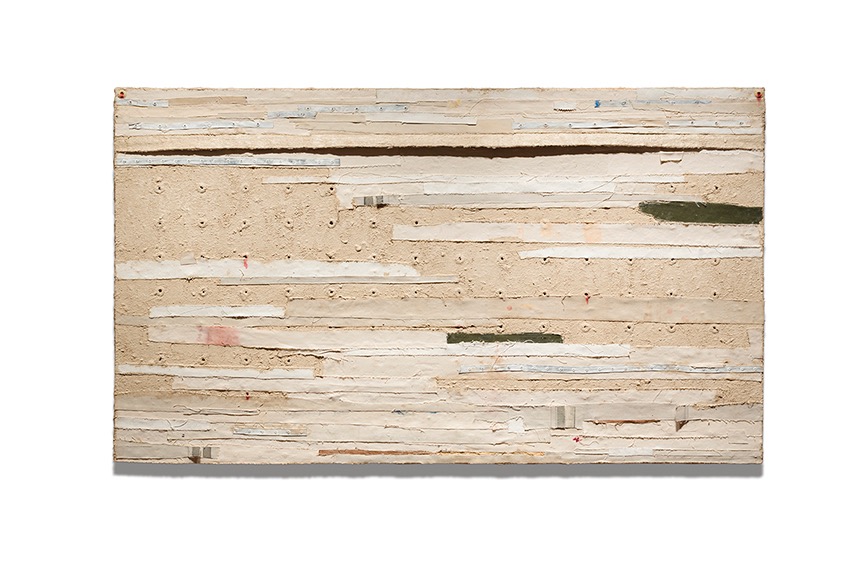 The “near monochromes” of the last few years include straps, grommets, and ties—all manner of binds—that in a piece like Bandaged Grid #1 (2015) are encased within thin layers of creams and tans against a grid of small holes. Flecks of red and brown drip and even ooze from some of the perforations. Yet despite the intimation of gauze and dressings, Hammond’s painting seems more invested in the materiality of its components than in any metaphorical attempt to salve or heal.

Seeing Hammond’s works together, moving through them chronologically, it becomes apparent that over time the pieces have become increasingly attuned to the vagaries of our somatic responses to abstraction. The danger that Hammond identified as a feature of feminist art has shifted, too. Masterfully relating the viscosity of paint to our own bodily experiences, Hammond has always been attentive to the canvas and the body as sites of rupture, and potential hazard, but the arc of her career suggests that in the 1970s “dangerous” was an assertion of the power feminist art could wield. Now, the threat posed by feminist art—and by extension lesbian and queer art—lies in a refusal to be limited by the categorical logic that might seem to name it. The danger is in its indeterminacy.

Rachel Churner is an art critic and editor, and a founder of no place press. A regular contributor to Artforum, Churner was a recipient of the 2018 Creative Capital | Andy Warhol Foundation Arts Writers Grant. She was the editor of Hans Haacke (MIT Press, 2015) and Jordan Kantor: Selected Exhibitions 2006–2016 (no place press, 2017), and is currently completing a volume of Annette Michelson’s essays on Soviet cinema (MIT Press, 2020). Churner teaches in the Department of Visual Studies at the New School.