Hybrid forms and landscapes invoke the possibilities of
a Black femme future. 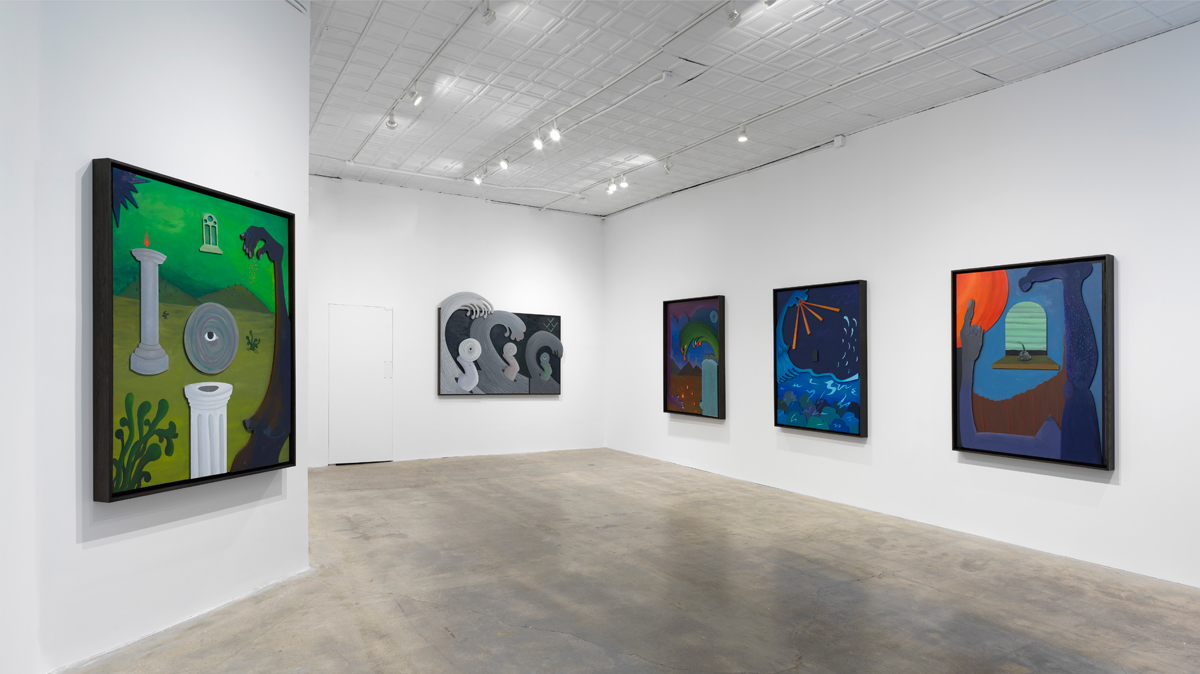 Gagosian’s low-key storefront exhibition space on Seventy-Fifth and Park is currently hosting a show of Alexandria Smith’s new work, curated by Antwaun Sargent. At the opening, the artist told me the suite of half-a-dozen paintings and four collaged drawings was inspired by a visit to the Peggy Guggenheim Collection in Venice a couple of years ago. Of course, I thought: Surrealism, a movement in which that museum’s holdings are particularly strong, has always played a role in Smith’s practice. I immediately assumed the amoeba-like wood reliefs of Hans Arp and the dreamscapes of Yves Tanguy and Salvador Dalí were the impetus for Smith’s three-dimensional paintings, made of plywood shapes attached to panels, that depict trippy, sexy, funny, and poignant landscapes populated by biomorphic shapes evoking mixed-up, mutating, only quasi-human bodies. 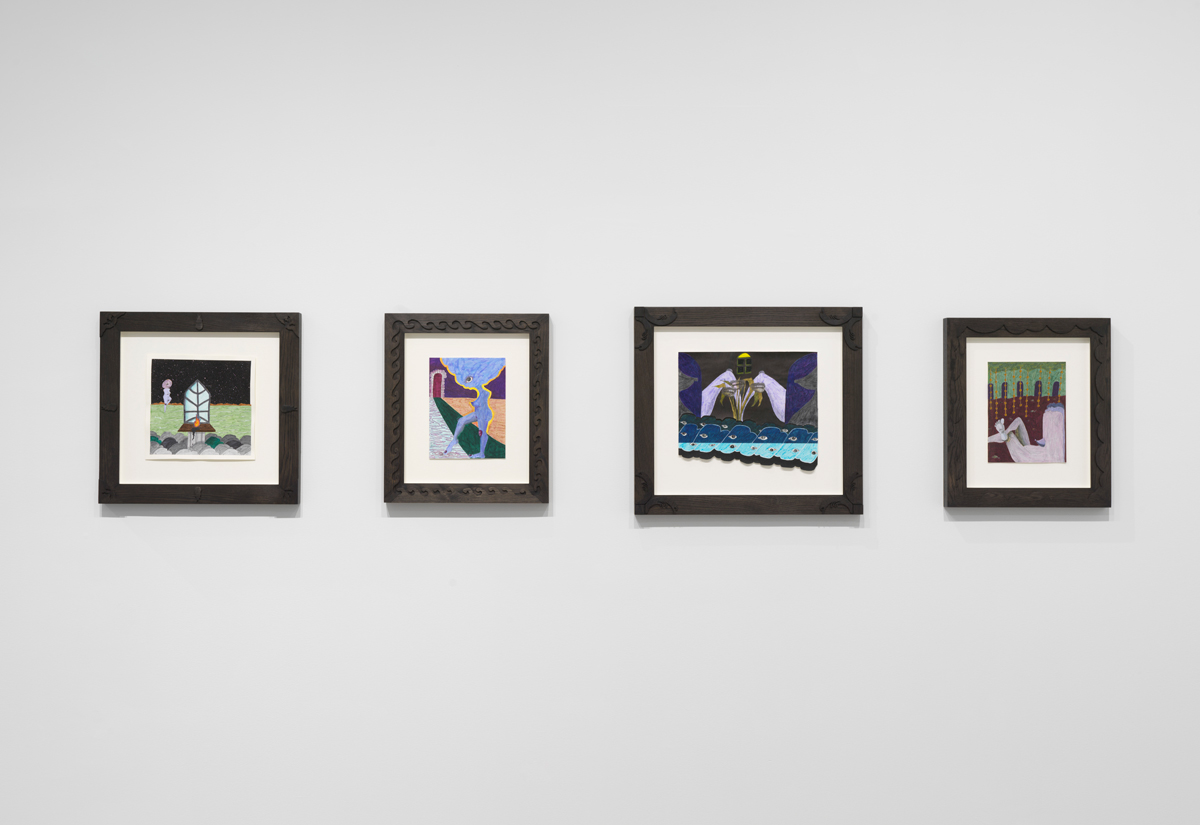 But, to my surprise, she went on to say that what she found particularly inspiring were the facsimiles the museum offers blind and low-vision visitors so they too can experience the paintings, substituting the smoothness of the originals into something that registers viscerally. Smith’s father was blind, she explained—she created these paintings with him in mind. The story seems to perfectly encapsulate how the Bronx-born, London-based Smith operates: she is always finding unexpected ways into her medium. Surrealism, yes, plus the very different assemblage aesthetics of Betye Saar’s investigations of Black femininity and Red Grooms’s idiosyncratic Pop paintings and sculptures—but accessibility aids, comic strips, animation, and ’60s and ’70s psychedelic album covers also find their way into Smith’s show, with deeply satisfying results. 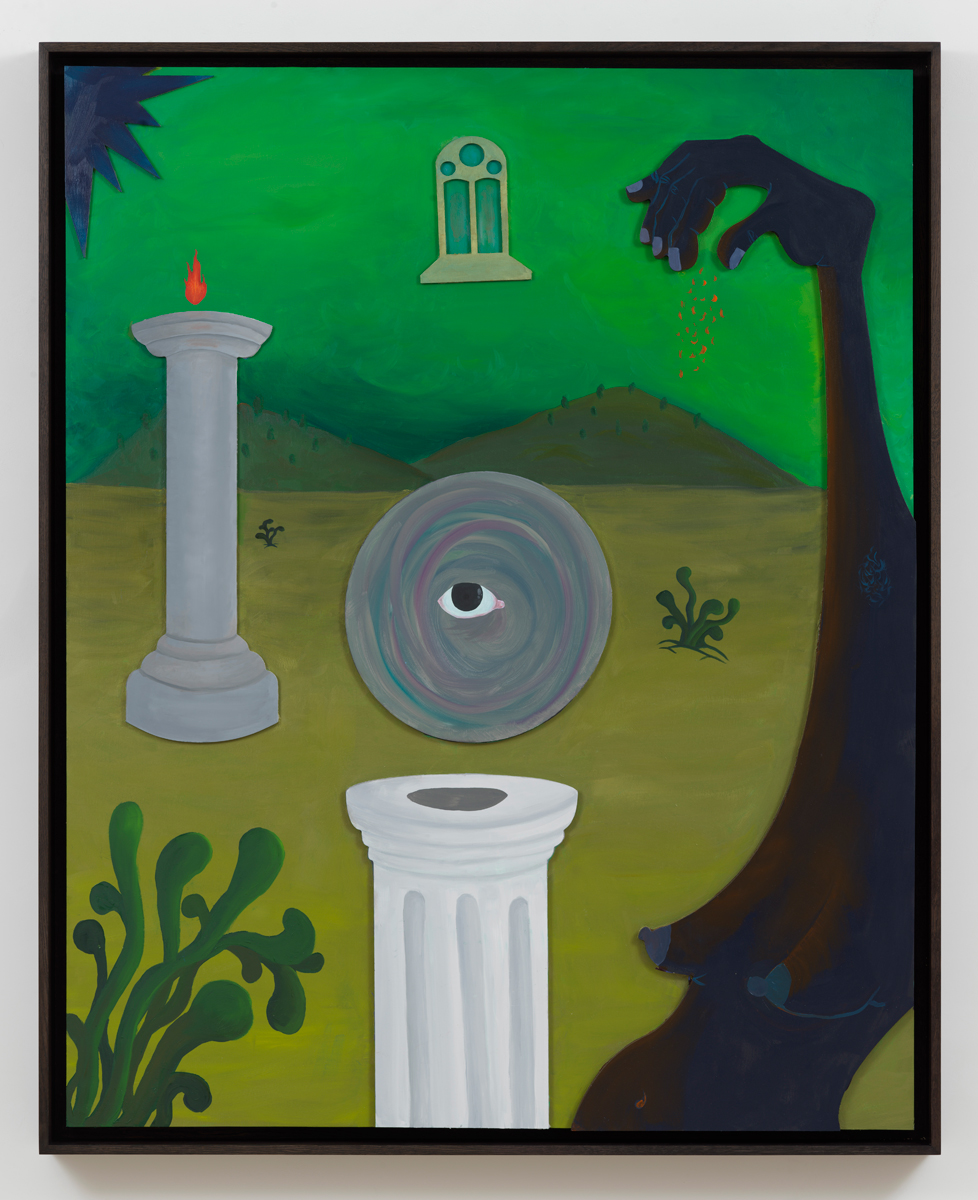 Along the right side of a Mythopoeic ecstasy (2022), a plywood shape emerges from the lower edge of the panel, rising and transmogrifying as it does so: an expanse of belly swells into a pair of pertly nippled, upturned breasts, and then, instead of sprouting shoulders, neck, and head, it becomes all arm, ending in a flop-wristed hand with cartoonish fingers that sprinkle something (orange fairy dust? seeds, maybe?) on the ground. This be-titted, bellied limb functions like a repoussoir element one might find in classical landscape painting: a foreground tree or rock outcropping designed to lead your eye into space. And what a view! It could be that of a terrestrial vista (note the two mounds along the horizon that are either hills dotted with pines or whiskered breasts). But it also resembles a sea (seaweed forms seem to spring up here and there like body hair), a distant, green-skied planet, a Paleozoic earth, or something else entirely. Above a collaged fluted column in the foreground, which looks like a dislocated stage prop, appears a plywood disk where spiraled brushstrokes of gray, blue, and pink surround a skeptical eye. Another column further back is surmounted by an intense orange flame. Hovering in the sky is a simple wood cutout suggesting a Gothic window frame; my gaze keeps coming back to it with annoyance because it is attached barely off-center and at a slightly wonky angle, creating a disturbance in what is otherwise an orderly, if supremely weird, composition. 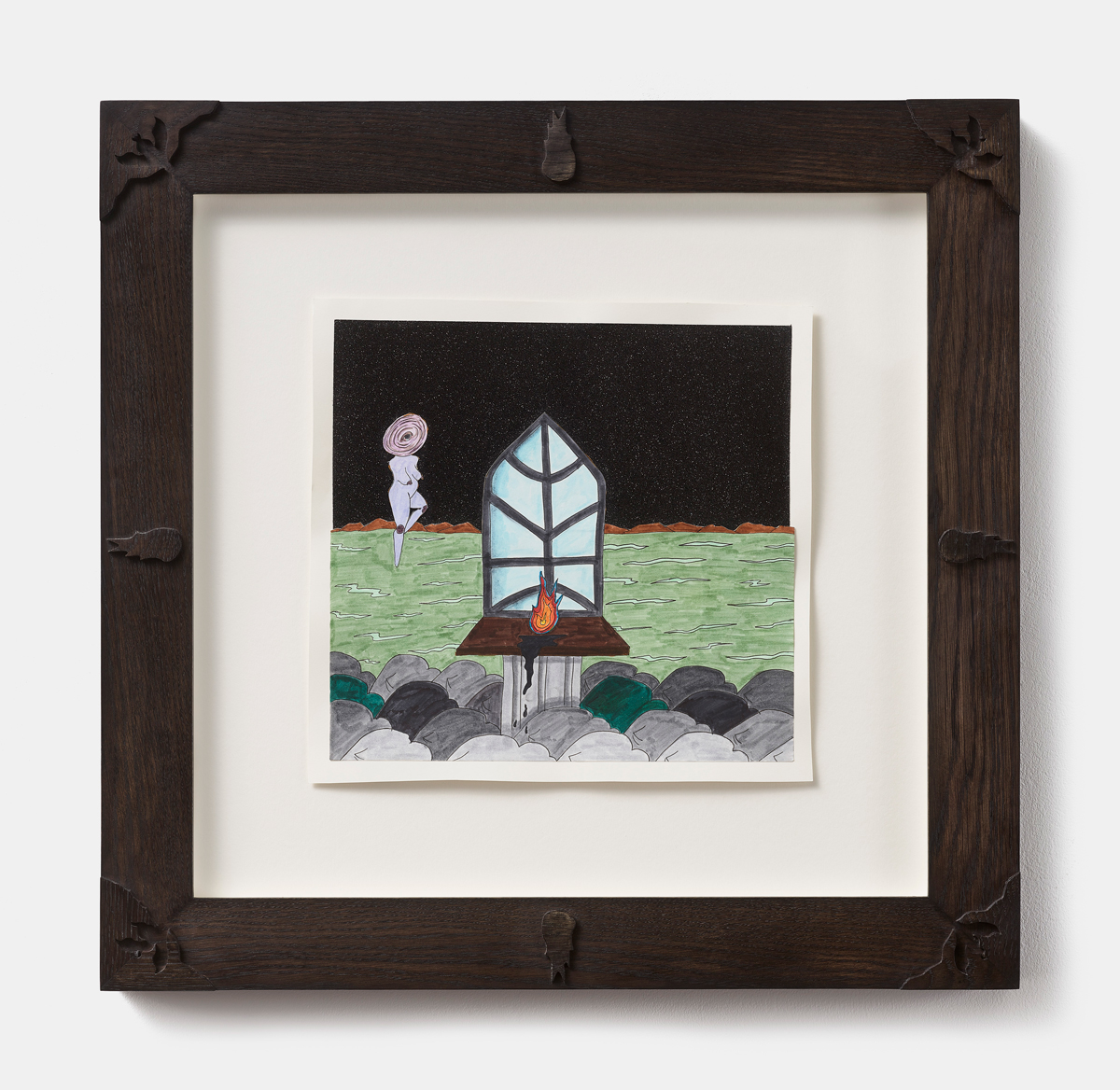 In this and the rest of the paintings and drawings on view, Smith’s improbable combinations of color, texture, and materials come through: she eschews pure color, it seems, so that every hue is a hybrid—reds are brickish, greens are limey or bluish. Muddy grays and brownish blues and orangey purples and brownish pinks abound. Glitter paper stands in for starry skies or tarry seas in works like how the light gets in (2022) and [Ruminations on] the joy fantastic (2022). In one of the drawings, [we be] spring from 2021, multiple, identical found photographs of a toothy mouth function both as monstrous flowers springing from foliage and a multiheaded vagina dentata guarding outspread, purple thighs. Flat plywood is painted to resemble fake wood paneling from the 1970s; polymer clay punctuates a surface that is obdurately lumber-like. While the paintings derive their sculptural heft by other means, the more delicate, two-dimensional drawings are given weight via the elaborately carved frames the artist has designed for them. 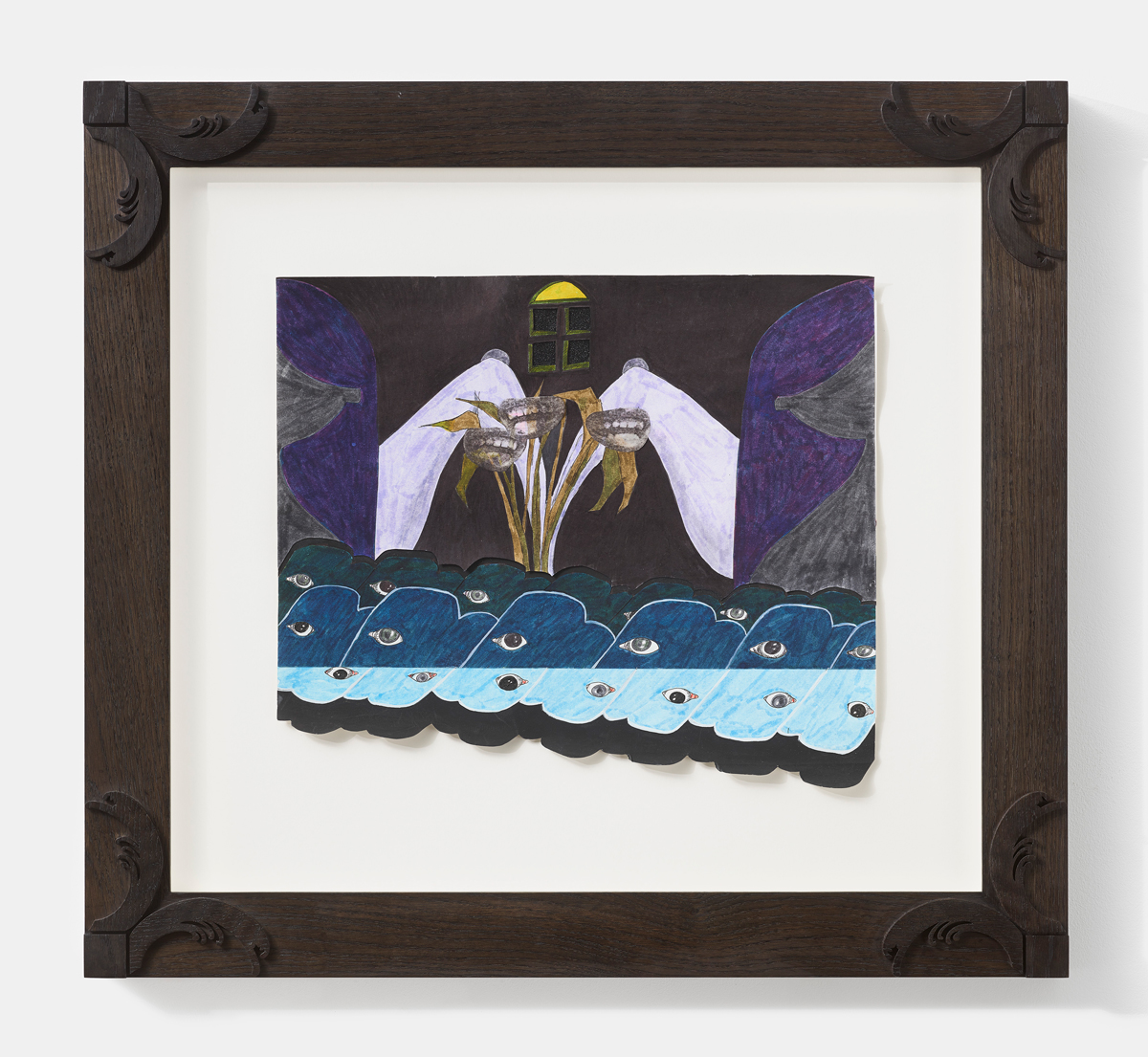 In their refusal of realism, Smith’s anarchic anatomies manage to communicate how strange being in a body is. The inspiration for these paintings allows those who cannot see to translate optical information into something haptic; the works themselves function in the opposite manner, providing people with a visual analogue of their somatic experience. It’s not simply the use of collage elements that creates such interplays between sight and touch, between what one sees and how one feels physically: the artist explodes the figure, recombining elements in ways that are not in fact uncanny but oddly familiar. I feel supremely at home here, in this place in which I am an arm and a leg and a breast out of place (Reverence to my Glories, 2022), or where my body is a tsunami and my nipple is a beacon of light pinched between aqueous fingers (Stars in my pocket, 2022), or where I am a pimpled cylinder who spews a fountain of green goo while my tits hang from the sky (Libations for soul wares, 2022), or where gender is alluded to (there are a lot of boobies on view) but never fixed or logical. 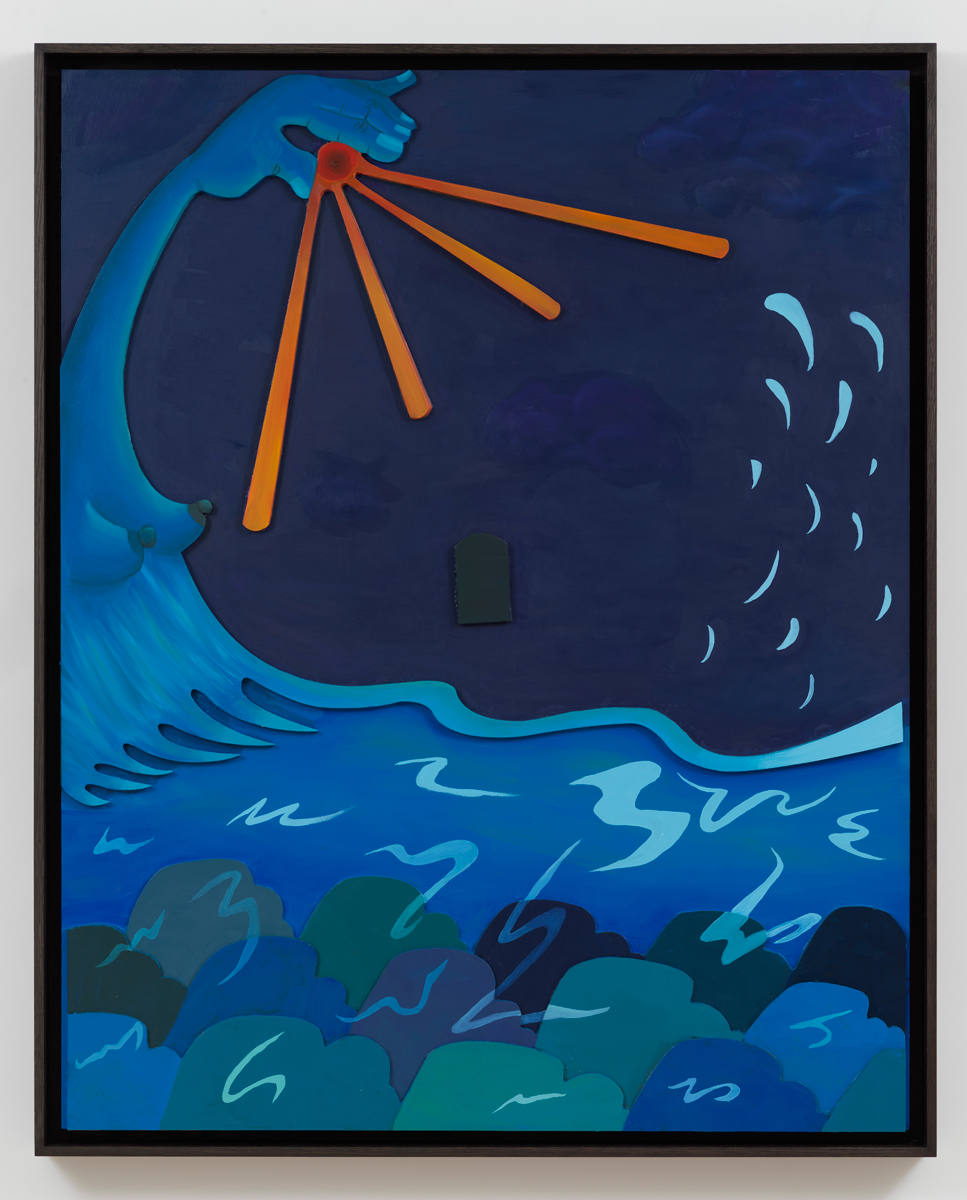 At the same time, whatever my personal, visceral response, the bodies here are more particularized—they are relatable, but not universal. Though their skin colors range from purple to gray to blue to green, there is a profound sense of Blackness at play—this is a Black queer femme future, in which creation and destruction happen without the presence of signifiers of cis masculinity. (In this way, Smith’s work is the antithesis of historical Surrealism’s approach to the body, such as Man Ray’s images in which he plays duck-rabbit with a female nude photographed so it looks like a penis.) Waves threaten to overwhelm, but also birth beings; landscapes are both post-apocalyptic and primordial; eyes bear witness and show tenderness. Everywhere you look there are doors and windows and other allusions to an architecture of entry and escape. Smith conjures a world in which hybridity and difference are at once the norm and the promised tomorrow, the catalysts of transformation—and asks us to imagine ourselves in their terms.

Aruna D’Souza is currently Edmond J. Safra Visiting Professor at the National Gallery of Art and a contributor to the New York Times and 4Columns. She is the editor of the newly released book on Linda Nochlin, Making It Modern (Thames & Hudson, 2022). She was awarded the Rabkin Prize for arts journalism in 2021.