In a show of forty sculptures, the artist creates a story of black classicism. 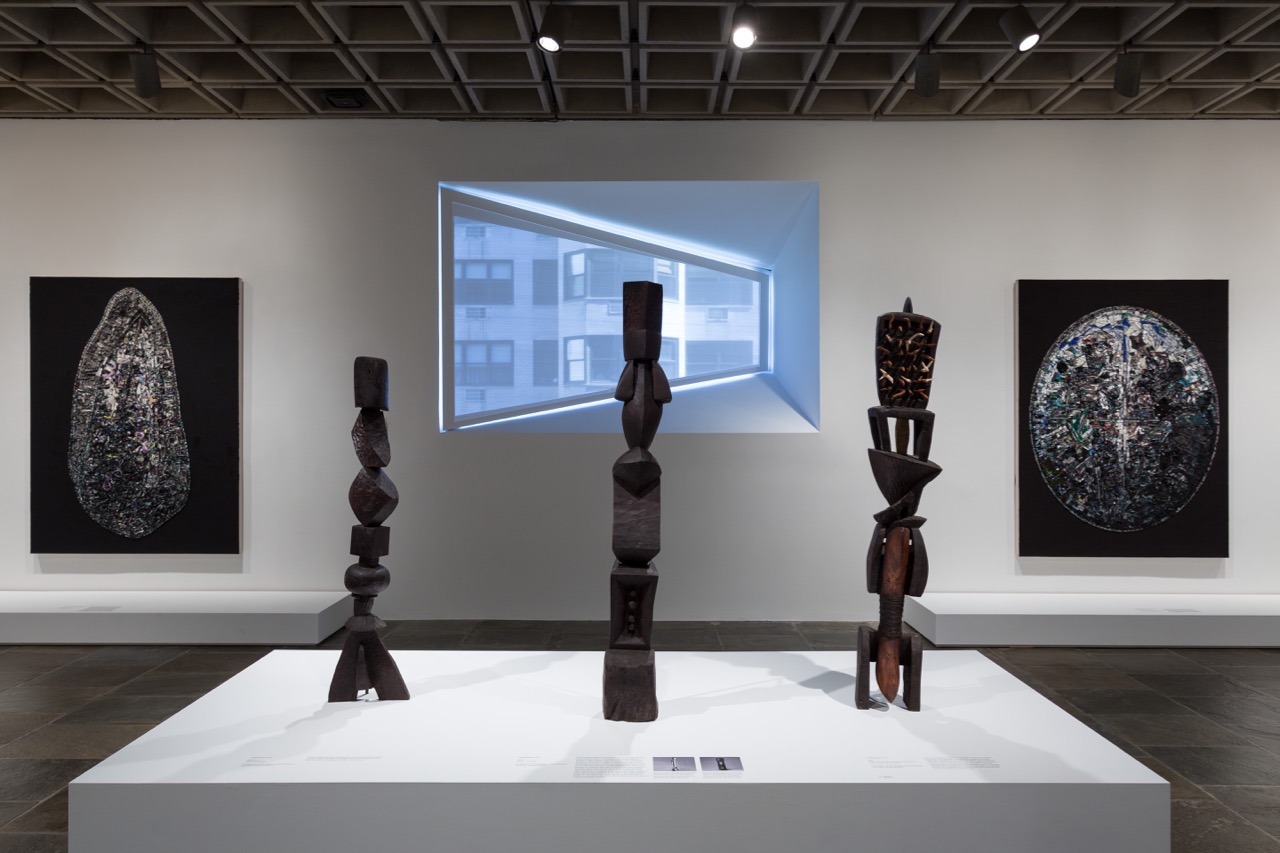 I quipped, when I stepped out of Odyssey: Jack Whitten Sculpture, 1963–2017, currently on view at the Met Breuer, that surely there must be a German word to describe the feeling of relief and pleasure that comes from looking at sculpture that engages the formal complexity of African art with as much sensitivity as a Picasso or a Brancusi but without all that pesky racism attached. And indeed, Odyssey demonstrates—refreshingly, importantly—how certain twentieth-century modernisms in the West could engage world cultures without casting them always and forever in the role of Other.

This was one of many revelations in a show that is full of them. Curated by Katy Siegel at the Baltimore Museum of Art and Kelly Baum at the Met, it is the first monographic exhibition of the artist in a New York City museum in thirty-six years. Rather than focusing on his abstract paintings, for which Whitten (who died early this year) is well known and much loved, though, it gathers forty of his sculptures—previously virtually unknown, except to a small circle of friends and curators—made mostly during his summers on the Greek island of Crete, starting in the late 1960s. These are installed alongside examples of the kinds of African, Cycladic, Minoan, Mycenaean, and African American vernacular objects that were the bases for his hybridized forms. Included too are his tessellated Black Monolith paintings, made between 1988 and 2017, homages to important individuals in black history and culture ranging from W. E. B. DuBois to Maya Angelou to Muhammad Ali; they were inspired, gestalt-wise, by a rocky outcropping in Crete, and give a hint as to how his private sculptural practice informed his work in two dimensions. 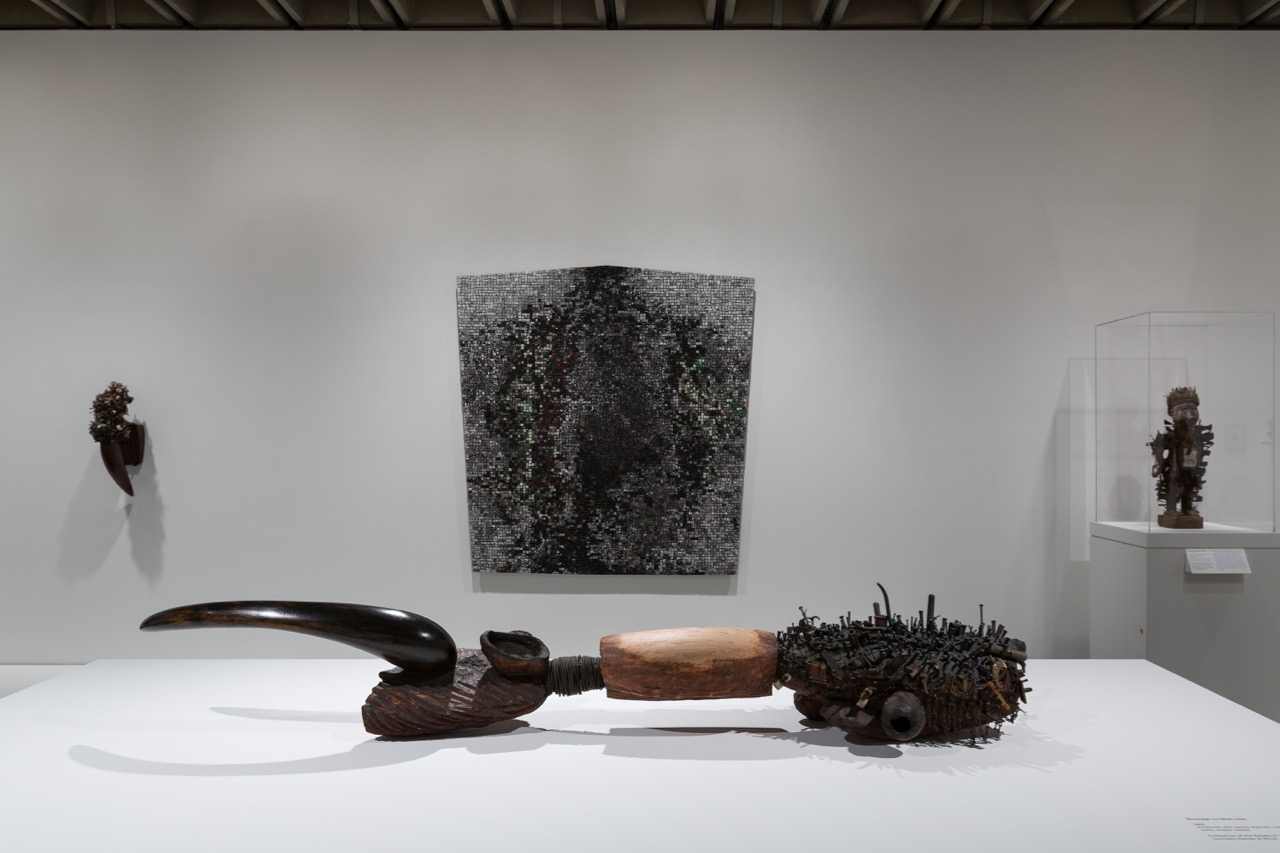 Whitten, alongside his peers Alma Thomas, Sam Gilliam, and Stanley Whitney, was one of a generation of painters who resisted calls by the Black Arts Movement in the 1960s and 1970s to make representational work that would directly aid the struggle for black liberation. While Whitten spoke of a “black sensibility” in his approach to abstraction—one that had to do with, among other things, his bricolage approach of “making do” with whatever materials were at hand, a feature of black material culture in the South—it is in his sculptural work that his engagement with blackness (as identity, as history, as culture) emerges most explicitly.

In fact, as this exhibition demonstrates elegantly, Whitten’s sculptures can be understood as a vector that links his pure painterly abstraction to a genealogy that moves from the ancient Mediterranean to sub-Saharan Africa to the American South. Of course it’s not coincidental that this temporal and spatial trajectory, in multiple directions and with many recursions, reflected Whitten’s own travels and dis- or relocations. But this ancestral mapping is not merely a function of the personal: in his three-dimensional work, Whitten was creating a story of black classicism that melded African and Western traditions to forge or make sense of the African American experience, one in which shattered narratives of identity and history must now be told differently. 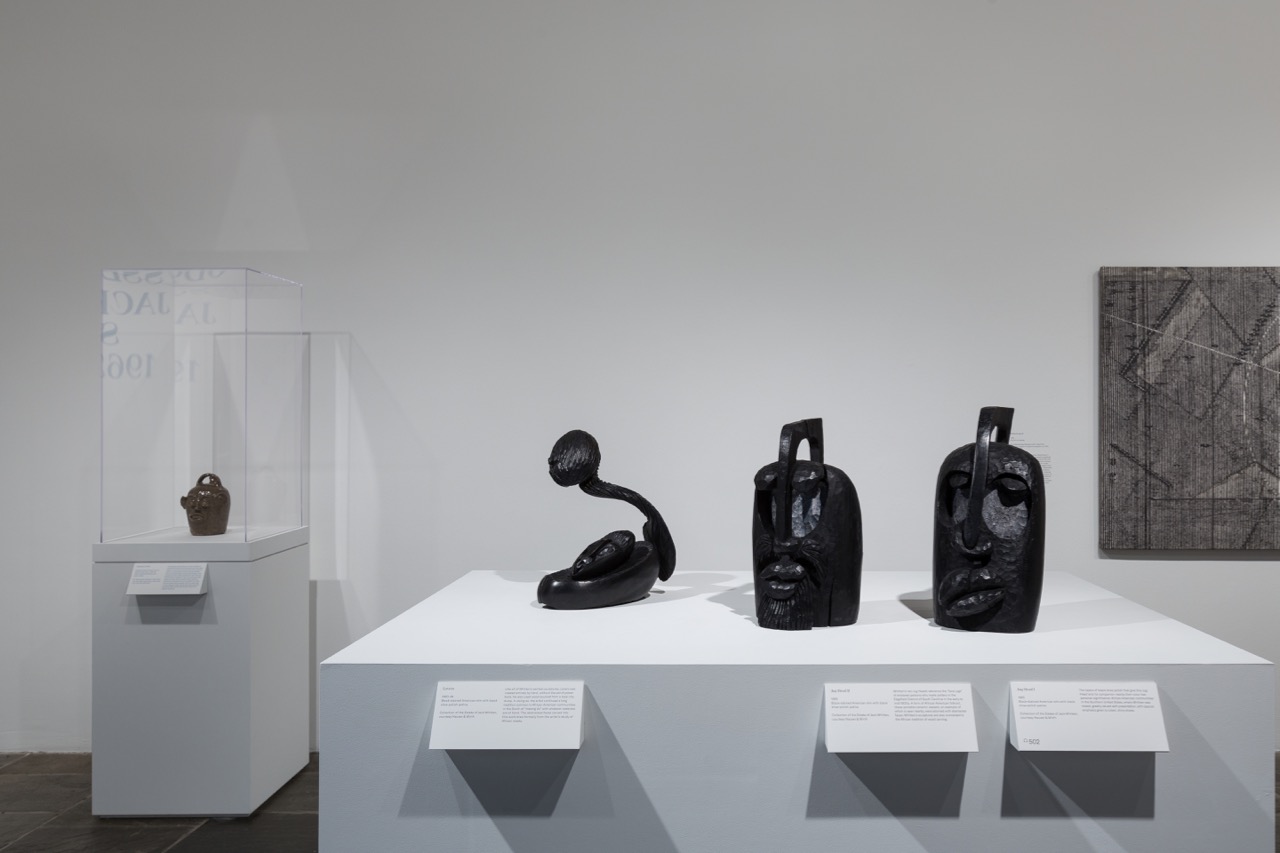 His earliest forays into the medium, made before his first travels to Greece and using tools borrowed from a classmate at Cooper Union, include works such as Jug Head I and II (both 1965), rough carved from discarded American elm and shone to a low gloss with black shoe polish. Spherical pupils project from ovals excavated from the elemental hunk of wood, lips protrude; one of the two has rough striations indicating facial hair. The forms and titles refer to ceramic jugs made by black artisans in the South in the nineteenth century (one of which is installed nearby).

Looking at these Jug Heads, it is clear that Whitten was learning the same lessons from African sculptures that Picasso had a half-century earlier. (Picasso had famously recognized the propensity of African mask makers to conceive eyes not as concavities of the face, but as cylinders that projected outward, reflecting their role as sensory tools; the Spaniard translated this observation, most famously, in his Guitar, 1912, a sculpture where the sound hole of the instrument is imagined as a jutting cylinder, not a cutout of a flat plane.) But Whitten was searching, he said, for a means to connect with African art in a manner that bypassed Picasso instead of going through him: “my way,” he wrote, “not Picasso’s European interruption.” 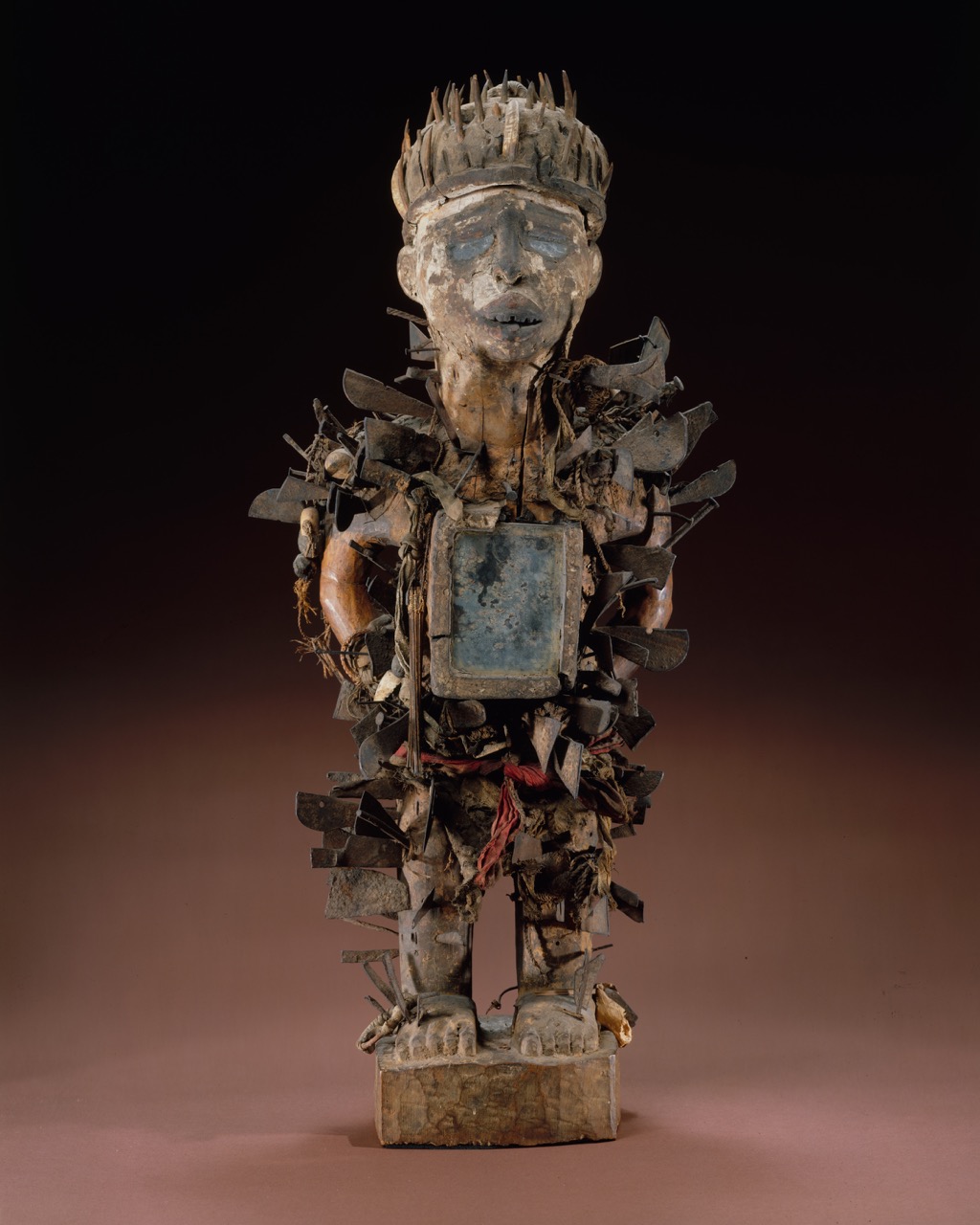 The route Whitten discovered involved a detour to archaic Greece, a Greece that predated the West: after 1969, when his annual travels to Crete commenced, he started to see African sculpture in relation to Minoan and Cycladic forms, noting a similarity in stylized geometries, in function (both practical and spiritual or ritualistic), and in use of resonant materials (bones, teeth, hair, recycled bits and bobs). 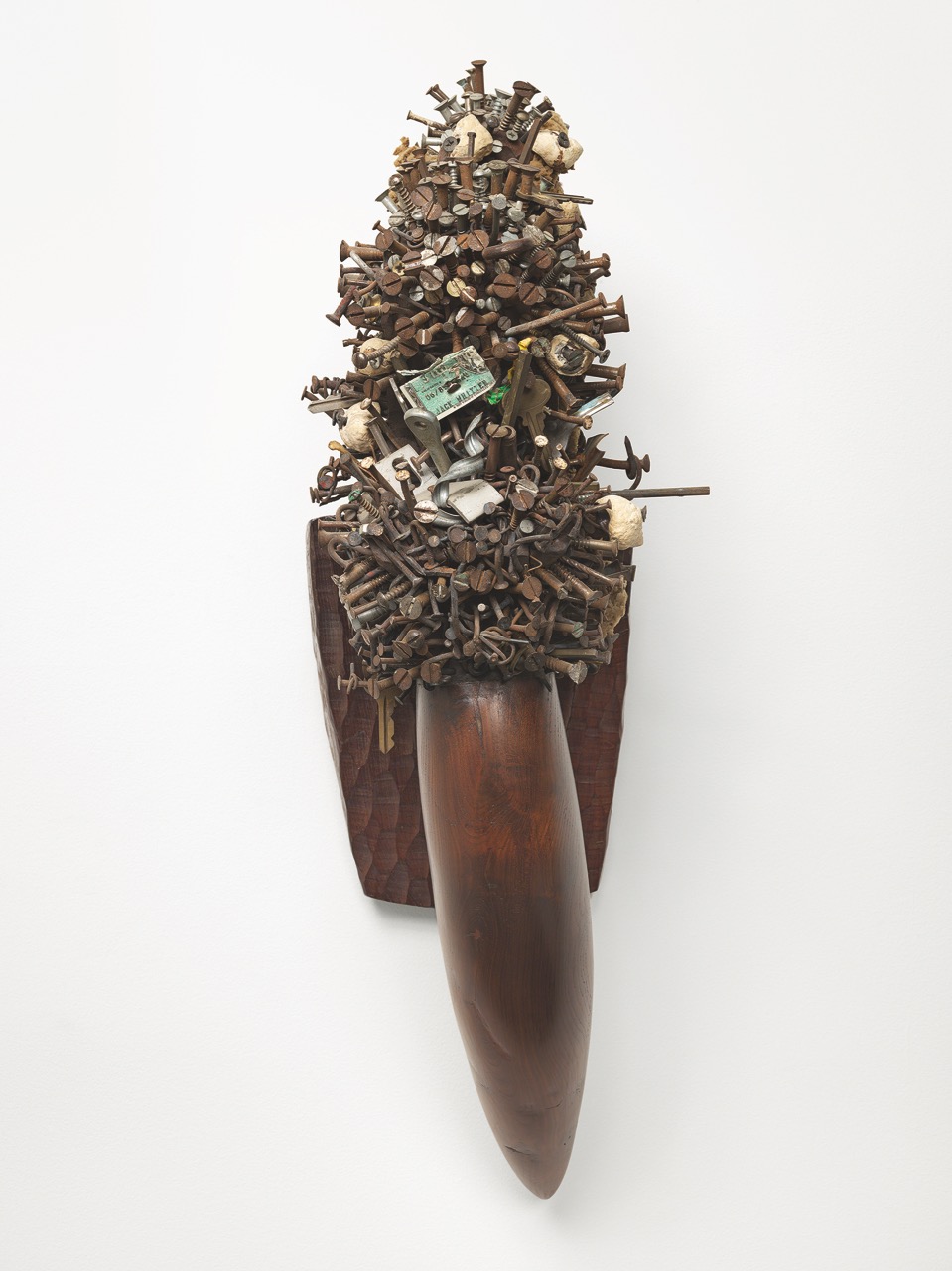 Works like Homage to the Kri-Kri (1985) demonstrate the fruits of Whitten’s rethinking of such genealogies. The title refers to a species of wild goat that roams Crete, whose lineage goes back to animals domesticated by the Bronze Age Minoans. The sculpture is made of a mulberry wood found on the island; a smooth, curved, horn-like form mounted on a striated square block may obliquely suggest a head and woolly coat. The horn-head is topped with a wonderful crown of stuff—nails, screws, hinges, seeds, bits of crusty paint, and even Whitten’s American Express card—evoking Central African nkisi power figures (a nineteenth-century version from the Kongo peoples is on display nearby). The stylized face of a doll made for his daughter Mirsini from Cretan walnut and mulberry (c. 1975) adopts the severe geometries of Cycladic figurative sculpture; the stance of the figure recalls, once again, the nkisi figures, and the arms-cum-handle conceit seems related to his Jug Heads, melding Greek, African, and American vernaculars within a single object. 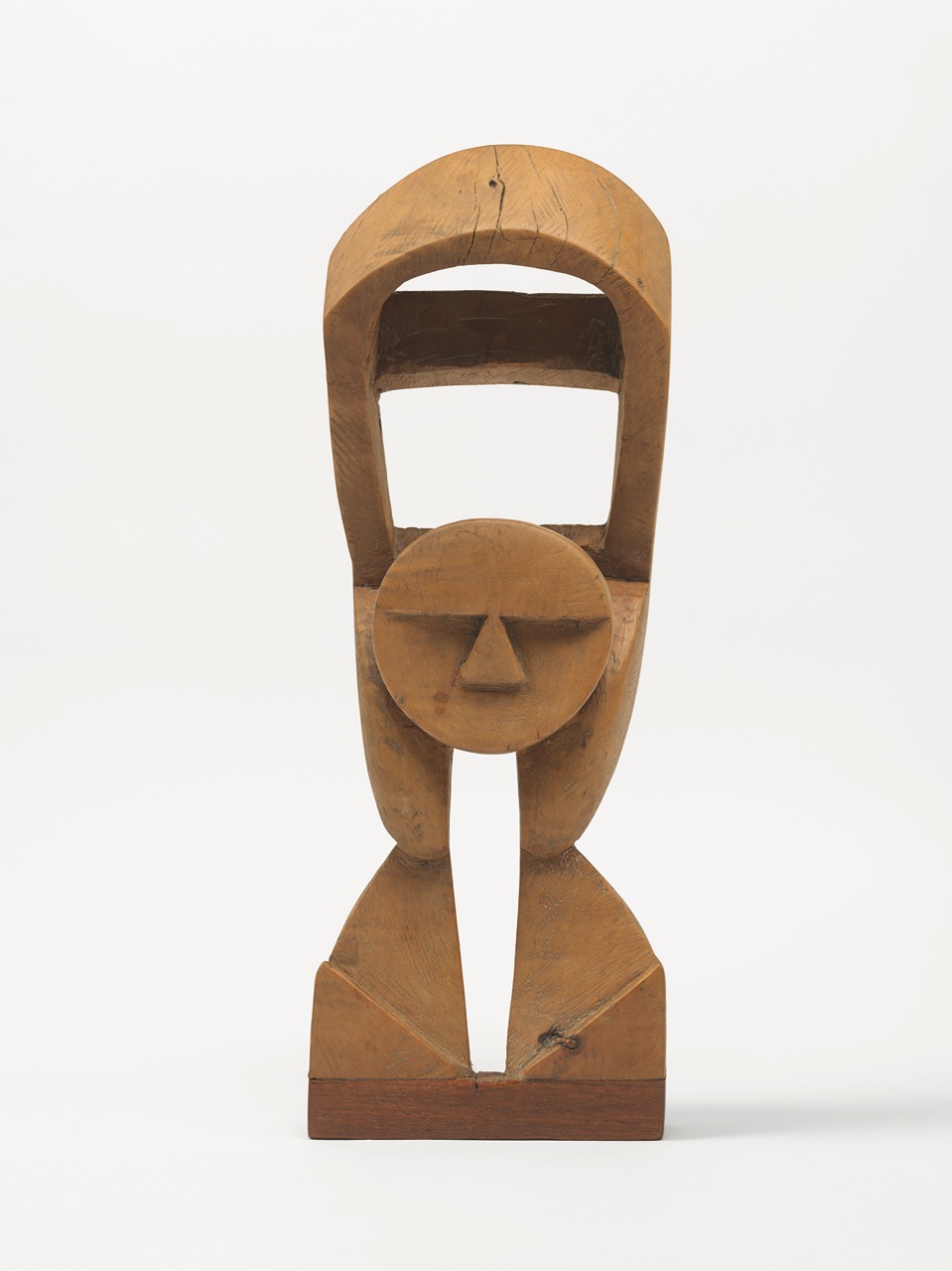 Whitten noted once that Crete was the dividing point between Europe and Africa, “the edge of the Western world”; he planted himself firmly at that intersection. From this vantage, the artist reconceived African art not as a primitive or “savage” style, as European and American modernists were wont to do, but as an archaic one—no matter that many of the objects he was studying were created not millennia but mere centuries ago. By recasting these traditions as archaic, he put them on equal footing with Minoan and Cycladic objects, objects that are understood to be distant ancestors of white European culture, produced in the cradle of Western civilization. Whitten wove these two historical threads into a vision of a black American culture that stretched back to the dawn of time—Africa and archaic Greece met, in his work, not in order to position one as an Other, but to imagine a black self that was entangled in many places and many moments, that was torn from and sutured back into an imagined history only by the force of creativity.