Afros, museums, solar flares: in her new show, the artist ventures
into collage. 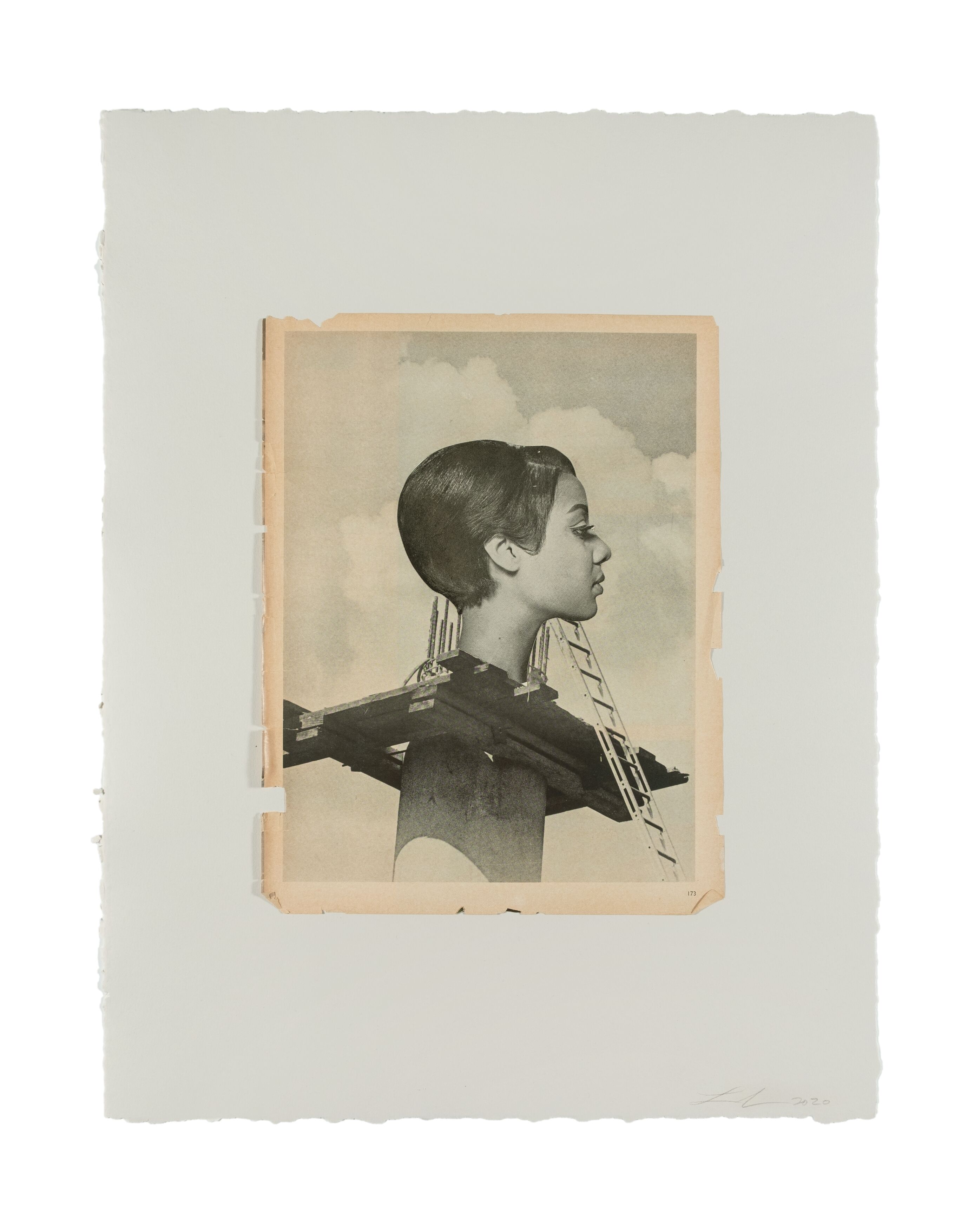 Lorna Simpson: Give Me Some Moments, Hauser & Wirth, online exhibition on view here, through December 31, 2020

It was not so long ago—appallingly recently, in fact—that European museums displayed the remains of African men and women in their galleries of human evolution, treating their history not as cultural but as natural, of the earth and the animals, even as they filled their walls with artistic treasures looted from the African continent by colonial armies. (Paris’s Musée de l’Homme was an infamous culprit, exhibiting the body of Saartjie Baartman, the so-called “Hottentot Venus,” until the 1970s, and only returning her remains to South Africa for burial in 2002.) Lorna Simpson’s new exhibition, Give Me Some Moments, available online via the Hauser & Wirth website, nods to those histories of museological display that consigned Africanness to the realm of natural history, and how they have implicated contemporary Black women in their racist assumptions across time and space.

After years of work in conceptual photography and video, often characterized by subtle and haunting reflections on gender, race, and the interior lives of Black women, Simpson has turned to collage to explore similar themes, taking up readymade text and images. Darkening, her acclaimed 2019 show at Hauser & Wirth, consisted primarily of large-scale paintings of arctic seas that layered found text and pictures, and a totem composed of hundreds of old issues of Ebony, an essential instrument for the positive self-representation of a newly emerging Black American middle class since the 1940s; she sources many of the photos in her collage-based work from the magazine.

The fifteen pieces in the current online exhibition—some single collages, others comprising multiple collages, often no bigger than around twenty inches along one side—were all made in 2019 and 2020 (three were created since the onset of the COVID shutdown). While these images differ from those earlier paintings in size and technique, they share a fascination with the way Black female subjectivity is defined and delimited by Western taxonomies, even in the most “objective” disciplines of geology and the earth sciences. How to see oneself fully and with love when the world of ideas and representations is so saturated with racist assumptions? The suturing inherent in the collage technique makes material, as Simpson puts it, how “the notion of fragmentation, especially of the body, is prevalent in our culture. . . . We’re fragmented not only in terms of how society regulates our bodies but in the way we think about ourselves.” 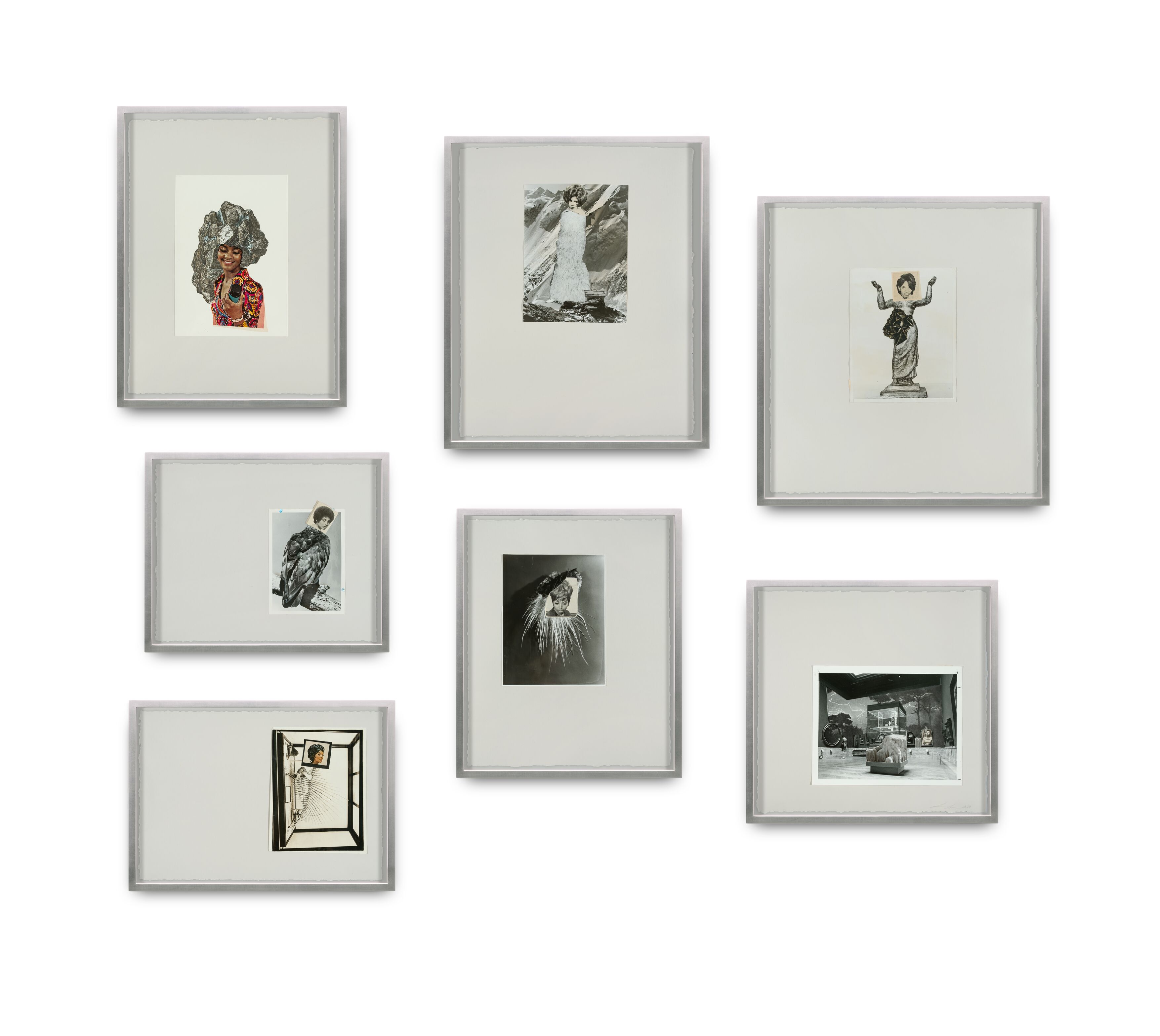 In one of the seven found photograph-and-collage elements that comprise *Adornment (2020), we are transported into the room of a museum—the sort of old-world, encyclopedic institution that might well have housed everything from ancient artifacts to medieval retables. But Simpson has replaced the upper walls of this gallery with an image of a lightning storm in a forest, dislocating this temple to culture by insistently dreaming it into nature. In the foreground, the lower half of a glass vitrine is filled with a pasted-in ice formation, and on the far wall, among the paintings on view, one glimpses an ornate, arched frame that holds a glamour shot of a stylish Black woman, her outfit and carefully groomed Afro dating to perhaps the 1960s. Even in the imperfect medium of online viewing, the scissor cuts of all these individual elements are visible—emphatic, even. Other panels that make up *Adornment show a bleached skeleton of a strange four-legged creature with a spiky row of bones emanating vertically from its spine, on display in a vitrine; a classical sculpture of a goddess with raised hands; an eagle perched on a rock; a snowy mountain escarpment with a geologist’s instrument box in the foreground. These found photos are embellished with the heads of Black models—often culled from wig and fashion ads clipped from old issues of Ebony and Jet. 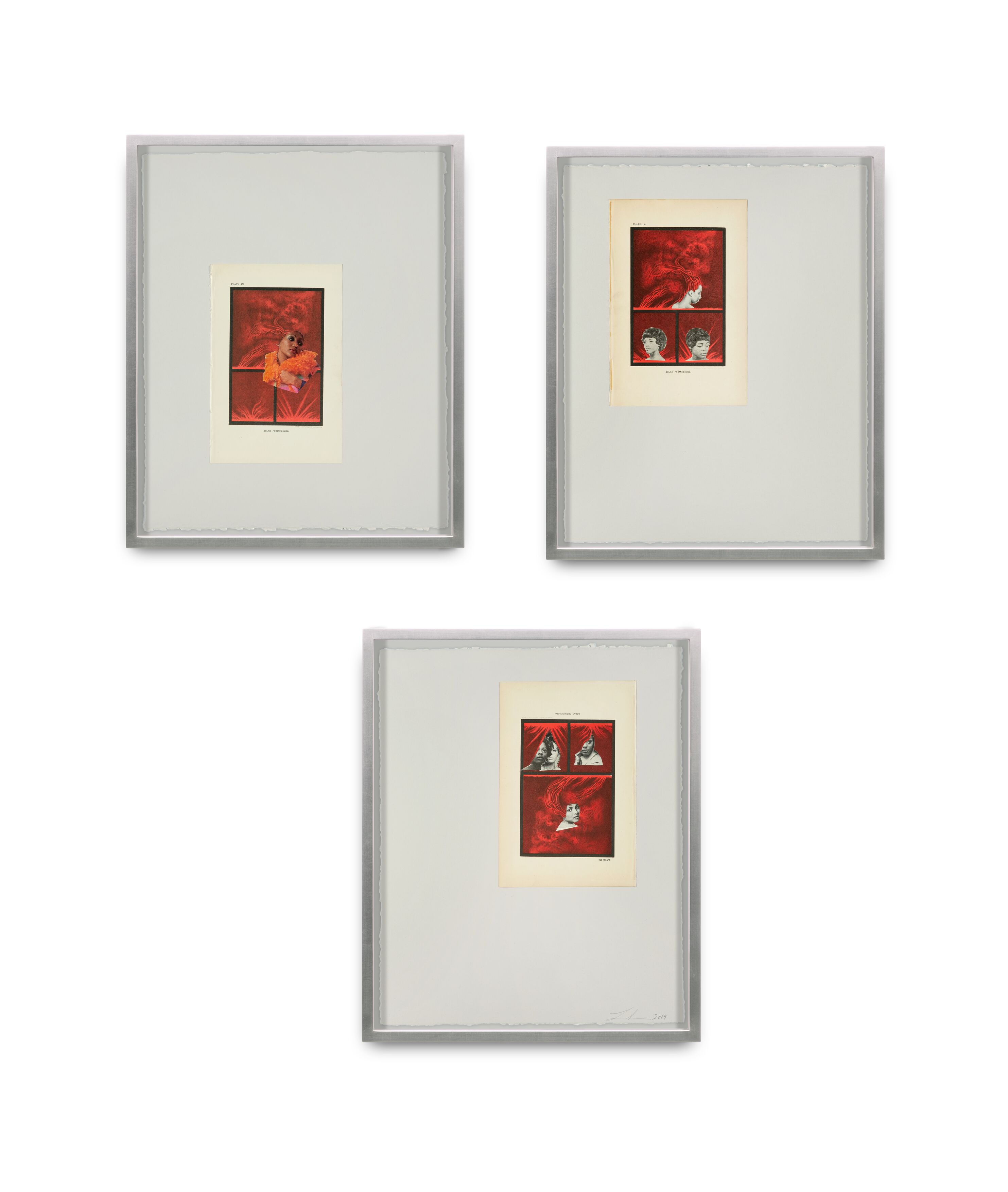 Similarly, in Solar, a three-part work from 2019, flares and eruptions on the sun’s surface, as illustrated in an old textbook or science magazine, become the lush hair or draperies of sultry female faces. Crystal formations function as fanciful headwraps in Illustration (2020); a star map sits atop the head of a woman in Lyra night sky styled in NYC (2020). In Solar Glare (2020), a single collage composed of two halves, we find a gorgeous model wearing a fantastically ruffled green gown whose sumptuous and flowing tresses are in fact a solar event; pasted next to her is a centerfold (you can see the staple holes from the binding) playfully perched on some lava rock, with a snippet of an astronomical study behind her. 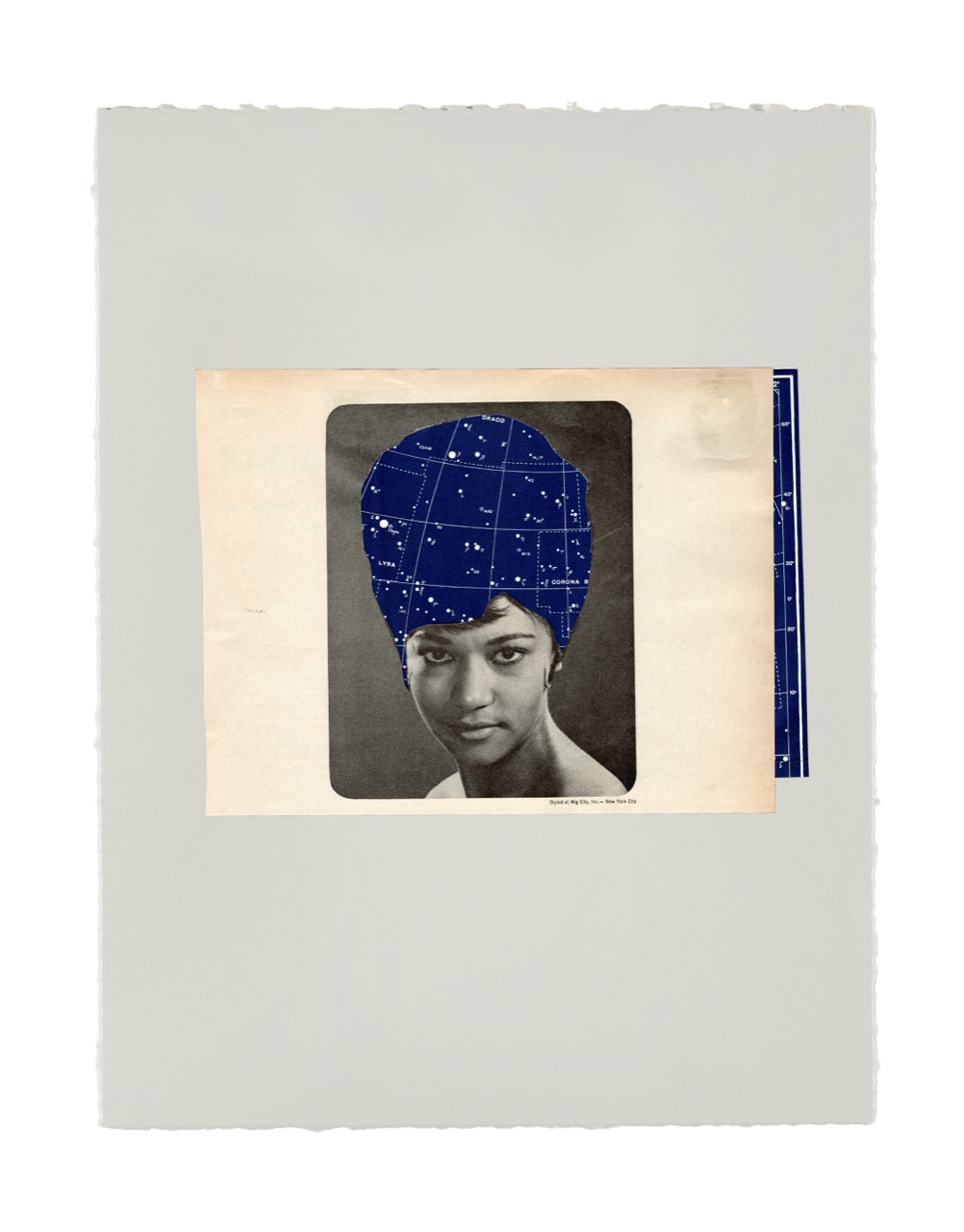 In these and other works in the show, the juxtapositions Simpson creates seem to erode the nature/culture divide that has been used to oppress Black women over centuries, recasting it as a vehicle for a kind of tender and surreal beauty—something wonder-ful. Natural phenomena are turned into chic clothes and headwear; Black women are turned into singular, otherworldly beings who can no longer be contained by the simultaneously strict and arbitrary categorizations white supremacy constantly imposes on every aspect of the universe, even those realms that would seem to have nothing to do with people as such. 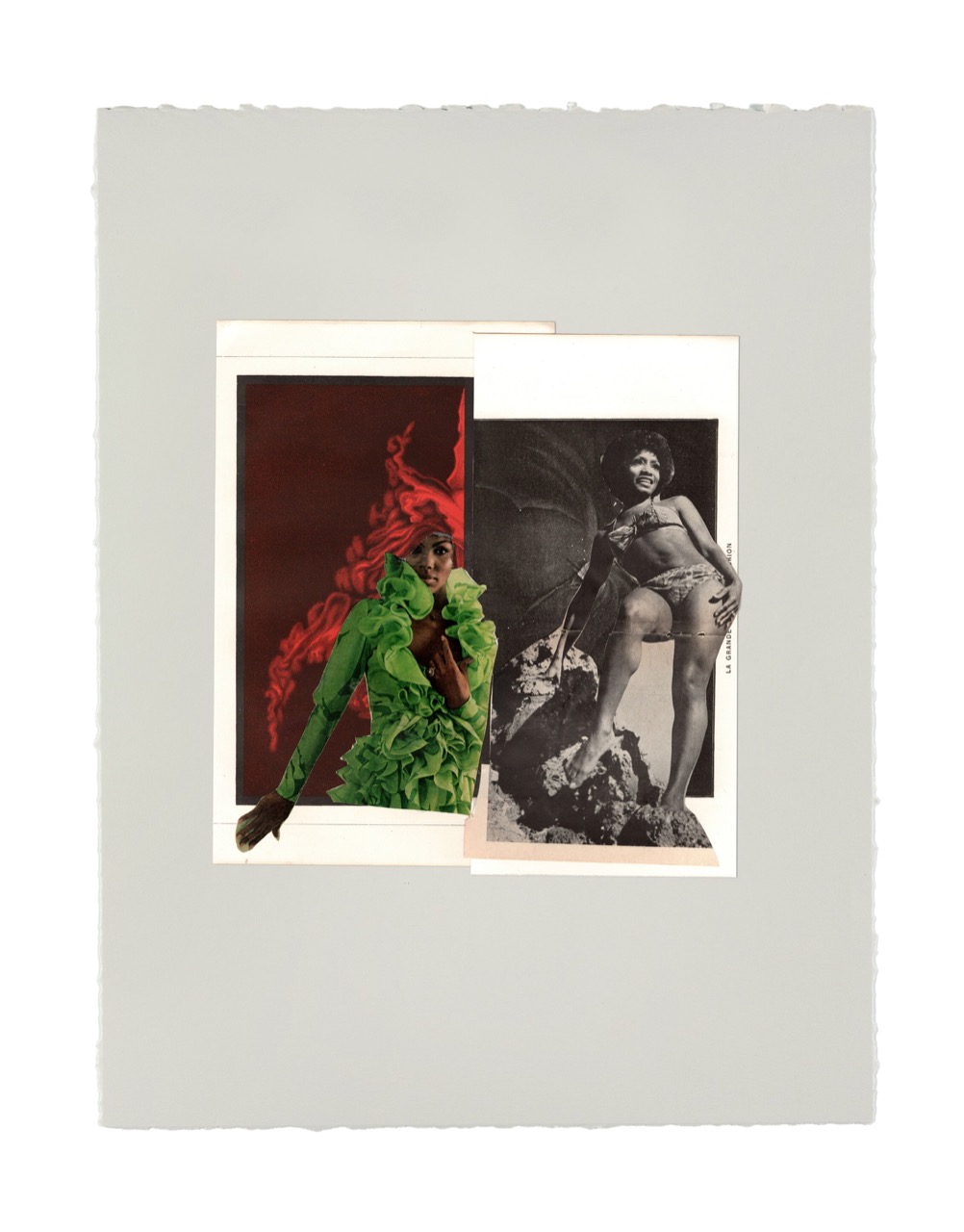 While Gatherings, a three-part piece, was made in 2019, it is impossible to read outside of the current concern with social distancing in the age of COVID-19. One component shows a group of neatly dressed Black men and women sitting in a tight circle on folding chairs while one of their members holds the floor. (This image, along with those in 2019’s Cowboy, are the only representations of Black masculinity in the exhibition.) In the background two ships, rendered in photogravure, sail through a narrow, craggy strait toward them. Given the history of maritime exploration and empire building—a history that includes the enslavement of human beings—the effect is vaguely foreboding. In another collage, a group of hard-hatted white men in white shirts and ties, seen from above, grasp the edges of a tarp, as if at an unveiling ceremony; their black-and-white photo is overlaid by a woman in profile, dressed in a fabulous spangled gown, set against a fire engine–red background. Her Black style stands in stark contrast to the generic, uniform whiteness of the image below. In the third part of the piece, people congregate—at a safe distance—on a frigid sports field; they seem to carry massive helium balloons (another collage element), while on high looms the oversized specter of a woman looking directly at the camera with an expression that combines allure and disdain, à la Manet’s Olympia. In all, the piece makes strange the very phenomenon of human congregation, giving it a sinister, menacing air. If not for missing out on the material experience of work like this, maybe I’m better off seeing it at home?