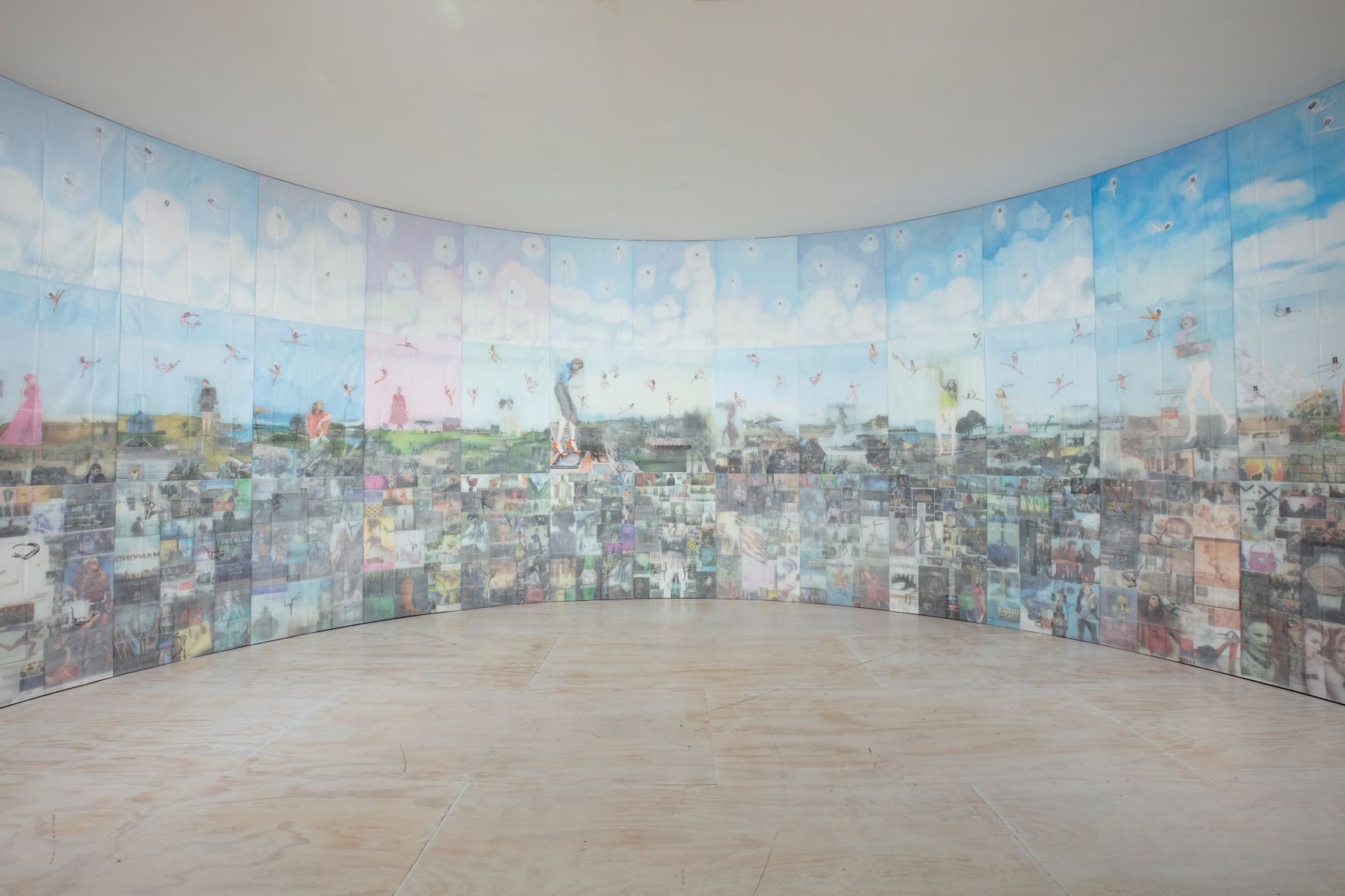 One of the most striking works in the exhibition Marking Time: Art in the Age of Mass Incarceration is a fifteen-by-forty-foot mural painted on thirty-nine bedsheets mounted to the wall. The top register of this makeshift canvas depicts a clear blue sky dotted with angel-like figures rendered in gouache and colored pencil; the middle register shows a distant landscape with burning buildings, oversized women, and a giant Warhol soup can; the bottom is dense and dark, crowded with blocks of ghostly images. Those images are in fact found photos and text from books, magazines, and newspapers that have been transferred, Rauschenberg-style, to the sheets, using hair gel and a spoon. If the painting is a depiction of heaven, earth, and hell, this is a hell filled with war zones and political protests and human suffering and dictators and Beyoncé and Degas and Jean-Michel Basquiat and Velázquez and Chanel clothes and Patek Philippe jewel-encrusted watches and Christie’s auction catalogs and—because what would hell be without him—Donald Trump.

The artist who made this work, Apokaluptein 16389067 (2010–13)—Jesse Krimes—did so while he was incarcerated. The sheets that served as Krimes’s canvas were manufactured under the auspices of UNICOR, a forced-labor program that pays negligible wages. He worked on one sheet at a time over the course of three years, clandestinely transporting each out, once painted, via mail; it was only upon his release in 2014 that he was able to see them all pieced together. As the rest of us argue over whether this or that blue-chip artist is being censored or limited in their artistic freedom, thinking about the conceptual and material inventiveness of Krimes’s work, and the literal loss of freedom that might have resulted if his activities had been discovered, is appropriately humbling.

Guest curated by Dr. Nicole Fleetwood, and accompanied by a book of the same title published by Harvard University Press, Marking Time: Art in the Age of Mass Incarceration is the result of Fleetwood’s long engagement with artists working in and out of prisons around the country. The exhibition goes well beyond showing us the talent that exists among those currently in correctional institutions (nearly 2.2 million, an inordinate number of whom are Black and Latinx) or demonstrating the resourcefulness of people who are living in the most debasing conditions in expressing their humanity and creativity, although it does do both. More importantly, by including currently incarcerated artists, formerly incarcerated artists, and artists who have never been incarcerated but whose work has engaged with this issue, it is designed to demonstrate that there is no inside and outside when it comes to mass incarceration. While it is shocking that the US imprisons people at a rate five times higher than the rest of the world, even more stunning is that the number of people who have formerly been in prison, have been convicted of a felony, have a criminal record, or have an immediate family member who has ever been imprisoned is 213 million—which means that two-thirds of the US population is directly caught up in the carceral system. 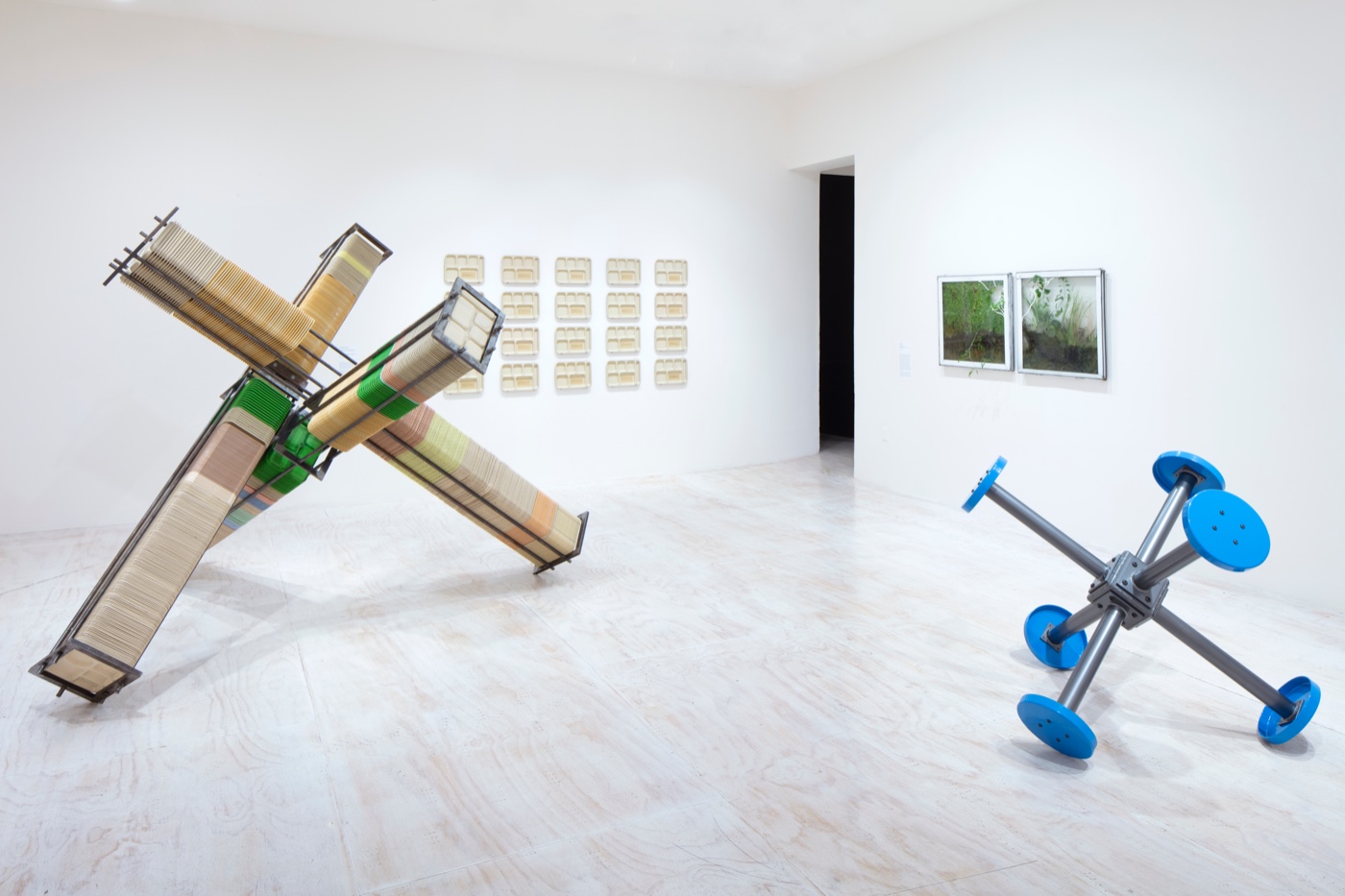 This expanded view of incarceration’s impact is poignantly addressed in Sable Elyse Smith’s Pivot I (2019). Smith’s father has been in prison since she was ten. A wall label notes that she was never allowed to wear the color blue when she visited him because it represented unfreedom—the color of police uniforms, her father’s state-issued clothing, and prison furniture. Her work asks us to reflect upon the ways the color can be reclaimed to signify freedom: the vast sky, often unseeable by people like her dad, or the sea, or the blues (as in Black music and aesthetics). With Pivot I, Smith transforms six cobalt stools, usually bolted down to the floors of oppressive prison visiting rooms, into an oversized play object: a multipronged starburst connected by a gray cube at the center, like something a child might make with her Tinkertoys. 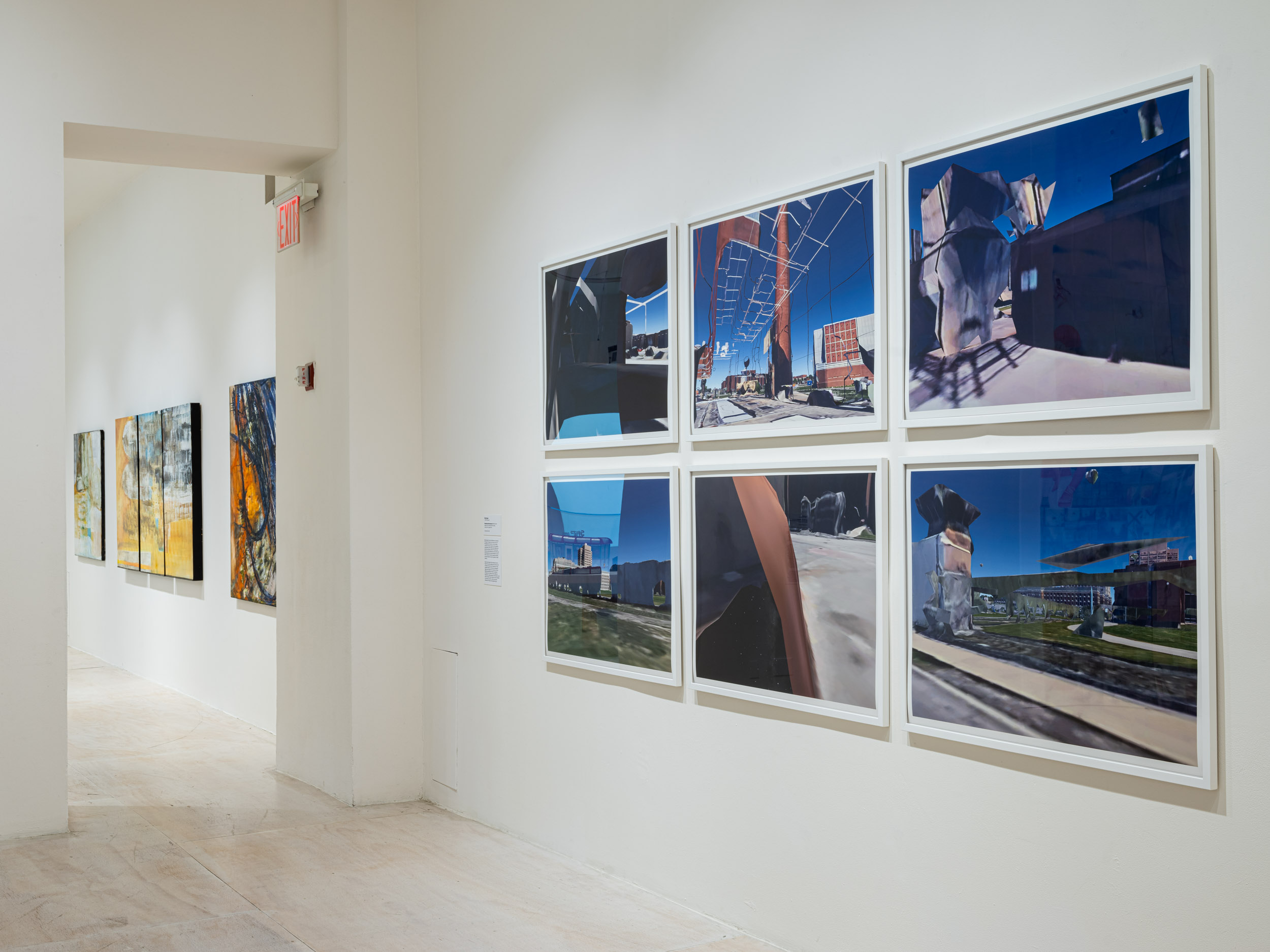 Marking Time’s critical approach to “inside” and “outside” complicates questions of “guilt” (and therefore deserving of imprisonment) and “innocence,” too. In her book, Fleetwood notes that she chooses not to disclose the reason for the artists’ incarceration (unless they specifically request it) because definitions of criminality are mutable and socially and politically constructed. The gap between “incarcerated” and “guilty” is underlined by Maria Gaspar’s inkjet prints of a Google Earth tour of Chicago’s Cook County Jail, whose largely Black inmates have been detained not because they’ve been convicted of a crime, but because they cannot afford cash bail (Wretched and Paramount I to VI, 2014–16). American Artist’s I’m Blue, 2 and I’m Blue, 3, both from 2019, nod to the mechanisms of criminalization and the question of who is culpable and who is victimized. The artist mounts police ballistic shields to the front of school desks and fills the desks’ wire baskets with books, mostly written by retired officers, addressing how hard police work is on their emotional well-being; the piece suggests the ways in which we are indoctrinated to sympathize with members of a system that perpetrates violence on Black and brown communities in the name of law and order. Meanwhile, Jared Owens’s triptych Ellapsium: master & Helm (2016) includes an abstracted but unmistakable rendering of a famous 1788 image of Africans imprisoned in the hold of a slave ship; next to it, The Go Back (2020) incorporates a found piece of signage that he has modified to read something like “40 acres / 40 years / Classic.” The references to slavery, and the idea of prisons as a new form of plantation—or as the New Jim Crow, as legal scholar and civil-rights lawyer Michelle Alexander puts it—point up how incomplete the project of emancipation is. 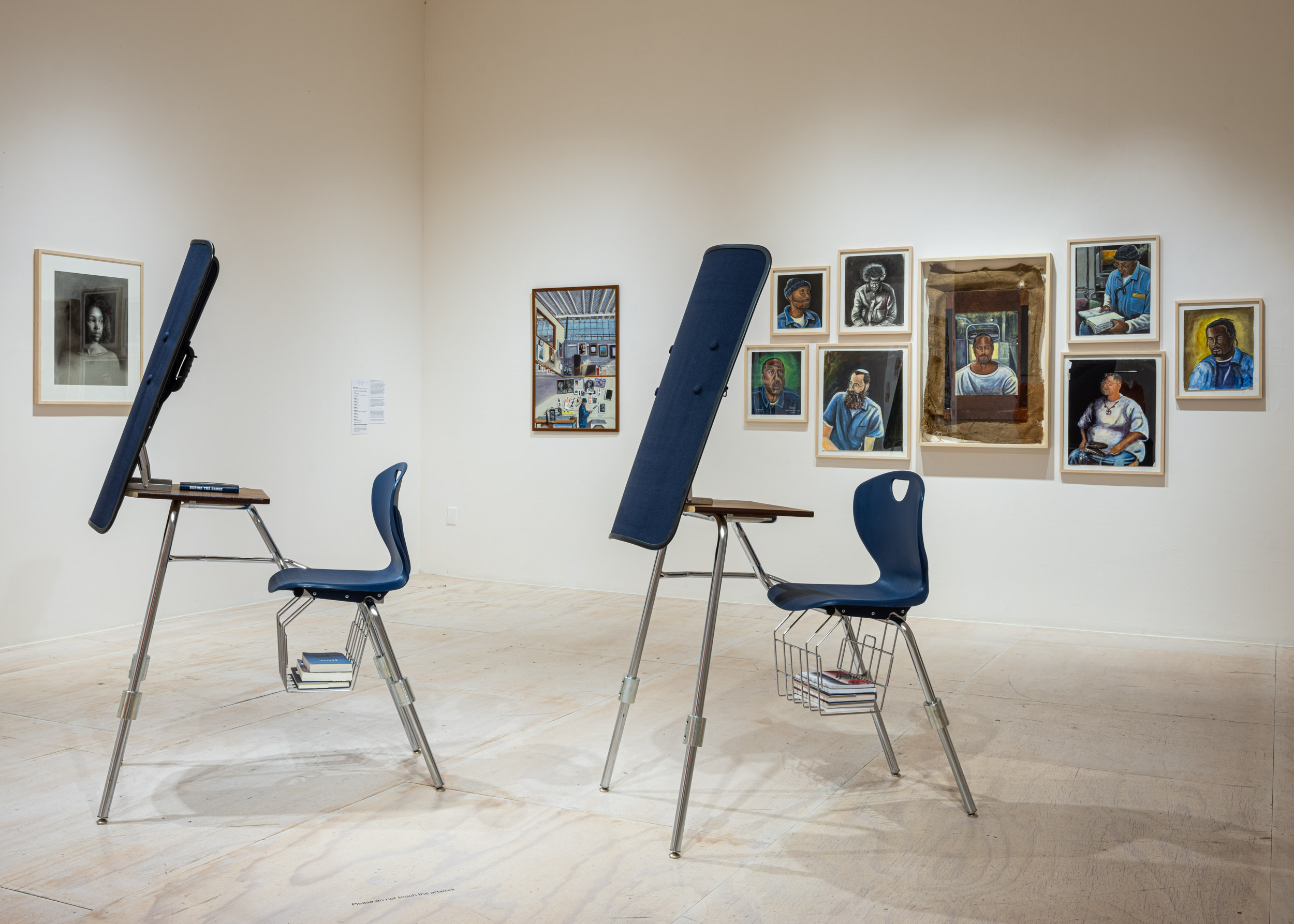 The conceptual and formal sophistication of the work on view is no great surprise; most of the incarcerated artists here are trained in some fashion, before, during, or after serving their sentences. These are not, in that sense, “outsider” artists except in the way they have been isolated from the larger art world by the fact of incarceration itself. The point is driven home explicitly by the inclusion of correspondence between the artist Billy Sell (who died while in solitary confinement in 2013) and his art tutor Treacy Ziegler, in which the two discuss his aesthetic and emotional concerns. But it appears elsewhere, too: the covers from museum exhibition catalogs that Krimes uses in his work; the Old Masters–inspired technique of George Anthony Morton’s portrait drawing (Mars, 2016), which won him a prize from the Florence Academy of Art, where he studied after his release; the 2008 acrylic-on-canvas painting of San Quentin’s art studio depicted by Ronnie Goodman; or the pages from art-history textbooks collaged onto the surface of Russell Craig’s massive Self Portrait II from 2020. 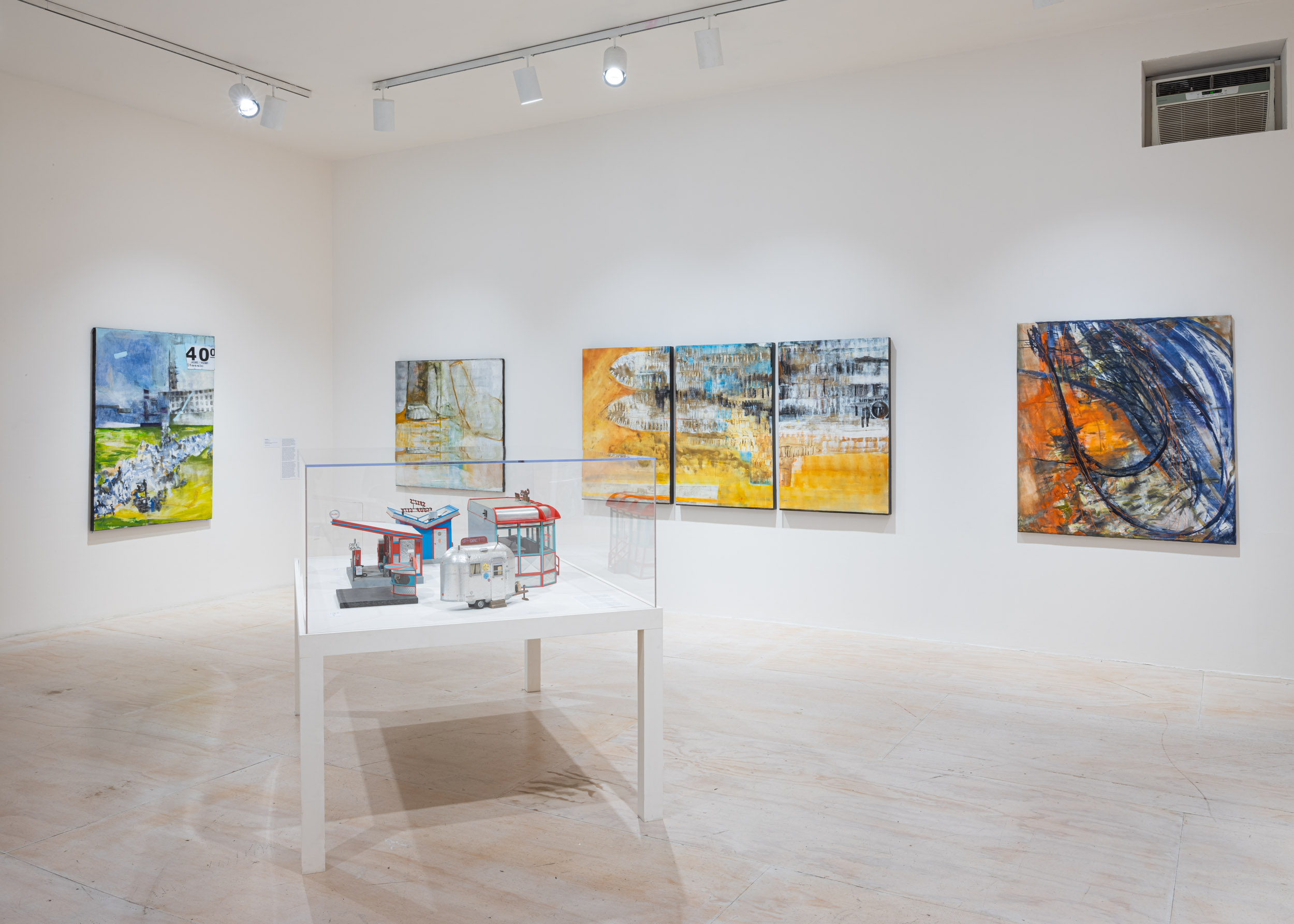 If the discipline of art history and studio art training are self-reflexively present in Marking Time, the framing conditions of the museum are, sadly, not. The opening wall text of the exhibition lists the many organizations and activist groups that participated in realizing the show—including the Art for Justice Fund, a philanthropy devoted to ending mass incarceration established by MoMA PS1 board chairperson Agnes Gund. But nowhere is there mention of how museums are funded from the profits generated by the prison system—museums including MoMA, where Larry Fink, chairman of BlackRock, an investment firm that is a major shareholder in for-profit prisons and ICE detention centers, sits on the board.