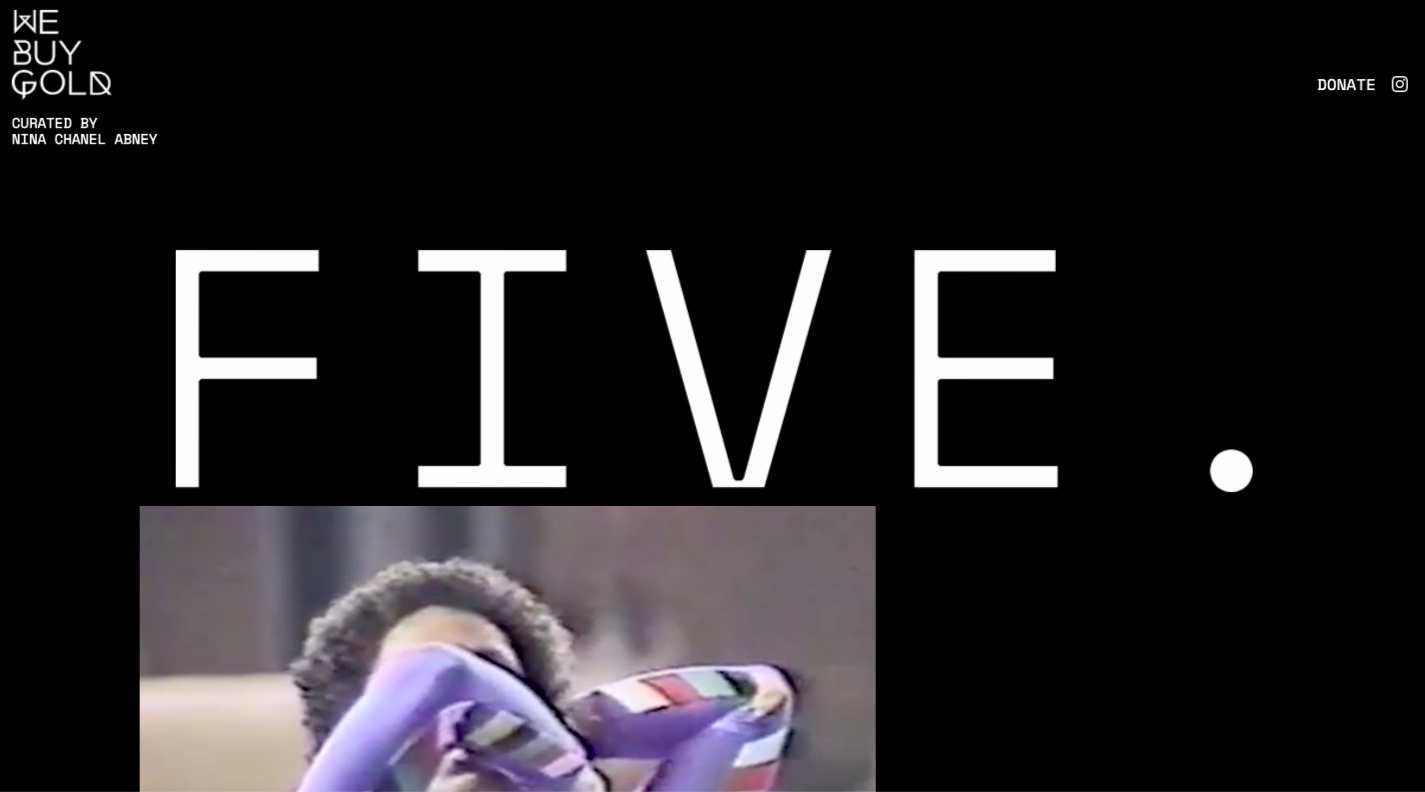 Screenshot of the homepage for FIVE. Image courtesy We Buy Gold.

We Buy Gold, the brainchild of gallerist Joeonna Bellorado-Samuels, is predicated on nimbleness and mobility in the face of rapidly changing urban conditions. The gallery exists as a pop-up—it’s roved from empty storefronts in Bed-Stuy, an area in Brooklyn that has become almost unrecognizable over the past few years thanks to the influx of white people and their money, to Manhattan’s Chinatown, another gentrifying neighborhood. Its name alludes to the culture and economy that preceded such a transformation—and to what persists and resists despite that influx. Some of the hottest figures in the contemporary artworld, including Torkwase Dyson, Alexandra Bell, Sam Vernon, Nontsikelelo Mutiti, and Ja’Tovia Gary, have participated in shows at We Buy Gold; Solange Knowles famously held a surprise book signing there.

With FIVE., an exhibition curated by Nina Chanel Abney in close conversation with Bellorado-Samuels, the gallery moves to yet another exhibition site—that of virtual space, a necessary concession to social distancing in the midst of a pandemic that has inordinately affected Black New Yorkers and other communities of color. In response to this disaster—one of many forms of systemic violence against Black people in this country, as the recent murders of George Floyd and Breonna Taylor by police remind us—Abney and Bellorado-Samuels have assembled video works by eleven artists that, per the gallery’s informal project statement, tap into the “anxiety, stillness, isolation, escapism, and fear” that this moment engenders. How to grieve for lost friends and family, how to organize, how to work, how to survive economically and spiritually, how to gather when one’s only possibility for collectivity is mediated through the screen? And given these limitations, Bellorado-Samuels writes, “How do we simultaneously celebrate Black life and consecrate Black death?” 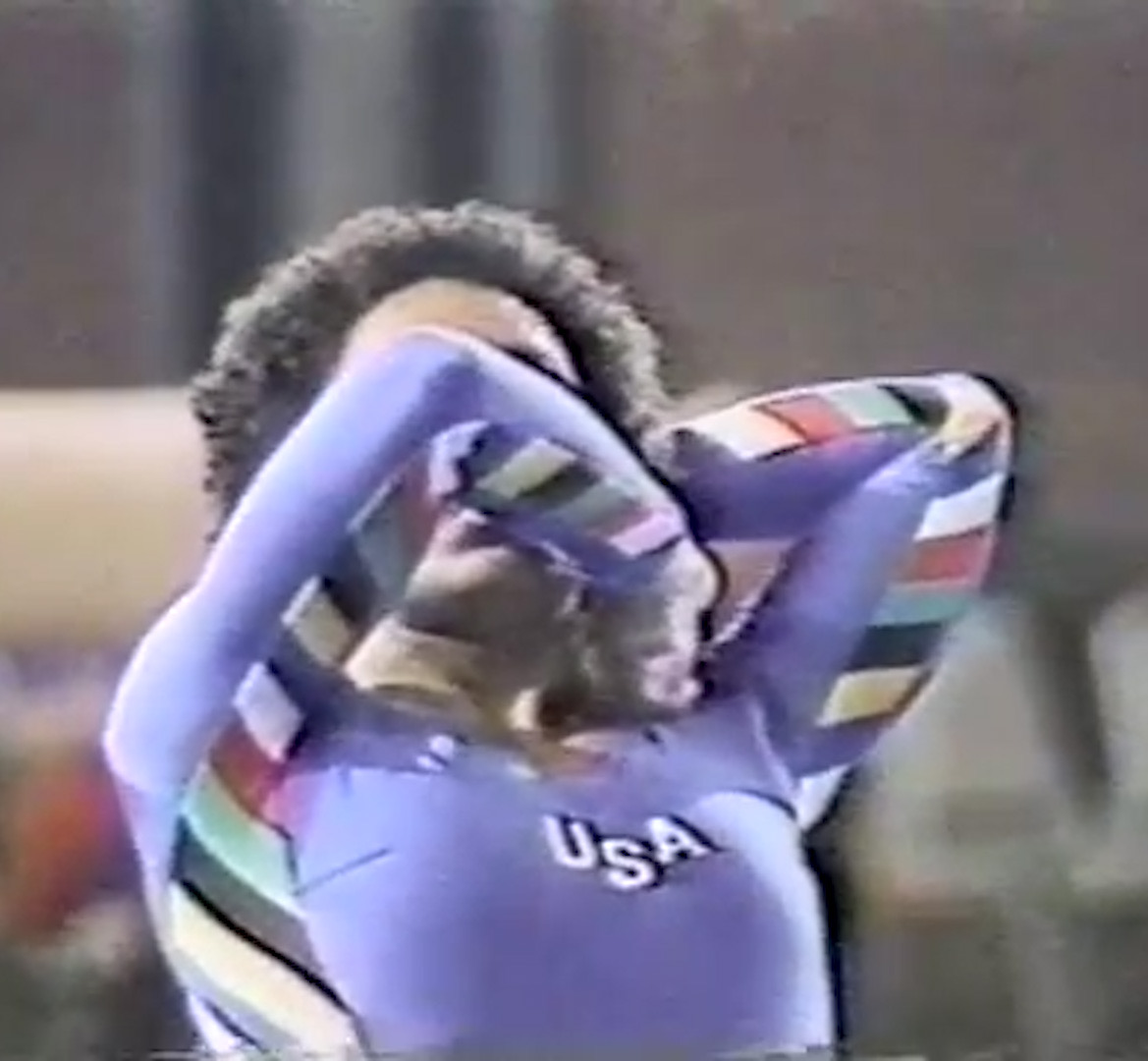 Only one of the works in the show addresses the COVID shutdown explicitly—Elliot Reed’s Quarantine Ballet (2020), in which he, Zach Nicol, and Joelle Mercedes appear in separate panes that evoke a group video chat creating an improvised choreography, moving their socially distant bodies in relation to a manipulated musical track and to one another. Other works function less as responses than as means by which to process, understand, and frame—or reframe—our current and ongoing crises. This is especially true of the first piece in the show: Thenjiwe Niki Nkosi’s Suspension (2020), an almost-seven-minute digital video scored with music by Nonku Phiri and Dion Monti. The work extends the artist’s paintings of elite gymnasts by stitching together television footage of Black and Brown athletes in the seconds before they must perform in competitions that are largely hostile to their presence. (The penalization of Simone Biles, the most decorated gymnast of all time, for performing a dismount deemed beyond the capability of her competitors in 2019 speaks to the white supremacy at the heart of the sport.) But it is the young women’s persistence and striving for excellence that is key here. The range of emotions expressed on their faces and in their body language (excitement, nervousness, fear, determination, focus, joy, and many other unnamable or untranslatable states besides) is augmented by uncertainty about the future. All we see is the buildup; what comes next—whether it is triumph or defeat—remains unknowable, out of reach.

Sondra Perry, who has three works in the show, has spoken about her interest in “how blackness shifts, morphs, and embodies technology to combat oppression and surveillance.” This agility is hauntingly apparent in Double Quadruple Etcetera Etcetera I & II (2013), an eerily silent two-channel video loop. On adjacent screens, two performers (the artists Danny Giles and Joiri Minaya) dance, each against the corner of a white-painted room. Using the content-aware patch tool in Photoshop (which enables the removal of unwanted elements from images), Perry has covered over almost all of their bodies. Flashes of brown skin and the constant presence of braided hair keep the performers from dissolving into pure abstraction. But they elude identification—we cannot see them even as we cannot tear our eyes away from them. 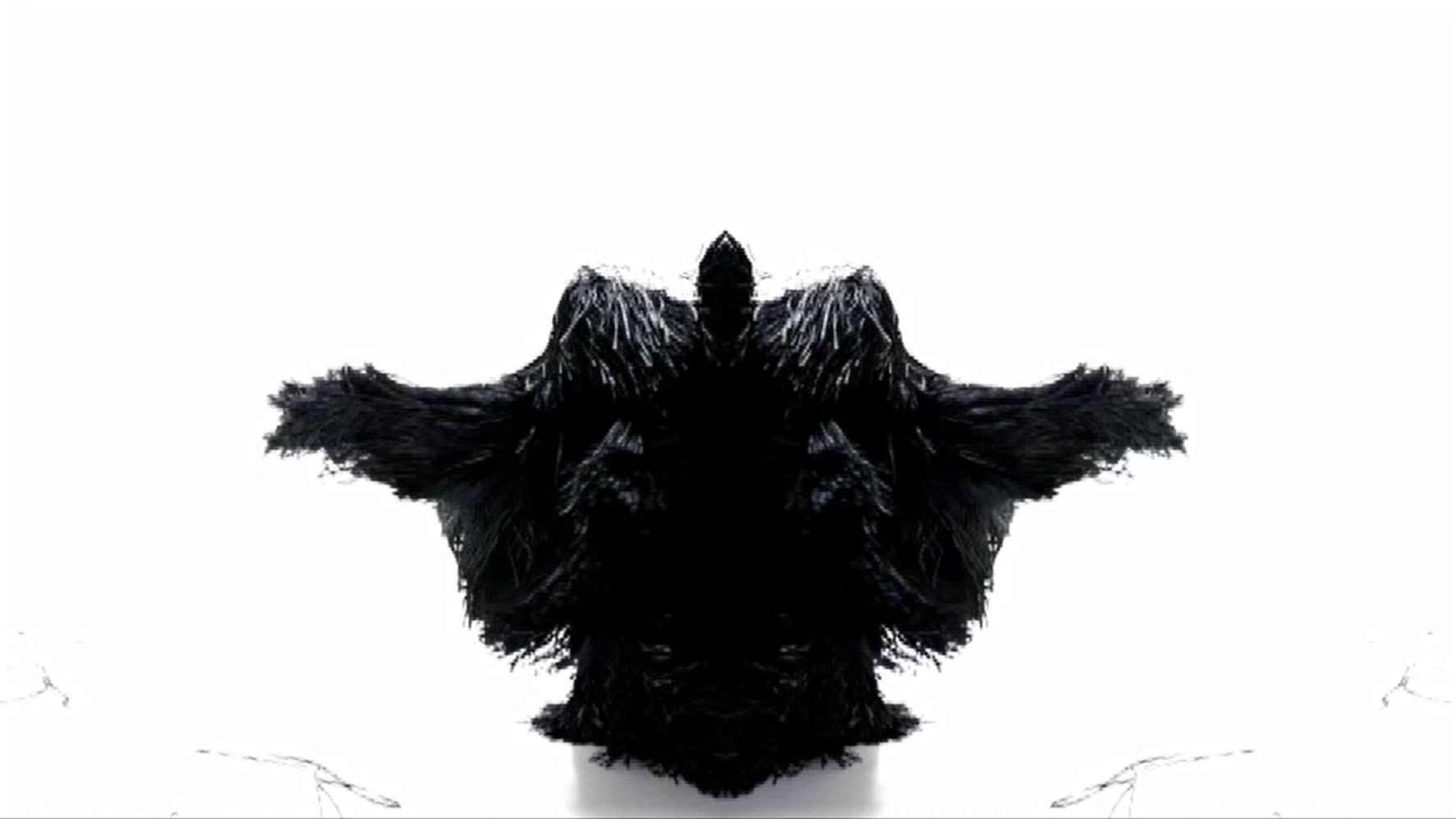 Nick Cave, an artist who for decades has been addressing Black history through costumes that render the body all but invisible, likewise presents a Blackness that cannot be pinned down, that confounds definition or fixed form, while at the same time acknowledging the ways our culture projects its worst fantasies and fears upon it. In Blot (2012), a figure clothed in one of the artist’s signature sound suits composed of layers upon layers of fringed fabric, inspired in part by West African ceremonial costumes, is mirrored around a central axis. The by-turns smooth and sudden movements of the performer transform before our eyes into a succession of Rorschach tests—we might see faces or skulls or birds or African masks over the course of the forty-three-minute video. Even the sound is multivalent: produced only by the fabric of the costume brushing against itself, it is at the same time oceanic, like waves lapping the shore. 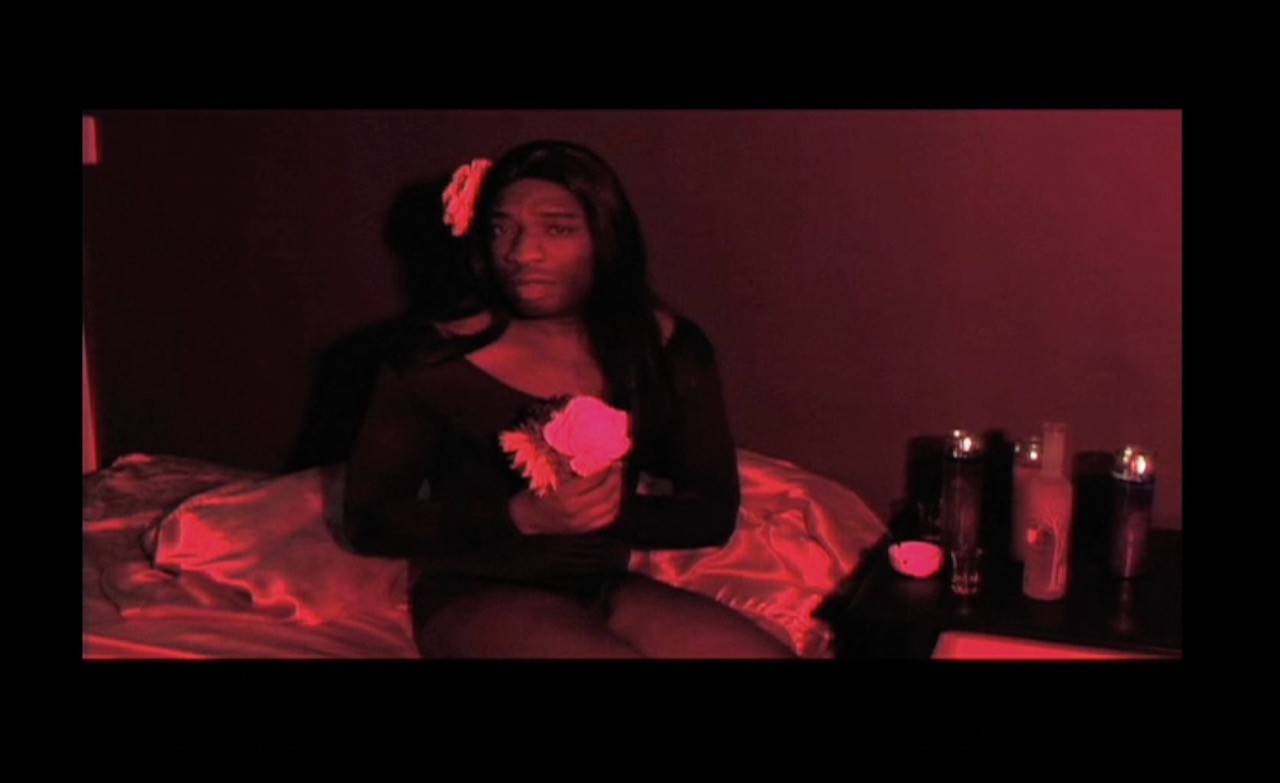 The role that technology plays in the show is varied, evocative, and complex. Some works revel in their scrappy, homemade aesthetics, such as Kalup Linzy’s music video for the song “Hot Mess” from his 2008 album Sweetberry Sonnet, a collection that satirizes the campy melodrama of soap opera, while at the same time evoking the equally urgent sense of sincere longing that marks our most closely held relationships. In contrast, works like Jacolby Satterwhite’s 2019 Moments of Silence use advanced programming and digital applications, in this case to broach the intimacy of family and desire. The two-channel video consists of taped footage and animation depicting the artist dancing and vogueing alongside home movies and his late, schizophrenic mother’s drawings of imagined and imaginary household objects; it deploys virtual space as a kind of neutral ground to come to terms with the past. But no matter the technology, there is a persistent theme of DIY culture that runs through the exhibition—a kind of shared determination to use the instruments available to explore Black subjectivities, imagine alternative worlds, and create provisional spaces of freedom. 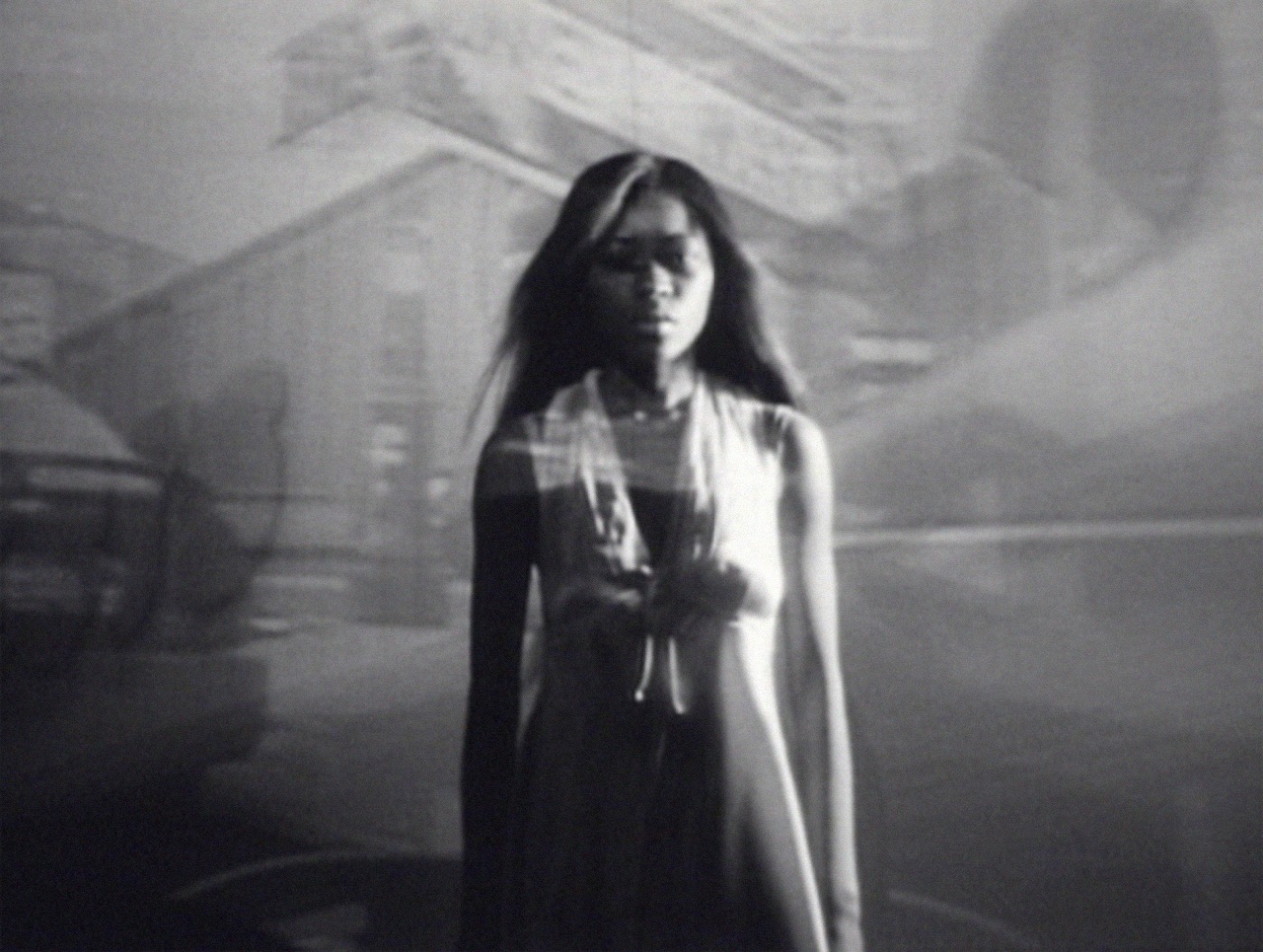 The question of which futures and how to create them is at the heart of the final, deeply affecting work on view: Christie Neptune’s Two Miles Deep in La La Land (2007–12), shot in black and white on 16mm film and then transferred to video. We see a young woman, coyly aware of the camera, applying her makeup at an outdoor café, intercut with images of her now enacting a very different persona—serious, meditative—moving deliberately in front of a projection of a city street; various dates stretching back to the late nineteenth century alluding to the female members in Neptune’s family tree appear on the screen, though they go unexplained. While watching these images of Black femininity, we hear Alice Walker’s voice, reading over and over a passage from her 2012 poem “Democratic Womanism.” Skipped and doubled, Walker’s intonation transforms the passage into a prayer, or perhaps a manifesto:

I want something else;
a different system
entirely.
One not seen
on this earth
for thousands of years. If ever.