A collection of essays by the eclectic filmmaker and musician. 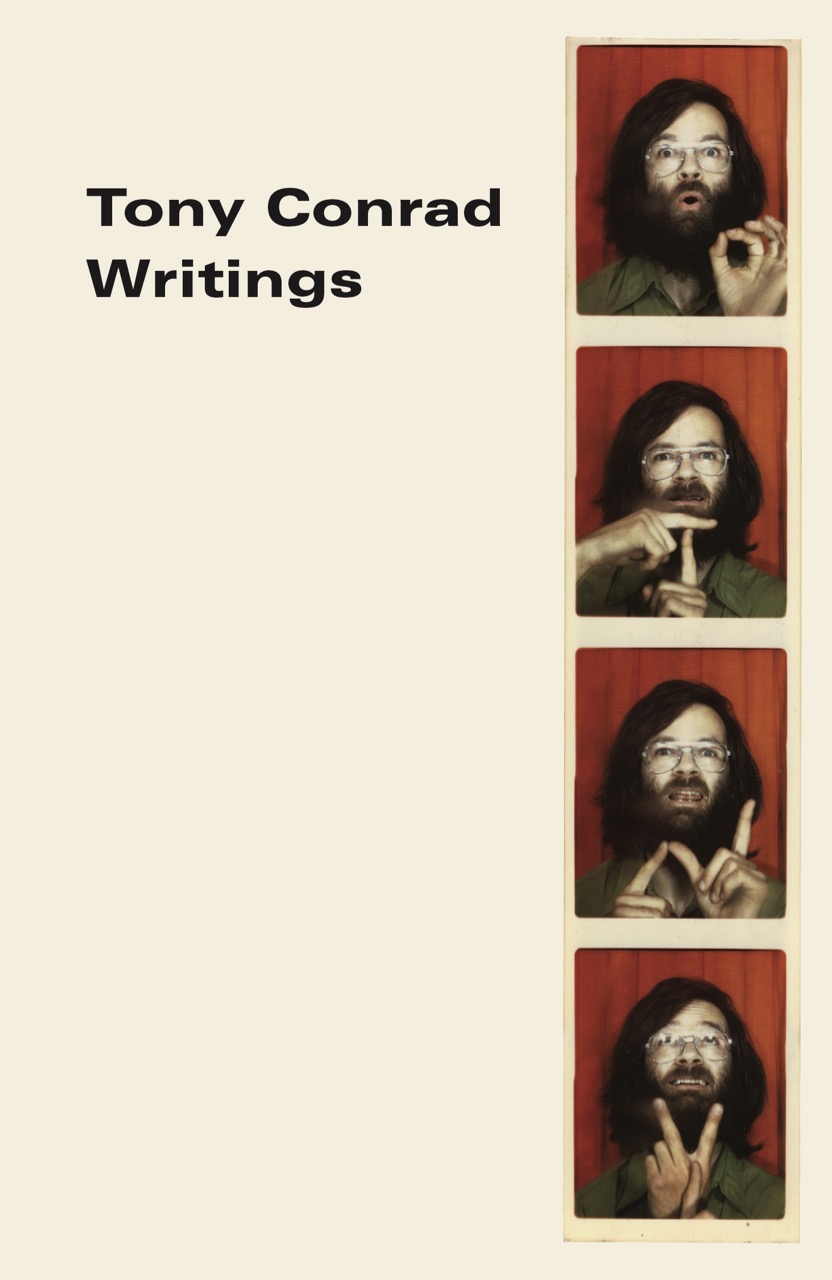 When the towering artist, filmmaker, and composer Tony Conrad died in 2016, he left behind a colossal amount of work, spanning six decades, in his home in Buffalo. There were films, videos, paintings, writings, documentation, drawings, scores, audio recordings, and a pickled Bible on a mantelpiece. Shortly before his death, his friend Andrew Lampert had begun filling hundreds of boxes with Conrad’s work, in the hopes of eventually archiving everything. “He has 16mm, Super 8 films, as well as works in other very fugitive film formats, such as films that he electrocuted, films that he curried, films that he pickled,” Lampert told me when I wrote Conrad’s obituary for frieze in 2016. “He has reams and reams and reams of writing; he has made sculpture, drawings, musical scores, paintings. If there is a mode of artistic expression, he expressed in it. . . . We’re talking about thousands of audio recordings, hundreds of film reels.” One of the many things that Conrad left behind, Lampert said, was a hugely ambitious book in progress called What Music Did.

What Music Did has not yet been published, but a major hidden cache of text has now emerged: Tony Conrad: Writings, nearly six hundred densely packed pages of Conrad’s essays from 1961 to 2012, edited by Lampert and Constance DeJong. It is a heady read—as eccentric, cerebral, quick-witted, and occasionally baffling as its creator. The book encompasses everything from Conrad’s theories on art and music to abstruse mathematical equations, anti-establishment treatises, hilarious asides, and voluminous notes on the development of his own work.

Conrad always seemed ageless, charged with youthful exuberance until his death at seventy-six. The book is suffused with that same spirited energy. In one essay, he writes that he told Film Culture in 1966 that he was thirty seconds old. “That was my best way to describe my internal condition of being, in terms of continuity of perception,” he explains. “I thought that people would read me out from that as a sincere human like themselves who had the integrity to characterize his immediate terms of existence.”

The book offers a tantalizing window into the thinking behind Conrad’s most famous works—including his debut experimental film The Flicker (1966), an intense rush of elegantly arranged stroboscopic pulse patterns, and his radical series of paintings as slow-moving films, Yellow Movies (1972–73). He also recounts the antiauthoritarian sentiment underlining his initial interest in filmmaking. “By the mid-1960s,” he remembers, “I had been drawn to film because of its hopelessly shabby integrity, and also because of its restive and anarchic aspects, which implicitly challenged the progressivism of the art market.” But the world of experimental filmmaking could be constraining, too. On Yellow Movies, he argues: “In seeking to dismantle the authoritarian boundaries of film culture during 1972–74, I turned to extended duration as a conceptual armature.”

Conrad was uncompromising in his beliefs until the end, sticking to his ideals with tenacious fervor. His music—which often involved vast extended drones and noisy explorations of minimalism—defied mainstream popularity. He taunted fellow New York composers who, he felt, had sold out: “[Steve] Reich and [Philip] Glass, far from combating the autocratic tradition of the Western score, carefully inscribed themselves within careerist authorial postures.” He especially didn’t mince words when it came to composer and former Theater of Eternal Music bandmate La Monte Young, and their unending feud regarding the group’s recordings, which Young has not fully released. “By 1991,” he quips, “even Richard Nixon’s secret tapes are out, but La Monte Young is still afraid to let anyone listen to the original Theater of Eternal Music—and who did start the sound?” Conrad didn’t even have time for labels like “free jazz” and “free improvising”—these, he writes, are “frozen clichés
. . . the exhaustion of these terms has gone unnoticed, because they have been shielded by nostalgia for the slack-jawed utopianism of the 1960s, when ‘free speech,’ ‘free love,’ and ‘freedom’ assumed their ‘countercultural’ aura.”

Over the course of several essays and brief vignettes, Conrad traces his artistic development and history, in a way that approaches an autobiography. He talks about his budding interest in contemporary music in college in the late 1950s, and being inspired by a John Cage and David Tudor performance. He discusses classical Indian music (“a vindication of my predilection for drone-like performing”), his own musical experiments, and his first encounters with contemporary art. In all of his writings—from a long rant against the Greek thinker Pythagoras to notes on community organizing—his idiosyncratic personality shows through. In “Slapping Pythagoras,” written to accompany his 1995 album of the same name, he writes:

Pythagoras is too good for ‘common’ music, the tootling and dancing of flute music. Oh no. Pythagoras has to have the ‘Music of the Spheres,’ which only he can hear. The harmony of the planets and the heavens.

What a load of crap! You used the arithmetic of harmony for that? You wasted good arithmetic, sending it off to heaven?

Conrad still seems very much alive as you turn the pages, and in reading the book, I felt a deep connection. Conrad studied math at Harvard and I studied science at MIT; both of us are unlikely fits in the art world. I chuckled as I read his equations, mining my memories of calculus to decode some of his goofball calculations. At one point he surmises that “the cultural work of the critic and the artist might be said to be identical: to ‘change minds’ about things.” As a critic, part of me hopes that this is true. His ideas still have a burning intensity to them—an exhilarating idealism that inspires all of us to forge ahead.