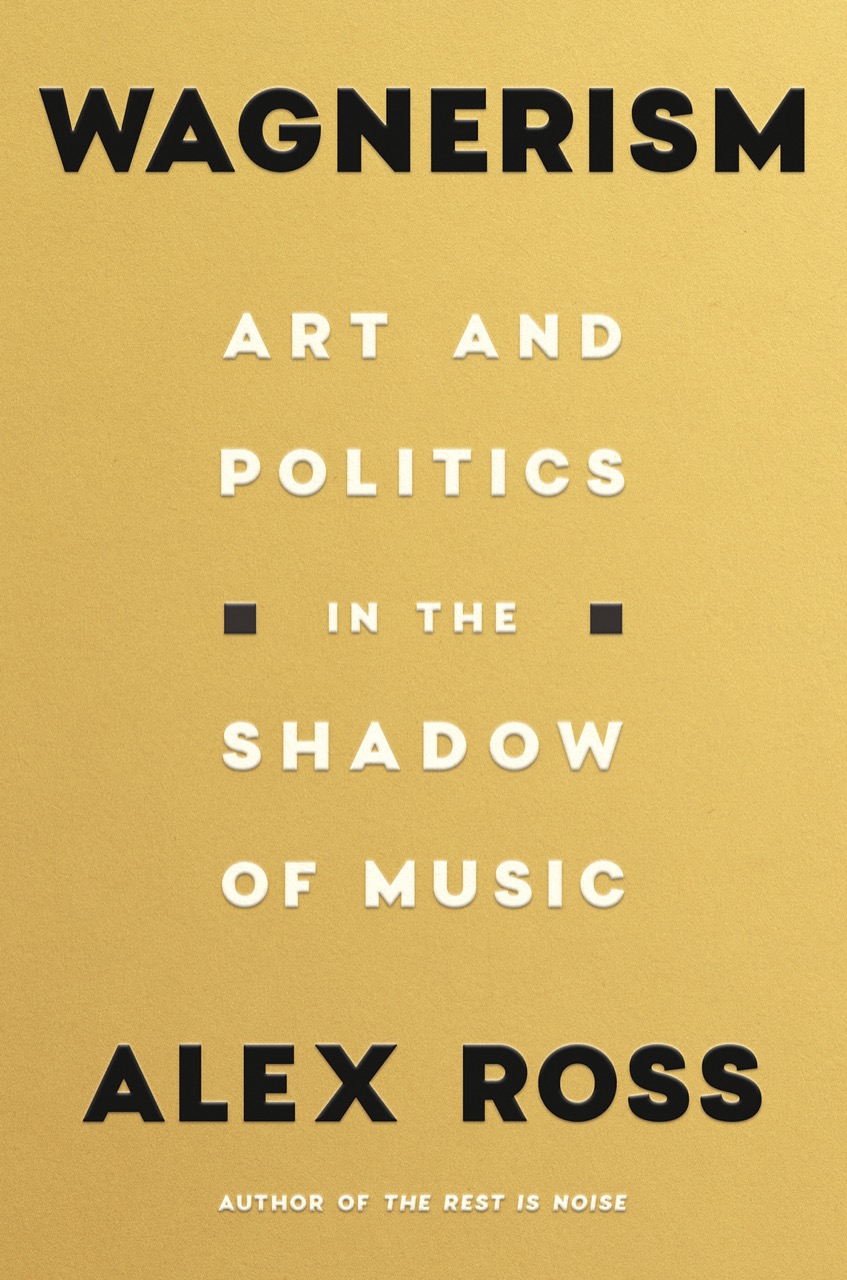 Wagnerism: Art and Politics in the Shadow of Music, by Alex Ross, Farrar, Straus and Giroux, 769 pages, $40

Alex Ross’s Wagnerism: Art and Politics in the Shadow of Music begins with the composer Richard Wagner’s death, in Venice, in 1883. Wagner was lodged with his family in an extravagant palazzo on the Grand Canal. His health was failing. His opulent living quarters, which were draped in splashy layers of satin and lace, set the stage for an exit that could only be described as theatrical. The composer, wearing a pink dressing gown, clutched his chest and cried out his last words, which were, apparently, “My watch!” News of his death spread quickly across the world. “Five thousand telegrams were reportedly dispatched from Venice in a twenty-four-hour period,” writes Ross. Wagner’s body was transported to his German home of Bayreuth for a grand funeral, and legions of fans paid homage globally.

Wagner was celebrated widely during his lifetime, but the scope of his legacy expanded after his death. In Ross’s sizable new tome, he examines the phenomenon of “Wagnerism”—the web of Wagnerian inspiration that extended far beyond music. Wagnerism, Ross writes, “traversed the entire sphere of the arts—poetry, the novel, painting, theater, dance, architecture, film. It also breached the realm of politics: both the Bolsheviks in Russia and the Nazis in Germany used Wagner’s music as a soundtrack for their attempted reengineerings of humanity. The composer came to represent the cultural-political unconscious of modernity. . . . He became the Leviathan of the fin de siècle in large part because he was never merely a composer.”

Wagner’s flair for melody, drama, and elaborate, compelling stage productions helped make him hugely popular, a crossover figure into the broader culture. He was a dramatist, a writer, and an architect of concepts we still use today—most notably the term Gesamtkunstwerk, the total work of art. His operas, like Lohengrin and the epic “Ring” cycle, continue to be performed to huge crowds. His impact is felt in everything from heavy metal to fantasy novels to video games. But Wagner’s legacy is marred, too—his politics were sometimes unsavory, and the infamous co-optation of his music decades later by Hitler, an avowed fan, still casts a long, sinister shadow.

Wagnerism treks through history after Wagner’s death, navigating nearly 150 years at an almost breakneck pace. “This is a book about a musician’s influence on non-musicians—resonances and reverberations of one art form into others,” writes Ross. “Wagner’s effect on music was enormous, but it did not exceed that of Monteverdi, Bach, or Beethoven. His effect on neighboring arts was, however, unprecedented, and it has not been equaled since, even in the popular arena.” In a book that weighs in at nearly 800 pages (660 pages of text, plus another hundred-odd pages of back matter), Ross includes everyone from artists like Wassily Kandinsky and Anselm Kiefer to writers like Willa Cather and Marcel Proust. Architects and city planners, filmmakers, poets, actors, and politicians all figure in. There is a long discussion of World War II and the Nazis, which forms the most gripping, chilling segment. By the end of Wagnerism, one wonders if there was anyone who wasn’t somehow touched by Wagner and his work, for good or for evil.

The book is illuminating and meticulously well researched, and Ross is a tremendous writer—one of the best on music we have. But key to his central thesis is the belief that influence exists, and I am not always convinced that these lines can be drawn. When I was starting out as a critic twenty years ago, one of my mentors, the critic Mark Sinker, a former editor of The Wire in England, argued powerfully against the use of the term influence, and in my own criticism I have often taken pains to avoid it. Part of my problem with influence is that the concept is too univocal; most of us are impacted by many others during our lifetimes, but often in oblique ways. So many of the most interesting bits of cultural transmission happen nonlinearly, via large groups of people, and in zigzag mutations. Assigning influence can also have the unintentional effect of stripping artists of their own originality and vision.

Ross is well aware of the ambiguities and uncertainties that arise with studying influence, and his conclusions are rarely cut-and-dried; they’re more like informed meditations on history through a Wagnerian lens. Some of these meditations are more speculative than others. Kandinsky’s love of Wagner was clearly documented. “Kandinsky named two events in his early life that ‘stamped my whole life and shook me to the depths of my being,’ ” writes Ross. “One was an exhibition of French Impressionists in Moscow; the other was Lohengrin at the Bolshoi Opera. . . . For Lohengrin, he wrote: ‘The violins, the deep tones of the basses, and especially the wind instruments at that time embodied for me all the power of that pre-nocturnal hour. I saw all my colors in my mind; they appeared before my eyes. Wild, almost crazy lines outlined themselves in front of me.’ Kandinsky came away convinced that ‘painting could develop just such powers as music possesses.’ ”

The artist was certainly stirred to his core by Lohengrin. In his writings, though, Kandinsky sets forth emphatically about many other inspirations, too. Ross also makes a connection between Wagner and the Swedish artist Hilma af Klint, which is less clear. On her Parsifal Series, a collection of 144 mystical paintings that may derive its name from the Wagner opera of the same name, Ross writes: “The series suggests a journey of initiation, like Parsifal’s long, fitful progress toward the Grail. It could be the ‘invisible theater’ of which Wagner dreamed.” Perhaps, but af Klint was also immersed in spirituality and belief systems that were separate from Wagner, and establishing a link from him to the painter can dispossess her of some of her own unique meaning and agency.

Wagnerism is an important book—one that undoubtedly took many years to write. But it is also many books in one. It has a central thesis, but not a narrative arc that binds it together with character development, a plot, or a conventional storyline. Ross can sometimes get consumed with exploring a line of influence between Wagner and a particular individual. These long passages can add heaviness, but Ross’s fluid, accessible style and his attention to vivid detail save it from the dryness of an academic text. Wagner made serious music, and has a troubled and fascinating legacy, but he could also be campy and a bit of a ham. At times when reading this book, one wishes for some more Wagnerian drama, some pomp and entertainment, and maybe a fog machine or two.