The photographer adjusts herself to fit at the Museum of Modern Art. 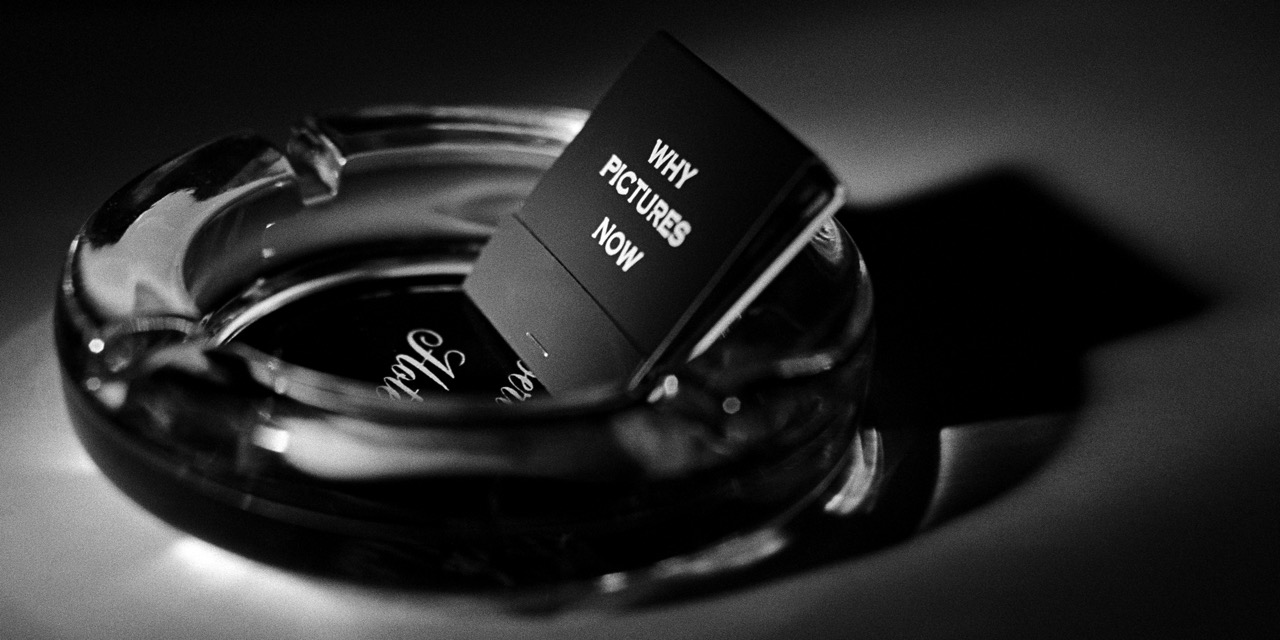 My first encounter with Louise Lawler occurred over thirty years ago at her debut with Metro Pictures gallery (1982). She challenged the lazy assumptions about art that I’d learned and more or less clung to since childhood. For instance, seeing that exhibition contradicted the understanding that solo shows are, well, solo; that they feature works by a single, and singularly gifted artist—possibly a genius. Her exhibit dispatched that assumption in part by dedicating much of its space to arrangements of works by other artists on walls painted colors other than white-cube white. Lawler’s first and long overdue New York museum survey, now at the Museum of Modern Art, similarly includes pieces by contemporaries whose work she admires: Allan McCollum, Felix Gonzalez-Torres, and Cameron Rowland, among them.

During press-preview remarks the exhibition’s curator, Roxana Marcoci, was careful to characterize this as a “survey,” not a “retrospective.” My thoughts drifted to Ed Ruscha’s well-known drawing I Don’t Want No Retro Spective (1979). Lawler is arguably more reluctant to be suspended in a retrospective’s curatorial aspic than Ruscha. He merely borrowed the phrase from actor Bud Cort. Lawler collaborated closely with Marcoci on a show that omits virtually all biographical information, and with few exceptions avoids chronological sequencing, instead recombining art from across the spectrum of a four-decade career. Rather than an exhaustive run-through, it offers a judicious slice across her practice strategically situating recent innovations (the “now” in WHY PICTURES NOW) in relation to Lawler’s best-known work: photographs that show art in decidedly non-idealizing ways.

The photograph Monogram (1984) finds Jasper Johns’s canonical encaustic, White Flag (1955), hanging over color-coordinated monogrammed bedding. Other pictures reveal how art moves through space, and whose hands move it (White Gloves [2002/2004]). Still others discern the potential pathos of art at auction. Bulbs (2005/2006) depicts impressive lengths of light strings by Felix Gonzalez-Torres, lying, abjectly unlit, awaiting their sales-room fate. Many of Lawler’s photographs foreground such functional and/or promotional accessories as wall labels, handouts, stationery, and matchbooks that, together with writing like this, “frame” art. Lawler’s emphasis on such “frames”—be they discursive, political, economic, or spatial—has prompted some of her keenest observers to identify her work with “institutional critique.” 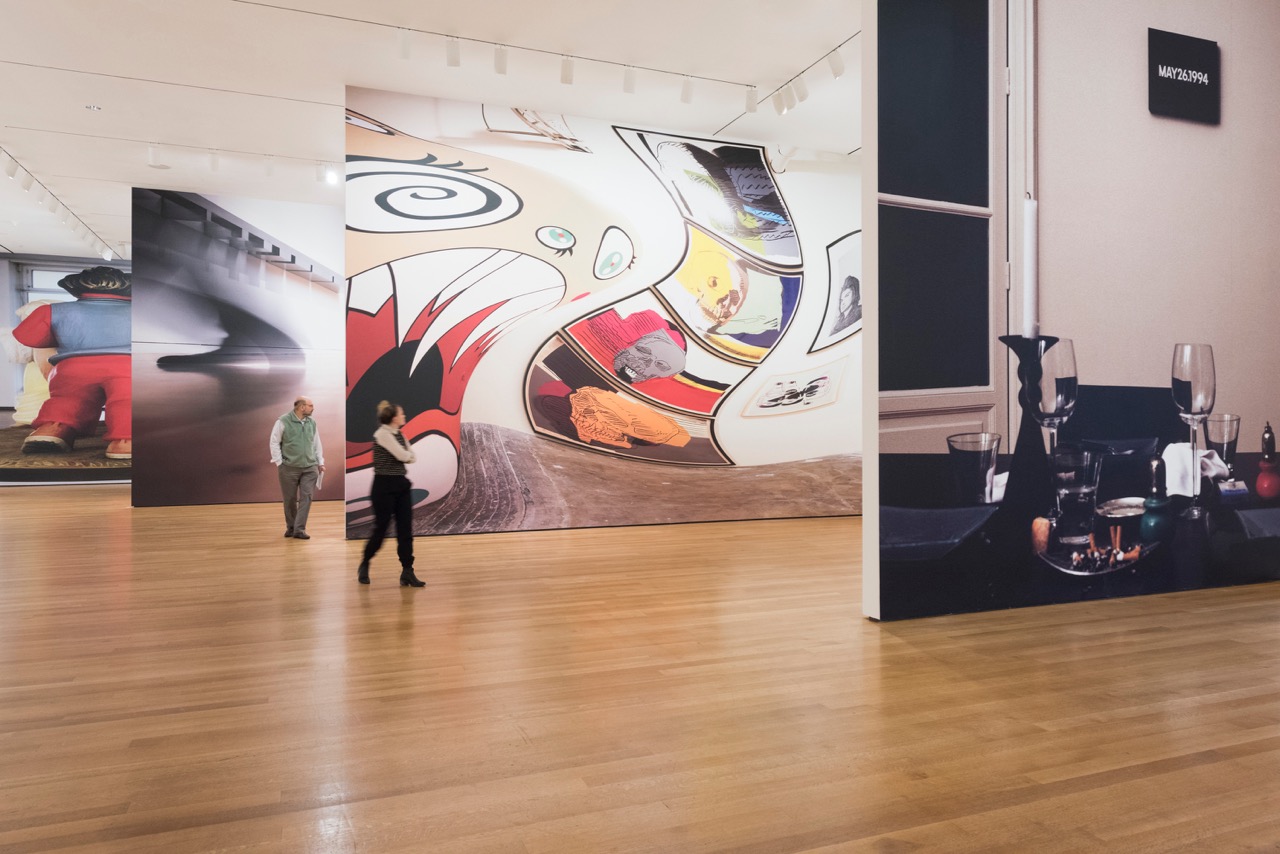 In 2016, Lawler introduced “adjusted to fit,” printing her images on vinyl at the same scale and aspect ratio as the wall onto which they get mounted, full bleed as photomurals. At MoMA, this development is put to architectural use, and yields critical and at times woozily expressive effects. In the show’s first gallery, Lawler’s “classic” photographs are presented with a sequence of walls entirely covered by “adjusted to fits.” To the limited extent that it is the wall—not the artist—determining the picture’s appearance, this innovation adds another aspect to Lawler’s contestation of mythic, godlike creative autonomy. But perhaps not always. 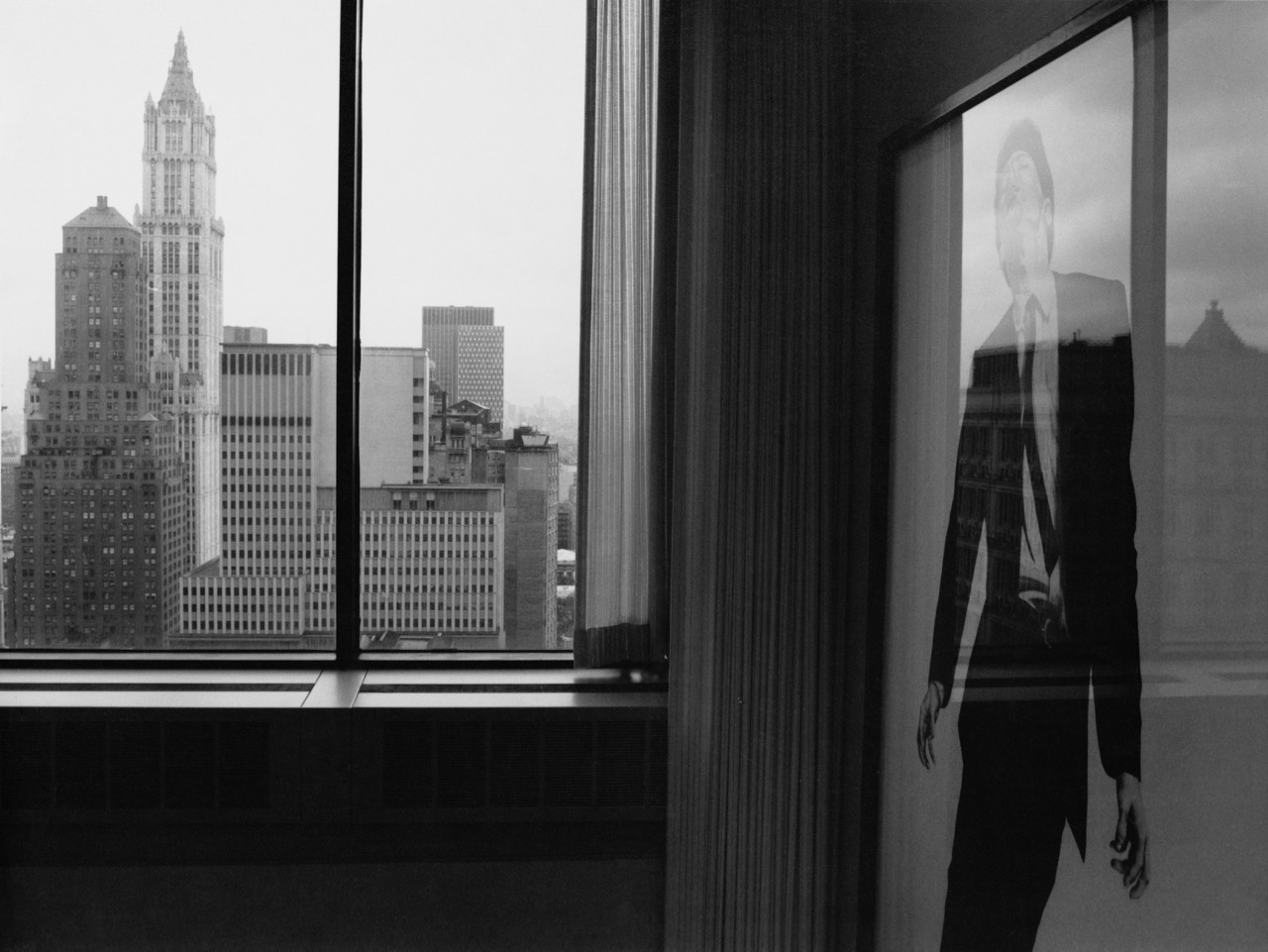 Stepping off the escalator onto MoMA’s sixth-floor landing, visitors confront Arranged by Donald Marron, Susan Brundage, Cheryl Bishop at Paine Webber, Inc., NYC (adjusted to fit) (1982/2016), an enormous modification of her earlier (1982) black-and-white photograph showing a corporate interior in which one of Robert Longo’s Men in the Cities drawings hangs to the right of a window looking onto office towers in lower Manhattan. Adjusted to fit, this frequently reproduced image now delivers a breathtaking visual punch, suggesting formal, evocative, not arbitrary, reasons for selecting this Lawler photo for that museum wall. Here the dimensions of Cass Gilbert’s Woolworth Building stretch beyond its already intense, Gothic-revival verticality to even more neck-craning proportions. 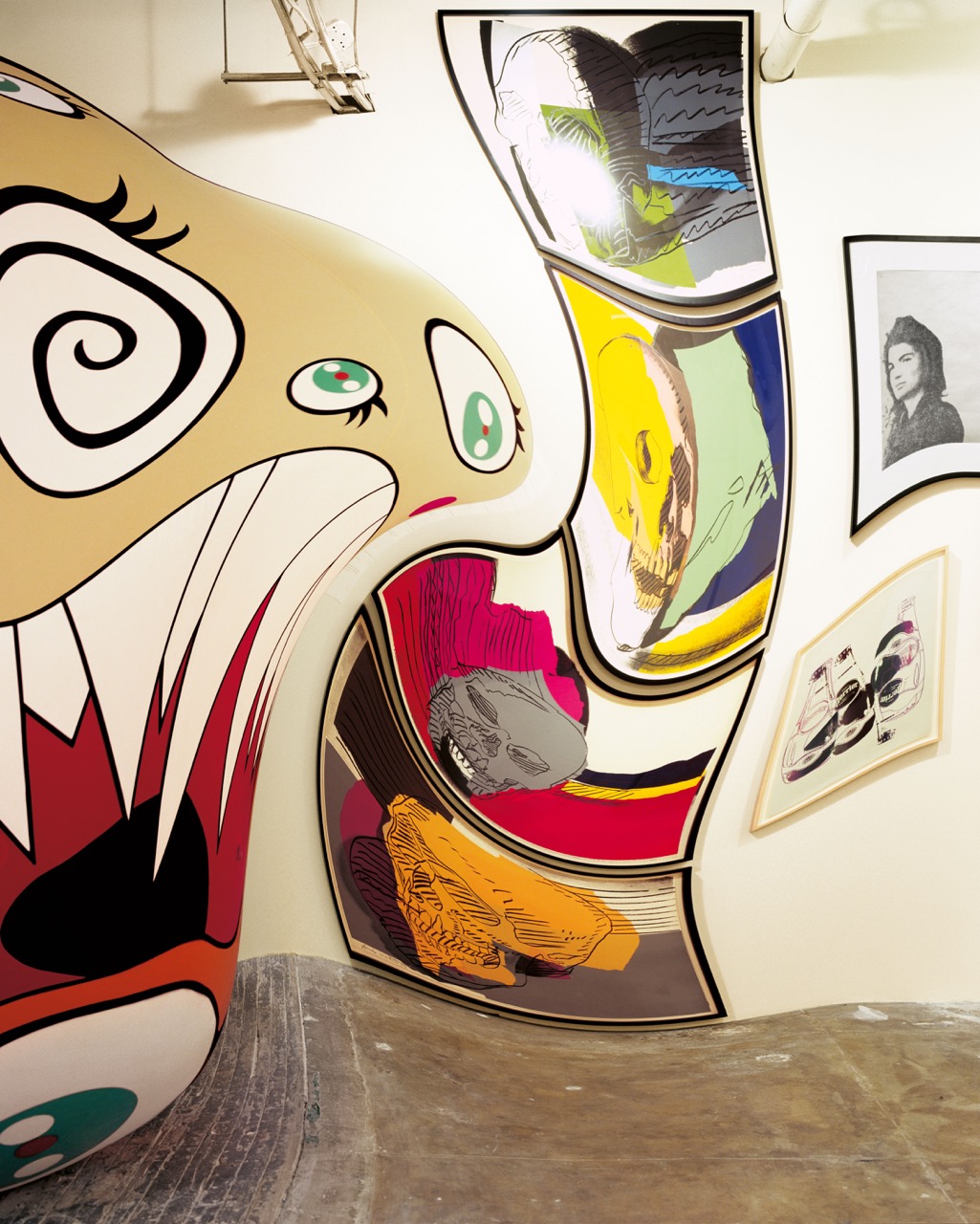 Pollyanna (adjusted to fit), distorted for the times (2007/2008/2012/2017) introduces another, still more recent development, as Lawler adds fun-house distortion to this wall-size photograph. Like the picture it modifies, this greatly enlarged variant zeroes in on a comic-scary, razor-toothed Murakami head in the company of no fewer than six mostly grim Warhols, including the entire Skull Portfolio (1976) hanging as a vertical stack, and one partially cropped Jackie. “Adjusted to fit” and “distorted for the times,” this now doubly twisted image alarms—as an anti-expressionist visual scream, perhaps in response to the Trump-induced assault on truth; or perhaps to such warehoused concentrations of the anything-but-Pollyanna-ish art it depicts. 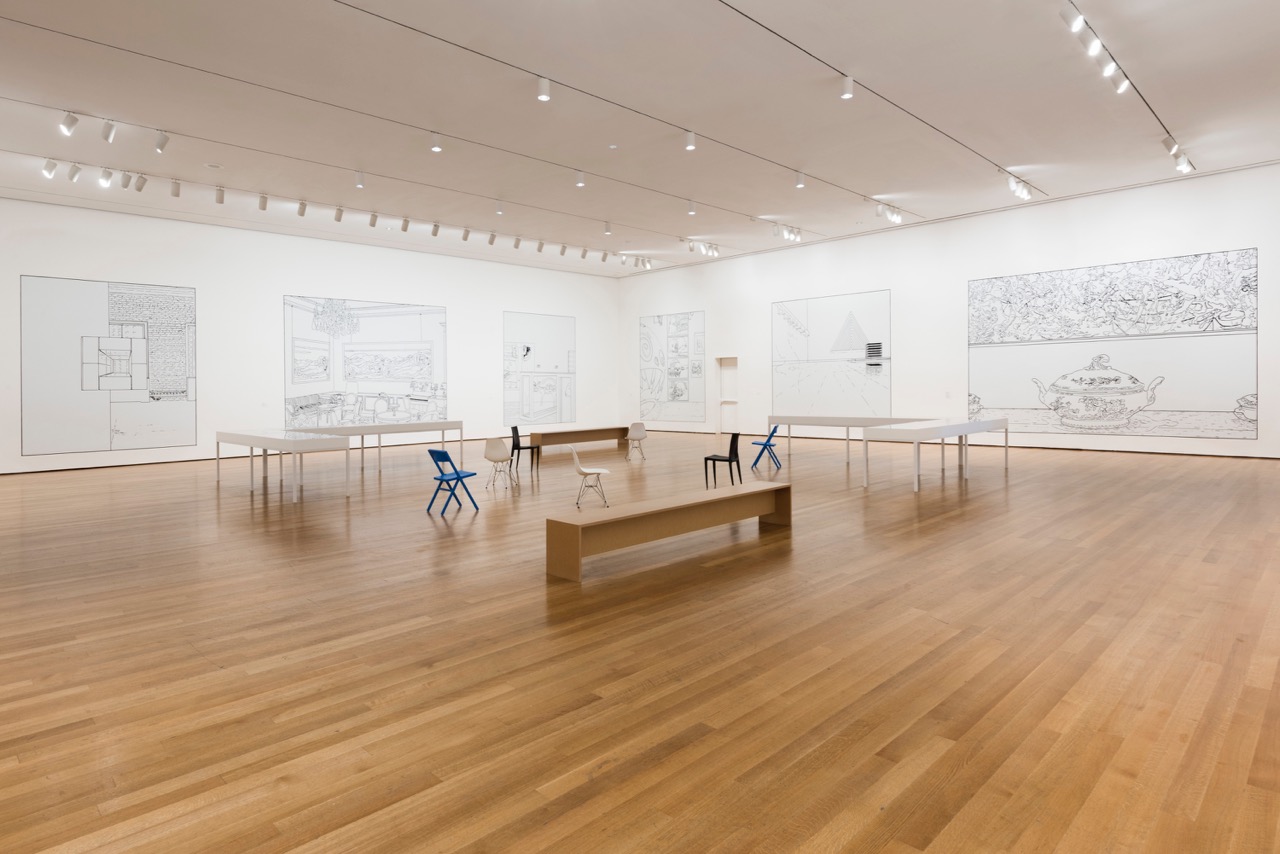 In another, relatively recent collaborative innovation, Lawler hired illustrator-artist Jon Buller to execute “tracings” from her photographs, which, scanned, greatly enlarged, and printed in black on white vinyl, adhere directly to the wall. Eight such monumental “tracings” preside over the show’s largest gallery, otherwise noteworthy for comfortable seating and, especially, a pair of L-shaped vitrines that mirror each other from across the expanse. The vitrines display a career-spanning wealth of the artist’s often witty, not infrequently tendentious ephemera. Surprises await the attentive viewer: a single gray card is imprinted in black sans serif with the title of psychoanalyst D.W. Winnicott’s 1958 text, “THE CAPACITY TO BE ALONE,” which assays the challenges and benefits of solitude. Though lacking the plastic, wall-mountable dispenser that, together with such cards, constitutes an editioned work (1990), its inclusion implies that even this most socially committed artist recognizes the need for solitude, study, reflection.

Assiduously avoiding the self-centered self-importance implicit in the conventional view of artists as uniquely gifted individuals, Lawler has systematically turned down requests for interviews from art writers trained to look to the biographical details of artists’ lives to understand their work. Asked for a headshot to adorn the cover of the May 1990 issue of Artscribe, Lawler supplied one instead of Meryl Streep; the glamour shot appears under Lawler’s own subversively cunning copy: “RECOGNITION MAYBE, MAY NOT BE USEFUL/Louise Lawler.” 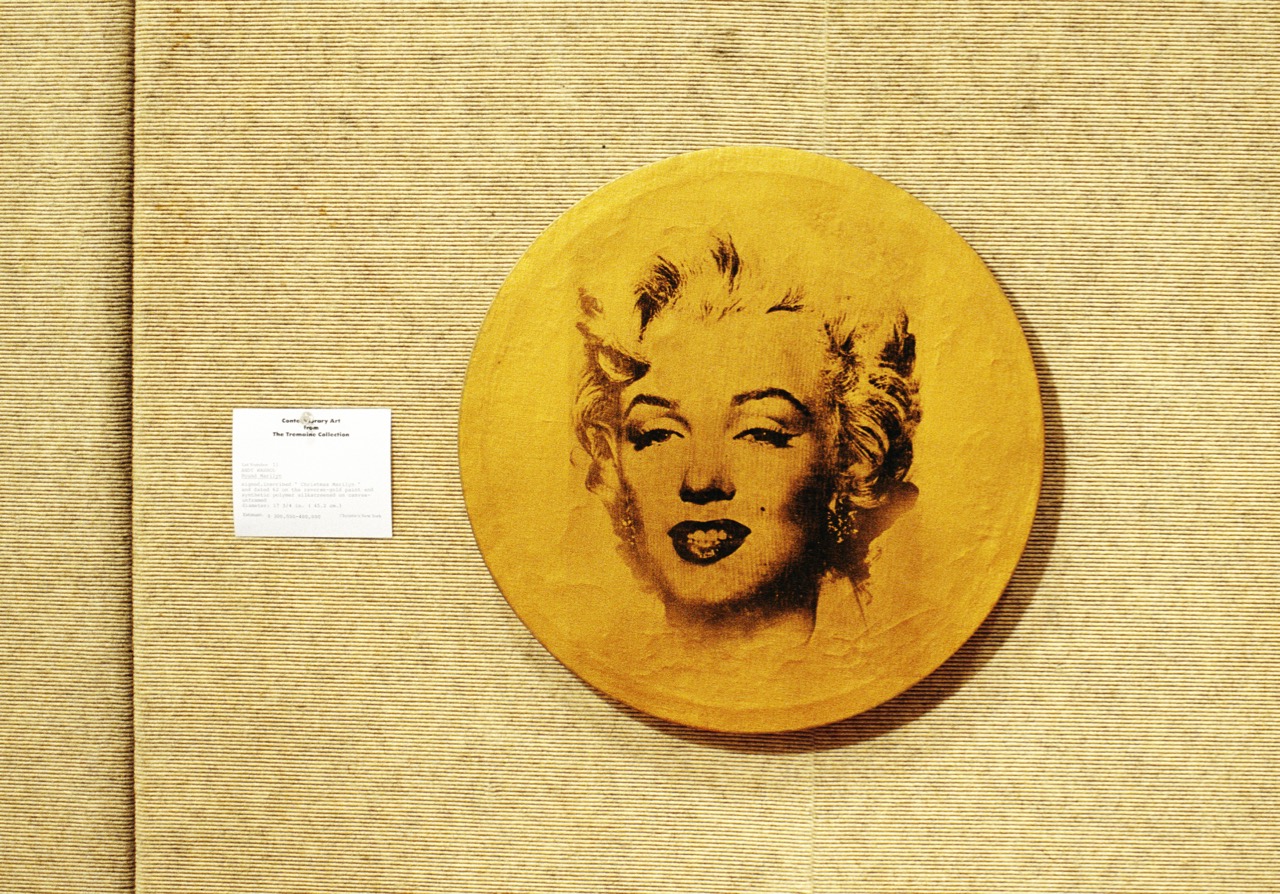 Lawler has only participated in three published interviews, one being a dialogue with her longtime friend, critic Douglas Crimp. In it, Crimp notes the difficulty of pinning down the emotional effects of Lawler’s art, but then mentions her inclination to describe certain things as “poignant.” Defining the latter as “pointed,” “sharp,” “focused,” and “moving,” Crimp then identifies those qualities with two identical, but differently titled, Lawler photographs of a small, round, gold Warhol Marilyn painting hanging on a carpeted wall beside a Christie’s label that identifies it and estimates its value. The placement of the two Marilyn pictures provides what I consider the most affecting curatorial decision at MoMA. One first encounters Marilyn, painted by Warhol shortly after the actress’s death in 1962, accompanied by an emotionally provocative wall label, inscribed in gold letters on transparent Plexiglas: Does Marilyn Monroe Make You Cry? Picture and label together elicit sadness, though perhaps not tears in the susceptible viewer. Coming upon the second Marilyn, one quickly realizes that it hangs directly opposite the first, aligned at the polar end of the invisible axis that connects the two works—the pictures are identical, yet physically distant. One then reads the second picture’s label: Does Andy Warhol Make You Cry? The second title, more playful, possibly sarcastic, gently mocks the sentimentality of the first, as the play of tension between them—between poignancy and irony—teases the viewer delightfully, as does so much else in this demanding, rewarding exhibition.