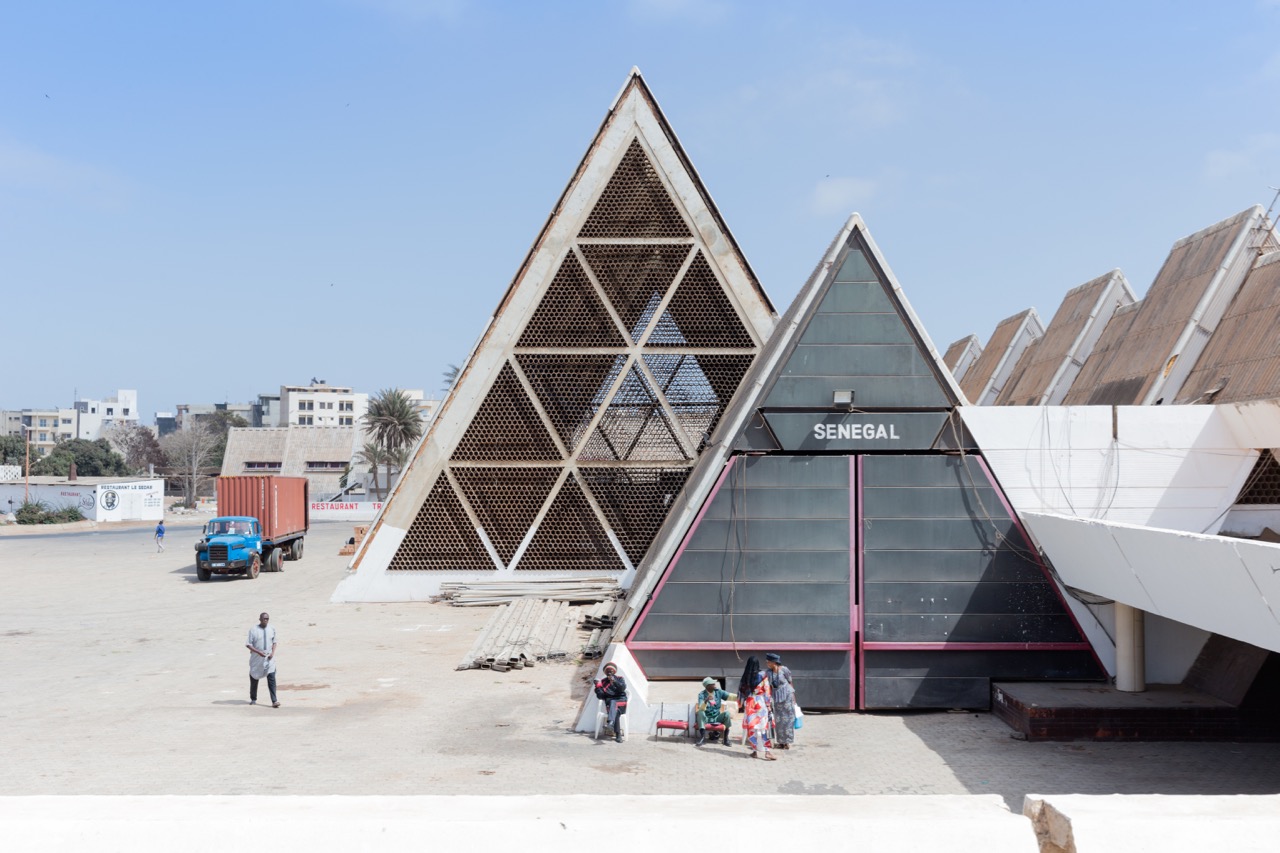 When African nations began to obtain their independence in the 1960s, sui generis architectural projects were rapidly undertaken, in part to distinguish the new nations from their colonial predecessors. As revealed in Architecture of Independence—African Modernism—an excellent, if overstuffed exhibition based on a book of a similar title—the structures that resulted from this building boom were often visually distinctive to the point of eccentricity.

This is particularly true of the five countries featured here—Kenya, Côte d’Ivoire, Ghana, Senegal, and Zambia—each of which is represented by a dozen or so projects. The projects, in turn, are each encapsulated in a half-dozen snapshot-sized color photographs, accompanied by short texts drawn from the book. Through the dense thicket of material, one gleans that some of the most intriguing works on view are emphatically sculptural or symbolic in their refusal to cater to the utilitarian demands of architecture, and therefore strive toward alternative Modernist futures as opposed to becoming demonstrations of design functionality. Alas, as intimated in both exhibition and book, futuristic architecture alone does not a better society make. 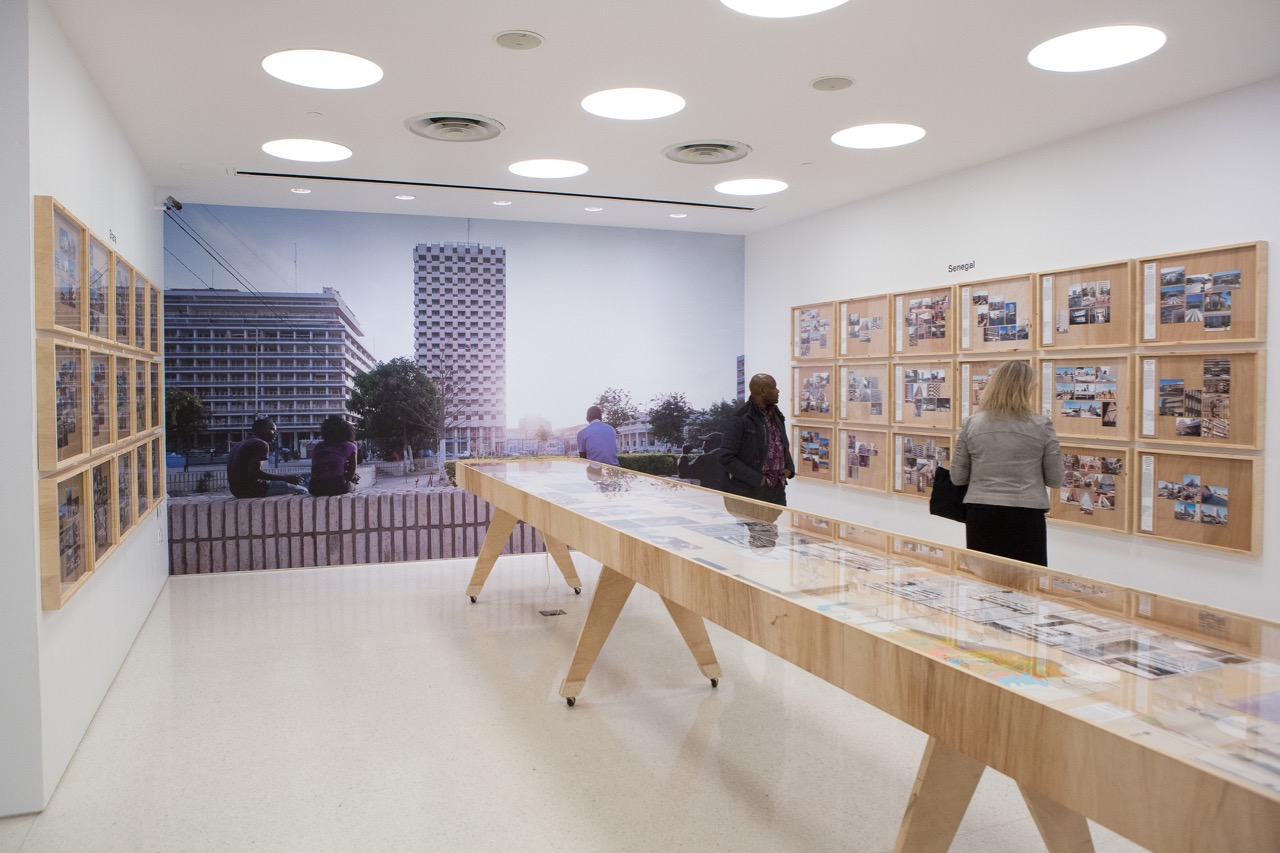 Take for instance the mid-1960s Chai House in Nairobi, Kenya, one of eighty projects featured in the show. In the modestly scaled complex of the Chai House, designed by Hughes & Polkinghorne Architects, one finds an awkward cluster of industrial, transportation, and entertainment functions cheek by jowl. This in a red UFO-like disk suspended on a slender mast (housing a disco) and an adjacent tower block headquartering the Kenya Tea Development Agency, whose lower level shelters a gas station. The Chai House was torn down in 2014, perhaps because this sort of architectural eclecticism, though fascinating in its visual and operational oddity, is in effect a kind of space-age prolepsis, predicting a look of tomorrow that in actuality dates quite quickly. Here, trendy design may result in part from market-driven capitalism’s emphasis on short-term growth and ad hoc development, versus holistic city planning. Yet a concern the show considers again and again is how capitalism was in fact only one of several potential futures at the time, vying with other possibilities such as socialism or totalitarianism. 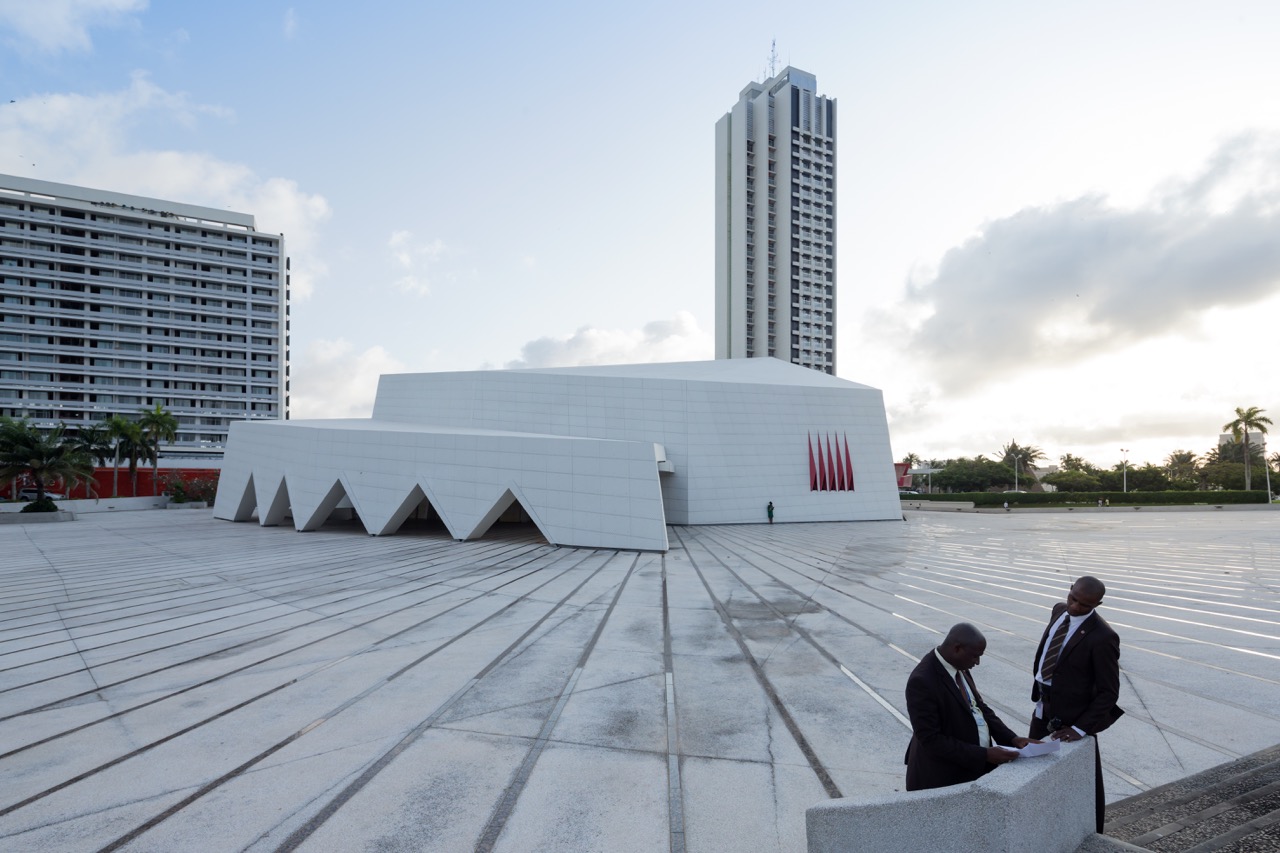 If such hallmarks of Modernism as internally consistent silhouettes, rational floor plans, or cohesive use programs are missing in Chai House, maybe what we’re witnessing isn’t Modernism at all, but a kind of postmodernist pastiche avant la lettre. In some cases, the impetus behind visual hybridity is rather a symptom of clashing cultures and possibly incompatible definitions of the modern nation. The Hotel Ivoire Abidjan in Côte d’Ivoire (1962–70, designed by Heinz Fenchel, Thomas Leitersdorf, and William Pereira) is a case in point. Commissioned by Félix Houphouët-Boigny—Côte d’Ivoire’s first president in an authoritarian one-party state after the French withdrew from the nation in 1960—the massive hotel was intended to be the most opulent in sub-Saharan Africa. A colossal wooden totem pole replete with dozens of carved masks is plopped in a plaza adjacent to a gridded white pavilion-cum-bunker composed of colonnaded, stylized triangular concrete arches. In this white plaza, the pole is flanked by a minimalist sculpture of a polyhedron balanced on a point and a Jean Arp-like biomorph in red, white, and black, while a slender brutalist high rise housing the hotel rooms towers above. The project includes a 250-meter pool (five times the length of an Olympic pool) and a currently defunct ice-skating rink.

In locations such as Côte d’Ivoire and Zambia, ruled by dictatorial leaders and lacking progressive or enduring democratic states, the socio-political redistributive thrust of Modernism became an empty gesture. The aesthetic tics of brutalist architecture (lots of cast concrete or simple brick, an emphasis on simple geometries and modular units, exposure of the building’s functions) came to stand in for the egalitarian aspiration of visual “honesty” in construction. The whimsies of the patron (big pool, ice skating rink, etc.) then quickly took over. 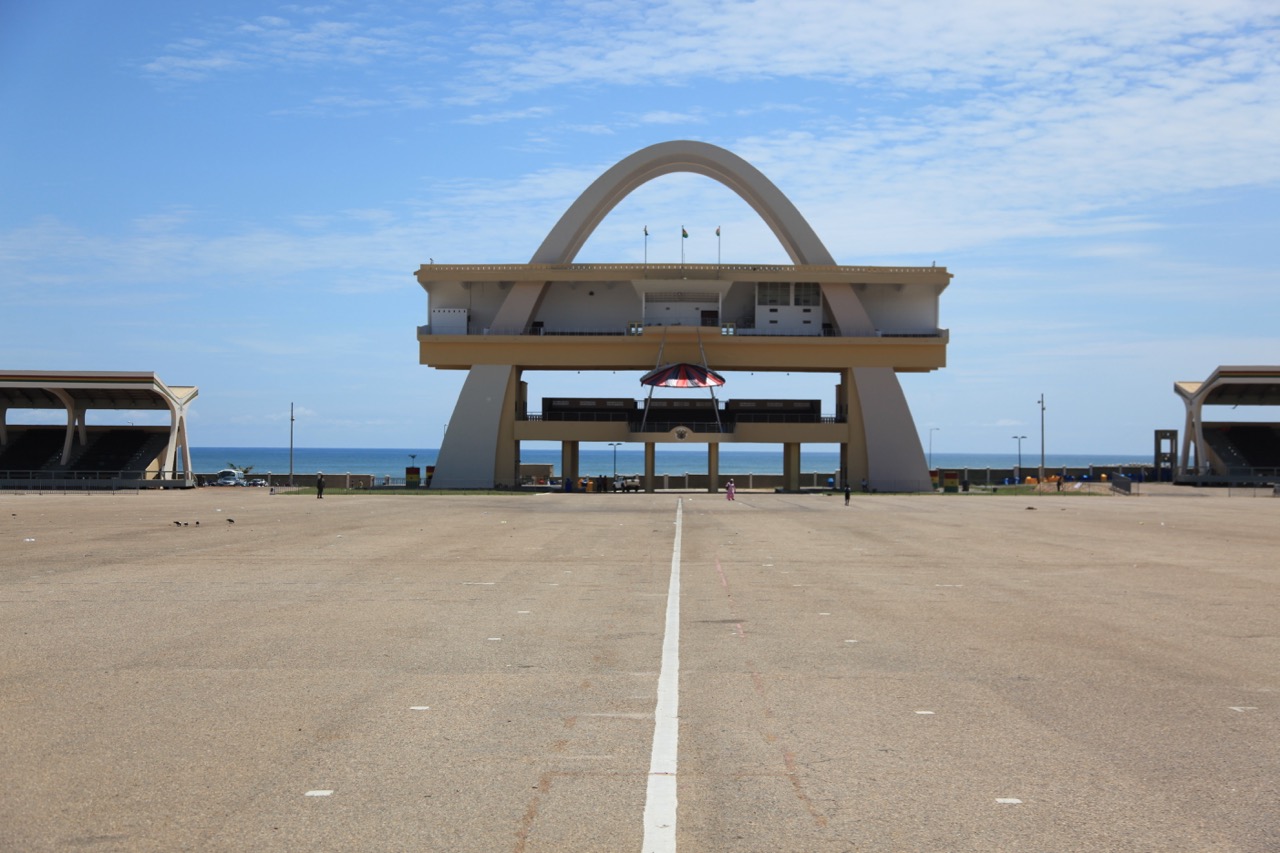 The projects of the period that work most successfully bridge radical formal experimentation and aspirations toward revolutionary new social, political, and economic systems, which after all could be said to be the defining project of capital “M” Modernism. The innovative silhouettes of other projects undertaken in nations like Senegal and Ghana with strong socialist utopian ideologies are striking, when weighed against strongman-driven vanity projects or foreign-financed hotels and shopping complexes. Emblematic of the struggle for architecture to guide a new collectively shared vision of modernity is the design of Independence Square Accra in Ghana, completed in 1961. The second largest public square in the world (after Tiananmen Square in Beijing), the site is anchored by the monumental Independence Arch, composed of three slender arches bisected by a horizontal platform. Behind this structure is the Gulf of Guinea; with the vast plaza before it and the open ocean at its back, the arch is placed to maximize the drama of its iconic silhouette.

The fact that this complex was undertaken by the young nation’s Public Works Department, and not by a European architectural firm or private developers, attests to its civic purpose. The commemorative nature of the site, celebrating the birth of Ghana’s democracy in 1960—it was the first nation in sub-Saharan Africa to achieve colonial independence, in 1957—is emphasized by the giant Black Star Monument facing the arch across the square, which symbolizes the black independence struggle. The half-million-person capacity of the square may be linked to the ideology of inclusive, non-tribalist Pan-Africanism advocated by Ghana’s first president, Kwame Nkrumah, who commissioned the project, with the gate understood as a welcome to other states. (Nkrumah cofounded the Non-Aligned Movement in 1961.)

Nkrumah’s suspicions about the malignant effects of capitalism and Western development as a form of foreign dependency led to a frenzy of spending on industrializing the nation, and on municipal projects like Independence Square. The expense of these projects, along with his left ideology, contributed to what many suspect was a CIA-led military coup deposing Nkrumah in 1966. Multinational corporations and foreign conglomerates, held by Nkrumah to be instruments of neocolonialism, were then invited into the nation.

The context for a large public works project of symbolic national unity such as Independence Square no longer existed. Indeed, an African “architecture of independence” referred to in the exhibition’s title is much rarer than the architecture of stylish, European-financed futuristic design prominent in the show.

Eva Díaz is associate professor in the History of Art and Design Department at Pratt Institute. Her book The Experimenters: Chance and Design at Black Mountain College was released last year by the University of Chicago Press. She is currently at work on a project about R. Buckminster Fuller’s ideas about space exploration, and their legacy in contemporary art, titled “After Spaceship Earth.”