Nonfiction
Nobody’s Looking at You 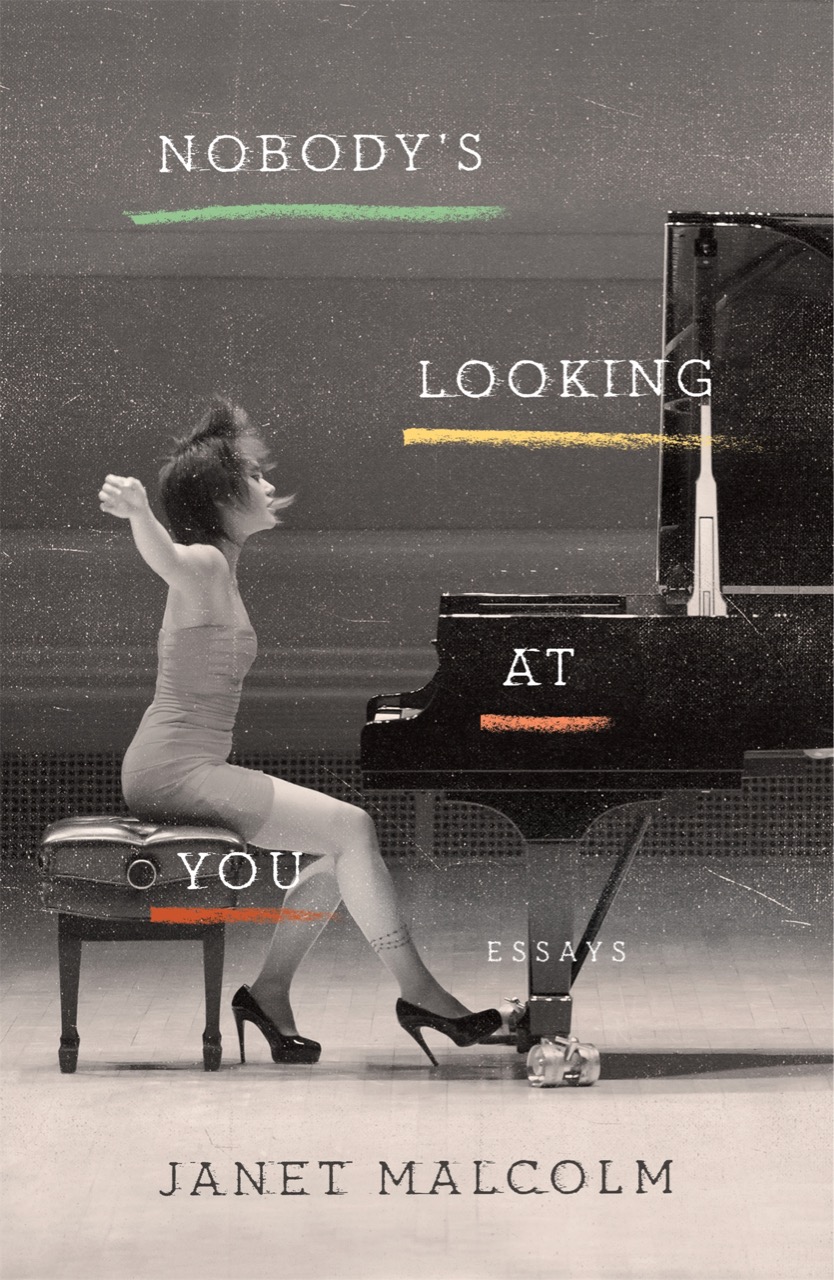 Nobody’s Looking at You: Essays, by Janet Malcolm, Farrar, Straus and Giroux, 289 pages, $27

Janet Malcolm is a writer of uncommon sensitivity. Time and again in her books, essays, and profiles, she will mention a certain air, sense, or atmosphere that has struck her, and perhaps her alone. It happens, for example, in her 1994 piece on the painter David Salle, which is also the title essay of her last collection, Forty-One False Starts (2013). Malcolm has arrived in the artist’s loft: “A slight sense of quotation mark hovers in the air, but it is very slight—it may not even be there.” A slight sense of—this seems casually stated, as if we readers might have felt it too, if only we were are as alert or attuned as Janet Malcolm. The habit is still evident in her new essay collection, Nobody’s Looking at You. The clothes designer Eileen Fisher has “an atmosphere of someone who needs protection.” There are stuffed animals on the bed of pianist Yuja Wang, “or maybe only a sense of them.” But is Malcolm’s discernment still as sharp and fine?

Precision without mercy is what Malcolm is known for. She has been writing for the New Yorker since 1963; her training there took the form of a regular column on interior design, and hardly a mature piece of hers goes by without its telling commentary on her interviewees’ choice of décor. In her books she has written about Sylvia Plath and Ted Hughes, intrigues in the psychoanalytic industry, and the perennial American spectacle of murder and its aftermath. Malcolm’s magazine profiles and reviews—the latter chiefly for the New York Review of Books—are elegant, daring, and sedulously researched. Also, profound. “A Girl of the Zeitgeist,” her 1986 New Yorker study of Ingrid Sischy, who was then editor of Artforum, is like something by one of Malcolm’s beloved nineteenth-century Russian novelists; she can capture a culture in its soft furnishings, or nail a character by describing the way she cuts tomatoes.

Nobody’s Looking at You includes pieces published between 1996 and 2018, with the emphasis on later work. If the book disappoints in places it is perhaps because the subjects of Malcolm’s profiles have grown less colorful in that time; they lack Sischy’s ardent manner, or the anxious self-involvement of Salle. With her skimpy stage attire, Wang presents an enigma: “Looking at her in that remarkable getup was part of the musical experience. But what part?” Malcolm can fathom neither performer nor performance. In a piece about Rachel Maddow called “The Storyteller,” there is some pleasant detailing of the TV host’s broadcast-day writing routine, but when she and Malcolm start to go deeper, into Maddow family history, and the story of a screenwriter relative who was blacklisted, the whole thing trails off. The story “remains incomplete and unsatisfying,” says Malcolm, who can’t make of it the kind of telling anecdote Maddow herself might deploy. The profile of Fisher is the most frustrating in the book; she seems quite as lacking in quirk as her clothes, and Malcolm is reduced to mocking her (actually quite ordinary) management lingo as if it were “peculiar and contorted . . . like a hermetic text by Judith Butler.” Malcolm’s real or affected surprise at such jargon—see also a tin-eared and dated piece about the tonal perils of email—is the more deflating because she has been so often so good at paying attention to the lures and revelations of her subjects’ language.

There remain, however, the considerable pleasures, and the significance, of Malcolm’s own language. “Eileen knows how to wear scarves the way women in Paris know how to wear them and American women almost touchingly don’t.” Almost touchingly. Or this, in “The Art of Testifying,” a 2006 piece about Supreme Court confirmation hearings: “Dianne Feinstein—a thirties-movie character in her own right, with her Mary Astor loveliness, and air of just having arrived with a lot of suitcases.” In the same piece, Jeff Sessions comes to “demonic life,” and Arlen Specter appears “an obscurely sour figure.” Such is Malcolm’s unsparing attention to the grotesquerie of the hearings that you long to know what she would have written, had she chosen to, about Brett Kavanaugh.

“The Art of Testifying” is one of several essays in the collection that seem like they’ve been selected with an eye on the politics of the very recent past. Two of the older pieces in particular feel very #MeToo—or rather, they do and they don’t. In 1997, Malcolm reviewed journalist Helen Garner’s book The First Stone, in which Garner recounted her weirdly over-invested research into a case of campus sexual harassment in Australia. Malcolm is brilliant on Garner’s delirious hostility toward the accusers, but exposes both herself and the era—she’s writing six years after the Clarence Thomas hearings—when she calls sexual harassment “a minor offense with major associations.” A similar historical distance opens up in “It Happened in Milwaukee,” a review essay about Jane Gallop, a literary theorist accused of harassing two female grad students. It’s a fascinating piece, in which you can see both Malcolm and Gallop (via her book Feminist Accused of Sexual Harassment) wrestling with the idea that certain freedoms in academia are not the same as academic freedom, and are about to vanish for good.

One could wish Malcolm had not reviewed Garner and Gallop’s books, but instead hied herself to Melbourne and Milwaukee to send us detailed descriptions of the authors, their airs and atmospheres. She has always been at her best in a room—artist’s studio, courtroom, or analyst’s office—setting out to describe a stranger and his or her motivations. Nobody’s Looking at You contains enough of that version of Malcolm—spending time with the aged owners of the Argosy Bookshop in New York, or attending the last broadcast by radio veteran George Jellinek—to make it a graceful (albeit nostalgic) successor to Forty-One False Starts. The literary form she inherited from New Yorker profile writers like Joseph Mitchell is surprisingly alive and well, and tomorrow’s best essayists and journalists may still aspire to have a slight air of Janet Malcolm about them.

Brian Dillon’s memoir In the Dark Room was recently reissued by Fitzcarraldo Editions. He is working on a book about sentences.