Joan Didion shares her writing process, in two texts from the 1970s. 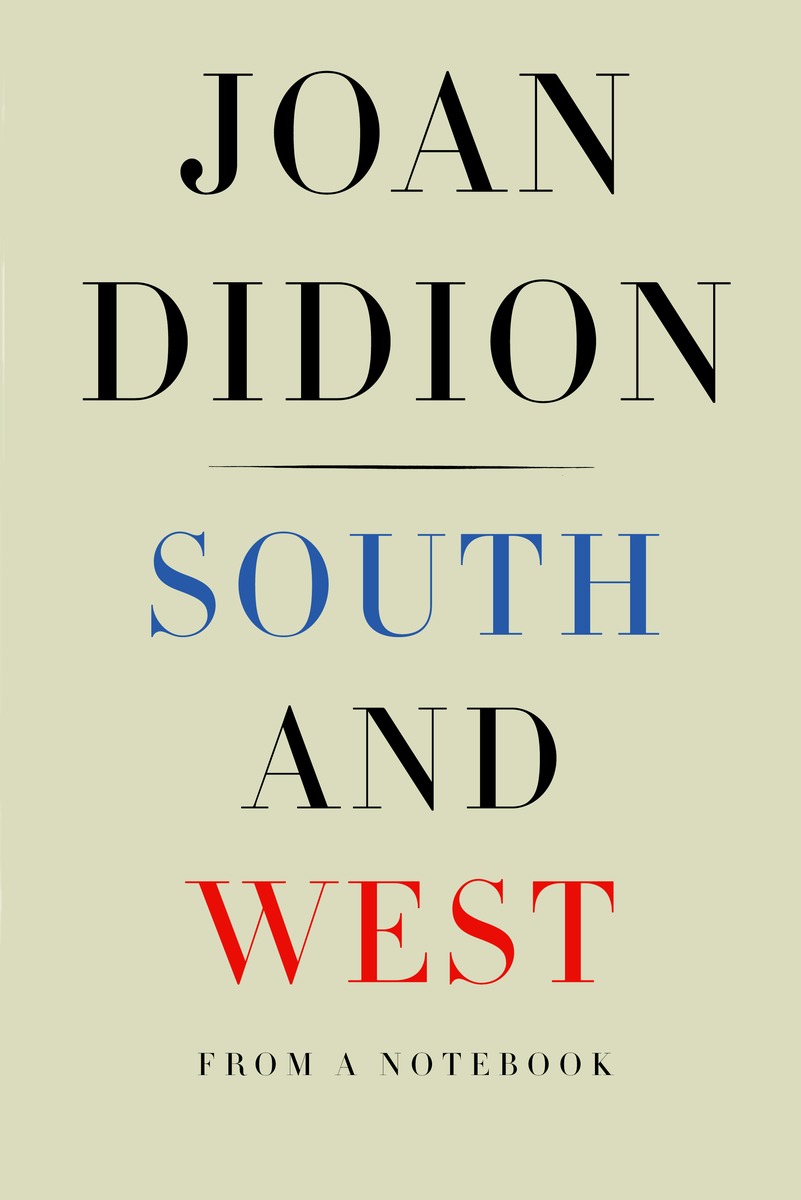 South and West is a late surprise: prime Joan Didion, uncut. Unlike contemporaries in the New Journalism such as Tom Wolfe and Hunter S. Thompson, it was never part of the Didion mode or myth to publish pieces that sounded like, or in fact reproduced, mere preliminary notes. Didion is self-conscious but rarely self-revealing about writing itself, so the essays in which she discloses her process are properly famous. There is a passage in “The White Album” where she lists all the stuff she packs for an assignment, then asks us to notice the portable typewriter on which she types up the day’s notes at the airport on the way home. In “On Keeping a Notebook,” she claims that “the point . . . has never been, nor is it now, to have an accurate factual record of what I have been doing or thinking.” Rather, Didion’s notes register the seismic flickers of identity and mood: “Remember what it was to be me: that is always the point.”

The two pieces that make up South and West are excerpted from her notebooks, and are writing she’s never published before. They bring back to mind and ear a familiar voice, unfamiliarly halting. In the summer of 1970, for reasons that were mysterious to her, she drove around the South with her husband, John Gregory Dunne, but failed to produce the essay she thought was lurking there. In 1976, commissioned by Rolling Stone, she set out to report the Patty Hearst trial in San Francisco—again, nothing. As Didion’s longtime readers may expect, her nothing is really something. “Notes on the South,” the first section, is the humid shadow of a great lost essay, and “California Notes” (which is much shorter) a svelte rehearsal for her 2003 book about her native state, Where I Was From.

Didion claims that “all the reporting tricks I had ever known atrophied in the South”—she neglected to call people she knew, or attend Miss Hospitality contests. As we’ll see, she was hardly disengaged from people during her month in Louisiana, Mississippi, and Alabama. But frequently she halts amid the clichés of writing about the South and suborns them to her own impersonal gothic: “In New Orleans in June the air is heavy with sex and death, not with violent death but death by decay, overripeness, rotting, death by drowning, suffocation, fever of unknown etiology.” A recurring feature of Didion’s writing about place is the sense of sinister formulae working just below the surface: a trope that depends, in fact, on her use of the phrase “the sense of . . .” It’s instructive to see her in these notes—for most writers, they would constitute a late and polished draft—starting to discern the metaphorically potent elements that will govern the finished essay: “the sense of swamp reclaimed to no point.” Her images here are mostly organized around light and air: the dark surface of things that sucks the sunlight into itself, the “dense somnolence” that hangs about the streets of small towns at midday. Neighborhoods threaten to dissolve in such an atmosphere: “Algiers is a doubtful emulsion of white frame bungalows.”

Beneath the taut anxieties of such writing there lie certain predictable forces. There is a deal of talk, among the white Southerners whom Didion meets, about the virtues of industrialization and modernity, but an insistence also on the “grace” and “beauty” of the old ways, leading her to ask, “Is not wanting industry the death wish, or is wanting it?” She hears about a black student at Jackson State University who presented a list of demands at a campus meeting: “everyone explained to me that she did it ‘very courteously.’ ” The white owner of a black radio station assures Didion he will not be having a black preacher over for dinner any time soon. In Biloxi, a woman tells her, “I never been anyplace I wanted to go.” And when Didion goes swimming in the pool at a Birmingham motel, a voice remarks from the bar, “Hey, look, there’s somebody with a bikini on.”

In his foreword to South and West, Nathaniel Rich contends that “Joan Didion went to the South to understand something about California and she ended up understanding something about America.” In the 1960s, California had been an image of the future, filled with dreamers of the golden dream. In 1970, in her essay “On the Morning After the Sixties,” Didion wrote about her disbelief in the capacity of youthful protest to “affect man’s fate in the slightest.” On the evidence of “Notes on the South,” it seemed to her rather that the American future resided of all places in the southern states, where a violent nostalgia conspired with business interests in a welter of “paranoia and febrile conspiracy and baroque manipulation.”

“Notes on the South” could easily have made a book on its own—one hopes there are more such pieces extant, and that Didion will publish them—but “California Notes” is a suitable coda. The Hearst trial is incidental, Didion finding that it hardly touches her at all as a writer or a Californian. Instead, as it had already done in “On the Morning After the Sixties,” her mind returns to the 1950s, and what it was like to be a brittle, intelligent young woman then: “I believed in Dark Cottons. I believed in Small Hats and White Gloves.” The essay lays the ground for her reflections, almost thirty years later, on pioneering California women in Where I Was From. And here and there it is punctuated by opaque, telegraphic sentences that say confounding, possibly hopeful things like “Beautiful Country burn again.”

Brian Dillon’s books include The Great Explosion (Penguin, 2015), Objects in This Mirror: Essays (Sternberg Press, 2014), and The Hypochondriacs (Faber & Faber, 2009). He is UK editor of Cabinet magazine and teaches at the Royal College of Art, London. His new book Essayism will be published by Fitzcarraldo Editions in June 2017.