Opulence and ruin: six works by the veteran sculptor. 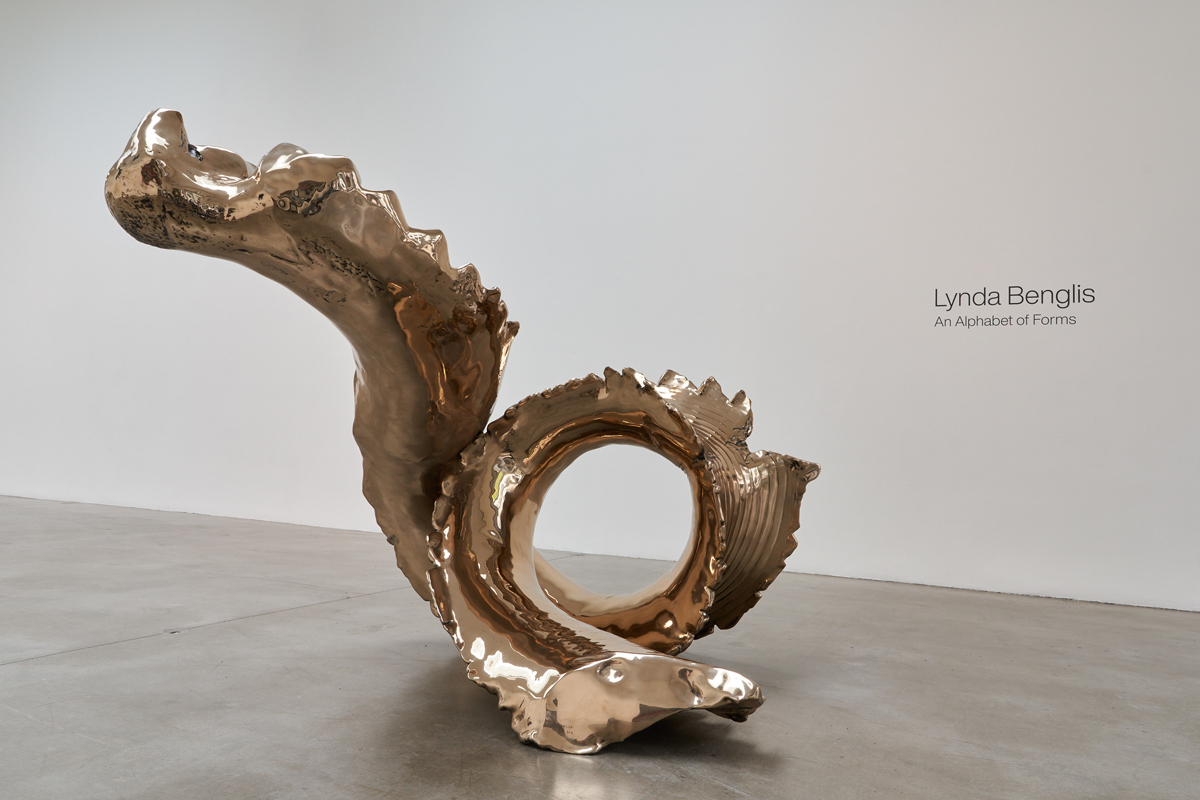 My love for Lynda Benglis’s work dates back to my first encounter with it—in the 1990s, in a class on women artists at the School of Visual Arts in New York, taught by feminist painter May Stevens. On a day devoted to Post-Minimalism’s female practitioners, Benglis commanded a substantial stretch of the slide carousel—after the wry and moody, neutral-hued statements of Eva Hesse, if I recall correctly, and maybe also the drably elegant, messed-with geometries of Jackie Winsor (who was also my teacher). But my enduring impression of Benglis from that lecture was formed by the juxtaposition of just two projected images. The first showed one of her protoplasmic polyurethane foam works from the late 1960s, a layered Day-Glo puddle on the floor. Its aerated sheen evoked puff paint, gymnastic mats, taffy; its implied movement suggested oozing lava and the Blob as well as Color Field painting, a 3D Morris Louis or Helen Frankenthaler crawling across the floor, a critical synthesis of postwar abstraction in the form of gorgeous vomit. There’s an irresistible sense of threat, I think, in everything Benglis has done.

But if then I understood Benglis’s provocation as a brilliantly caustic prank separate from her true, abstract oeuvre—occupying a sidebar to the territorial affront of her blaring plastic pours, et cetera—I later came to understand it as conceptually and even aesthetically continuous with a career-spanning challenge to decorum, broadly defined. Her use of metallic, neon, or phosphorescent color, melodramatic displays of overflow and excess, and uncouth gender satire derive from the same, flexibly calibrated impulse to agitate. In the same issue as Benglis’s eyebrow-raising spread, historian-critic Robert Pincus-Witten, preeminent theorist of Post-Minimalism, quotes her: “She wishes to ‘question what vulgarity is. Taste is context.’ ” 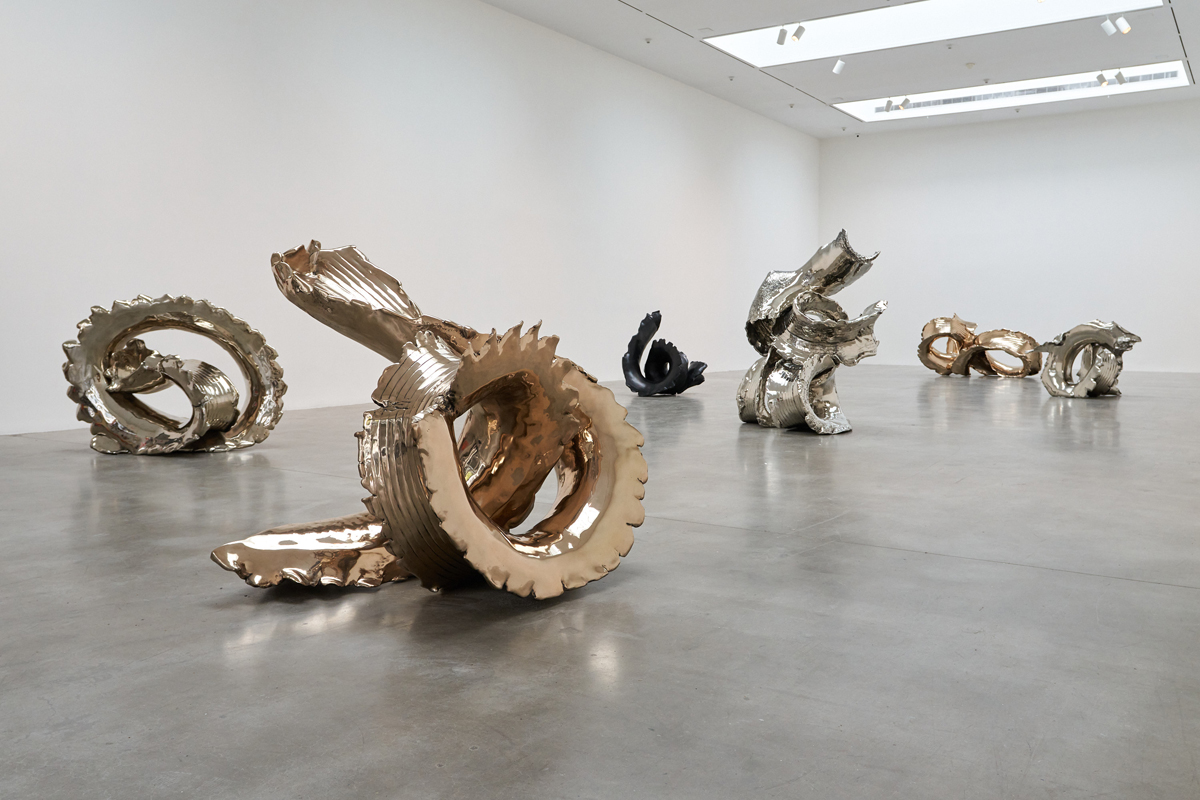 Yet, you could say the six recent sculptures in her new show, An Alphabet of Forms, at Pace are (like much of her work, really) totally classy. They have a mythic air, both opulent and ruined, resembling quickly curlicued and scrunched ribbons of melted wreckage peeled from a chariot or ship. Resting on the floor in a spare but inviting scattered arrangement, the burnished, super-reflective bronze forms seem to be unfurling or contracting, halted in some in-between state. Their scale isn’t human; they’re lion- or bear-proportioned maybe—fearsome, but not Brobdingnagian, though it does sometimes seem like the pieces’ ragged edges were pressed by a giant thumb.

The mystery of their construction is solved, at least in part, by learning, from the gallery’s press materials, that the artist began the pieces as small hand-modeled works, which were subsequently 3D scanned and blown up. So their indentations were in fact made by pinching fingers, and the striated inner sides of the slightly concave strips were produced, I imagine, by wrapping clay around rope or cord, then slitting or pulling the soft casings apart lengthwise. They’ve been ravaged, then casually reorganized. The silvery Power Tower (2019) is the tallest work on view, at over seven feet; it’s also the most mangled and squished, lending it a triumphant, if tenuous, resurrected quality. 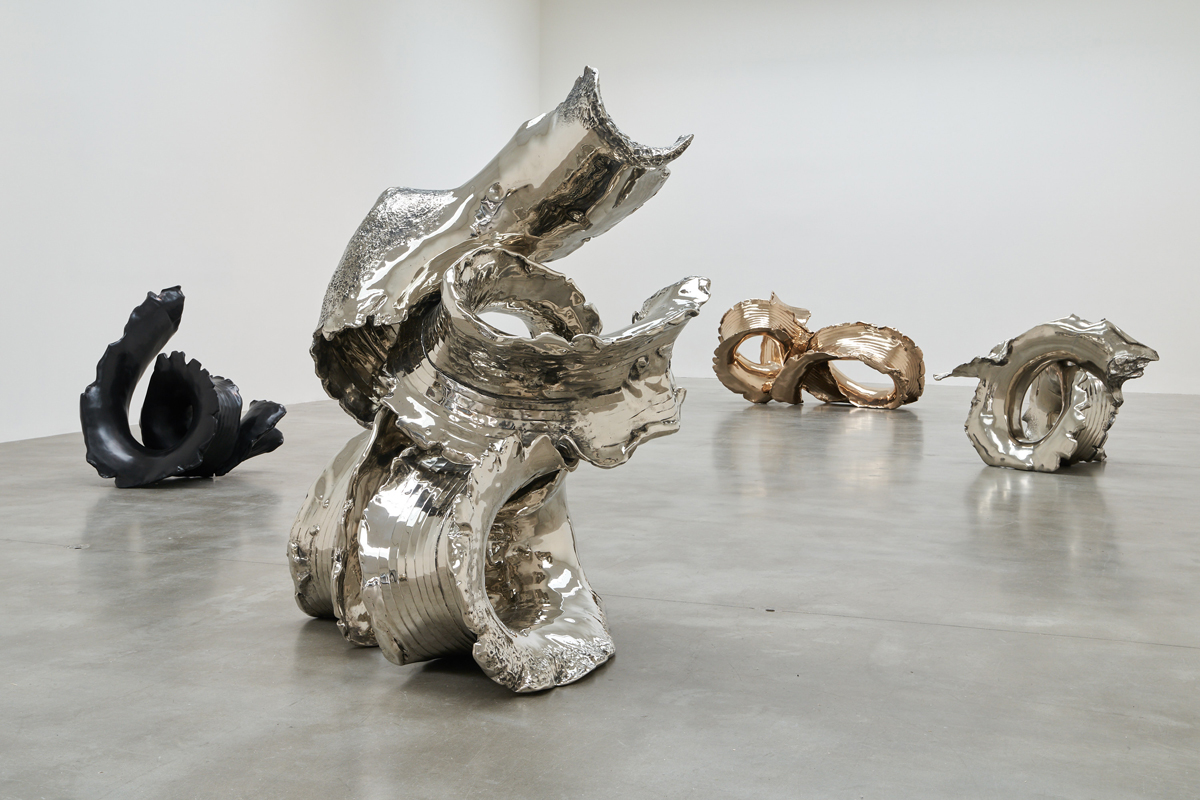 If you sit with the show for a while, though, its gestures, which have been exaggerated by the digital enlargement process, seem—despite their bold grace—a little goofy, operatic, purposely tacky even. The sculptures’ monumentality and bronze-ness seem a touch absurd. (It wouldn’t be the first time Benglis used the traditional material to flag irony: in 1974, she made a mold of her famous bicephalic dick, the veiny Artforum prop, for the bronze-cast Smile.) Vulgarity is fugitive here—I didn’t see it at first—and it slips away in the blink of the eye, outweighed or reframed by the artist’s other recurring formal concerns.

From the beginning, fundamental to her rejection of Minimalism, Benglis eschewed a signature material and refused to focus on a single artistic “problem”—she made lumpy wax reliefs; formed puddles, trails, and cascades of viscous latex or plastic; folded or pleated chicken-wire armatures; encrusted volumes with gesso or wrapped them in gold leaf. Despite this enduring restlessness, certain things resurface in her work, bringing with them the rich associations of their previous occurrence. 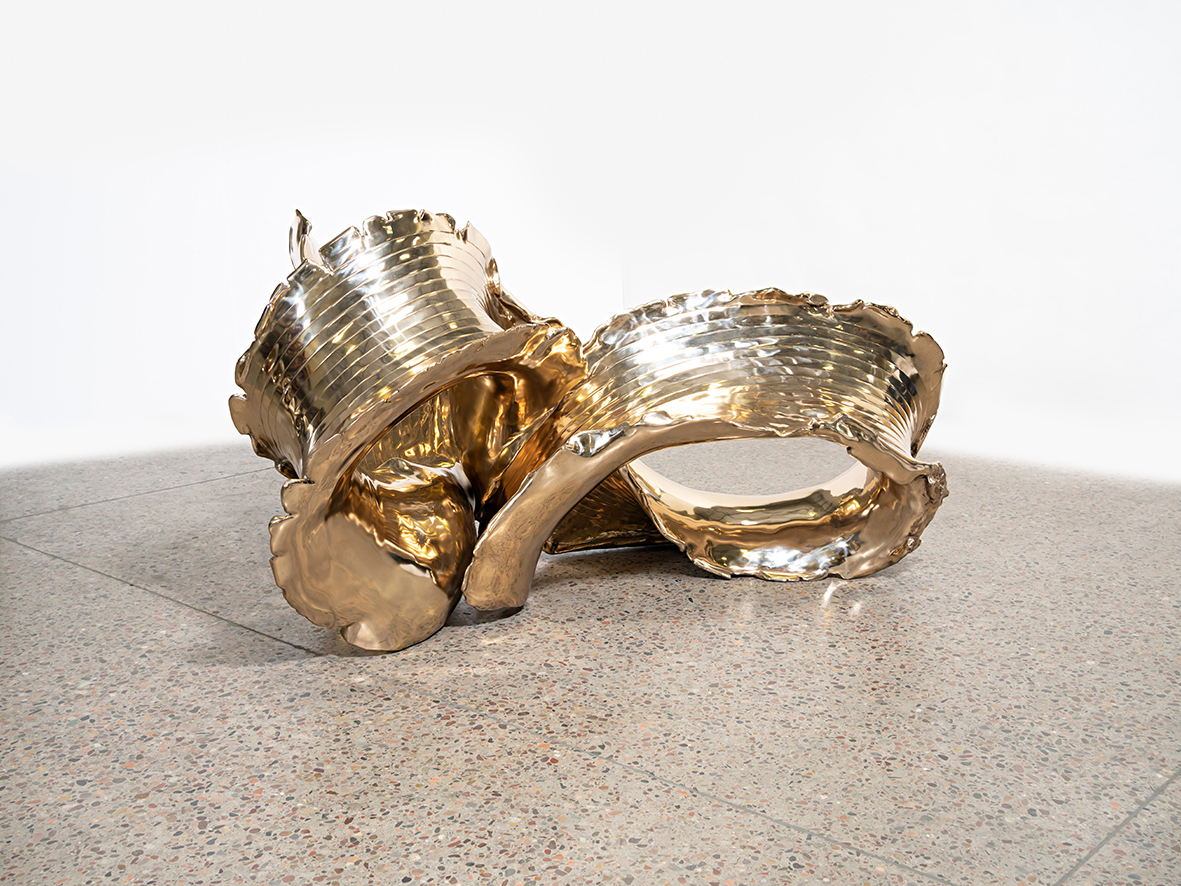 The knot, a Pleistocene technology, possibly older than the use of fire, is a favorite motif; Benglis has isolated the ubiquitous, prehuman, infinitely variable figure to powerful effect in her process-based artistic practice over the past half century. Though most or all of the pieces on view at Pace—such as the verging-on-glitzy, gold-tone Yellow Tail (2020), with its disheveled figure-eight form, and the vortex- or corkscrew-shaped Black Widow (2021), with its lustrous dark patina—are not knots exactly (if pulled taut they would unravel; their untwined loops would flatten or become mere twists, not tie closed). But they share with earlier knot-based works their sense of movement and drapery, their engagement with a quotidian action, alternately decorative, expressive, or utilitarian. 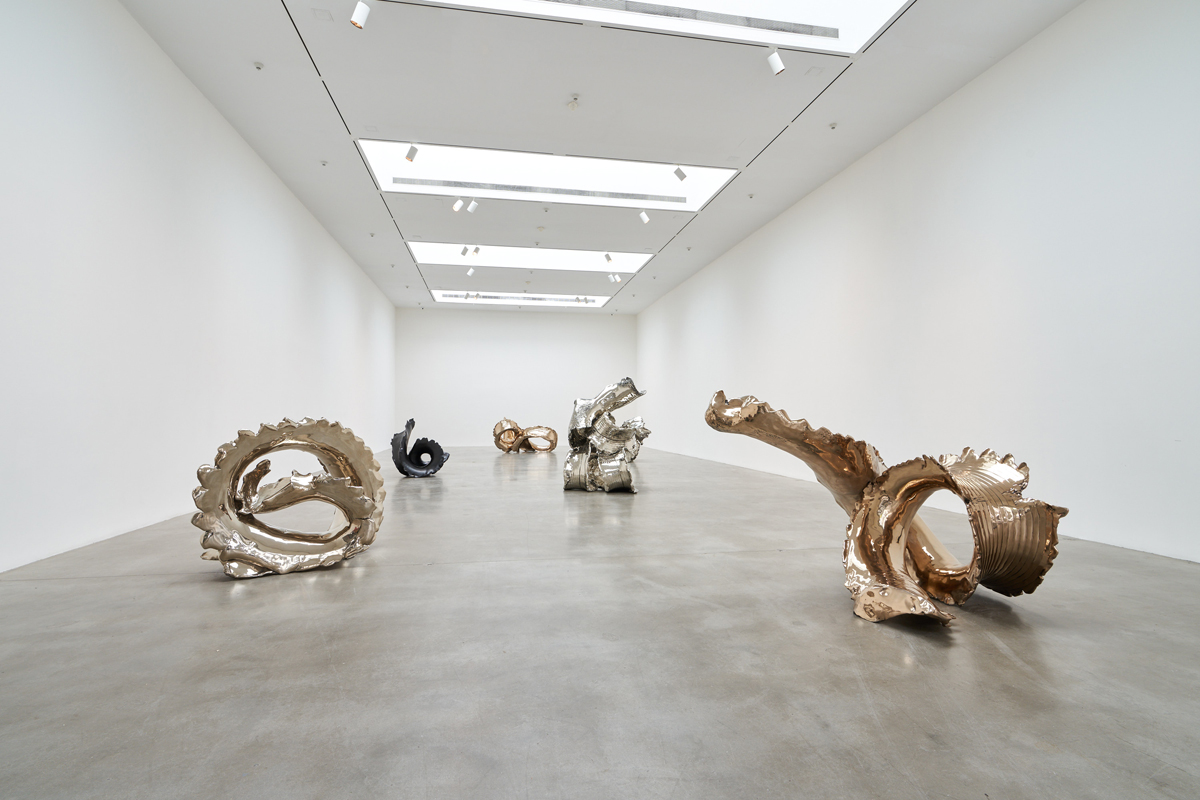 Benglis’s coiled and tangled experiments are described by PS1 founder Alanna Heiss in a video walkthrough of An Alphabet on the Pace website. She recalls presenting Benglis’s scrappy Sparkle Knots, an exhibition of small-scale, wall-based sculptures—wayward challah, bow, and cravat forms—accompanied by strings of colored Christmas lights, at the Tribeca alternative space the Clocktower during the 1973–74 holiday season. “They weren’t glamorous like they are now,” Heiss says, comparing the modestly sized, glitter-flocked wire-and-bunting constructions of yore to today’s bronze hulks, “they were quite messy, but they were still very libidinous . . . you wanted it. You wanted one.”

I would’ve wanted one, it’s true—I want one now. And if the cleaned up, differently seductive installation at Pace seems a world away from the punk economy and imprecision of the Clocktower show, the new sculptures retain that cocksure and menacing Benglis essence. It’s just more low-key, grown-up.