The Whitney Museum surveys twenty-five years of
assemblage and rearrangement. 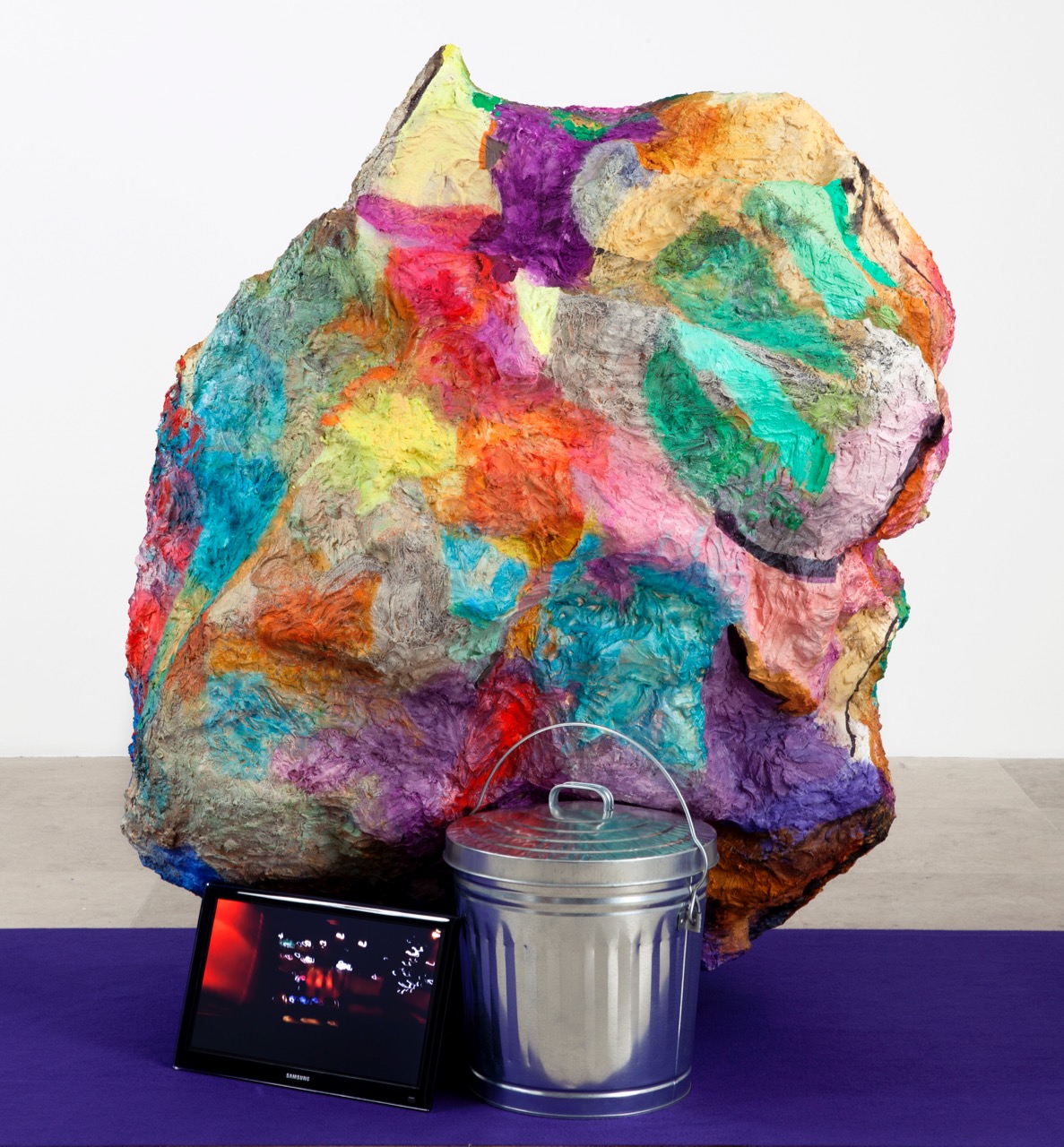 A retrospective can be an opportunity to gorge on a particular strain of beauty, or it can be revelatory for its chronological amassment of an artist’s output. And of course, it can be both. Rachel Harrison’s mid-career survey, Rachel Harrison Life Hack, is neither. Her art—composed of discrete systems of logic, operating within shifting frames of reference, tethered to pop culture’s fleeting micro-historical moments, distinctly site-sensitive if not site-specific—is unlikely, even in all its visually scattershot glory, to carry you away as a purely aesthetic experience. And viewing it in bulk doesn’t necessarily crystallize the through lines for a user-friendly narrative. It’s not impossible to catch a glimpse of the forest while decoding the trees (that is, the sculptures, environments, photo series, and drawings of Amy Winehouse). But twenty-five years’ worth of Harrison’s work, famously makeshift in look, corralled together, risks appearing not precise but random—like satellites of garbage warehoused in the pristine galleries of the Whitney’s fifth floor. 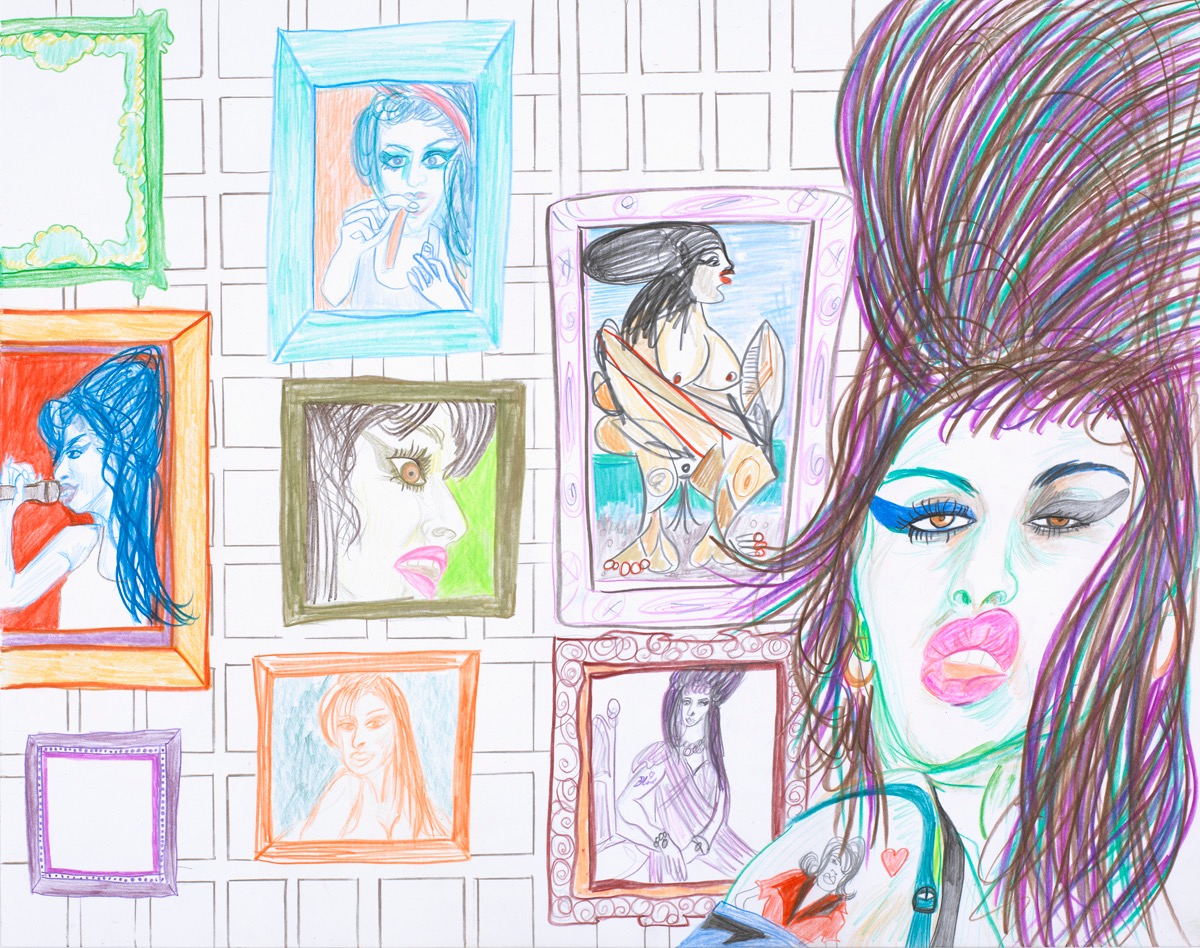 No one is more attuned to the hazards of the occasion than the artist herself, and she’s devised a number of tricks—hacks, you might say—to cope. Harrison has long worked in a mode of assemblage and rearrangement, shuffling together consumer culture’s bits and pieces with appropriated or original photographs, hand-modeled and -painted elements, as well as unique polystyrene forms. Now, she views her own finished pieces as artifacts of the past, subject to recombination, whether using documentation of an installation as raw material for a new version of it or recycling her sculptures as landmarks and characters within provisional theatrical sets to suggest new meanings. The survey (and the work it comprises) is, in spirit and sometimes in look, rather like its viral namesakes: the life hacks that the internet’s thrifty inventors propose in their often unintentionally bleak, clickbaity visions of making do (holding a cookbook open with a pants hanger, rigging an iPhone “speaker” from a toilet-paper tube, or fixing flip-flops with bread-bag tabs, to name a few). 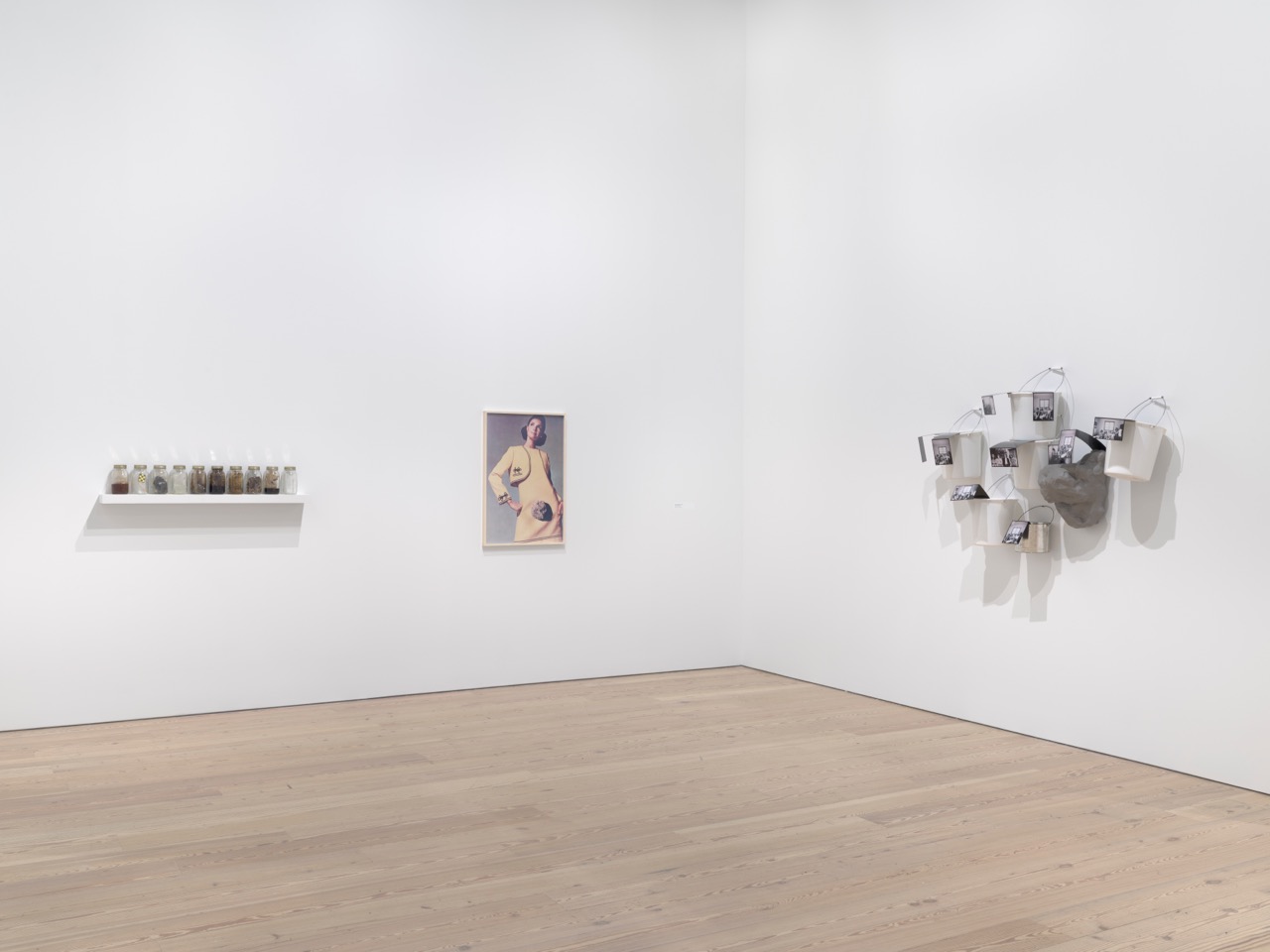 Harrison’s career-founding, cavalier DIY aesthetic particularly shines in the survey’s innovative nonlinear moments. Chronology, though, is not altogether eschewed. The first section features early works, from the 1990s, including Dinner (1991). The unassuming sculpture is composed of murky mason jars on a ledge, containing a now decades-old meal ordered at the defunct East Village restaurant Flamingo East during the reception of Harrison’s first group show in Manhattan, Open Bar. A venue above the restaurant, often used for DJ sets or drag shows, and sometimes as a gallery, hosted the exhibition. Course by course, Harrison brought the food upstairs in Ziploc bags (later sealed in fly-deterring jars), and there arranged them in a grid—her contribution to the show. Dinner is an outlier for its simplicity, but not for its attitude. It engaged the restaurant’s kitchen workers to produce a made-to-order readymade, wryly subbed decomposition for deconstruction, and dealt a grunge-era blow to art’s alleged aura with its moldy, science-experiment presence. 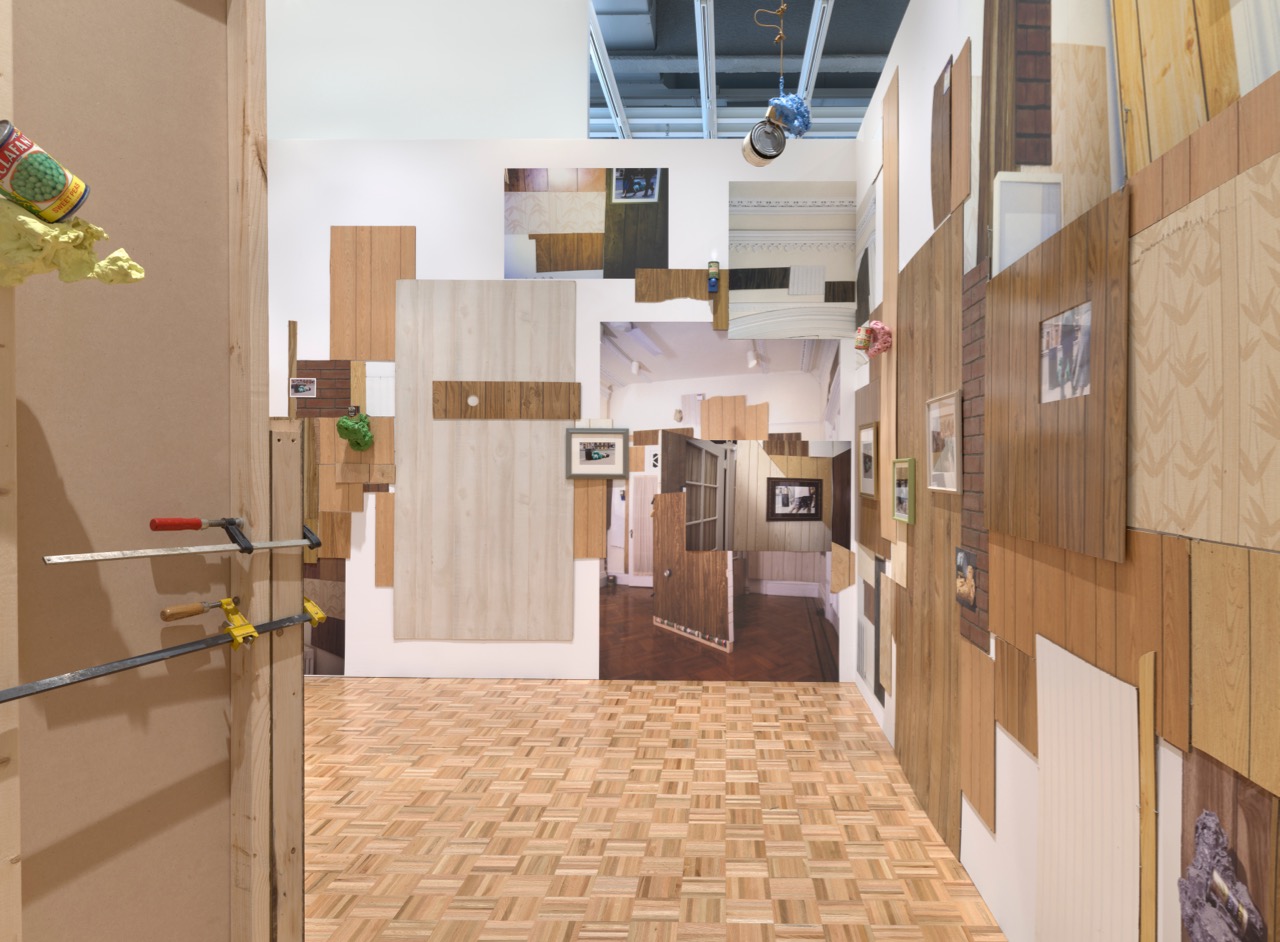 Rachel Harrison Life Hack, installation view. Pictured: Should home windows or shutters be required to withstand a direct hit from an eight-foot-long two-by-four shot from a cannon at 34 miles an hour, without creating a hole big enough to let through a three-inch sphere?, 1996 / 2019. Photo: Ron Amstutz.

A reinterpretation of Harrison’s first solo exhibition at the Brooklyn-brownstone gallery Arena shows her interest in jokey formalism and absurdist seriality in full bloom by 1996. A wall-spanning collage of fake-wood paneling, in its many colors and textures, achieves a cubist shattering of space, with enlarged photos of the original show ingeniously adding a fresh trompe l’oeil dimension. Assorted brands of canned peas form lines or perch on colorful papier-mâché meteorites, while framed images of seafoam-green trash bags piled on a curb constitute another arbitrary category of things that Harrison dares you to make sense of. This signature strain of provocation is refined in the funnier 1:1 (Wonton: John), from the same year. In a nod to Marcel Broodthaers’s germinal accumulation of eagles, she asserts a relationship between a collection of thirty-eight Johns (including a portrait of seventeenth-century Irish aristocrat Lord John Fitzgibbon and a poster of John Stamos) and a giant dish of polymer- and unfired-clay wontons in a range of sizes and hues. The pinched and folded dumplings recall feminist-conceptualist Hannah Wilke’s chewing gum “cunts” but, next to the Johns (the name is, remember, also slang for sex-work clients), their rumpled flaccidity is an even more directly emasculating comment on patriarchal art history and museological display. 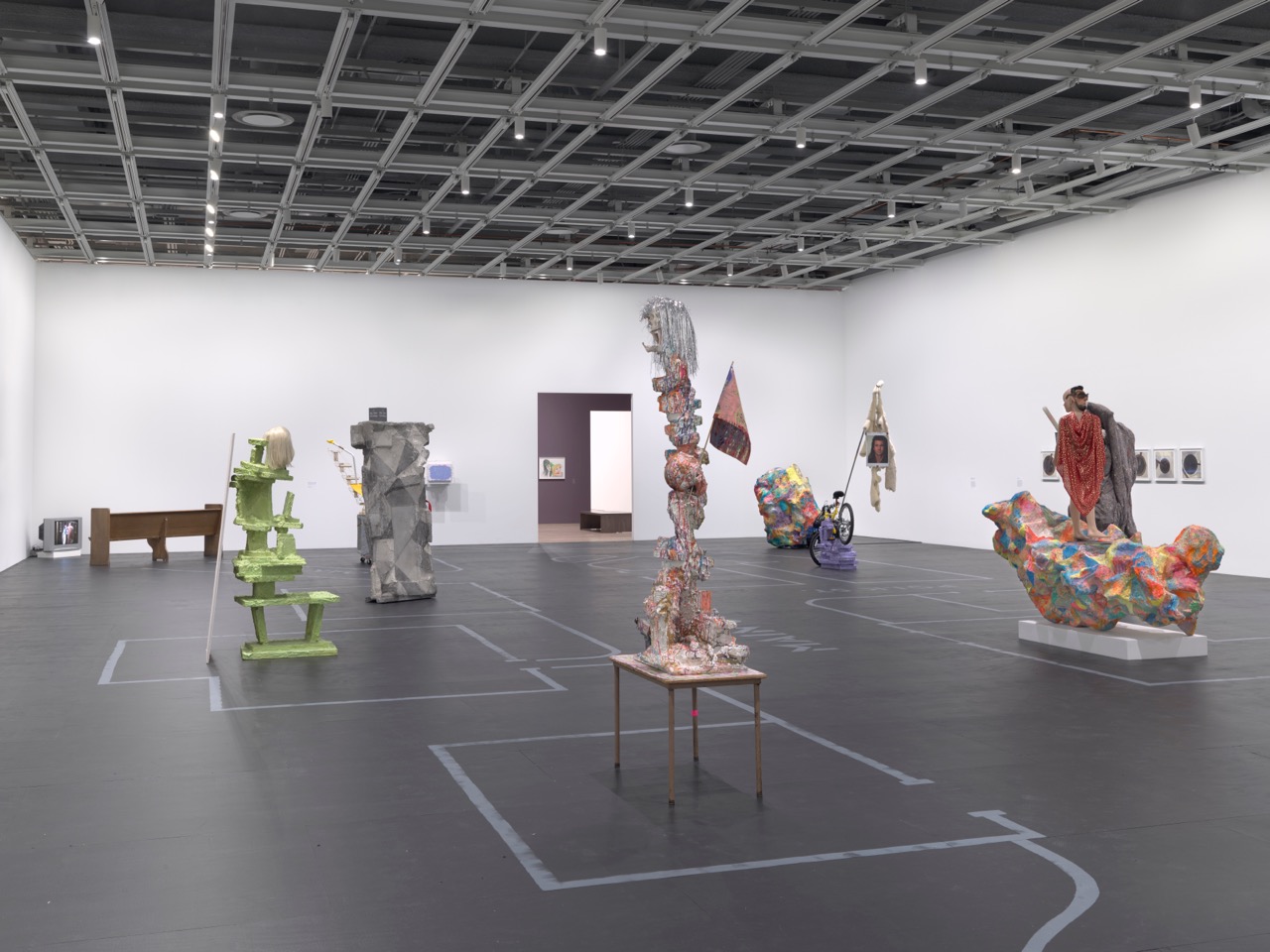 Before long, Harrison’s stroll down memory lane becomes a literal map to wander, in an installation reminiscent of the stark set for Lars von Trier’s Dogville: gray lines and stenciled street names on a black plywood floor plot space for her sculptures. This stylish framing heightens the satirical/salutary resemblance of her cobbled-together constructions to public monuments, each one remarkable for the economical double function of its constituent parts as structural elements and cultural references. Huffy Howler (2004), named for the bike at its center, is skewered by a metal pole; binder clips attach a headshot of a young Mel Gibson to the sheepskin pelts hanging from its end. While Gibson’s image might now bring to mind any number of roles or DUI arrests, in 2004 he made news for directing The Passion of the Christ, controversial for its graphic depiction of torture and crucifixion in addition to its anti-Semitism. In the ridiculous, poignant Huffy, he appears as a cult leader or political candidate championed (or abandoned) by the bike’s absent rider. Viewed from another angle, his portrait might be seen as a convenient placeholder for a head in a slapdash work of abstract figuration—a man charging at you on horseback, maybe. 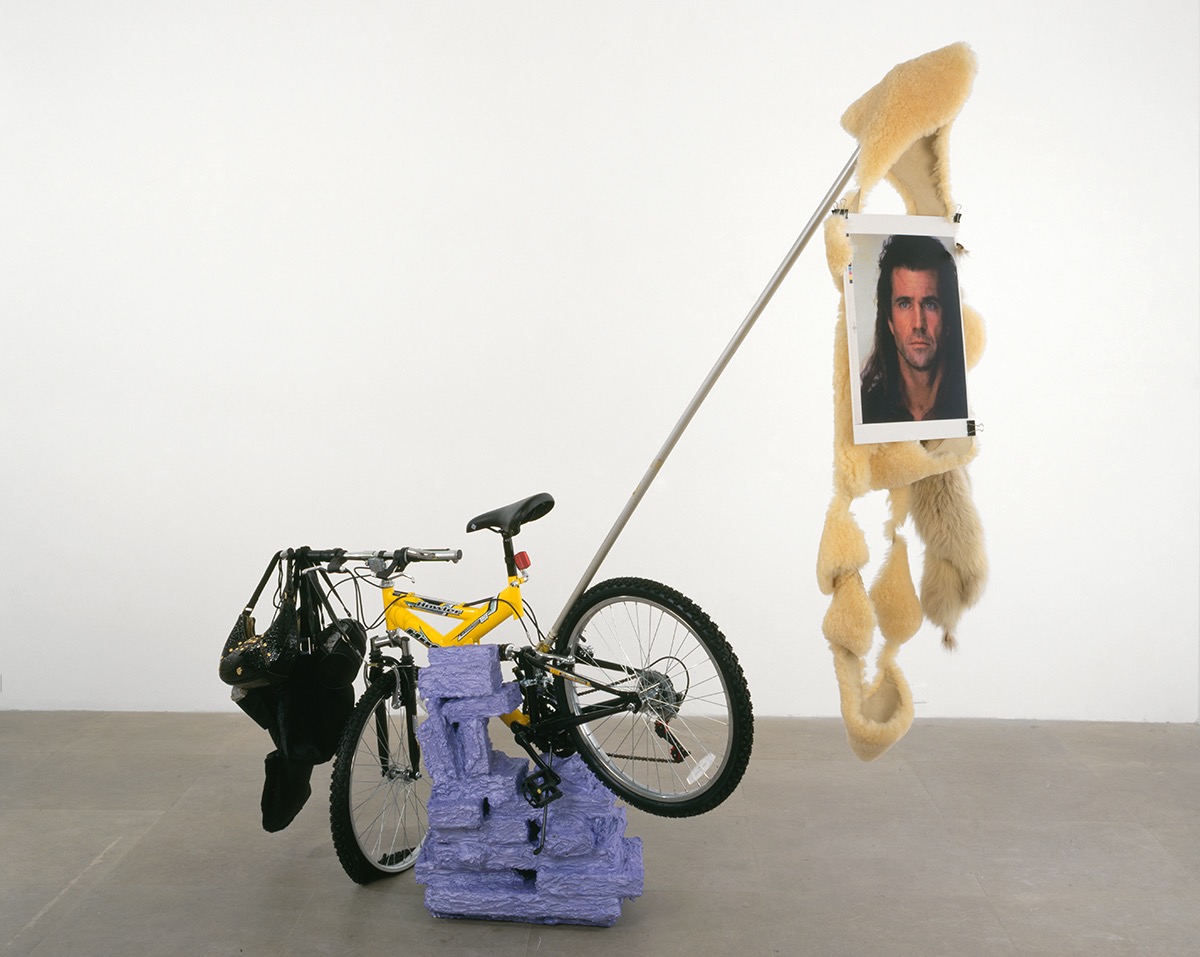 Harrison’s frequent invocation of the figure—through her use of photographs, wigs, drapery, and mannequins—makes for easy anthropomorphizing. And in her grand finale she plays up the tragicomic personalities of her sculptures, arranging fifteen of them, from this millennium, like performers in the round. She’s left enough space around each “actor” in the dioramic cluster for viewers to absorb its individual attributes. There’s Al Gore (2007), a stucco-textured block a bit taller than a standard door, dappled with the verdant and pastel hues of a Monet, pointedly fitted with a Honeywell thermostat; Vampire Wannabes (2010), an angular, multicolored thing serving as a shelf for an AirPort Extreme Base Station; and Travis Gregory, a deft visual distillation of the year it was made, 2016. An Antonin Scalia mousepad—such a thing exists—rests at the base of a jagged peach obelisk that, with its finger-like protrusion at the top, seems to flip us all the bird. 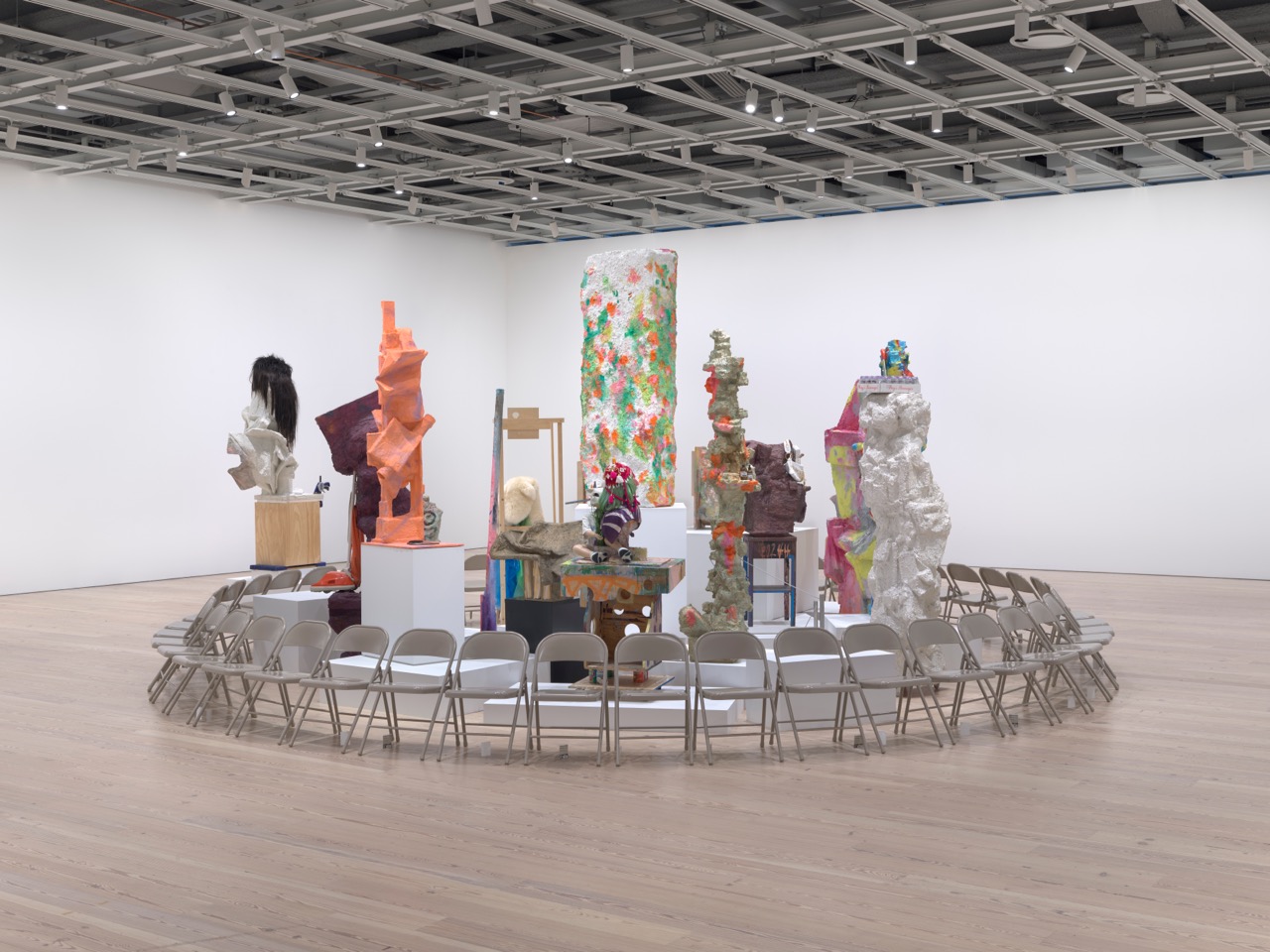 In a twist that runs counter to a reading of this installation as a stage, though, Harrison has ringed it with folding chairs that face out, like seating around a statue at a park. Nearly invisible for their ubiquity, but also, I’ve always thought, quite beautiful for their satin-finish, putty-colored planes and diagonals, the cheap chairs make for a serene border. As demanding as her work can be to look at, much less understand, Harrison does offer an out. She’s found a way to be casual with her own trenchant, busy, sometimes bleak, specificity. The ultimate, broadly applicable life hack suggested here may be to sit down, with your back turned, at least for a spell. Meaning is there for the taking, but it can also play in the background like an anxious buzz.