A big show for a little mansion. 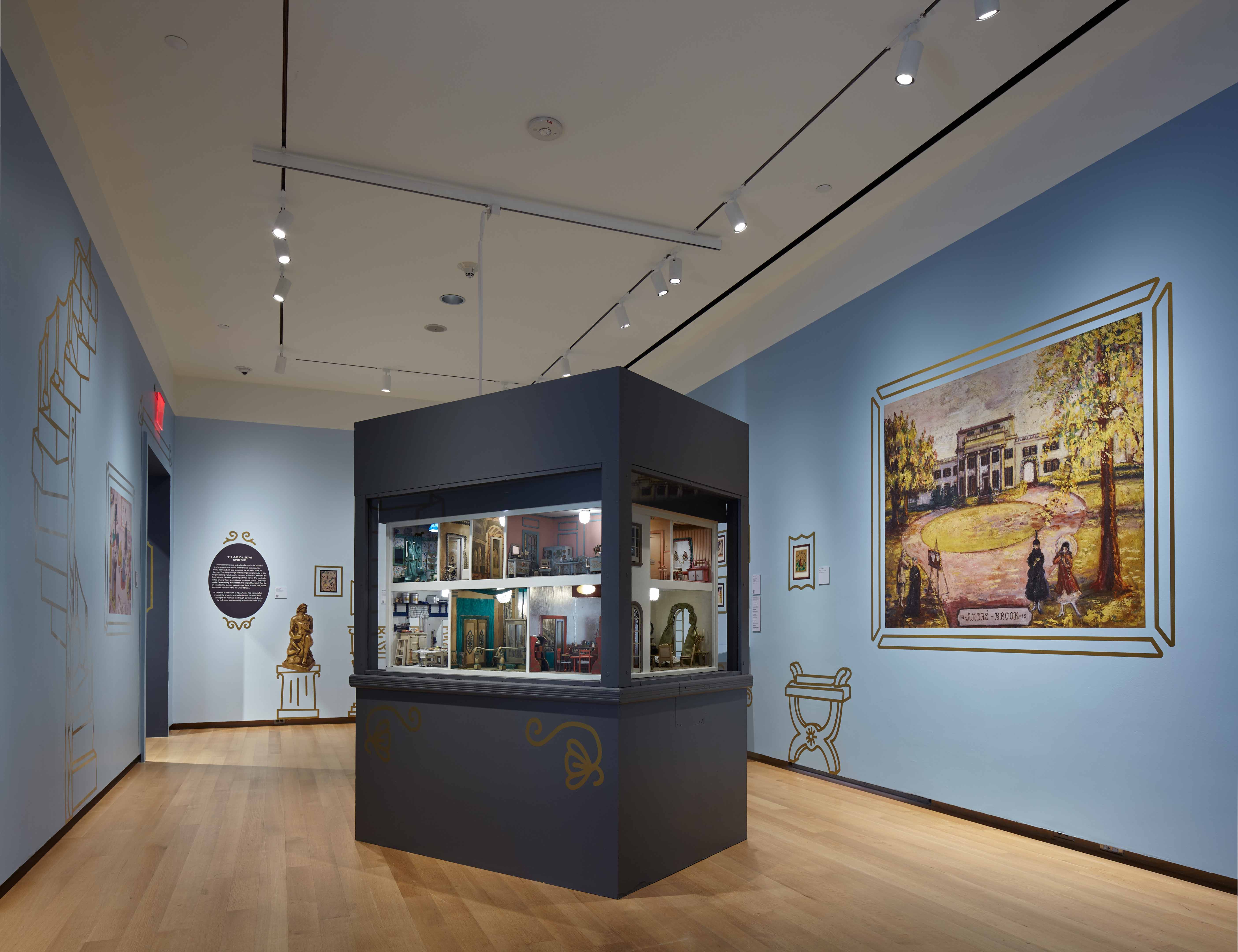 The Stettheimer Dollhouse: Up Close, Museum of the City of New York, 1220 Fifth Avenue, New York City, through March 14, 2021

On permanent view at the Museum of the City of New York since 1945, the Stettheimer Dollhouse—a nonpareil artifact of the interwar avant-garde and an object of absorbing beauty—is usually presented with little fanfare. But in a new exhibition celebrating the seventy-fifth anniversary of the institution’s acquisition of legendary Manhattan salonnière Carrie Stettheimer’s magnum opus, that is rectified. The plush unpeopled mansion glows seductively, illuminated by its tiny chandeliers in a black display case at the center of a dedicated gallery; the walls are painted a dreamy blue to match the filigreed furniture and satin drapes of the dollhouse’s master bedroom. And though the work’s previous, more perfunctory installation never bothered me before, now I wonder how the museum—after the sublime viewing experience offered by The Stettheimer Dollhouse: Up Close—can ever go back. 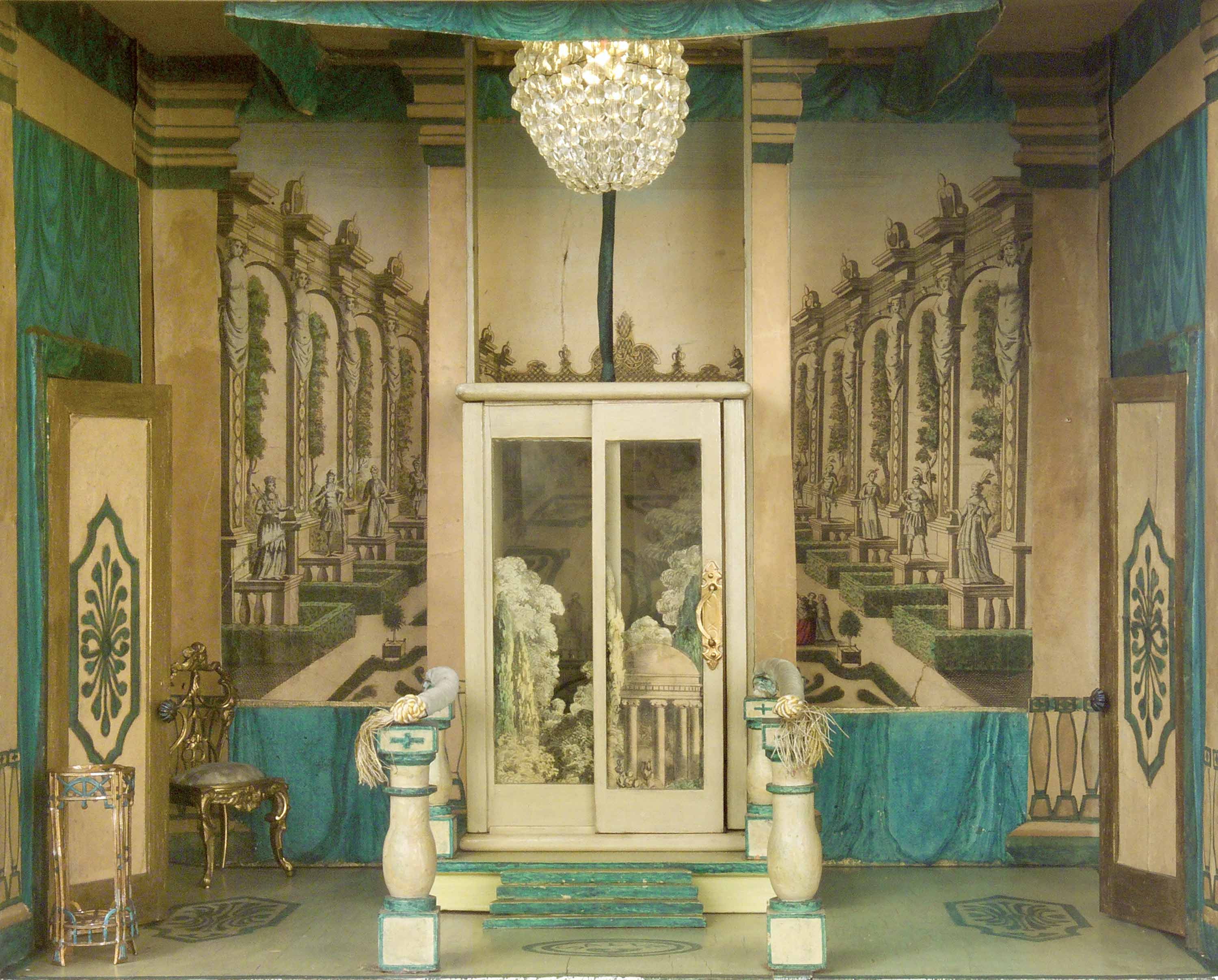 Between the years of 1916 and 1935, Carrie, sister to the painter Florine and the writer Ettie Stettheimer, designed and decorated the spectacular, sophisticated, twelve-room miniature home. From the trompe l’oeil panels depicting a Versailles-like garden in the foyer to the signs of the zodiac emblazed on a bathroom floor, the fabulous edifice forms a detailed picture of the Stettheimers’ household—their ménage was a complex production involving frequent and innovative entertaining, which Carrie, the eldest, managed. (The unmarried sisters, born to a wealthy German-Jewish family, lived with and cared for their mother—they were deserted in childhood by their father—spending years in Europe before settling in New York at the start of WWI.) In Ettie’s 1947 foreword to a book about Carrie’s unfinished parallel world, she explained the obstacles to its full realization: “Although my sister was an extremely successful and competent housekeeper, as our friends will confirm, she had no liking whatever for this job, and this, I imagine, no one suspected.” She added, sympathetically: “Doing what one doesn’t enjoy takes a lot of energy . . .” 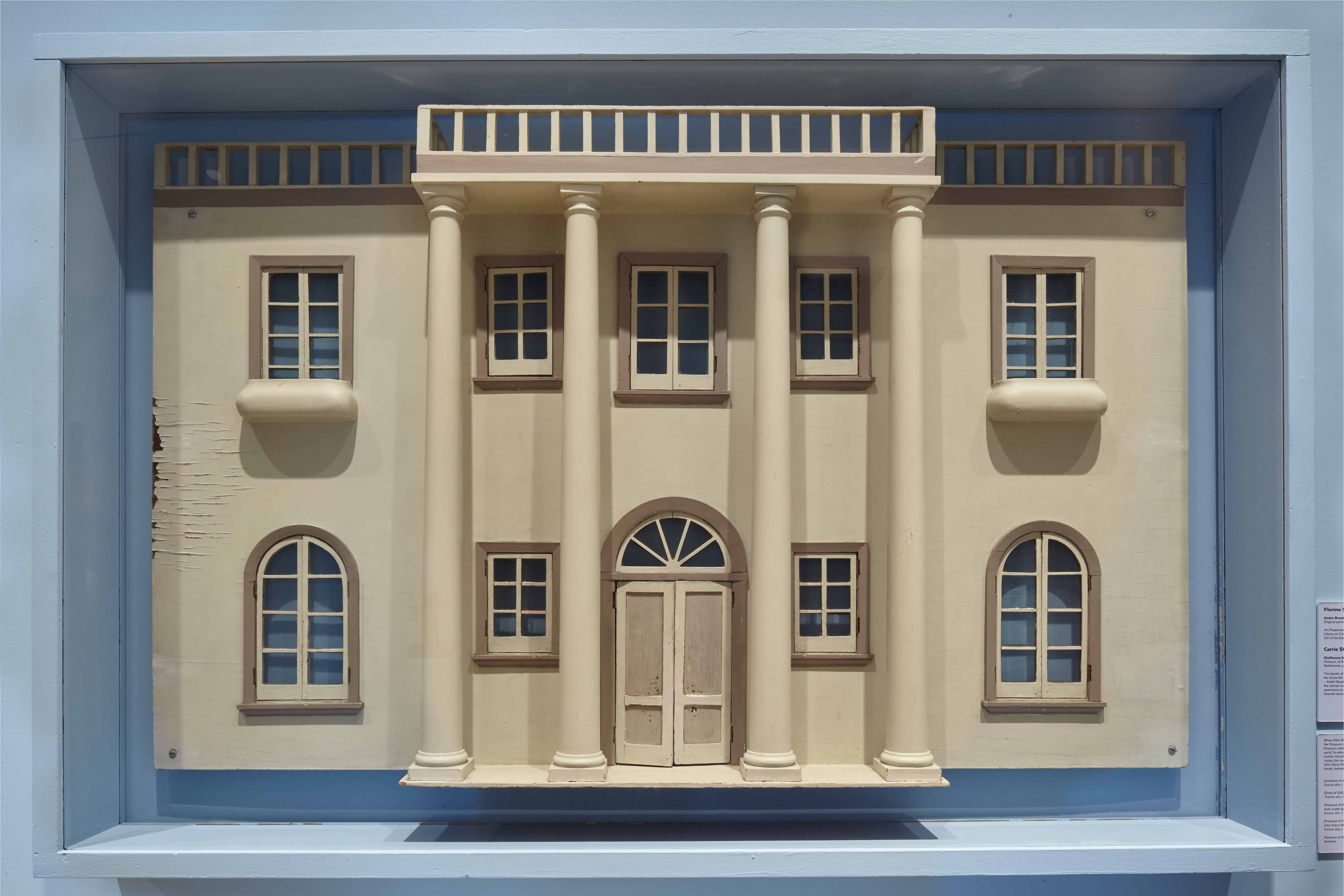 The dollhouse’s stately façade is modeled after the Stettheimers’ summer home near Tarrytown, but its furnishings reflect the whimsy and elegance of their fashionable apartment in Alwyn Court on Seventh Avenue. And, famously, its artworks map the women’s dazzling milieu of American and émigré intellectuals. The drab-hued crown jewel of Carrie’s impressive collection of miniature modernist paintings, drawings, and sculptures is a Lilliputian version of Marcel Duchamp’s Nude Descending a Staircase, No. 2 (1912), given to her by the artist himself, a friend.

Surrounded by artists, Carrie seems not to have considered herself one, but her endeavor was nevertheless undertaken with seriousness: she rented a studio in order to work on the dollhouse without interruption, and the elaborate, time-consuming project was seen by others as key to her identity. Florine, in a fantastic, space-bending, effervescent 1923 portrait of Carrie, shows her in a Schiaparelli- or Poiret-esque ensemble standing next to her creation-in-progress. 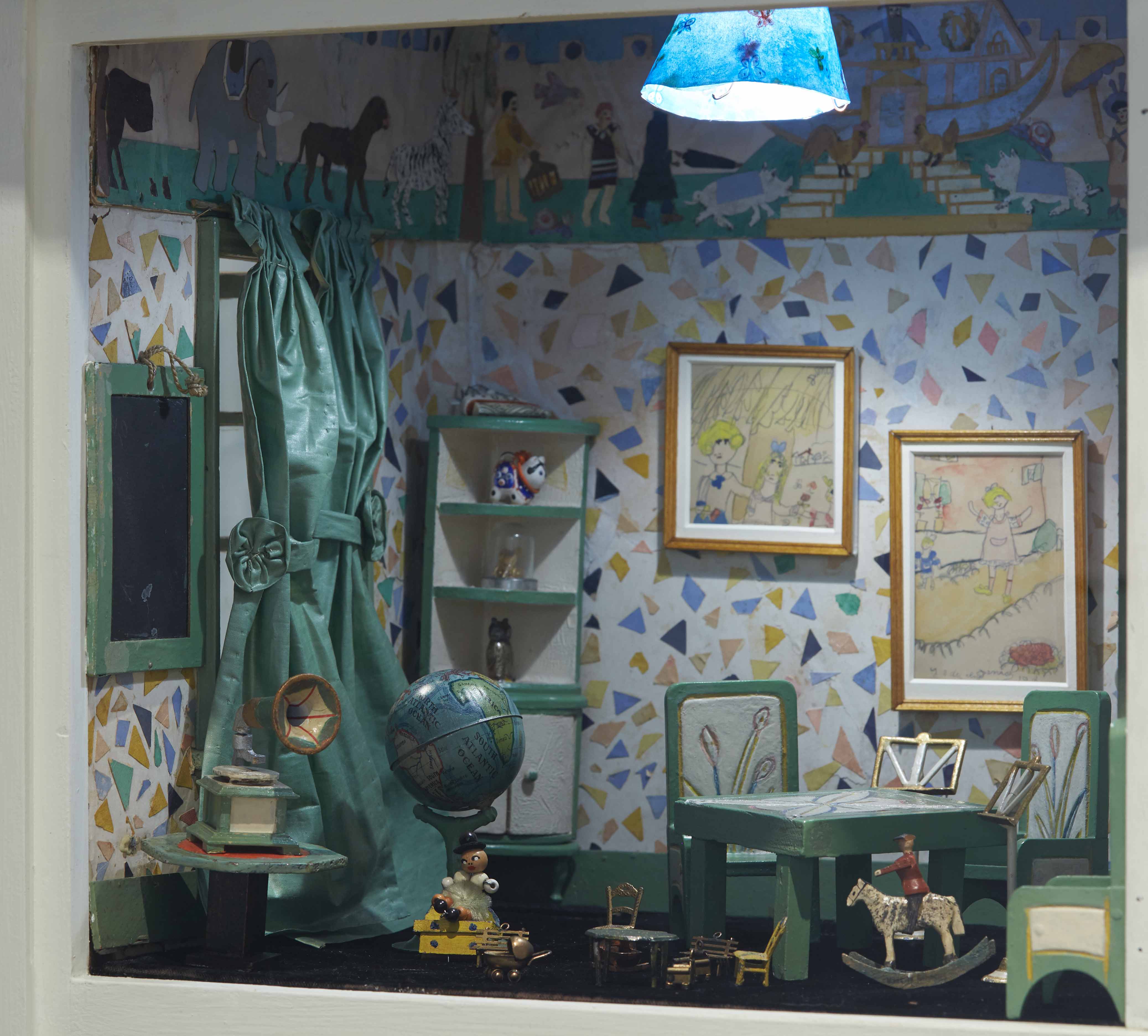 Reproductions of Florine’s paintings appear on the pastel walls of Up Close as contextualizing, ambience-establishing elements of the show, and rich color photographs offer magnified views of Carrie’s interiors. In these it’s easier to spot wry flourishes—the toy-strewn nursery’s irreverent biblical frieze, for example, which features three ladies waiting to board Noah’s ark with their umbrellas and pets; or the recursive gesture in the dining room, where an image of Florine’s portrait of Carrie and the house hangs prominently in a gilt frame. But the dollhouse’s art gallery, visible through the arched doorways of the lower terrace, is always its star attraction. 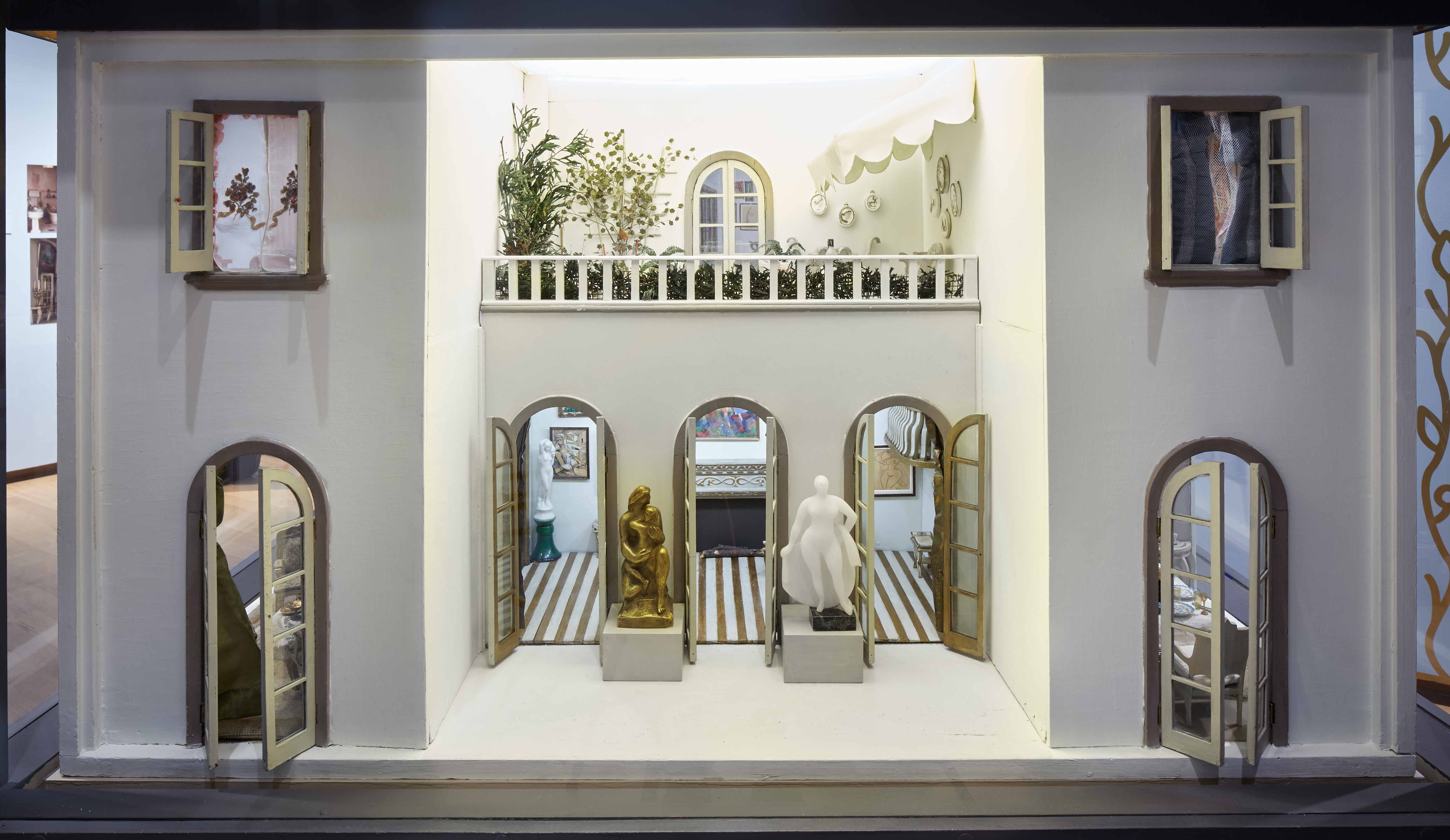 Helpfully, the keyhole vantages of the miniature salon-style installation are supplemented by enlarged prints of some of its most appealing pieces. In addition to Duchamp’s remarkable contribution, four Fauvist paintings—two streamlined nudes by Paul Thévenaz and two rougher images of bathers by Marguerite Zorach—form a lovely grid. Carl Sprinchorn’s vibrant abstraction, which takes pride of place above the dollhouse’s fireplace, also scales up beautifully, as does the charming standing figure of the alabaster Venus (c. 1925) by Gaston Lachaise. Of course, as tributes to a brilliant hostess from the un-self-serious artists in the Stettheimers’ orbit, the postage stamp– and chess piece–sized works all possess tremendous charm. 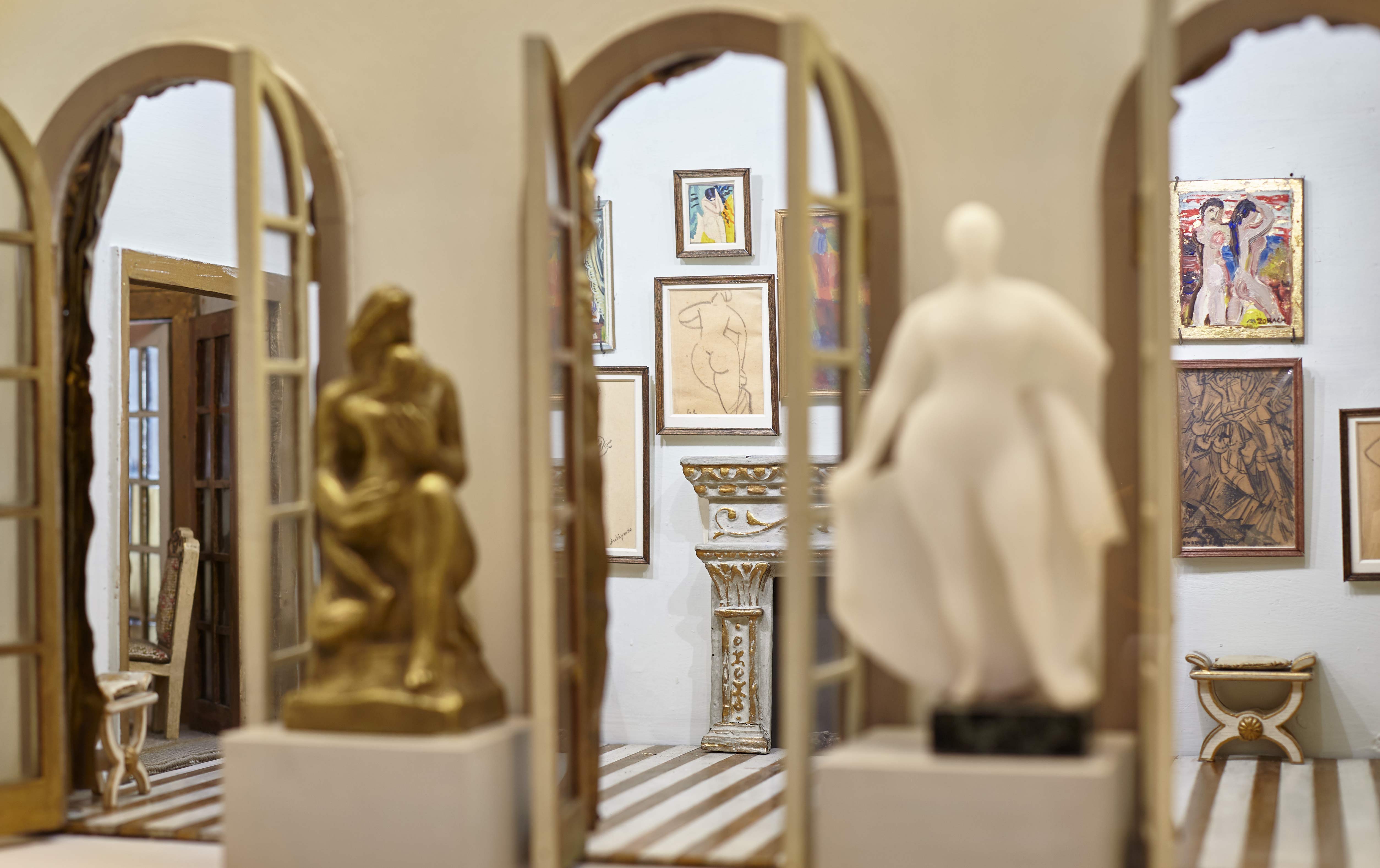 Surprisingly, Ettie, not Carrie, curated the dollhouse’s gallery (also called the ballroom). When she gave the house to the museum, after the deaths of Carrie and Florine in 1944, the grand room was empty but for five scattered Directoire benches. Twenty-eight of the artists’ gifts were stored separately; Ettie selected thirteen from the collection, and her graceful arrangement became permanent, though it’s likely that the pieces were meant to be shown in rotation. Without periodic rehangs, the majority of them are rarely seen, and so, a vitrine here, full of tiny compositions by Gela Forster Archipenko, George Bellows, and others, adds a thrilling behind-the-scenes dimension to the exhibition. 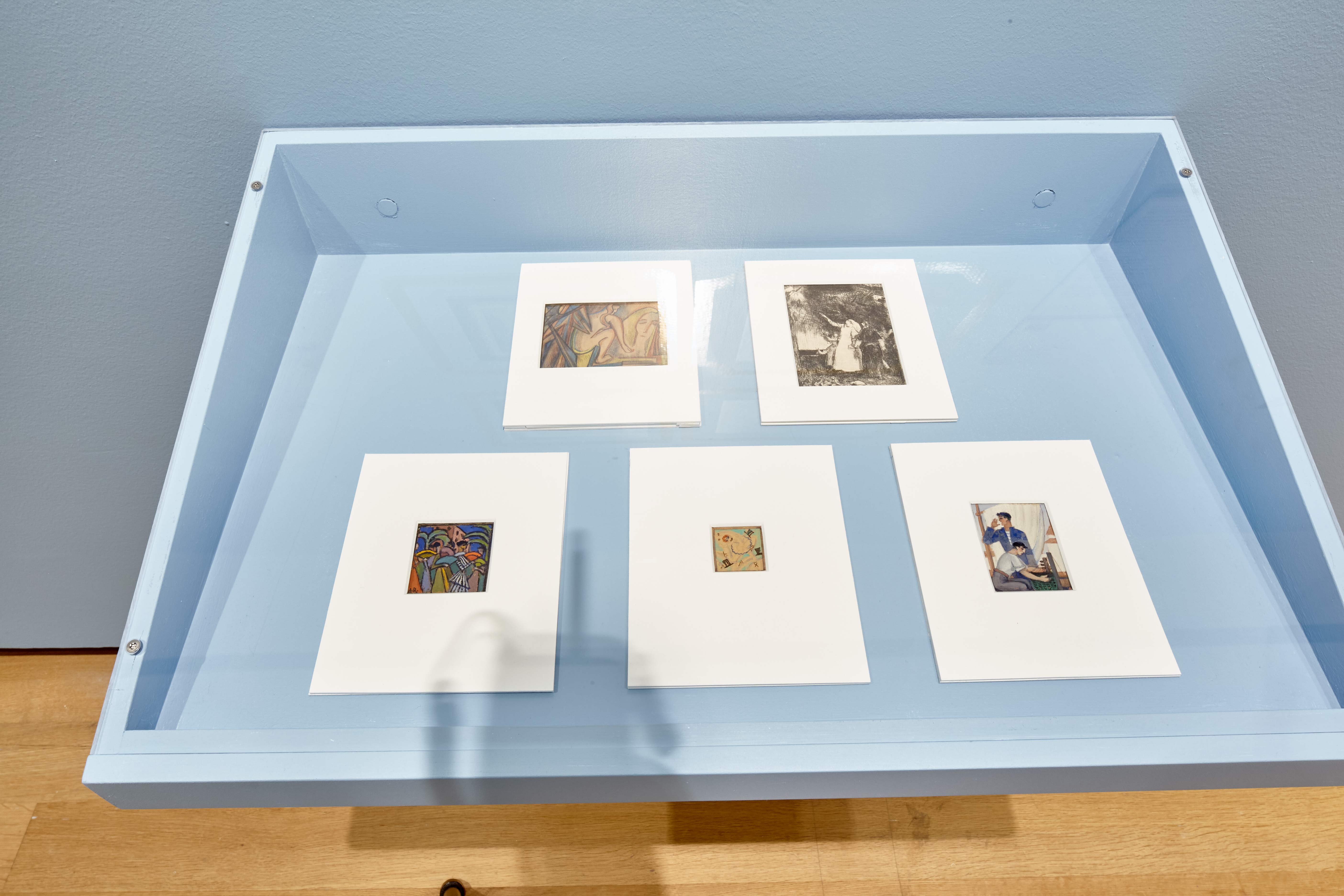 It’s hard to find fault with Ettie’s well-balanced selections, though it occurred to me, while contemplating Claggett Wilson’s unincluded gouache Basque Sailors (c. 1925) under glass, that were it on view in the house, it might, as an overtly homoerotic image, forward a fuller understanding of the glamorous spinsters—of their sartorial eccentricities, flamboyant décor, and decadent approach to entertaining. (On the other hand, Wilson’s—and Carrie’s—camp sensibility might be adequately illuminated by the devilish placement of his faux medieval, icon-style panel of a downcast angel in “the chintz bedroom,” a chamber engulfed in voluptuous peacock-floral print.) 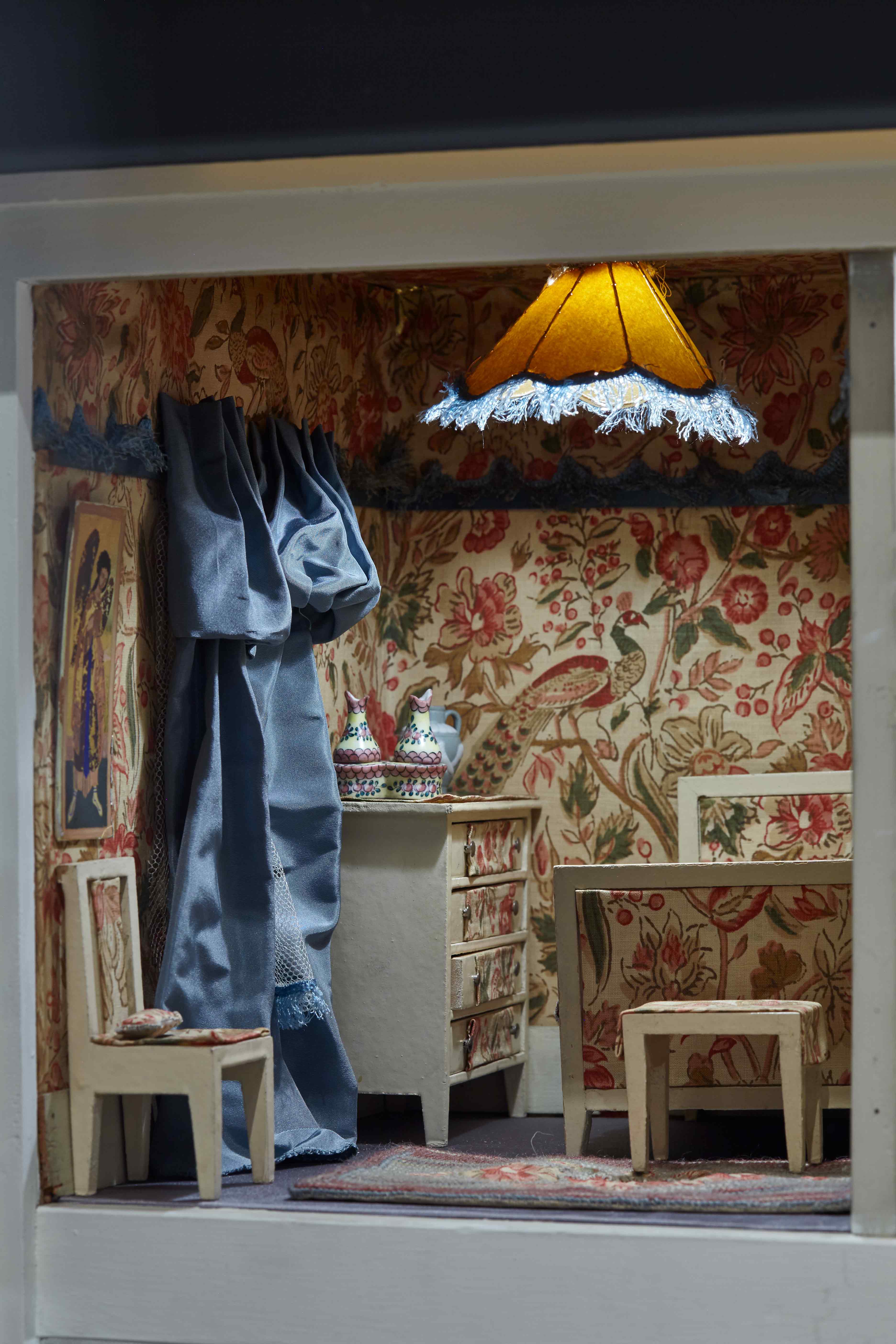 Overall, ebullient excess outweighs the melancholic air of the doll-less domicile, though it’s hard to ignore a haunting irony: with Ettie’s voice in my ear, I imagine the little house is tended to by Carrie’s housework-hating ghost. While a great advocate for its proper presentation (in 1952 Ettie wrote to the museum “heartsick” about the work’s poor lighting), she was clearly torn over its significance. In her aforementioned essay she both praised the dollhouse and mourned it as a symbol of a greater, unfulfilled purpose: “I look upon this production of Carrie’s as a facile and more or less posthumous substitute for the work she was eminently fitted to adopt as a vocation, had circumstances been favorable—stage design.” 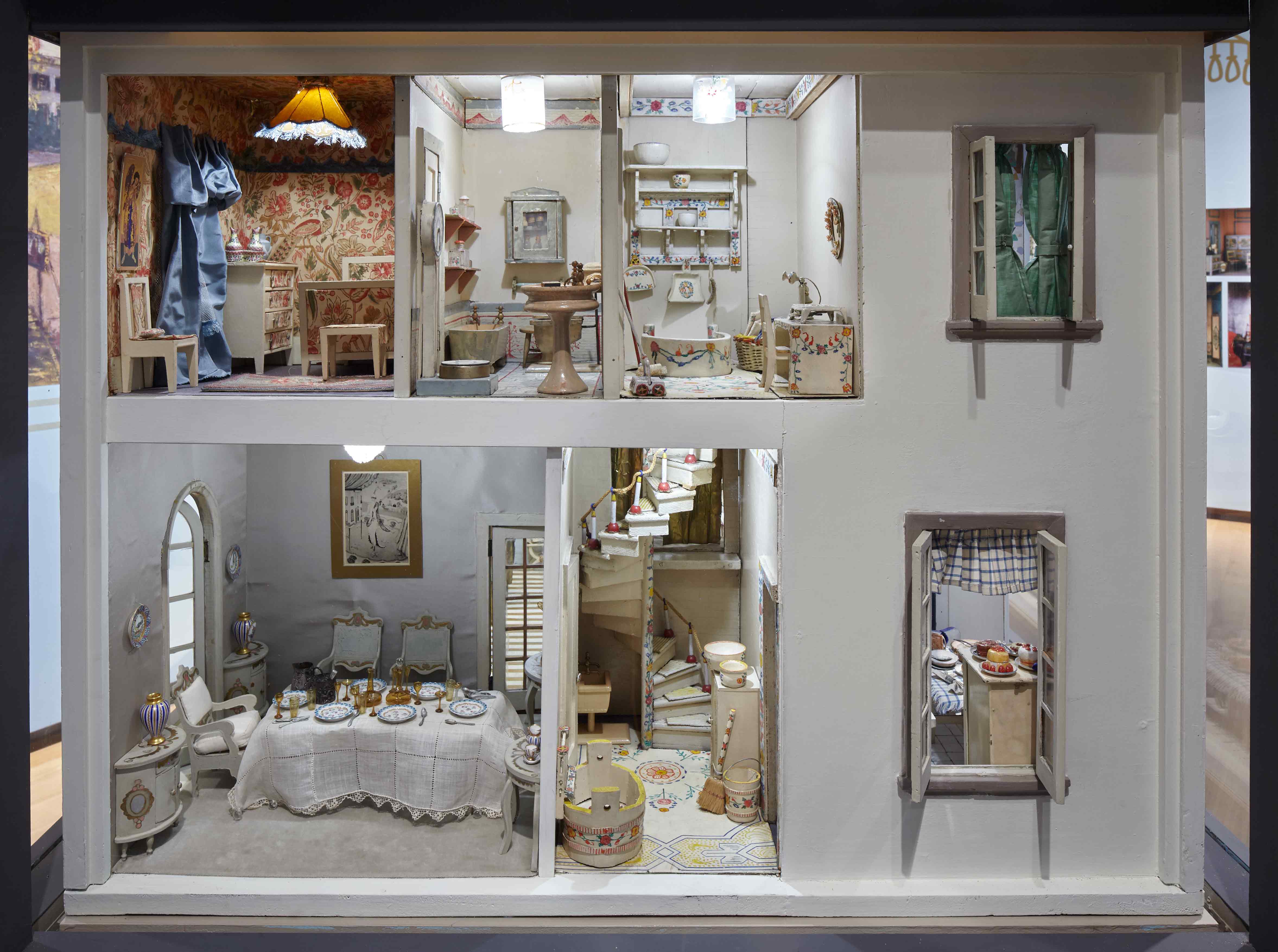 Perhaps today Ettie could be persuaded to temper her grim assessment. The theatrical, set-like qualities of Carrie’s exquisite structure are emphasized by the quiet drama (and consummate lighting) of its current installation, and art-historical developments since the mid-twentieth century encourage more nuanced and generous readings of “women’s work.” The incorporation of craft and decoration—as well as the other traditionally feminine skills of the domestic sphere at which Carrie grudgingly excelled—into radical or reputable artistic practices was then a feminist initiative on the distant horizon. Now, it’s possible to see the dollhouse not (only) as a literalized diminution of its creator’s vision, a “facile substitute,” but as a new form. If, during the Stettheimer sisters’ era, the dollhouse had the confusing, transfixing appearance of something unsettled, between categories, frivolous, and before its time, today it retains all of that magic, but seems rather easy to understand as Art.