In Sarah Polley’s adaptation of Miriam Toews’s novel, a group of Mennonite women gather to reckon with trauma and transgression. 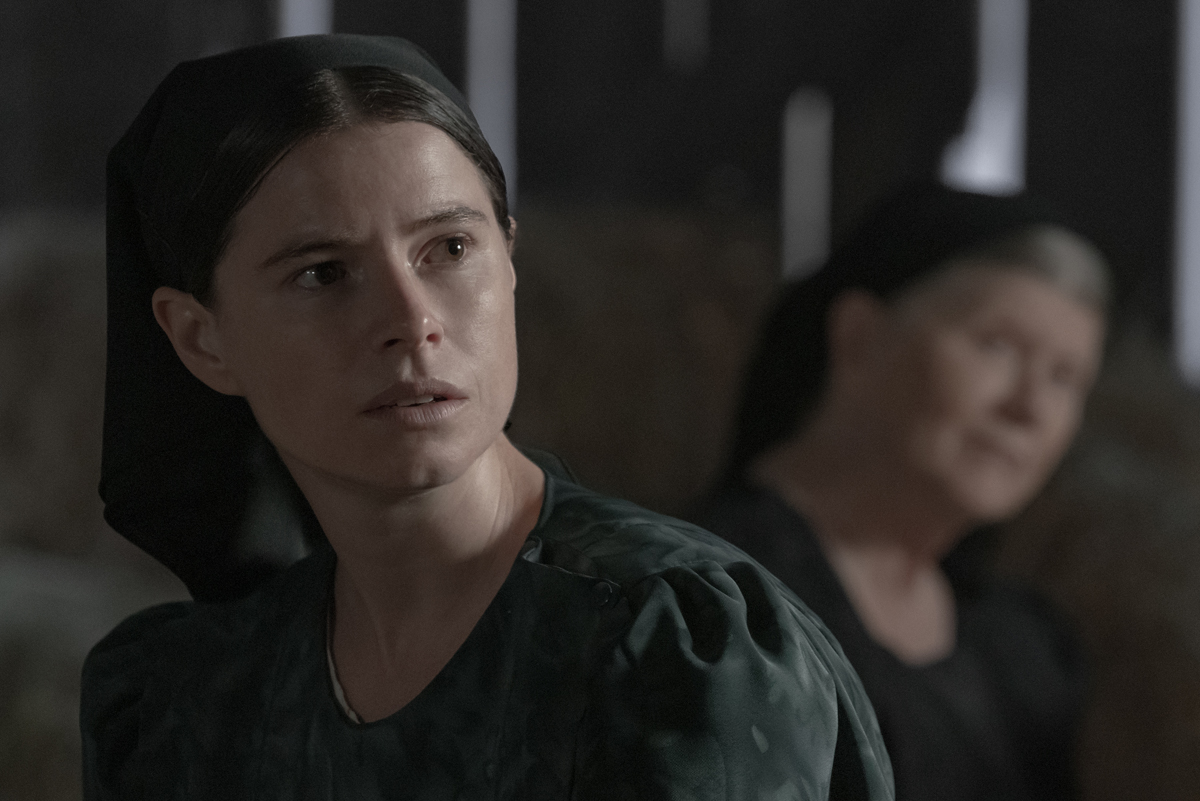 Color has been bled from the fields and sky. Dirt roads, leading God knows where, are a pale taupe, as are the weathered wooden buildings of the colony—the remote religious settlement depicted in Women Talking. Sarah Polley has said of her daring, fêted film that she wanted it to feel like a fable. This extreme desaturation of the image does, mostly, work toward that aim, generalizing the epic power of the flat landscape and its beckoning horizon line, untethering it from any specific, earthly place. But the faded look also conveys a kind of collective anhedonia belonging not to any allegorical realm but to the dimmed world of a particular terrorized group. In the colony—a place without electricity or cars, where people abide by Anabaptist rules of modesty and simple dress—every woman is periodically drugged with a livestock anesthetic and raped in her bed, waking groggily to bruises and bloody sheets.

Polley’s screenplay is an adaptation of the 2018 bestselling novel of the same name by Canadian author Miriam Toews, a book inspired by real events that took place in an ultraconservative Mennonite outpost in Bolivia a little over a decade ago. As Toews, who was raised in the Mennonite church, states in her foreword, the attacks were blamed on ghosts or demons, deemed to be God’s punishment for sins, or “the result of wild female imagination.” But when two rapists were caught breaking into a home, the ruse fell apart. Eight men—accused of scores of assaults over a period of years, including those on young children—were convicted and sentenced to prison. 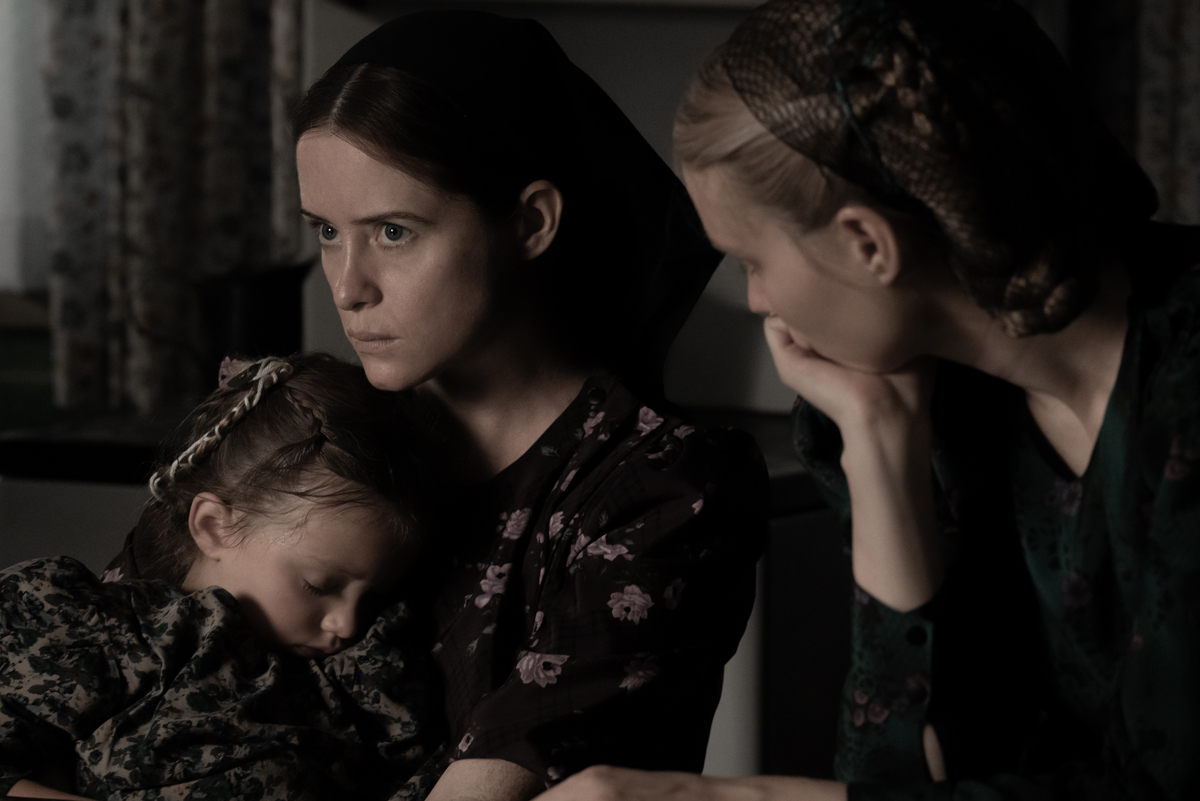 Women Talking’s subject—or rather its starting point—is violence, a dark criminal conspiracy, but it’s the opposite of a true-crime drama. Beginning with the big mystery already solved, it’s driven by a fascination with the women’s thoughts, not the perpetrators’ minds. (The rapists are never seen, and the attacks are represented elliptically, as flashbacks, with brief, blue-cast scenes of women in pain, in the morning light, taking stock of their bodies and the night’s brutality.)

The story unfolds after these men—family, friends, and neighbors—are apprehended and arrested, taken to the nearest town (which seems to be a day away, by horse-drawn buggy). When the other men go to post bail for the detained, the women are issued an ultimatum by the unseen “elders”: they must forgive the rapists when they return, or they—the women—must leave the colony.

Do nothing, stay and fight, or leave are their options as they see it. The women meet in a barn and vote, each marking an X beneath her choice’s respective pictograph. (Only boys are taught to read and write.) When the last two choices are tied, an ad hoc council of three families is tasked with the final decision. One family departs the conference early, led by Scarface Janz (played by Frances McDormand, who is also one of the film’s producers). Steely and resigned, she takes the most tragic, perhaps realist, position in what becomes a far-reaching philosophical and theological debate. She insists there are no true options: the women must forgive the men—do nothing. 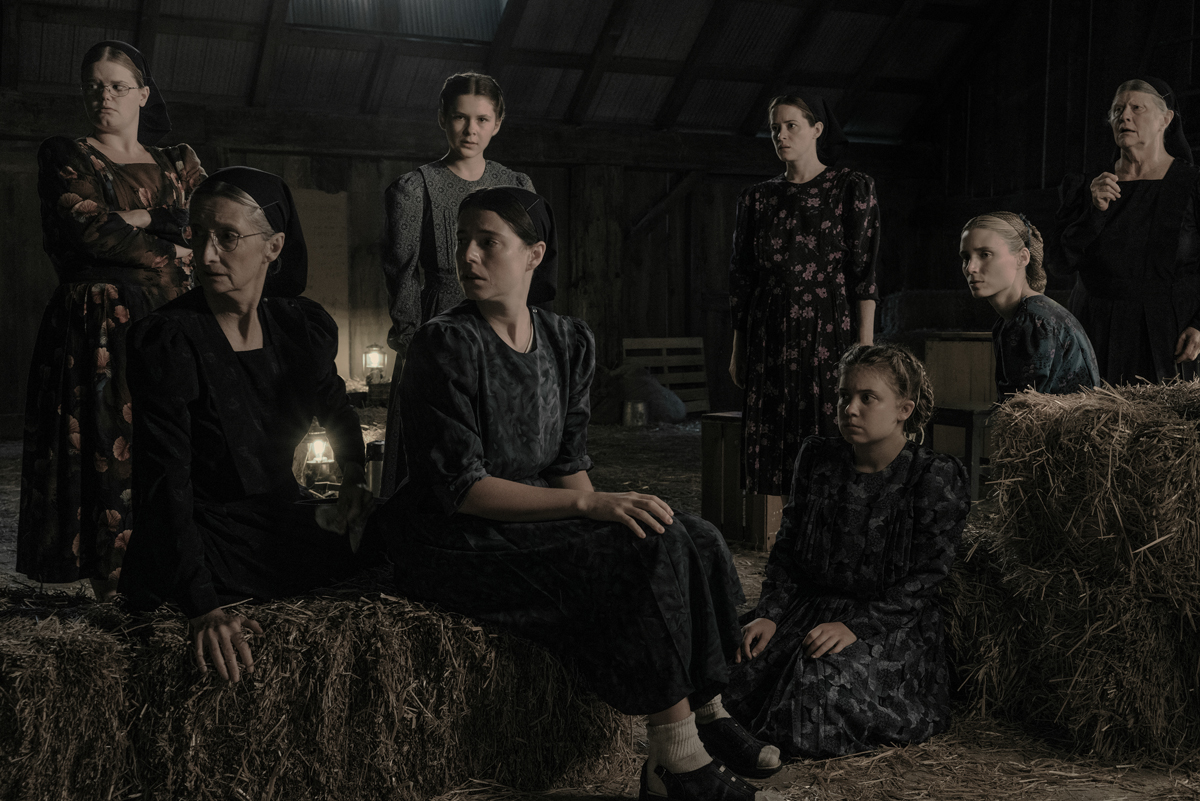 The barn’s hayloft, a cathedral-like hideout with a peaked roof and exposed beams, is the backdrop for the long, multipart meeting, which is attended by the eight remaining women and girls. Minutes are taken by sensitive, sympathetic August (Ben Whishaw), the colony’s schoolteacher. Something of an outcast, he had left the colony for some years, with his dissident, excommunicated mother, and is besotted with the lambent idealist Ona (Rooney Mara). The gaps between the loft’s wood planks are filled with bleached sunlight, but the interior remains mostly dark. Starkly beautiful shots recall underexposed sepia-tone prints. Sometimes more color is allowed in, lending the arguing faces of the women—as they articulate the practical considerations and spiritual stakes of their dilemma—a half-shadowed, Vermeer glow. 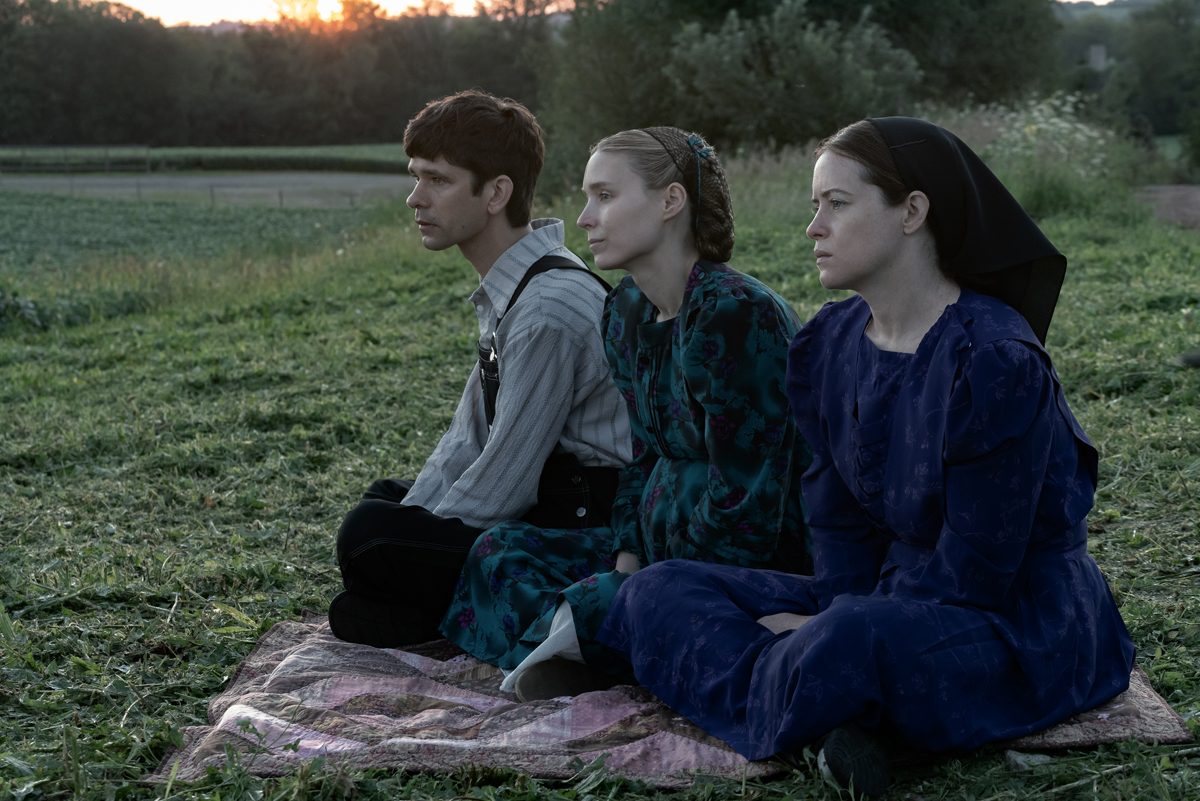 Ona, unwed and pregnant by an attacker, faces the eventuality (if she stays) of the colony seizing her baby and placing it with another family, perhaps in a household with the rapist himself. She is the dreamer, refusing the “solution” of a marriage to August and floating the idea of radical reform in the colony. Her sister, Salome (Claire Foy), whose three-year-old was brutally assaulted, is the voice of retribution. She has already tried to exact revenge, wielding a scythe unsuccessfully against the men before they were taken away. She maintains that she is willing to burn in hell for the chance to shoot each one in the heart. Agata (Judith Ivey), their sage, weary mother, reminds the group of their belief in pacifism; if staying will make them murderers, for the sake of their souls they must leave. 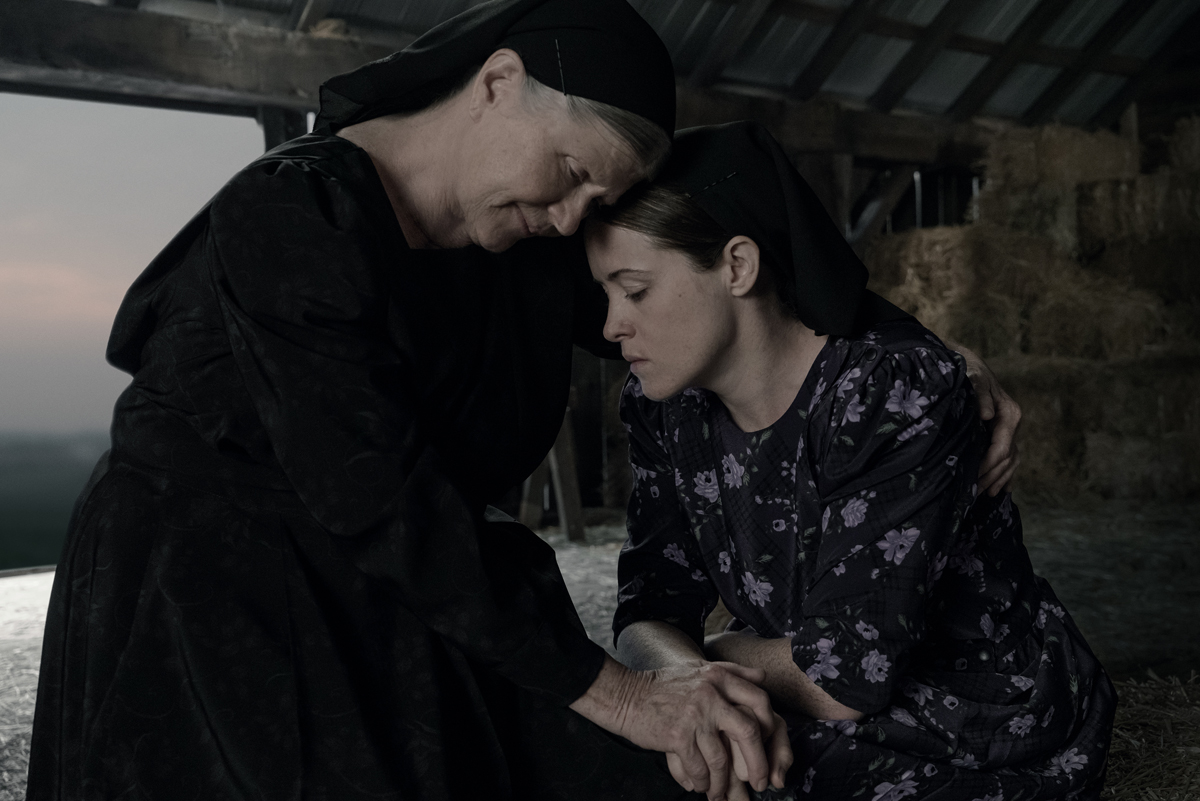 In the other family present for the deliberations, obedience and conformity run deeper. The mercurial, miserable Mariche (Jessie Buckley) has forgiven the violence and cruelty of her husband countless times; to her, the drugged rapes are perhaps just a more outlandish exercise of misogynist caprice. She wants to stay and fight. Her mother, Greta (Sheila McCarthy), who offers anecdotes about her mares Ruth and Cheryl as parables and must wear ill-fitting dentures because her teeth were knocked out when she was assaulted one night, observes that the women have been preyed upon like animals. “Maybe we should respond like animals,” she suggests—they should run away. 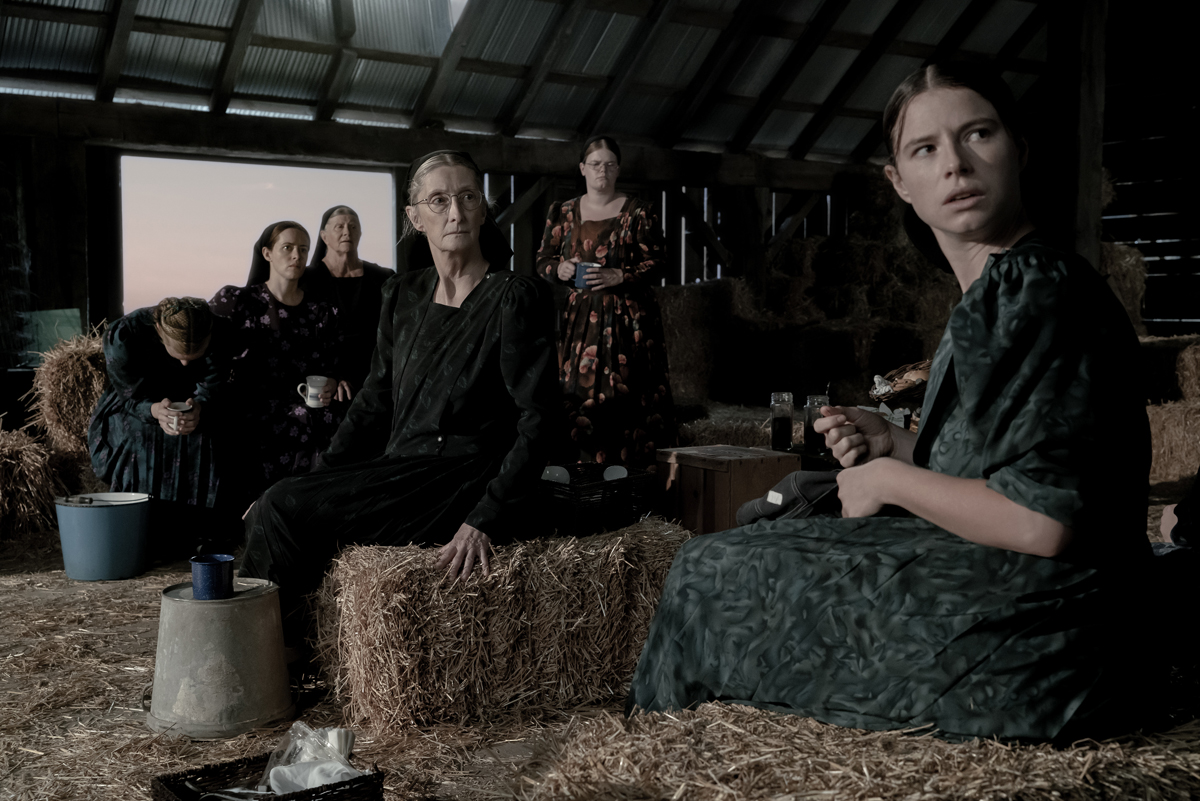 The decision to leave is perhaps a forgone conclusion, but no step is skipped in this sometimes circular, cathartic Socratic debate. The questions—regarding the nature of forgiveness, the possibility of redemption, the capacity to unlearn violence and the habits of patriarchal thought—are huge and complex, manageable in Polley’s adaptation thanks to the shared values, terms, and experiences of a culturally homogeneous, if interpersonally volatile, group. As a feminist thought experiment, the crystallization of various stances in these characters—whose excitingly unnaturalistic performances are emotionally and rhetorically persuasive—basically succeeds. In the film’s studied simplification—its abstracted, apologue-like qualities—there is an implicit understanding that, in reality, things are never so neat.

Women Talking is slightly marred sometimes by its heavy-handed palette changes and verging-on-gray-scale filtered effects; there are also some tonal hiccups in the script. These are commendable missteps, though, since they are born of taking risks—those of representing the traumatized subject as theologian and philosopher, of making a film about rape that does not show the act, or concern itself, ultimately, with familiar themes of healing, revenge, or men. 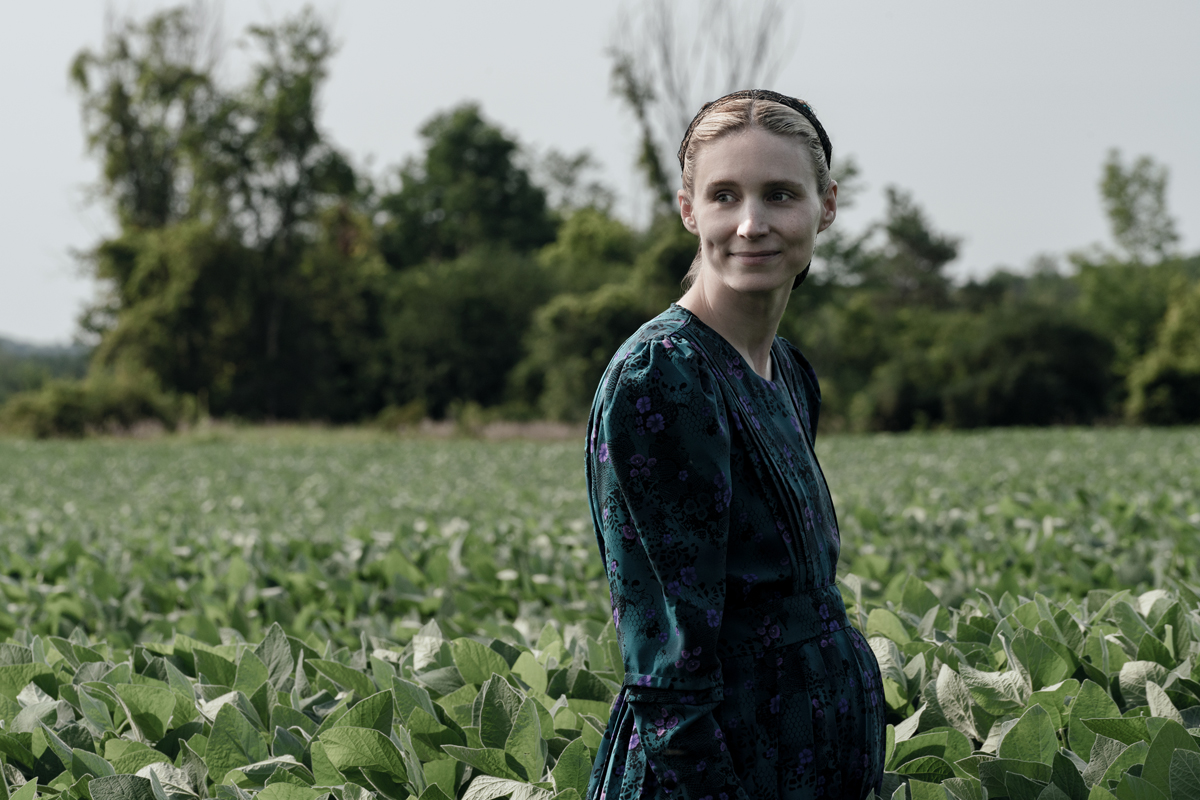 Unlike the book, which adopts August’s perspective, Polley gives her Women Talking a girl’s voice-over as a narrative frame. The young speaker is Mariche’s teenage daughter, presenting the tale to Ona’s child. With her somber introduction and final thoughts, she transforms the events that precipitated the women’s exodus—what might have been the stuff of their mothers’ secret shame—into a tale of their spiritual convictions and heroic escape. It becomes an origin story, the legend of a new community, one founded on an anti-rape faith.

Johanna Fateman is a writer, art critic, and musician. She writes art reviews regularly for the New Yorker and is a contributing editor for Artforum. Her band, Le Tigre, has reunited after seventeen years to tour in 2023.