From the margins to Martha Stewart: the progressive, feminist potential of homemaking. 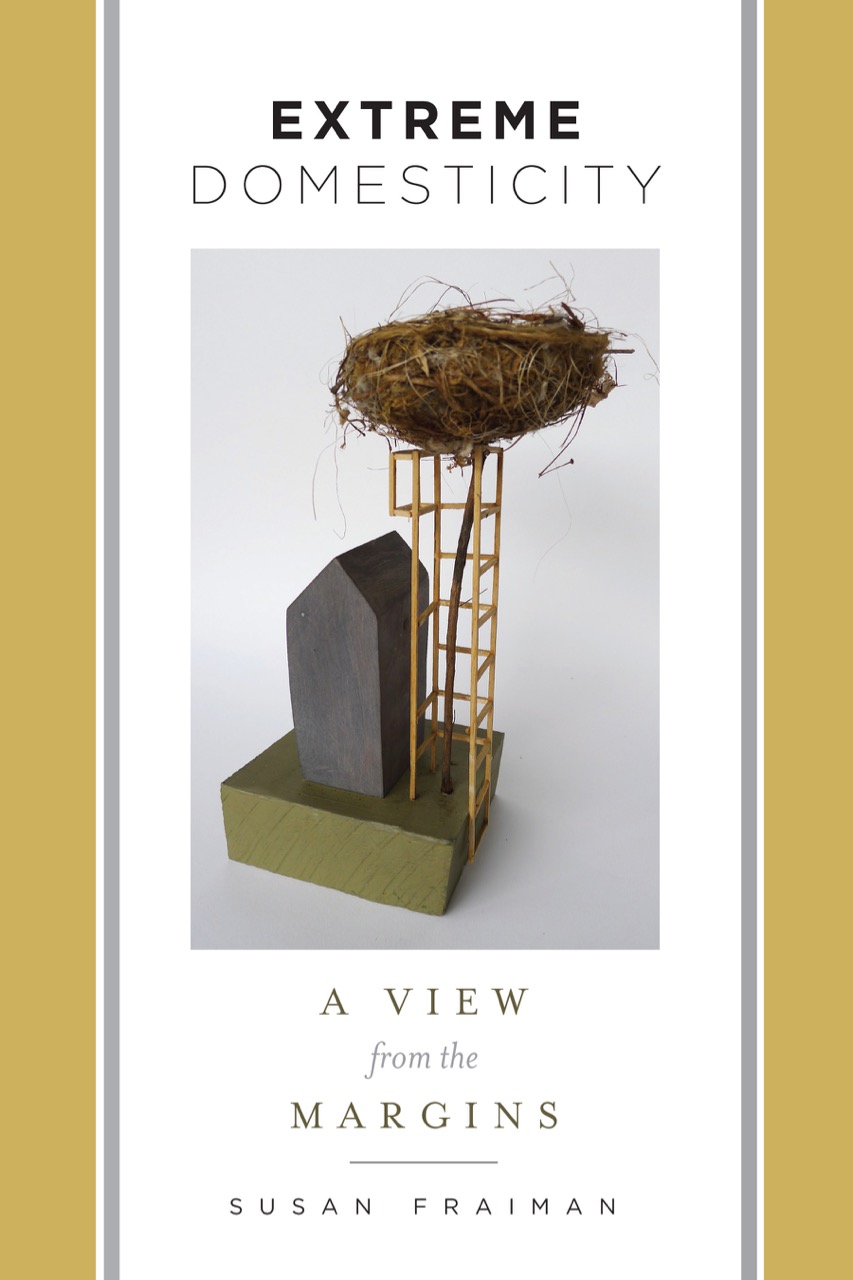 Domesticity is a difficult term to make urgent, powerful, extreme. It’s all the more challenging at a time of unprecedented inhospitality (to put it mildly) toward refugees, immigrants, transgendered children, “nasty” women—to cite a few of the groups targeted in the name of the nationalist, masculinist lifestyle brand that currently occupies the White House. Yet, Susan Fraiman’s book Extreme Domesticity: A View from the Margins amazingly manages a reframing of the term that resonates powerfully in our current moment, as the notions of what counts as home and who is allowed to feel sheltered are at the very heart of today’s social and political woes.

Fraiman unfolds this feminist recovery through approachable and straightforward literary analysis, looking closely at the way homes are described, imagined, and used across a wide range of texts—from nineteenth-century novels to contemporary women’s magazines. To expose the overlooked progressive potential in domesticity, Fraiman must first strip it of its seemingly inherent relationship to conservative gender roles and reactionary politics. Looking to the margins—the people and homes that do not meet idealized, normative standards—she manages, at last, to get domesticity alone. At its simplest, it’s the pursuit of “several meals a day, a place to sleep, a degree of cleanliness and order, and perhaps a touch of beauty” and the virtues of “privacy, safety, stability, coziness, quiet, beauty, intimacy, and routine.” When domesticity is delinked from “conventional, sentimentalized notions of home,” the core principles it represents read like a list of basic human rights. For Fraiman, extreme domesticity describes the unending effort required for those on the margins of gender and political hierarchies to create and sustain better homes and gardens for themselves and their chosen families—“labor that is physical, affective, as well as ideological.” Labor that is nothing short of a daily, tactical, life-sustaining resistance.

Robinson Crusoe serves as the urtext for the genre that Fraiman dubs “shelter writing”: creativity and ingenuity triumph over scarcity as an improbable home is created from literal wreckage. The pattern quickly becomes recognizable across the other texts she explores. Examples include: the butch/transmasculine protagonist of Leslie Feinberg’s Stone Butch Blues who recently escaped from violence and abuse in her hometown and painstakingly and proudly fixes up her first New York City apartment in the measured increments that her modest paycheck allows; the Chicano/a family of Sandra Cisneros’s The House on Mango Street, who find their titular home only after a string of forced moves that, in Fraiman’s telling, echo the territorial dispossession of indigenous Americans during successive Spanish and US conquests of the Southwest; and the testimonies of homeless individuals across a range of books and documentaries who devise ingenious tactics to find moments of privacy and comfort, displaying a “domesticity [that] is not absent . . . so much as it is broken and embattled.” Uniting these examples is the idea that when home, or even shelter, is not guaranteed, the mundane attentions to the details of homemaking become both more poignant and more urgent.

In this way, coziness can be an ideological victory. Paraphrasing Gaston Bachelard’s oft-cited The Poetics of Space: the “sense of house as refuge is only heightened when tested by the elements—by snow, for example, or by storm. When the house is besieged, it becomes, in our imaginations, more intimate, more fiercely protective.” Fraiman extends this understanding of the home under siege to other dangers—domestic violence, economic inequality, the legacy of colonialism, homophobia, even the demands of maternal sacrifice. So when, in Stone Butch Blues, Feinberg spends pages describing the work and the carefully selected objects that transform her protagonist’s low-rent apartment into a home, the text is pointing not merely to an act of redecoration but also “an audacious effort to produce a basic sense of physical and psychic security by someone who has been repeatedly violated, who has never in her life felt truly safe.” Beyond the sturdy roof or the warm fire, the practices and rituals of homemaking and housekeeping are significant sources of refuge themselves.

The banal predictability that makes domesticity such an uninteresting site for imagining resistance by many on the left are, in fact, substantial achievements for those who cannot take security for granted. Fraiman’s discussion of The House on Mango Street provides a particularly illuminating example of this phenomenon. Recalibrating the “old-fashioned” aesthetic and social practices of some first-generation immigrant matriarchs, she observes that the “preservation of old-country cultural identity results not from a passive traditionalism or refusal to assimilate but instead from the active, daily regeneration of this identity, usually by women, through physically demanding and affectively charged rituals of cooking, dress, and housekeeping.” Rather than serving as a stalwart against change, maintaining continuity with the past is an arduous and perpetually refought battle to project a desired future.

Even more unexpected, Fraiman reveals an alternative version of domesticity embedded within two icons most associated with conventional homemaking—the Victorian “Angel of the House” and Martha Stewart. Through close readings of works by Elizabeth Gaskell and Edith Wharton—both canonical nineteenth-century authors associated with the novel of manners—we find that seemingly small daily actions and decisions of interior design can, in fact, negotiate and subvert the expectations of bourgeois femininity. It is telling, but often overlooked, that Wharton’s first book, The Decoration of Houses, was a primer on interior design for the middle-class home that rejected the stuffy showiness of Victorian aesthetics and instead advocated design based on the use and enjoyment of the home by its inhabitants—chiefly the women dedicated to its care. Fraiman reads the rhapsodic chapter on doors, for instance, as a manifesto of the value of privacy within the home—an interior privacy that enabled Wharton herself the quiet space of reflection needed to begin and sustain a successful writing career. In the contemporary sphere, Fraiman highlights the counterintuitive role of Stewart’s divorce in the creation of her successful homemaker mythos: “Martha’s appeal . . . is actually helped rather than hurt by her status as a divorcee.” Stewart’s exhaustive and craft-laden approach to the domain of the home, as well as her emphasis on entertaining, serve to both elevate the “artisanal work, physical and aesthetic, performed by all women who keep house” and place it “at odds with the ideals of marriage and maternity.”

Fraiman’s nuanced readings reveal that domesticity can be, and has been, “reconfigured as a language of female self-sufficiency, ambition, and pleasure.” Delinking domesticity from its normative assumptions, we can finally see within it the complex and multifaceted labors of resistance to the very feminine ideals that have placed the notion of home beyond reach for some, while forcing sacrifice and service for others. We can give domesticity the proper, feminist home it deserves.

Andrea Fontenot is Faculty of Critical Studies at California Institute of the Arts and teaches courses on queer visual cultures, feminism and popular culture, and critical writing. Her work has appeared in Camera Obscura, Modern Fiction Studies, Artbound, and Artillery Magazine.