The ghost of experiences past: an LA artist digs into themes of race and lived history with techniques of erasure and defamiliarization. 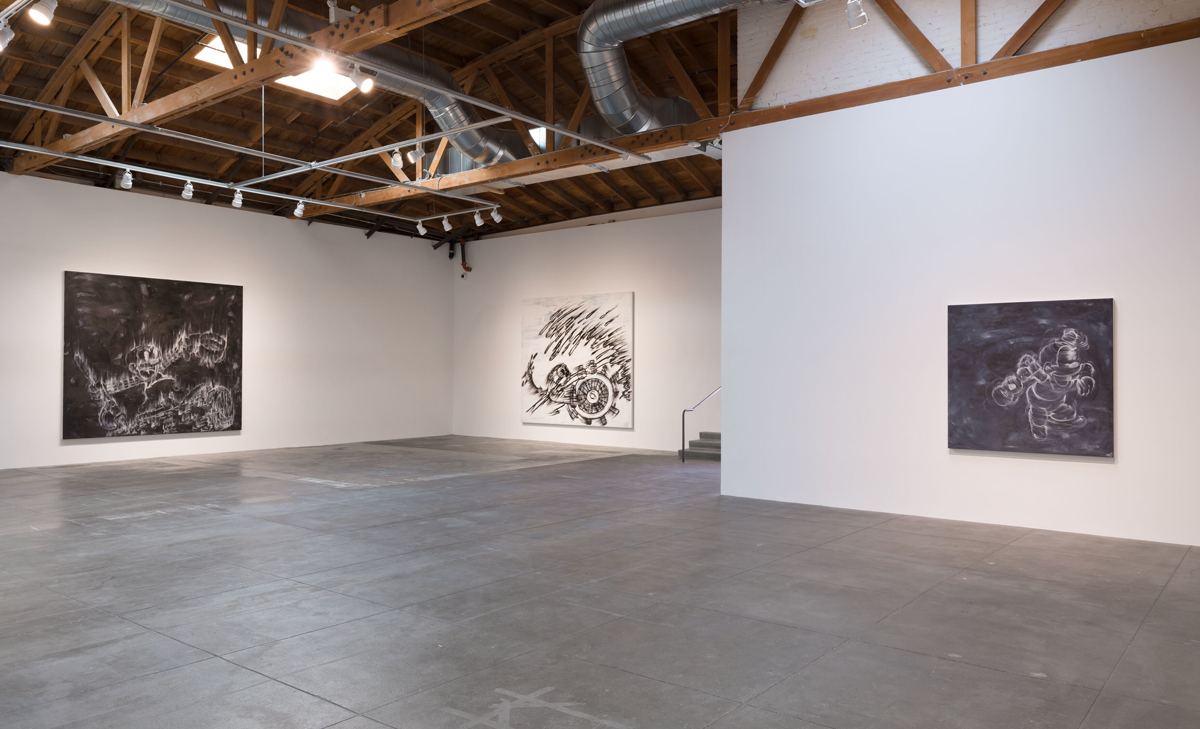 It’s all too tempting when visiting Gary Simmons’s Remembering Tomorrow, a new presentation of painting, wall drawing, and sculpture at Hauser & Wirth, to think first about a broader context. After all, the artist’s debut with the gallery—at its hub in his hometown of Los Angeles—engages, with incredible clarity, themes and iconographies that go back in his practice to the 1990s. This prompts ruminations about how the surrounding culture has, and hasn’t, evolved over the years, at the same time that the exhibition offers a critical staging ground for Simmons’s major career survey at the Museum of Contemporary Art Chicago next year. Yet, for me, visiting the show with my middle-schooler, most compelling was a specific—and perfect—question posed to him by a friendly attendant as we approached one of the artist’s sculptural installations: “What do you see?”

The answers came quickly. Titled You Can Paint Over Me But I’ll Still Be Here (2021), the work features five blue tables with hard seating that’s immediately recognizable from school cafeterias. A scattering of cartoonish figures set on these furnishings are as familiar, and both attendant and preteen swiftly agreed on a number of personality types at hand. There is the grandstanding class clown, for example, in addition to the social clique huddled among themselves; and then there is, high in the gallery’s rafters, the watchful introvert, looking down upon this hectic scene. Their shared intuitive understanding of such lunchroom dynamics emphasizes just how much institutionalized settings are formative sites of collective memories and learned behaviors that shape our subjectivities. 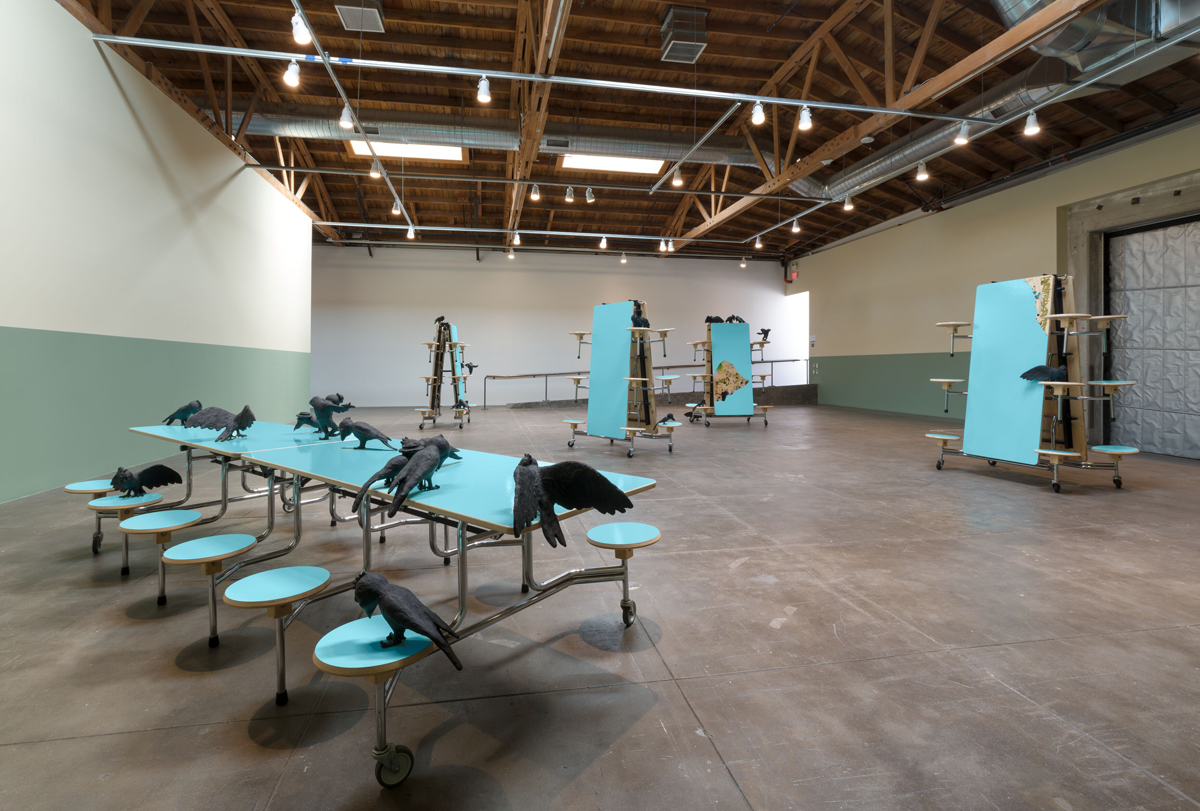 Yet, on this point, as crucial as any question of what you see is another of what you don’t. As Douglas Crimp famously argued in On the Museum’s Ruins, “what any of us sees depends on our individual histories”—an observation especially resonant when one learns that Simmons’s figures here are modeled on crows appearing in Disney movies, most famously Dumbo (1941). When speaking recently of his use of Dumbo in various projects over the years, Simmons noted how, in his informal canvassing, people’s memory of the film often fell “along racial lines.” Black friends remembered well their discomfort with the crows, while white friends often barely recalled their presence in the story. If our learned behaviors are necessarily contingent on the implicit assumptions making them possible, passed along from generation to generation, the artist underscores how the racial stereotyping embodied by these figures can persist, and be overlooked (willingly and not), even when they stand in plain sight. 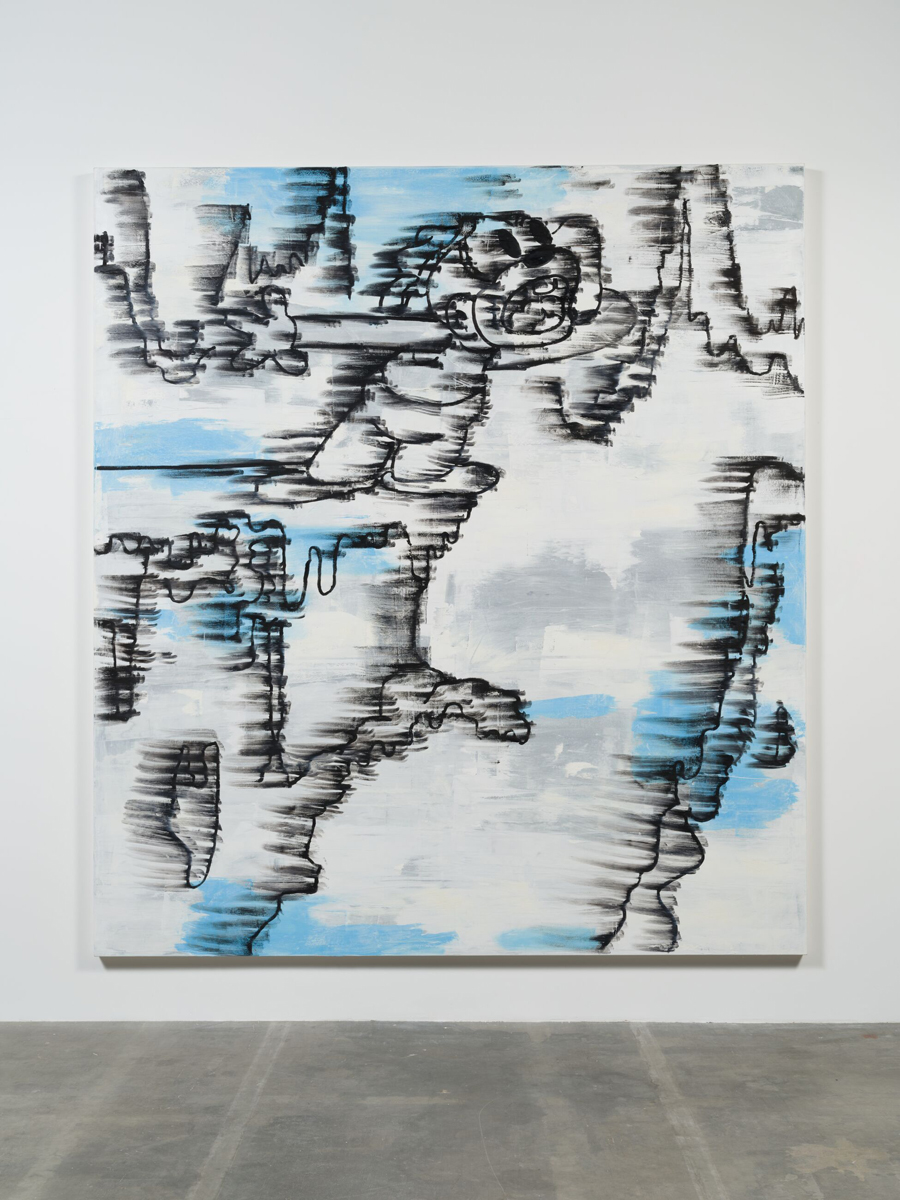 Throughout his decades-long career, Simmons has frequently appropriated such animated imagery precisely because it passes unnoticed so frequently, its soft-power ideologies delivered in apparently innocuous form and guise. The artist does so again in this installation, where a number of large canvases feature Honey and Bosko, two cartoon characters from the 1930s, famous in their day, variously playing guitar, clarinet, or saxophone, and singing in the tub or from the mountaintops. In each instance, Simmons employs what has become the artist’s signature process, delineating the contours of the cartoon image before dragging his hands or arms across the still-wet rendering, which blurs and obscures the picture while making it ambiguous and ethereal: a “ghost,” as he puts it, speaking to how such forms endure even when unseen, effectively haunting our cultural space. 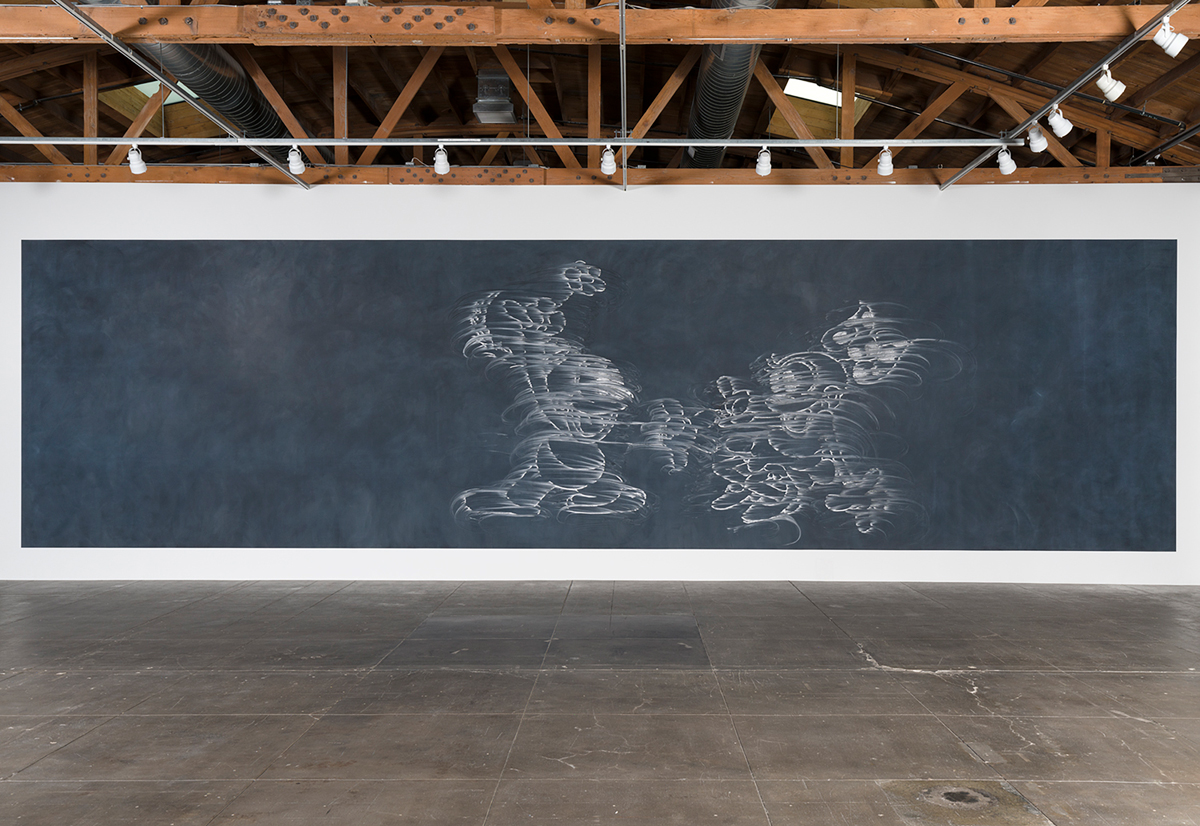 Numerous critics over the years have rightly pointed to the theoretical force of Simmons’s practice, discussing his technique in terms of Derrida’s working “under erasure.” Where Derrida would cross out a word in his text while leaving it in publication to signify that the word was insufficient but necessary, Simmons continually breaks down and builds up the image, which never disappears; its trace hovers there instead. Such erasure renders the familiar newly unfamiliar, and unstable, allowing it to become an object for critique. As pertinent, given Simmons’s chosen terminology, is Crimp’s famous citation of Henry James—“The presence before him was a presence.” The art historian (with whom Simmons once studied) referenced this passage to explicate the holographic, almost ghostly quality of performance works by Jack Goldstein and Robert Longo, which was, he said, rooted in the increasingly tenuous experience of the world after the mass proliferation of photography and, perhaps more important, in people’s capacity to fill in that absence by bringing their own preconceptions to it. So it is that Simmons, taking Crimp’s language into the discourse of identity, might make something in the world newly visible with his “ghosts,” but only while bringing a similar attention to bear on something in us. 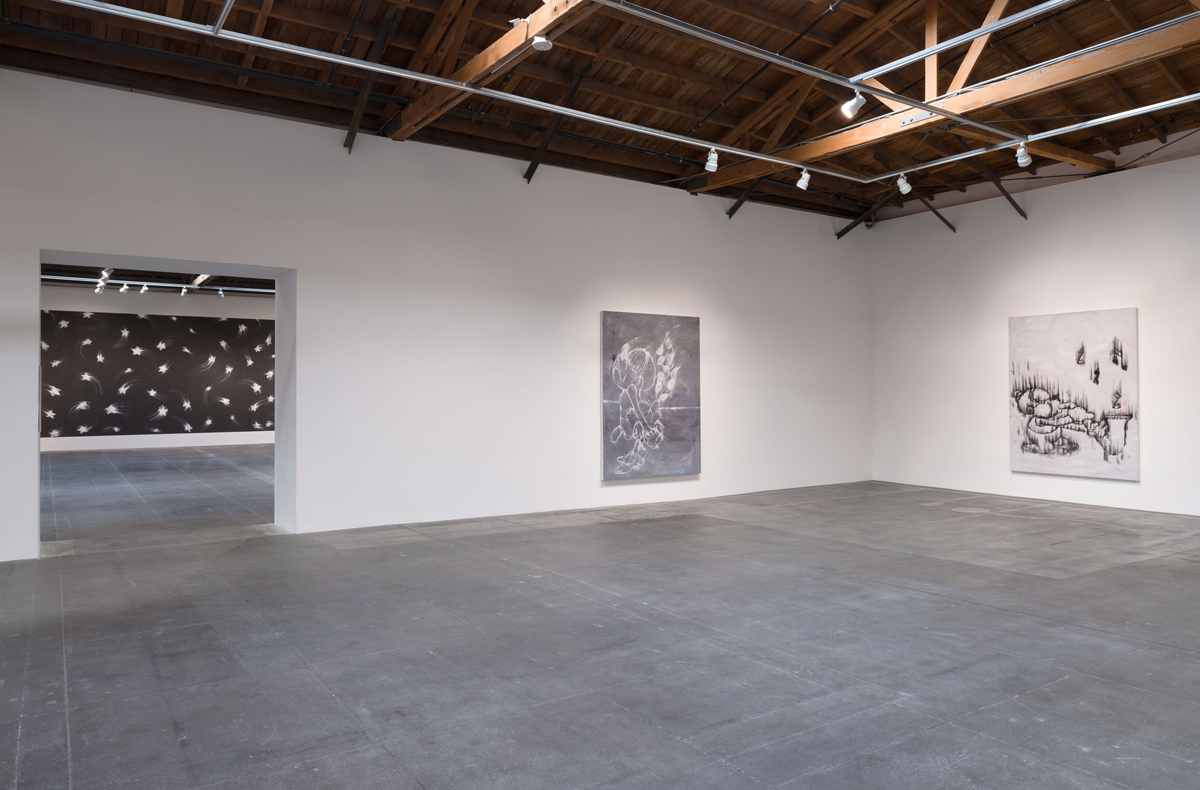 Put another way, contemporary pictures became phantasmatic in no small part due to the viewer’s own power of projection—something suggested here by Simmons’s massive wall drawings, whose grounds resemble chalkboard surfaces but whose incredible scale is the stuff of cinema. (The subjects range from a fleetingly romantic image of shooting stars to the unbearable caricature of a lynched cartoon frog, while Honey and Bosko do the Lindy Hop on a nearby wall.) What one sees depends, indeed, on one’s history, and looking back at Simmons’s touchstone works it is impossible not to recognize the pivotal role for projection in such earlier pieces as, say, Lineup (1993) or Step Inside the Arena (The Essentialist Trap) (1994) (not on view here). If the latter piece’s chalky footprints across the boxing ring invite conjectures about who might have been moving within the squared circle, they also summon Warhol’s dance diagrams. And at Hauser & Wirth, looking at the Rorschach-like Joy Ride (2021), I couldn’t help but recall the Pop artist’s self-effacing reflection that he wished he could ask another person to take his Rorschach test for him, because “Somebody else could see a lot more.” 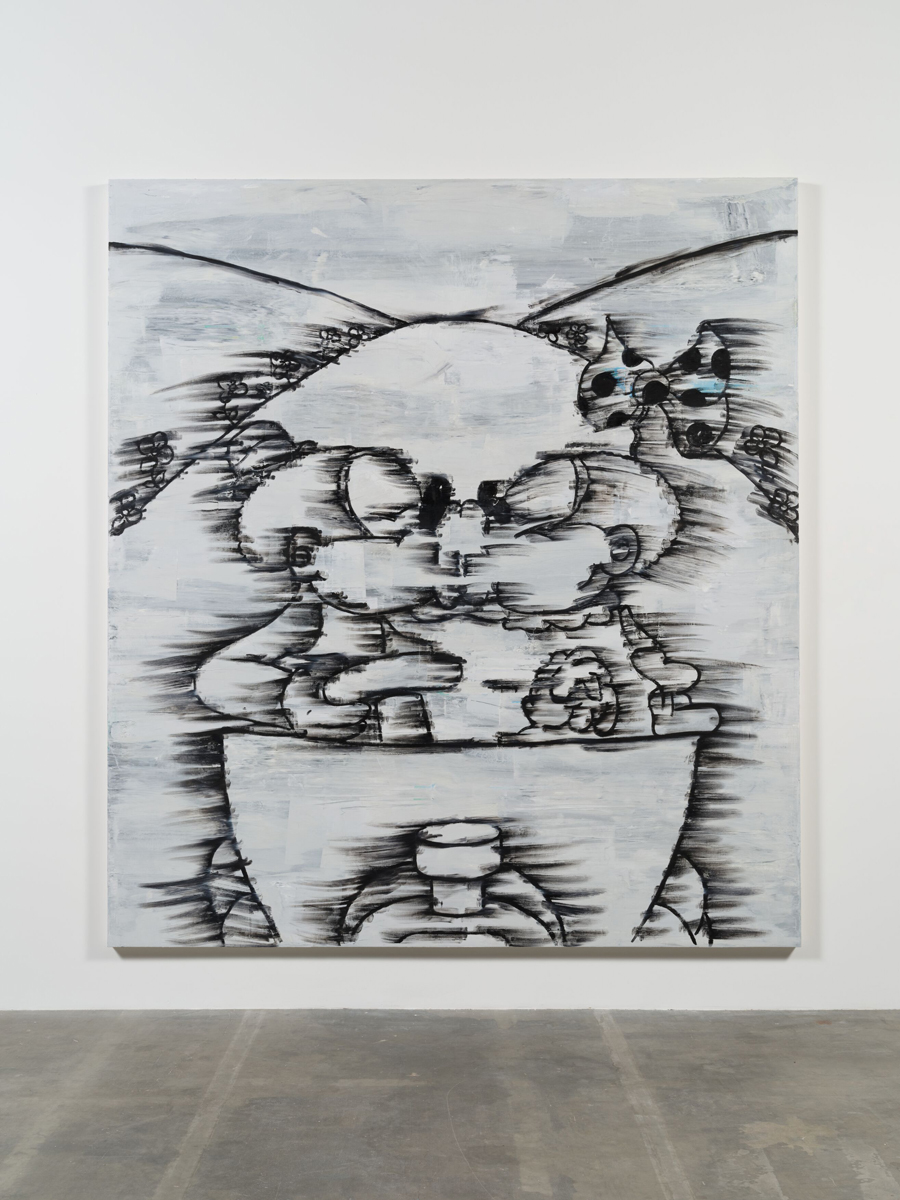 Still another valence opens as one considers Simmons’s process and, further, his suggested relationship with both history and time. His exhibition’s title, Remembering Tomorrow, could certainly be understood in terms of our recollecting other futures, in an unrealized, utopian sense. (Along these lines, the phrasing immediately brings to mind Okwui Enwezor’s Venice Biennale, All the World’s Futures, and, more recently, Prospect New Orleans’s Yesterday We Said Tomorrow.) But the artist’s approach seems instead to orient viewers to the present, as a threshold when one anticipates a future through an exercise of reorganizing the past. The “presence” here is more akin to the “presencing” of ideas as articulated by Homi K. Bhabha: of making ideas material; of bringing them into corporeal space. 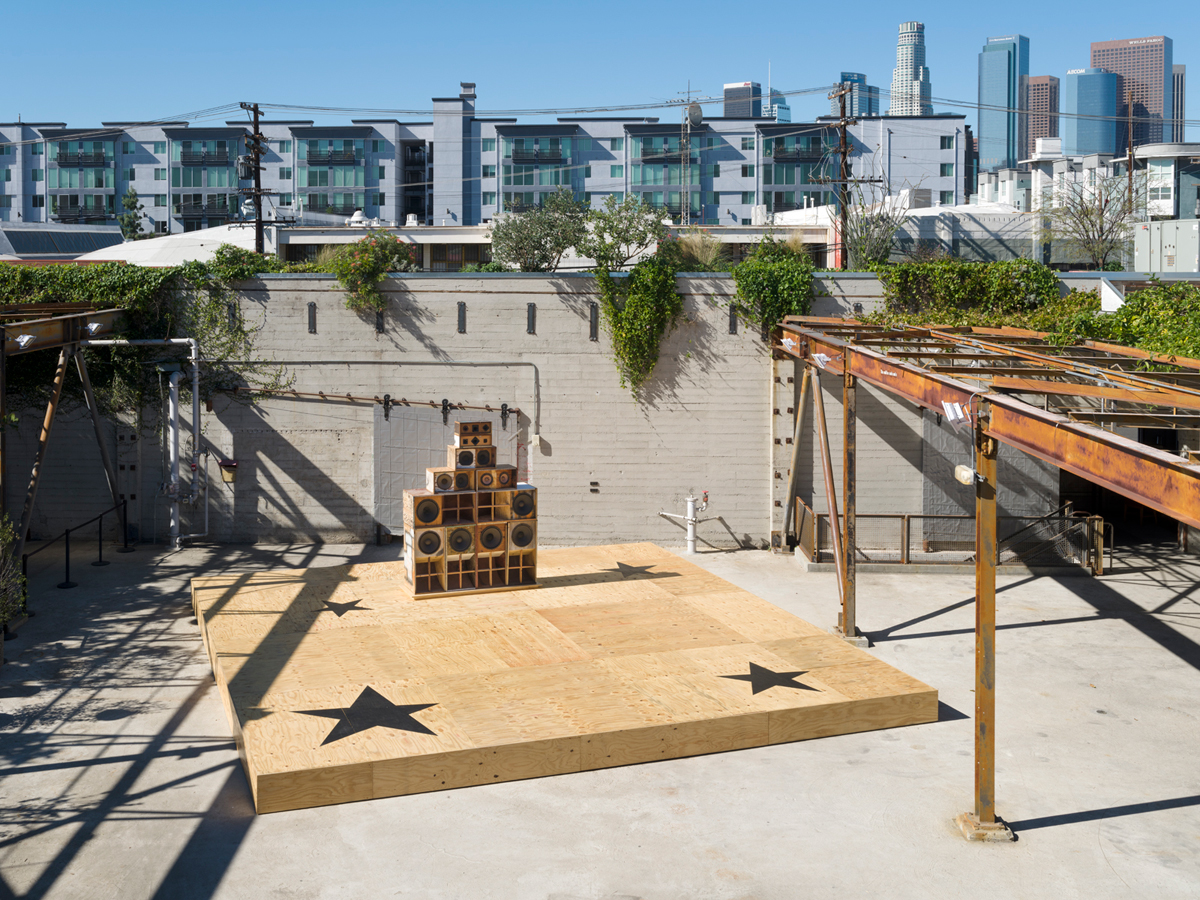 Simmons’s Recapturing Memories of the Black Ark (2014–) suggests as much. A handmade platform and sound system constructed for Prospect.3 using plywood that was still strewn about New Orleans’s Tremé district after Hurricane Katrina, the piece is modeled after Lee “Scratch” Perry’s Jamaican studio. There, according to legend, the producer would do everything from blow smoke on his tapes to spill blood on his consoles to arrive at a rich and true sound. Lived history, in other words, is embedded in materials, which obtain a timbre. And so lived experience accrues to this work, which is reconstructed in different exhibition settings and programmed by people other than Simmons himself—reflecting specific situations, and gathering so many moments. In fact, while the stage’s use is documented in a video—included here on a screen—such history is perhaps best felt in the Ark’s sonic properties, and its changing sound, much as is the case with the materiality of the artist’s erasures. As in You Can Paint Over Me . . . , what you do not see will eventually, and necessarily, inform what you do.

Tim Griffin is a writer and curator living in Los Angeles. His most recent texts for 4Columns have discussed the work of artists Barbara Kruger and Jennie C. Jones.