Once more onto the sand: Denis Villeneuve’s version of the sci-fi classic. 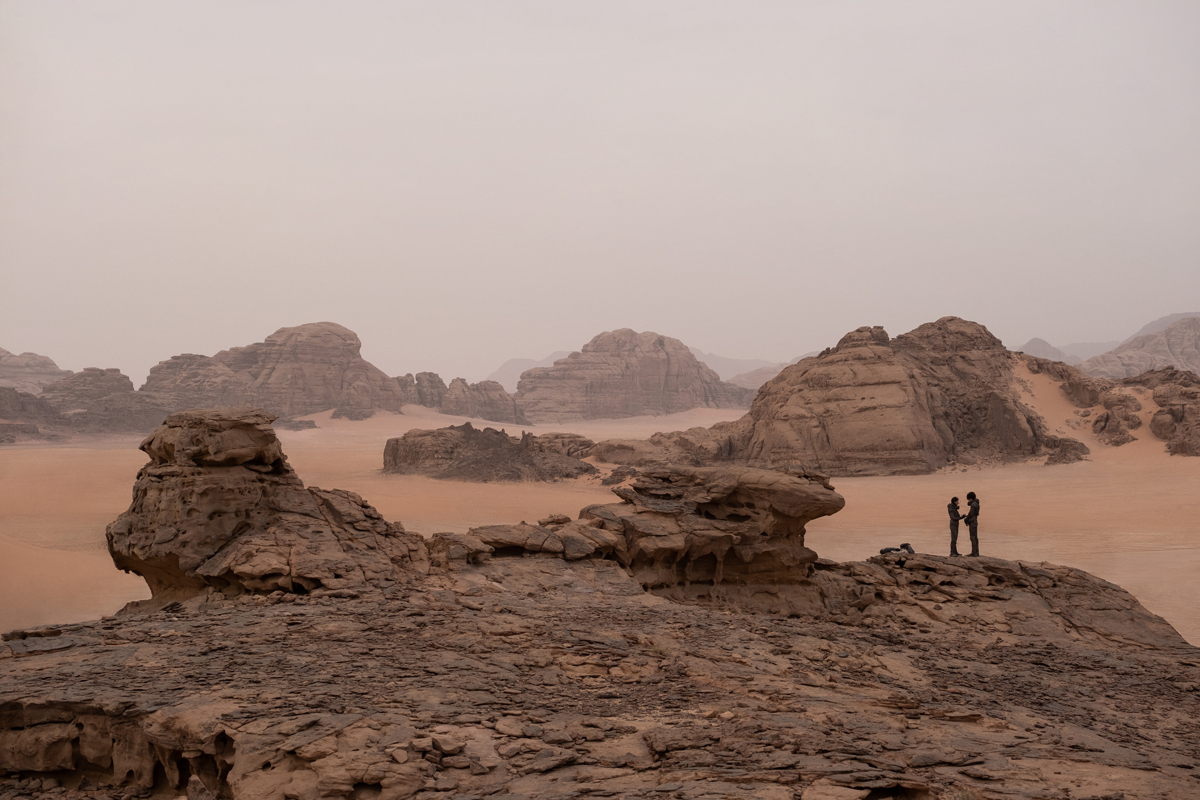 Dune, directed by Denis Villeneuve, now in theaters and on HBO Max

With a hearty Hans Zimmer fanfare, Denis Villeneuve’s Dune has officially arrived on American screens, after a convoluted journey through the shifting sands of pandemic release dates. At once sensorially lavish and narratively restrained, this latest adaptation of science-fiction author Frank Herbert’s beloved 1965 novel offers many fine aspects to slake the thirsts of parched cinephiles, even if what it accomplishes remains largely in the service of setting up the characters and plot points of a proposed second installment. Villeneuve’s advance publicity has long stressed that this is a passion project created by a longtime Dune fan. If so, this would explain why the movie, for all its giddy visuals and vibey glamour, cannot escape a certain DeMille-like, Bible-epic stiffness. Devoted to the ambitious production of overawing grandeur, this Dune never quite coheres into something more profound or compelling than its carefully wrought parts, but does deliver a pageant splendid enough to entertain those of us who are unfamiliar with Herbert’s chapter and verse.

Multiple directors have foundered in their attempts to picturize Dune: Alejandro Jodorowsky’s proposed version would have been a lysergic trip with mad stunt-casting (Salvador Dalí as the Padishah Emperor! Orson Welles as Baron Harkonnen!) but never managed to get off the planet; Ridley Scott remained stuck at the screenplay stage for his Dune project before moving on to helm Blade Runner. David Lynch’s sprawling 1984 widescreener, originally clocking in around three hours, was released in a much shorter cut, rejected soundly by audiences and critics alike, and largely disavowed by its director. While its Eraserhead-meets-Flash Gordon design proves potent, Lynch’s film strains to adapt Herbert’s four-hundred-page novel to a single feature, becoming overladen with characters and bogged down by the verbal exposition of court intrigue. Villeneuve’s Dune, in comparison, avoids this problem by adapting only the first half or so of Herbert’s original story and keeping narrative explanations to a minimum, sometimes to the point of obscurity. (No big loss—after decades of online fandom, all the lore you’ll ever need is only a thumb-flick away.)

Villeneuve’s iteration concerns itself less with the intricacies of Herbert’s deep world-building than with effectively communicating the story’s broadest themes. The galaxy-spanning Imperium’s domination of the desert planet Arrakis, from which it extracts a valuable resource called “spice,” has always been clear enough in its resonances with real empires, and so Villeneuve’s look-book draws liberally from nineteenth-century imperialism, twentieth-century industrial exploitation, and twenty-first-century desert warfare. The film’s palette of racial casting could be taken as an attempt at colonial realism: the uppermost rulers of the Imperium, members of two aristocratic houses, are mostly played by white actors, and their functionaries and native subjects are largely brown and Black. The film opens with Zendaya, as one of the sand-dwelling Fremen of Arrakis, asking “Who will our new oppressors be?”

Herbert’s original text, inspired partly by T. E. Lawrence’s Seven Pillars of Wisdom, derives its motifs from Islamic culture to construct the fictional Fremen and their beliefs, and the film offers lots of well-composed images of unabashed Orientalism to make sure these parallels stick: light streaming through geometric grilles, fortresses rising like ziggurats, long lines of dusty, robe-swathed masses, fragments of swirling calligraphic script. Many of these were already cited as common elements of contemporary science-fiction films in Astria Suparak’s illustrated lecture “Asian Futures Without Asians,” which she’s been presenting since early 2021. Suparak demonstrates, through copious examples, how persistently—and incoherently—Western science-fiction films borrow from superficial aspects of Asian culture, via costuming, architecture, and set design, in order to impart what is imagined to be a sense of the exotic and futuristic. 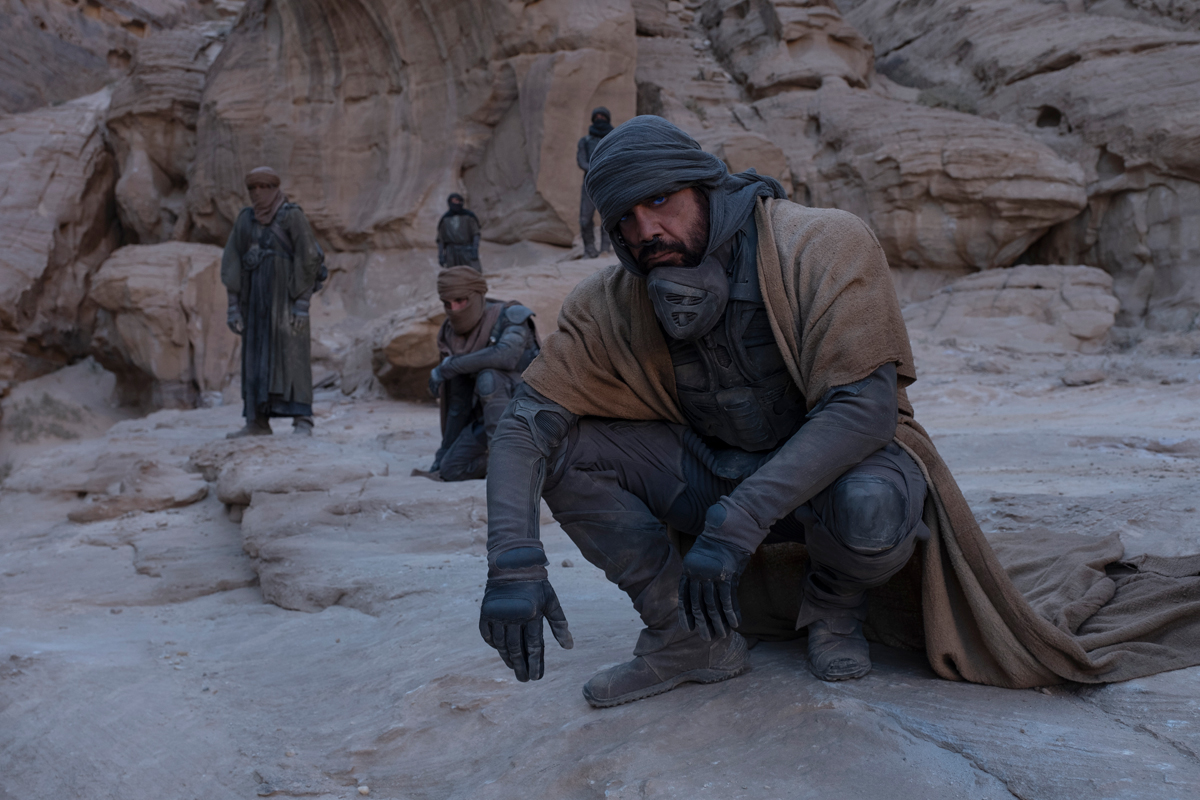 It’s hard not to think about her thesis while watching Dune. Even if its Islamic borrowings might be expected owing to the source material, all kinds of unrelated Asian cultural artifacts are randomly strewn about this Duniverse—bindis, chimes, mandalas, parasols, silken robes, even Mongolian throat singing—intermingled with a cold European medievalism to round out its project of conveying the fantastical through a bewildering collage of familiar tropes. At times these cultural mash-ups are deliriously wacky: there’s a powerfully somber sort of camp at play when Villeneuve throws in a martial bagpiper to lead a procession of the House of Atreides, men in macho metal armor and women delicately jeweled and veiled, as they debark upon their arid satrapy. 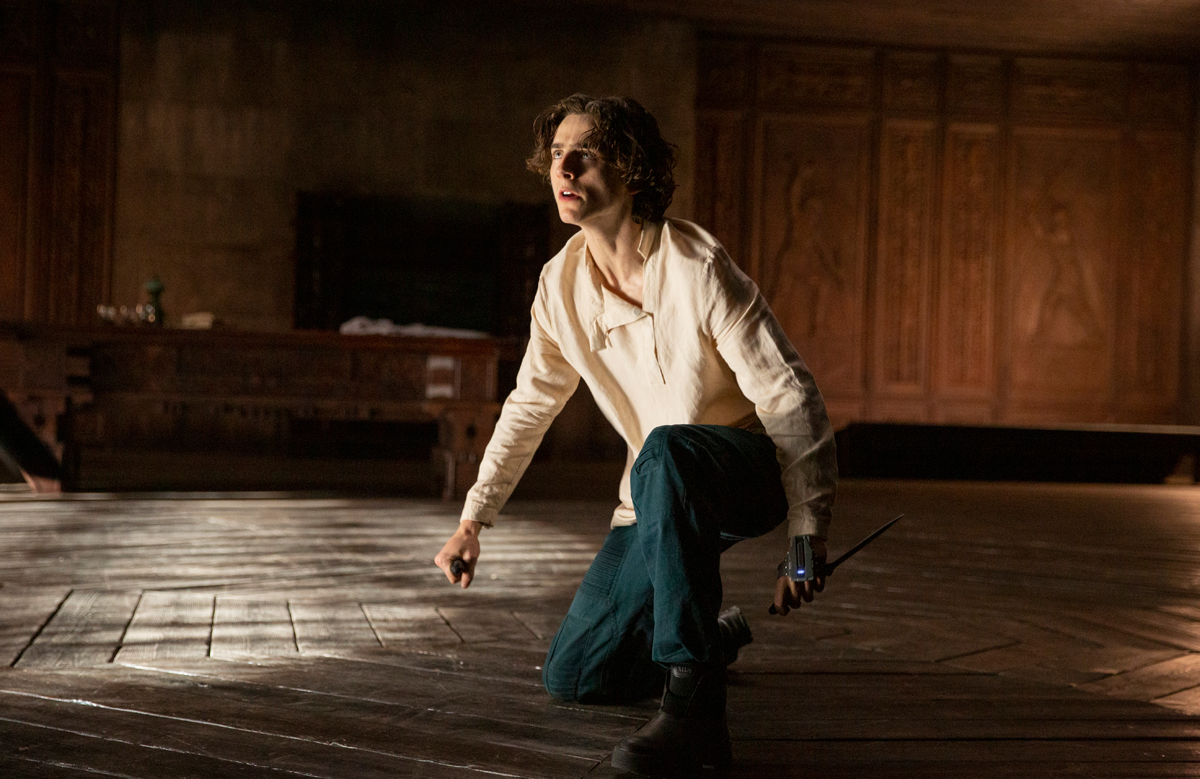 An impressive roster of performers has been assembled for Dune’s collective star power, but they are given little space for any complex acting: not unusual for a space opera. By centering the story on Timothée Chalamet’s wispy Paul Atreides, an Imperial scion with psi powers who may be the messiah of Fremen prophecy, Villeneuve’s film becomes predominantly a coming-of-age tale. In this it most closely echoes Star Wars, clearly a key reference for Villeneuve, so much so that large swaths at times resemble a big-screen Mandalorian. If George Lucas’s film evoked Triumph of the Will, banners and all, then so too must Villeneuve’s. The blue and red energy shields in Villeneuve’s Dune zhoosh like lightsabers; his dragonfly ornithopters whizz through the atmosphere like X-wing starfighters; his holograms are as staticky as analog video.

This queasy sense of déjà vu is heightened, of course, by the fact that Lucas’s film already strip-mined Herbert’s novel for many of its core elements, a fact that savvy viewers noticed when Star Wars came out in 1977. Reviewing the film on its release, critic Reyner Banham, better known for his hip takes on architecture, clocked its source immediately. Noting that the nomadic, hooded denizens of desert planet Tatooine wear “curious loops and lengths of plastic tubing protruding here and there from their garb,” Banham declares that “this was not just a fancy of the costume department. Practically all the audience within our earshot flashed on the fact that this was a reference to Frank Herbert’s Dune ecology, where the desert folk, the Fremen, wear special gear that conserves and recycles all their body water.” Eager to survive his own epic production, Villeneuve likewise opted for a strategy of recycling and reuse.