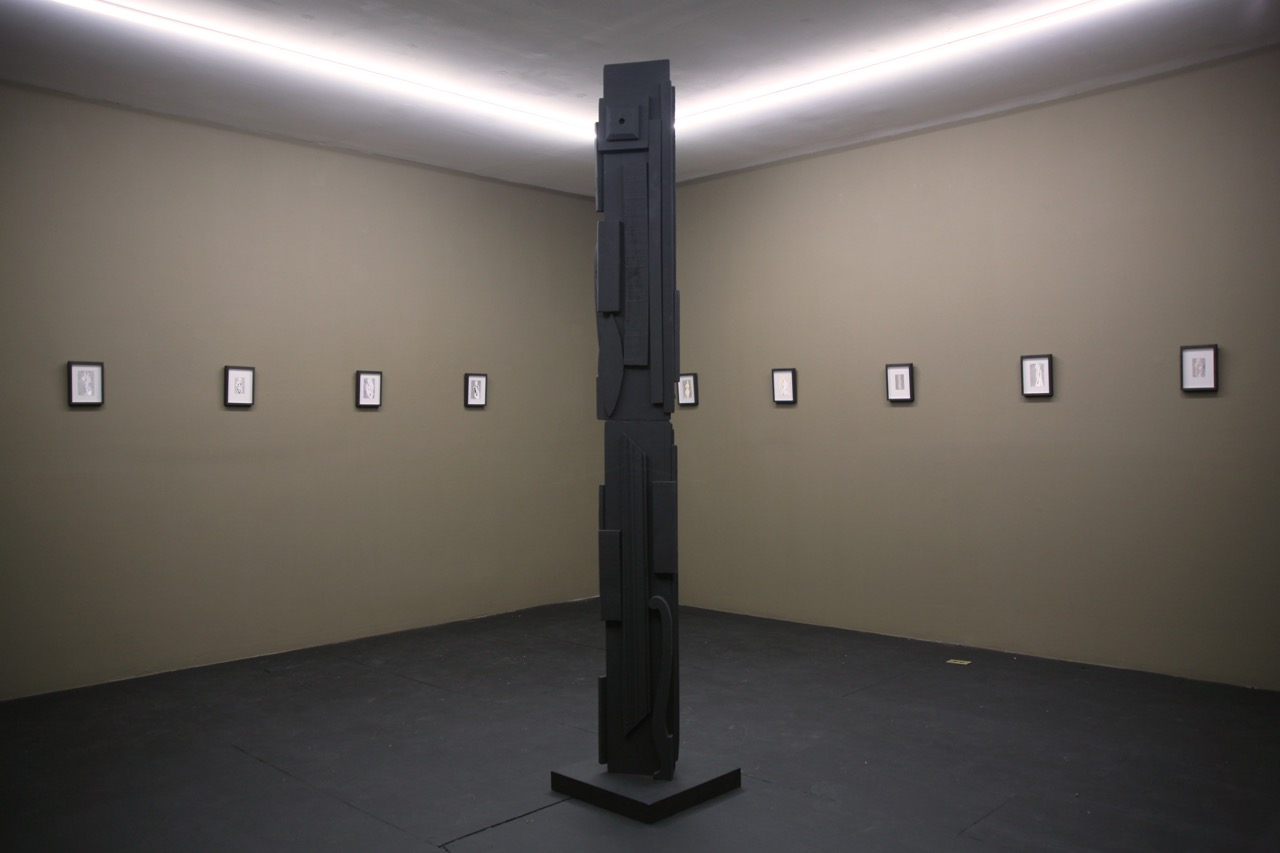 Intersex genderqueer punk multidisciplinary artist Vaginal Davis has done nearly everything. She began her eclectic career in the late 1970s and 1980s as a punk musician, playing in bands like Black Fag, Afro Sisters, and ¡Cholita! the Female Menudo, then reinvented herself as a performance artist, writer, and DJ. For much of the last decade, after moving to Berlin, she has made sculptures and paintings, twenty small examples of which are on display in Chimera, a two-hander with sculptor Louise Nevelson at Invisible-Exports.

Davis’s work has always played on the outrageousness of her persona and reveled in her slippery subject position. Her zany attitude seems like it fell out of an extraterrestrial gay Mexican comedy show about Cesar Chavez. She gleefully sends up leftist politics as much as she celebrates them, starting with her pseudonym, which she adopted in questionable tribute to activist and academic Angela Davis. In one YouTube video, she wears a T-shirt that reads THE REVOLUTION IS MY BOYFRIEND and explains, in her high-pitched voice, her commitment to anti-consumerism. Loopiness aside, her influence has gradually gained in stature alongside the queer issues and gender politics that she nudges so deftly. You can see some of Davis’s tricky antics filtering through the work of many younger queer artists, among them Ryan Trecartin and Kalup Linzy, whose pieces delight in depicting genderfuck on the verge of a nervous breakdown. 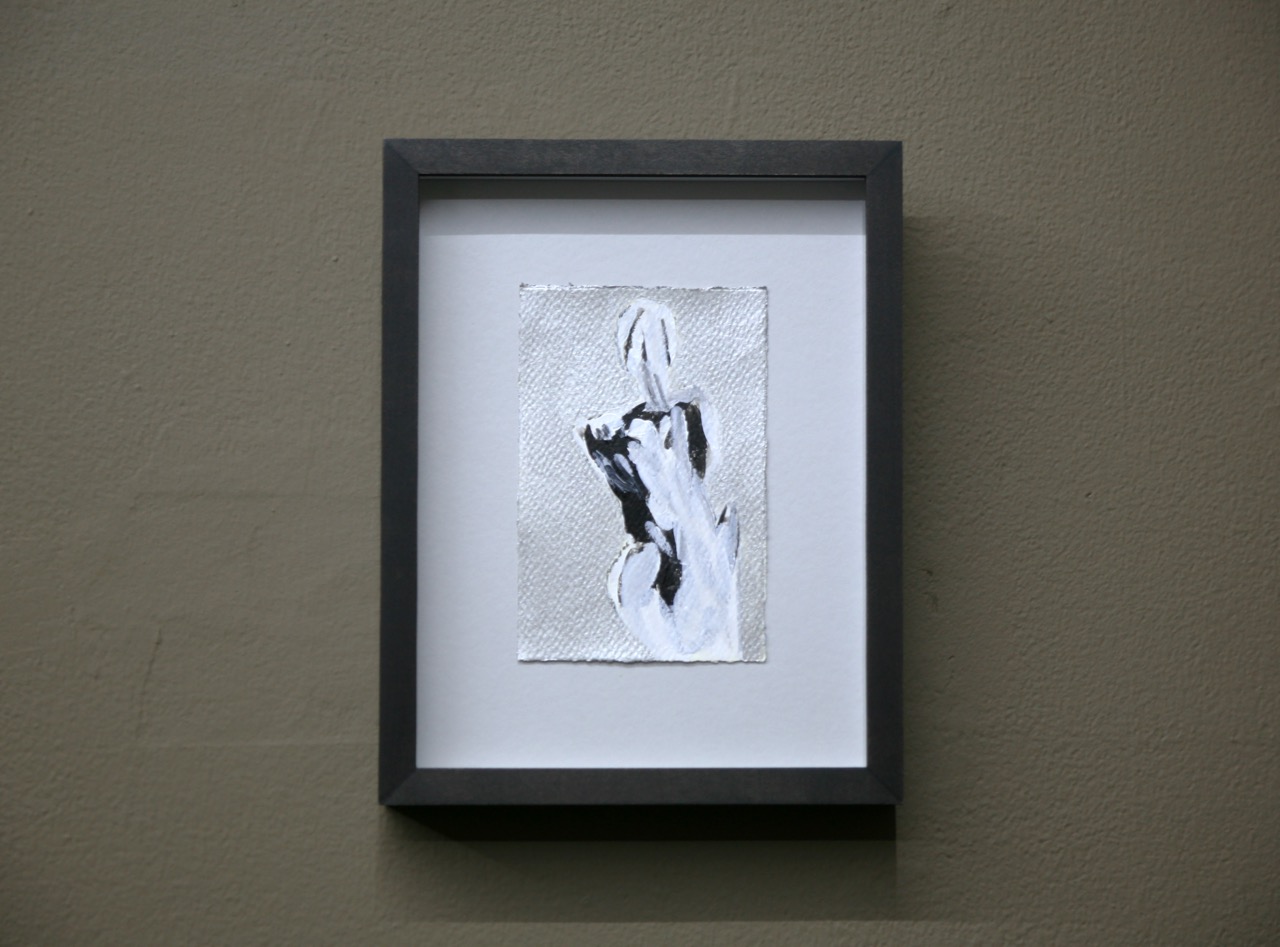 After such sustained flamboyance, it can be difficult to know how seriously Davis means for you to take her. The paintings in Chimera, most approximately three by five inches, each in an identical brown frame installed on a mud-brown wall, equidistant from one another, might seem, at first look, to be the soberest, quietest work she has ever made—if it weren’t for the materials, their genesis, and the artifice behind the installation and its creator. 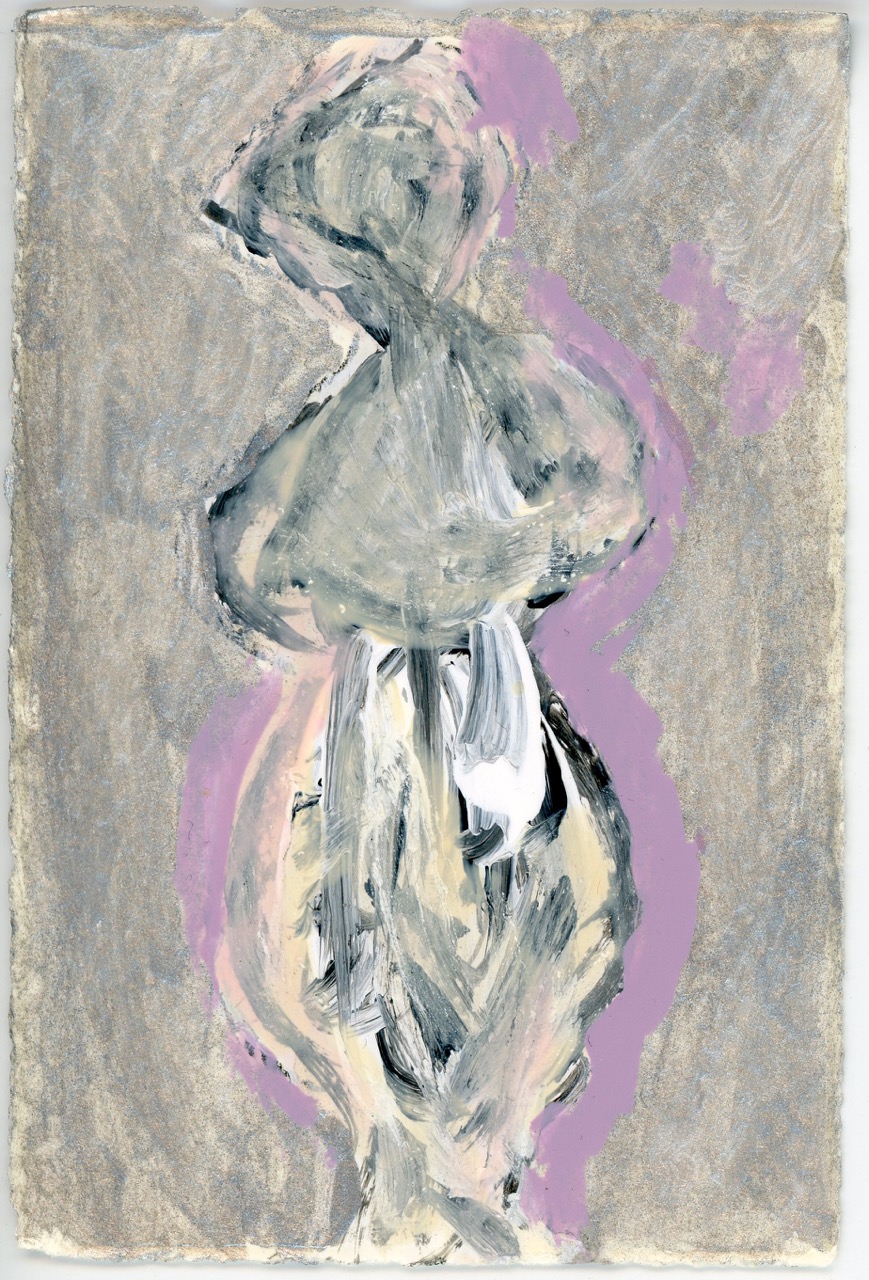 Each of the paintings depicts an abstracted figure of a relatively well-known female actor, often a person of color, as both the titles and a sheaf of photocopied biographies in the lobby tell us. These iconic women include Pearl Bailey, Diahann Carroll, Ruby Dee, Della Reese, Kitten Natividad, and Dorothy Dandridge. They reflect a complicated process of simultaneous reverence, erasure, and myth-making on Davis’s part. 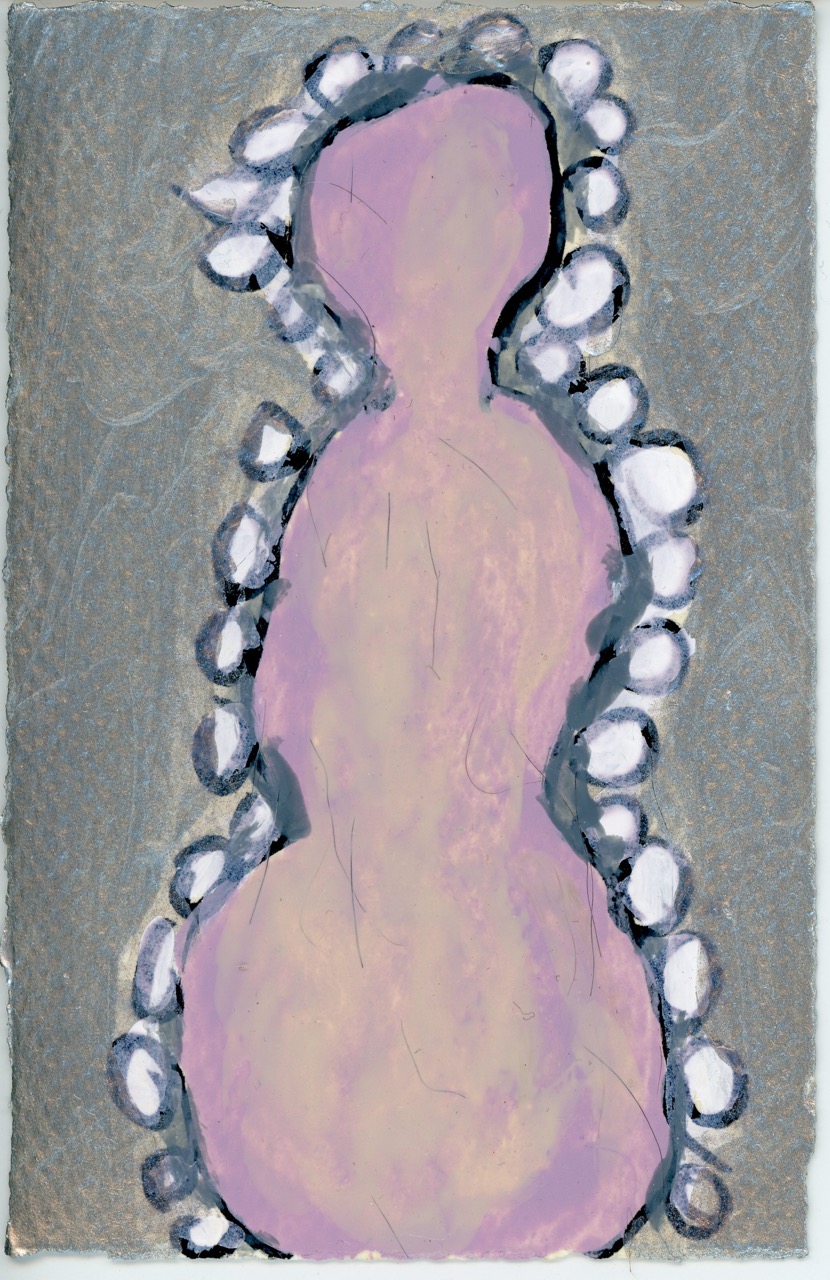 The hourglass figures in the frames look as if Davis might have painted over photographs of these cinematic icons, but photographs are not included in the materials lists. And quite the materials lists they are! Davis has painted her constructions on watercolor paper with nail varnish, pomade, glycerin, hair spray, mascara, eyebrow pencil, Jean Naté perfume, and Afro Sheen hair conditioner. I’ll admit that I tried to smell them through their frames, and sadly could not even get a faint whiff of Aqua Net. But what fragrances they must have! 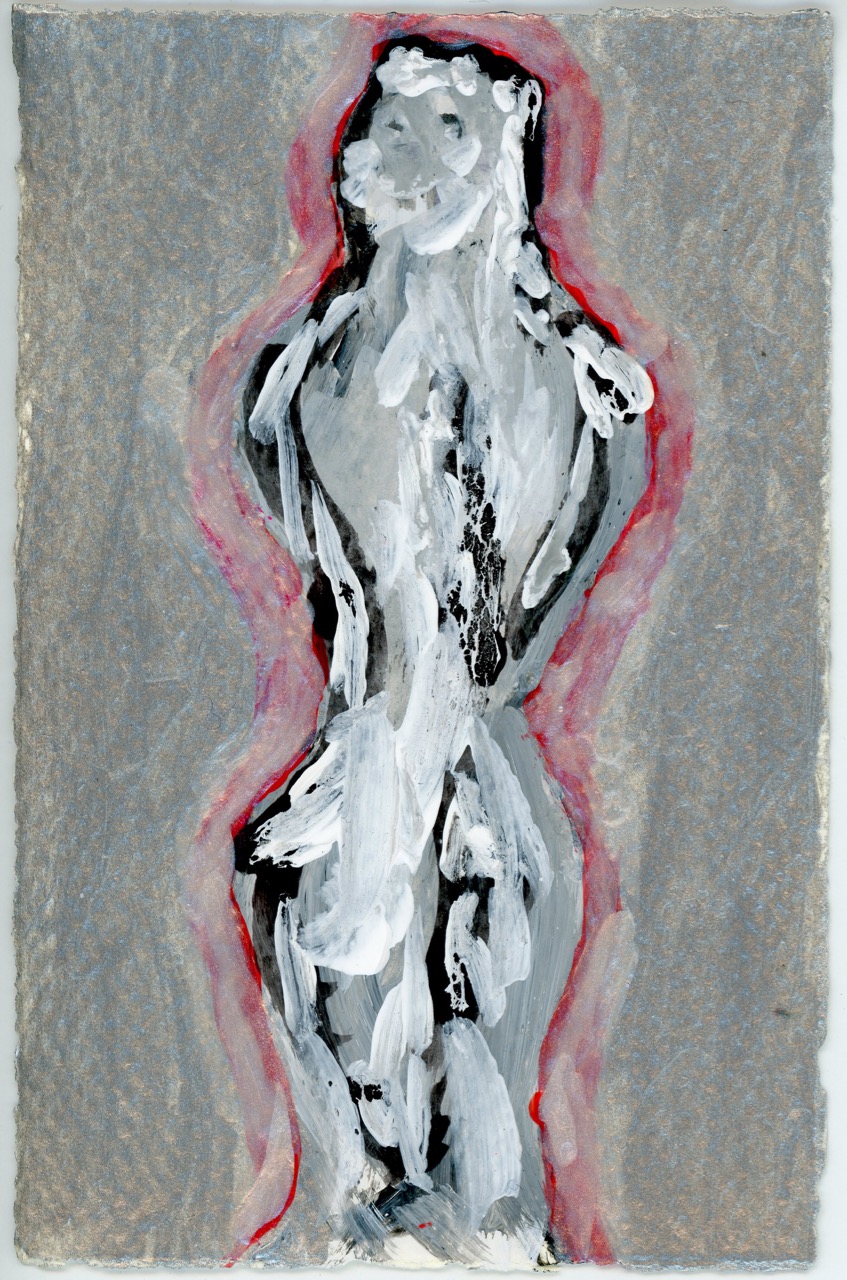 By abstracting the images of these celebrated figures—turning them into silhouettes dotted and striped with cosmetics—Davis renders them into something akin to fetishes or Venus figurines, invoking some ritual of queer ancestor worship. Is she doing a black queer parody of Louise Bourgeois? The installation itself, with a ceiling-mounted rectangular halo of fluorescent light shining on walls painted the drab tan of an archaeological exhibition at a decrepit museum, inspires a hushed connection with each of Davis’s goddesses. Made by another artist, these paintings might not so easily bridge ancient and modern iconography, nor would they seem quite as cheeky and possibly satirical, a poker-faced spoof of the feminist and queer Hollywood diva worship Davis presumably holds dear. 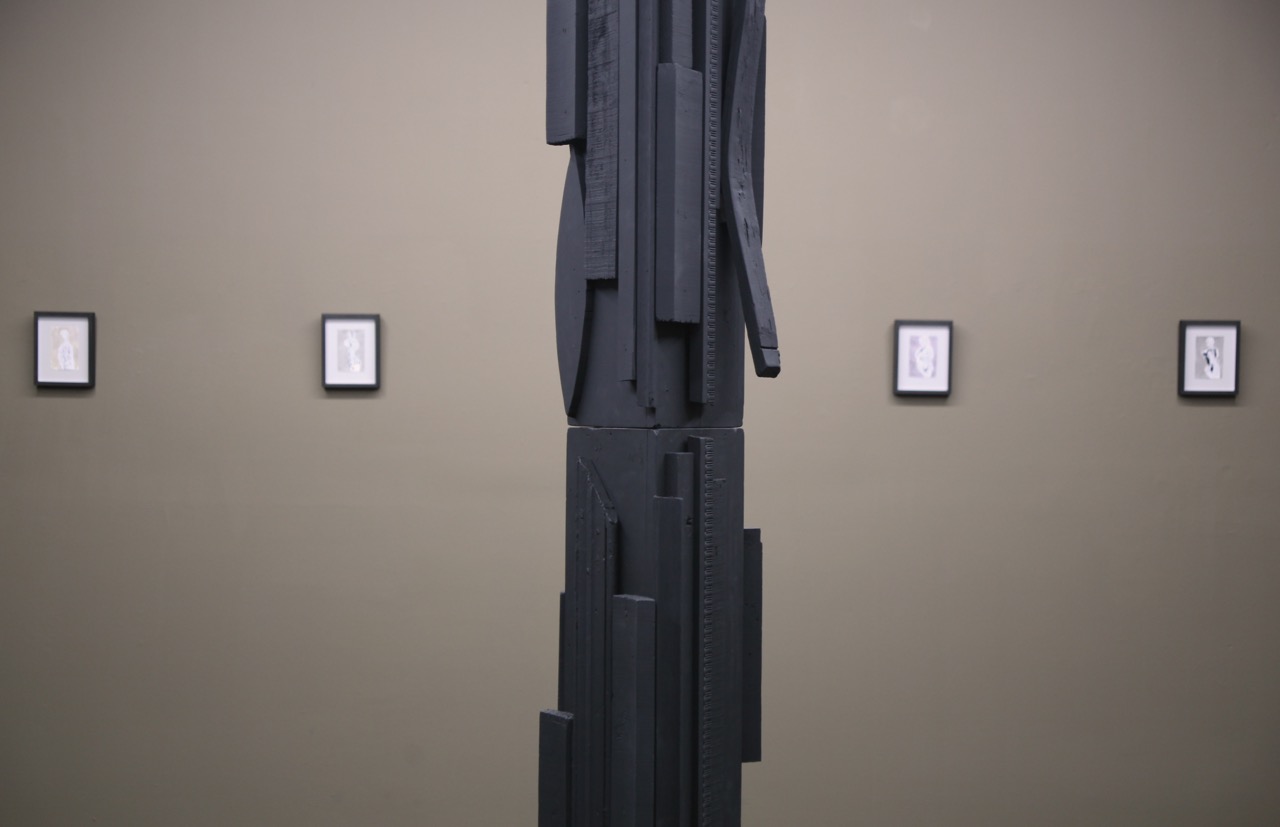 As if to exemplify womanism and lessen the sardonic subtext of Davis’s work, a nine-foot-tall sculpture by the late Louise Nevelson (1899–1988) called Colonne II, from 1959, stands in the center of the room. Colonne II, a triangular obelisk painted a deep matte black, bringing charred firewood to mind, nearly touches the ceiling. When one looks up and sees it under the aforementioned rectangle of light on the ceiling, one naturally thinks at first of the monolith from 2001: A Space Odyssey. And then one may have lewder thoughts. During her lifetime, Nevelson had many strikes against her possible recognition, as a forty-something woman in the mid-twentieth century who made giant collages out of reclaimed wood during a time when the most revered, collected, and famous sculptors were men who assembled large-scale works out of steel. But her reputation grew throughout her career, and many now consider her on the same footing as her male contemporaries.

For an object whose ostensible contribution to Chimera is a celebration of the show’s feminist foundations, Colonne II seems emphatically phallic—but then again, the power of the phallus is masculine but not inherently male. In fact, the show title seems to refer to the definition of “chimera” as an intersexed organism, and/or one containing mixed genes, and thereby to explain, with muted irony, the juxtaposition of female figures encircling Nevelson’s pole. If any artist can discredit our fixed ideas about dicks by the mere presence of her work alongside a nine-foot black johnson made by an old white lady, it’s Vaginal Davis. Or, as she put it earlier this year, in a typically offhanded critique of Lacan, “The penis is, and always was, just one of many substitutes for the dildo. And not, I might add, a particularly reliable or attractive one.”