The 15:17 to Paris, directed by Clint Eastwood

The 15:17 to Paris arrives as Clint Eastwood’s third consecutive movie using recent real-life events to wrestle with the ramifications of American heroism. The previous two centered on meat-and-potatoes movie stars: a bulked-up Bradley Cooper in American Sniper (2014), a white-mustached Tom Hanks in Sully (2016). For Paris, Eastwood has taken the extraordinary step of casting participants from the actual event to reenact both their headline-making bravado aboard Thalys train #9364 and the timeline of their lives that led up to their decisive thwarting, on August 21, 2015, of a terrorist attack.

Throwing himself into this conceptually elevated terrain, Eastwood has returned with one of his weirdest, ungainliest, and most purely humbling movies. The near-nonagenarian director seems a touch out of his comfort zone at various points throughout Paris, whether in staging a propulsively crowded dance scene at an Amsterdam nightclub, or in dealing with his characters’ social-media-ese. But his intermittent deference and indecision is itself moving—a brazen concession to the three young men telling their story for the screen. Watching Spencer Stone, the only member of the trio given anything resembling an arc, work the smoothie station at a Jamba Juice brought to mind the shot of a Sonic sign in Terrence Malick’s To the Wonder (2012)—both instances of a dusty, off-in-the-corner auteur breaking free, if just for a moment, from his standard mode of a more spiritually eternal Americana and flirting with a phase of contemporary awareness. 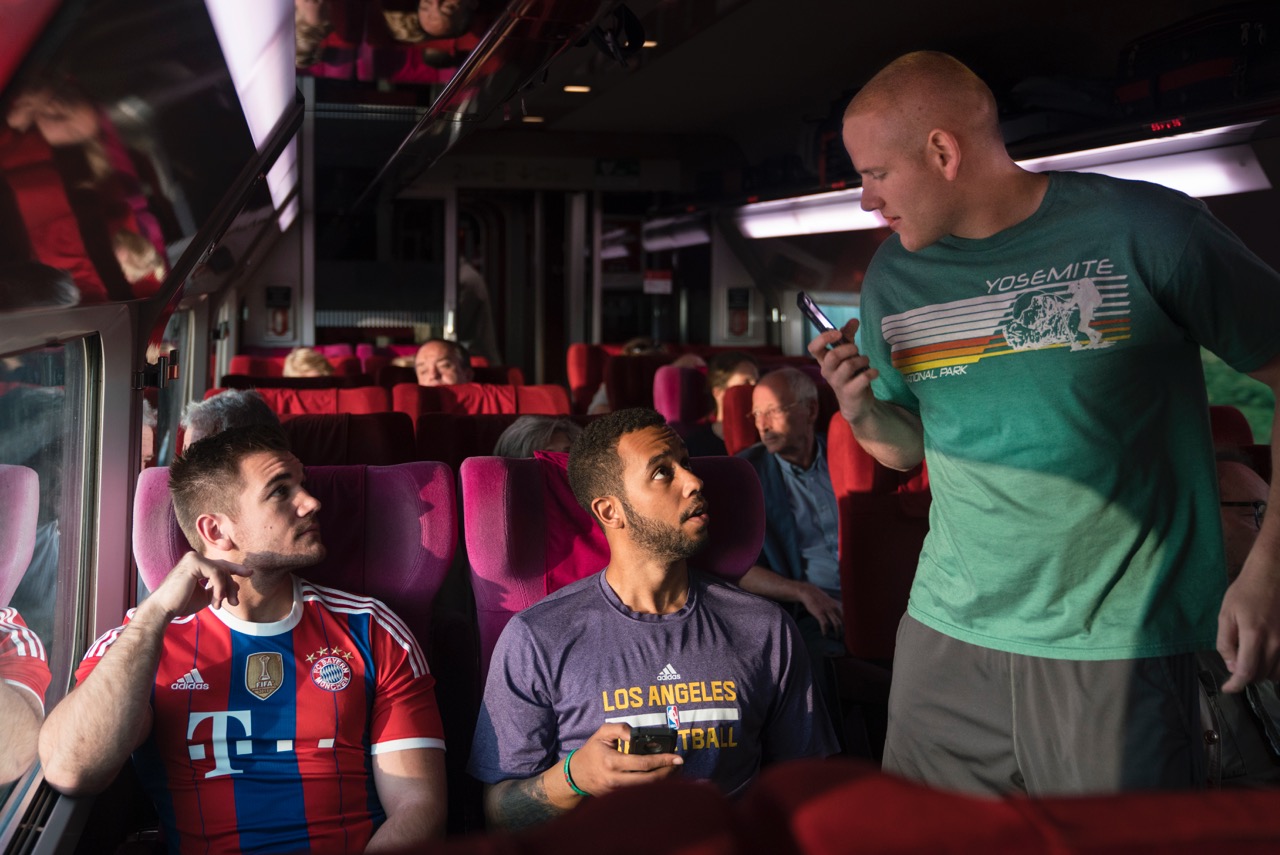 Stone, Anthony Sadler, and Alek Skarlatos, the playing-themselves actors, are introduced at the top via voice-over, but much of the opening chapters recounts their upbringing in mid-2000s Sacramento. (This includes the boys’ overlapping at a tension-filled Christian school, a fact that makes parts of Paris an unexpected sibling to Greta Gerwig’s Lady Bird, also set in the California capital.) Ample stretches here are vintage Eastwood, including the first dramatic encounter: Judy Greer and Jenna Fischer (playing, respectively, the mothers of Stone and Skarlatos) steamrolling a stuffy teacher who asserts that the youngsters’ failing grades might be a result of attention-deficit disorder. “Boys of single moms . . . it’s just statistics,” the instructor scoffs from behind her mighty desk. Watching the moms fight back, and then march out of the room in disgust, hardly differs from watching Eastwood himself rail sarcastically against the bureaucratic dictates dished out by Pat Hingle’s police chief in Sudden Impact (1983). In fact, Stone (played in these youthful years by William Jennings) and Skarlatos (Bryce Gheisar) first befriend Sadler (Paul-Mikél Williams) at that ageless site of budding, grown-ups-suck rebellion: the principal’s office. Eastwood has made a living out of turning authority figures into douchebags, and he has a lot of fun here, enlisting Tony Hale as a couldn’t-care-less gym teacher (“I’m in a mood,” he whines) and Thomas Lennon as a principal with very serious, very professional, very clipped diction.

These glances at American boyhood—including a sequence of the trio playing war in camo-colored attire, the camera craning upward as each of them cheerfully collapses to the grass—are the movie’s most dramatically successful but the least singular, lifted right from the Eastwood playbook. Kids praying in the half-light before bed, moms agonizing over their children’s dreams—this is stuff he has long-honed confidence in depicting. But when the adult-age versions of Stone, Sadler, and Skarlatos emerge, their guileless demeanors take center stage. You can almost sense Eastwood carefully handing the movie to them, like a quarterback holding the pigskin out for his man in the backfield. Suddenly, there are scenes that have no foregrounded dramatic import at all. To remain agile and in shape while striving for promotion within the Air Force, the husky Stone enrolls in a jujitsu class; he’s sort of OK at it. Skarlatos enters the National Guard, gets stationed in Afghanistan, and turns out to be “basically just a mall cop.” Sadler becomes a student at California State University, Sacramento; we don’t hear much about it. Instead, the men share low-key, downtime Skype sessions, or take a load off with beers and college-basketball games.

By the time the movie shifts to the friends’ European trip—the event that led to them being on the Thalys train that day—almost all bets of typical dramatic treatment are off. Eastwood has completed the 180 from the Greer and Fischer scenes, surrendering control and refusing to place a structure on the bros’ touristy dilly-dallying. Sadler wields his beloved selfie stick at every photogenic possibility; Skarlatos takes a girlfriend to a German café that has familial significance; Stone, smoking a cigarette on a rooftop, wonders whether “life is catapulting you toward something,” as if he were auditioning for some future Richard Linklater Before movie. Notoriously economical on set, Eastwood clearly hasn’t spent much energy instructing his leads to more roundly emote; he and his editor, Blu Murray, are about as concerned with clumsy enunciations or banal dialogue as Tony Hale is about his PE students. (The screenplay, by Dorothy Blyskal, was adapted from the book the three men wrote with Jeffrey E. Stern.)

All of this Continental activity doesn’t exactly jump off the screen. But it’s in these menial moments that Eastwood most fully commits to the non-actor project, in the process producing frequently charming results. The handsome Skarlatos is a ball to watch early in the climactic train sequence, helping an elderly gentleman to his seat and, shortly thereafter, alerting his friends with childish glee to the sustenance being wheeled down the aisle (“snacks coming in”). Eastwood renders the attack itself—which he teases throughout to help articulate his theme of destiny—in suspensefully quiet and gruesomely violent terms. Mark Moogalian, another real-life passenger from the train, who sustained a bullet wound to the neck, also appears as himself, leaking a pool of blood on the carpeted train floor. Ray Corasani plays the assailant, Ayoub el Khazzani, whom Eastwood portrays in sly, B-movie-villain-like fashion: a close-up on his suitcase here, a tight shot of his sneakers there. As in Sully, Eastwood places the emphasis not only on the heroics of his main characters but on the collective efforts that were required by dozens of others—like the emergency medics who surfaced in time to treat Moogalian before he bled out entirely.

What’s most missing from Paris is the sense of a complete reckoning. Sniper and Sully were such complicated movies because their most potent passages were examinations of aftermath—the nagging, lingering nightmares that can accompany even those acts of heroism as seemingly straightforward as the “Miracle on the Hudson.” (Both lent significant attention to their hero’s PTSD-like psychological tailspins in the wake of their exploits.) Here, the men initiate a brave act, are thanked the world over, and then the movie ends. This trajectory, to be sure, holds worries of its own: these guys are twenty-five, twenty-six, still uncertain about what they’re going to do with their lives. A sense of “where will they go from here?” hangs over the closing scene, which incorporates actual footage of François Hollande, then the president of France, awarding the men the Legion of Honor. But by the end of the movie’s ninety-four minutes, Stone, Sadler, and Skarlatos leave us as likeable strangers. Following this valorization, Stone returned to Sacramento, where, shockingly, he was stabbed and almost killed in a fight; Skarlatos finished in third place on a season of Dancing with the Stars; Sadler graduated last year with a degree in kinesiology. Considering any of these developments might have expanded the scope of their onscreen characterizations. As it stands, The 15:17 to Paris marks a partially squandered, partially fulfilled detour from a dyed-in-the-wool director—an offbeat, mysterious curveball we neither needed nor deserved.

Danny King is a senior associate editor at the Village Voice. His writing has also appeared in the A.V. Club, the Brooklyn Rail, and Reverse Shot, among other publications.