Film
The Old Man & the Gun 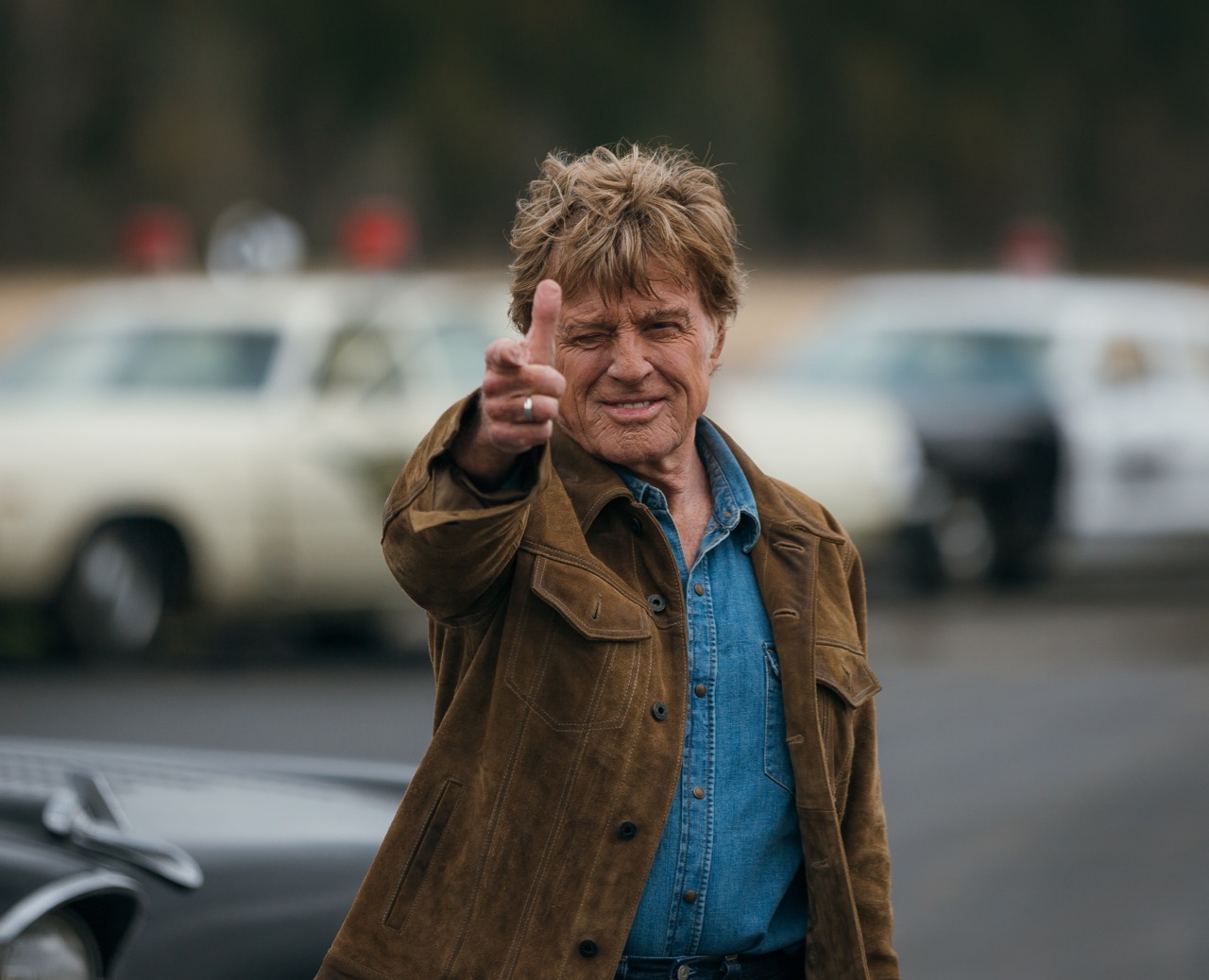 The Old Man & the Gun, written and directed by David Lowery

Ever since St. Nick (2009), his debut feature about preadolescent siblings shacking up in dilapidated houses throughout rural Texas, the writer-director David Lowery has been refining a sensibility of childlike wonder. At the conclusion of St. Nick, the credits identify the main characters simply as “the Boy” and “the Girl”; Lowery’s subsequent Ain’t Them Bodies Saints (2013) sets the stage for its story of outlaw lovers with a fancifully vague title card that reads, “This was in Texas.” The names of several of Lowery’s movies—including A Ghost Story (2017) and his latest, The Old Man & the Gun—sound like tall tales a parent might recite to a toddler near an atmospheric source of light. Sure enough, Lowery’s short Pioneer (2011) concerns itself with precisely this action: its sixteen minutes unfold in a bedroom bathed in benign golden-green hues, as a bearded dad (Will Oldham) spins an increasingly fantastical narrative of century-spanning family history to his sleepily enraptured four-year-old (Myles Brooks). There is an attempt, across these works, to summon a magical feeling of storybook gullibility.

Where does The Old Man & the Gun, a fact-based chronicle of the improbably steadfast lifelong criminal and bank robber Forrest Tucker, fall into this zone of make believe? Adapted by Lowery from a 2003 New Yorker profile of Tucker by David Grann, the movie marks Lowery’s initiation into the full-fledged star vehicle. In Robert Redford—still spry and mischievously charming at eighty-two, and carrying with him a legacy of devil-may-care characters who break the law or skirt the rules, often with the aid of a sterling mop of golden hair—Lowery has located a dashing actor to bring Tucker to life. The pair previously collaborated on Lowery’s Disney foray, Pete’s Dragon (2016), in which Redford (here in a strictly supporting capacity) regales a circle of wide-eyed children with accounts of a creature said to live deep in the forest. If that tableau of mystical, intergenerational storytelling finds Redford sliding seamlessly into Lowery’s world, The Old Man & the Gun exemplifies something a shade nearer to an actor-as-auteur endeavor, complete with a quick quotation from the Redford canon: Lowery enlivens one sequence with recycled footage of the young Redford fleeing the authorities in The Chase (1966). (In the lead-up to the release of The Old Man & the Gun, Redford has announced his retirement from acting.) 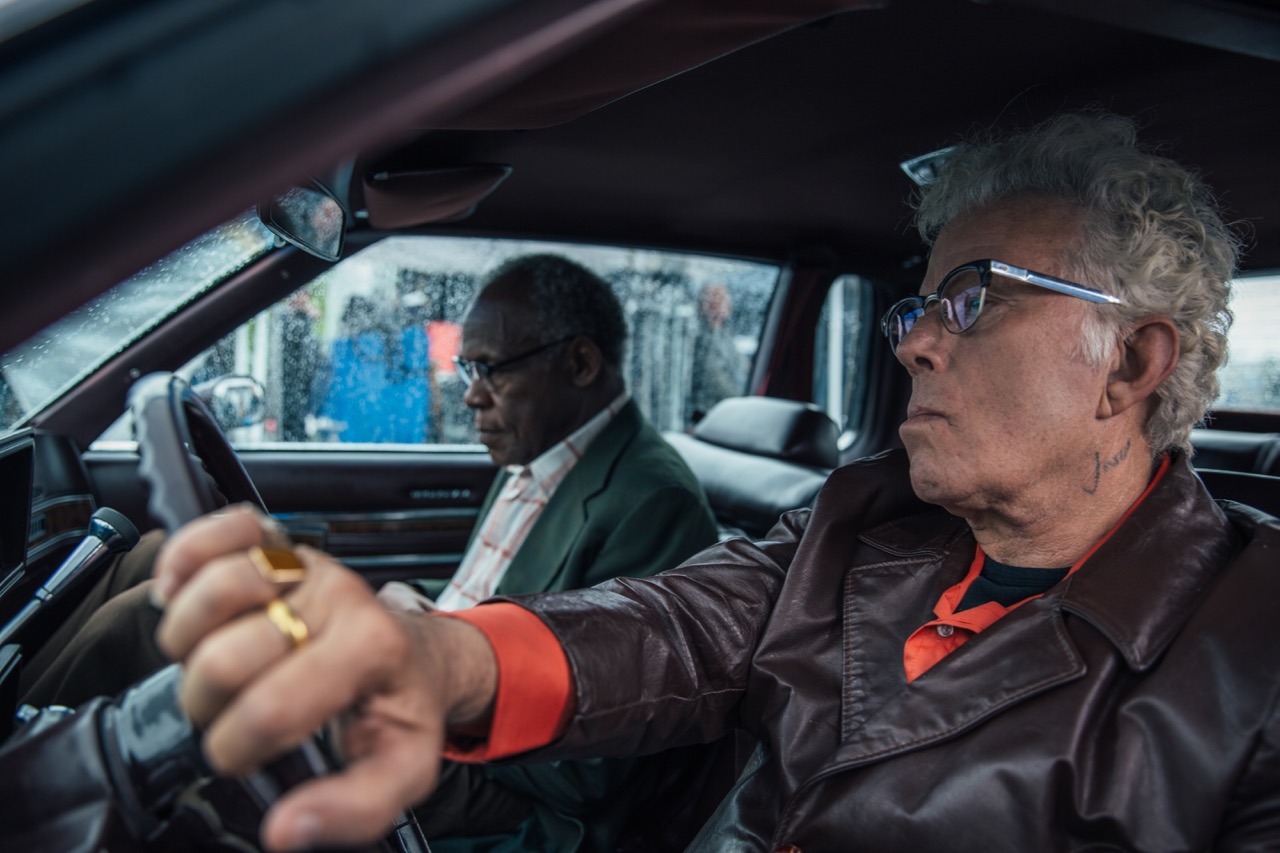 This isn’t to suggest that Redford alone carries the movie, or that Lowery, in conceiving and executing Tucker’s tale, hasn’t made a series of intelligent and idiosyncratic decisions. For starters, Grann’s article describes not only the story of an old man but also years of run-ins with the law. “Over a career that spanned more than six decades,” Grann writes, Tucker “had . . . become perhaps the greatest escape artist of his generation, a human contortionist who had broken out of nearly every prison he was confined in.” Many of these contortions—reaching all the way back to Tucker’s success at sawing through cell bars as a teenager in the 1930s—read like catnip for a crime-minded director. Processing Grann’s account of Tucker and his conspirators’ escape by boat from San Quentin, one might be tempted to picture the Michael Mann version of this saga, with hypnotically drawn-out, process-minded shots of Tucker in the prison workshop, fastening every scrap of the kayak into place. But Lowery’s movie neither focuses on this kind of nitty-gritty nor delivers a life-spanning portrait of a criminal in the rise-then-fall mold. Lowery restricts nearly all of Tucker’s dazzling escapes to a fast-moving montage near the end; aside from momentary flashbacks or periodic mug shots of a more junior Redford, the movie takes place almost exclusively in a single year, 1981, over the course of which Tucker and two similarly aged bandits—Teddy (Danny Glover) and Waller (a sublimely out-of-breath Tom Waits)—pull off a string of successful bank robberies, mainly in Texas but occasionally in surrounding states. (Their exploits earn them the nickname “The Over-the-Hill Gang.”) 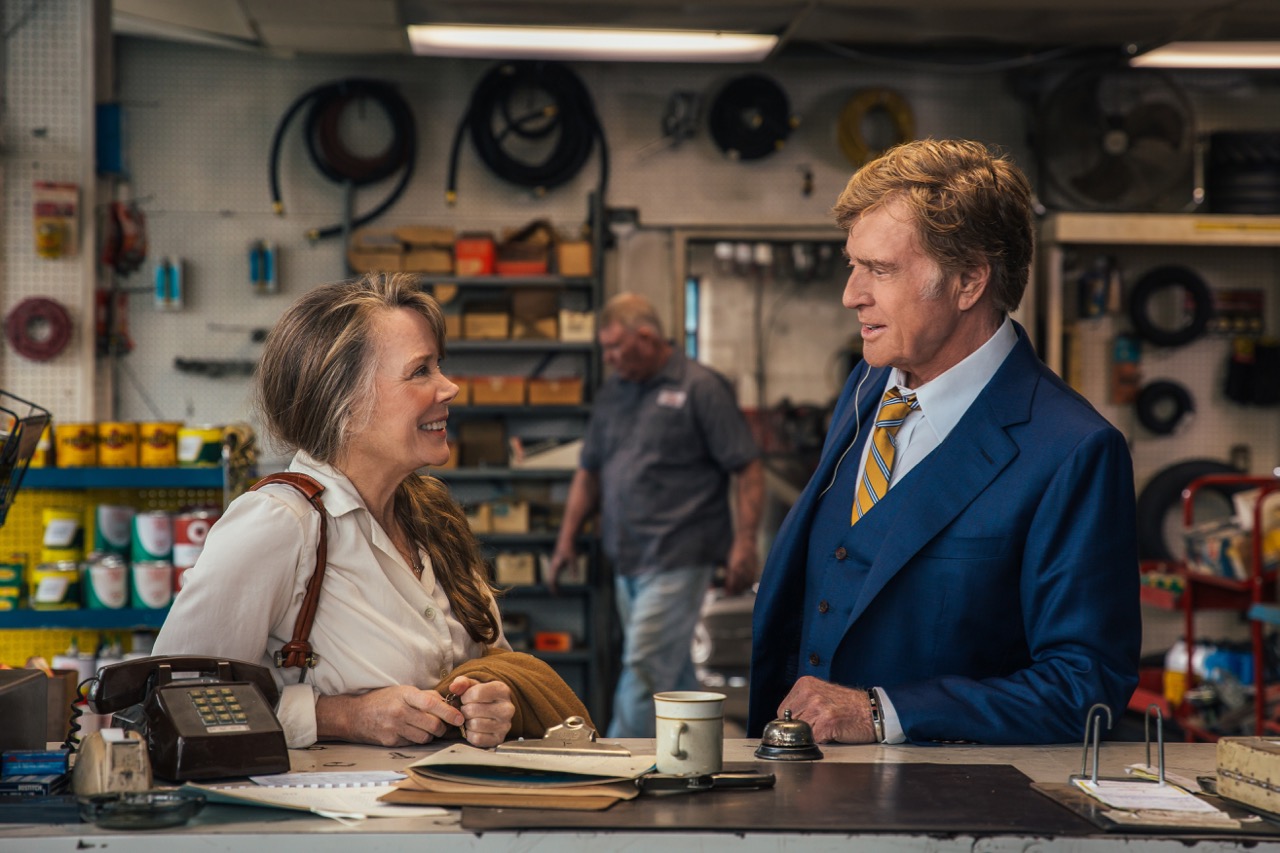 That Lowery leaves so much to the imagination—that he adores Tucker and enjoys being around him but refuses to explain him—is perhaps the movie’s greatest virtue. Tucker, frankly, never says much of anything about himself. The earliest biographical nuggets he offers—that he’s a salesman called Bob Callahan—are lies intended to preserve his chances at romancing Jewel (Sissy Spacek), a widowed rancher he meets on the side of the highway. It seems like half the movie flies by before Teddy or Waller says the name “Forrest” for the first time. We get to know Redford’s character through his grin and bright manner and gleaming blue suit, but we learn the hard facts of his life indirectly, from sources pursued and questioned by the Texas-based detective on Tucker’s trail, the appropriately surnamed John Hunt (Casey Affleck). A lawyer from Tucker’s past shares with Hunt old boxes of files and recollections of the outlaw’s charisma. A long-lost daughter (Elisabeth Moss) smokes a cigarette and remembers what she can of her absent father. 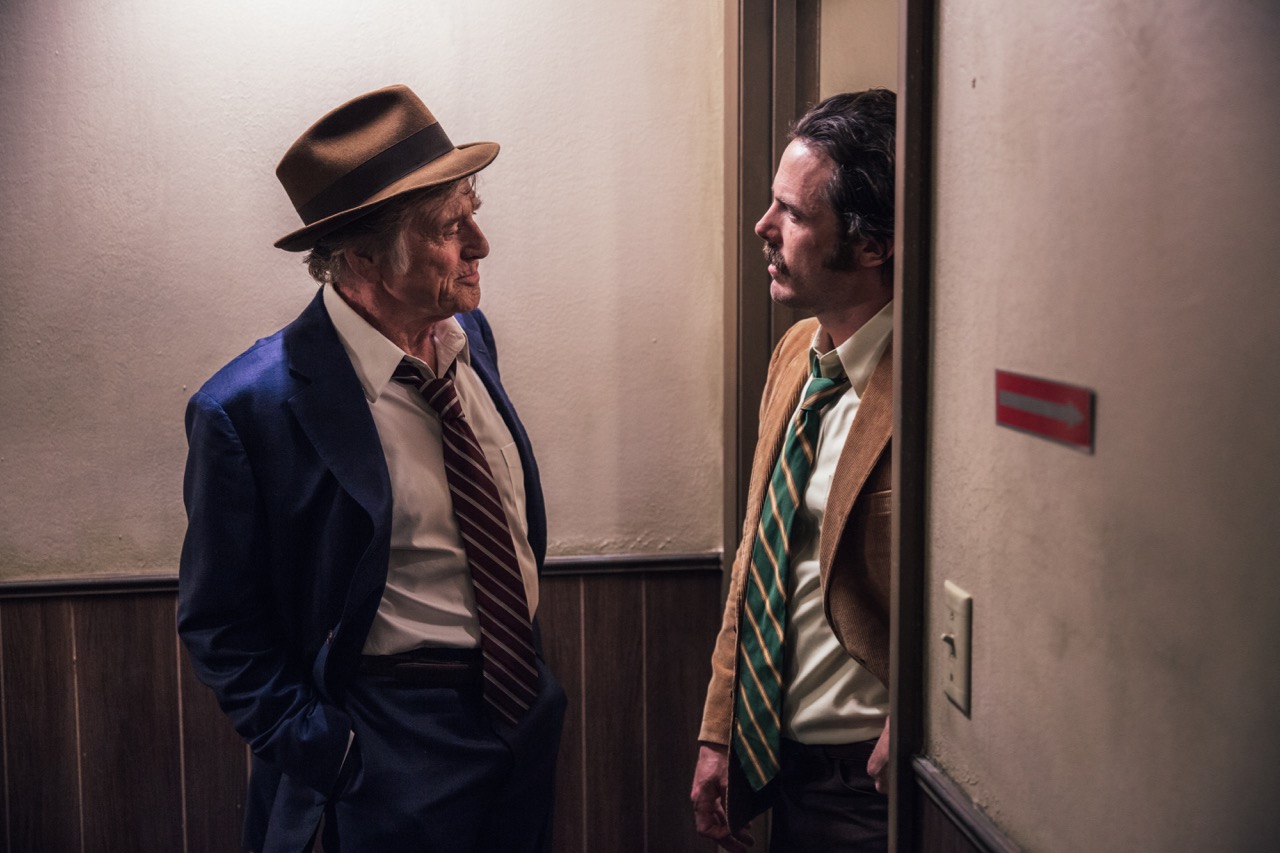 Lowery introduces a sulking Hunt on his fortieth birthday, as his police-department comrades present him with a lone cupcake. Affleck puts forth an astutely muted performance of midlife malaise: twisting his mustache, twirling a bottle cap, staring blankly into the distance. Lowery uses this character as a despondent contrast to Tucker, but also as a means to embed into the movie his signature childlike tenor. Hunt’s two kids, Abilene (Ari Elizabeth Johnson) and Tyler (Teagan Johnson), take an active interest in their dad’s work. In one scene, they help Hunt place red pins on a map to indicate Tucker’s geographical steps. Once it becomes clear that Tucker and his gang are freely crossing state lines, the familiar narrative beat of the feds coming in and intruding on a local investigation is conveyed not through Hunt’s venting to his colleagues or his spouse (Tika Sumpter), but through his discussing the matter off-the-cuff with his children. As Hunt fixes a tire, Abilene reassures him, articulating a fascination with the chase and her father’s role in it. Later, when Hunt arrives home after finally discovering Tucker’s identity, he goes straight to his children’s room and contentedly peeks in on them sleeping.

Hunt’s children also factor into the most bravura sequence of The Old Man & the Gun: a tremendously paced rainy-day robbery in which Lowery balances Tucker’s gentle talking-down of a frightened bank manager with the coincidental presence of Hunt in the teller’s line, unaware of the heist taking place and entertaining a bored Tyler with a story about a frog. (Lowery and cinematographer Joe Anderson shot the movie on Super 16mm, the washed-out textures of which lend wonderful character to the careful zooms and wet windshields as Abilene waits outside the bank in the family car.) Tucker evokes the notion of childhood in a heart-to-heart with Jewel on her front porch. In between sips of whiskey, he thinks back to himself as a little boy and speculates about whether that kid would be proud of the person he is today. He doesn’t offer a definitive answer, but surely the smiles he flashes throughout the movie—even in high-pressure car chases with the cops right on his heels—suggest a measure of happiness. His is indeed a great story to tell, one whose highs and lows and myths fit snugly into the David Lowery milieu, where bleak realities go down like before-bed yarns.

Danny King is a writer based in New York. His work has appeared in the A.V. Club, the Brooklyn Rail, the Village Voice, and Reverse Shot, among other publications.